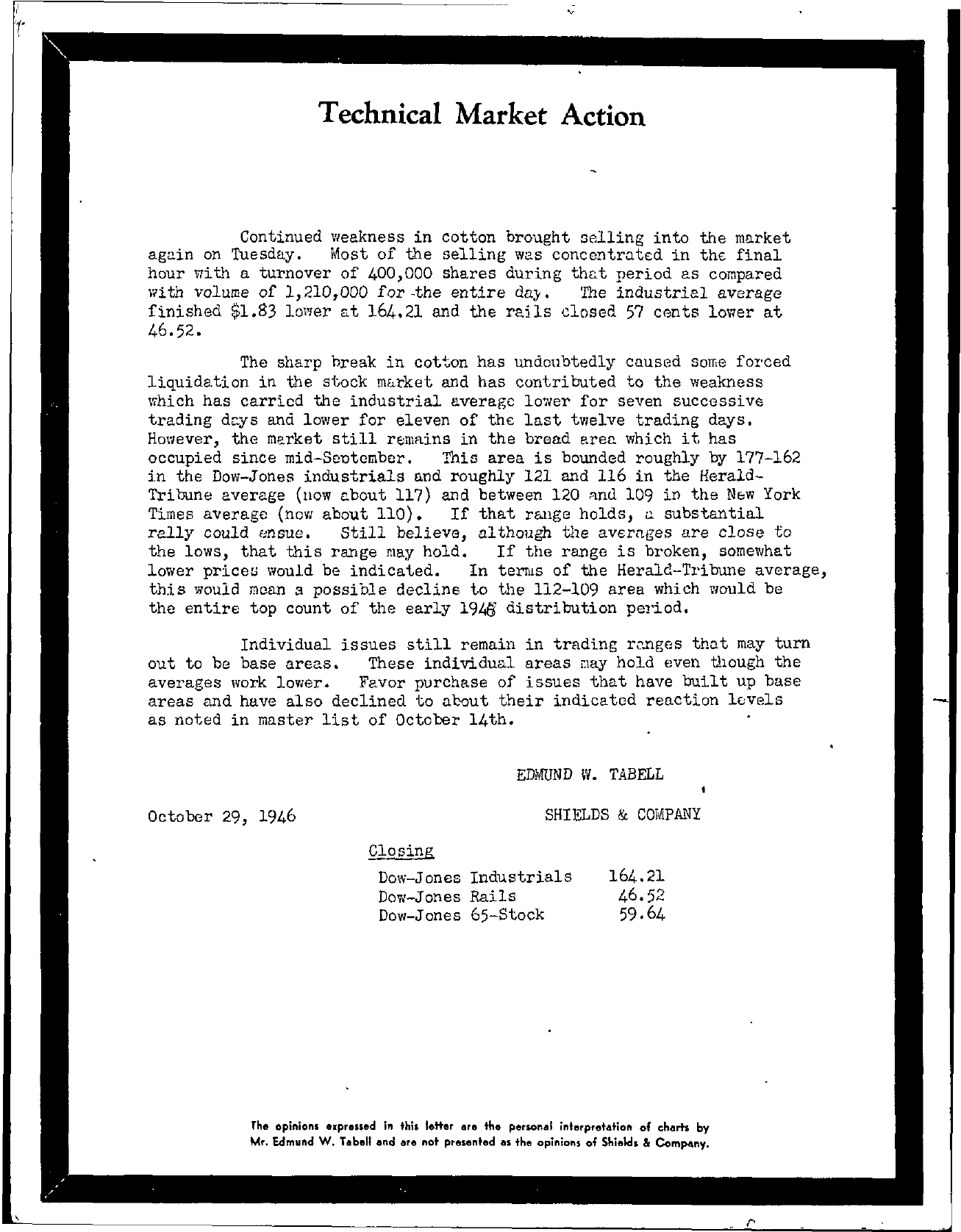 Technical Market Action Continued weakness in cotton brought selling into the market agdn on Tuesday. Most of the selling was concentro.t8d in thE final hour with a turnover of 400,000 shares during that period as compared with volume of 1,210,000 for -the entire dll;Y. The industrial average finished 1.83 lower at 164.21 and the ralls closed 57 cents lower at 46.52. The sharp hreak in cotton has undoubtedly caused some forced liquidation in the stock murket and has contributed to the weakness which has carried the industrial average lower for seven Successive trading days and lower for eleven of the last twelve trading days. However, the market still remnins in the broad arev. which it has occupied since mid-Seotcmber. Thio area is bounded roughly by 177-162 in the Dow-Jones industrials and roughly 121 and 116 in the HeraldTribune average (now v.bout 117) and between 120 nncl 109 in the New York Times average (noVi about 110). If that ra.nge holds, II substantial rally could ensue. Still believe, although the averages are close to the lows, that this range may hold. If the range is hroken, somewhat lower priceu would be indicated. In terms of the Herald-Tribune average, this would mean a possible decline to the 112-109 area which Vlould be the entire top count of the early 19L.8' distribution period. Individual issues still remain in trading rc.ngr.s that may turn out to be base areas. These individual areas ;lay hold even though the averages work lOVier. Favor purchase of issues that have built up base areas and have also declined to about their indicated reaction levels as noted in master list of October 14th. October 29, 1946 EDMUND IV. TABELL SHIELDS & COMPANY Closing Dow-J ones Industrials DOVi-Jones Rails Dow-Jones 65-Stock 164.21 46.52 59.64 The opinions expressed in this letter ore the personal interpretation of charts by Mr. Edmund W. Tabell end ere not presented as the opinions of Shields & Company.