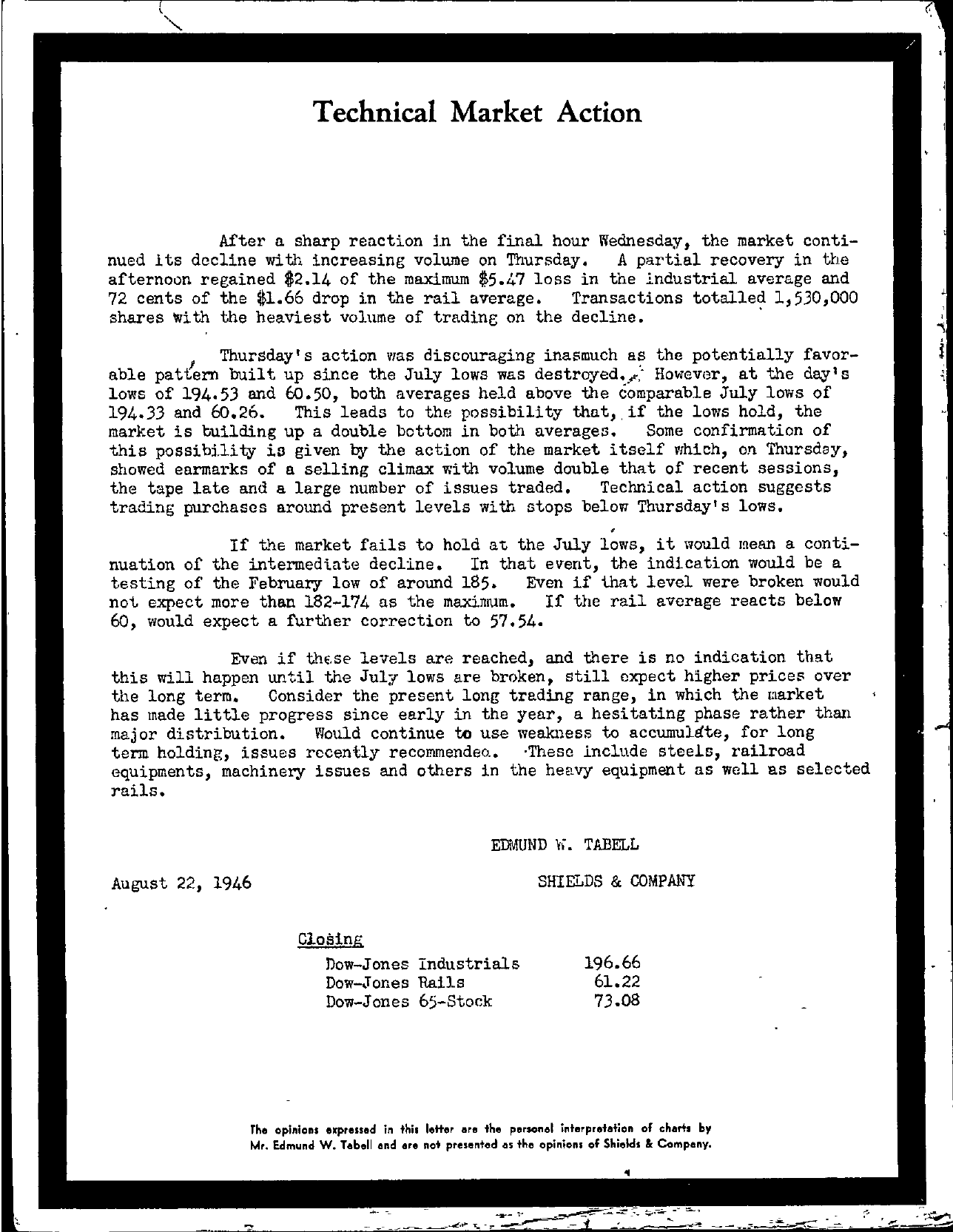 Technical Market Action After a sharp reaction in the final hour Wednesday, the market conti- nued its decline with increasing volume on Thursday. A partial recovery in the afternoon regained 2.14 of the maximum 5.47 loss in the industrial average and 72 cents of the 1.66 drop in the rail average. Transactions totalled 1,530,000 shares \IIi th the heaviest volume of tradine on the decline. . , Thursday's action ViaS discouraging inasmuch as the potentially favorable pattern built up since the July lows was destroyed.,, However, at the day's lows of 194.53 and 60.50, both averages held above the comparable July lows of 194.33 and 60.26. This leads to the possibility that, ,if the lows hold, the market is building up a double bottom in both averages. Some confirmation of this possibility is given by the action of the market itself which, on Thursday, showed earmarks of a selling climax with volume double that of recent sessions, the tape late and a large number of issues traded. Technical action suggests trading purchases around present levels with stops below Thursday's lows. If the market fails to hold at the July lows, it would laean a conti- nuation of the intermediate decline. In that event, the indication would be a testing of the February low of around 185. Even if level were broken would not expect more than 182-174 as the maxinmm. If the rail average reacts below 60, would expect a further correction to 57.54. Even if t.'JE.se levels are reached, and there is no indication that this will happen until the July lows are broken, still expect higher prices over the long term. Consider the present long trading range, in which the market has made little progress since early in the year, a hesitating phase rather than major distribution. Would continue to use weakness to accumulate, for long term holding, issues recently recommendeo.. These include steels, railroad equipments, machinery issues and others in the heavy equipment as well as selected rails. August 22, 1946 EDMUND vi. TABELL SHIELDS & COMPAlfY Closing Pow-Jones Industrials Dow-.Tones Rails Dow-Jones 65-Stock 196.66 61.22 73.08 j The opinions oll'pressed in this letter are the personel interpretation of chart. by Mr. Edmund W. lebell lind ere not presented as the opinions of Shields & Company.