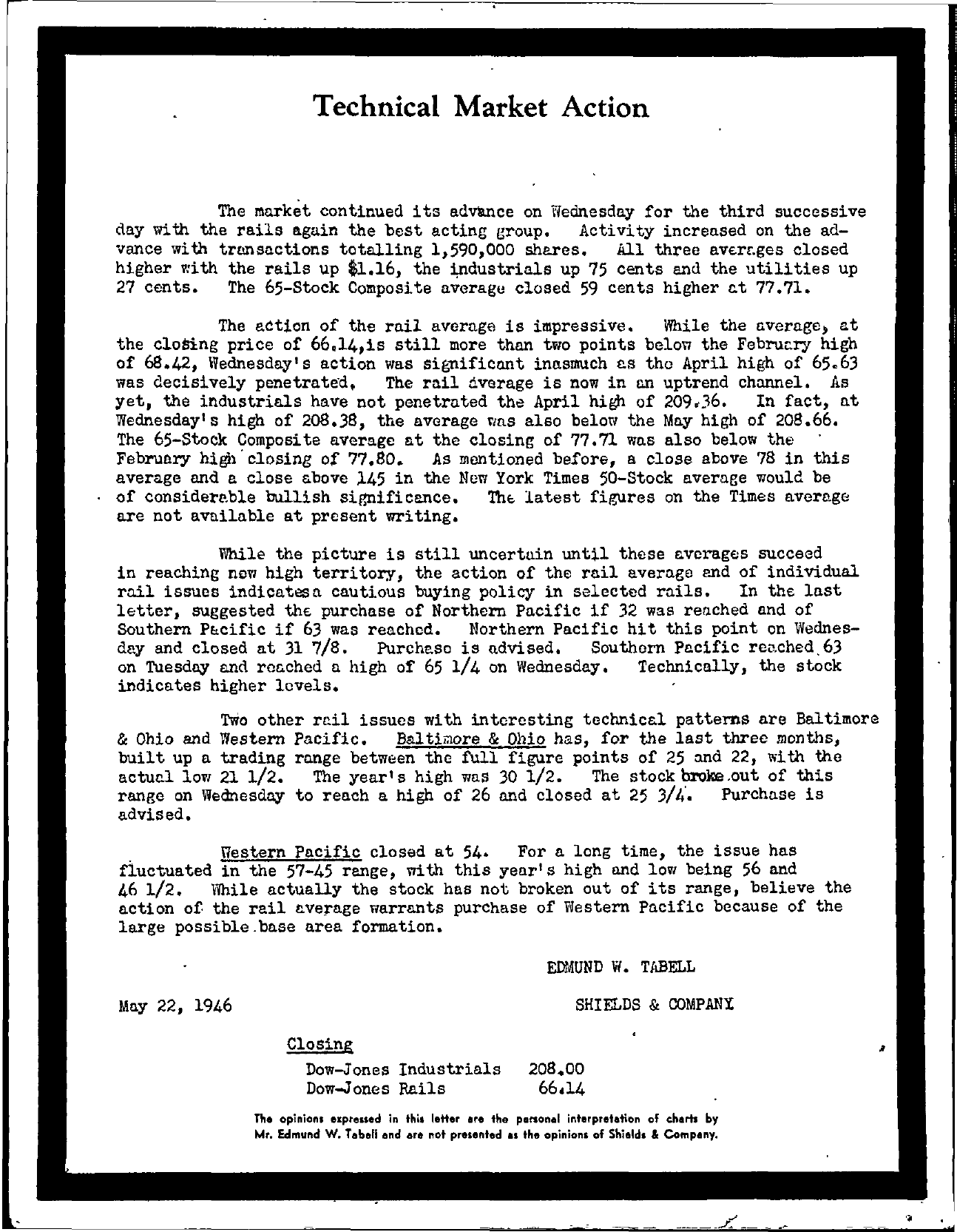 Technical Market Action The market continued its advance on Wednesday for the third successive day with the rails again the best acting group. Activity increased on the advance with transactions totalling 1,590,000 shares. All three averages closed higher with the rails up 1.16, the up 75 cents and the utilities up 27 cents. The 65-Stock Composite average closed 59 cents higher at 77.71. The action of the rail average is impressive. While the average, at the closing price of 66.14,1s still more than two points the February high of 68.42, Wednesday's action was significant inasmuch as the April high of 65.63 was decisively penetrated, The rail average is now in un uptrend channel. As yet, the industrials have not penetrated the April high of 209.36. In fact, at Wednesday's high of 208.38, the average was also below the May high of 208.66. The 65-Stock Composite average at the closing of 77.71 was also below the February high' closing of 77.80. As mentioned before, a close above 78 in this average and a close above 145 in the New York Times 50-Stock average would be of considerable bullish significance. latest figures on the Times average are not available at present writing. While the picture is still uncertain until these averages succeed in reaching new high territory, the action of the rail average and of individual rail issues indicates a cautious buying policy in selected rails. In the last letter, suggested the purchase of Northern Pacific if 32 was reached and of Southern if 63 was reached. Northern Pacific hit this point on Wednesday and closed at 31 7/8. Purchase is advised. Southern Pacific reo.ched.63 on Tuesday and reached a high of 65 1/4 on Wednesday. Technically, the stock indicates higher levels. Two other rail issues with interesting technical patterns are Baltimore & Ohio and Western Pacific. Baltimore & Ohio has, for the last three months, built up a trading range between the full figure points of 25 and 22, with the actual low 21 1/2. The year's high was 30 1/2. The stock broke out of this range on Wednesday to reach a high of 26 and closed at 25 3/4'. Purchase is advised. Western Pacific closed at 54. For a long time, the issue has fluctuated in the 57-45 range, with this year's high and low being 56 and 46 1/2. While actually the stock has not broken out of its range, believe the action of. the rail average warrants purchase of Western Pacific because of the large possible base area formation. May 22, 1946 EDMUND W. TABELL SHIELDS & COMPANY Closing Dow-Jones Industrials Dow-Jones Rails 208.00 66.14 The opinions expressed in this letter are the personal interpretation of charts by Mr. Edmund W. Tabell and are not presented as the opinions of Shields & Company.