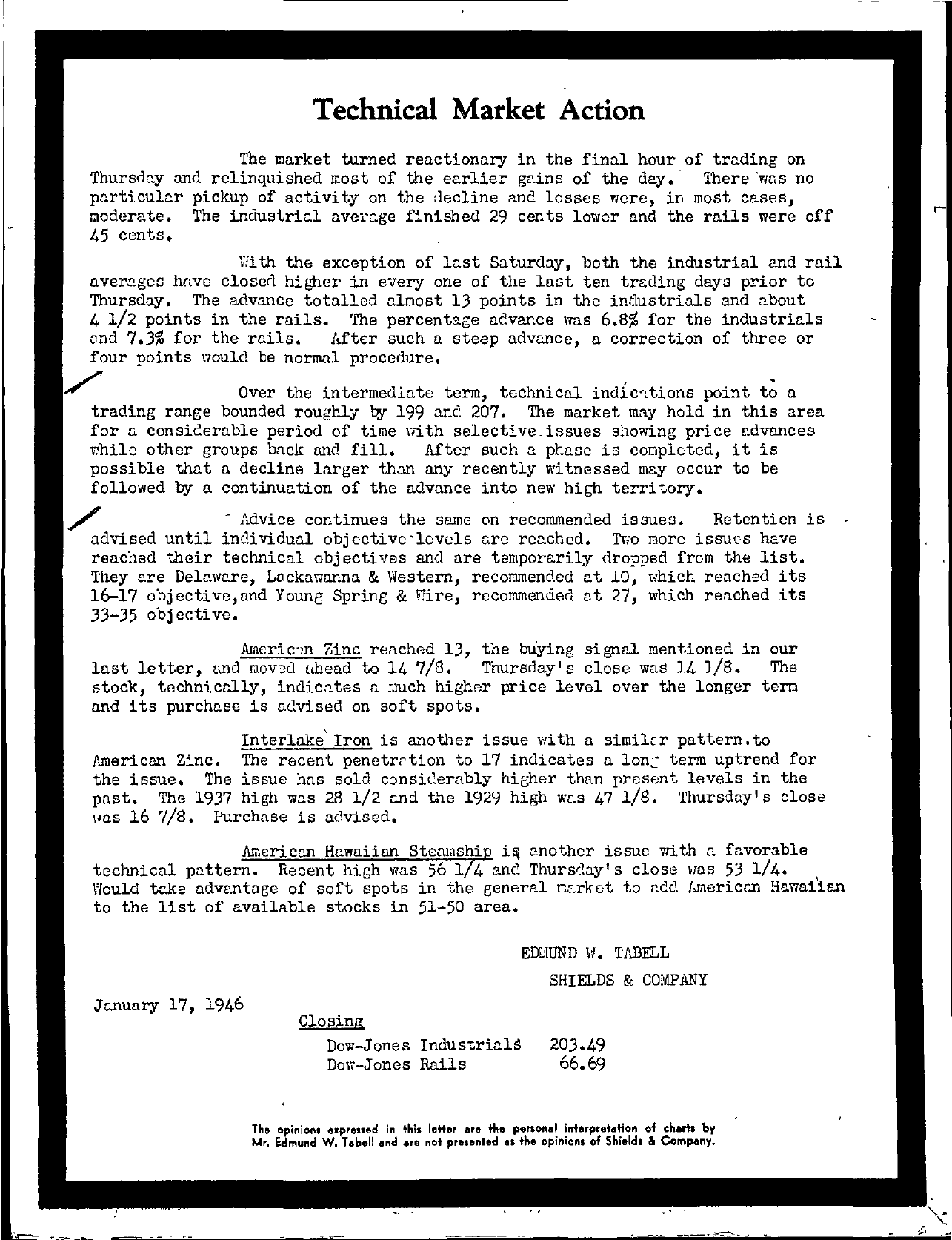 Technical Market Action The market turned reactionary in the final hour of trading on Thursday and relinquished most of the earlier gains of the day. There was no particular pickup of activity on the decline and losses were, in most cases, moderate. The industrial average finished 29 cents lower and the rails were off 45 cents. With the exception of last Saturday, both the industrial and rail averages have closer higher in every one of the last ten tracking days prior to Thursday. The advance totalled almost 13 points in the industrials and about 4 1/2 points in the rails. The percentage advance was 6.8 for the industrials and 7.3 for the rails. After such a steep advance, a correction of three or four points would be normal procedure. Over the intermediate term, technical point to a trading range bounded roughly by 199 and 207. The market may hold in this area for a considerable period of time with selective issues showing price while other groups back and fill. After such a phase is completed, it is possible that a decline larger than any recently witnessed may occur to be followed by a continuation of the advance into new high territory Advice continues the same on recommended issues. Retention is advised until individual objective levels are reached. Two more issues have reached their technical objectives and are temporarily dropped from the list. They are Deluwe, Lncktmanna & Western, recommended at 10, which reached its 16-17 objective, and Young Spring & Wire, recommended at 27, which reached its 33-35 objective. American Zinc reached 13, the buying signal mentioned in our last letter, and moved (,head to 147/8. Thursday's close was 141/8. The stock, technically, indicates a such higher price level over the longer term and its purchase is advised on soft spots. Interlake Iron is another issue with a similar pattern.to American Zinc. The recent penetration to 17 indicates a long term uptrend for the issue. The issue and sold considerably higher than present levels in the past. The 1937 high was 28 1/2 and the 1929 high was 47 1/8. Thursday's close was 16 7/8. Purchase is advised. American Hawaiian Steamship another issue v1i th a favorable technical pattern. Recent high was 56 1 4 and Thursday's close, as 53 1/4. , Would take advantage of soft spots in the general market to add American Hawaiian to the list of available stocks in 51-50 area. January 17, 1946 EDMUND W. TABELL SHIELDS & COMPANY Closing Dow-Jones Industrials Dow-Jones Rnils 203.49 66.69 The opinions expressed in this letter ere the personal interpretation of charts by Mr. Edmund W. Tabell and are not presented as the opinions of Shield. & Company.