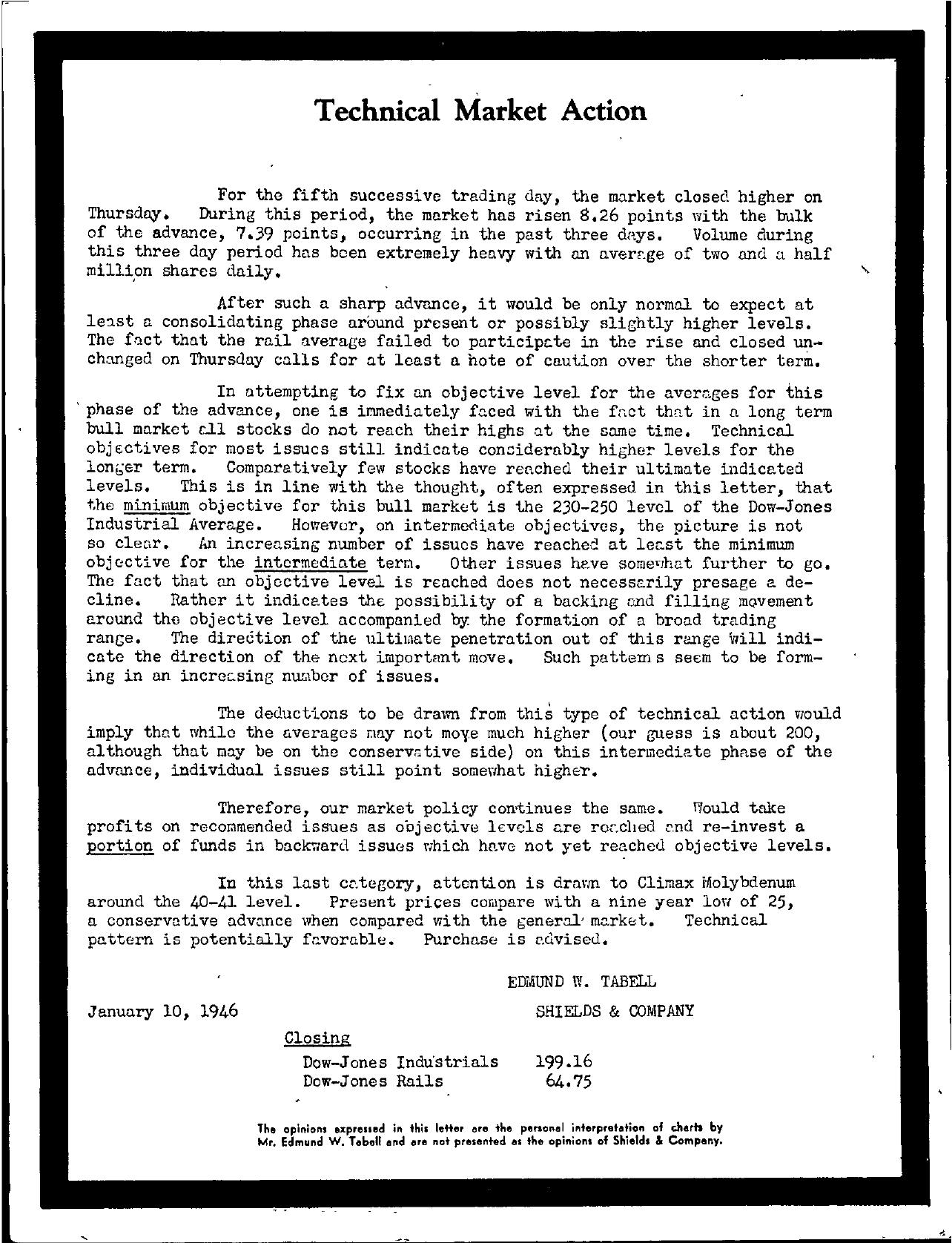 Technical Market Action For the fifth successive trading day, the market closed higher on Thursday. During this period, the market has risen 8.26 points with the bulk of the advance, 7.39 points, occurring in the past three days. Volume during this three day period has been extremely heavy with an avert.ge of two and a half million shares daily. After such a sharp advance, it would be only normal to expect at a consolidating phase around present or possibly slightly higher levels. The fact that the rail average failed to participate in the rise and closed un- changed on Thursday calls for at least a note of caution over the shorter term. In attempting to fix an objective level for the averages for this , phase of the advance, one is immediately faced with the fact that in a long term bull market stocks do not reach their highs at the same time. Technical objectives for most issues still indicate considerably higher levels for the longer term. Comparatively few stocks have reached their ultimate indicated levels. This is in line with the thought, often expressed in this letter, that the minimum objective for this bull market is the 230-250 level of the Dow-Jones Industrial Average. However, on intermediate objectives, the picture is not so clear. An increasing number of issues have reached at least the minimum objective for the intermediate terI!. Other issues have somewhat further to go. The fact that an objective level is reached does not necessarily presage a decline. Rather it indicates the possibility of a backing and filling movement around the objective level accompanied by. the formation of a broad trading range. The direction of the ultimate penetration out of this range will indicate the direction of the next important move. Such patterns seem to be forming in un increasing number of issues. The deductions to be drawn from this type of technical action would imply that while the averages really not move much higher (our guess is about 200, although that may be on the conserv8tive side) on this intermediate phase of the advance, individual. issues still point somel1hat higher. Therefore, our market policy continues the same. would take profits on recommended issues as objective levels are reconciIed and re-invest a portion of funds in backward issues which have not yet reached objective levels. In this last category, attention is drawn to Climax around the 40-41 level. Present prices compare with a nine year low of 25, a conservative advance when compared with the general.' market. Technical pattern is potentially favorable. Purchase is advised. January 10, 1946 EDI.\UND W. TABFLL SHIELDS & COMPANY Closing Dow-Jones Industrials Dow-Jones Rails 199.16 64.75 The opinions expressed in this letter ore the personal interpretation of charts by Mr. Edmund W. Tabell end are not presented as the opinions of Shield. & Company.