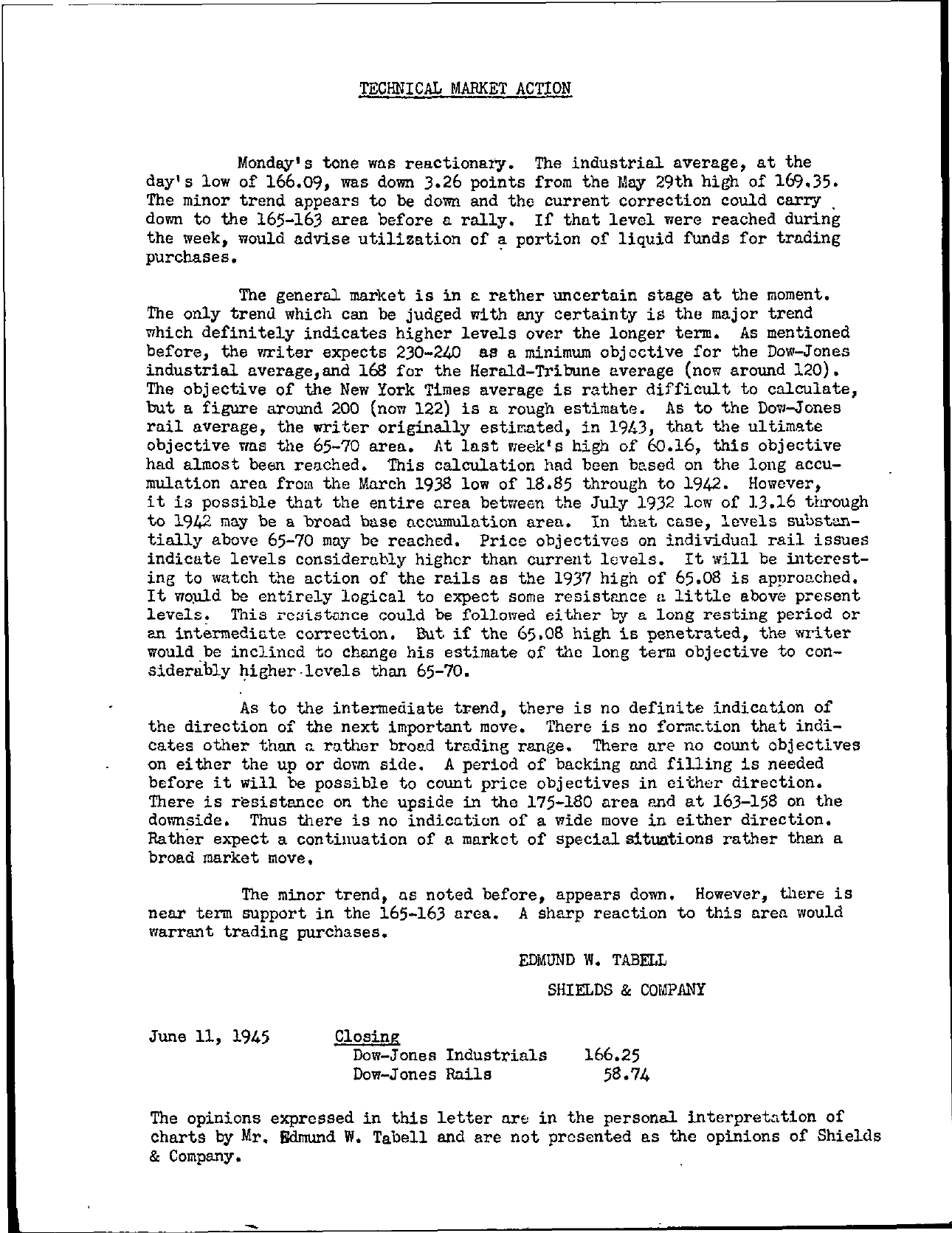 TECHNICAL MARKET ACTION Monday's tone was reactionary. The industrial average, at the day's low of 166.09, was down 3.26 points from the May 29th high of 169.35. The minor trend appears to be down and the current correction could carry down to the 165-163 area before a rally. If that level were reached during the week, would advise utilization of a portion of liquid funds for trading purchases. The general market is in e rather uncertain stage at the moment. The only trend which can be judged with any certainty is the major trend which definitely indicates higher levels over the longer term. As mentioned before, the writer expects 230-240 as a minimum objective for the Dow-Jones industrial average, and 168 for the Herald-Tribune average (now around 120). The objective of the New York Times average is rather difficult to calculate, but a figure around 200 (now 122) is a rough estimate. As to the Dow…Jones rail average, the writer originally in 1943, that ultimate objective was the 65-70 area. At last week's high of 60.16, this objective had almost been reached. This calculation had been based on the long accumulation area from the March 1938 low of 18.85 through to 1942. However, it is possible that the entire area between the July 1932 low of 13.16 through to 1942 may be a broad base accumulation area. In that case, levels substantially above 65-70 may be reached. Price objectives on individual rail issue indicate levels considerably higher than current levels. It will be interesting to watch the action of the rails as the 1937 high of 65.08 is approached. It would be entirely logical to expect some resistance little above present levels. this could be followed either by a long resting period or an intermediate correction. But if the 65.08 high is penetrated, the writer would be inclined to change his estimate of the long term objective to considerably higher levels than 65-70. As to the intermediate trend, there is no definite indication of the direction of the next important move. There is no form action that indicates other than a rather broad trading range. There are no count objectives on either the up or side. A period of backing and filling is needed before it will be possible to count price objectives in either direction. There is resistance on the upside in the 175-180 area and at 163-158 on the downside. Thus there is no indication of a wide move in either direction. Rather expect a continuation of a market of special situations rather than a broad market move. The minor trend, as noted before, appears down. However, there is near term support in the 165-163 area. A sharp reaction to this area would trading purchases. EDMUND W. TABELL SHIELDS & COMPANY June 11, 1945 Closing Dow-Jones Industrials Dew-Jones Rails 166.25 58.74 The opinions expressed in this letter in the personal interpretation of charts by Mr. Edmund W. Tabell and are not presented as the opinions of Shields & Company.