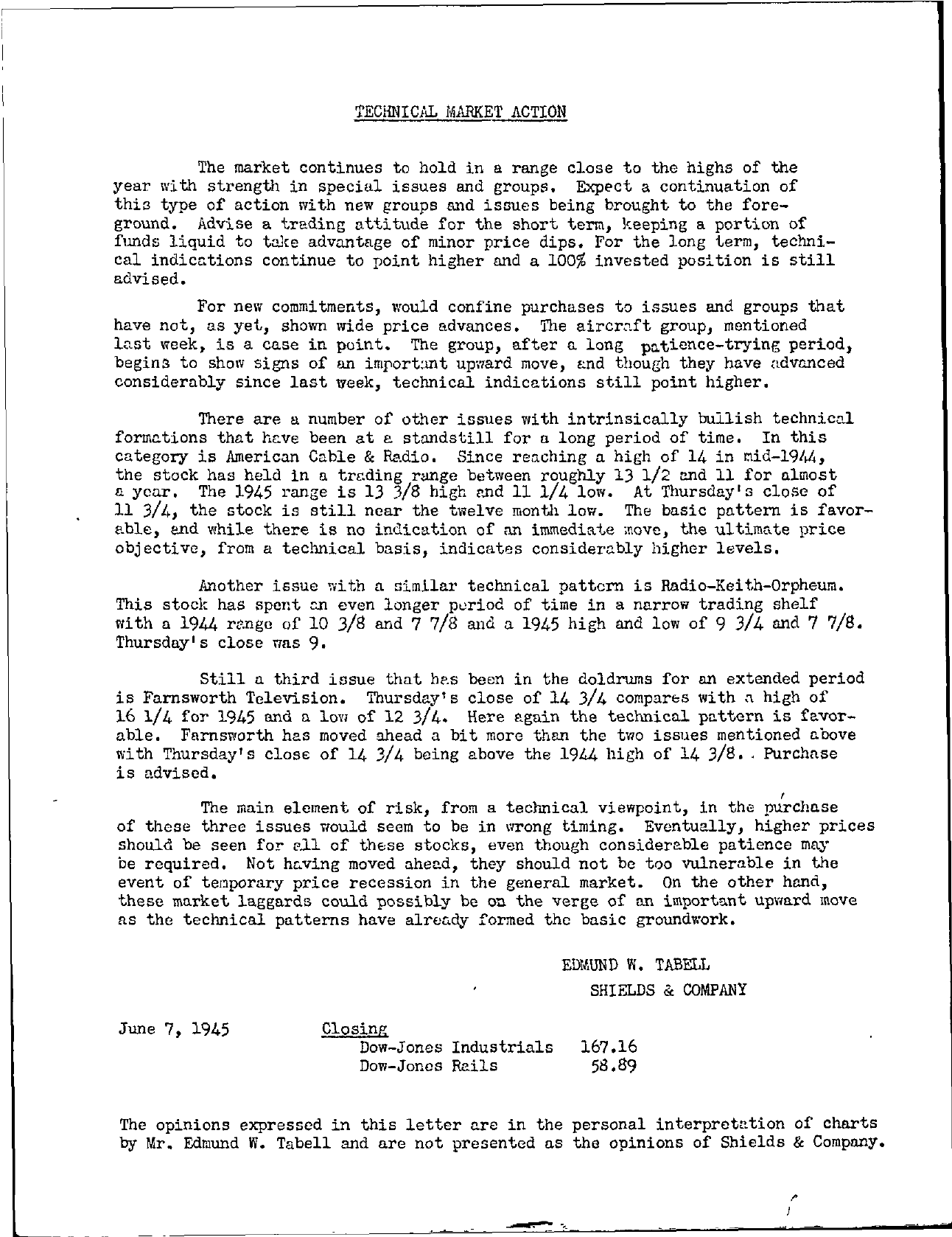 TECHNICAL MARKET ACTION The market continues to hold in a range close to the highs of the year with strength in special issues and groups. Expect a continuation of this type of action with new groups and issues being brought to the fore- ground. Advise a trading attitude for the short term, keeping a portion of funds liquid to advantage of minor price dips. For the long term, technical indications continue to point higher and a 100 invested position is still advised. For new commitments, would confine purchases to issues and groups that have not, as yet, shown wide price advances. The group, mentioned last week, is a case in point. The group, after a long period, begins to show Signs of an important upward move, end though they have advanced considerably since last week, technical indications still point higher. There are a number of other issues with intrinsically bullish technical. that have been at e standstill for a long period of time. In this category is American Cable & Radio. Since reaching a high of 14 in r.lid-19M the stock has held in a trading range between roughly 13 1/2 and 11 for almost a year. The 1945 range is 13 3/8 high end 111/4 low. At Thursday's close of 11 3/4, the stock is still near the twelve month low. The basic pattern is favorable, and while there is no indication of an immediate move, the ultimate price objective, from a technical basis, indicates considerably higher levels. Another issue with a similar technical pattern is Radio-Keith-Orpheum. This stock has spent xl even longer period of time in a narrow trading shelf with a 1944 of 10 3/8 and 7 7/8 and a 1945 high and low of 9 3/4 and 7 7/8. Thursday's close was 9. Still a third issue that has been in the doldrums for an extended period is Farnsworth Television. Thursday's close of 14 3/4 compares with high of 16 1/4 for 1945 and a low of 12 3/4. Here again the technical pattern is favorable. Farnsworth has moved ahead a bit more than the two issues mentioned above with Thursday's close of 14 3/4 being above the 1944 high of 14 3/8 . Purchase is advised. The main element of risk, from a technical viewpoint, in the purchase of these three issues would seem to be in wrong timing. Eventually, higher prices should be seen for of te8se stocks, even though considerable patience may be required. Not having moved ahead, they should not be too vulnerable in the event of temporary price recession in the general market. On the other hand, these market laggards could possibly be on the verge of un important upward move as the technical patterns have already formed the basic groundwork. June 7, 1945 EDMUND W. TABELL SHIELDS & COMPANY Closing Dow-Jones Industrials Dow-Jones Rails 167.16 58.89 The expressed in this letter are in the personal interpretation of charts by Mr. Edmund W. Tabell and are not presented as the opinions of Shields & Company.