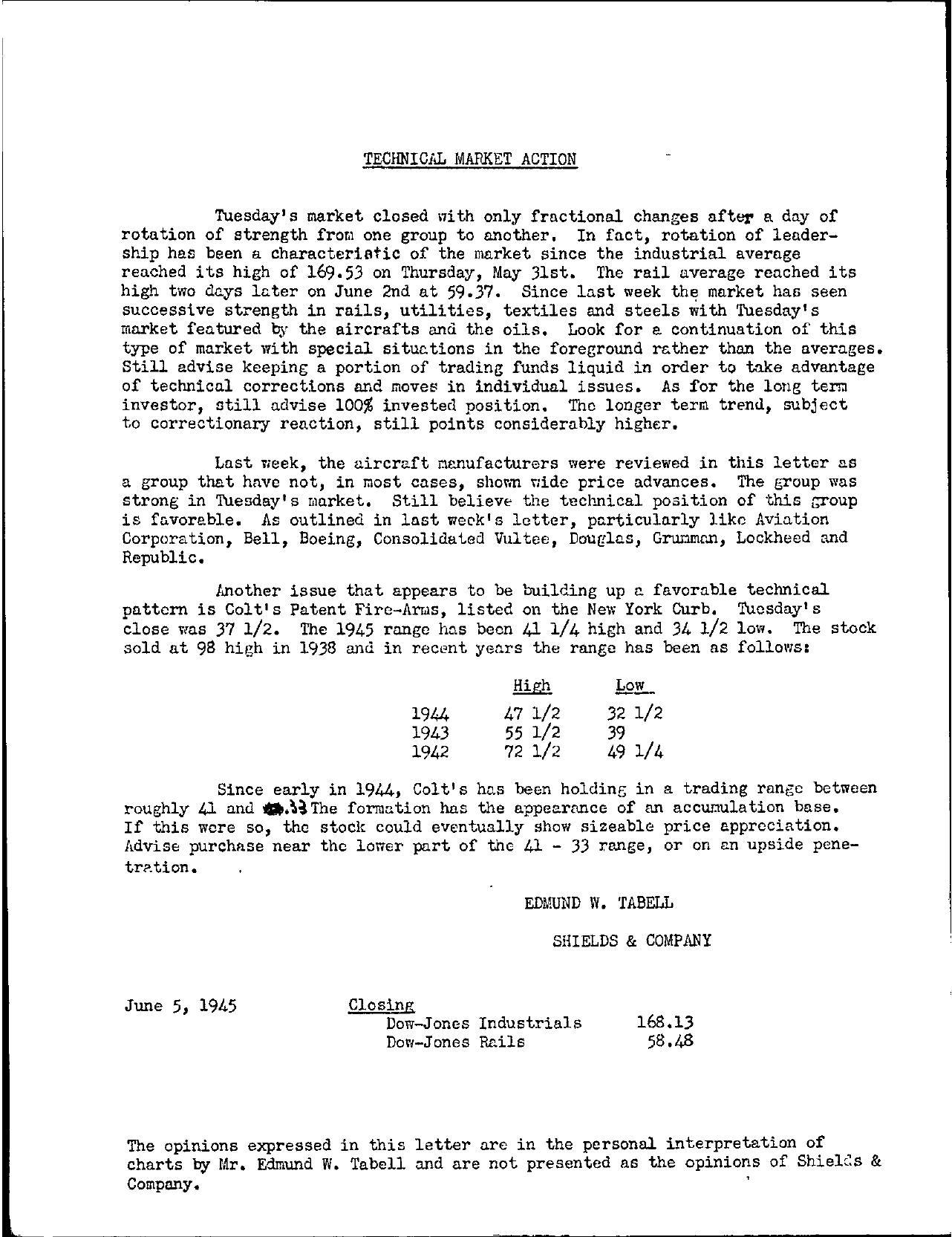 TECHNICAL MARKET ACTION Tuesday's market closed 17ith only fractional changes after a day of rotation of strength from one group to another. In fact, rotation of leadership has been a characteristic of the market since the industrial average reached its high of 169.53 on Thursday, May 31st. The rail average reached its high two days later on June 2nd at 59.37. Since last week the market has seen successive strength in rails, utilities, textiles and steels with Tuesday's market featured by the aircrafts and the oils. Look for a continuation of this type of market with special situations in the foreground rather than the averages. Still advise keeping a portion of trading funds liquid in order to take advantage of technical corrections and moves in individual issues. As for the long term investor, still advise 100 invested position. The longer term trend, subject to correctionary reaction, still points considerably higher. Last week, the aircraft manufacturers were reviewed in this letter as a group that have not, in most cases, sown wide price advances. The group was strong in Tuesday's market. Still believe the technical position of this group is favorable. As outlined in last week's letter, particularly like Aviation Corporation, Bell, Boeing, Consolidated Vultee, Douglas, Lockheed and Republic. issue that appears to be building up a favorable technical pattern is Colt's Patent Fire-Ands, listed on the New York Curb. Tuesday's close was 37 1/2. The 1945 range has been 41 1/4 high and 34 1/2 low. The stock sold at 98 high in 1938 and in recent years the range has been as follows 1944 1943 1942 High 47 1/2 55 1/2 72 1/2 Low 32 1/2 39 49 1/4 Since early in 1944, Colt's has been holding, in a trading range between roughly 41 and … formation has the appearance of an accumulation base. If this were 50, the stock could eventually show sizeable price appreciation. Advise purchase near the lower part of the 41 – 33 or on an upside penetration. EDMUND W. TABELL SHIELDS & COMPANY June 5, 1945 Closing Dow-Jones Industrials Dow-Jones Rails 168.13 58.48 The opinions expressed in this letter are in the personal interpretation of charts by Mr. Edmund W. Tabell and are not presented as the opinions of Shields & Company.