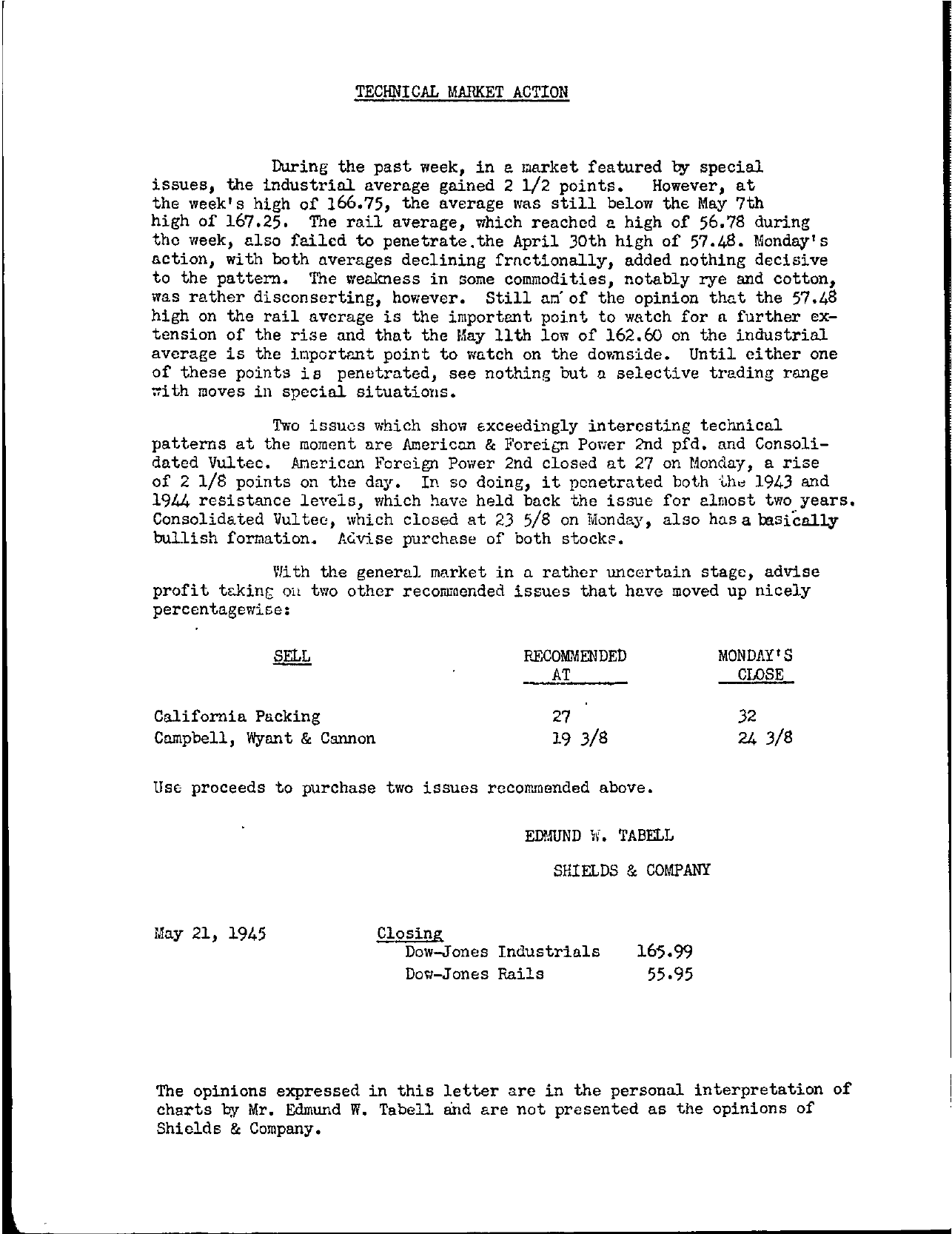 TECHNICAL MARKET ACTION During the past week, in a market featured by special issues, the industrial average gained 2 1/2 points. However, at the week's high of 166.75, the average was still below the May 7th high of 167.25. The rail average, which reached a high of 56.78 during the week, also failed to penetrate the April 30th high of 57.48. Monday's action, with both averages declining functionally, added nothing decisive to the pattern. The weakness in some commodities, notably rye and cotton, was rather disconserting, however. Still a lot the opinion that the 57.48 high on the rail average is the important point to watch for a further extension of the rise and that the May 11th low of 162.60 on the industrial average is the important point to watch on the downside. Until either one of these points is penetrated, see nothing but a selective trading range with moves in special situations. Two issues which show Exceedingly interesting technical patterns at the moment are American & Foreign Power 2nd pfd. and Consolidated Vultee. American Foreign Power 2nd closed at 27 on 1,10nday, a rise of 2 1/8 points on the day. In so doing, it penetrated both the 1943 and 1944 resistance levels, which have held back the issue for almost two years. Consolidated Vultee, which closed at 23 5/8 on Monday, also has a basically bullish formation. Advise purchase of both stock of with the general market in 0. rather uncertain stage, advise profit taking on two two other recommended issues that have moved up nicely percentagewise California Packing Campbell, Wyant & Cannon F.ECOMMENDED AT 27 19 3/8 MONDAY'S CLOSE 32 24 3/8 Use proceeds to purchase two issues recommended above. ,I.EDMUND TABELL SHIELDS & COMPANY May 21, 1945 Closing Dow-Jones Industrials Dow-Jones Hails 16'5.99 55.95 The opinions expressed in this letter are in the personal interpretation of charts by Mr. Edmund W. Tabell and are not presented as the opinions of Shields & Company.