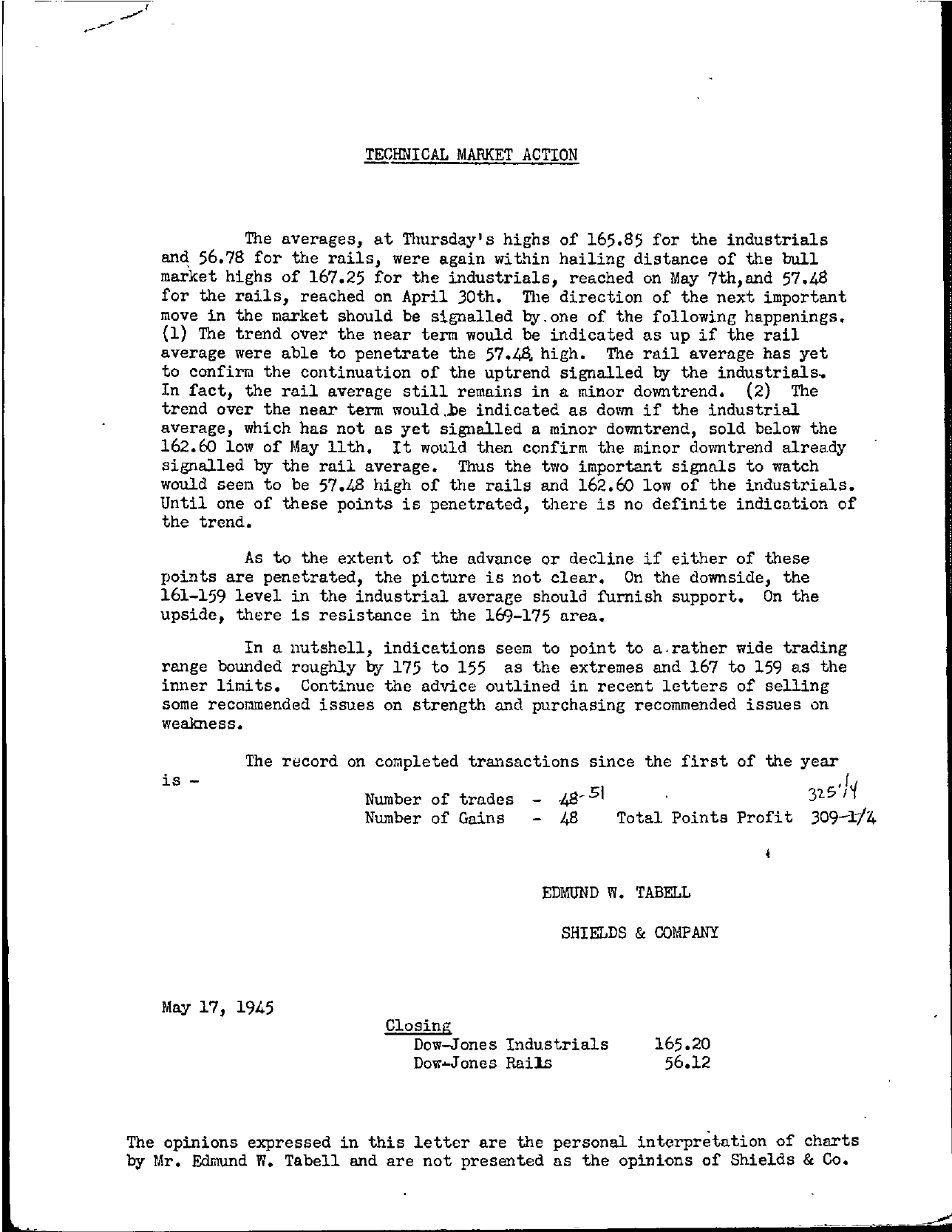 TECHNICAL MARKET ACTION The averages, at Thursday's highs of 165.85 for the industrials and 56.78 for the rails, were again within hailing distance of the bull market highs of 167.25 for the industrials, reached on May 7th,and 57.48 for the rails, reached on April 30th. The direction of the next important move in the market should be signalled bw.one of the following happenings. (1) The trend over the near term would be indicated as up if the rail average were able to penetrate 57.48. high. The rail average has yet to confirm the continuation of the uptrend signalled by the industrials. In fact, the rail average still remains in a minor downtrend. (2) The trend over the near term would.be indicated as down if the industrial average, which has not as yet signalled a minor downtrend, sold below the l62.El low of May 11th. It would then confirm the minor downtrend already Signalled by the rail average. Thus the two important signals to watch would seem to be 57.48 high of the rails and l62.El low of the industrials. Until one of these points is penetrated, there is no definite indication of the trend. As to the extent of the advance or decline if either of these points are penetrated, the picture is not clear. On the downside, the 161-159 level in the industrial average should furnish support. On the upside, there is resistance in the 169-175 area. In a nutshell, indications seem to point to a rather wide trading range bounded roughly by 175 to 155 as the extremes and 167 to 159 as the inner limits. Continue the advice outlined in recent letters of selling some recommended issues on strength and purchasing recommended issues on weakness. The record on completed transactions since the first of the year is Number of trades – 48- 51 Number of Gains – 48 Total Points Profit 309-1/4 EDMUND W. TABELL SHIELDS & COMPANY May 17, 1945 Closing Dow-Jones Industrials ones Rails 165.20 56.12 The opinions expressed in this letter are the personal interpretation of charts by Mr. Edmund W. Tabell and are not presented as the opinions of Shields & Co.