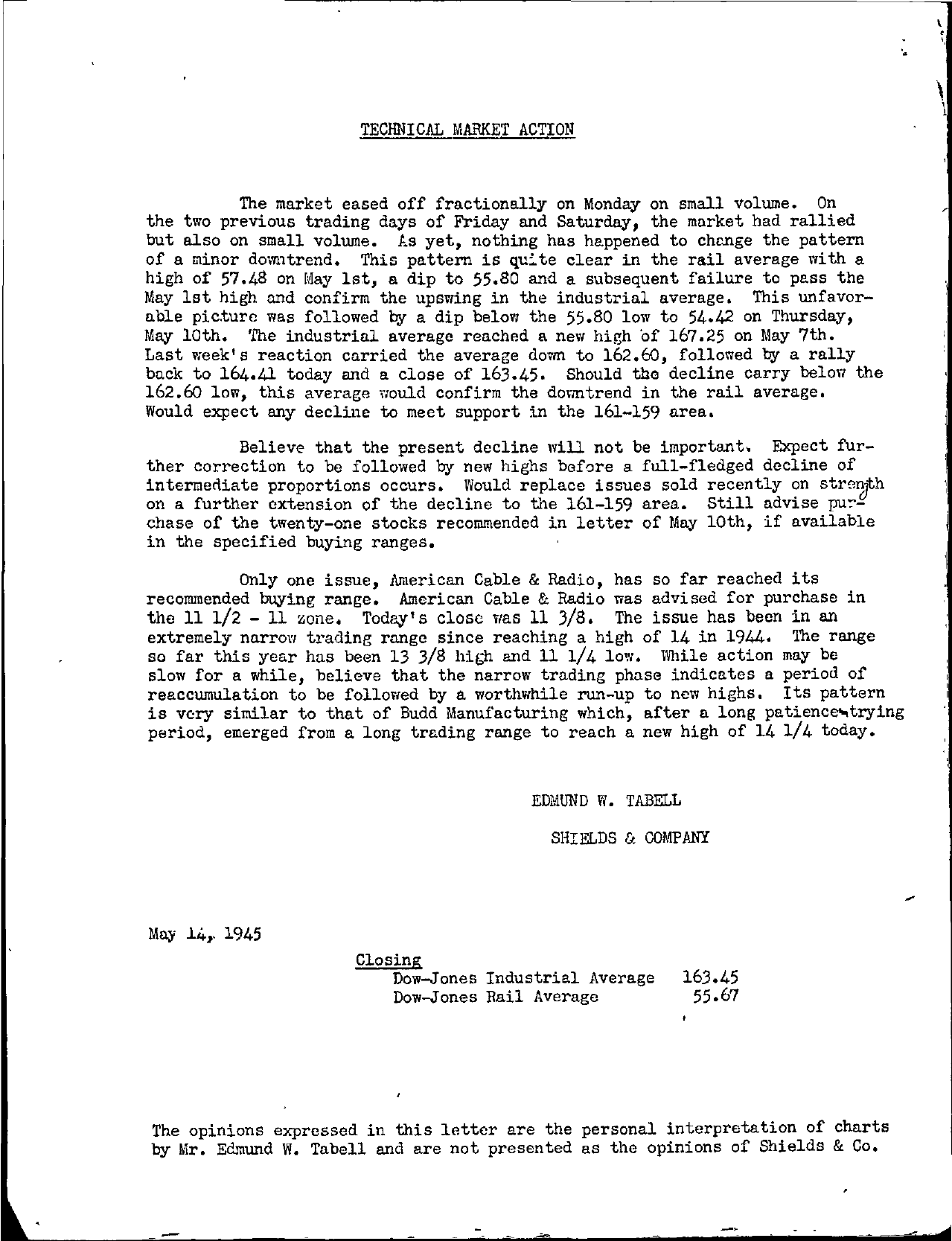 TECHNICAL MARKET ACTION The market eased off fractionally on Monday on small volume. On the two previous trading days of Friday and Saturday, the market had rallied but also on small volume. As yet, nothing has happened to change the pattern of a minor dOln1trend. This pattern is clear in the rail average with a high of 57.48 on May 1st, a dip to 55.80 and a subsequent failure to pass the May 1st high and confirm the upswing in the industrial average. This unfavorable picture was followed by a dip below the 55.80 low to 54.42 on Thursday, May 10th. The industrial average reached a new high 'of 167.25 on May 7th. Last week's reaction carried the average down to 162.60, followed by a rally back to 164.41 today and a close of 163.45. Should the decline carry belol7 the 162.60 low, this average would confirm the dOl1Iltrend in the rail average. Would expect any decline to meet support in the 161-159 area. Believe that the present decline will not be important. Expect further correction to be followed by new highs before a full-fledged decline of intermediate proportions occurs. Would replace issues sold recently on strength on a further extension of the decline to the 161-159 area. Still advise chase of the twenty-one stocks recommended in letter of May 10th, if available in the specified buying ranges. Only one issue, American Cable & Radio, has so far reached its recommended buying range. American Cable & Radio was advised for purchase in the 11 1/2 – 11 Today's close was 11 3/8. The issue has been in an extremely narrow trading range since reaching a high of 14 in 1944. The range so far this year has been 13 3/8 high and 11 1/4 10\,/. While action may be slow for a while, believe that the narrow trading phase indicates a period of reaccumulation to be followed by a worthwhile run-up to new highs. Its pattern is very similar to that of Budd Manufacturing which, after a long patience-.trying period, emerged from a long trading range to reach a new high of 14 1/4 today. EDMUND W. TABELL SHIELDS &. COMPANY May 14, 1945 Closing Dow-Jones Industrial Average 163.45 Dow-Jones Rail Average 55.67 The opinions expressed in this letter are the personal interpretation of charts by Mr. Edmund W. Tabell and are not presented as the opinions of Shields & Co.