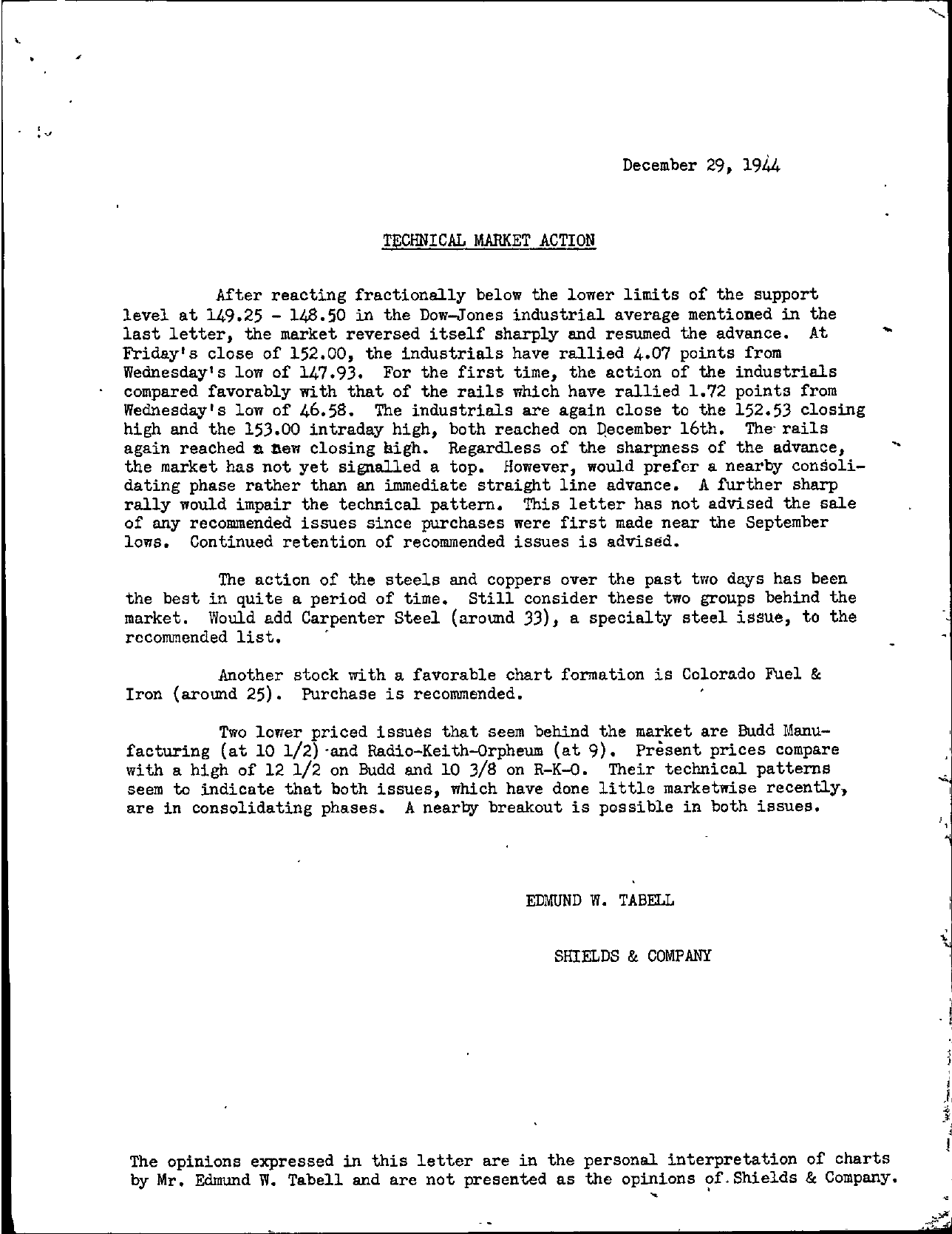 December 29, 1944 TECHNICAL MARKET ACTION After reacting fractionally below the lower limits of the support level at 149.25 – 148.50 in the Dow-Jones industrial average mentioned in the last letter, the market reversed itself sharply and resumed the advance. At Friday's close of 152.00, the industrials have rallied 4.07 points from Wednesday's low of 147.93. For the first time, the action of the industrials compared favorably with that of the rails which have rallied 1.72 points from Wednesday's low of 46.58. The industrials are again close to the 152.53 closing high and the 153.00 intraday high, both reached on 16th. The' rails again reached n new closing high. Regardless of the sharpness of the advance, the market has not yet signalled a top. However, would prefer a nearby consolidating phase rather than an immediate straight line advance. A further sharp rally would impair the technical pattern. This letter has not advised the sale of any recommended issues since purchases were first made near the September lows. Continued retention of recommended issues is advised. The action of the steels and coppers over the past two days has been the best in quite a period of time. Still consider these two groups behind the market. Would add Carpenter Steel (around 33), a specialty steel issue, to the recommended list. Another stock with a favorable chart formation is Colorado Fuel & Iron (around 25). Purchase is recommended. Two lower priced issues that seem behind the market are Budd Manufacturing (at 10 1/2) 'and Radio-Keith-Orpheum (at 9). Present prices compare with a high of 12 1/2 on Budd and 10 3/8 on R-K-O. Their technical patterns seem to indicate that both issues, which have done little marketwise recently, are in consolidating phases. A nearby breakout is possible in both issues. EDMUND W. TABELL SHIELDS & COMPANY The opinions expressed in this letter are in the personal interpretation of charts by Mr. Edmund W. Tabell and are not presented as the opinions of Shields & Company