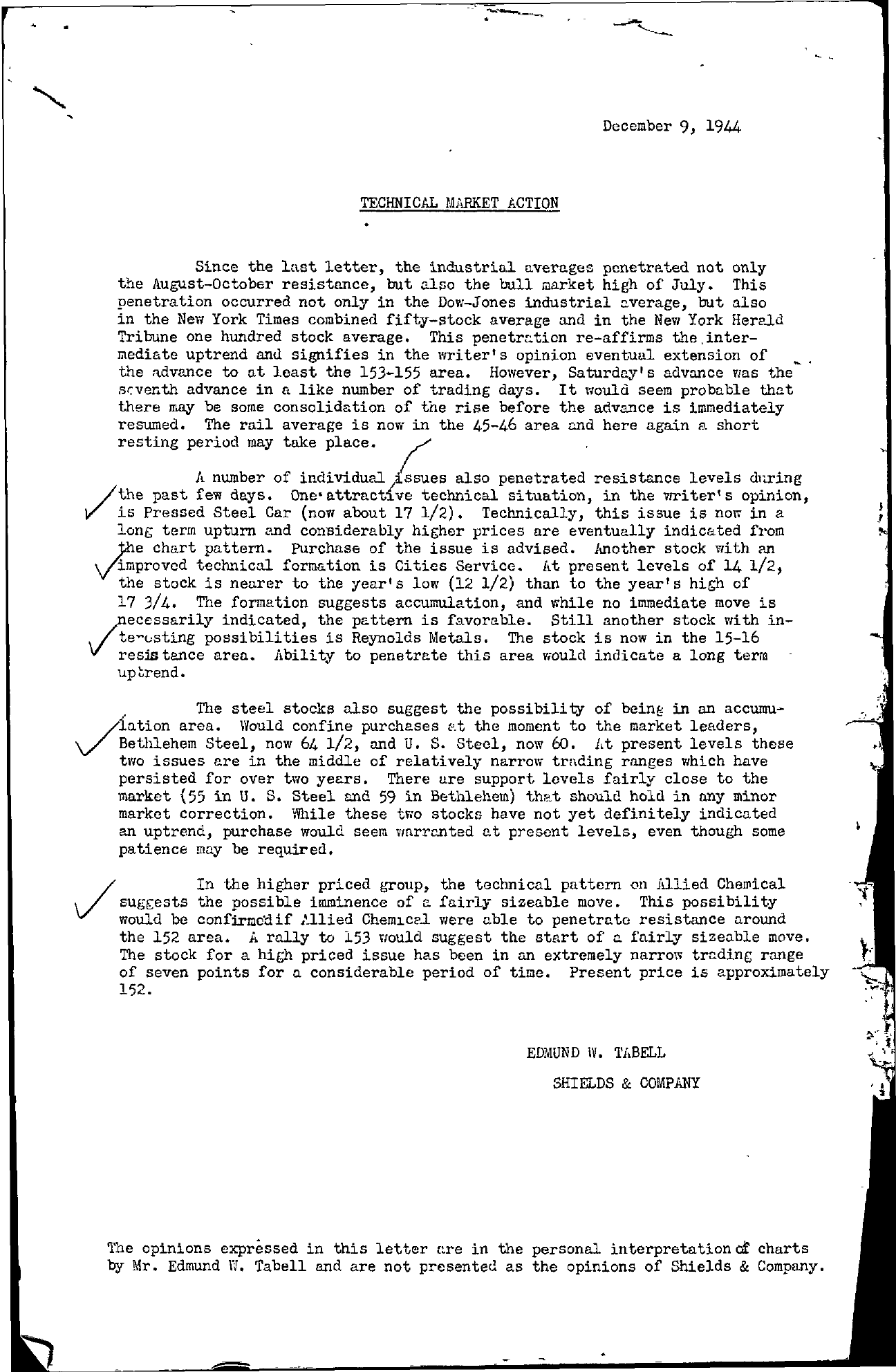 December 9, 1944 TECHNICAL MARKET ACTION Since the last letter, the industrial averages penetrated not only the August-October resistance, but also the bull market high of July. This penetration occurred not only in the Dow-Jones industrial average, but also in the New York Times combined fifty-stock average and in the New York Tribune one hundred stock average. This penetration re-affirms the intermediate uptrend and signifies in the writer's opinion eventual extension of the advance to at least the 153-155 area. However, Saturday's advance was the seventh advance in a like number of trading days. It would seem probable that there may be some consolidation of the rise before the advance is immediately resumed. The rail average is now in the 45-46 area and here again 8. short resting period may take place. (A number of individual issues also penetrated resistance levels during past few days. One attractive technical situation, in the opinion, is Pressed Steel Car (now about 17 1/2). Technically, this issue is now in a long term upturn and considerably higher prices are eventually indicated from he chart pattern. Purchase of the issue is advised. Another stock with a technical formation is Cities Service. At present levels of 14 1/2, the stock is nearer to the year's low (121/2) than to the year's high of 17 3/4. The formation suggests accumulation, and while no immediate move is vindicated, the is favorable. Still another stock with in possibilities is Reynolds Metals. The stock is now in the 15-16 resistance area. Ability to penetrate this area would indicate a long term uptrend. The steel stocks also suggest the possibility of being in an accumulation area. Would confine purchases e.t the moment to the market leaders, Bethlehem Steel, now 64 1/2, and U. S. Steel, now 60. it present levels these two issues are in the middle of relatively narrow trading ranges which have persisted for over two years. There are support levels fairly close to the market (55 in U. S. Steel and 59 in Bethlehem) thp.t should hold in any minor market correction. While these two stocks have not yet definitely indicated an uptrend, purchase would seem warranted at present levels, even though some patience may be required. / In the higher priced group, the technical pattern on Allied Chemical suggests the possible imminence of a fairly sizeable move. This possibility would be confirmed if Allied Chemical were able to penetrate resistance around the 152 area. j, rally to 153 would suggest the start of a fairly sizeable move. The stock for a high priced issue has been in an extremely narrow trading range of seven points for a considerable period of time. Present price is approximately 152. EDMUND W. TABELL SHIELDS & COMPANY The opinions expressed in this letter in the personal interpretation charts by Mr. Edmund W. Tabell and are not presented as the opinions of Shields & Company.