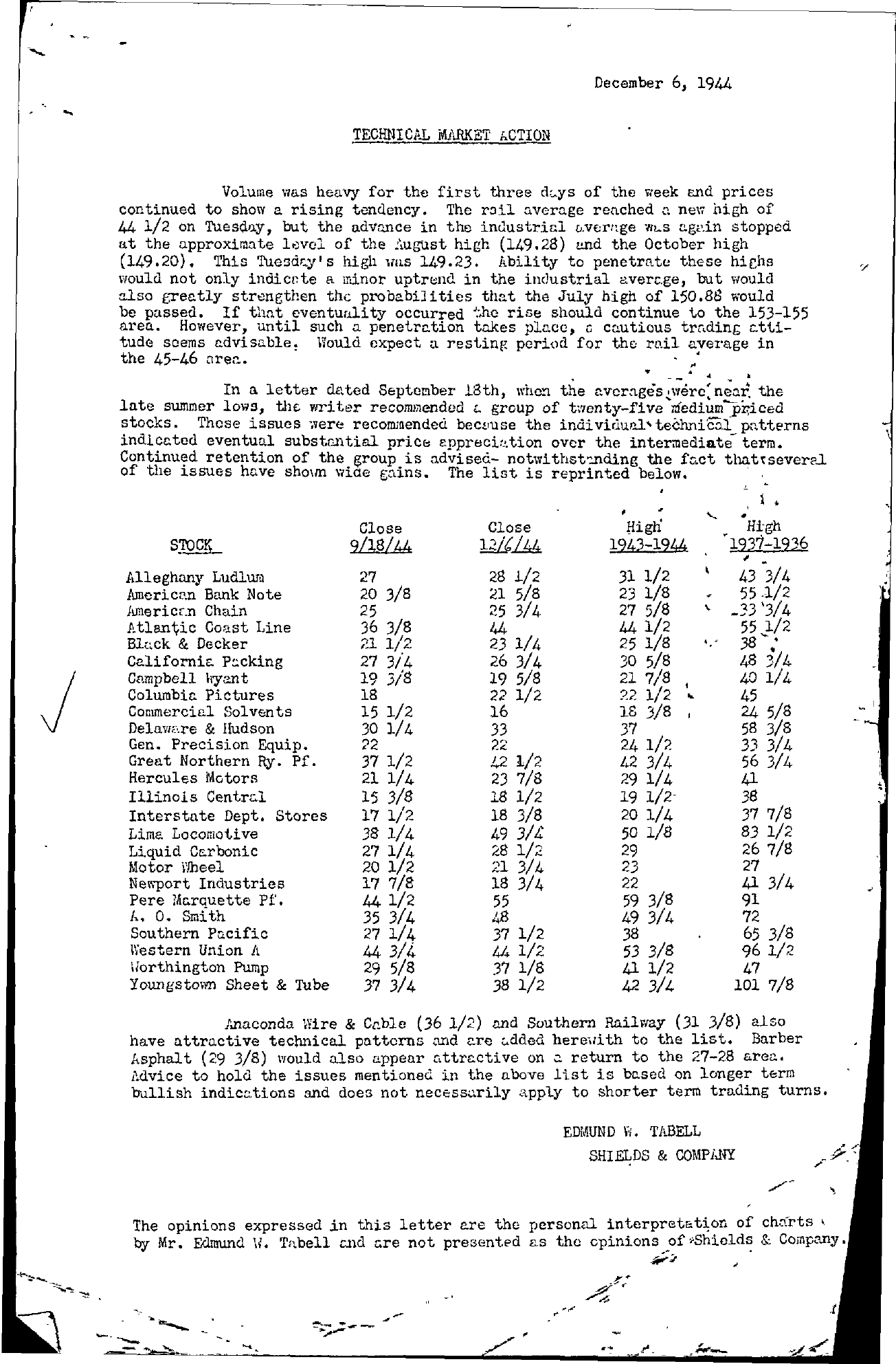 December 6, 1944 TECHNICAL MARKET ACTION Volume was heavy for the first three of the week and prices continued to show a rising tendency. The average reached a new high of 44 1/2 on Tuesday, but the advance in the industrial average was stopped at the approximate level of the August high (149.2S) und the October high (149.20). This Tuesday's high was 149.23. Ability to penetrate these hiCh8 would not only indicate a minor uptrend in the industrial average, but would also greatly strengthen the probabilities that the July high of 150.B would be passed. If that eventuality occurred The rise should continue to the 153-155 area. However, until such a penetration takes place, a cautious trading attitude seems advisable. Would expect a resting period for the rail average in the 45-46 area. In a letter dated September 18th, whc.l the averages were near the late summer lows, the; writer recommended a group of twenty-five medium priced stocks. Those issues were recommended because the individual technical patterns indicated eventual substantial price appreciation over the intermediate term. Continued retention of the group is advised notwithstanding the fact that sever of the issues have shown wide gains. The list is reprinted below. Stock Alleghany Ludlum, American Bank Note, American Chain, Atlantic Coast Line, Black & Decker, California Packing, Campbell Wyant, Columbia Pictures, Commercial Solvents, Delaware & Hudson, Gen. Precision Equip, Great Northern Ry. Pf, Hercules Motors, Illinois Central, Interstate Dept. Stores, Lima Locomotive, Liquid Carbonic, Motor Wheel, Newport Industries, Pere Marquette Pf, A. O. Smith, Southern Pacific, Western Union A, Worthington Pump, Youngstown Sheet & Tube; Anaconda Wire & Cable (36 1/2) and Southern Railway (31 3/B) also have attractive technical patterns and are added herewith to the list. Barber Asphalt (29 3/8) would also appear attractive on ;, return to the 27-28 area. Advice to hold the issues mentioned in the above list are based on longer term bullish indications and does not necessarily apply to shorter term trading turns. EDMUND W> TABELL SHIELDS & COMPANY The opinions expressed in this letter are the personal interpretation of charts by Mr. Edmund W. Tabell and are not presented as the opinions of Shields & Company