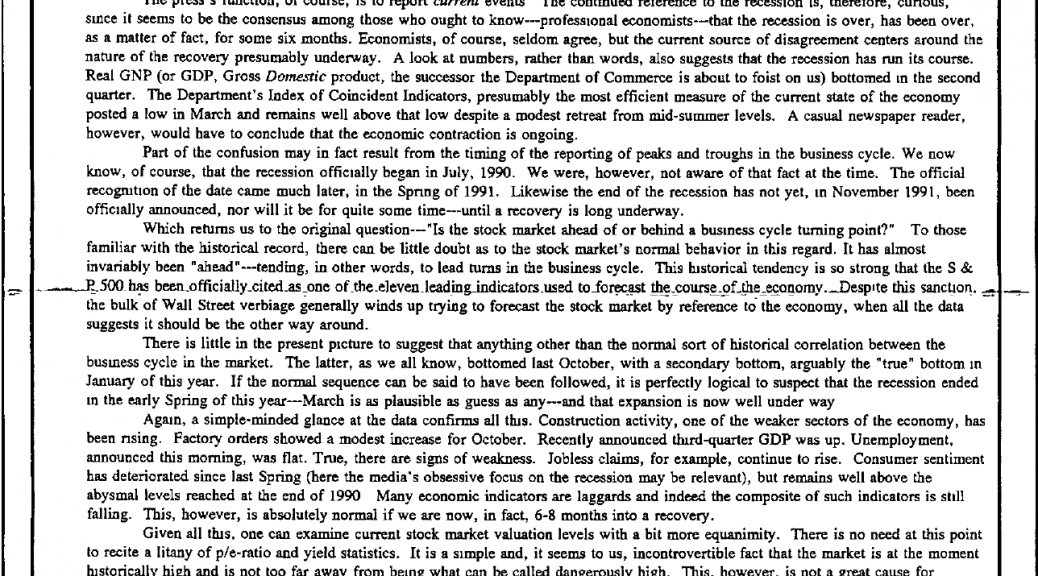 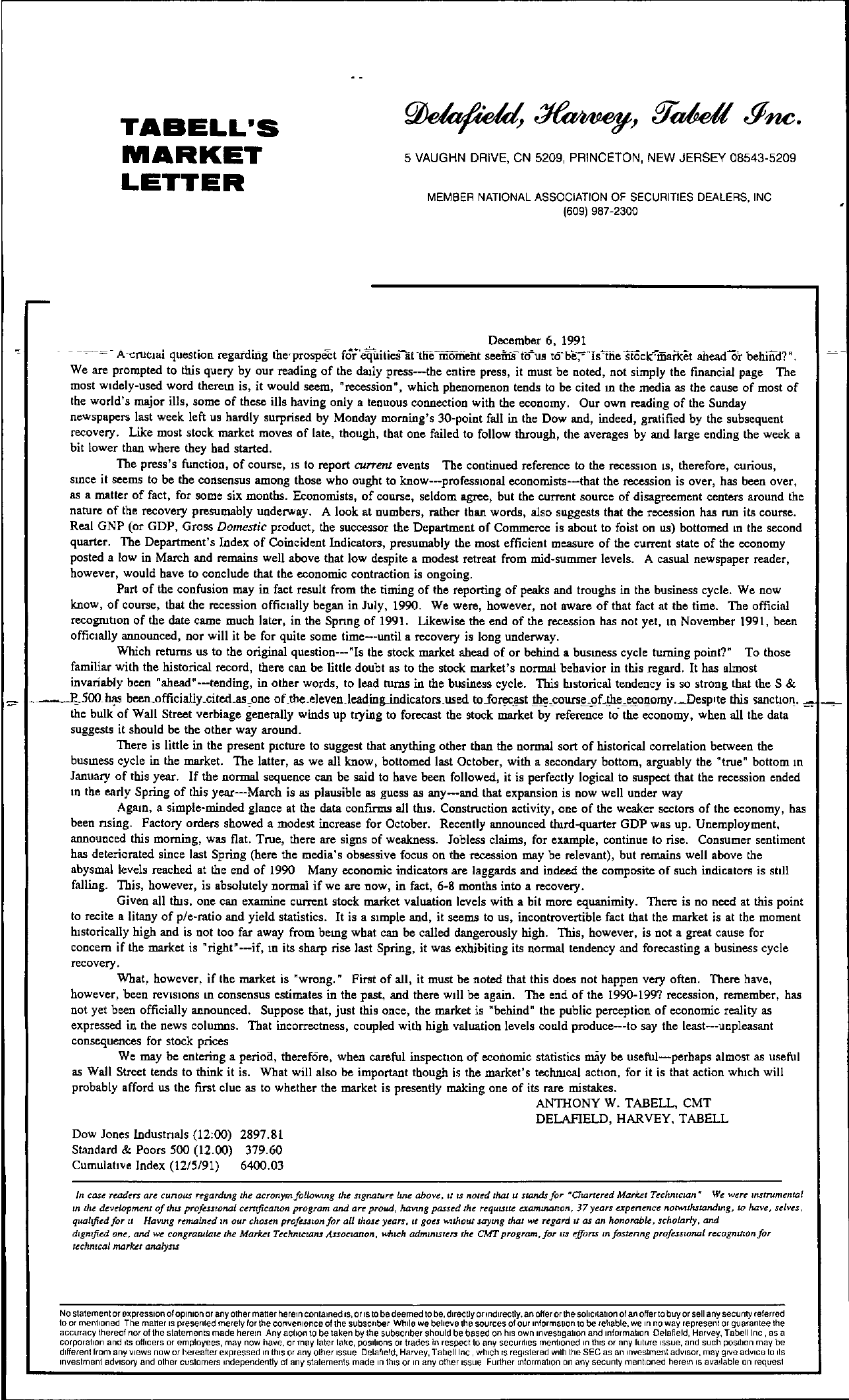 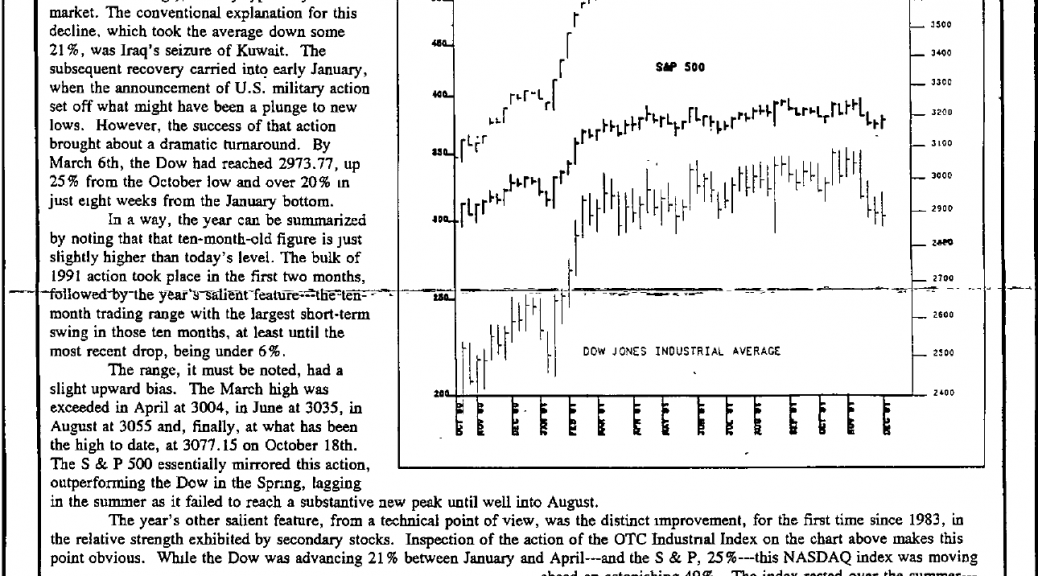 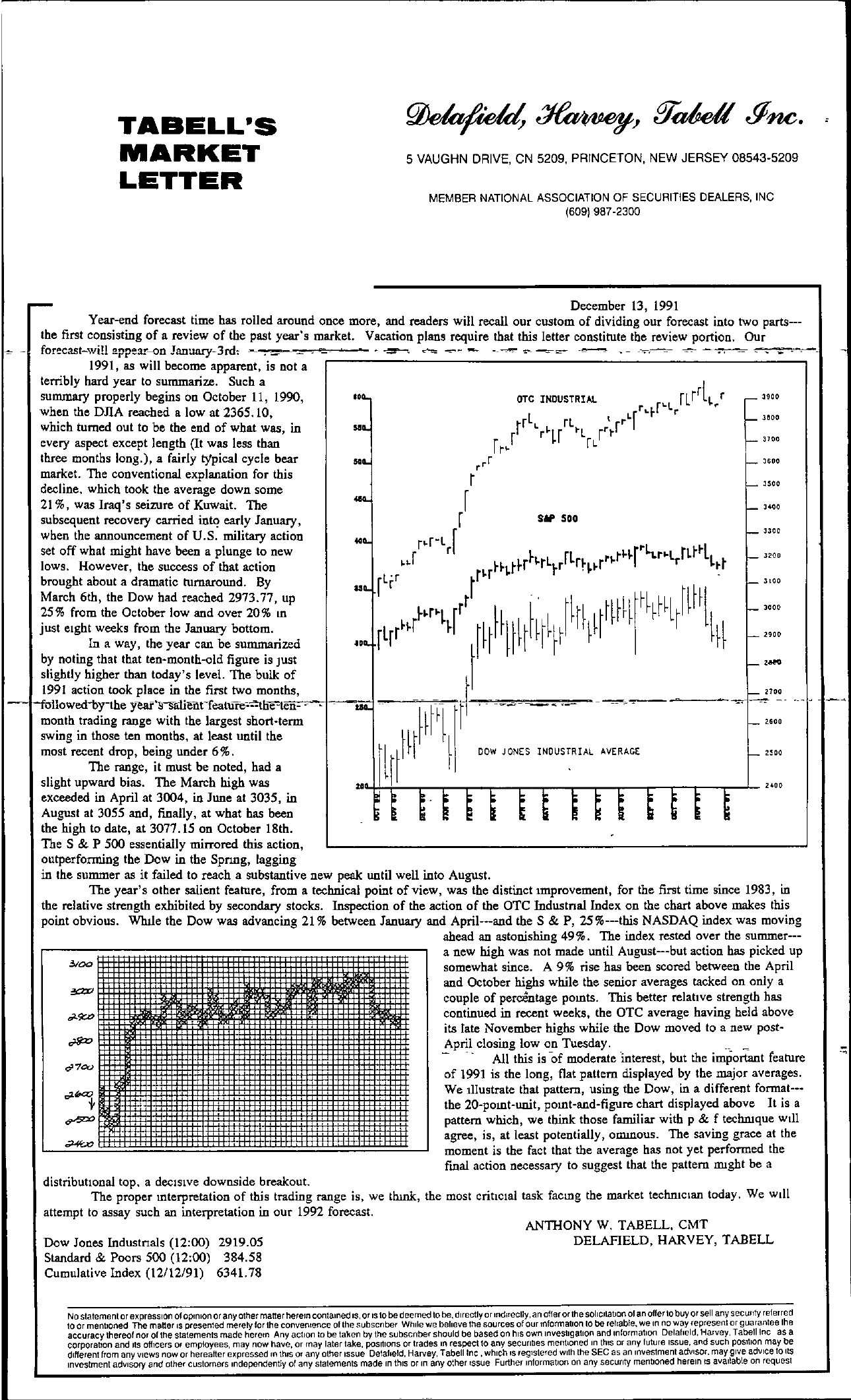 TABELL'S MARKET LETTER 5 VAUGHN DRIVE, CN 5209, PRINCETON, NEW JERSEY 08543-5209 MEMBER NATIONAL ASSOCIATION OF SECURITIES DEALERS, INC (609) 987-2300 December 13, 1991 Yeru-ed forecast .time has rolled around once more, and readers will recall our custom of dividing our forecast into two parts— the first conslstmg of a review of the past year's market. Vacation plans require that this letter constitute the review portion. Our forecast-,vi!l2.ppear-on January-3rc!; — . – — !'– – – – – –,.-.— – – …. – 1991, as will become apparent, is not a terribly hard year to summarize. Such a summary properly begins on October 11, 1990, . OTC INDUSTRIAL J900 when the DnA reached a low at 2365.10, which turned out to be the end of what was, in every aspect except length (It was less than J800 3101) three months long.), a fairly typical cycle bear market. The conventional explanation for this decline. which took the average down some 3601) J500 21 . was Iraq's seizure of Kuwait. The subsequent recovery carried intI early January, when the announcement of U.S. military action Sal' 500 3400 3300 set off what might have been a plunge to new lows. However, the success of that action 3200 brought about a dramatic turnaround. By 311)0 March 6th, the Dow had reached 2973.77, up 25 from the October low and over 20 m 3000 just eight weeks from the January bottom. In away, the year can be summarized 2900 by noting that that ten-month-old figure is Just slightly higher than today's level. The bulk of 1991 action took place in the first two months, – –i'ollowedby-the year'B.liIl.Cfeaturetlie -t'en-'C-O–'-' –2100 month trading range with the largest short-term 2600 swing in those ten months, at least until the most recent drop, being under 6. DOW JONES INDUSTRIAL AVERAGE 2OO The range, it must be noted, had a slight upward bias. The March high was exceeded in April at 3004, in June at 3035, in ''4h—r–r-..,–,—r—,r–r–r-..,–,—r—,r–r-J- HOO August at 3055 and, finally, at what has been the bigh to date, at 3077 .15 on October 18th. The S & P 500 essentially mirrored this action, outperfonoing the Dow in the Spnng, lagging in the summer as it failed to reach a substantive new peak until well into August. The year's other salient feature, from a technical point of view, was the distinct unprovement, for the first time since 1983, in the relative strength exhibited by secondary stocks. Inspection of the action of the OTC Industnal Index on the chart above makes this point obvious. WIule the Dow was advancing 21 between January and April—and the S & P, 25–this NASDAQ index was moving ahead an astonishing 49. The index rested over the summer– a new bigh was not made until August—but action has picked up somewhat since. A 9 rise has been scored between the April and October highs while the senior averages tacked on only a couple of percentage pomts. This better relative strength has continued in recent weeks, the OTC average having held above its late November highs while the Dow moved to a new post- April closing Iowan Tuesday. – . . All this is -of moderate 'interest, but the important feature of 1991 is the long, flat pattern displayed by the maior averages. We Illustrate that pattern, using the Dow, in a different format— the 20-pomt-unit, pomt-and-figure chart displayed above It is a pattern which, we think those familiar with p & f techmque Will agree, is, at least potentially, ommaus. The saving grace at the moment is the fact that the average has not yet performed the final action necessary to suggest that the pattern OlIght be a distributtonal top. a decISive downside breakout. The proper mterpretation of this trading range is, we thmk, the most critIClai task facmg the market techniCian today. We Will attempt to assay such an interpretation in our 1992 forecast. ANTiiONY W. TABELL, CMT Dow Jones Industnals (1200) 2919.05 DELARELD,HARVEY,TABELL Standard & Poors 500 (1200) 384.58 Cumulative Index (12/12/91) 6341.78 No stalementor e)(presslon of opinion or any other matler herem contained IS, or IS to be deemed to be, directly or Indirectly, an offeror the sohcltatlon of an offer to buy or sell any secunty referred to or mentroned The matter IS presented merely for the convenience of the subscnber While we beheve the sources of our Information to be rehable, we In no way represent or guarantee the accuracy thereof nor of the statements made herem Any action to be taken by the subscnber should be based on hiS own Investigation and Information Delafield, Harvey, Tabelllnc as a corporation and ItS officers or employees, may now have, or may later take, poSitions or trades In respect to any seCUrities menhoned In thiS or any future Issue, and such pOSition may be different from any views now or hereafter e)(pressed In thIS or any other Issue Delafield, Harvey, Tabellinc , which IS registered With the SEC as an Investment advisor, may give adVice to Its Investment adVISOry and olher customers Independently of any statements made In thiS or In any oher Issue Further Information on any secunty mentioned herein IS available on request 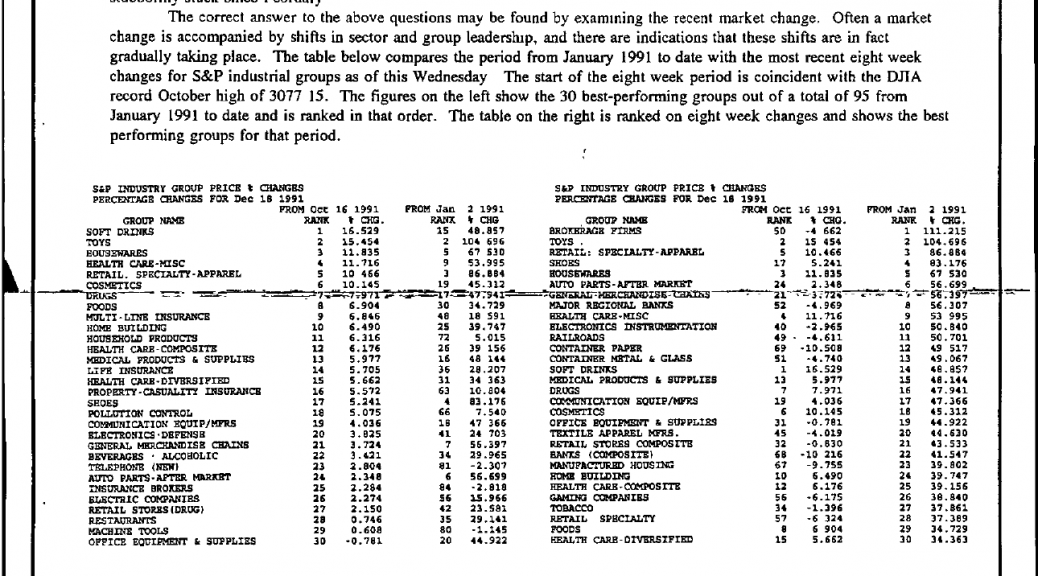 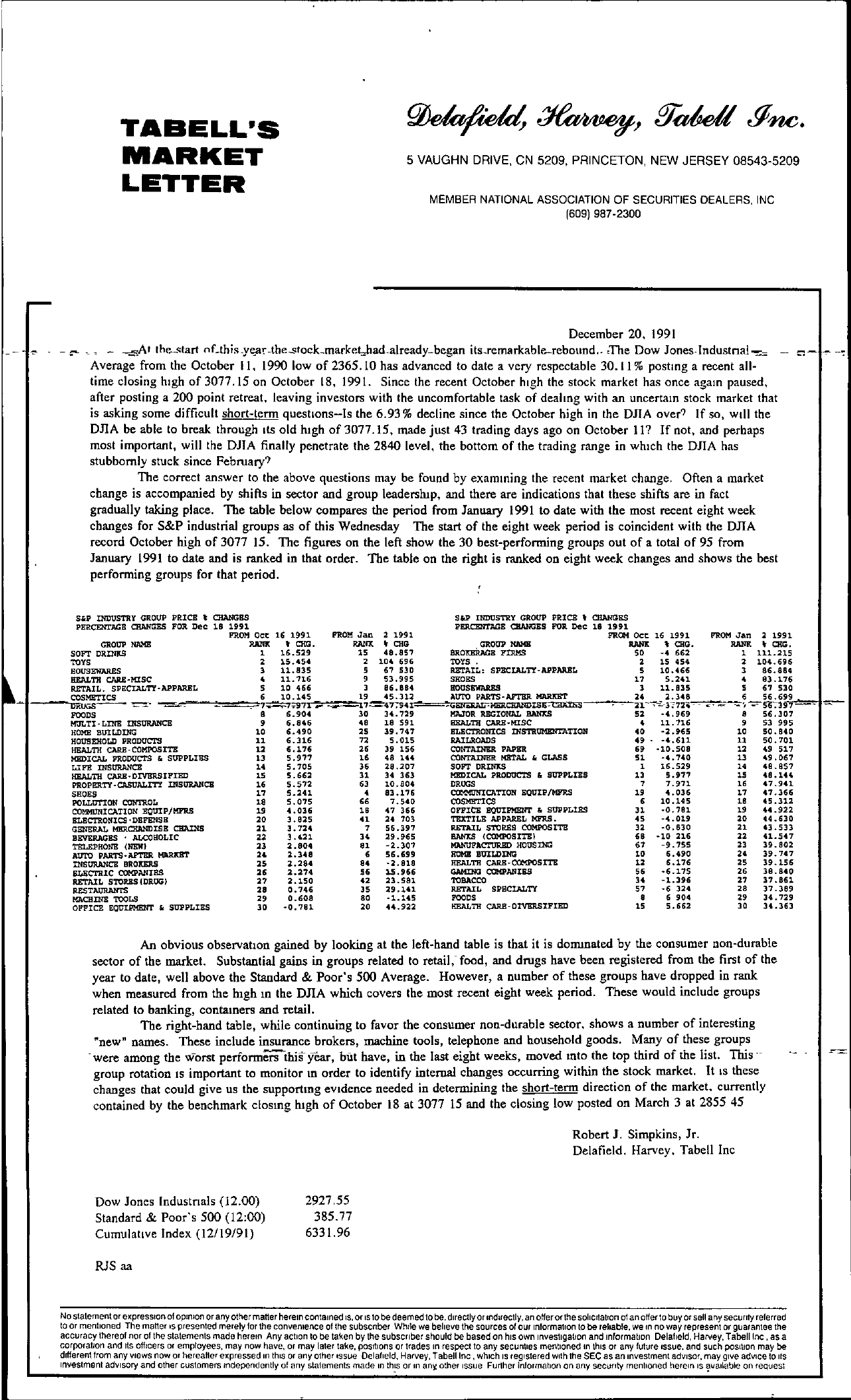