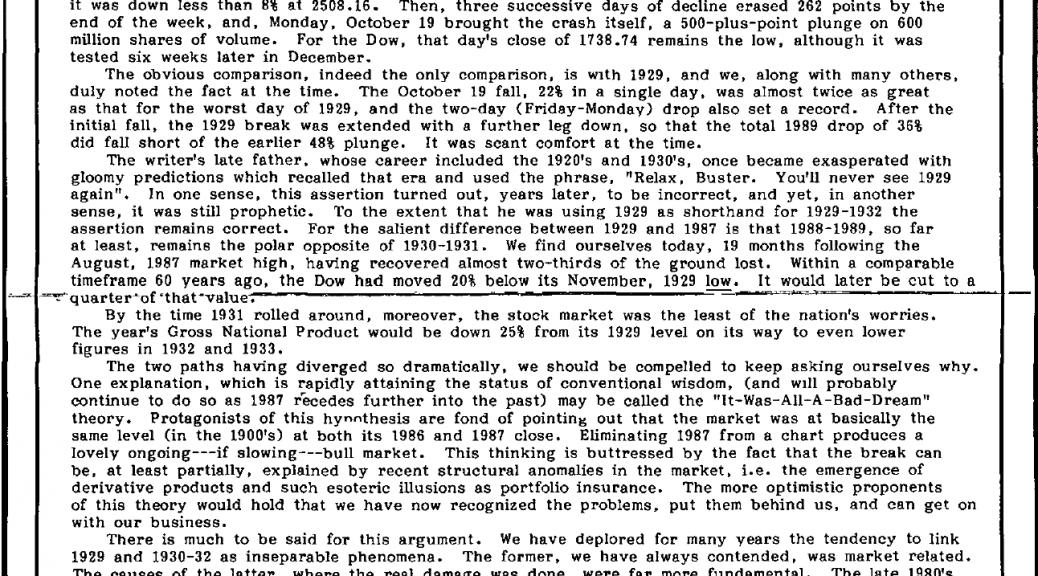 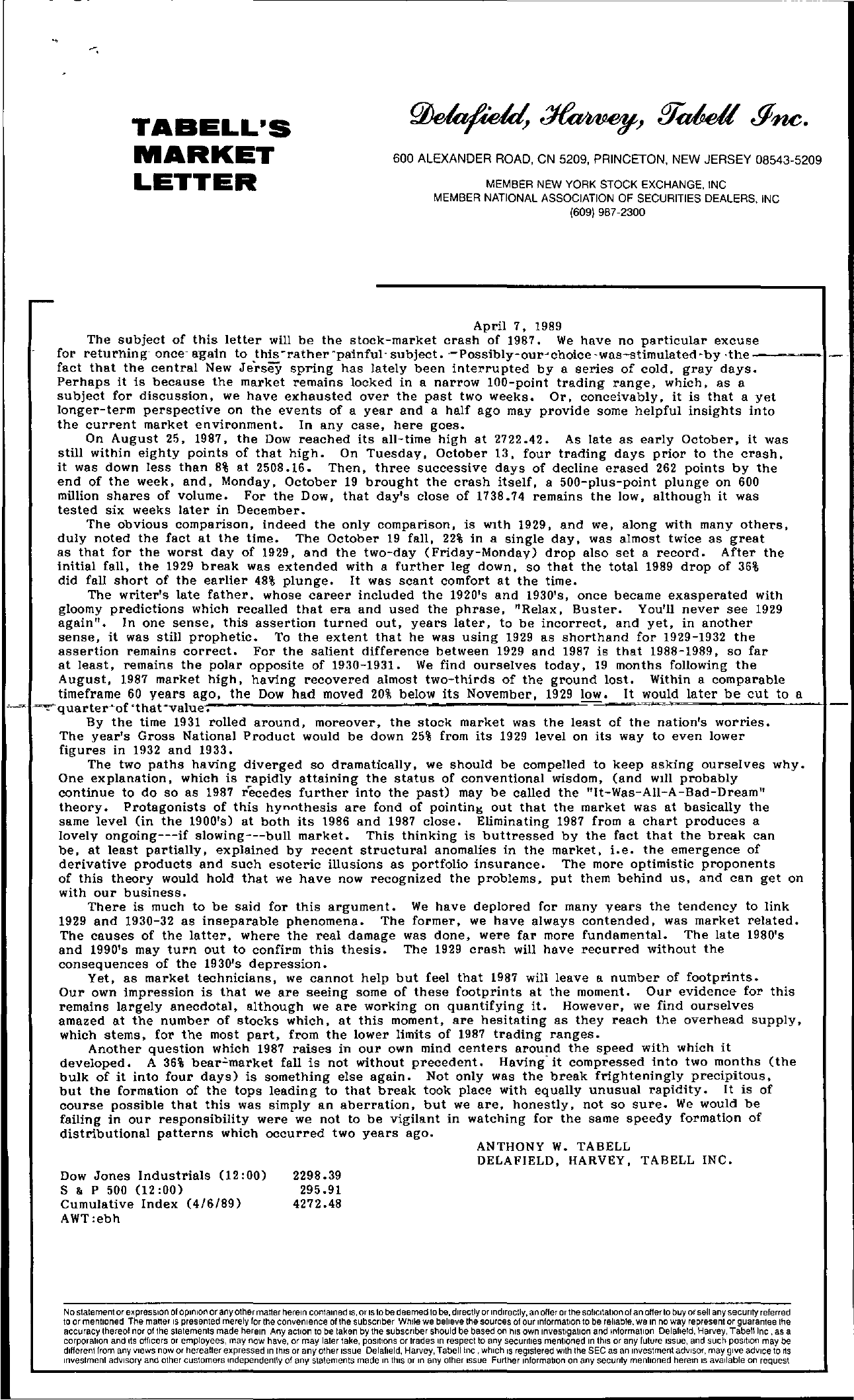 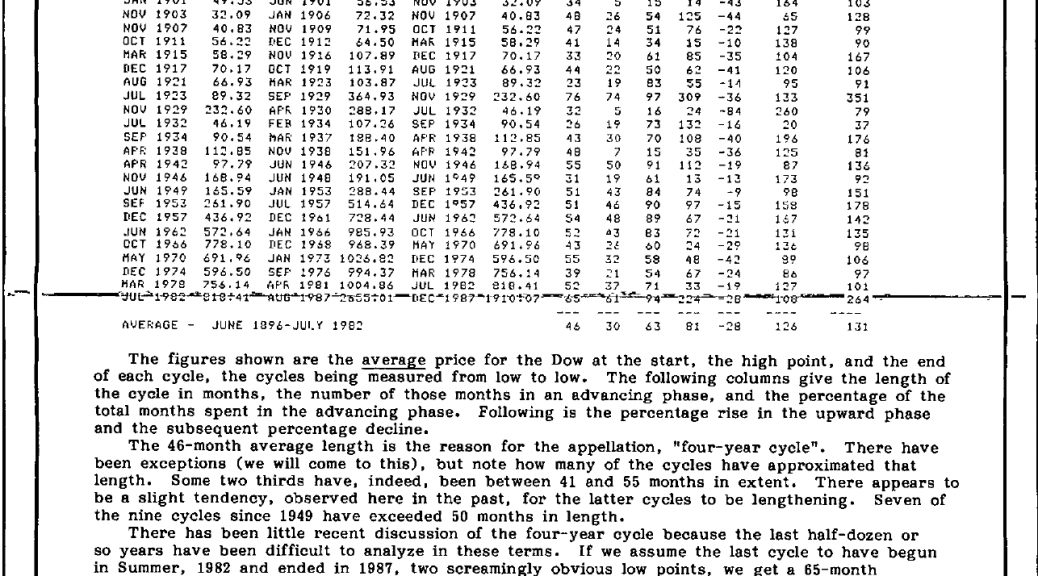 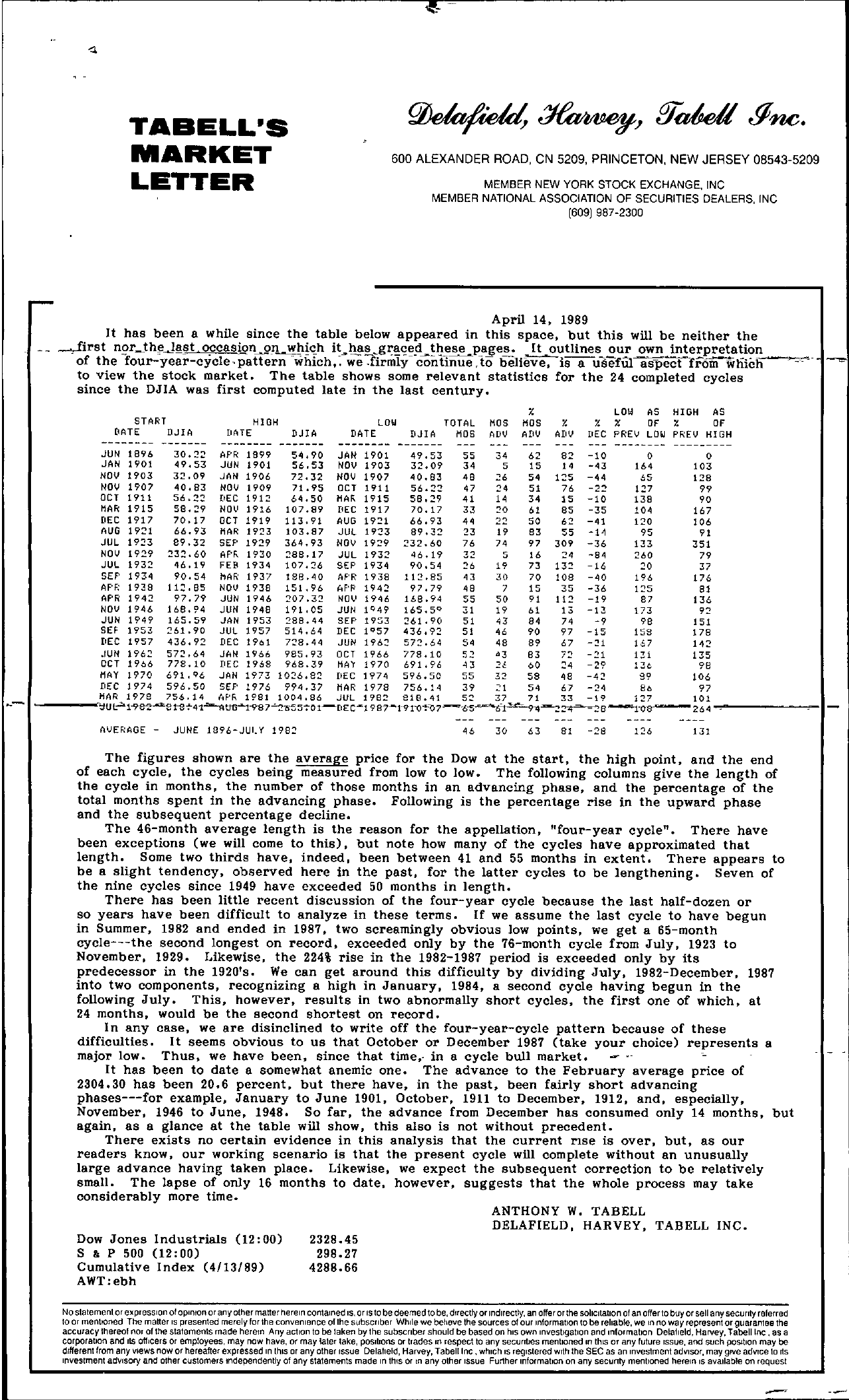 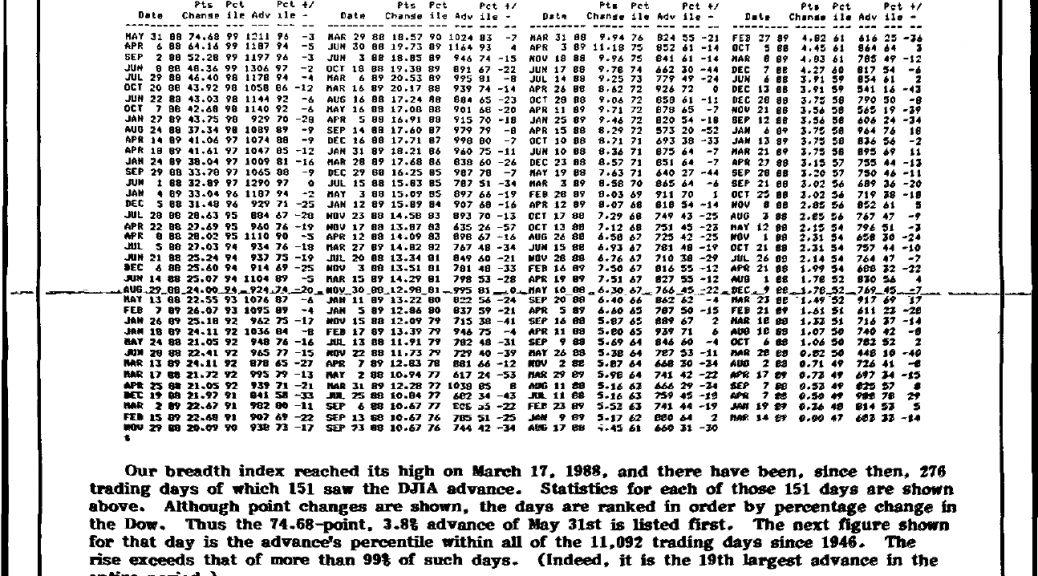 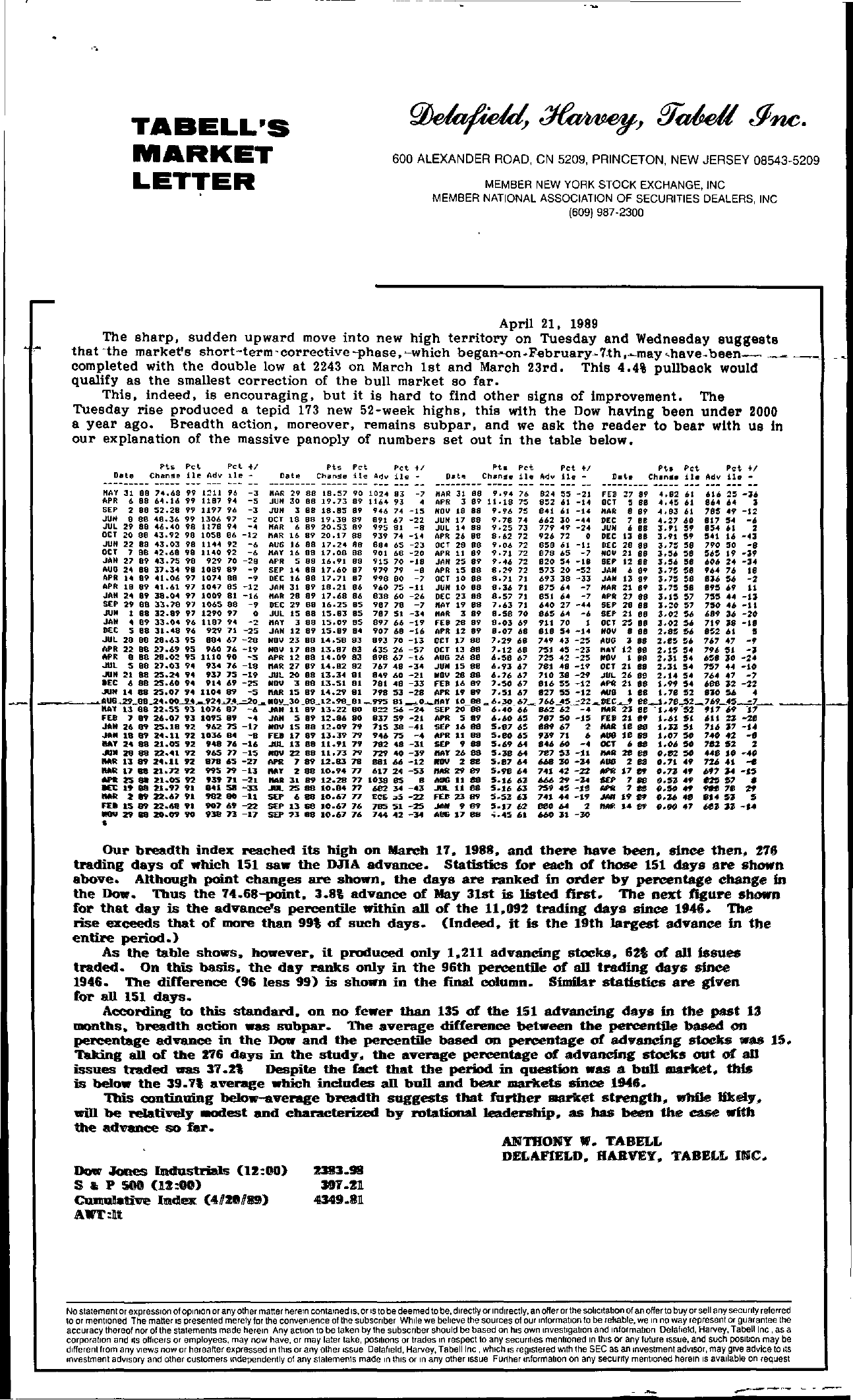 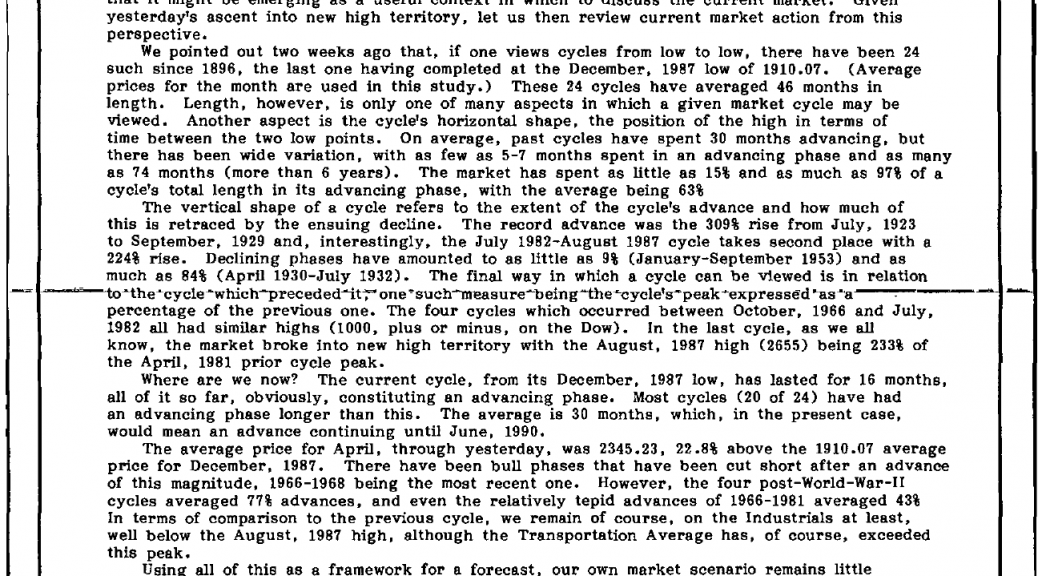 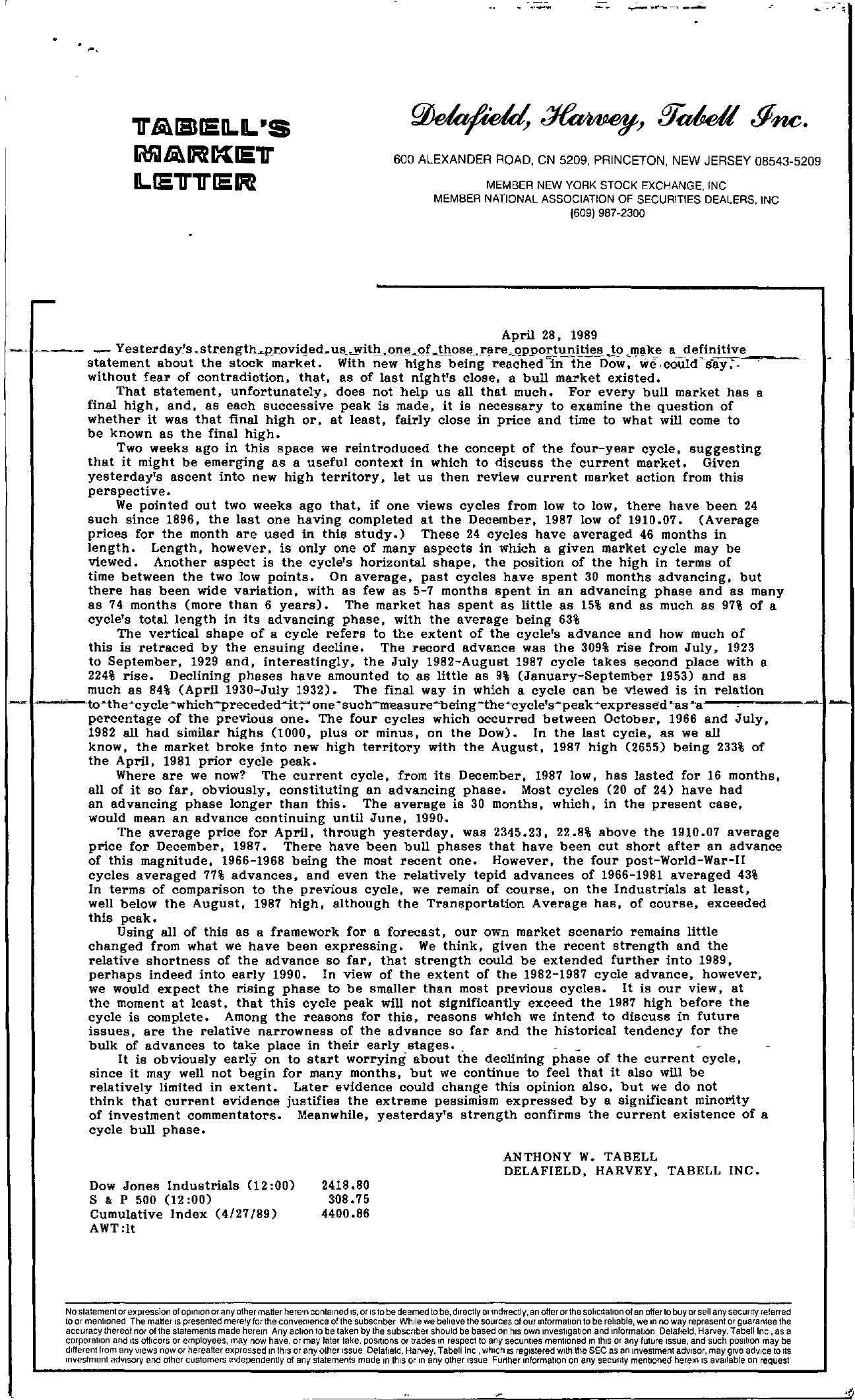 'U'Lii.\ 1mIE Il.Il. ' S IiUiILii.\iii IEV 1l.1E'U''U'1E1Rl —- 600 ALEXANDER ROAD, CN 5209, PRINCETON, NEW JERSEY 08543-5209 MEMBER NEW YORK STOCK EXCHANGE, INC MEMBER NATIONAL ASSOCIATION OF SECURITIES DEALERS, INC (609) 987-2300 April 28, 1989 – Yesterday's .strengthpovided. uS.JVitLoJ'LL-Qf.Jhos'l.. rreQPporju!'it!l .10 ,make a defin,ietl,,vce.-,..- statement about the stock market. With new highs being reached in-the Dow, we,couldSay; without fear of contradiction, that, as of last night's close, a bull market existed. That statement, unfortunately, does not help us all that much. For every bull market has a final high, and, as each successive peak is made, it is necessary to examine the question of whether it was that final high or, at least, fairly close in price and time to what will come to be known as the final high. Two weeks ago in this space we reintroduced the concept of the four-year cycle, suggesting that it might be emerging as a useful context in which to discuss the current market. Given yesterday's ascent into new high territory, let us then review current market action from this perspective. We pointed out two weeks ago that, if one views cycles from low to low, there have been 24 such since 1896, the last one having completed at the December, 1987 low of 1910.07. (Average prices for the month are used in this study.) These 24 cycles have averaged 46 months in length. Length, however, is only one of many aspects in which a given market cycle may be viewed. Another aspect is the cycle's horizontal shape, the position of the high in terms of time between the two low points. On average, past cycles have spent 30 months advancing, but there has been wide variation, with as few as 5-7 months spent in an advancing phase and as many as 74 months (more than 6 years). The market has spent as little as 15 and as much as 97 of a cycle's total length in its advancing phase, with the average being 63 The vertical shape of a cycle refers to the extent of the cycle's advance and how much of this is retraced by the ensuing decline. The record advance was the 309 rise from July, 1923 to September, 1929 and, interestingly, the July 1982-August 1987 cycle takes second place with a 224 rise. Declining phases have amounted to as little as 9 (January-September 1953) and as much as 84 (April 1930-July 1932). The final way in which a cycle can be viewed is in relation I—–to-'-the–cycle–which–precededit;' one ..suchtn-easure–being….the–cycle's-peak….expressed –as—-S — percentage of the previous one. The four cycles which occurred between October, 1966 and July, 1982 all had similar highs (1000, plus or minus, on the Dow). In the last cycle, as we all know, the market broke into new high territory with the August, 1987 high (2655) being 233 of the April, 1981 prior cycle peak. Where are we now The current cycle, from its December, 1987 low, has lasted for 16 months, all of it so far, obviously, constituting an advancing phase. Most cycles (20 of 24) have had an advancing phase longer than this. The average is 30 months, which, in the present case, would mean an advance continuing until June, 1990. The average price for April, through yesterday, was 2345.23, 22.8 above the 1910.07 average price for December, 1987. There have been bull phases that have been cut short after an advance of this magnitude, 1966-1968 being the most recent one. However, the four post-World-War-Il cycles averaged 77 advances, and even the relatively tepid advances of 1966-1981 averaged 43 In terms of comparison to the previous cycle, we remain of course, on the Industrials at least, well below the August, 1987 high, although the Transportation Average has, of course, exceeded this peak. Using all of this as a framework for a forecast, our own market scenario remains little changed from what we have been expressing. We think, given the recent strength and the relative shortness of the advance so far, that strength could be extended further into 1989, perhaps indeed into early 1990. In view of the extent of the 1982-1987 cycle advance, however, we would expect the rising phase to be smaller than most previous cycles. It is our view, at the moment at least, that this cycle peak will not significantly exceed the 1987 high before the cycle is complete. Among the reasons for this, reasons which we intend to discuss in future issues, are the relative narrowness of the advance so far and the historical tendency for the bulk of advances to take place in their early stages. . It is obviously early on to start worrying about the declining phase of the current cycle, since it may well not begin for many months. but we continue to feel that it also will be relatively limited in extent. Later evidence could change this opinion also, but we do not think that current evidence justifies the extreme pessimism expressed by a significant minority of investment commentators. Meanwhile, yesterday's strength confirms the current existence of a cycle bull phase. Dow Jones Industrials (12 00) S & P 500 (12 00) Cumulative Index (4/27/89) AWTlt 2418.80 308.75 4400.86 ANTHONY W. TABELL DELAFIELD, HARVEY, TABELL INC. No statement or expression of opinion or any other matter herein contained IS, or IS to be deemed to be, directly or indirectly, an offer orthe sohcllallon of an offer to buy or sell any securrty referred to or mentioned The matter IS presented merely for the convenience of the subscnber While we beheve the sources of our Information to be rehable, we In no way represent or guarantee the accuracy thereof nor of the statements made herein Any action to be taken by the subscriber should be based on hiS own Investigation and Informahon Delafield, Harvey, Tabelltnc, as a corporallon and Its officers or employees, may now have, or may later take, positions or trades In respect to any securities mentioned In thiS or any future Issue, and such posilion may be different from any views now or hereatter expressed In thiS or any other Issue Delafield, Harvey, Tabellinc , which IS registered With the SEC as an Investment adVisor, may give adVice to Its Investment adVISOry and other customers Independently of any statements made In thiS or In any other Issue Further information on any security mentioned herein IS available on request