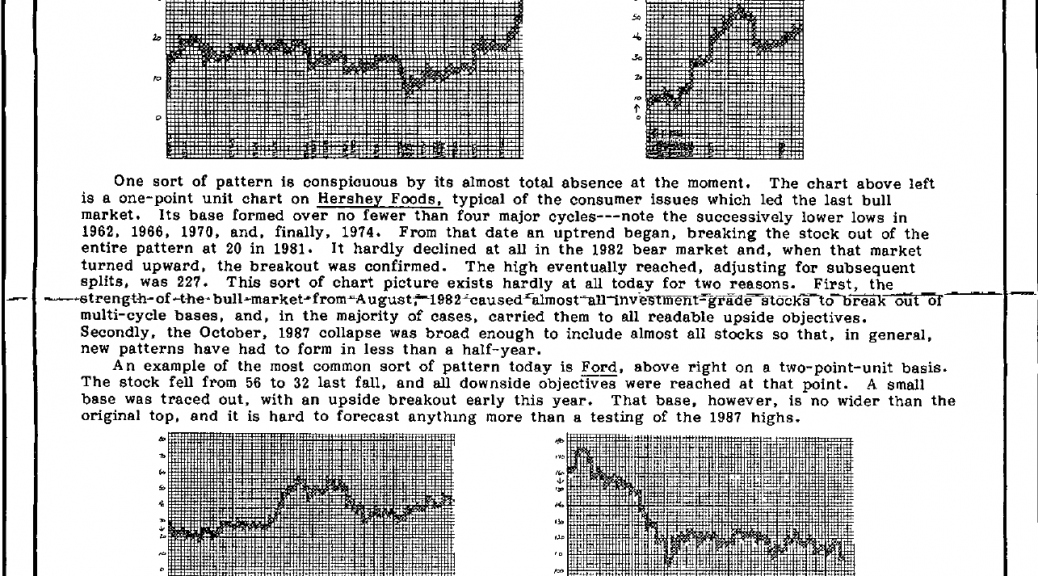 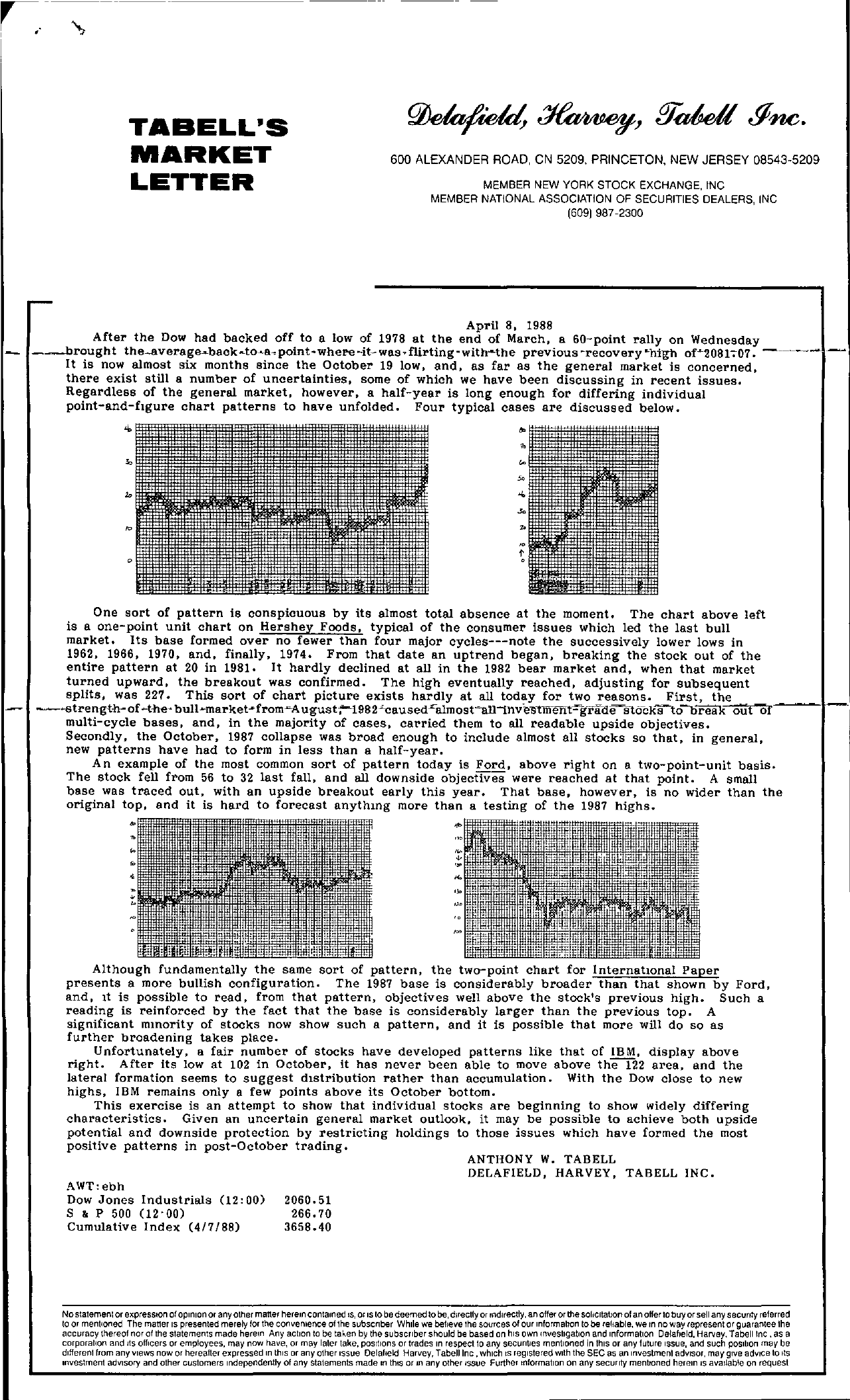 r , .. TABELL'S MARKET LETTER 600 ALEXANDER ROAD, CN 5209, PRINCETON, NEW JERSEY 08543-5209 MEMBER NEW YORK STOCK EXCHANGE, INC MEMBER NATIONAL ASSOCIATION OF SECURITIES DEALERS, INC (609) 987-2300 April 8, 1988 After the Dow had backed off to a low of 1978 at the end of March, a 60-point rally on Wednesday …………brought the–averageback ..to-'.-8-,point … where ..it- was .. flirting with….the previous recovery -high of-2 08 1.0;-07 —— It is now almost six months since the October 19 low, and, as far as the general market is concerned, there exist still 8 number of uncertainties, some of which we have been discussing in recent issues. Regardless of the general market, however, a half-year is long enough for differing individual ..point-and-flgure chart patterns to have unfolded. Four typicsl cases are discussed below One sort of pattern is conspicuous by its almost total absence at the moment. The chart above left is a one-point unit chart on Hershey Foods. typical of the consumer issues which led the last bull market. Its base formed over no fewer than four major cycles—note the successively lower lows in 1962, 1966, 1970, and, finally, 1974. From that date an uptrend began, breaking the stock out of the entire pattern at 20 in 1981. It hardly declined at all in the 1982 bear market and, when that market turned upward, the breakout was confirmed. The high eventually reached, adjusting for subsequent — splits, –streng-t- was h- of . 227. . .t-he- b uTllh…i.ms aBrkoertt..offrocmh-aAr tugpusitc–t;u–r1e98e2xi;st'scahusaerddlaylmoasttallantlondvaeySfotlrfftwiToIitreraasdo.enss.tbckFSitros-tDreathke'o-u'zt-oI—-1 multi-cycle bases, and, in the majority of cases, carried them to all readable upside objectives. Secondly, the October, 1987 collapse was broad enough to include almost all stocks so that, in general. new patterns have had to form in less than a half-year. An example of the most common sort of pattern today is Ford. above right on a two-point-unit basis. The stock fell from 56 to 32 last fall, and all downside objectives were reached at that point. A small base was traced out, with an upside breakout early this year. That base. however. is no wider than the original top. and it is hard to forecast anythmg more than a testing of the 1987 highs. Although fundamentally the same sort of pattern. the two-point chart for InternatIonal Paper presents a more bullish configuration. The 1987 base is considerably broader than that shown by Ford. and. It is possible to read, from that pattern, objectives well above the stock's previous high. Such a reading is reinforced by the fact that the base is considerably larger than the previous top. A significant mInority of stocks now show such a pattern. and it is possible that more will do so as further broadening takes place. Unfortunately. a fair number of stocks have developed patterns like that of IBM. display above right. After its low at 102 in OctOber. it has never been able to move above the 122 area, and the lateral formation seems to suggest dIstribution rather than accumulation. With the Dow close to new highs. IBM remains only a few points above its October bottom. This exercise is an attempt to show that individual stocks are beginning to show widely differing characteristics. Given an uncertain general market outlook. it may be possible to achieve both upside potential and downside protection by restricting holdings to those issues which have formed the most positive patterns in post-October trading. ANTHONY W. TABELL DELAFIELD, HARVEY, TABELL INC. AWTebh Dow Jones Industrials (12 00) 2060.51 S P 500 (12'00) 266.70 Cumulative Index (4/7/88) 3658.40 No statement or expresSIOn of opinion Of any other matter herein contained IS, or IS to be deemed to be, directly or Indirectly, an offer Oftha soliCitatIOn of an offer to buy or sell any security referred to or mentioned The matler IS presented merely for the convenience of the subscnber While we believe the sources of our Informahon to be reliable, we tn no way represent or guarantee the accuracy thereof nor of the statements made herein Any action to be talo..en by the subscriber should be based on hiS own investigation and Information Delafield, Harvey, Tabelllnc, as a corporation and liS officers or employees, may now have, or may laler lake, positions or trades In respecllo any secuntles mentioned In thiS or any future Issue, and such pOSllion may be different from any views now or hereafter expressed In thiS or any other Issue Delafield Harvey, labelllnc, which IS registered With the SEC as an Investmenl adVisor, may give advice to ItS Investment adVISOry and other customers Independently of any statements made In thiS or In any other Issue Further Information on any security mentioned herein IS available on request 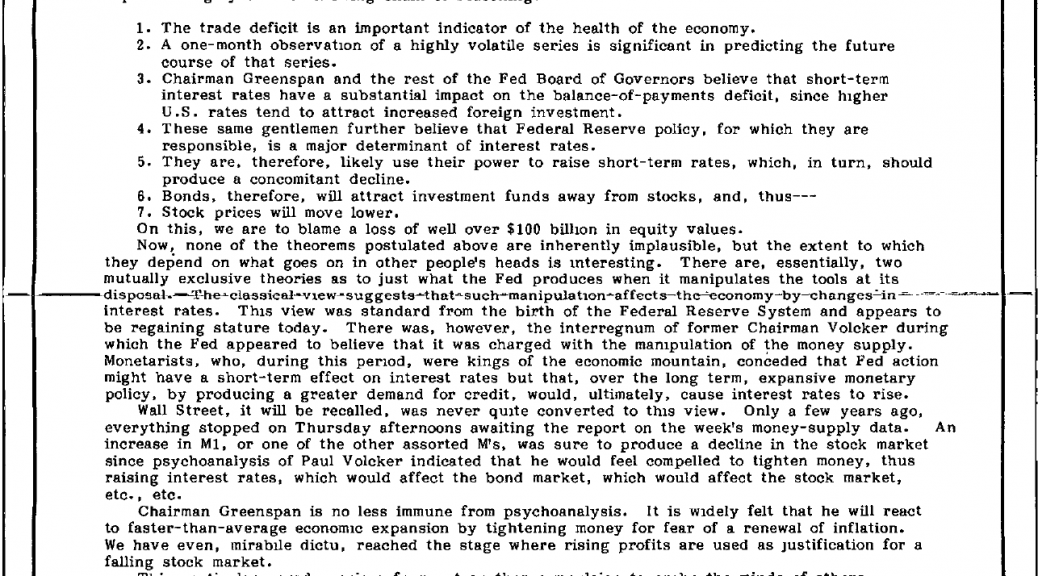 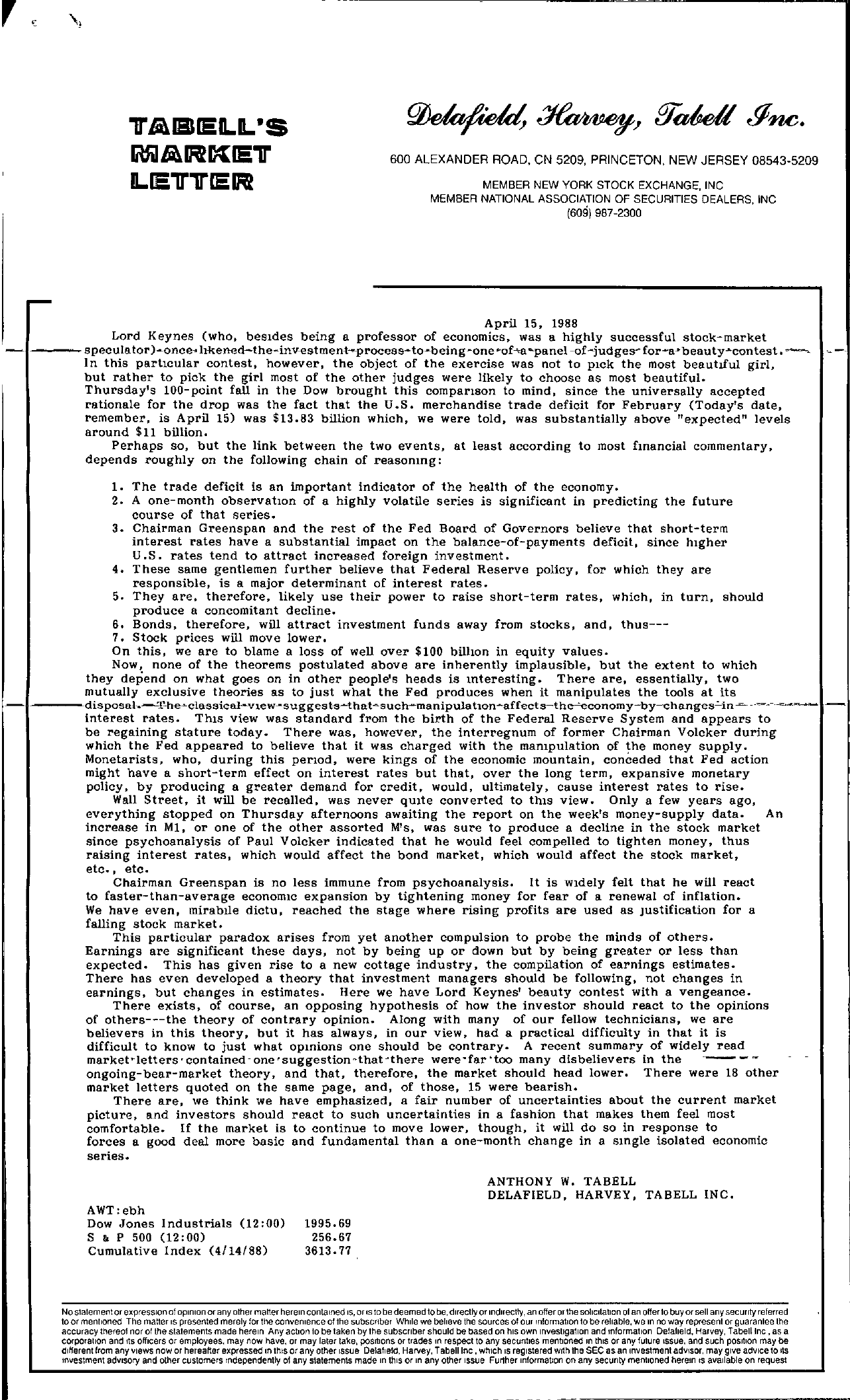 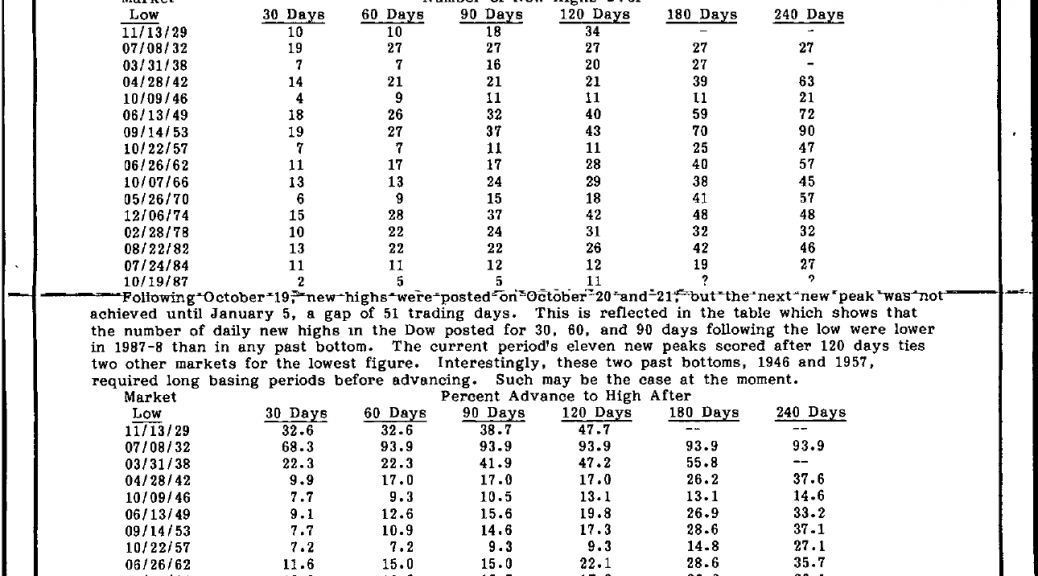 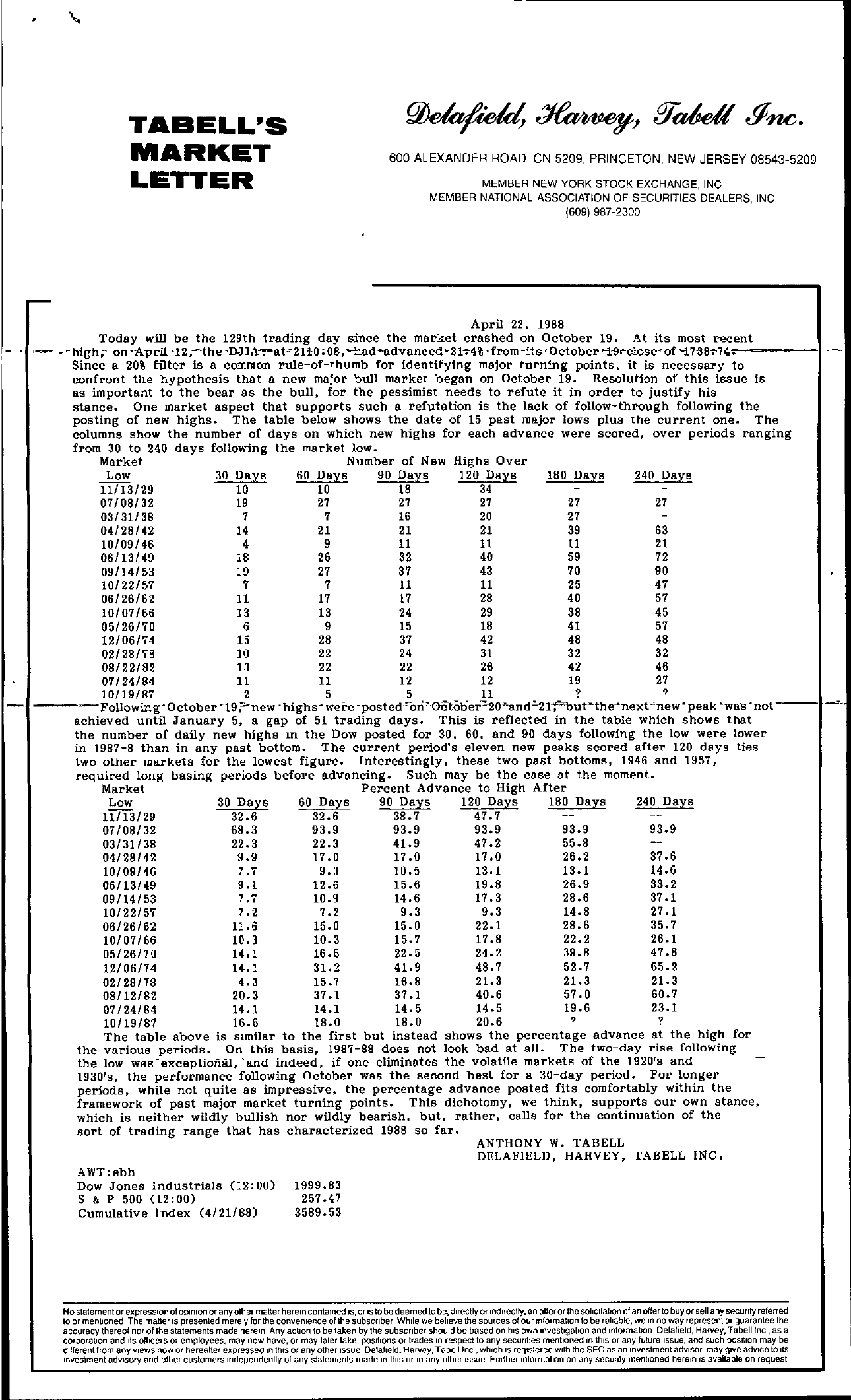 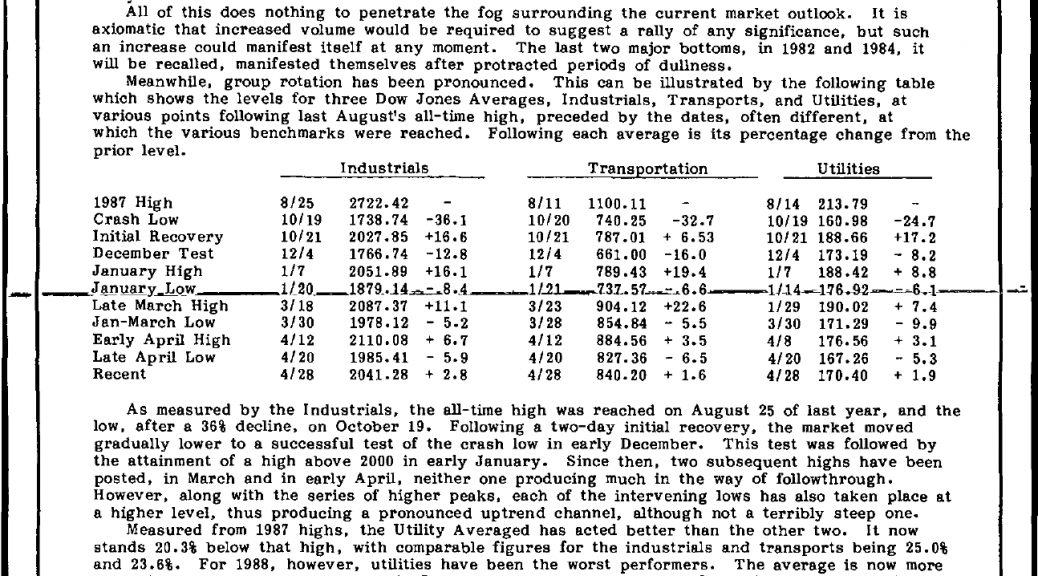 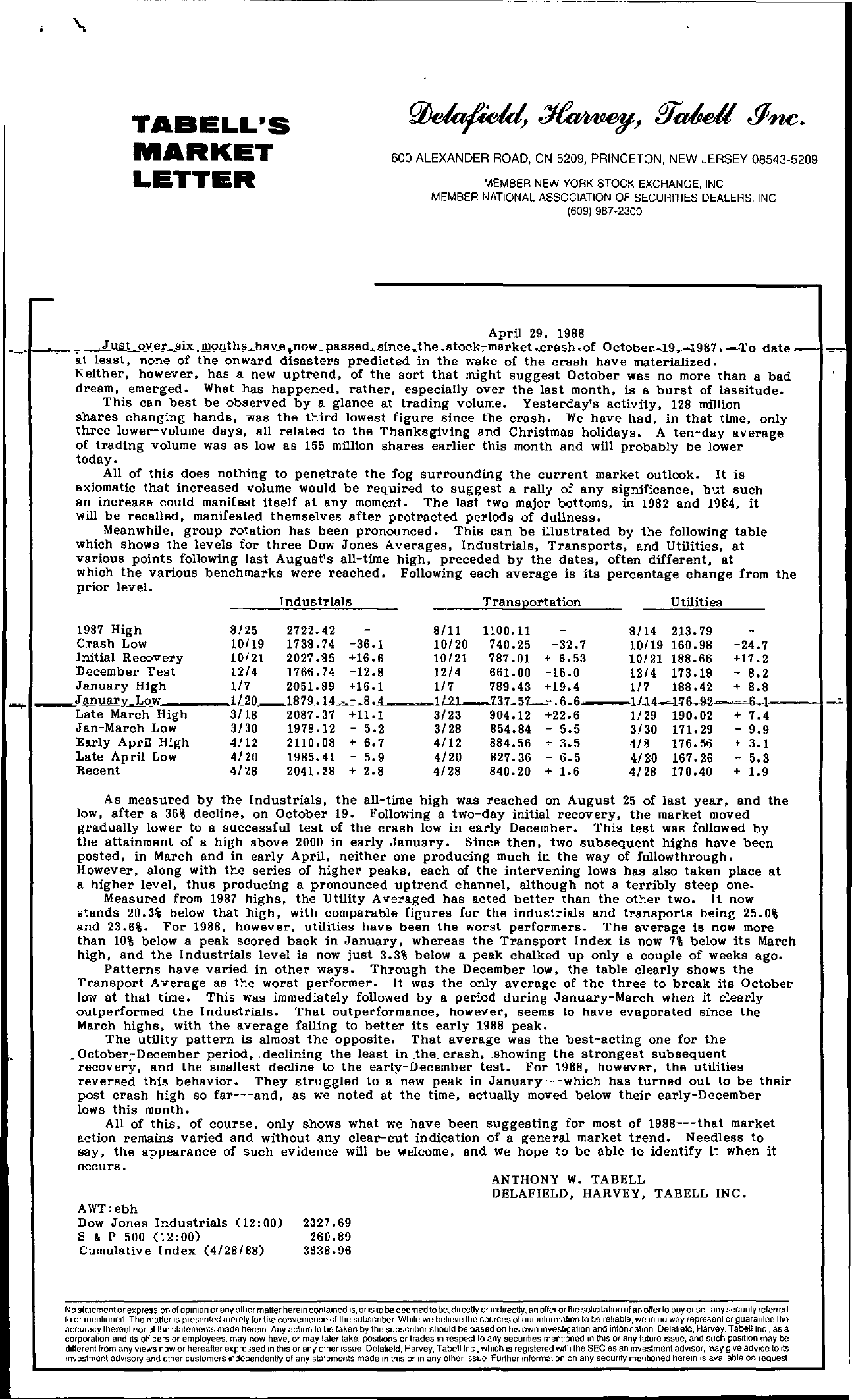 TABELL'S MARKET LETTER 600 ALEXANDER ROAD, CN 5209, PRINCETON, NEW JERSEY 08543-5209 MEMBER NEW YORK STOCK EXCHANGE, INC MEMBER NATIONAL ASSOCIATION OF SECURITIES DEALERS, INC (609) 987-2300 April 29, 1988 – at uLQv.ersix .m9Qth..J1avenow –P(!ssed–.since …the 8tockarket .crash of October…19.,1987. –To date least, none of the onward disasters predicted in the wake of the crash have materialized. Neither, however, has a new uptrend, of the sort that might suggest October was no more than a bad dream, emerged. What has happened, rather, especially over the last month, is a burst of lassitude. This can best be observed by a glance at trading volume. Yesterday's activity, 128 million shares changing hands, was the third lowest figure since the crash. We have had, in that time, only three lower-volume days, all related to the Thanksgiving and Christmas holidays. A ten-day average of trading volume was as low as 155 million shares earlier this month and will probably be lower today. AU of this does nothing to penetrate the fog surrounding the current market outlook. It is axiomatic that increased volume would be required to suggest a rally of any significance, but such an increase could manifest itself at any moment. The last two major bottoms, in 1982 and 1984, it will be recalled, manifested themselves after protracted periods of duUness. Meanwhile, group rotation has been pronounced. This can be illustrated by the following table which shows the levels for three Dow Jones Averages, Industrials, Transports, and Utilities, at various points following last August's all-time high, preceded by the dates, often different, at which the various benchmarks were reached. Following each average is its percentage change from the prior level. Industrials Transportation Utilities 1987 High Crash Low Initial Recovery December Test – January High – i fanuary–kow Late March High Jan-March Low Early April High Late April Low Recent 8/25 2722.42 10/19 1738.74 -36.1 10/21 2027.85 16.6 12/4 1766.74 -12.8 117 2051.89 16.1 U201879..14—.8.4 3/18 2087. 37 11.1 3/30 1978.12 – 5.2 4/12 2110.08 6.7 4/20 1985.41 – 5.9 4/28 2041.28 2.8 8/11 1100.11 10/20 740.25 -32.7 10/21 787.01 6.53 12/4 661. 00 -16.0 1/7 789.43 19.4 1/1131.576.6 3/23 904.12 22.6 3/28 854.84 – 5.5 4/12 884.56 3.5 4/20 827.36 – 6.5 4/28 840.20 1.6 8/14 213.79 10/19 160.98 -24.7 10/21 188.66 17.2 12/4 173.19 – 8.2 1/7 188.42 8.8 U14116.!l2–6.-1 1/29 190.02 7.4 3/30 171.29 – 9.9 4/8 176.56 3.1 4/20 167.26 – 5.3 4/28 170.40 1.9 As measured by the Industrials, the all-time high was reached on August 25 of last year, and the low, after a 36 decline, on October 19. Following a two-day initial recovery, the market moved gradually lower to a successful test of the crash low in early December. This test was followed by the attainment of a high above 2000 in early January. Since then, two subsequent highs have been posted, in March and in early April, neither one producing much in the way of followthrough. However, along with the series of higher peaks, each of the intervening lows has also taken place at a higher level, thus producing a pronounced uptrend channel, although not a terribly steep one. Measured from 1987 highs, the Utility Averaged has acted better than the other two. It now stands 20.3 below that high, with comparable figures for the industrials and transports being 25.0 and 23.6. For 1988, however, utilities have been the worst performers. The average is now more than 10 below a peak scored back in January, whereas the Transport Index is now 7 below its March high, and the Industrials level is now just 3.3 below a peak chalked up only a couple of weeks ago. Patterns have varied in other ways. Through the December low, the table clearly shows the Transport Average as the worst performer. It was the only average of the three to break its October low at that time. This was immediately foUowed by a period during January-March when it clearly outperformed the Industrials. That Qutperformance. however, seems to have evaporated since the March highs, with the average failing to better its early 1988 peak. The utility pattern is almost the opposite. That average was the best-acting one for the October.-December period. ,declining the least in .the. crash.showing the strongest subsequent recovery, and the smallest decline to the early-December test. For 1988, however, the utilities reversed this behavior. They struggled to a new peak in January—which has turned out to be their post crash high so far—and, as we noted at the time, actually moved below their early-December lows this month. All of this, of course, only shows what we have been suggesting for most of 1988—that market action remains varied and without any clear-cut indication of a general market trend. Needless to say. the appearance of such evidence will be welcome. and we hope to be able to identify it when it occurs. ANTHONY W. TABELL DELAFIELD, HARVEY, TABELL INC. AWTebh Dow Jones Industrials (12 00) 2027.69 S & P 500 (1200) 260.89 Cumulative Index (4/28/88) 3638.96 — NO statement or expression of opInion or any other matter herein contained IS, or IS to be deemed to be, directly or Indirectly, an offeror the solICitation of an oHerta buyor sell any securrty relerred to or mentioned The matler IS presented merely for the convenience of the subscriber While we beheve the sources 01 our Information to be rehable, we In no way represent or guarantee the accuracy thereol norolthe statements made herein Any action to be taken by the subscriber should be based on hIS own investigation and InformaMn Delafield, Harvey, Tabelllnc, as a corporation and Its officers or employees, may now have, or may laler take, posrllons or trades ,n respeclto any securrlles menlloned In thiS or any future ISsue, and such osltlon may be different from any views nowor hereafter expressed In thIS or any other Issue Delafield, Harvey, Tabelllnc, which IS registered With the SEC as an Investment adVisor, may give adVice to rls Investment adVISOry and other customers Independently of any statements made In thiS or In any other Issue FUr1her Information on any security mentioned herein IS available on request