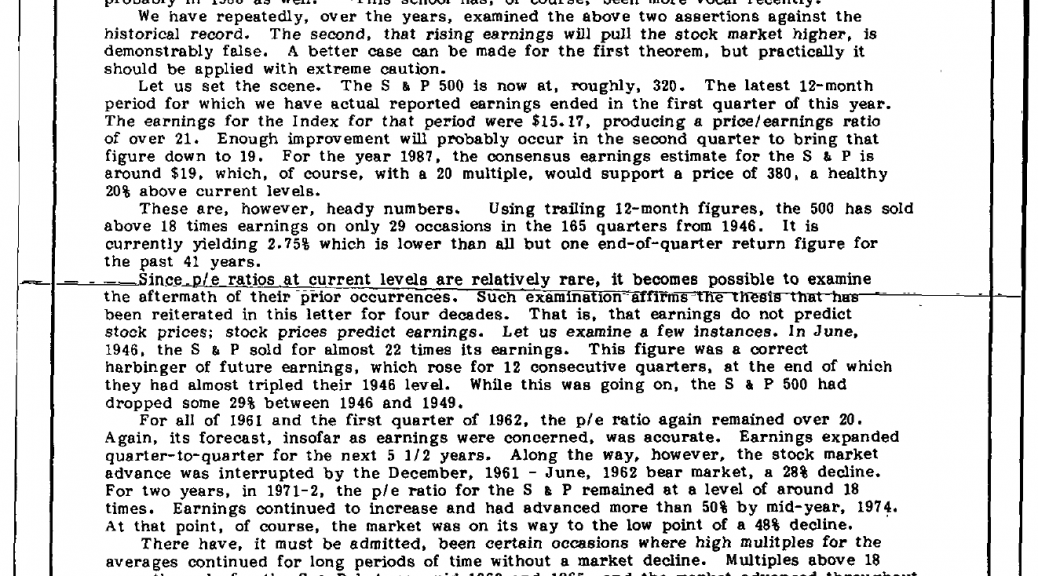 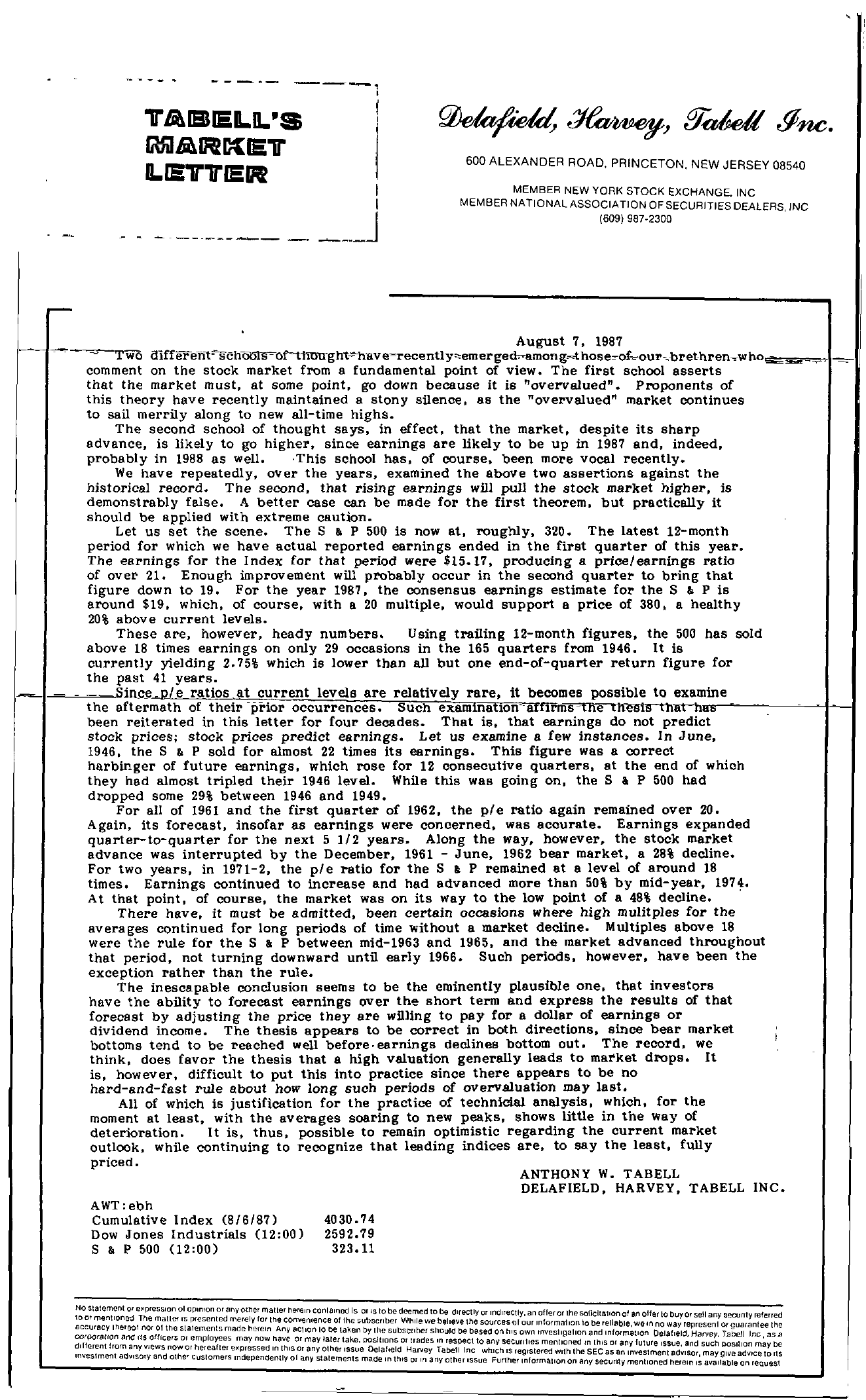 – – – – ,, vlilImIELL'S rMiI&RIEV L IEVTIER – – ————– , 600 ALEXANDER ROAD. PRINCETON. NEW JERSEY 08540 MEMBER NEW YORK STOCK EXCHANGE. INC MEMBER NATIONAL ASSOCIATION OF SECURITIES DEALERS. INC (609) 987-2300 1 – -'-Two aiffere1'it'SCh06lSofttrnu-ght-'-h-averecentlyemeArguegubsatmo7H,gAh1o9s8e7ofour–bret-hrenwho —- comment on the stock market from a fundamental point of view. The first school asserts that the market must, at some point, go down because it is overvalued. Proponents of this theory have recently maintained a stony Silence, as the overvalued market continues to sail merrily along to new alltime highS. The second school of thought says, in effect, that the market, despite its sharp advance, is likely to go higher, since earnings are likely to be up in 1987 and, indeed, probably in 1988 as well. This school has, of course, been more vocal recently. We have repeatedly, oVer the years, examined the above two assertions against the historical record. The second, that rising earnings will pull the stock market higher, is demonstrably false. A better case can be made for the first theorem, but practically it should be applied with extreme caution. Let us set the scene. The S P 500 is now at, roughly, 320. The latest 12-month period for Which we have actual reported earnings ended in the first quarter of this year. The earnings for the Index for that period were 15.17, producing a price/earnings ratio of over 21. Enough improvement will probably occur in the second quarter to bring that figure down to 19. For the year 1987, the consensus earnings estimate for the S P is around 19, whiCh, of course, with a 20 multiple, would support a price of 380, a healthy 20 above current levels. These are, however, heady numbers. Using trailing 12-month figures, the 500 has sold above 18 times earnings on only 29 occasions in the 165 quarters from 1946. It is currently yielding 2.75 which is lower than all but one end-of-quarter return figure for the ,ast 41 years. 1Since p/ e ratios at current levels are relatively rare, it becomes possible to examine the aftermath of their -prior occurrences. Such examlnailon–atflrliiF'Ule tnesls lhm–h…—I been reiterated in this letter for four decades. That is, that earnings do not predict stock prices; stock prices predict earnings. Let us examine a few instances. In June, 1946, the S P sold for almost 22 times Its earnings. This figure was a correct harbinger of future earnings, which rose for 12 consecutive quarters, at the end of which they had almost tripled their 1946 level. While this was going on, the S P 500 had dropped some 29 between 1946 and 1949. For all of 1961 and the first quarter of 1962, the pIe ratio again remained over 20. Again, its forecast, insofar as earnings were concerned, was accurate. Earnings expanded quarter-to-quarter for the next 5 1/2 years. Along the way, however, the stock market advance was interrupted by the December, 1961 – June, 1962 bear market, a 28 decline. For two years, in 1971-2, the pie ratio for the S P remained at a level of around 18 times. Earnings continued to increase and had advanced more than 50 by mid-year, 1974. At that point, of course, the market was on its way to the low point of a 48 decline. . There have, it must be admitted, been certain occasions where high mulitples for the averages continued for long periods of time without a market decline. Multiples above 18 were the rule for the S P between mid-1963 and 1965, and the market advanced throughout that period, not turning downward until early 1966. Such periods, however, have been the exception rather than the rule. The inescapable conclusion seems to be the eminently plausible one, that investors have the ability to forecast earnings over the short term and express the results of that forecast by adjusting the price they are willing to pay for a dollar of earnings or dividend income. The thesis appears to be correct in both directions, since bear market bottoms tend to be reached well before.earnings declines bottom out. The record, we think, does favor the thesis that a high valuation generally leads to market drops. It is, however, difficult to put this into practice since there appears to be no hard-and-fast rule about how long such periods of overvaluation may last. All of which is justification for the practice of technicial analysis, Which, for the moment at least, with the averages soaring to new peaks, shows little in the way of deterioration. It is, thus, possible to remain optimistic regarding the current market outlook, While continuing to recognize that leading indices are, to say the least, fully priced. ANTHONY W. TAB ELL DELAFIELD, HARVEY, TABELL INC. AWTebh Cumulative Index (8/6/87) Dow Jones Industrials 0200) S P 500 (1200) 4030.74 2592.79 323.11 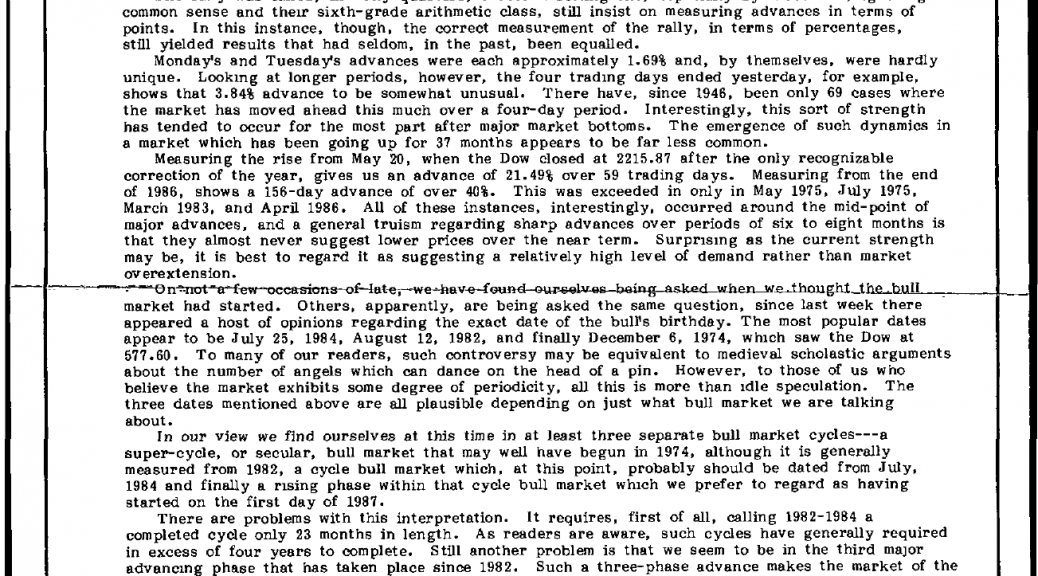 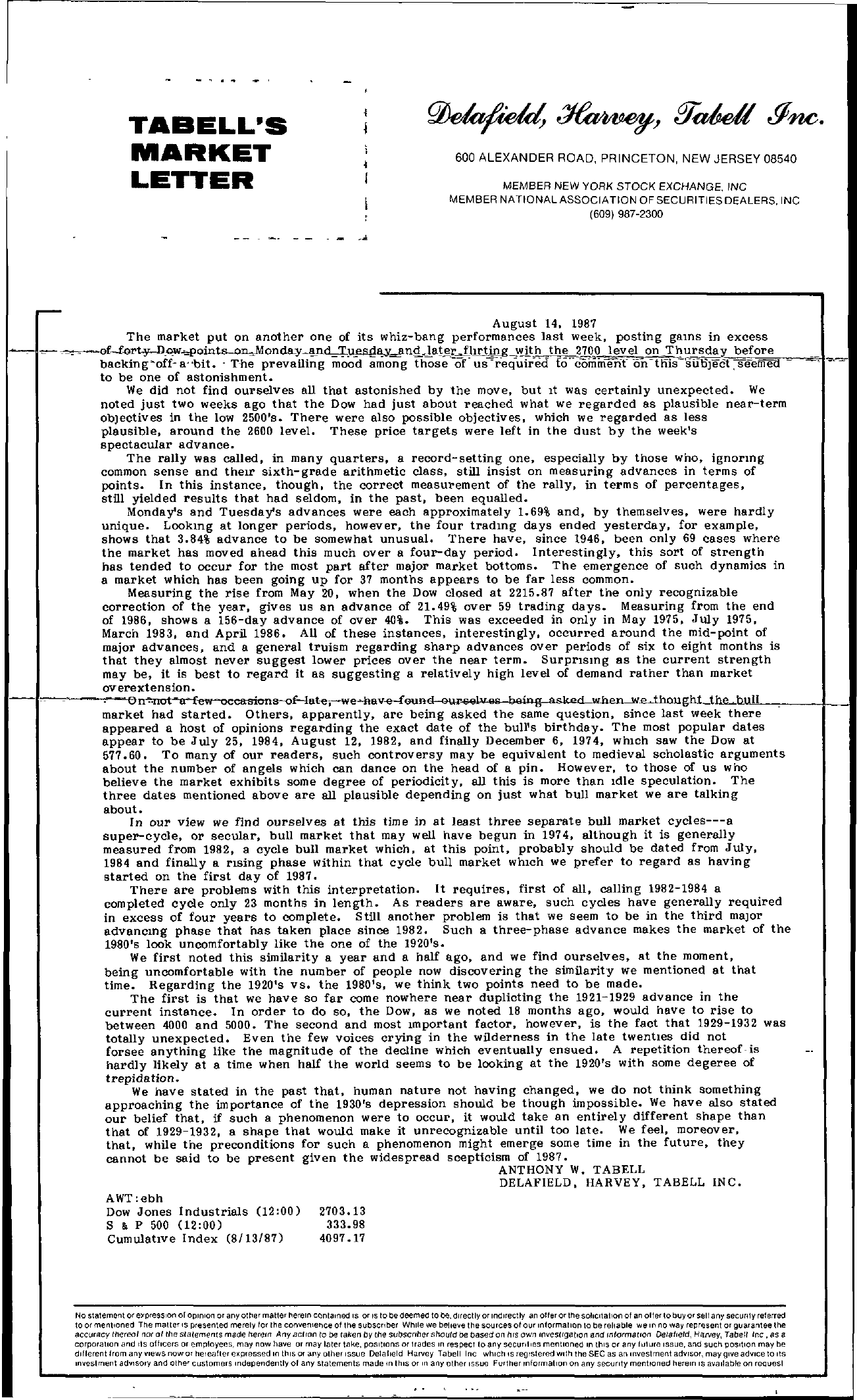 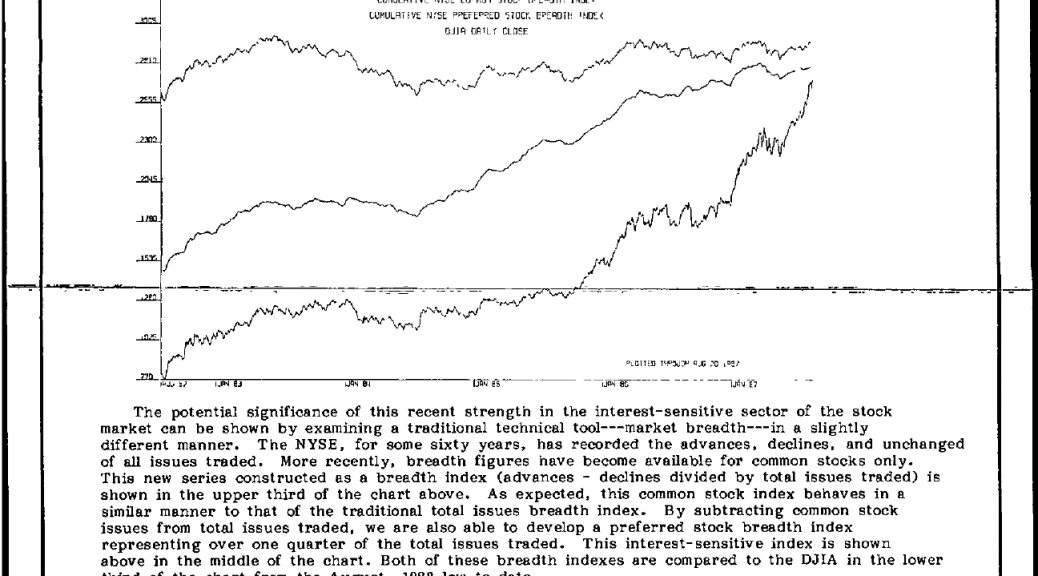 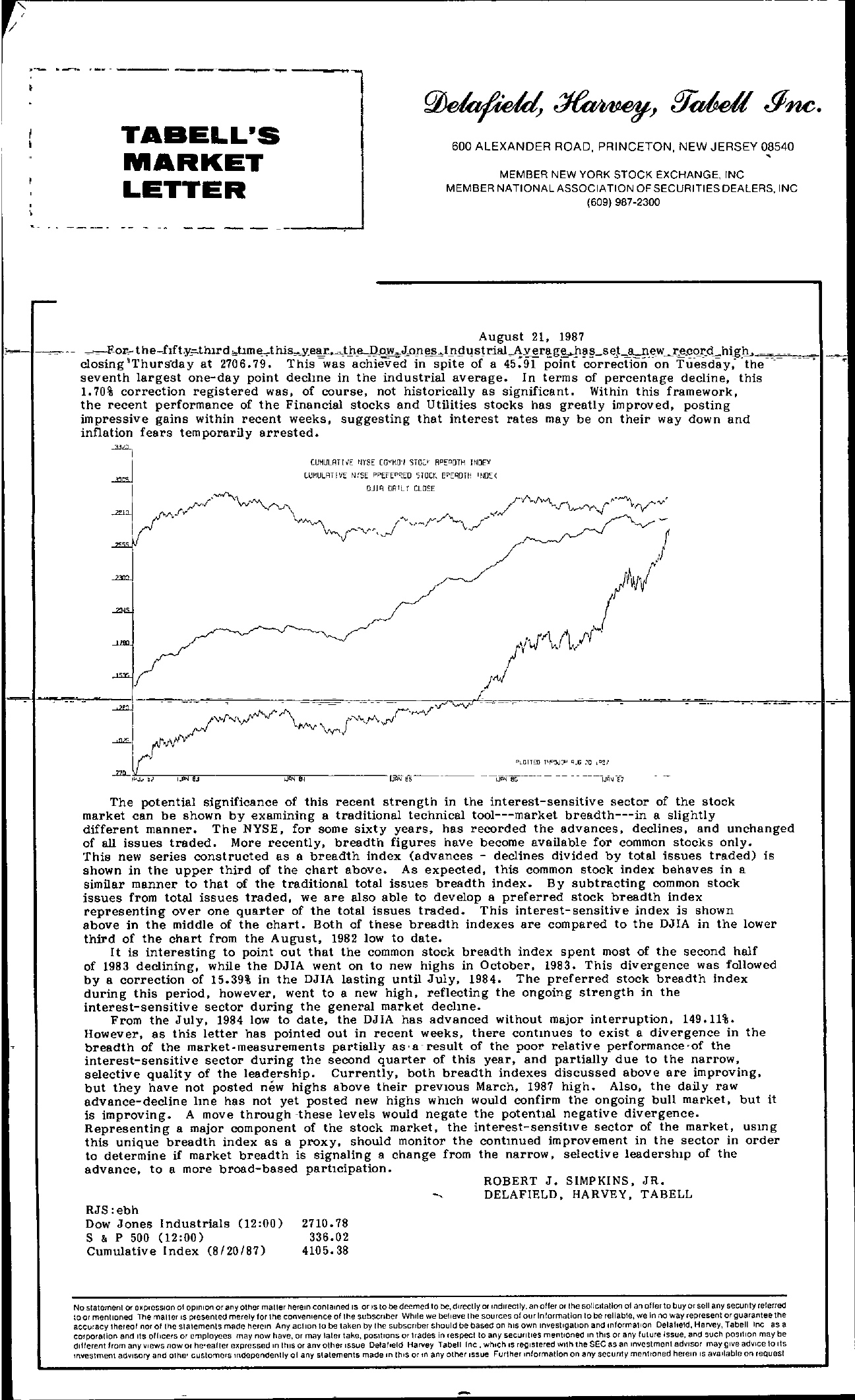 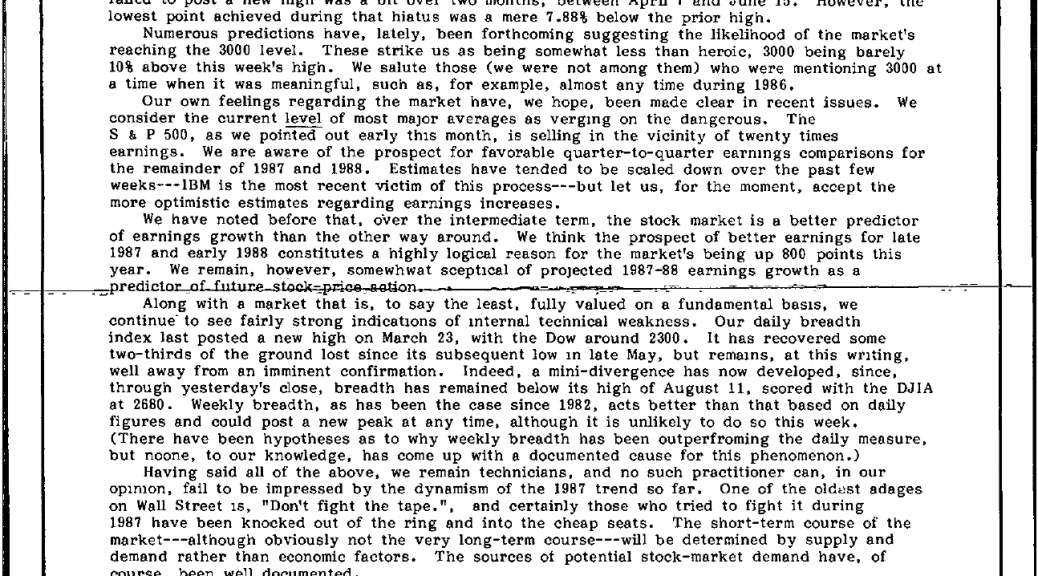 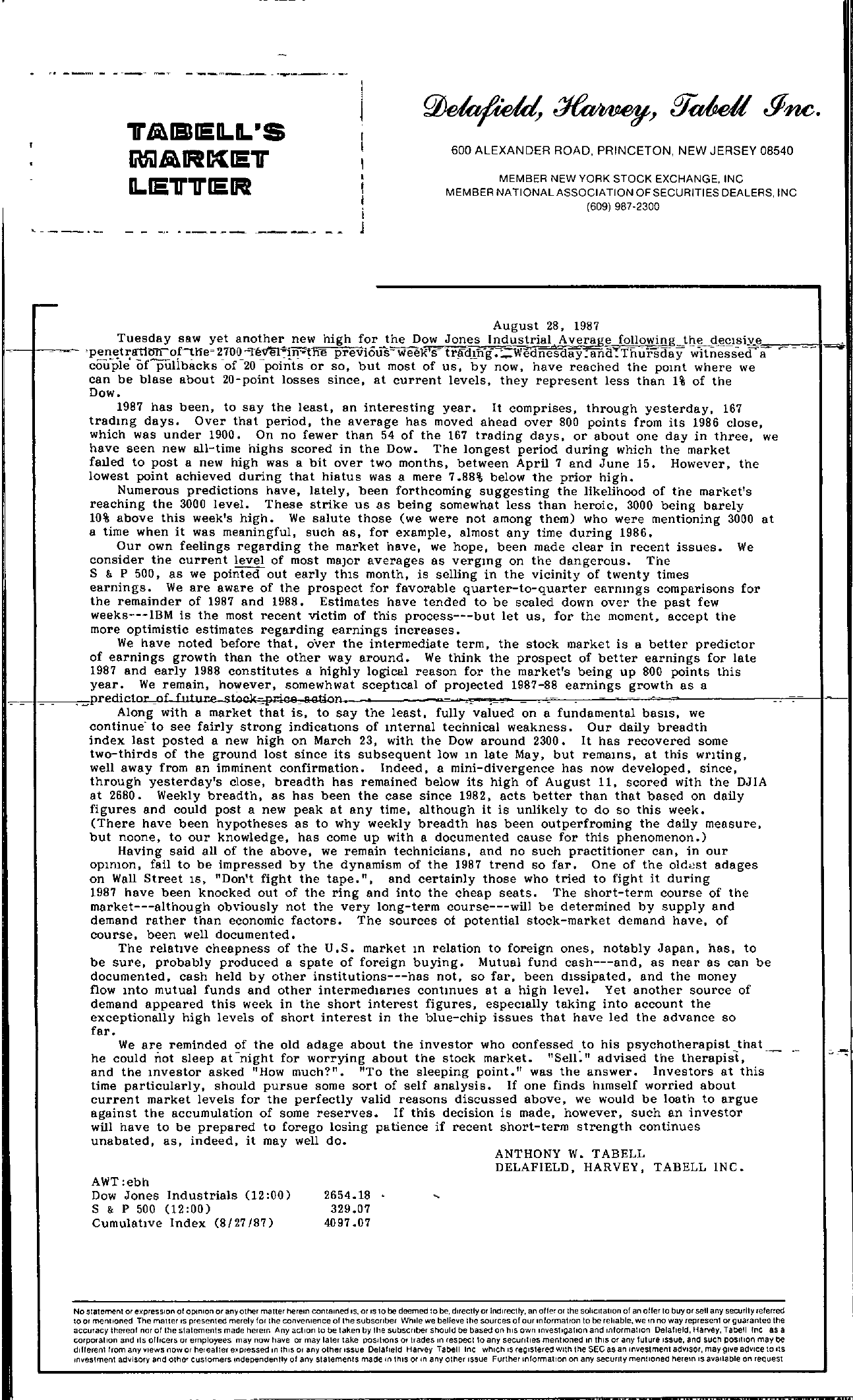