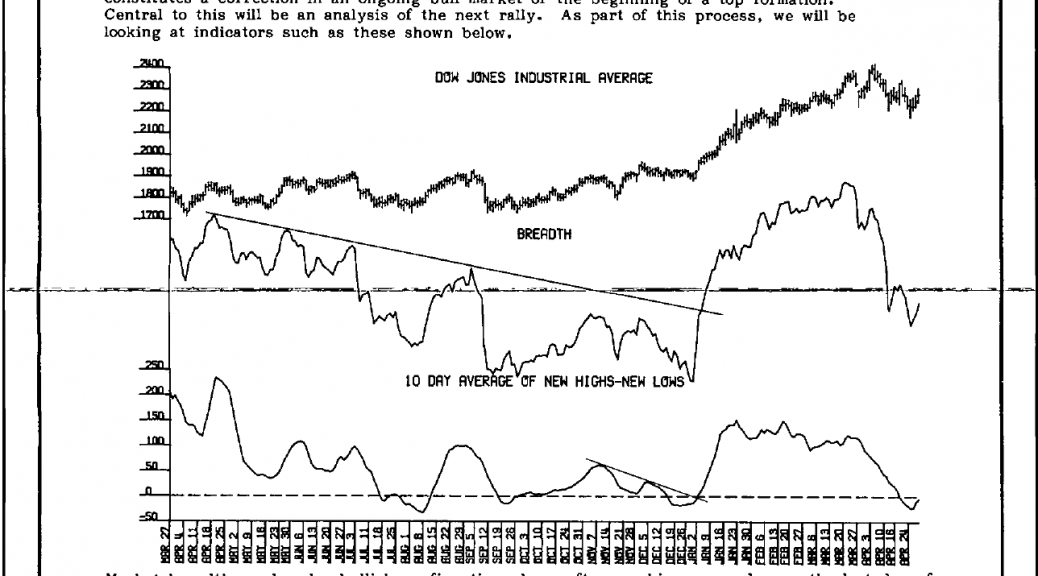 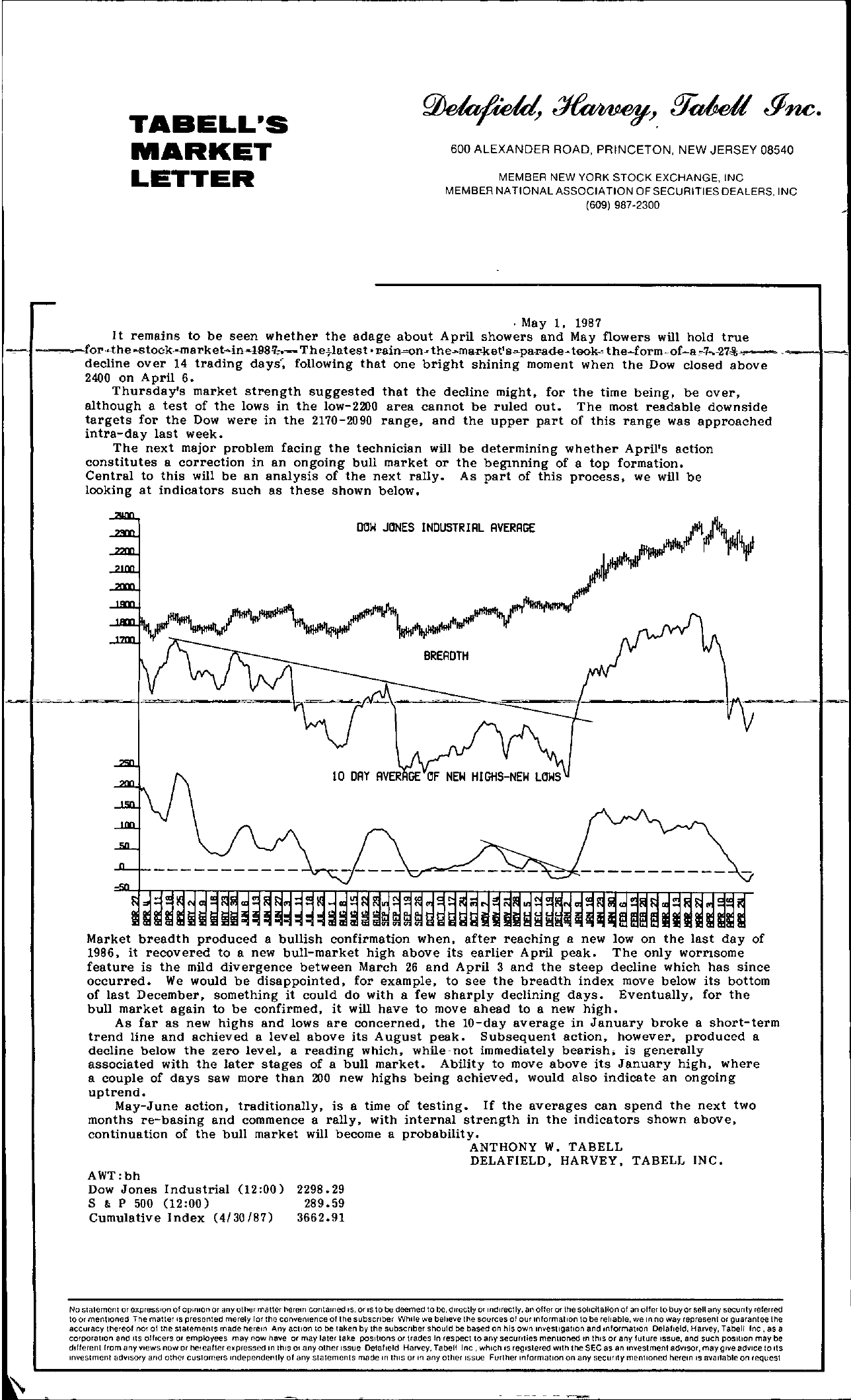 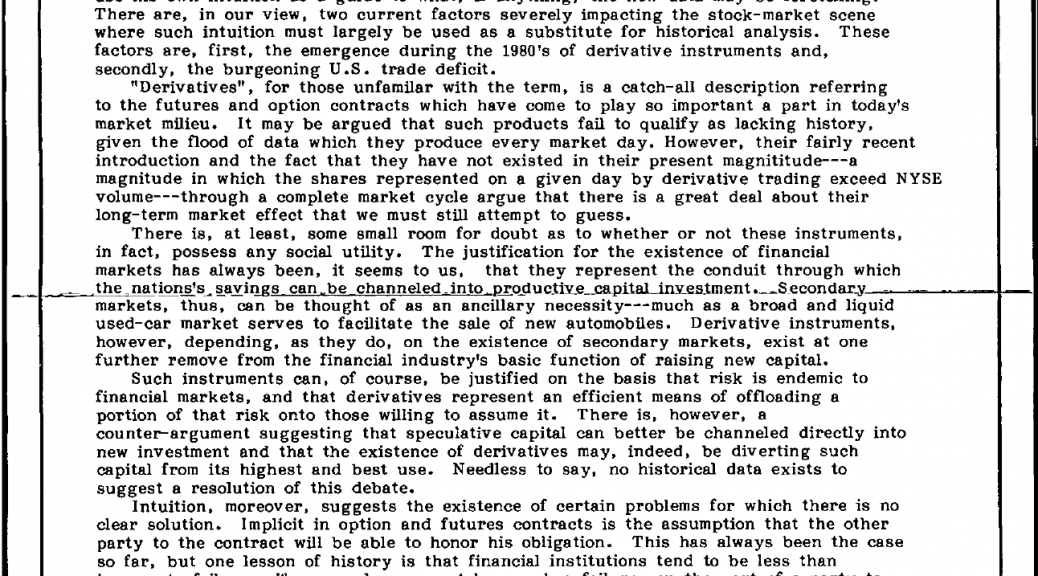 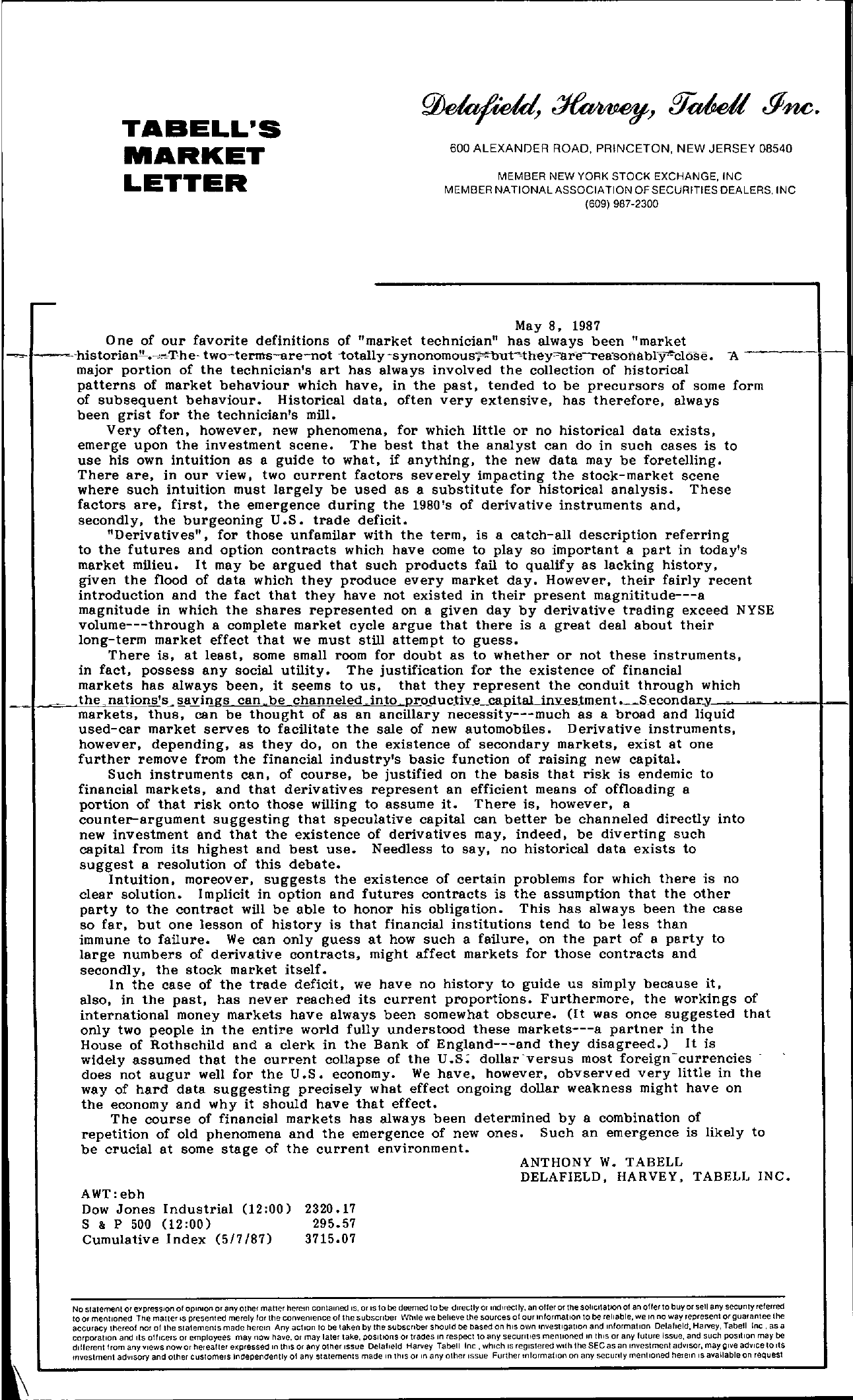 — TABELL'S MARKET LETTER 600 ALEXANDER ROAD. PRINCETON. NEW JERSEY 08540 MEMBER NEW YORK STOCK EXCHANGE. INC MEMBER NATIONAL ASSOCIATION OF SECURITIES DEALERS. INC (609) 987-2300 May 8, 1987 One of our favorite definitions of market technician has always been market -historian!L.-The- twoterms-arenot 'totally-synonomousrbut'theyare-,.ea'SOfi9.bl-rclOlle. A – – – – – 1 – – major portion of the technician's art has always involved the collection of historical patterns of market behaviour which have, in the past, tended to be precursors of some form of subsequent behaviour. Historical data, often very extensive, has therefore, always been grist for the technician's mill. Very often, however, new phenomena, for which little or no historical data exists, emerge upon the investment scene. The best that the analyst can do in such cases is to use his own intuition as a guide to what, if anything, the new data may be foretelling. There are, in our view, two current factors severely impacting the stock-market scene where such intuition must largely be used as a substitute for historical analysis. These factors are, first, the emergence during the 1980's of derivative instruments and, secondly, the burgeoning U.S. trade deficit. Derivatives, for those unfamilar with the term, is a catch-all description referring to the futures and option contracts which have come to play so important a part in today's market milieu. It may be argued that such products fail to qualify as lacking history, given the flood of data which they produce every market day. However, their fairly recent introduction and the fact that they have not existed in their present magnititude—a magnitude in which the shares represented on a given day by derivative trading exceed NYSE volume—through a complete market cycle argue that there is a great deal about their long-term market effect that we must still attempt to guess. There is, at least, some small room for doubt as to whether or not these instruments, in fact, possess any social utility. The justification for the existence of financial markets has always been, it seems to us, that they represent the conduit through which thenations's.ayiQgs can be channeledinto Ilro.-!lucliYe capital imces!ment.S,econdar.y t. markets, thus, can be thought of as an ancillary necessity—much as a broad and liquid used-car market serves to facilitate the sale of new automobiles. Derivative instruments, however, depending, as they do, on the existence of secondary markets, exist at one further remove from the financial industry's basic function of raising new capital. Such instruments can, of course, be justified on the basis that risk is endemic to financial markets, and that derivatives represent an efficient means of offloading a portion of that risk onto those willing to assume it. There is, however, a counter-argument suggesting that speculative capital can better be channeled directly into new investment and that the existence of derivatives may, indeed, be diverting such capital from its highest and best use. Needless to say, no historical data exists to suggest a resolution of this debate. Intuition, moreover, suggests the existence of certain problems for which there is no clear solution. Implicit in option and futures contracts is the assumption that the other party to the contract will be able to honor his obligation. This has always been the case so far, but one lesson of history is that financial institutions tend to be less than immune to failure. We can only guess at how such a failure, on the part of a party to large numbers of derivative contracts, might affect markets for those contracts and secondly, the stock market itself. In the case of the trade deficit, we have no history to guide us simply because it, also, in the past, has never reached its current proportions. Furthermore, the workings of international money markets have always been somewhat obscure. (It was once suggested that only two people in the entire world fully understood these markets—a partner in the House of Rothschild and a clerk in the Bank of England—and they disagreed.) It is widely assumed that the current collapse of the U.S; dollar'versus most foreign-currencies does not augur well for the U.S. economy. We have, however, obvserved very little in the way of hard data suggesting precisely what effect ongoing dollar weakness might have on the economy and why it should have that effect. The course of financial markets has always been determined by a combination of repetition of old phenomena and the emergence of new ones. Such an emergence is likely to be crucial at some stage of the current environment. ANTHONY W. TABELL DELAFIELD, HARVEY, TAB ELL INC. AWTebh Dow Jones Industrial (1200) 2320.17 S & P 500 (1200) 295.57 Cumulative Index (5/7/87) 3715.07 No statement or epresSjon of OPinIon or any Olllel matter herein contained 1, or IS to be deemed to be dlreclly or mdlrectly, an offer or the SOliCitatIOn of an offer to buy or sell any secunty referred loor mentioned The maIler IS presented merely lor the convenience of the subscriber WhIle we beheve the sources 01 our Inlormatlon to be reliable, we In no way represent or guarantee the accuracy thereof nor of the statements made herem Any action to be taken by the subSCriber should be based on hiS own investigation and information Delafield, Harvey, Tabell Inc, as a corporation and ItS olflcers or employees may now have, or may later take, poSItions or trades m respect 10 any securities mentioned In thiS or any future Issue, and such position may be dllferent Irom any views nowor hereafter expressed In thiS or any other Issue Delafield Harvey TaOOIl Inc, which IS registered wllh the SECasan Investment adVisor, mayQlve adVice to Its Investment adVISOry and other customers Independently 01 any statements made In thiS or In any other Issue Further mlormatlon on any security mentioned herein IS avaUableon request 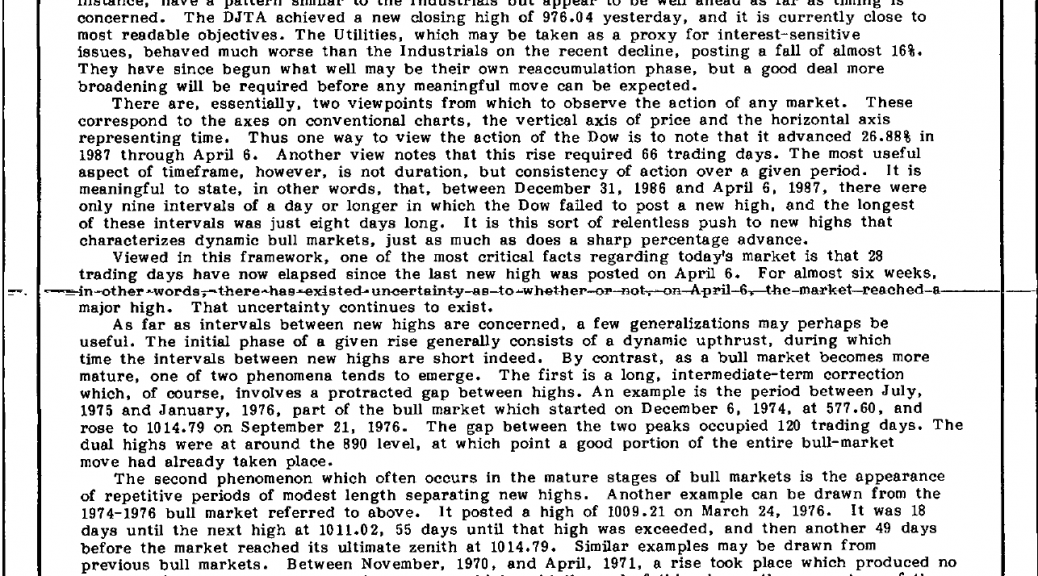 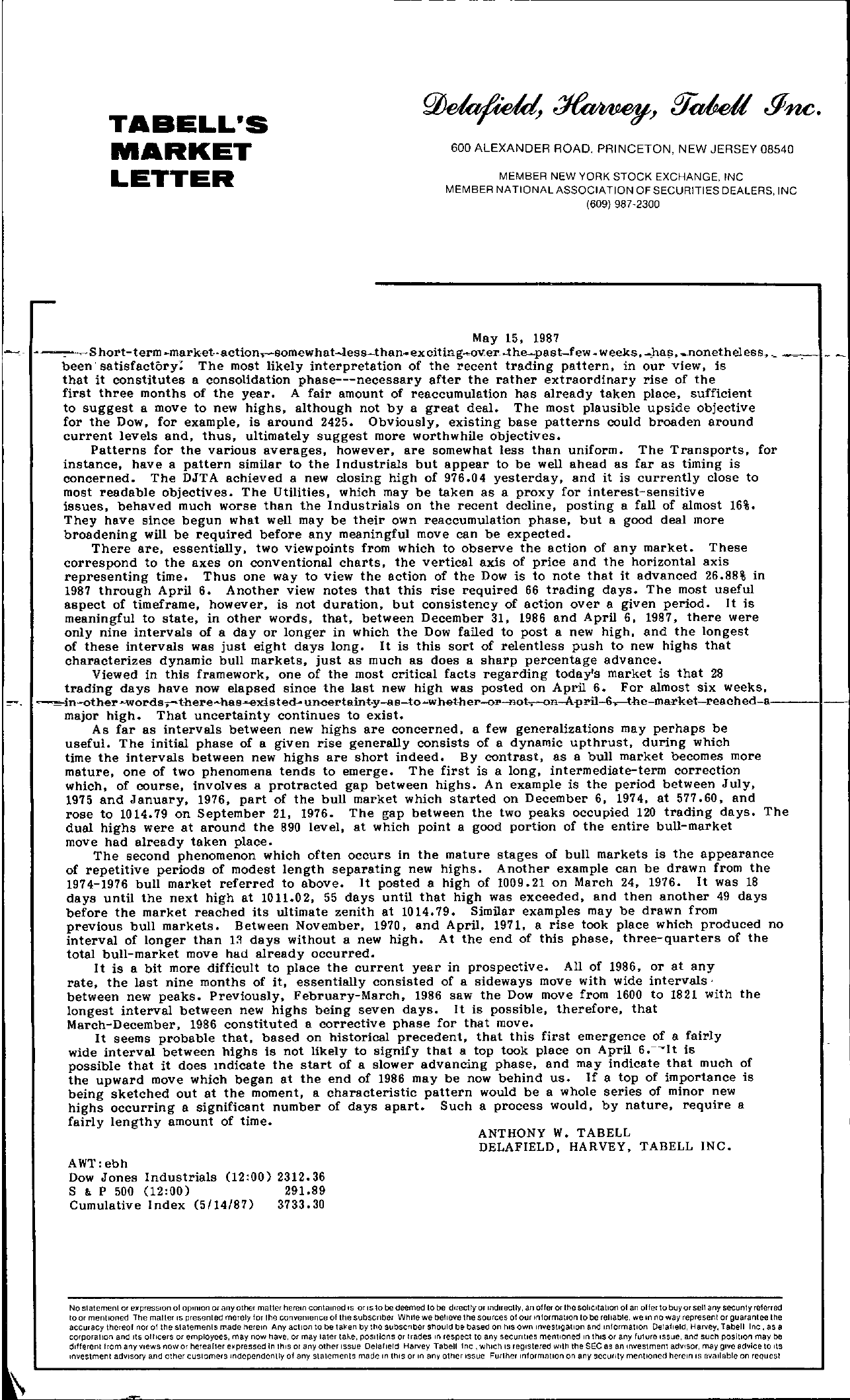 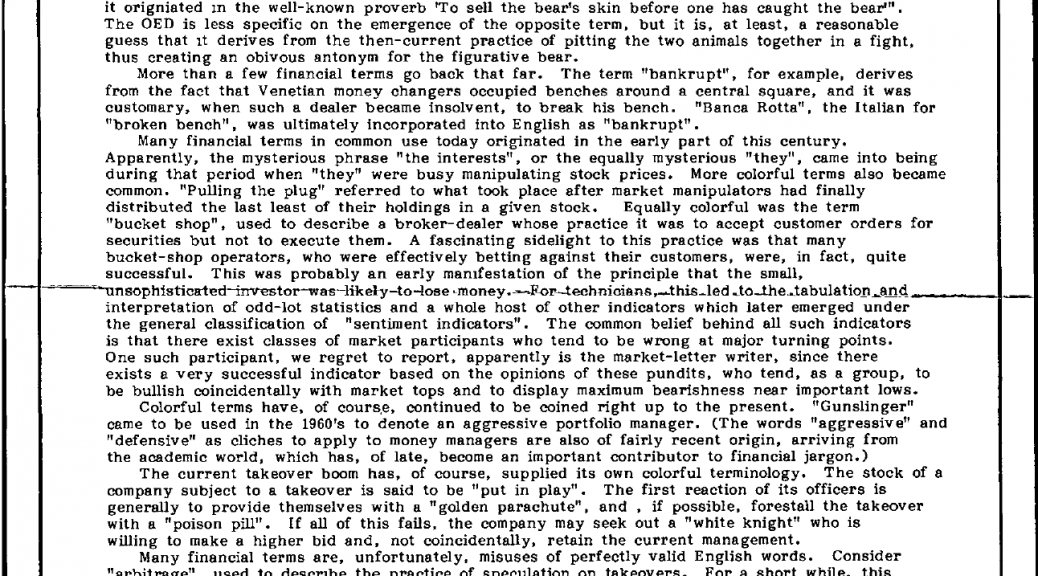 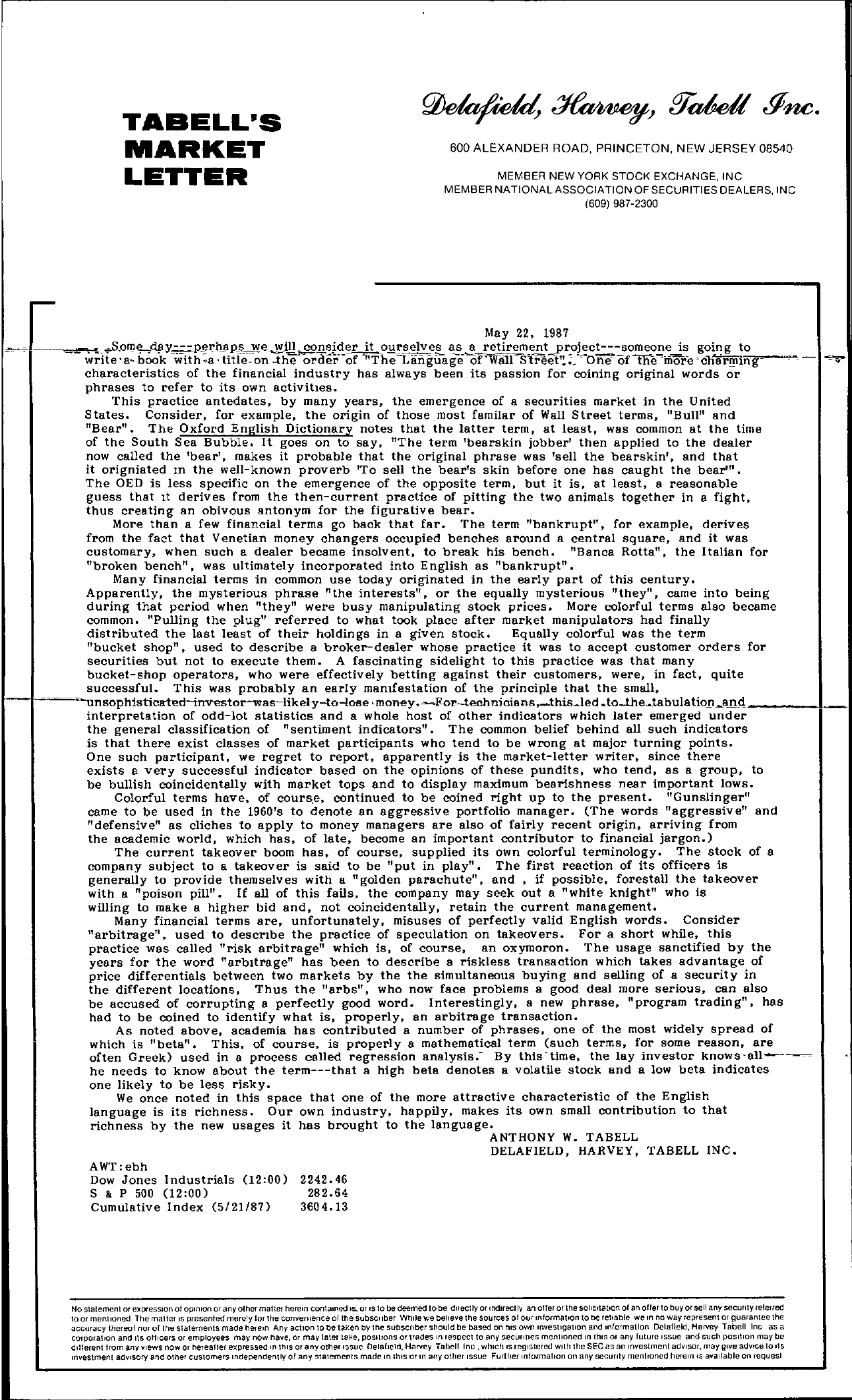 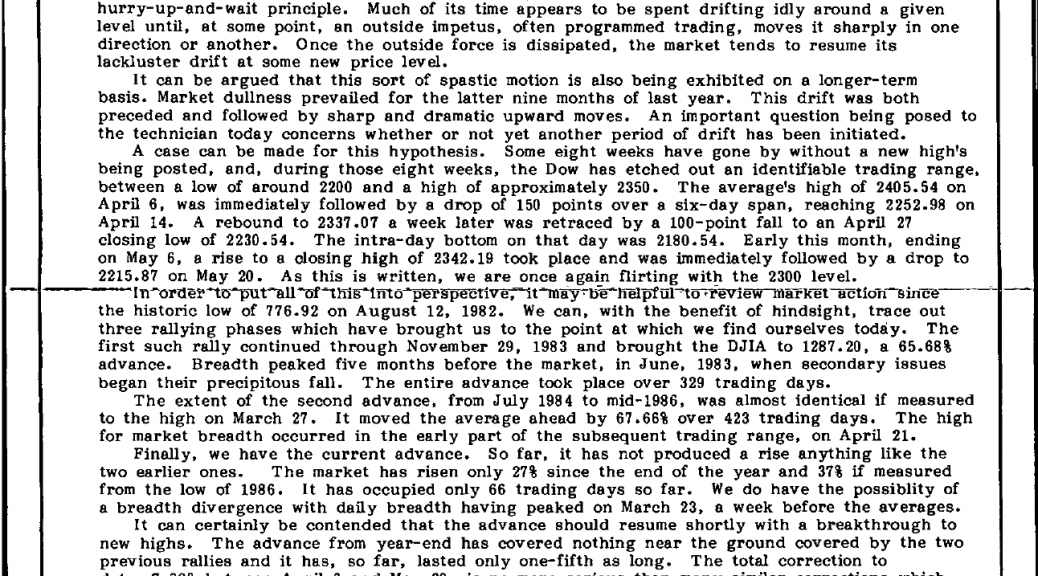 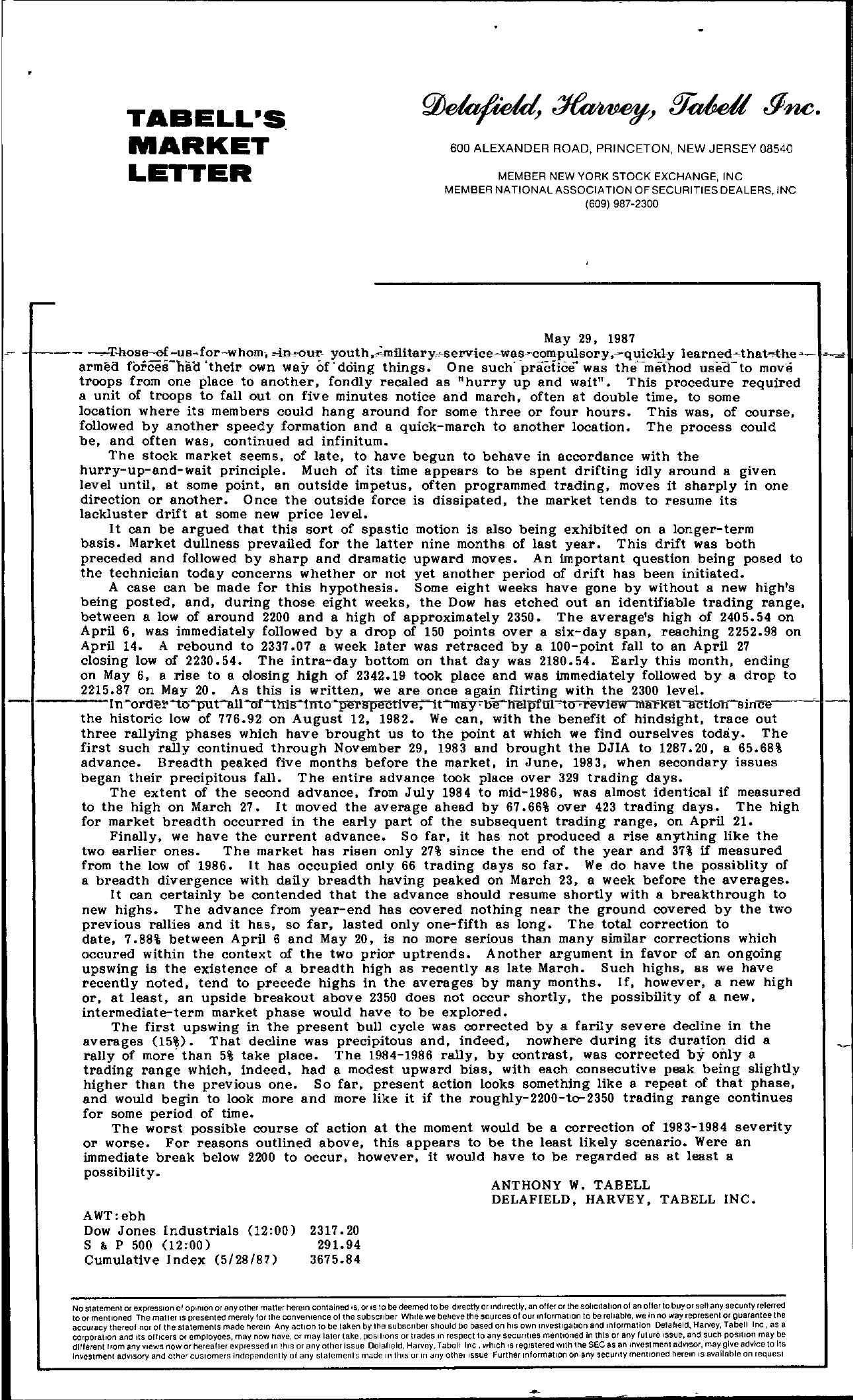