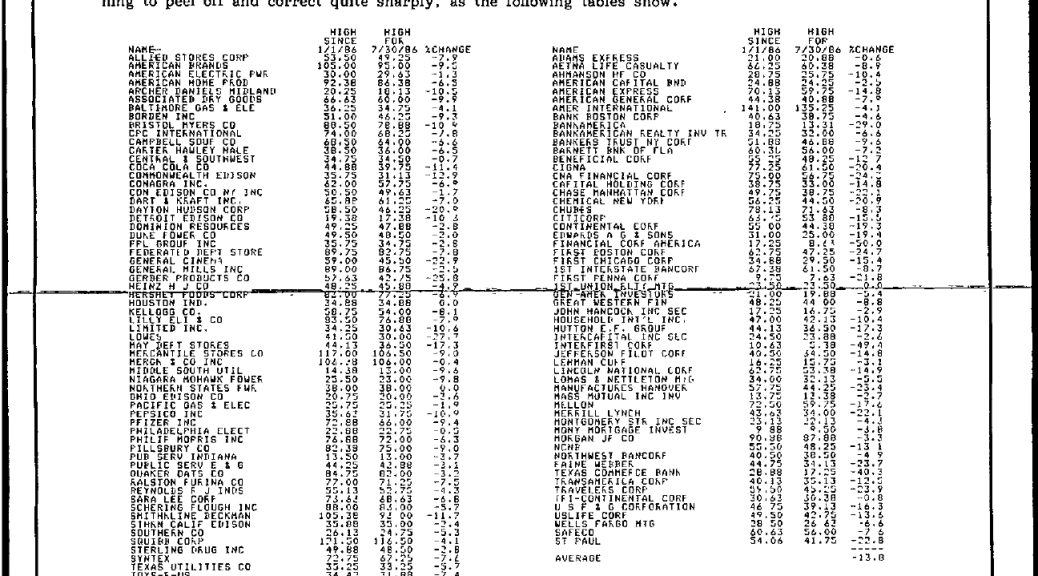 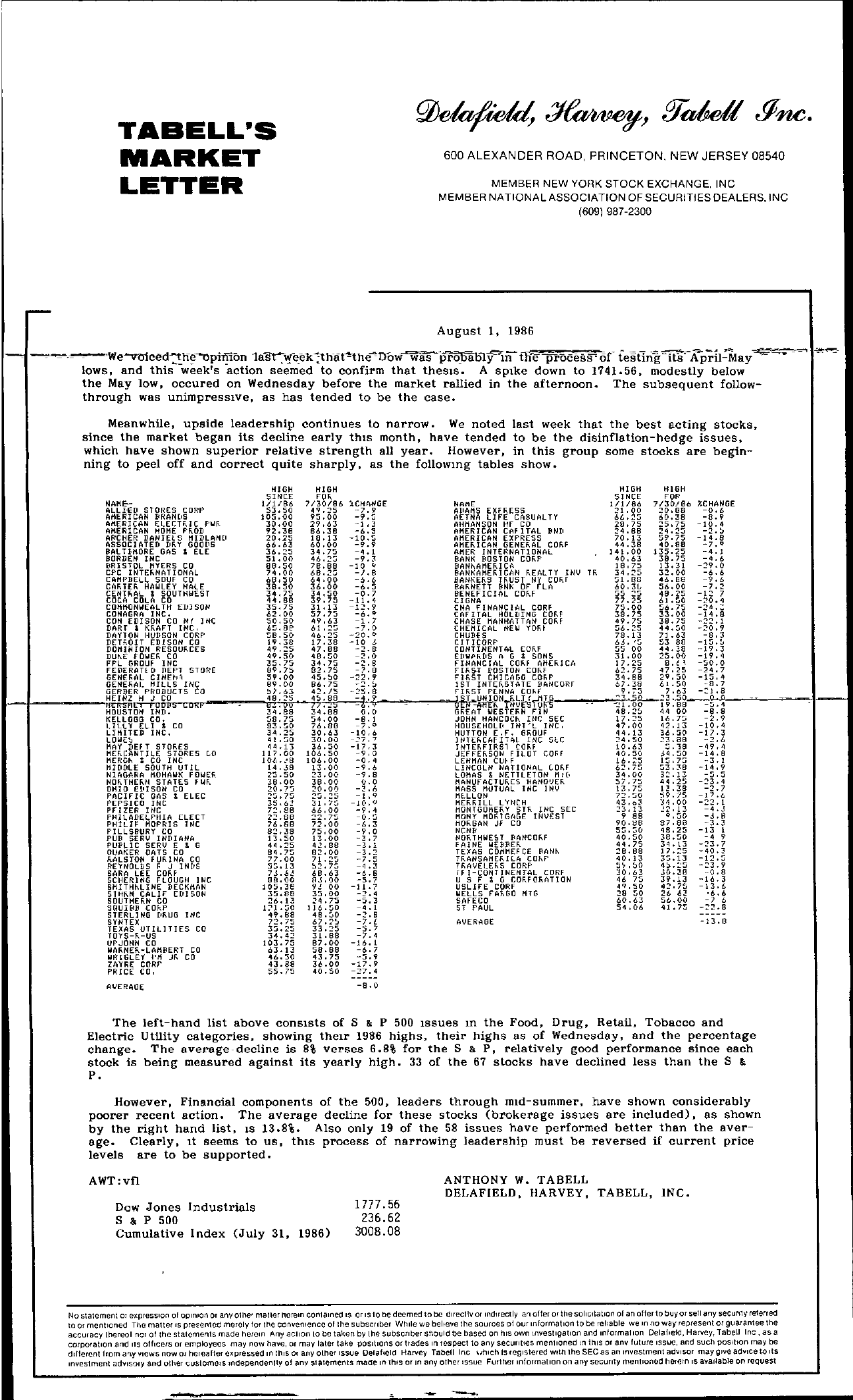 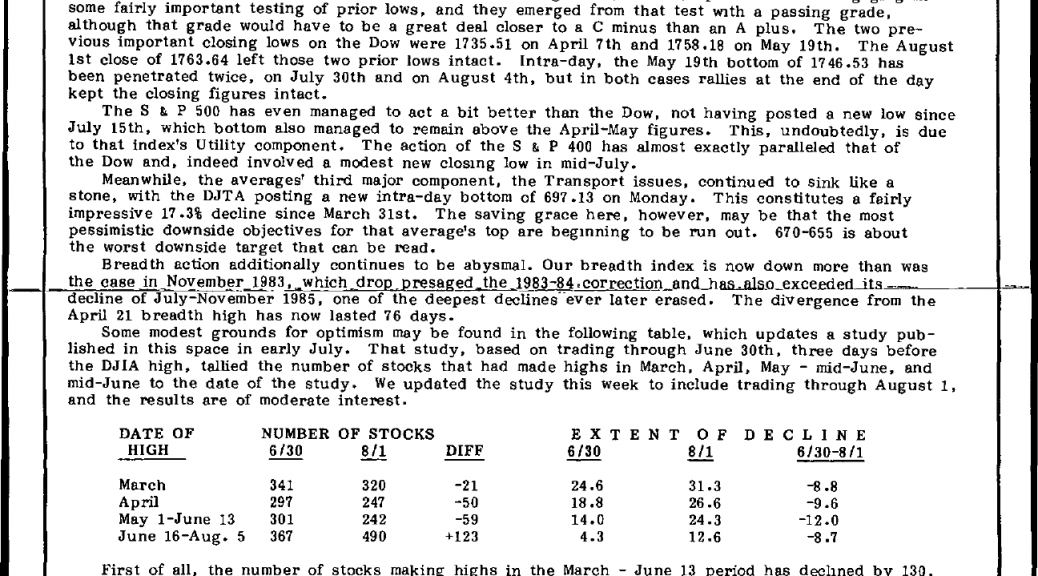 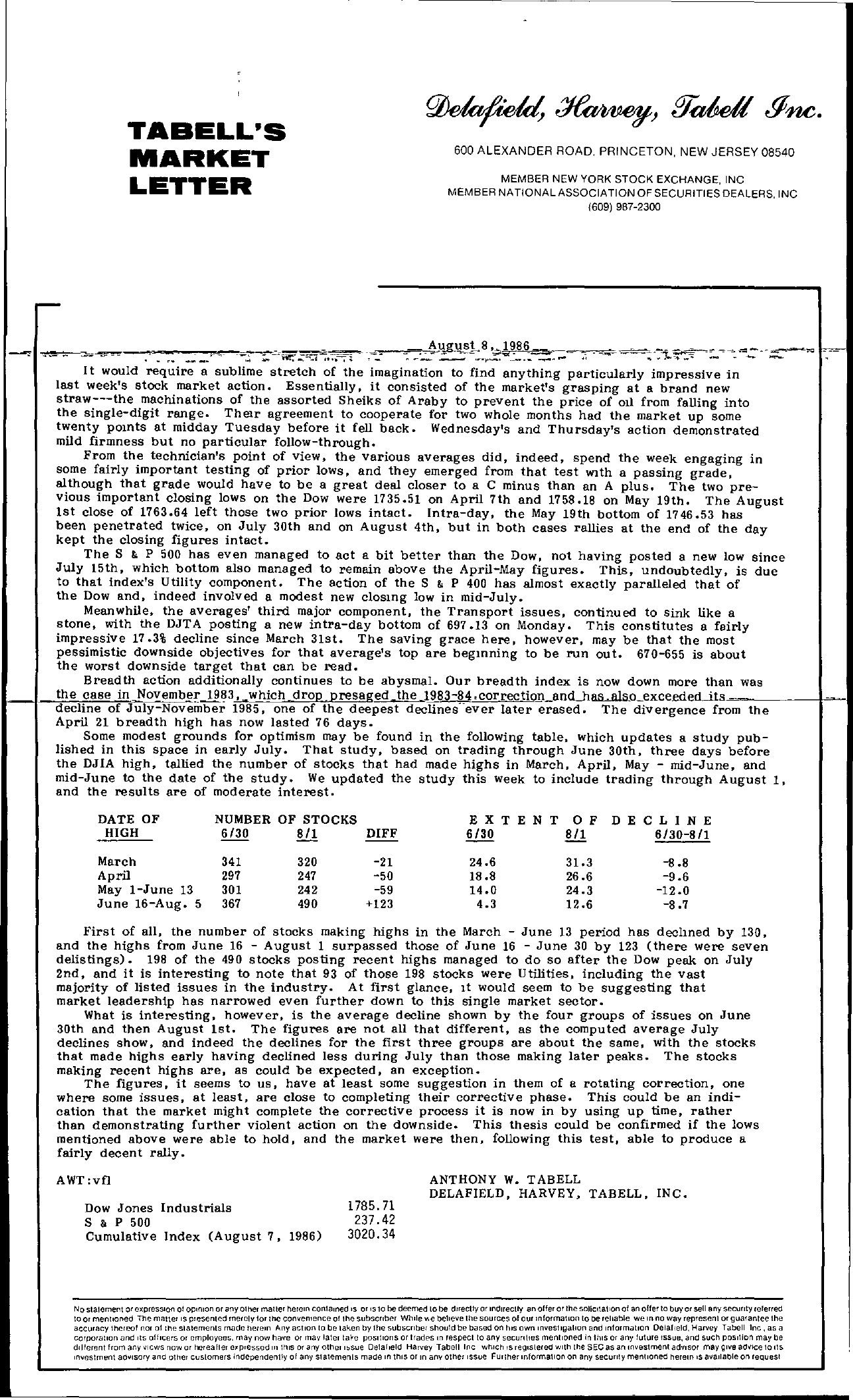 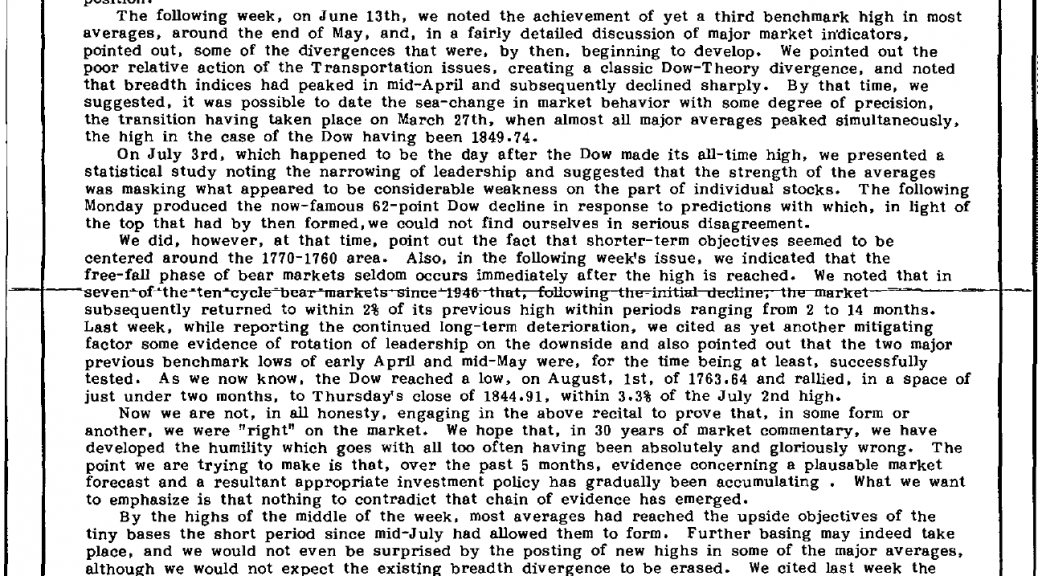 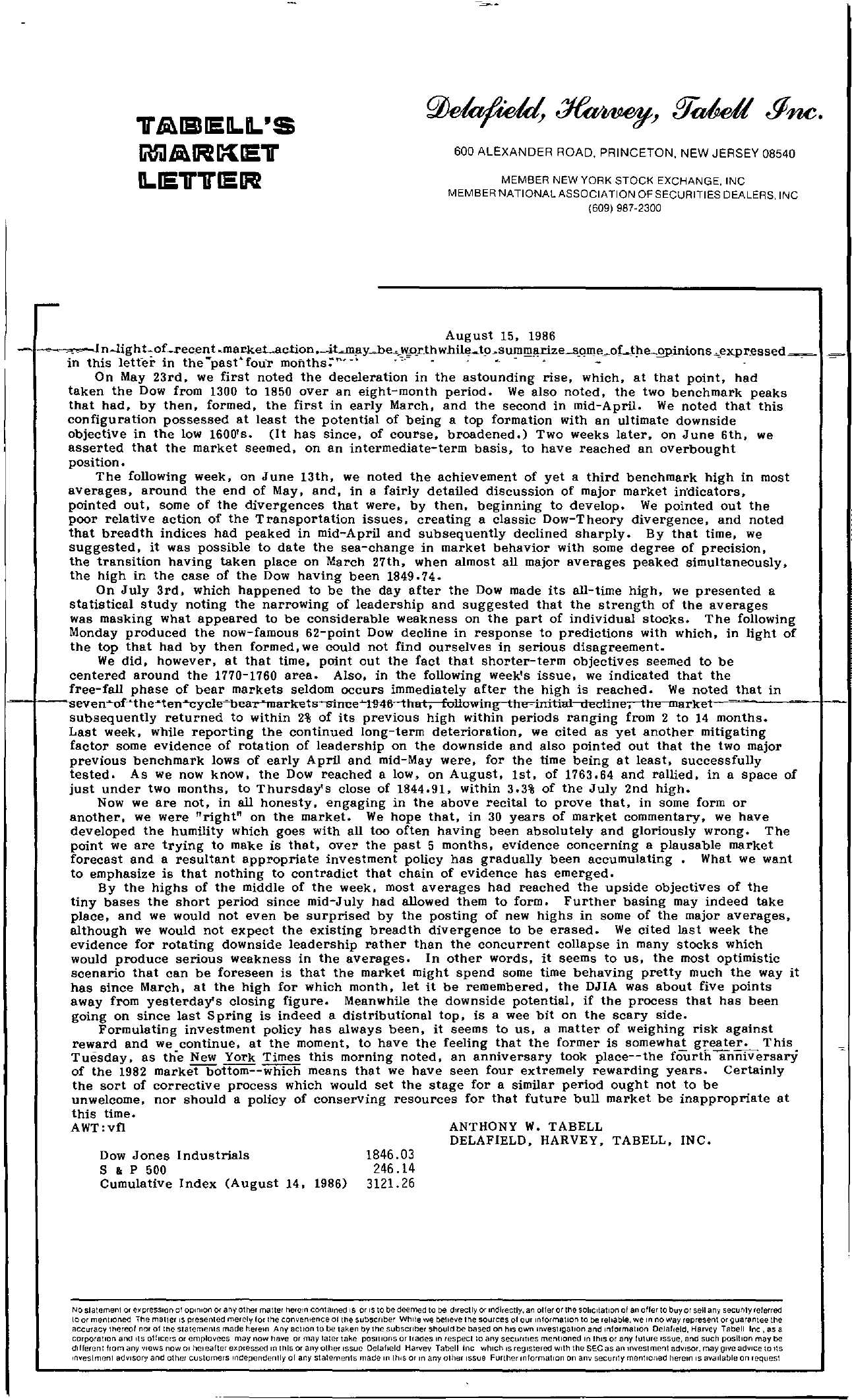 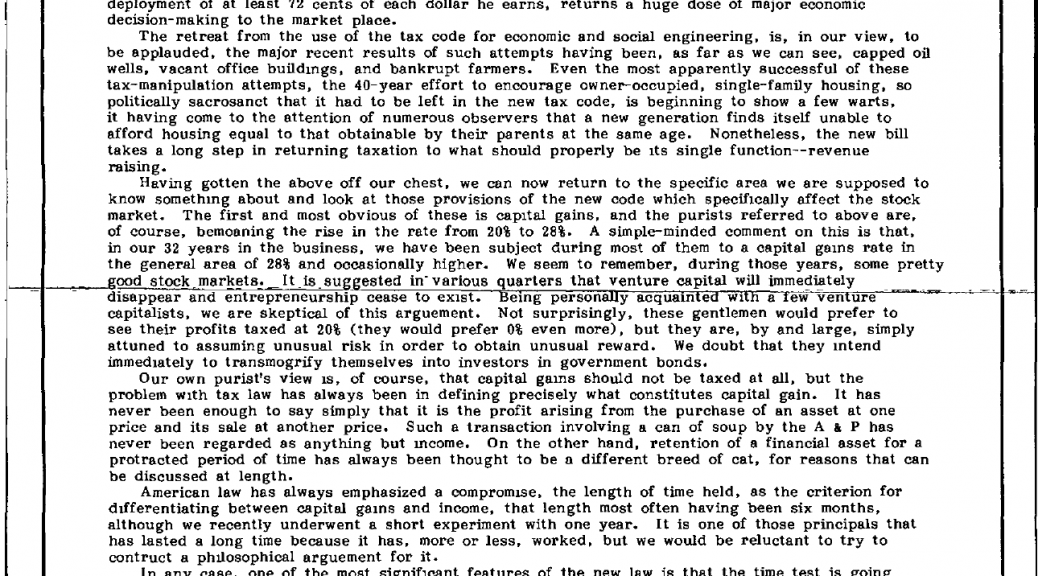 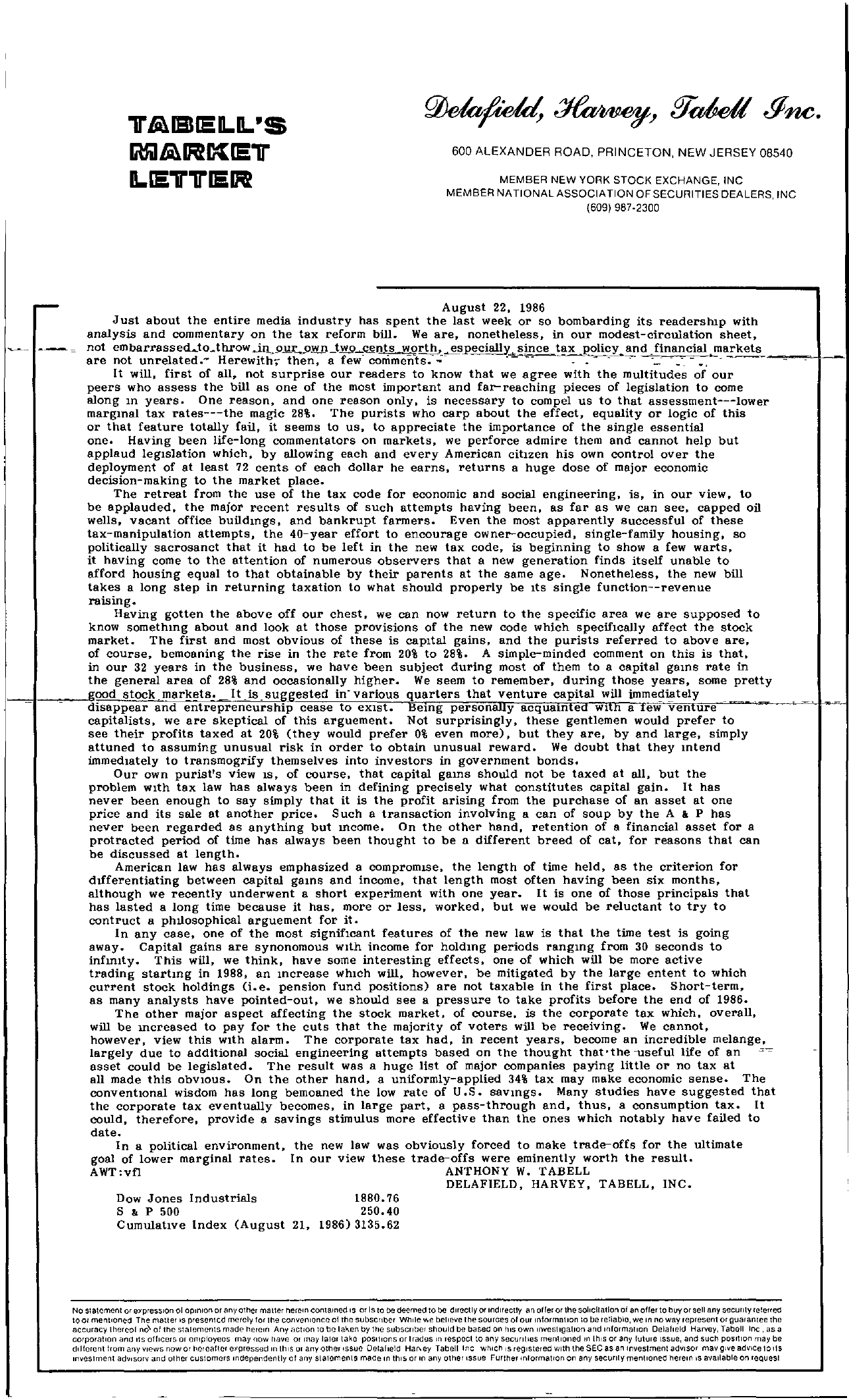 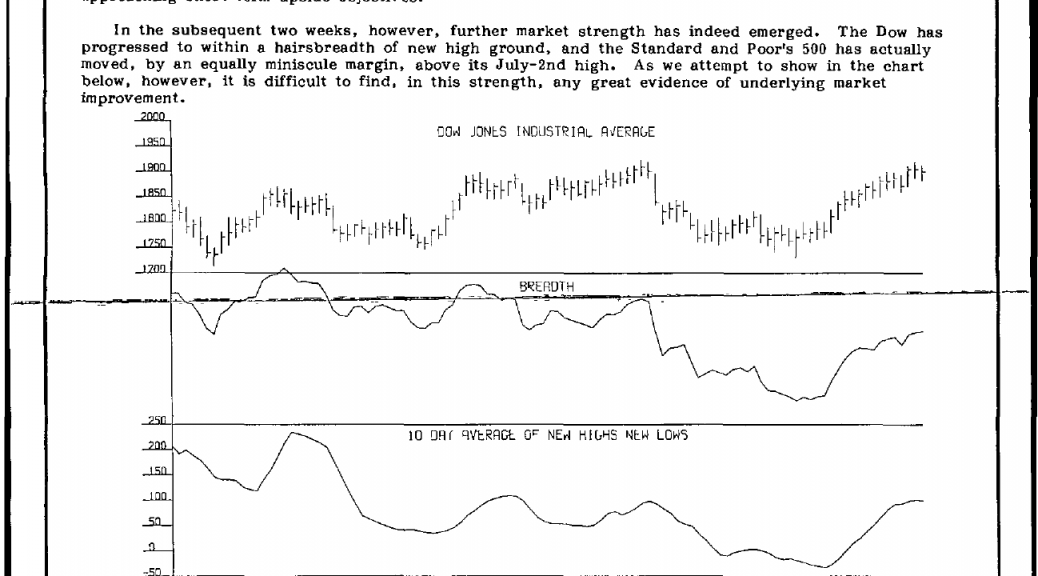 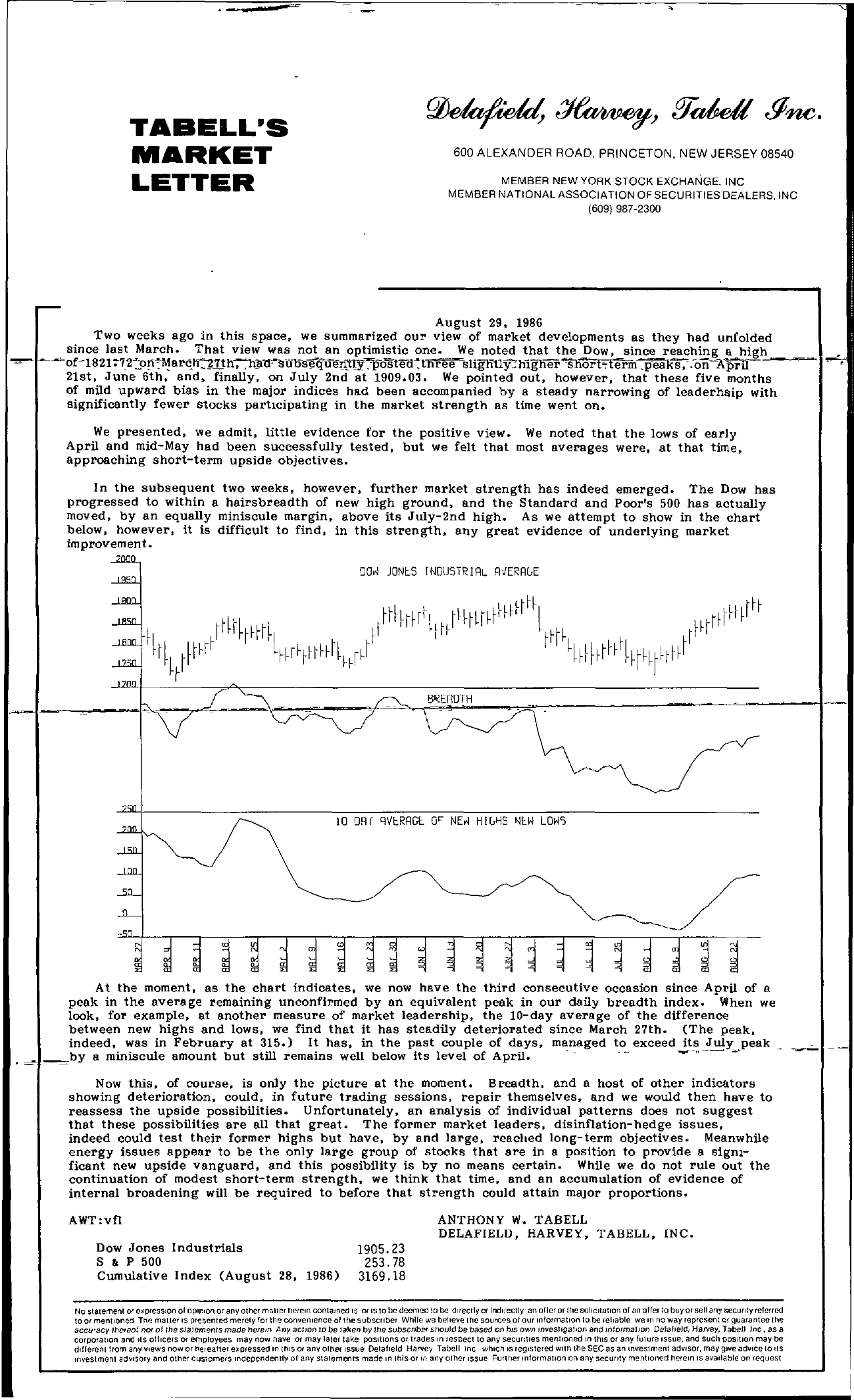 TABELL'S MARKET LETTER 600 ALEXANDER ROAD, PRINCETON, NEW JERSEY 08540 MEMBER NEW YORK STOCK EXCHANGE, INC MEMBER NATIONAL ASSOCIATION OF SECURITIES DEALERS, INC (609) 987-2300 August 29, 1986 Two weeks ago in this space, we summarized our view of market developments as they had unfolded since last March. That view was not an optimistic one. We noted that the Dow. since reaching a high of-1821 nonlI1arc.tr-7th–hll'!l'SiIDsequel1tTIipOstedt1iree sligfitl'y'liignerSnort, term ,peakS'7 oni\ priI — 21st, June 6th. and. finally. on July 2nd at 1909.03. We pointed out, however. that these five months of mild upward bias in the major indices had been accompanied by a steady narrowing of leaderhsip with Significantly fewer stocks partIcipating in the market strength as time went on. We presented, we admit, little evidence for the positive view. We noted that the lows of early April and mid-May had been successfully tested. but we felt that most averages were, at that time, approaching short-term upside objectives. In the subsequent two weeks, however. further market strength has indeed emerged. The Dow has progressed to within a hairsbreadth of new high ground, and the Standard and Poor's 500 has actually moved. by an equally miniscule margin, above its July-2nd high. As we attempt to show in the chart below, however, it is difficult to find, in this strength, any great evidence of underlying market improvement. 00 JONeS INDUSTRIRL RvERRGE f rtfrfrtf frtfftfrtlfrflffrLrffffrflffl flf rfrtlftftfrff 'rlfftr lffrfrrrffllfrrri flfffrtffrflfftftfft JEn At the moment, as the chart indicates, we now have the third consecutive occasion since April of a peak in the average remaining unconfirmed by an equivalent peak in our daily breadth index. When we look, for example, at another measure of market leadership, the 10-day average of the difference between new highs and lows. we find that it has steadily deteriorated since March 27th. (The peak. indeed, was in February at 315.) It has, in the past couple of days, -by a miniscule amount but still remains well below its level of April. managed . to exceed its July peak . – — — 'T – -.-…;;… — Now this, of course. is only the picture at the moment. Breadth. and a host of other indicators showing deterioration, could. in future trading sessions. repair themselves, and we would then have to reassess the upside possibilities. Unfortunately. an analysis of individual patterns does not suggest that these possibilities are all that great. The former market leaders. disinflation-hedge issues, indeed could test their former highs but have. by and large, reached long-term objectives. Meanwhile energy issues appear to be the only large group of stocks that are in a position to provide a SignIficant new upside vanguard, and this possibility is by no means certain. While we do not rule out the continuation of modest short-term strength. we think that time, and an accumulation of evidence of internal broadening will be required to before that strength could attain major proportions. AWTvfl Dow Jones Industrials 1905,23 S & P 500 253,78 Cumulative Index (August 28, 1986) 3169,18 ANTHONY W. TABELL DELAFIELD, HARVEY, TABELL, INC. No statement or expression 01 opinion or any other malter herem contamed IS or IS\O be deemed to be directly Of Indirectly an offeror the soliCitation of an offer to buy or sell any secufltyreferred toor mentioned lhfol matter IS presented merely for the convenlenceol the subscriber While we beheve Ihe sources of our information to be reliable we In no way represent or guaranteo Ihe accu'acy Ihclco! nOl 01 the sJaJOmenls made helem Any aClron 10 be lalolen by the SubSCflber should be based 011 hIS own mveshgallon and mlorma/ion DeJa/lelc!, HaIVey, label) Inc, as a corporation and Its ollicers or employees may now have or may Jatot lake POSitionS or trades In resPect to any secufltles menltoned In thiS or any future rssue, and such POSition may be dlfferenllrom any views now or hereafter expressed In thiS or any olher Issue Delafield Harvey labell Inc which IS registered With the SEC as an Investment adVisor, may give advice 10 liS Investment adVisory and other customers Independently of any staloments made In this or In any other Issue Further Information on any security mentioned herein IS available on request