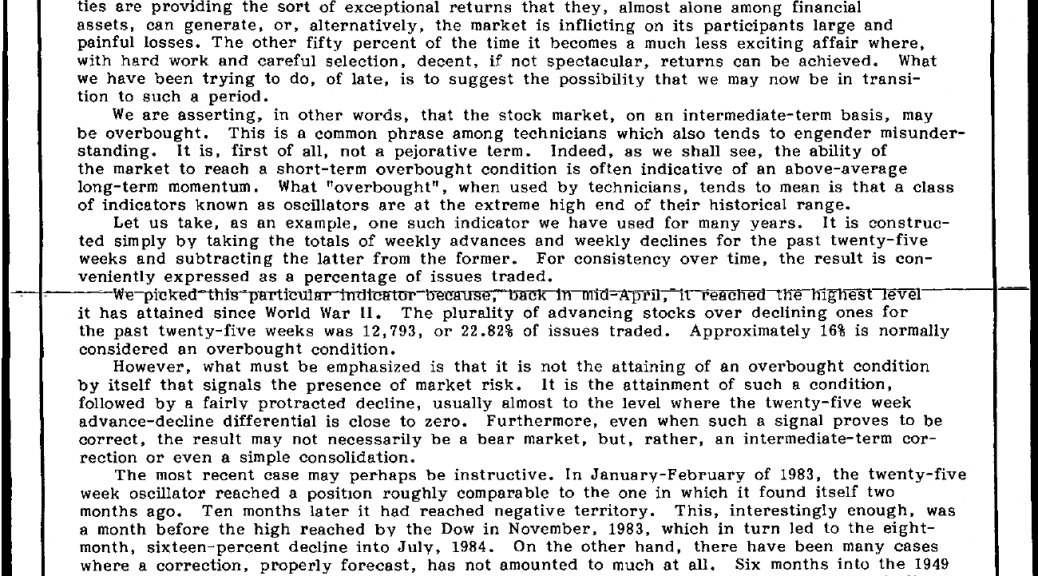 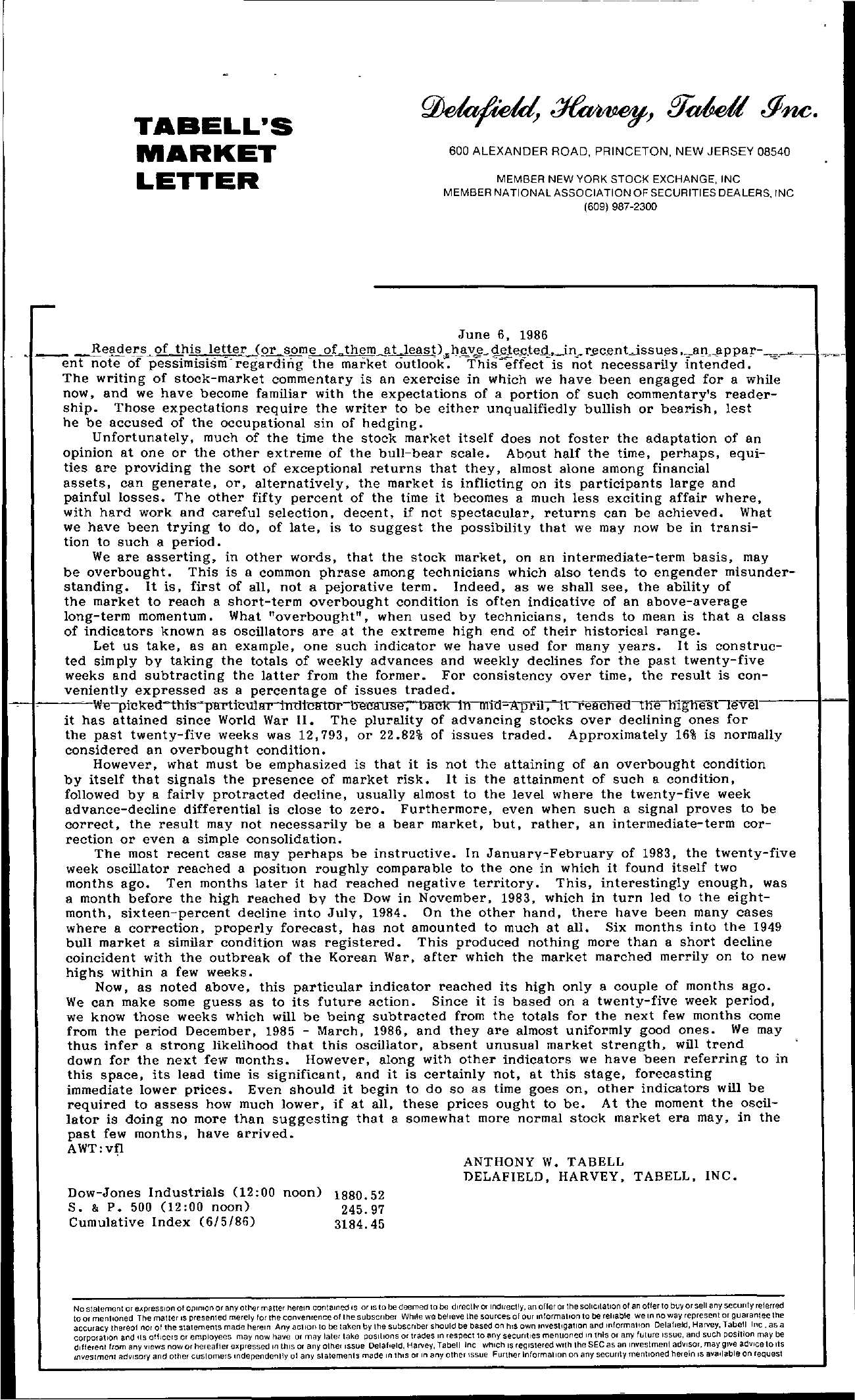 —— – — — — ————————————– TABELL-S MARKET LETTER 600 ALEXANDER ROAD, PRINCETON, NEW JERSEY 08540 MEMBER NEW YORK STOCK EXCHANGE, INC MEMBER NATIONAL ASSOCIATION OF SECURITIES DEALERS. INC (609) 9872300 June 6, 1986 eadersof this letter (9L-SOme of themat least)h!lvJ'(LeJec.tejt.Jn rcenLissues,al1o–1lppar-,,I. , ent note of pessimisisni regarding the market outlook' Thiseffect -is not necessarily intended. The writing of stock-market commentary is an exercise in which we have been engaged for a while now t and we have become familiar with the expectations of a portion of such commentary's readership. Those expectations require the writer to be either unqualifiedly bullish or bearish, lest he be accused of the occupational sin of hedging. Unfortunately, much of the time the stock market itself does not foster the adaptation of an opinion at one or the other extreme of the bull-bear scale. About half the time, perhaps, equities are providing the sort of exceptional returns that they, almost alone among financial assets, can generate, or, alternatively, the market is inflicting on its participants large and painful losses. The other fifty percent of the time it becomes a much less exciting affair where, with hard work and careful selection, decent, if not spectacular, returns can be achieved. What we have been trying to do, of late, is to suggest the possibility that we may now be in transition to such a period. We are asserting, in other words, that the stock market, on an intermediate-term basis, may be overbought. This is a common phrase among technicians which also tends to engender misunderstanding. It is, first of all, not a pejorative term. Indeed, as we shall see, the ability of the market to reach a short-term overbought condition is often indicative of an above-average long-term momentum. What overbought, when used by technicians, tends to mean is that a class of indicators known as oscillators are at the extreme high end of their historical range. Let us take, as an example, one such indicator we have used for many years. It is constructed simply by taking the totals of weekly advances and weekly declines for the past twenty-five weeks and subtracting the latter from the former. For consistency over time, the result is conveniently expressed as a percentage of issues traded .. I;'u ',,0 … UO' u,, ' ….., H lneo level it has attained since World War II. The plurality of advancing stocks over declImng ones for the past twenty-five weeks was 12,793, or 22.82 of issues traded. Approximately 16 is normally considered an overbought condition. However, what must be emphasized is that it is not the attaining of an overbought condition by itself that signals the presence of market risk. It is the attainment of such a condition, followed by a fairly protracted decline, usually almost to the level where the twenty-five week advance-decline differential is close to zero. Furthermore, even when such a signal proves to be correct, the result may not necessarily be a bear market, but, rather, an intermediate-term cor- rection or even a simple consolidation. The most recent case may perhaps be instructive. In January-February of 1983, the twenty-five week oscillator reached a positIOn roughly comparable to the one in which it found itself two months ago. Ten months later it had reached negative territory. This, interestingly enough, was a month before the high reached by the Dow in November, 1983, which in turn led to the eightmonth, sixteen-percent decline into July, 1984. On the other hand, there have been many cases where a correction, properly forecast, has not amounted to much at all. Six months into the 1949 bull market a similar condition was registered. This produced nothing more than a short decline coincident with the outbreak of the Korean War, after which the market marched merrily on to new highs within a few weeks. Now, as noted above, this particular indicator reached its high only a couple of months ago. We can make some guess as to its future action. Since it is based on a twenty-five week period, we know those weeks which will be being subtracted from the totals for the next few months come from the period December, 1985 – March, 1986, and they are almost uniformly good ones. We may thus infer a strong likelihood that this oscillator, absent unusual market strength, will trend down for the next few months. However, along with other indicators we have been referring to in this space, its lead time is significant, and it is certainly not, at this stage, forecasting immediate lower prices. Even should it begin to do so as time goes on, other indicators will be required to assess how much lower, if at all, these prices ought to be. At the moment the oscillator is doing no more than suggesting that a somewhat more normal stock market era may, in the past few months, have arrived 6 AWTv\1 ANTHONY W. TAB ELL DELAFIELD, HARVEY, TABELL, INC. Dow-Jones Industrials (1200 noon) 1880.52 S. & P. 500 (1200 noon) 245.97 Cumulative Index (6/5/86) 3184.45 NO statemcnt or epresslOn of opl11l0n or any other maner herein contained IS or IS to be deemed to be dlrectlv or Indirectly, an offer or the soliCitation of an offer to buy or sell any secullty referred toor mentioned The mailer IS presented merely fOI the convemence of the subSCliber While we believe Ihe sources of our Iflformatlon to be reliable we In noway represent or guarantee the accuracy thereat nOI 01 the statements made herem Any action to be taken by the subSCliber should be based on hiS own mvestlgatlon and II1tormatlon Delafield, Harvey, Tabelt Inc, asa corporation and liS oHlcers or employees may now have or may later take pOSlllons or trades Ifl respect to any seculltles mentioned m this or any future Issue, and such poSition may be different from any views now or heleafter expressed In thiS or any other Issue Delafield, Harvey, Tabell Inc which IS registered With the SEC as an Investment adVisor, may give adVice to liS II1vestmenl adVISOry and other customllrs mdependen\!y 01 any statements mode m thiS or In any other Issue Further Information on any security mentioned herein IS available on request 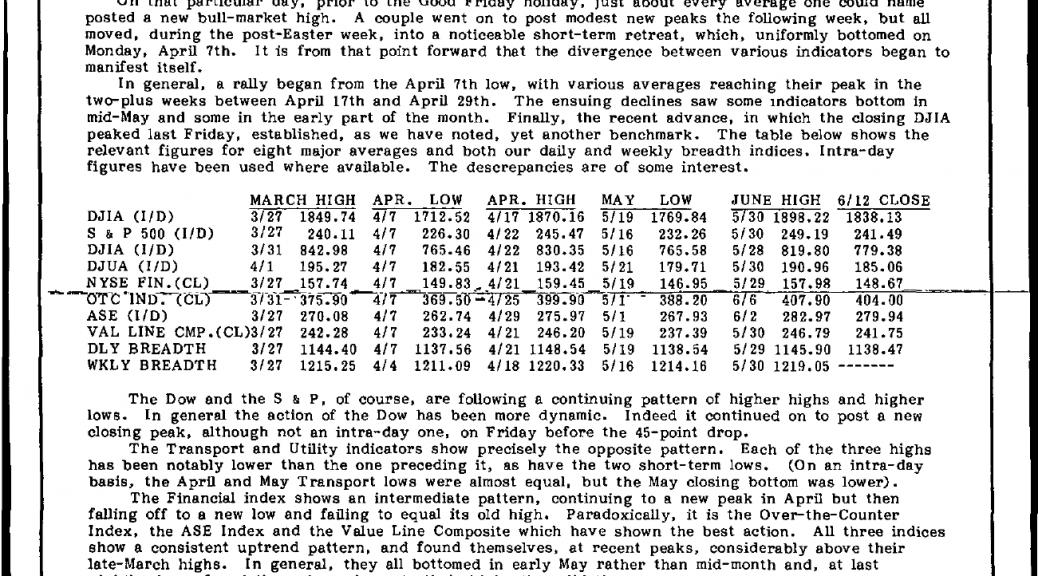 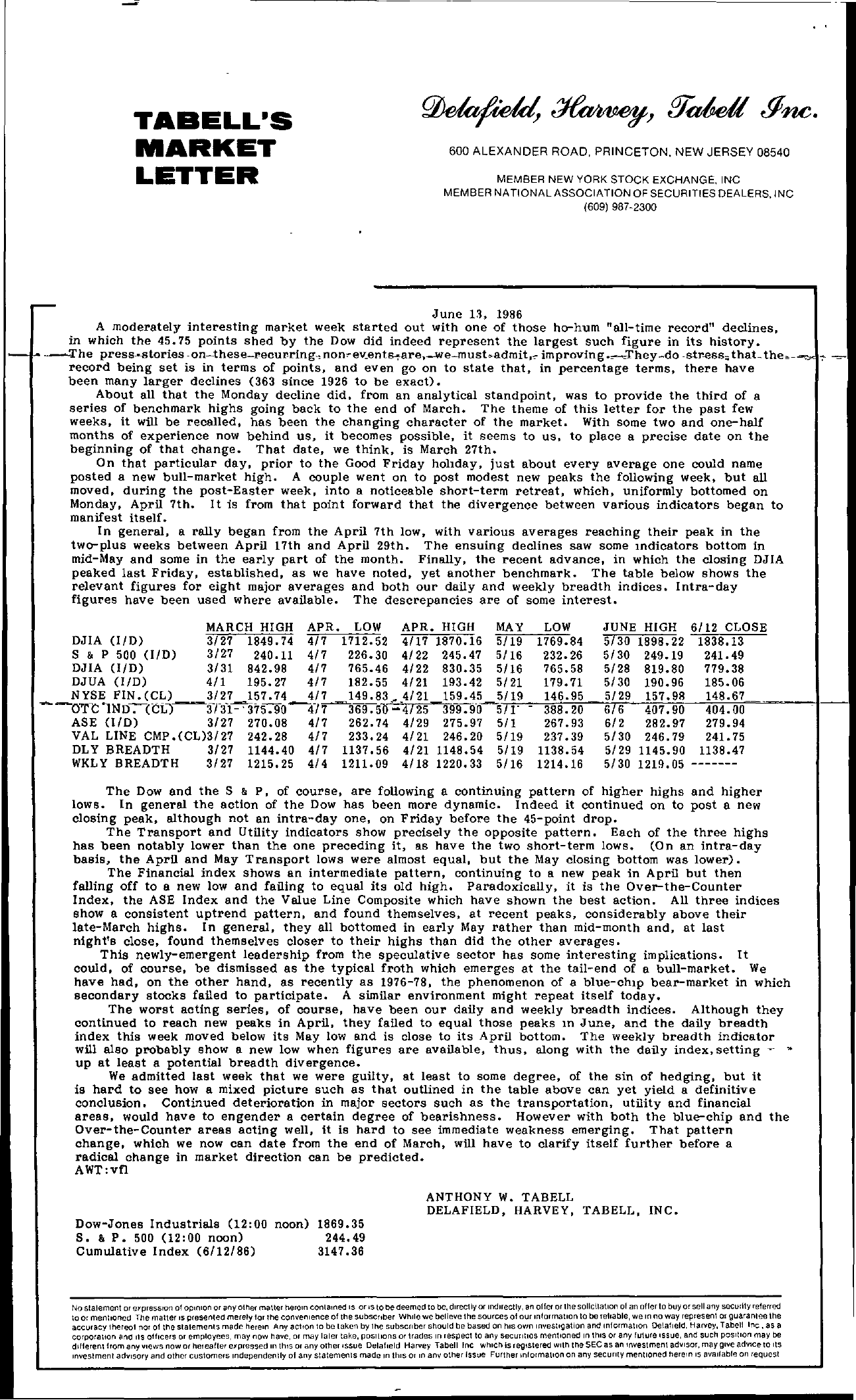 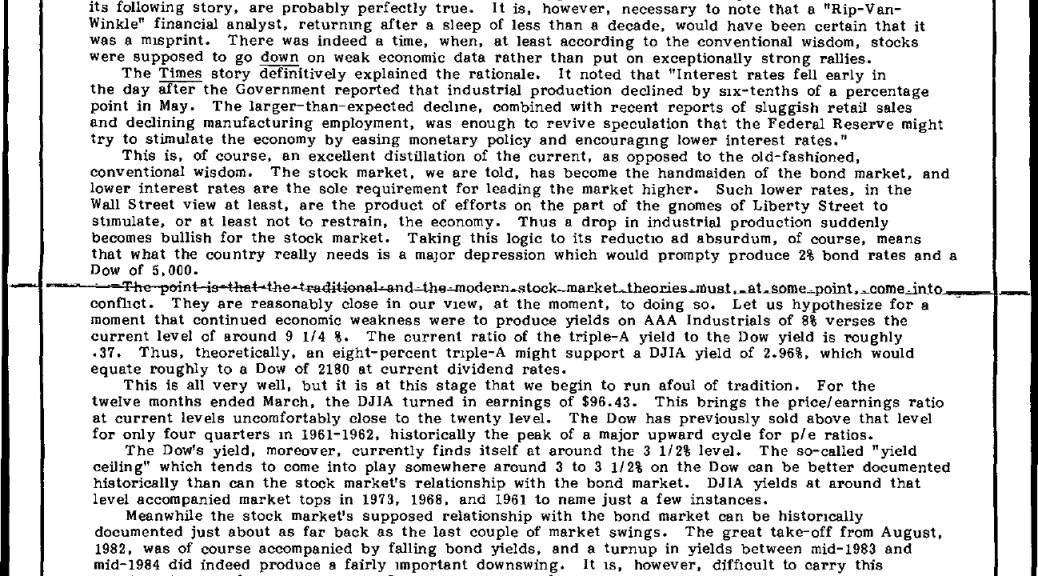 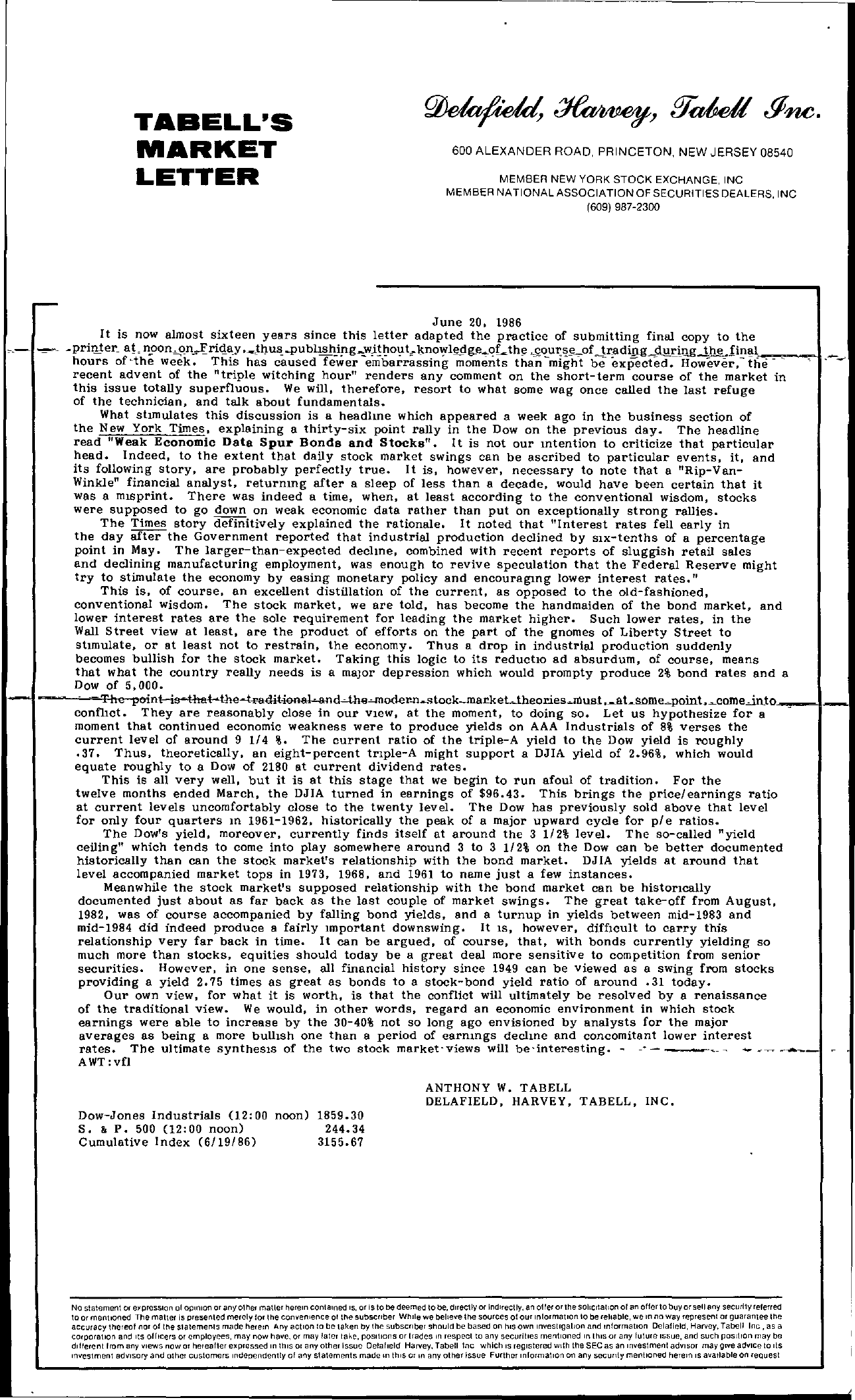 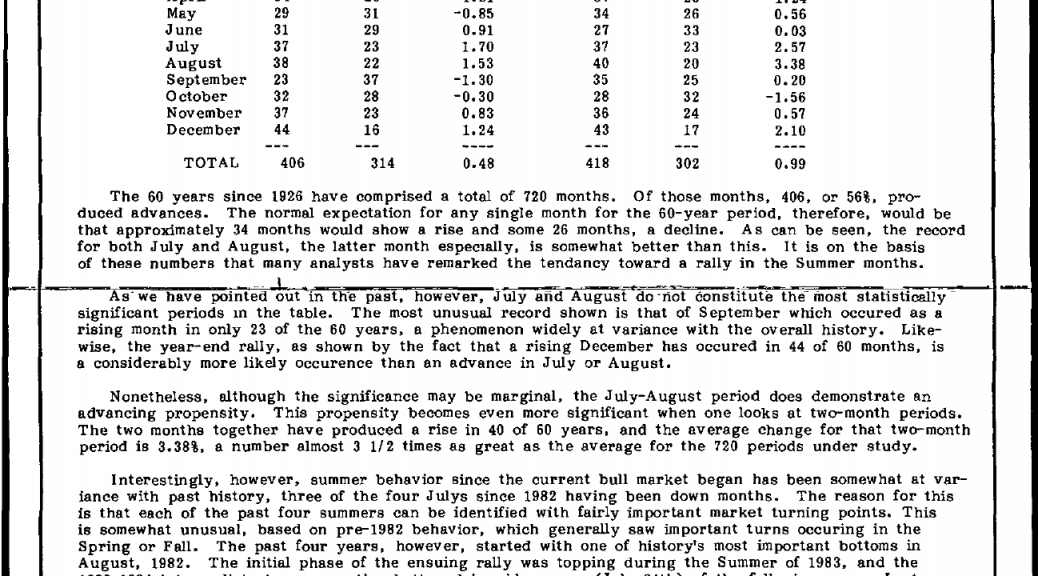 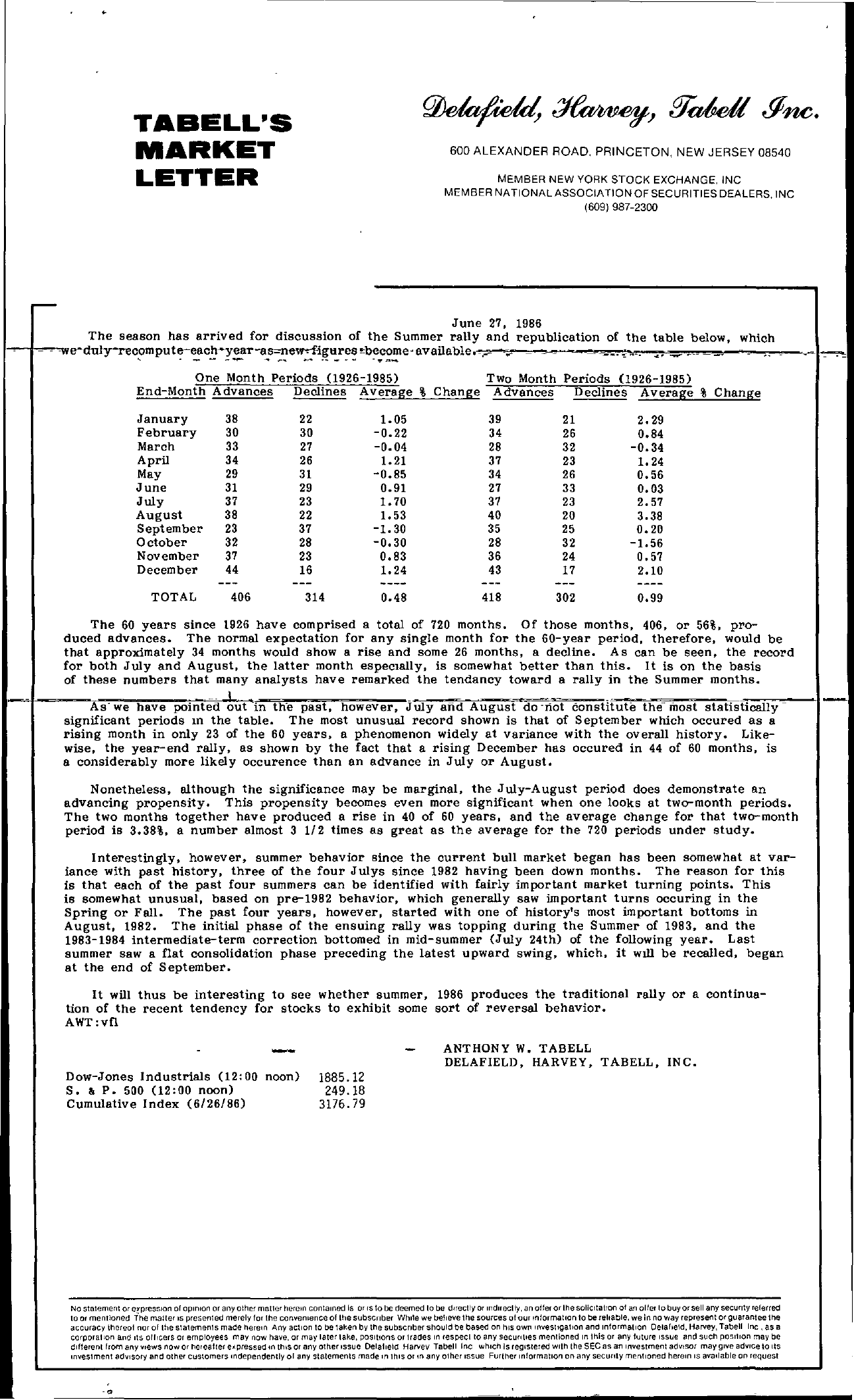 —————————————————————————————— TABELL'S MARKET LETTER 600 ALEXANDER ROAD. PRINCETON, NEW JERSEY 08540 MEMBER NEW YORK STOCK EXCHANGE. INC MEMBER NATIONAL ASSOCIATION OF SECURITIES OEALERS. INC (609) 987-2300 June 27, 1986 The season has arrived for discussion of the Summer rally and republication of the table below. – -.,..duly-rec.mpute-''c!yr-8sneWfigtlres – . ' b e-c….o….m… e a v ail a b l e . -. …..- – which One Month Periods (1926-1985) Two Month Periods (1926-1985) End-Month Advances Declines Average Change Advances Declines Average Change January 38 22 1.05 February 30 30 -0.22 March 33 27 -0.04 April 34 26 1.21 May 29 31 -0.85 June 31 29 0.91 July 37 23 1.70 August 38 22 1.53 September 23 37 -1.30 October 32 28 -0.30 November 37 23 0.83 December 44 16 1.24 39 21 2.29 34 26 0.84 28 32 -0.34 37 23 1. 24 34 26 0.56 27 33 0.03 37 23 2.57 40 20 3.38 35 25 0.20 28 32 -1.56 36 24 0.57 43 17 2.10 TOTAL 406 314 0.48 418 302 0.99 The 60 years since 1926 have comprised a total of 720 months. Of those months. 406. or 56. produced advances. The normal expectation for any single month for the GO-year period, therefore, would be that approximately 34 months would show a rise and some 26 months. a decline. As can be seen, the record for both July and August, the latter month especIally, is somewhat better than this. It is on the basis of these numbers that many analysts have remarked the tendancy toward a rally in the Summer months. s we have pointed out in the past, however. July and August do not constitute the- most statisticallysignificant periods In the table. The most unusual record shown is that of September which occured as a rising month in only 23 of the 60 years, a phenomenon widely at variance with the overall history. Likewise, the year-end rally, as shown by the fact that a rising December has occured in 44 of 60 months. is a considerably more likely occurence than an advance in July or August. Nonetheless, although the significance may be marginal. the July-August period does demonstrate an advancing propensity. This propensity becomes even more significant when one looks at two-month periods. The two months together have produced a rise in 40 of 60 years, and the average change for that two-month period is 3.38. a number almost 3 112 times as great as the average for the 720 periods under study. Interestingly, however, summer behavior since the current bull market began has been somewhat at variance with past history. three of the four Julys since 1982 having been down months. The reason for this is that each of the past four summers can be identified with fairly important market turning points. This is somewhat unusual, based on pre-1982 behavior, which generally saw important turns occuring in the Spring or Fall. The past four years, however, started with one of history's most important bottoms in August. 1982. The initial phase of the ensuing rally was topping during the Summer of 1983. and the 1983-1984 intermediate-term correction bottomed in mid-summer (July 24th) of the following year. Last summer saw a flat consolidation phase preceding the latest upward swing. which. it will be recalled, began at the end of September. It will thus be interesting to see whether summer, 1986 produces the traditional rally or a continua- tion of the recent tendency for stocks to exhibit some sort of reversal behavior. AWTvfi – ANTHONY W. TABELL DELAFIELD. HARVEY. TABELL. INC. Dow-Jones Industrials (12 00 noon) 1885.12 S. & P. 500 (1200 noon) 249.18 Cumulative Index (6/26/86) 3176.79 –,.., NO statement or epresslon Of OpiniOn or any other mailer herem contamed Is or IS 10 be deemed 10 be directly or mdllectly, an oller or Ihe soliCitation of an offer 10 buy or sell any secunty referred to or mentloned The malter IS presented merely for the convemence of the subscriber White we believe the sources of our information to be rehable, we in no way represent or guarantee the accuracy thereof nor of the statements made herem Any action to be taken by the subSCflbershould be based on hiS own invesllgatlon and information Oelafleld, Harvey, labell Inc, as a corporafion and ItS officers or employees may now have, or may later take, POSitions or !fadeS In respecl to any socunlles mentioned In fhls or any future Issue and such position may be dlfterent from any views now or hcrcalter e..pressed in thIS or any otherlssuc Delafield Harvev label! Inc which Is registered With the SEC as an Invesfmenl adVisor may give advice to ItS Invesfment adVISory and other customers Independently of any statements made In lhls or In any olher Issue Further information on any security mentioned herein IS available on request 0