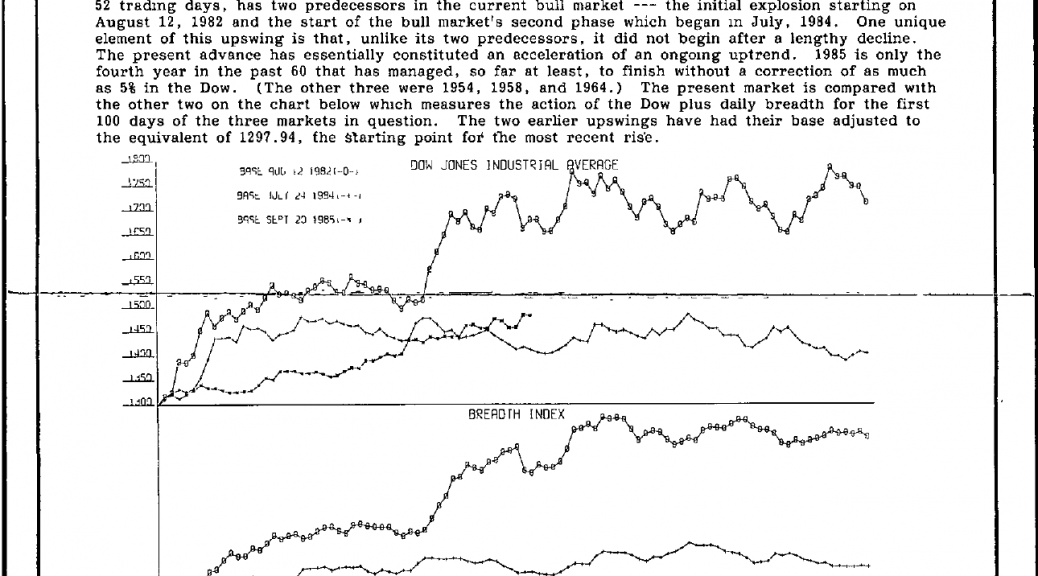 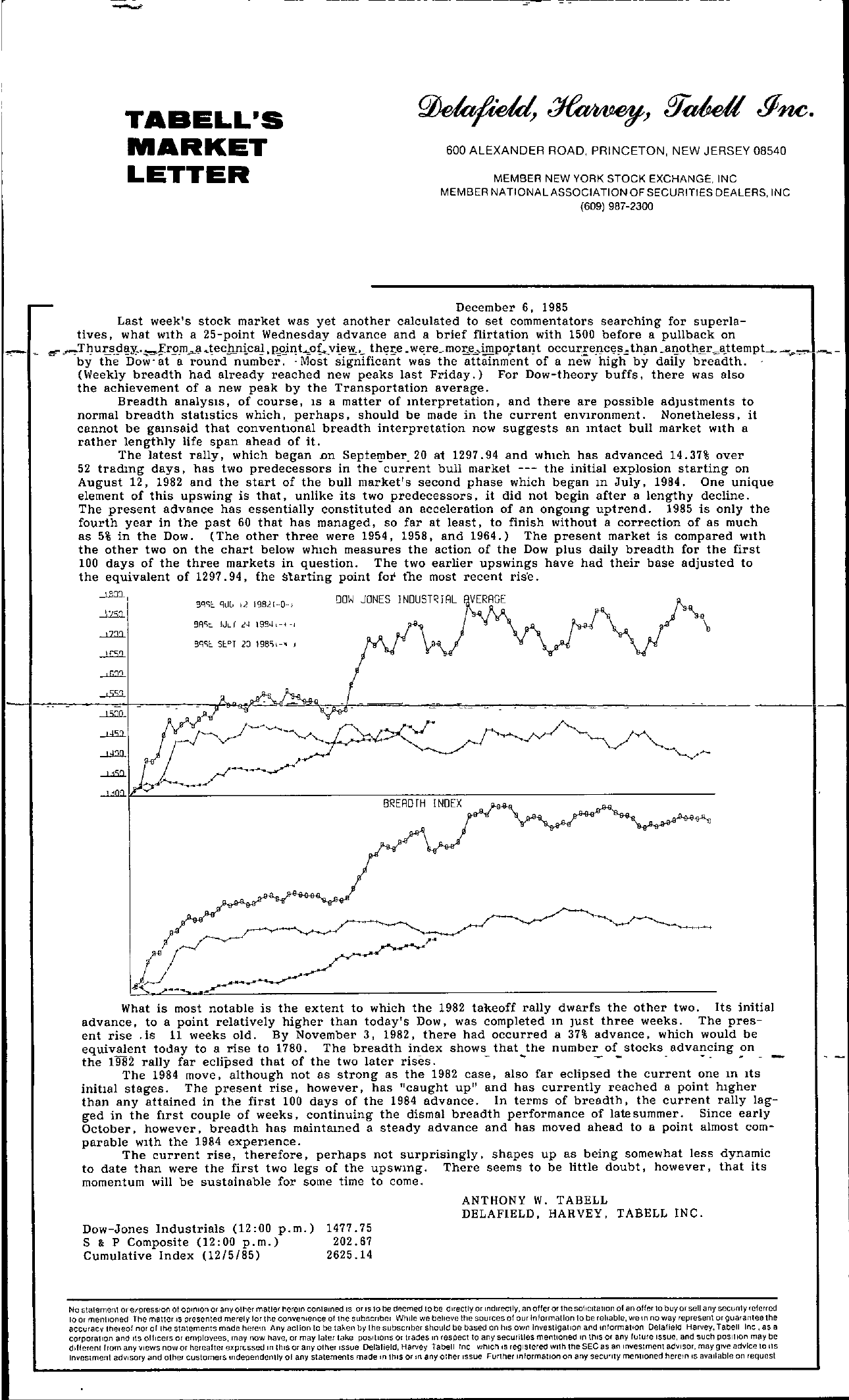 — – – – – – – – – – – – – TABELL'S MARKET LETTER 600 ALEXANDER ROAD, PRINCETON, NEW JERSEY 08540 MEMBER NEW YORK STOCK EXCHANGE, INC MEMBER NATIONAL ASSOCIATION OF SECURITIES DEALERS, INC (609) 987-2300 December 6, 1985 Last week's stock market was yet another calculated to set commentators searching for superla- tives. what wIth a 25-point Wednesday advance and a brief flirtation with 1500 before a pullback on — – byThursda;y..Erom-,,–1J. . . tecJ the Dow– at -& -round- tnical. goi number nt….of..- view.. ther.e Mosf significant were morejffiportant occurl'ences wa-s the attainment .of a new high- tbhyandaailnyo-thberreastdtetmh.p,L…. . (\veekly breadth had already reached new peaks last Friday.) For Dow-theory buffs, there was also the achievement of a new peak by the Transportation average. Breadth analysIs, of course, IS a matter of mterpretation, and there are possible adjustments to normal breadth statIstics which, perhaps, should be made in the current envIronment. Nonetheless, it cannot be gaInsaid that conventIonal breadth interpretation now suggests an mtact bull market wIth a rather lengthly life span ahead of it. The latest rally, which began Dn Sepiel.!lber. 20 at 1297.94 and WhICh has advanced 14.37 Oller 52 tradmg days, has two predecessors in the current bull market — the initial explosion starting on August 12, 1982 and the start of the bull market's second phase which began m July, 1984, One unique element of this upswing is that, unlike its two predecessors, it did not begin after a lengthy decline. The present advance has essentially constituted an acceleration of an ongomg uptrend. 1985 is only the fourth year in the past 60 that has managed, so far at least, to finish without a correction of as much as 5 in the Dow. (The other three were 1954, 1958, and 1964.) The present market is compared wIth the other two on the chart below WhICh measures the action of the Dow plus daily breadth for the first 100 days of the three markets in question. The two earlier upswings have had their base adjusted to the equivalent of 1297.94, the tarting point fot tbe most recent ris'e. 9QSl '1iJ, 12 1982(-0-) DOW JONES lNOUSTIRL What is most notable is the extent to which the 1982 takeoff rally dwarfs the other two. Its initial advance, to a point relatively higher than today's Dow, was completed In Just three weeks. The pres- ent rise ,is 11 weeks old. By November 3, 1982, there had occurred a 37 advance, which would be equivalent today to a rise to 1780. The breadth index shows that the number of stocks advancing on the 1982 rally far eclipsed that of the two later rises. -… – – .. The 1984 move, although not as strong as the 1982 case, also far eclipsed the current one In Its initlal stages. The present rise, however, has caught up and has currently reached a point hIgher than any attained in the first 100 days of the 1984 advance. In terms of breadth, the current rally lag- ged in the fIrst couple of weeks, continuing the dismal breadth performance of late summer. Since early October, however, breadth has maintamed a steady advance and has moved ahead to a point almost com- parable WIth the 1984 experIence. The current rise, therefore, perhaps not surprisingly, shapes up as being somewhat less dynamic to date than were the first two legs of the upswmg. There seems to be little doubt, however, that its momentum will be sustainable for some time to come. Dow-Jones Industrials (12 00 p. m,) 1477.75 S & P Composite (12 00 p.m.) 202,67 Cumulative Index (12/5/85) 2625.14 ANTHONY IV, TABELL DELAFIELD, HARVEY, TABELL INC, No statement or e/presslon 01 opinion or any other matter herern contarned IS or IS to be deemed to be directly or indirectly, an offer or the sollcltallon of an offer to buyor sell any secunty referred 10 or mentIoned The matter IS presented merely lor the convenience of the subscriber While we believe the sources of Our Informal Ion 10 be reliable, weln no way represent or guarantee the accuracy thereol nor allhe statements made herein Any acllon 10 be tallen by the SuDsconer Should be based on hiS own Investigation and mformallon Delafield Harvey, Tabell Inc, as a corpora\lon and Its ollicers or employees, may now have, or may later take P051tlons or trades m resect to any securities mentioned In thiS or any future Issue, and such pOSition may be different Irom any views now or heleafter expa;ssed m thiS or any other Issue Delafield, Harvey labell Inc whIch IS registered With theSECas an mvestment adVisor, mayg!ve adylce to Its InveStment advISOry and other customers mdependently of any statements made In thiS or m any other Issue Further InformatIon on any secu'lty mentioned herem IS avaIlable on request 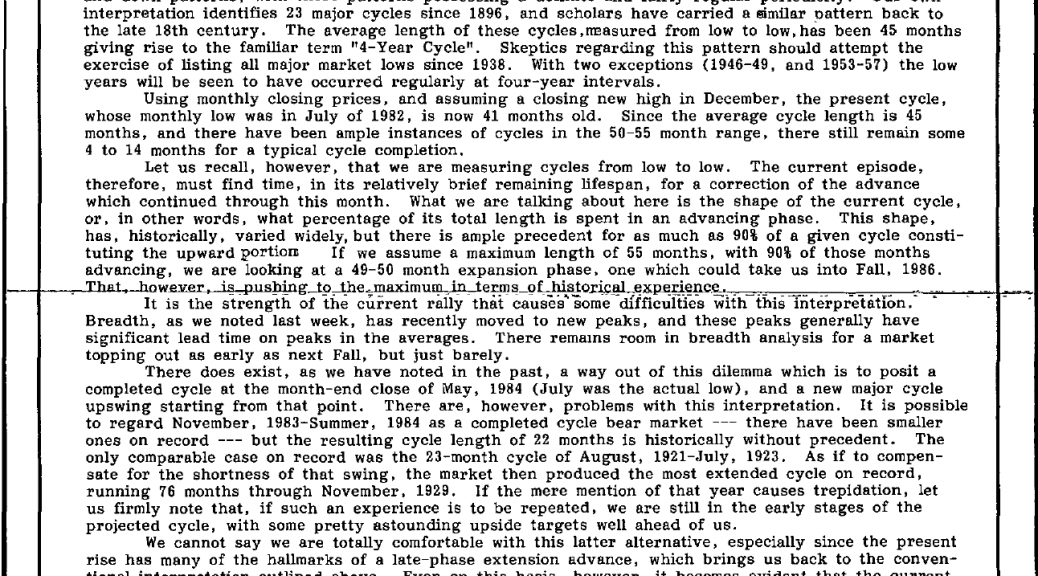 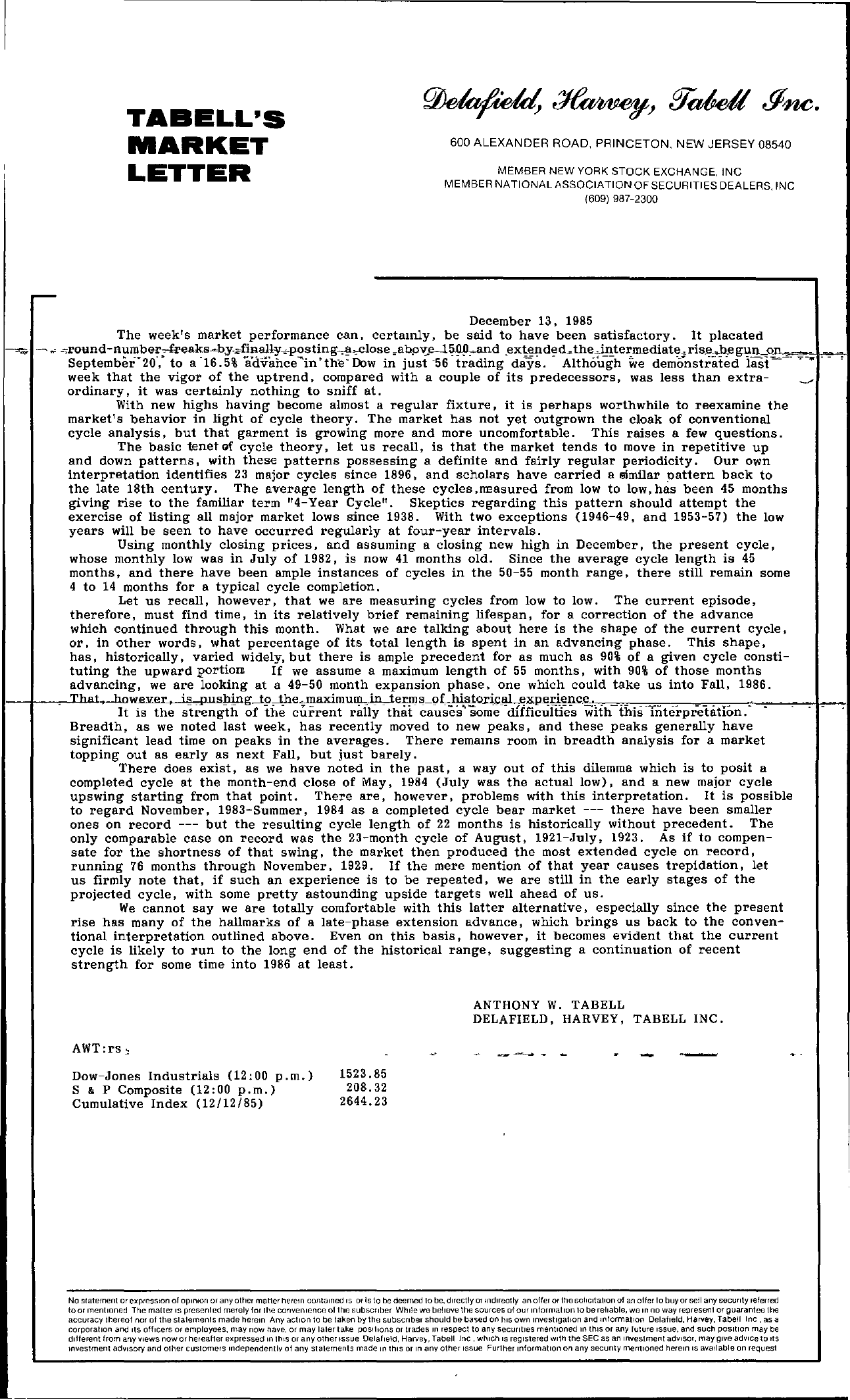 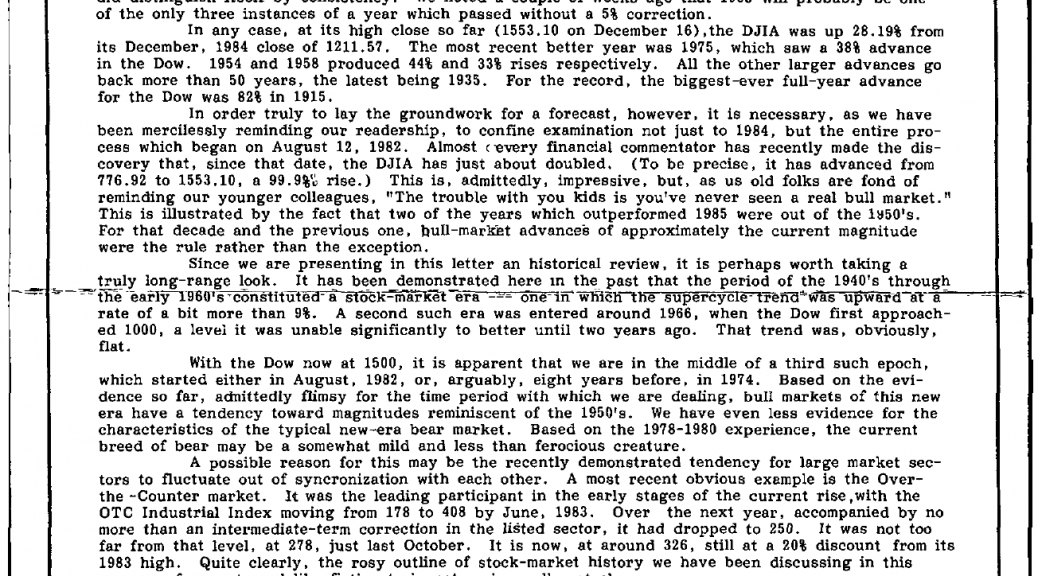 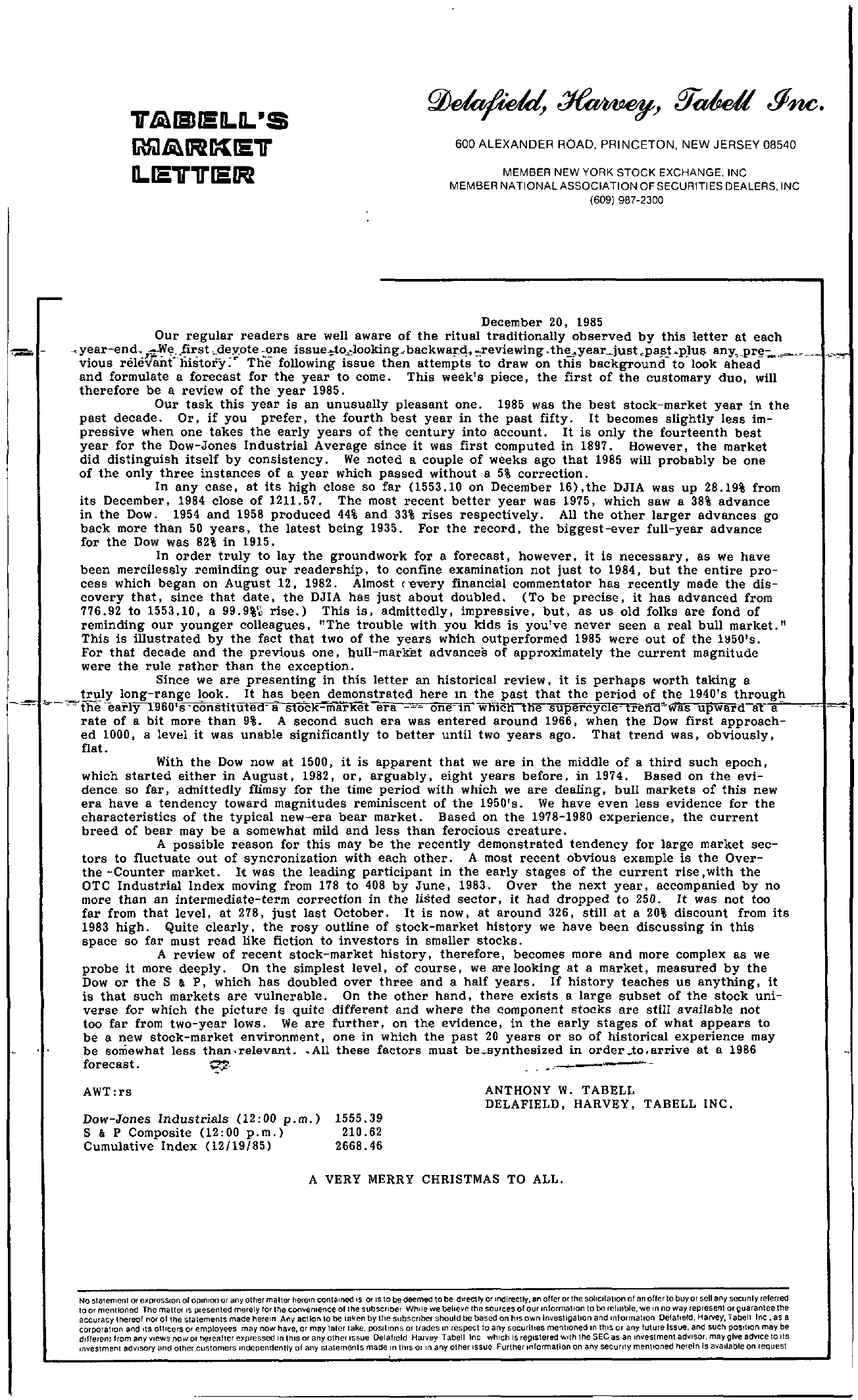 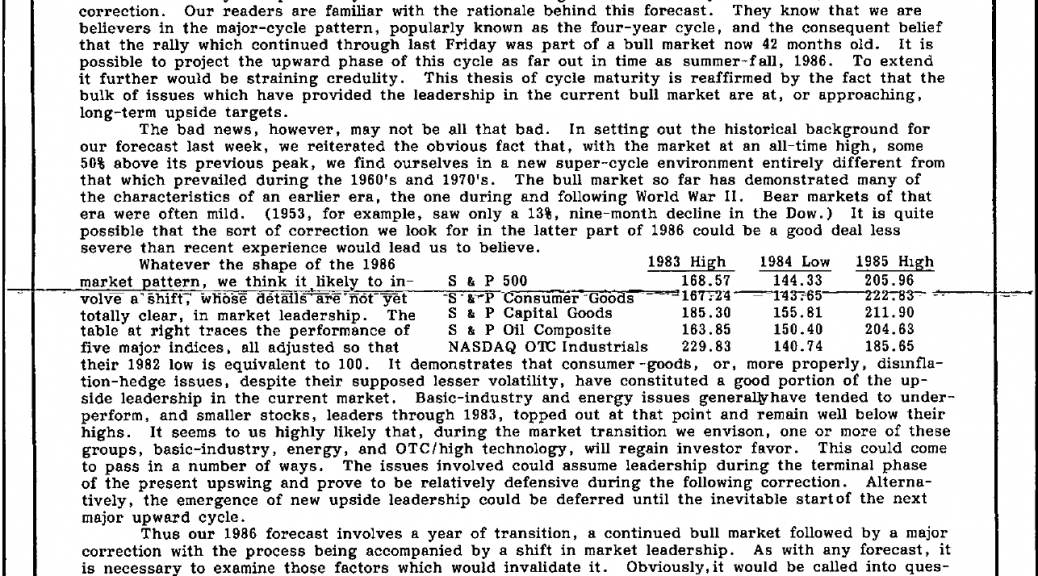 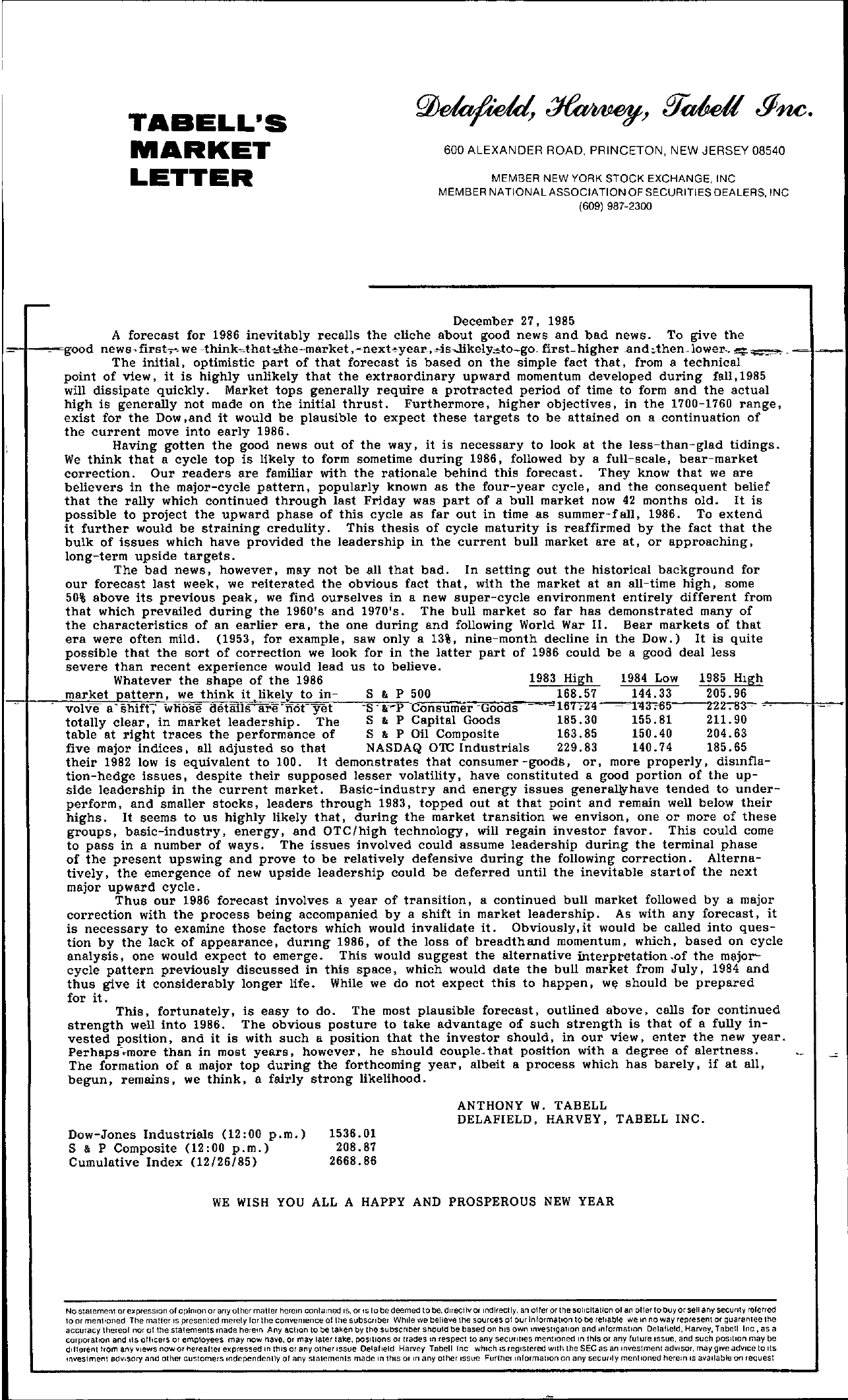