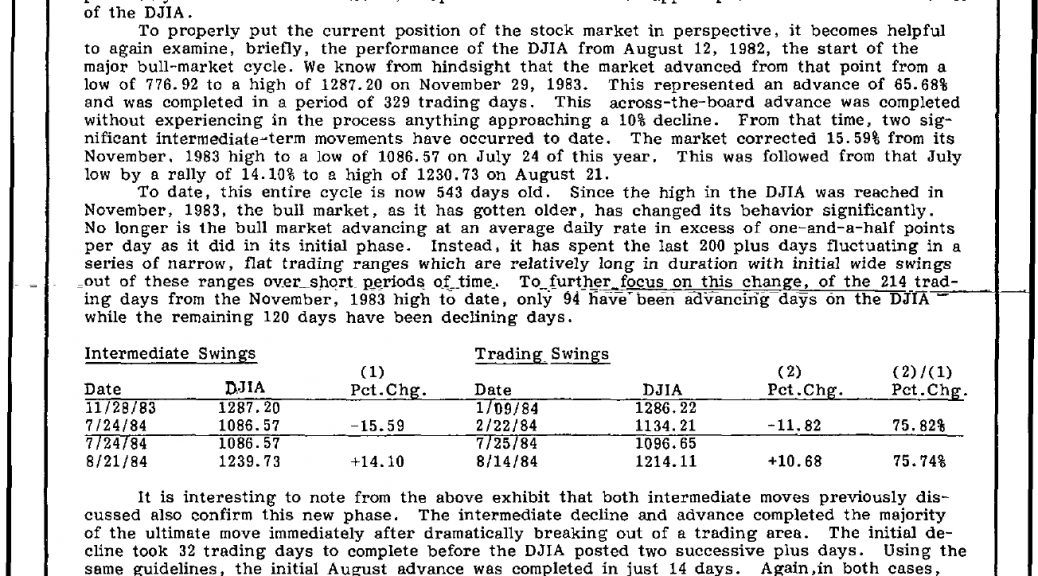 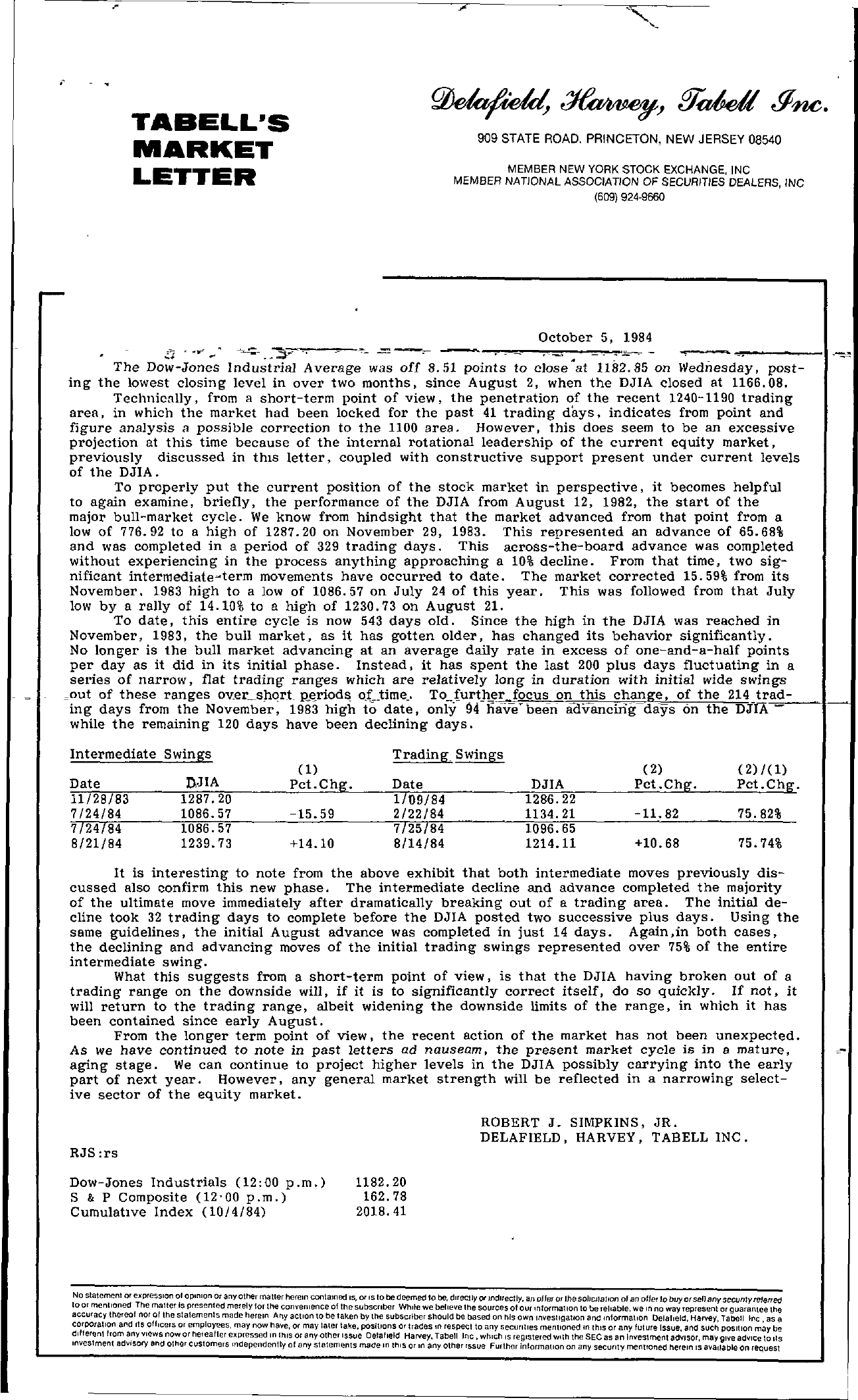 TABELL-S MARKET LETTER 909 STATE ROAD. PRINCETON, NEW JERSEY 08540 MEMBER NEW YORK STOCK EXCHANGE, INC MEMBER NATIONAL ASSOCIATION OF SECURITIES DEALERS, INC (609) 924-9660 October 5, 1984 ''J . tr …. – – – – – The Dow-Jones Industrial Average was off 8.51 points to close at 1182.85 on Wednesday, post- ing the lowest closing level in over two months, since August 2, when the DJIA closed at 1166.08. Technically, from a short-term point of view, the penetration of the recent 1240-1190 trading area, in which the market had been locked for the past 41 trading days, indicates from point and figure analysis a possible correction to the 1100 area. However, this does seem to be an excessive projection at this time because of the internal rotational leadership of the current equity market, previously discussed in th,S letter, coupled with constructive support present under current levels of the DJIA. To properly put the current position of the stock market in perspective, it becomes helpful to again examine, briefly, the performance of the DJIA from August 12, 1982, the start of the major bull-market cycle. We know from hindsight that the market advanced from that point from a low of 776.92 to a high of 1287.20 on November 29, 1983. This represented an advance of 65.68 and was completed in a period of 329 trading days. This across-the-board advance was completed without experiencing in the process anything approaching a 10 decline. From that time, two sig- nificant intermediate-term movements have occurred to date. The market corrected 15.59 from its November. 1983 high to a low of 1086.57 on July 24 of this year. This was followed from that July low by a rally of 14.10 to a high of 1230.73 on August 21. To date, this entire cycle is now 543 days old. Since the high in the DJIA was reached in November, 1983, the bull market, as it has gotten older, has changed its behavior significantly. No longer is the bull market advancing at an average daily rate in excess of one-and-a-half points per day as it did in its initial phase. Instead, it has spent the last 200 plus days fluctuating in a series of narrow, flat trading ranges which are relatively long in duration with initial wide swings out of these ranges oversport periods oJ. .time. To!urt1er focus on this change, of the 214 ;-;tra;,d;- I–I ing days from the November. 1983 high to date, only 94 have- been advancirig days on the DtIA While the remaining 120 days have been declining days. Intermediate Swings Date 11/28/83 7/24/84 7/24/84 8/21/84 nJ1A 1287.20 1086.57 1086.57 1239.73 (1) Pct.Chg. -15.59 14.10 Trading. Swings Date 1/09/84 2/22/84 7/25/84 8/14/84 DJIA 1286.22 1134.21 1096.65 1214.11 ( 2) Pct.Chg. -11. 82 10.68 (2)/(1) Pct.Chg. 75.82 75.74 It is interesting to note from the above exhibit that both intermediate moves previously discussed also confirm this new phase. The intermediate decline and advance completed the majority of the ultimate move immediately after dramatically breaking out of a trading area. The initial decline took 32 trading days to complete before the DJIA posted two successive plus days. Using the same guidelines, the initial August advance was completed in just 14 days. Again ,in both cases, the declining and advancing moves of the initial trading swings represented over 75 of the entire intermediate swing. What this suggests from a short-term pOint of view, is that the DJIA having broken out of a trading range on the downside will, if it is to significantly correct itself, do so quickly. If not, it will return to the trading range, albeit widening the downside limits of the range, in which it has been contained since early August. From the longer term point of view, the recent action of the market has not been unexpected. As we have continued to note in past letters ad nauseam, the present market cycle is in a mature, aging stage. We can continue to project higher levels in the DJIA possibly carrying into the early part of next year. However, any general market strength will be reflected in a narrowing select- ive sector of the equity market. RJS rs ROBERT J. SIMPKINS, JR. DELAFIELD, HARVEY, TABELL INC. Dow-Jones Industrials (1200 p.m.) S & P Composite (12-00 p.m.) CumulatIve Index (10/4/84) 1182.20 162.78 2018.41 NO statement or expresSion of opinion Or any other matter herein contained IS, or IS to be deemed 10 be, directly or mdJTeclly. an oller Of IhesoliCJlalJQn 01 an oller 1o bUYOfseIJany sccvfJly re/eITed to or mentioned The matter Is presented merety for the convenience of Ihe subSCriber While we believe the sources of our information 10 be reliable, we In no way represent or guarantee the accuracy thoreof nor of the statements made herein Any action to be taken by the subscriber should be based on hiS own investigation and mformallon Delafield Harvey Tabell Inc as a corporation and liS officers or employees, may now have, or may tater take, posItionS or trades m respe(t to any securities mentioned m thiS or any fulure Issue, nd such POSition my be different from any views nowor helealter expressed m thiS or any other Issue Oelafleld Harvey, Tabell Inc, which IS registered With the SECas an Investment adVisor, may give advice 10 ItS Investment advisory and other customers mdependenlly of any statements made In thiS or In any other Issue Further Information on any security mentioned herem IS available on request 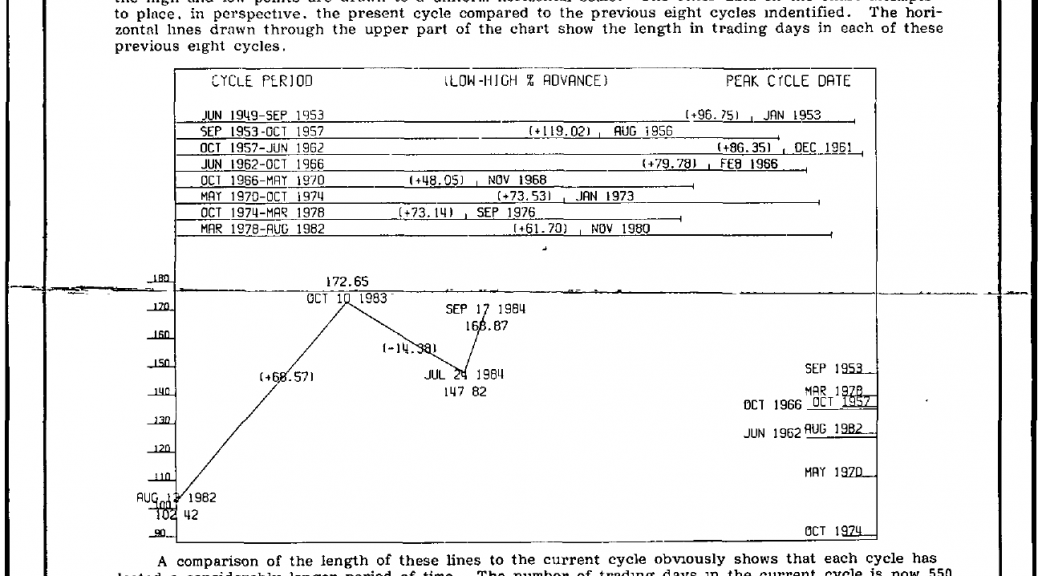 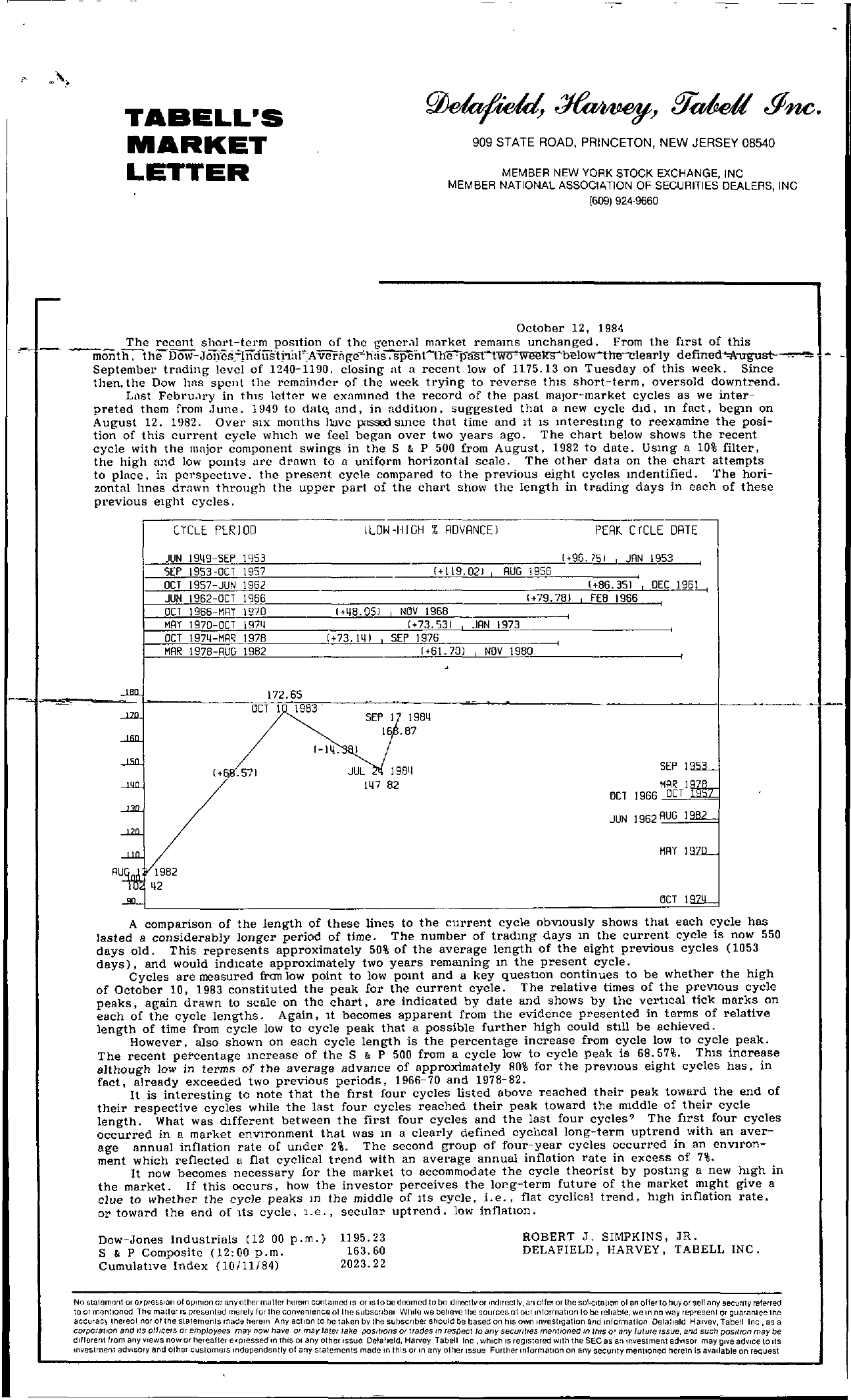 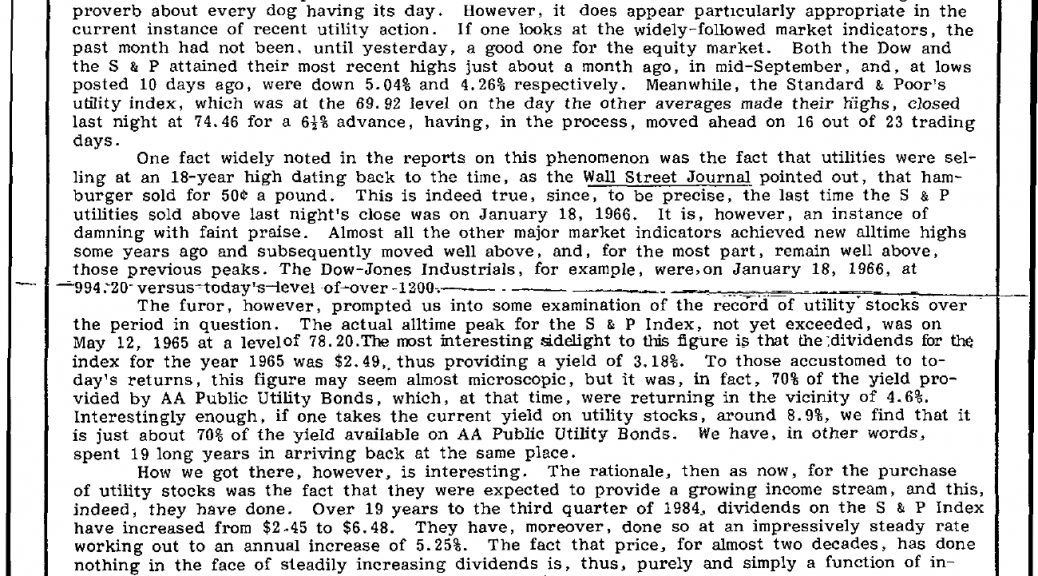 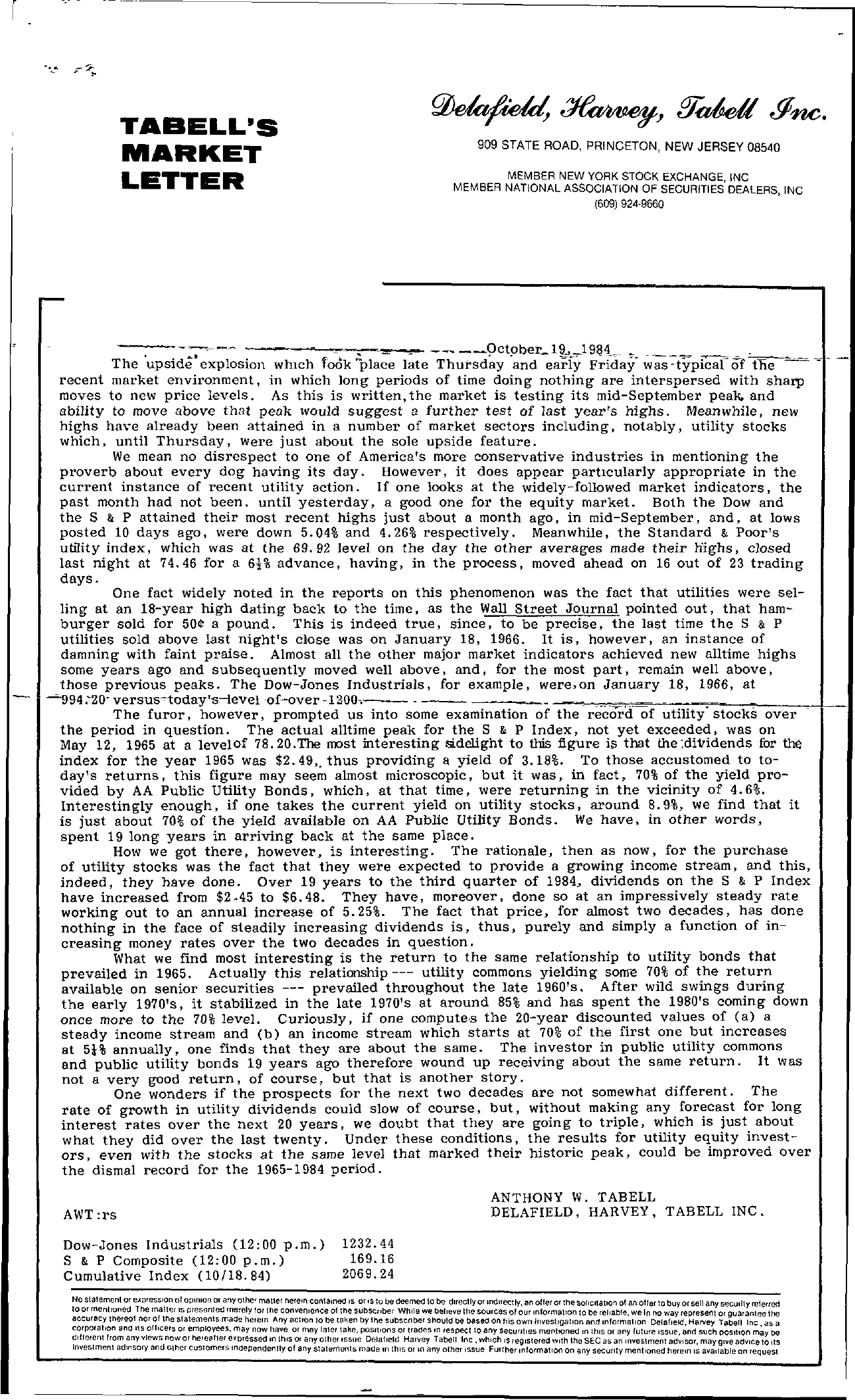 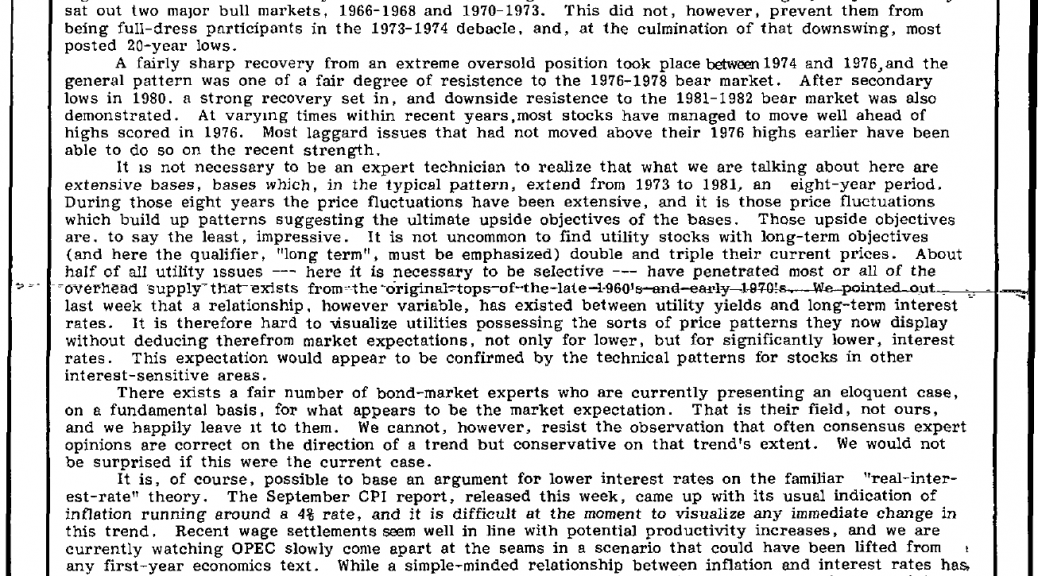 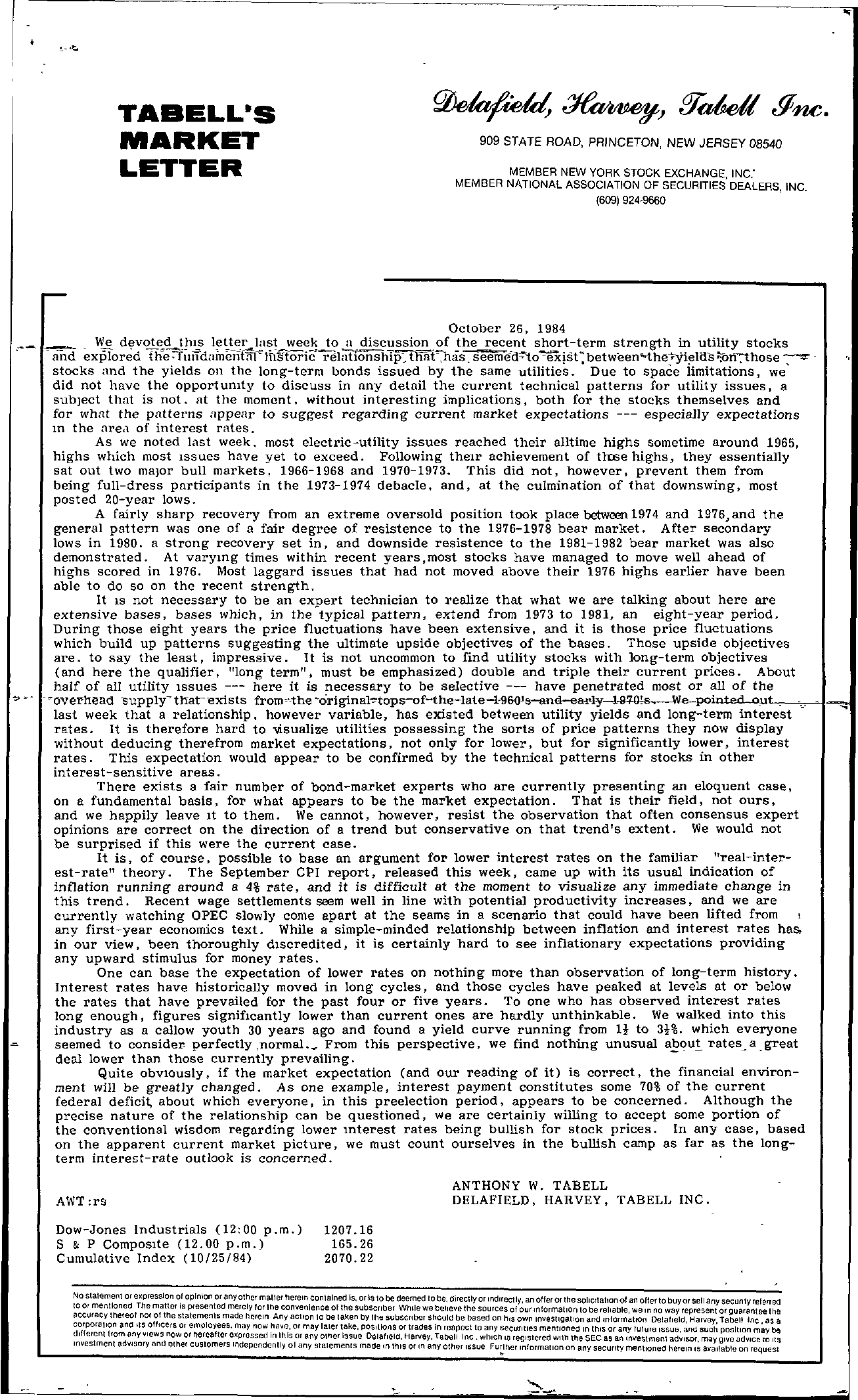