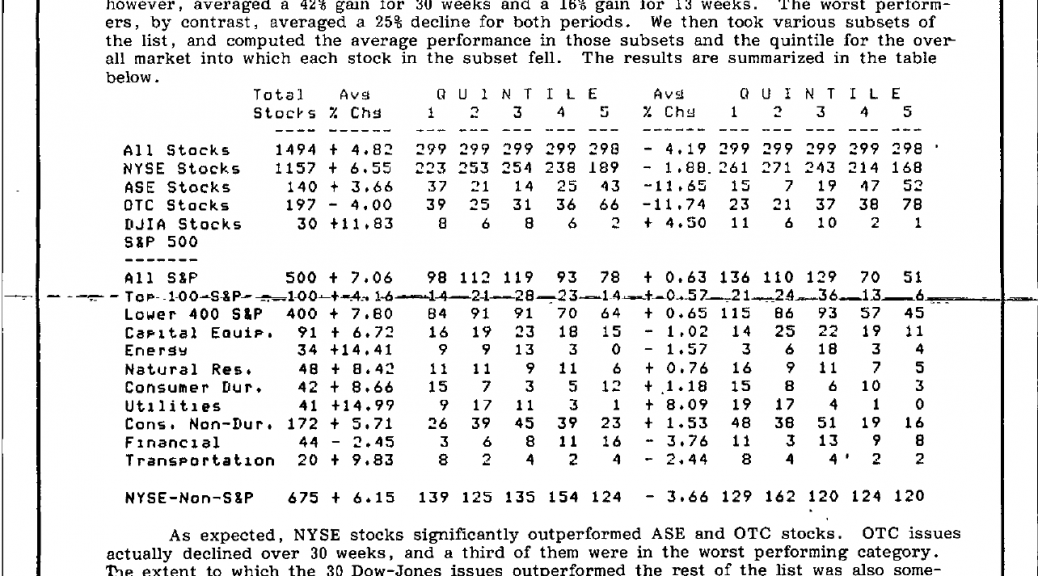 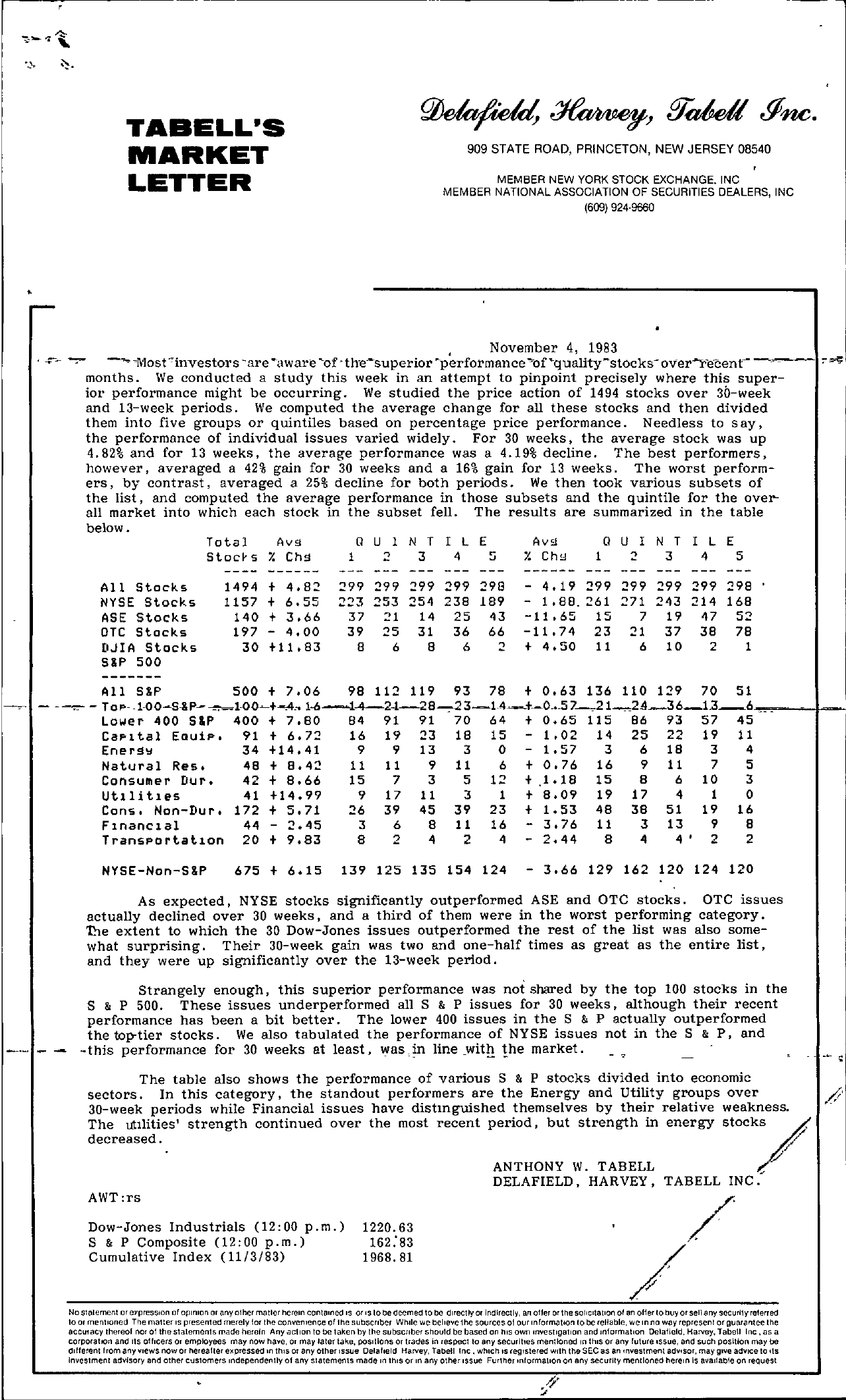 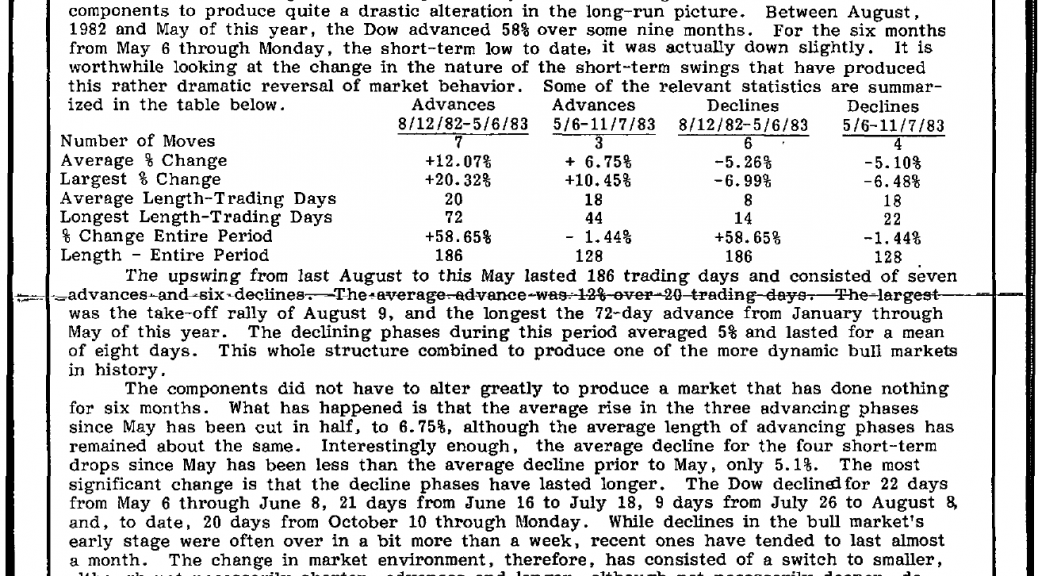 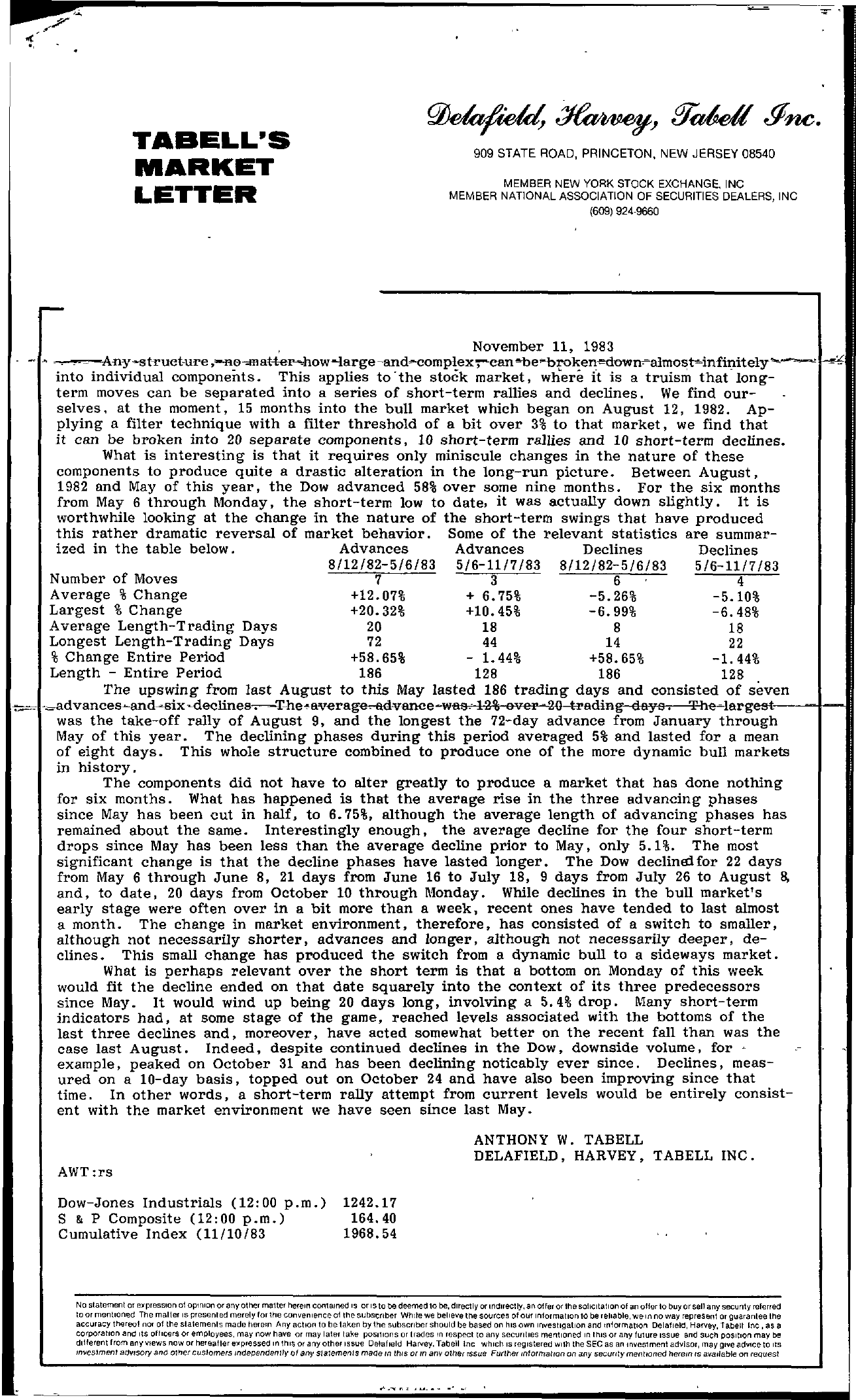 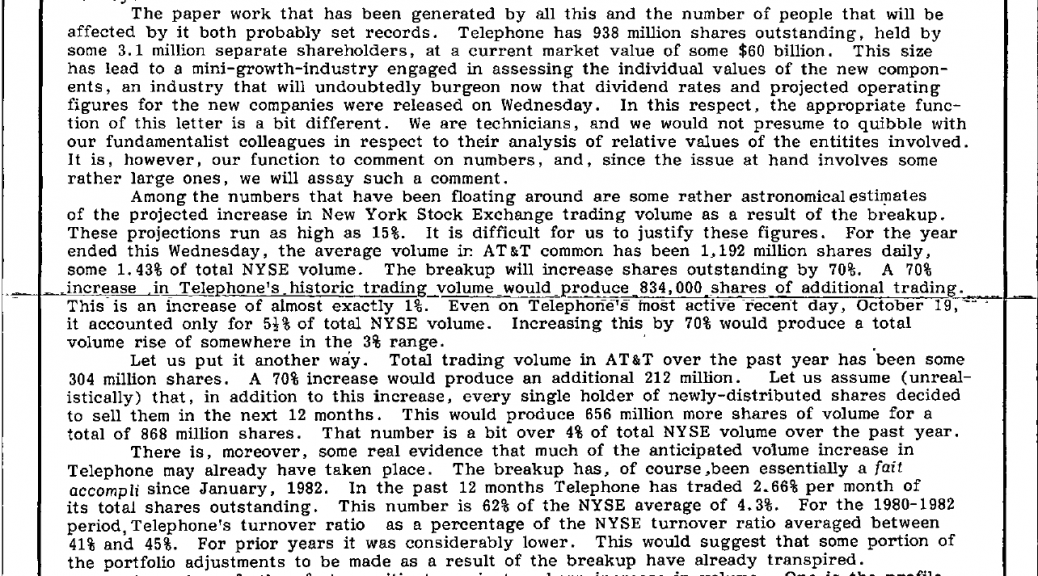 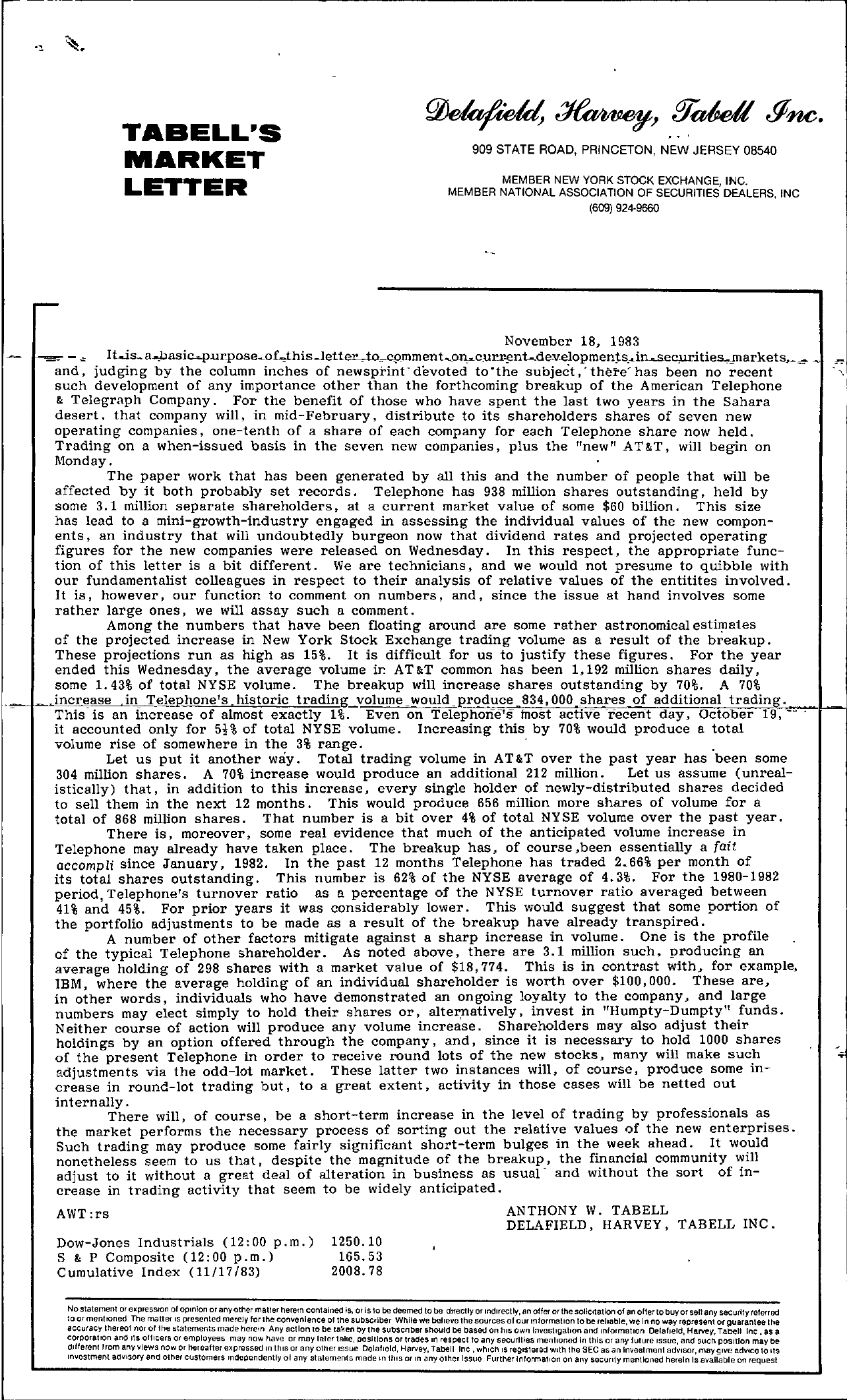 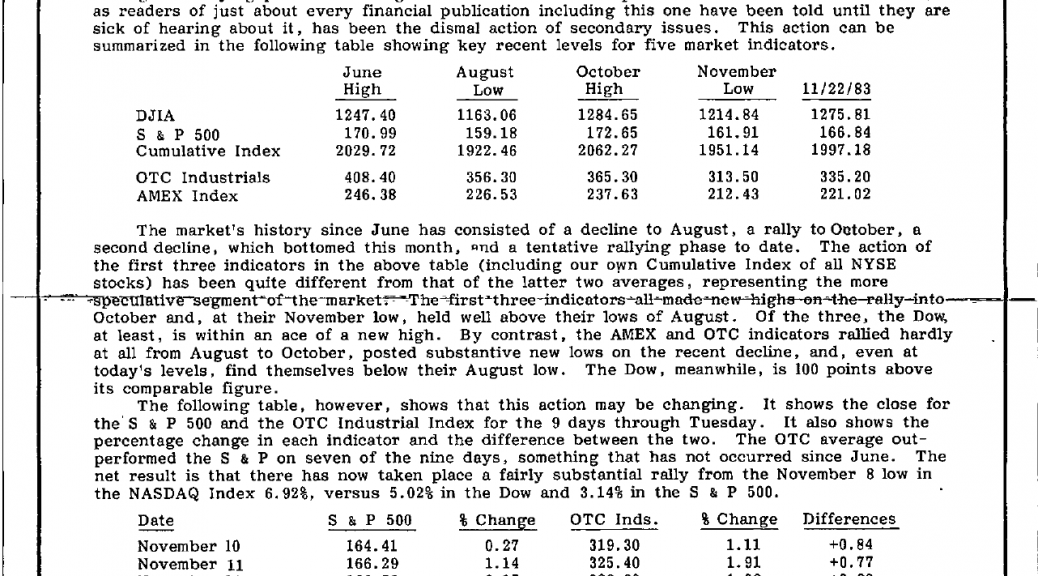 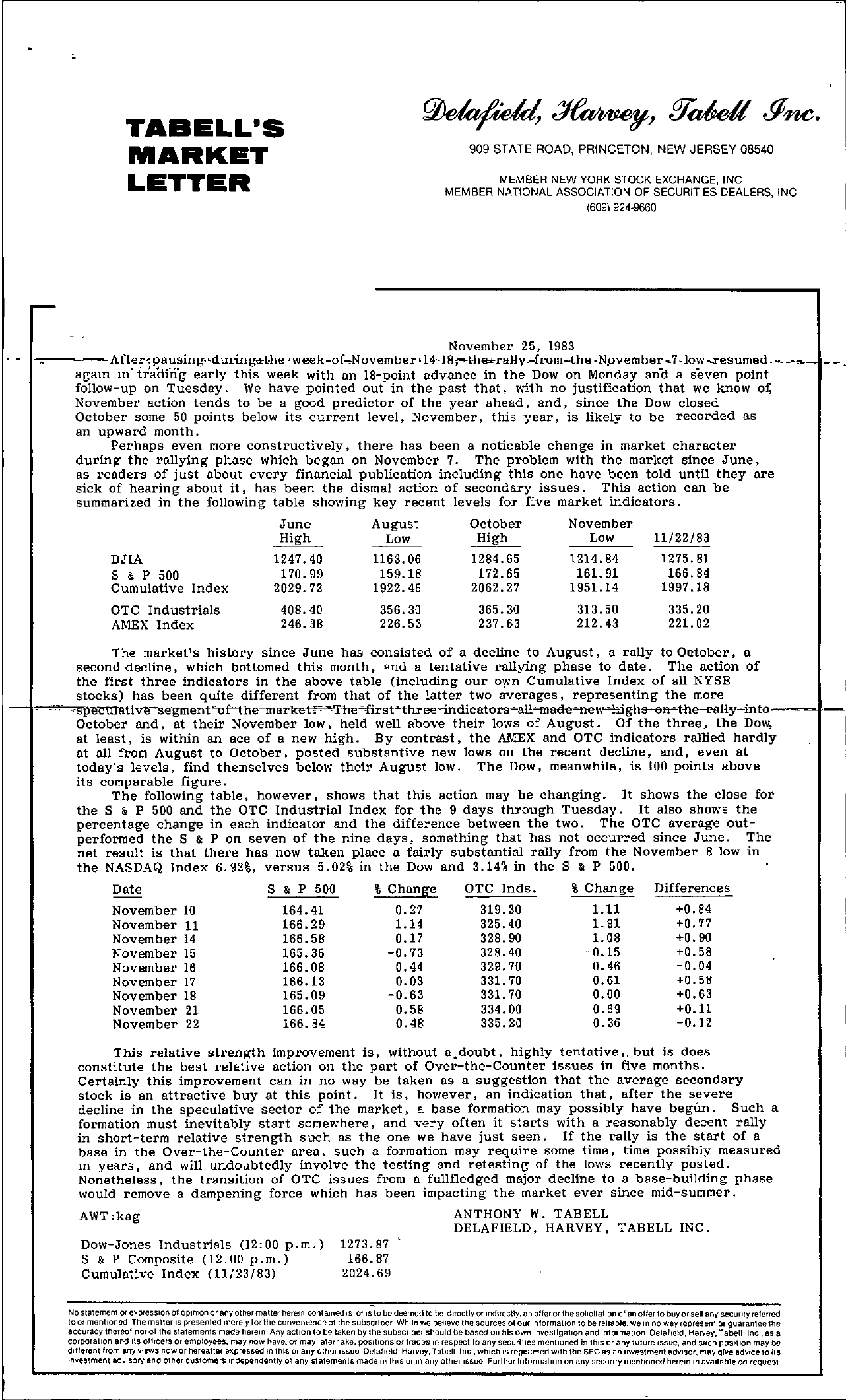 TABELL'S MARKET LETTER 909 STATE ROAD, PRINCETON, NEW JERSEY 08540 MEMBER NEW YORK STOCK EXCHANGE, INC MEMBER NATIONAL ASSOCIATION OF SECURITIES DEALERS, INC (609) 9249660 November 25, 1983 . '.I—Afterpausingduringt.he week-ofNovem ber '14-18.-t.herally..,from-the-N9vember..,.7low-lesumed . agam in fr'aafng early this week with an 18-!,oint advance in the Dow on Monday and a seven point follow-up on Tuesday. We have pointed out in the past that, with no justification that we know o November action tends to be a good predictor of the year ahead, and, since the Dow closed October some 50 points below its current level, November, this year, is likely to be recorded as an upward month. Perhaps even more constructively, there has been a noticable change in market character during the rallying phase which began on November 7. The problem with the market since June, as readers of just about every financial publication including this one have been told until they are sick of hearing about it, has been the dismal action of secondary issues. This action can be summarized in the following table showing key recent levels for five market indicators. June High August Low October High November Low 11122183 DJIA S & P 500 Cumulative Index 1247.40 170.99 2029.72 1163.06 159.18 1922.46 1284.65 172.65 2062.27 1214.84 161.91 1951.14 1275.81 166.84 1997.18 OTC Industrials AMEX Index 408.40 246.38 356.30 226.53 365.30 237.63 313.50 212.43 335.20 221. 02 The market's history since June has consisted of a decline to August, a rally to Ootober, a second decline, which bottomed this month, .nd a tentative rallying phase to date. The action of the first three indicators in the above table (including our own Cumulative Index of all NYSE stocks) has been quite different from that of the latter two averages, representing the more -'-',spCUlatiVl!–.egment-of-the-marketherst-three-indicatorsa1I-madighs–eH-the–i.aHy-into–I- October and, at their November low, held well above their lows of August. Of the three, the Dow, at least, is within an ace of a new high. By contrast, the AMEX and OTC indicators rallied hardly at all from August to October, posted substantive new lows on the recent decline, and, even at today's levels, find themselves below their August low. The Dow, meanwhile, is 100 points above its comparable figure. The following table, however, shows that this action may be changing. It shows the close for the'S & P 500 and the OTC Industrial Index for the 9 days through Tuesday. It also shows the percentage change in each indicator and the difference between the two. The OTC average outperformed the S & P on seven of the nine days, something that has not occurred since June. The net result is that there has now taken place a fairly substantial rally from the November 8 low in the NASDAQ Index 6.92, versus 5.02 in the Dow and 3.14 in the S & P 500. Date S & P 500 Change OTC Inds. Change Differences November 10 November 11 November 14 November 15 November 16 November 17 November 18 November 21 November 22 164.41 166.29 166.58 165.36 166.08 166.13 165.09 166.05 166.84 0.27 1.14 0.17 -0.73 0.44 0.03 -0.63 0.58 0.48 319.30 325.40 328.90 328.40 329.70 331. 70 331. 70 334.00 335.20 1.11 1. 91 1. 08 -0.15 0.46 0.61 0.00 0.69 0.36 0.84 0.77 0.90 0.58 -0.04 0.58 0.63 0.11 -0.12 This relative strength improvement is, without a.doubt, highly tentative but is does constitute the best relative action on the part of Over-the-Counter issues in five months. Certainly this improvement can in no way be taken as a suggestion that the average secondary stock is an attracive buy at this point. It is. however, an indication that, after the severe decline in the speculative sector of the market, a base formation may possibly have begun. Such a formation must inevitably start somewhere, and very often it starts with a reasonably decent rally in short-term relative strength such as the one we have just seen. If the rally is the start of a base in the Over-the-Counter area, such a formation may require some time, time possibly measured m years, and will undoubtedly involve the testing and retesting of the lows recently posted. Nonetheless, the transition of OTC issues from a fullfledged major decline to a base-building phase would remove a dampening force which has been impacting the market ever since mid-summer. AWTkag Dow-Jones Industrials (12 00 p. m. ) 1273.87 S & P Composite (12. 00 p. m. ) 166.87 Cumulative Index (11123183) 2024.69 ANTHONY W. TABELL DELAFIELD, HARVEY, TABELL INC. No statement or expression 01 oplOlon or any other matter herem contained IS or IS to be deemed to be directly or indirectly, an offer or the solicitation of an olfar 10 buyor sell any security referred toO! mentioned The malter IS presented merely forthc convenience of the subscriber While we believe the sources of our Information to be reliable, we In nowey represent or guaranteethe eccuracy threof norof the statements made herein Any action to be taken by the subSCflbrshould be based on his own Investigation and information Delafield, Harvey, Tabel1 Inc, as a COlporallon and Its officers or empfoyees, may now have, or may lalerlake, poSitions or trades In respect to any securities mentioned In thiS or any future ISSIJC, and such POSition may be different from any views nowor hereafter e)(pressed In this or any other Issue Delafield Harvey, Tabel! Inc, which IS registered With the SEC as an Investment edvlsor, may give adVice to Us investment advisory and o1t1er customers Independentfy of any stafements made In thiS or In any other ISSIJC Further Information on any secullty mentioned herein IS available on reQueSI