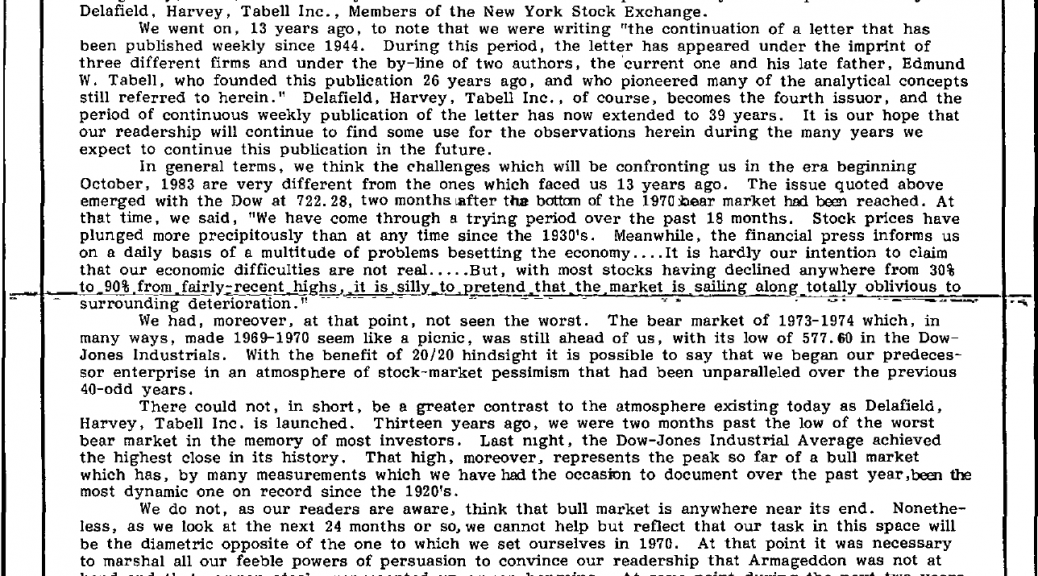 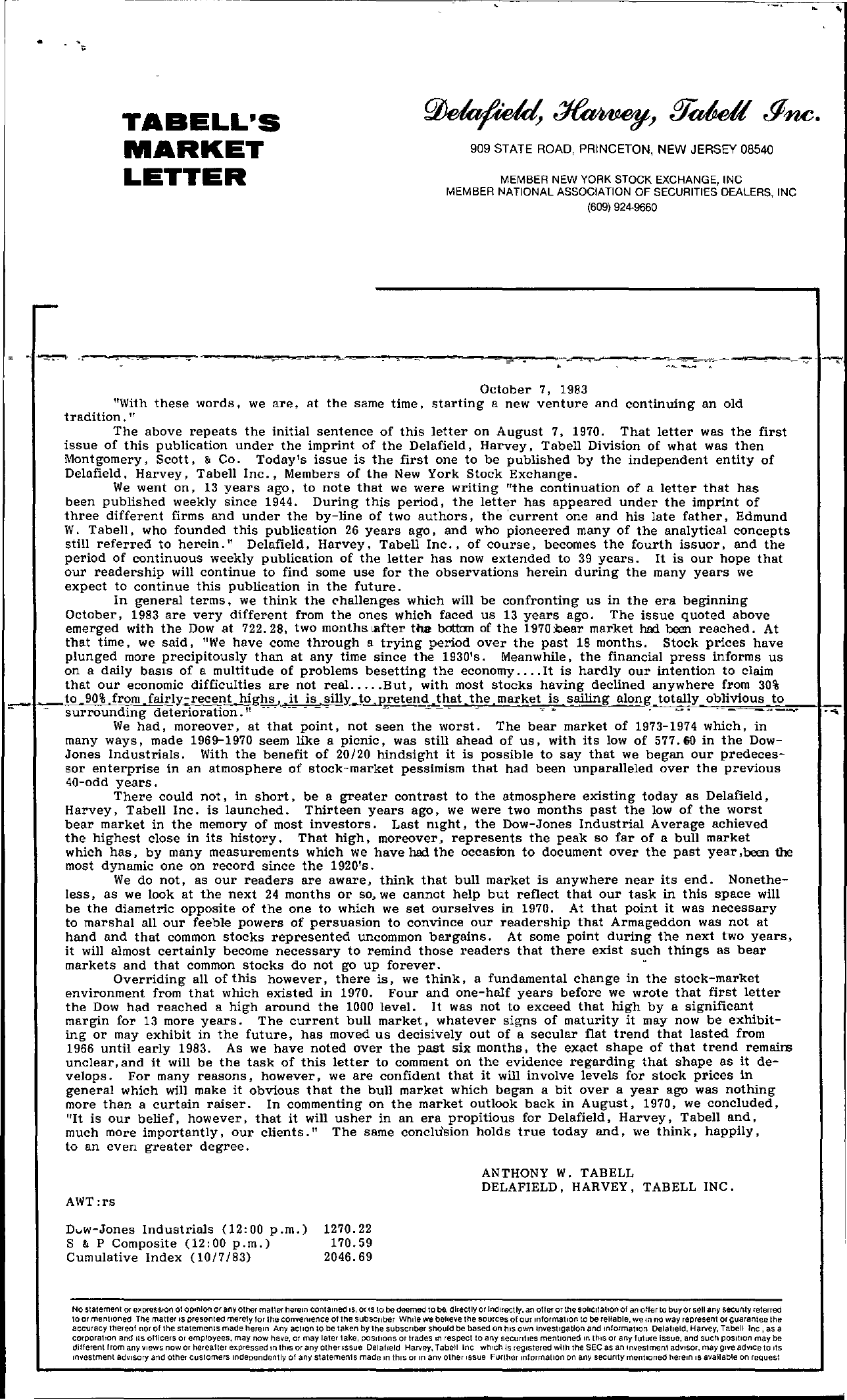 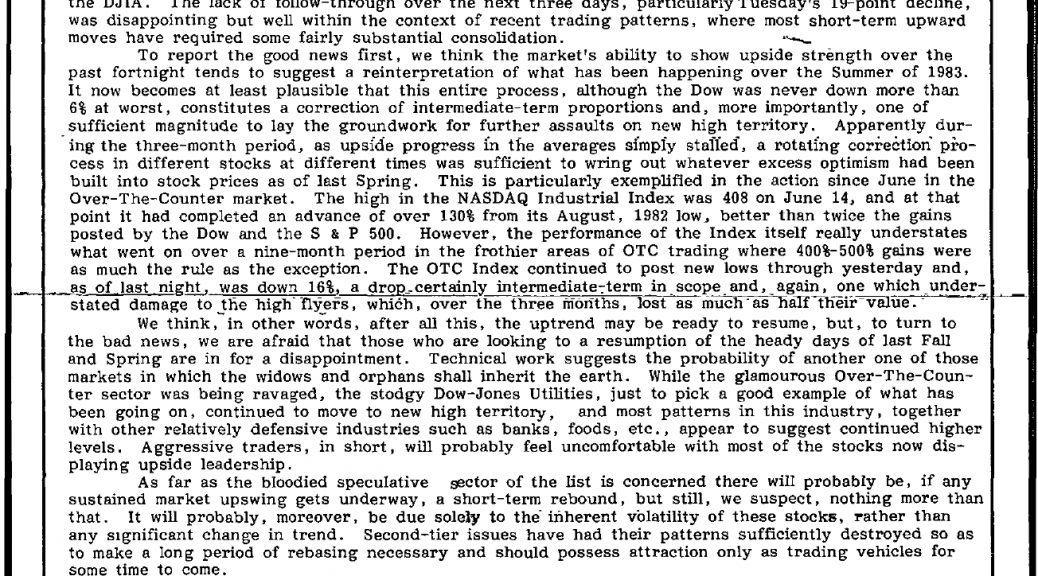 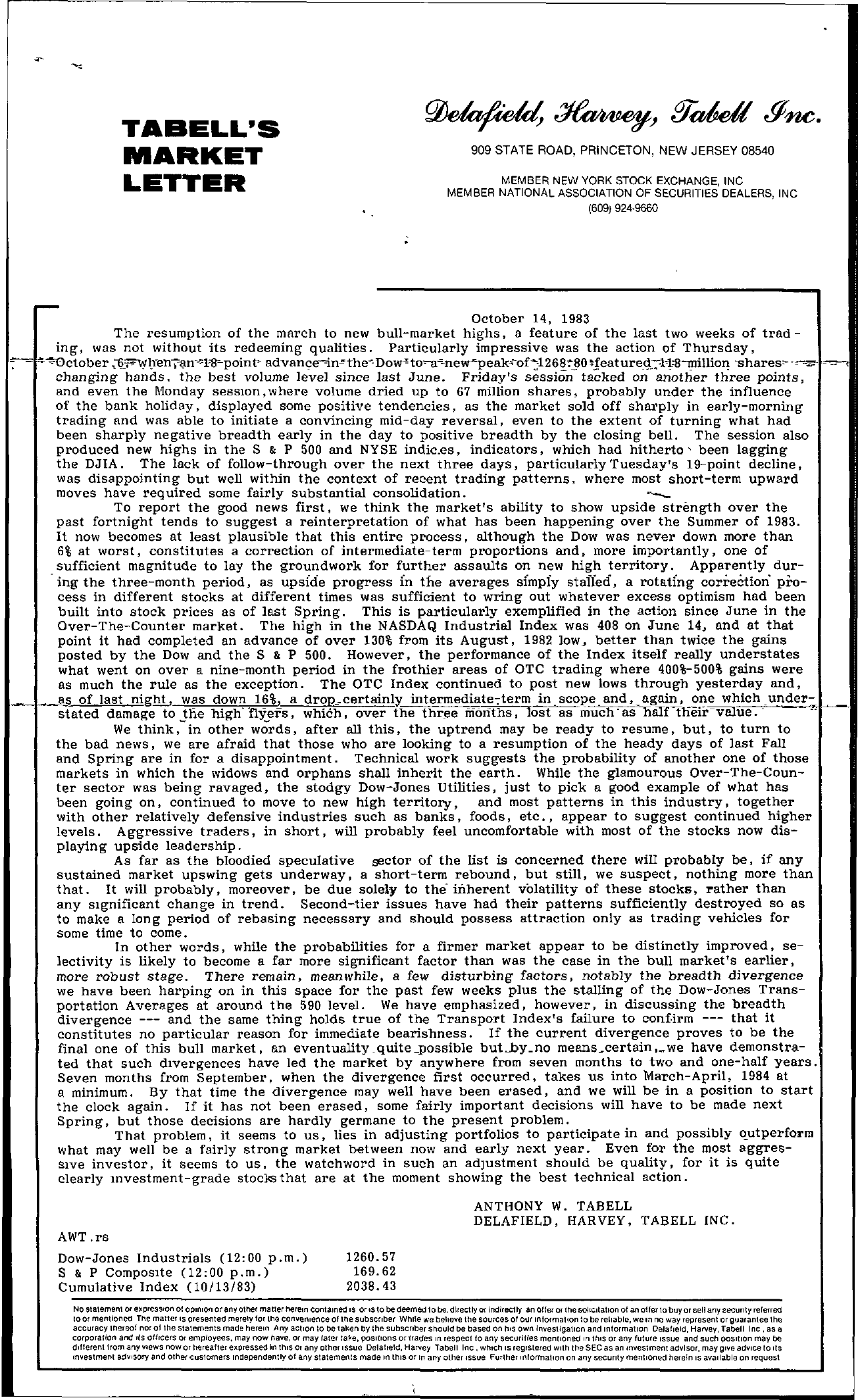 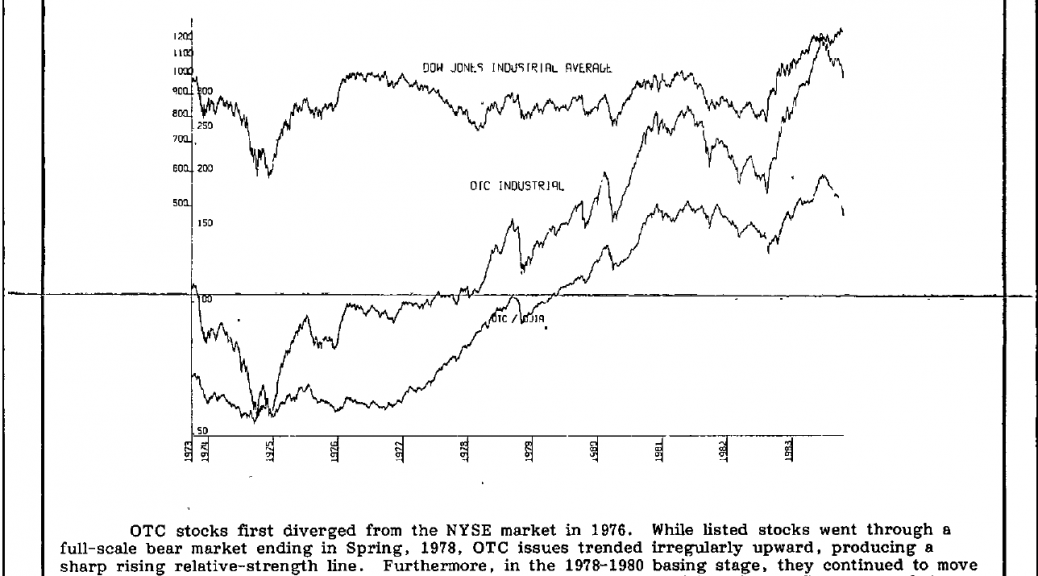 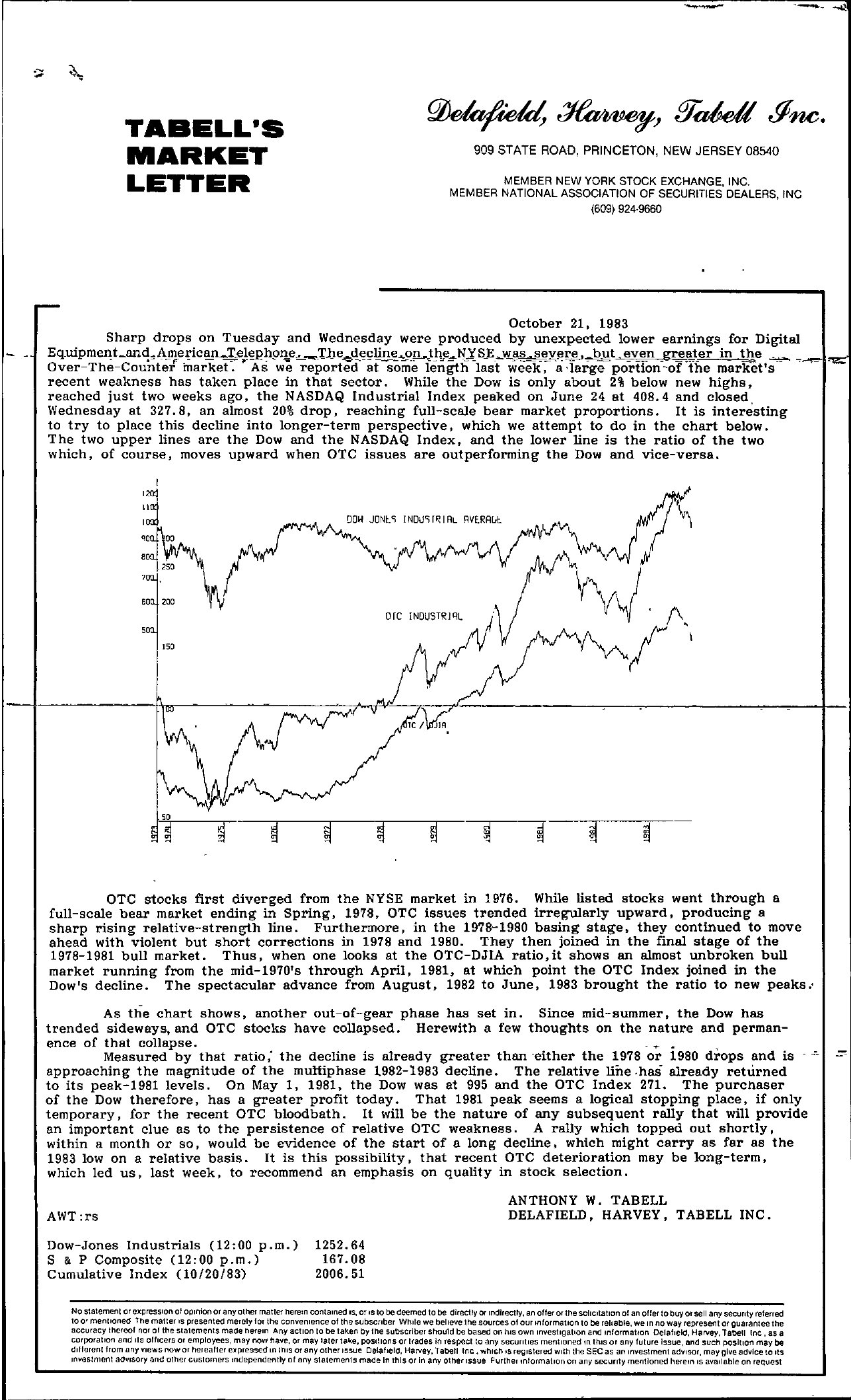 – TABELL'S MARKET LETTER 909 STATE ROAD, PRINCETON, NEW JERSEY 08540 MEMBER NEW YORK STOCK EXCHANGE, INC. MEMBER NATIONAL ASSOCIATION OF SECURITIES DEALERS, INC (609) 9249660 October 21, 1983 Sharp drops on Tuesday and Wednesday were produced by unexpected lower earnings for Digital Equipmentan!,Aec'!!1,!,e.lphp'l.e-.T.be,,!eJ!!.l.,,,cn heN.xSEl'Ll's sy!!!;!', bJ!,t ven gre!,er in the….,… -,.J,,d Over-The-Counter market. As we reported at some length last week, a large portion 'of the market's recent weakness has taken place in that sector. While the Dow is only about 2 below new highs, reached just two weeks ago, the NASDAQ Industrial Index peaked on June 24 at 408.4 and closed, Wednesday at 327.8, an almost 20 drop, reaching full-scale bear market proportions. It is interesting to try to place this decline into longer-term perspective, which we attempt to do in the chart below. The two upper lines are the Dow and the NASDAQ Index, and the lower line is the ratio of the two which, of course, moves upward when OTC issues are outperforming the Dow and vice-versa. I ''''1 INDu,rIRL RVRALt ore INDUSTRI,.N tv OTC stocks first diverged from the NYSE market in 1976. While listed stocks went through a full-scale bear market ending in Spring, 1978, OTC issues trended irregularly upward, producing a sharp rising relative-strength line. Furthermore, in the 1978-1980 basing stage, they continued to move ahead with violent but short corrections in 1978 and 1980. They then joined in the final stage of the 1978-1981 bull market. Thus, when one looks at the OTC-DJIA ratio,it shows an almost unbroken bull market running from the mid-1970's through April, 1981, at which point the OTC Index joined in the Dow's decline. The spectacular advance from August, 1982 to June, 1983 brought the ratio to new peaks.' As the chart shows, another out-of-gear phase has set in. Since mid-summer, the Dow has trended sideways, and OTC stocks have collapsed. Herewith a few thoughts on the nature and perman- ence of that collapse. '' . Measured by that ratio; the decline is already greater than 'either the 1978 or 1980 drops and is – .. approaching the magnitude of the multiphase 1982-1983 decline. The relative line haS already returned to its peak-1981 levels. On May I, 1981, the Dow was at 995 and the OTC Index 271. The purChaser of the Dow therefore, has a greater profit today. That 1981 peak seems a logical stopping place, if only temporary, for the recent OTC bloodbath. It will be the nature of any subsequent rally that will provide an important clue as to the persistence of relative OTC weakness. A rally which topped out shortly, within a month or so, would be evidence of the start of a long decline, which might carry as far as the 1983 low on a relative basis. It is this possibility, that recent OTC deterioration may be long-term, which led us, last week, to recommend an emphasis on quality in stock selection. AWTrs ANTHONY W. TABELL DELAFIELD, HARVEY, TABELL INC. Dow-Jones Industrials (1200 p.m.) 1252.64 S & P Composite (1200 p.m.) 167.08 Cumulative Index (10/20/83) 2006.51 No statement or expression 01 opinion or any other matter herem contamed IS, or IS to be deemed to be directly Of Indirectly, an offer or the soliCitation of an offer to buy or sell any secunty referred to o' mentioned The maIler IS presented merely for the convenience of the 5ubscnber White we believe the sources 01 our Informatton to be rehabIe, we In no way represent or guarantee the accuracy thercof nor of the statements made herein Any action to be taken by the subscriber ShoUld be based on hiS own Investlgahon and information Delafield, Harvey, labell Inc, as a corporation and Its officers or employees, may now have, or may tater take, poSitions or trades In respect to any securities mentioned In thiS or any future Issue, and such position may be different from any views nowor hereafter expressed rn thiS or any other Issue Delafield, Harvey, labell Inc, which IS registered With the SECas an Investment adVisor, may give advice to Its !nvestment adVisory and other customers rndependently of any statements made In this or In any other Issue Further rnformatlOnon any security mentioned herem IS available on request 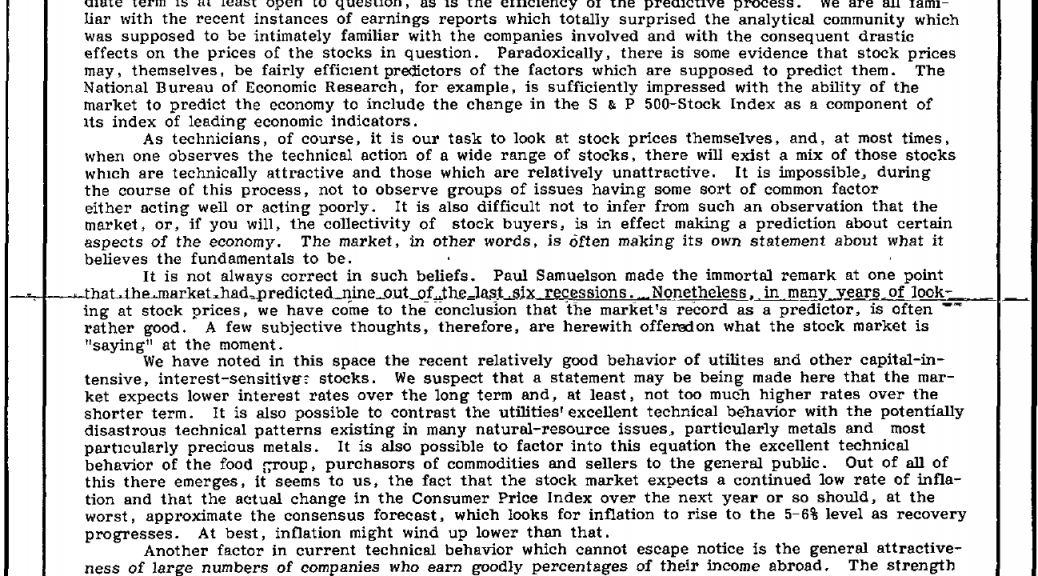 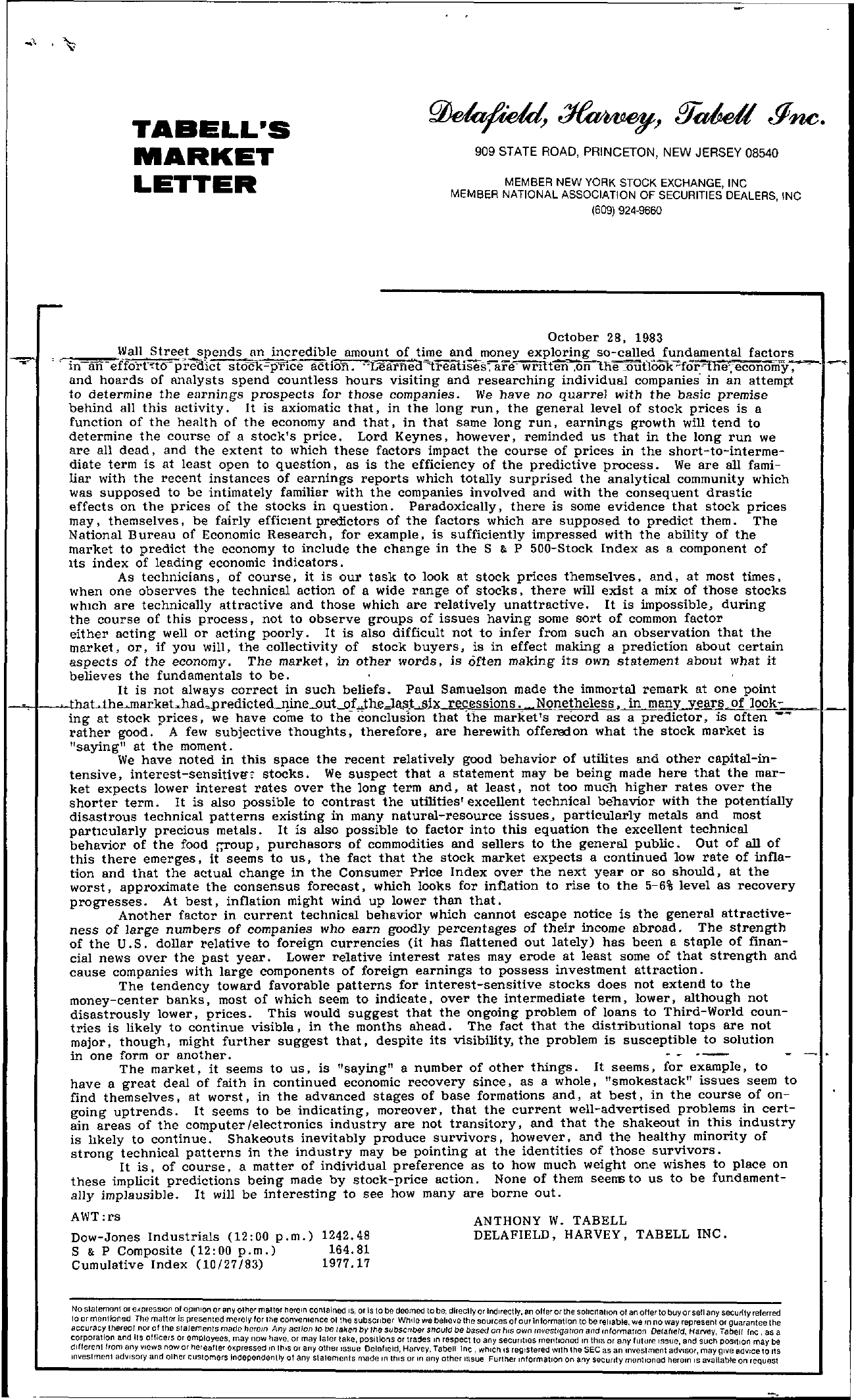