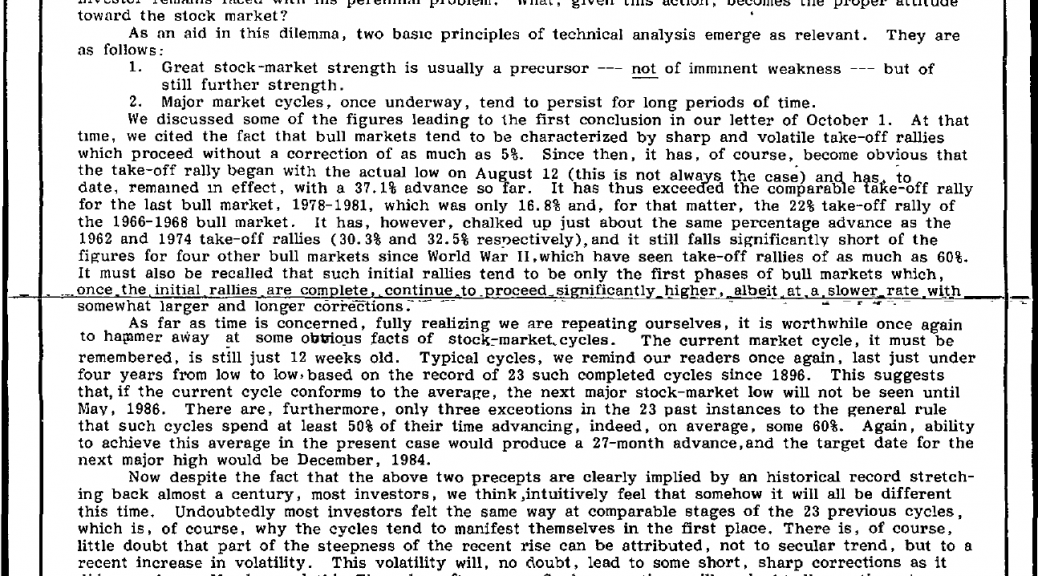 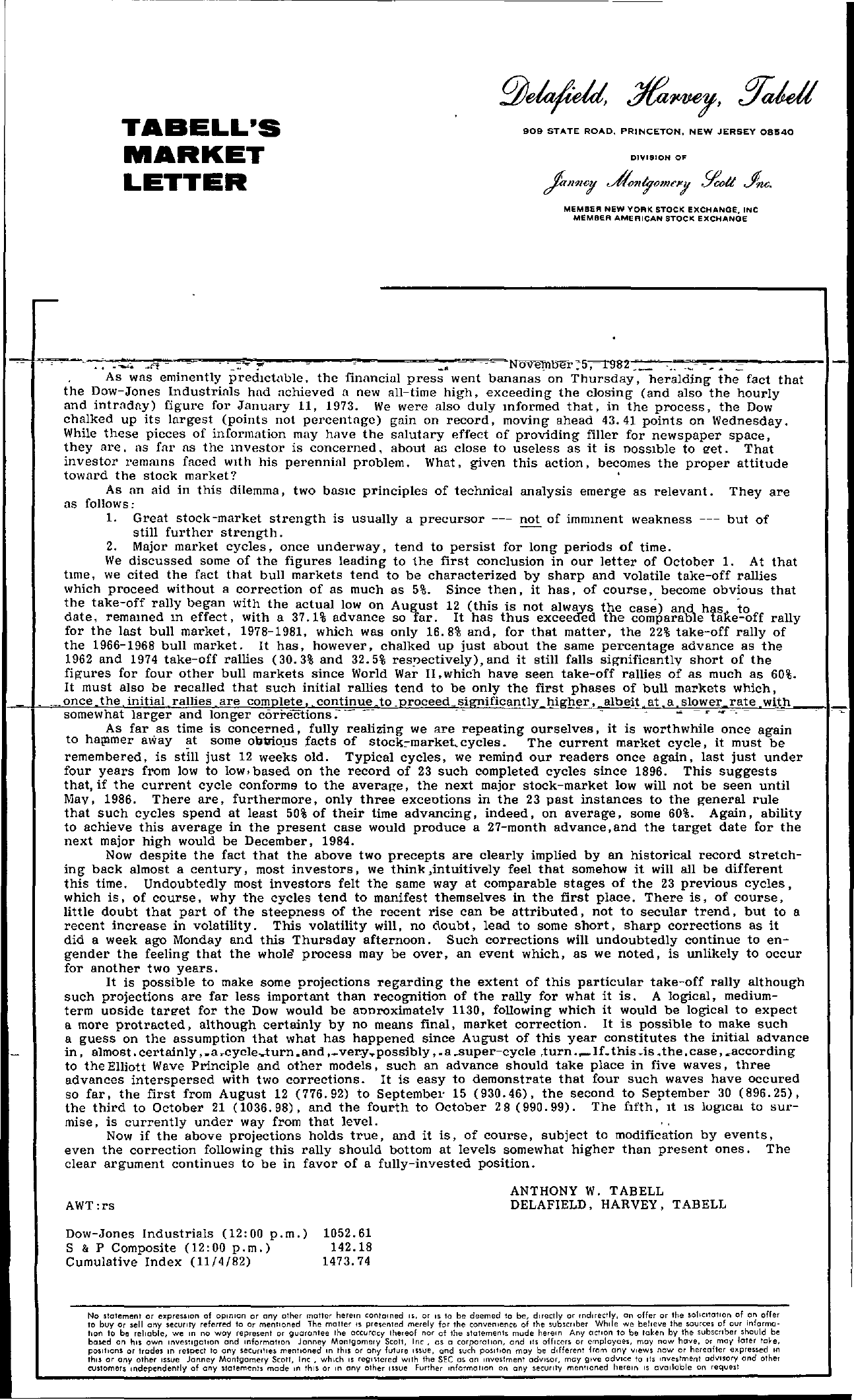 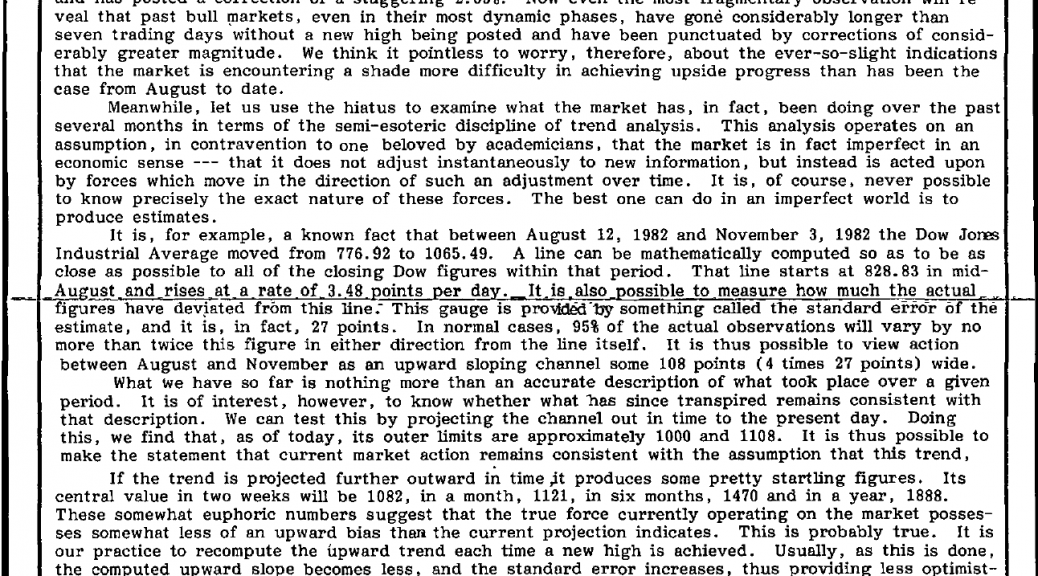 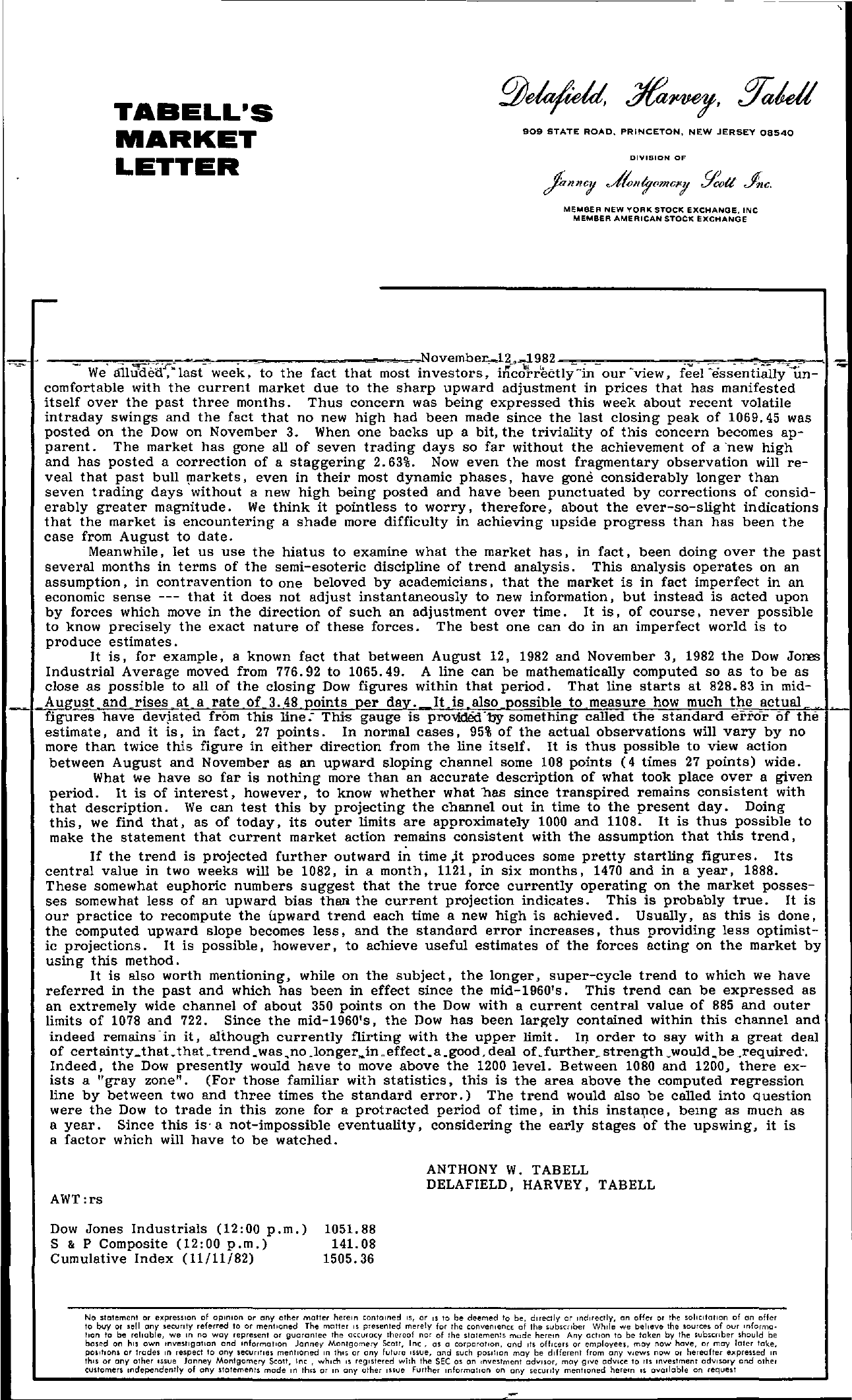 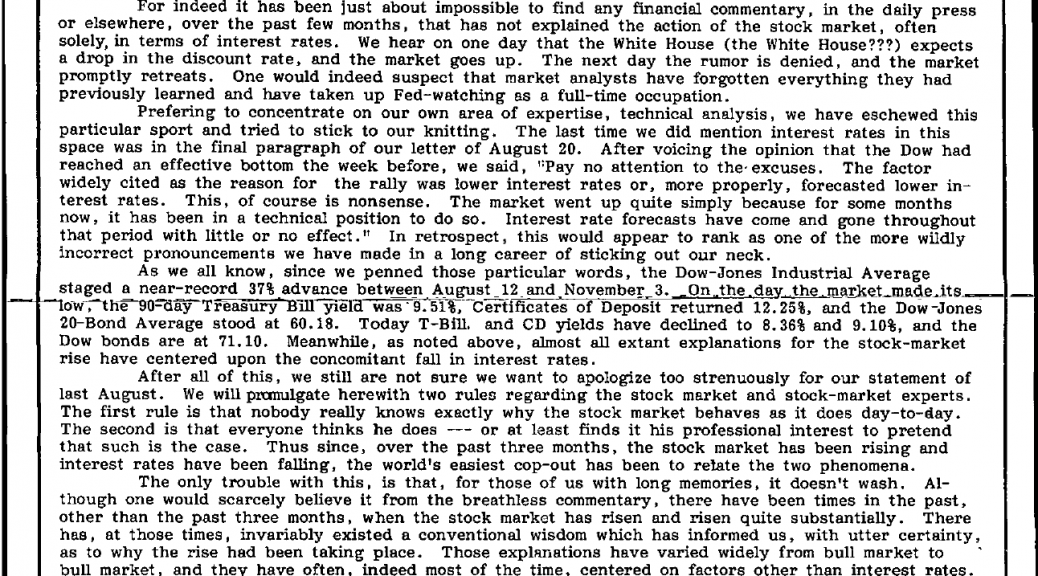 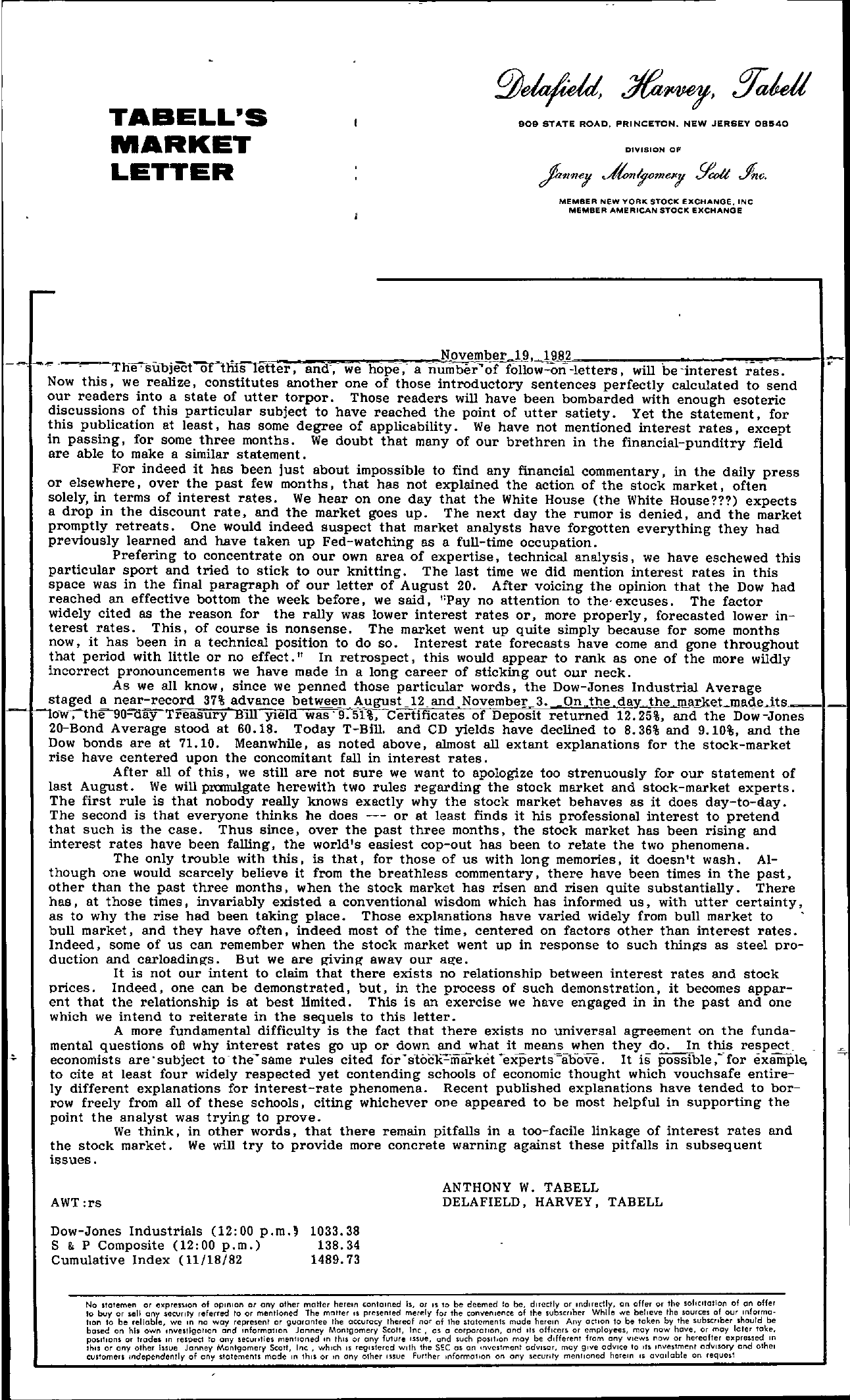 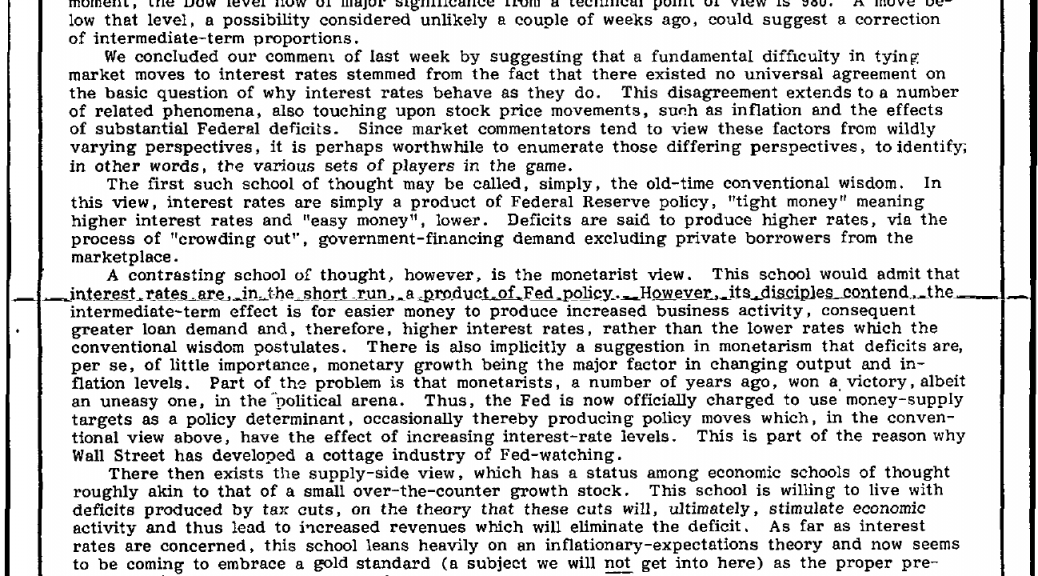 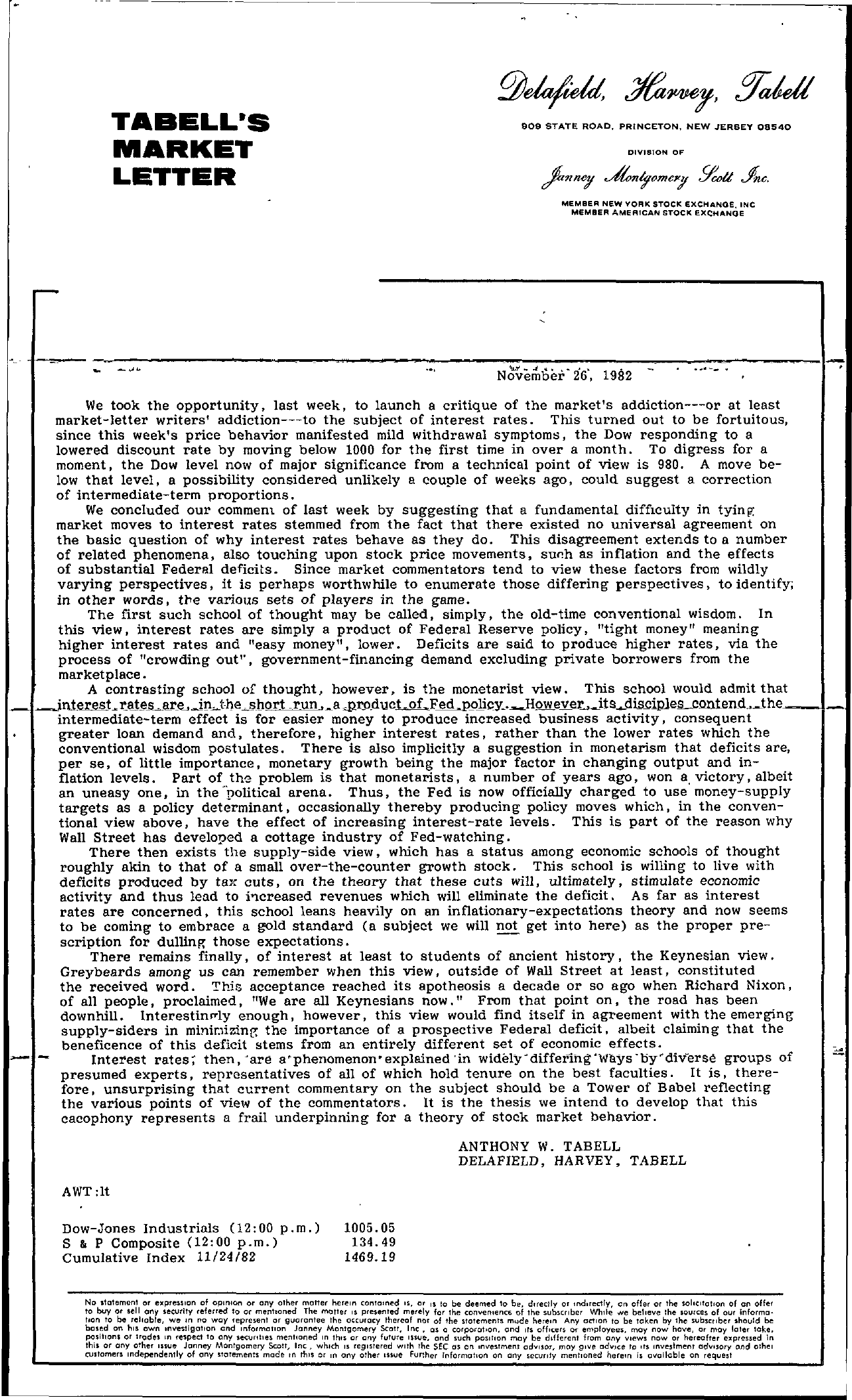 ————————————————————————————-., TABELLS MARKET LETTER 909 STATE ROAD, PRINCETON, NEW JERSEY 08540 DIVISION OF MEMBER New YORK STOCK EXCHANGE, INC MEMBER AMERICAN STOCK EXCHANGE It.7' .J November 26, 1982 — … We took the opportunity, last week, to launch a critique of the market's addiction—or at least market-letter writers' addiction—to the subject of interest rates. This turned out to be fortuitous, since this week's price behavior manifested mild withdrawal symptoms, the Dow responding to a lowered discount rate by moving below 1000 for the first time in over a month. To digress for a moment, the Dow level now of major significance from a technical point of view is 980. A move be- low that level, a possibility considered unlikely a couple of weeks ago, could suggest a correction of intermediate-term proportions. We concluded our comment of last week by suggesting that a fundamental diffIculty in tying market moves to interest rates stemmed from the fact that there existed no universal agreement on the basic question of why interest rates behave as they do. This disagreement extends to a number of related phenomena, also touching upon stock price movements, sup.h as inflation and the effects of substantial Federal deficits. Since market commentators tend to view these factors from wildly varying perspectives, it is perhaps worthwhile to enumerate those differing perspectives, to identify; in other words, t/1e various sets of players in the game. The first such school of thought may be called, simply, the old-time conventional wisdom. In this view, interest rates are simply a product of Federal Reserve policy, tight money meaning higher interest rates and easy money, lower. Deficits are said to produce higher rates, via the process of crowding out, government-financing demand excluding private borrowers from the marketplace. A contrasting school of thought, however, is the monetarist view. This school would admit that 1 n1. atstLe..JI1th(Ubort .run ,a Jl-t9ducL.2!..Fed P.9Jjcy.H9wever.,JtsdiB.QipJefLcontendthe–I intermediate-term effect is for easier money to produce increased business activity, consequent greater loan demand and, therefore, higher interest rates, rather than the lower rates which the conventional wisdom postulates. There is also implicitly a suggestion in monetarism that deficits are, per se, of little importa..'lce, monetary growth being the major factor in changing output and inflation levels. Part of the problem is that monetarists, a number of years ago, won a, victory, albeit an uneasy one, in the political arena. Thus, the Fed is now officially charged to use money-supply targets as a policy determinant, occasionally thereby producing policy moves which, in the conven- tional view above, have the effect of increasing interest-rate levels. This is part of the reason why WaH Street has developed a cottage industry of Fed-watching. There then exists the supply-side view, which has a status among economic schools of thought roughly akin to that of a small over-the-counter growth stock. This school is willing to live with deficits produced by tax cuts, on the theory that these cuts will, ultimately, stimulate economic activity and thus lead to hcreased revenues which will eliminate the deficit. As far as interest rates are concerned, this school leans heavily on an inflationary-expectations theory and now seems to be coming to embrace a gold standard (a subject we will not get into here) as the proper pre- scription for dullinp; those expectations. There remains finally, of interest at least to students of ancient history, the Keynesian view. Greybeards among us can remember when this view, outside of Wall Street at least, constituted the received word. This acceptance reached its apotheosis a decade or so ago when Richard Nixon, of all people, proclaimed, We are all Keynesians now. From that point on, the road has been downhill. InterestinOly enough, however, this view would find itself in agreement with the emerging supply-siders in minir.1izinr the importance of a prospective Federal deficit, albeit claiming that the – – beneficence of this deficit stems from an entirely different set of economic effects. Interest rates; then, are a'phenomenon' explained 'in widelydifferihg'Ways 'oy'div-erse groups of presumed experts, representatives of all of which hold tenure on the best faculties. It is, therefore. unsurprising that current commentary on the subject should be a Tower of Babel reflecting the various points of view of the commentators. It is the thesis we intend to develop that this cacophony represents a frail underpinning for a theory of stock market behavior. ANTHONY W. TABELL DELAFIELD, HARVEY, TABELL AWTlt Dow-Jones IndustrinIs (1200 p.m.) S & P Composite (1200 p,m.) Cumulative Index 11/24182 1005.05 134.49 1469.19 No statement or expreSSion of opinion or any olher moNer herein conlo,ed IS, or IS 10 be deemed to be directly or mdHectly on oHer or the SoliCitation of on offer to buy or sell any security referred to Of mentioned The moiler IS presented merely for Ihe convenlenc!; of the subscriber WhIle -He believe the sources of our Informo tlon to be reliable, we m no way reprerent or guarantee the accuracy thereof nor of the statements mude herem Any actIOn 10 be laken by the subscriber shOUld be based on hiS own ,vestlgolton and information Janney Montgomery Scott, Inc. as a corpora/lon, and lIS offuers or employees, may now have, at may later toke. poslttons or trades In respect to ony secunhes mentioned In thiS or any future Issue, and such POSition may be different from ony vIews now or hereofter epressed In this or any other Issue Janney Montgomery Scott, Inc, whICh IS registered With the SEC as on ,vestment odvisor, may give odvJCe to 115 ,vestment adVisory and othel customers Independently of ony stotements mode, Itns or ' any other ISsue Further Informahon on any secuflly mentioned herein Is available on request .