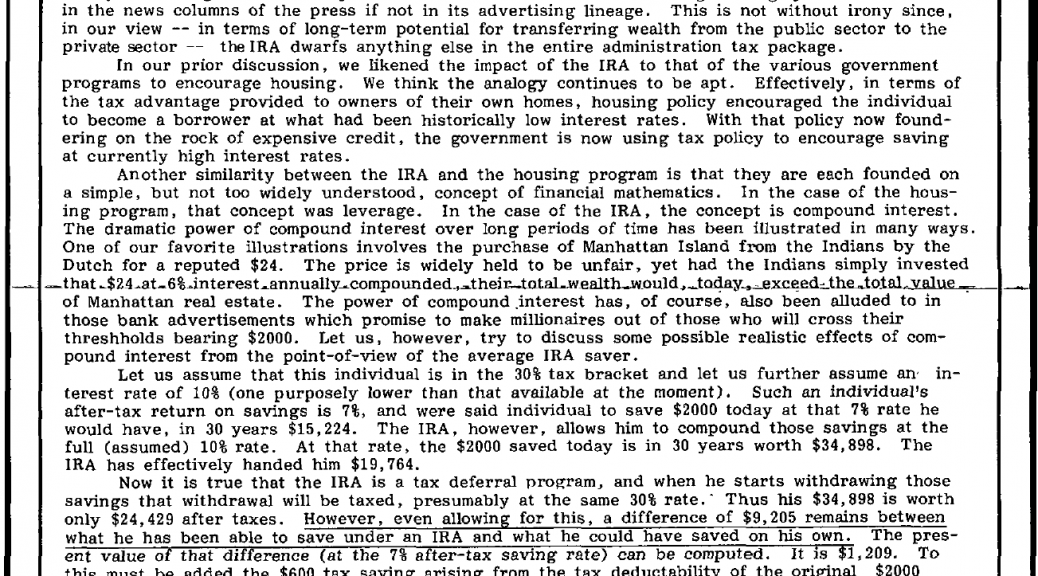 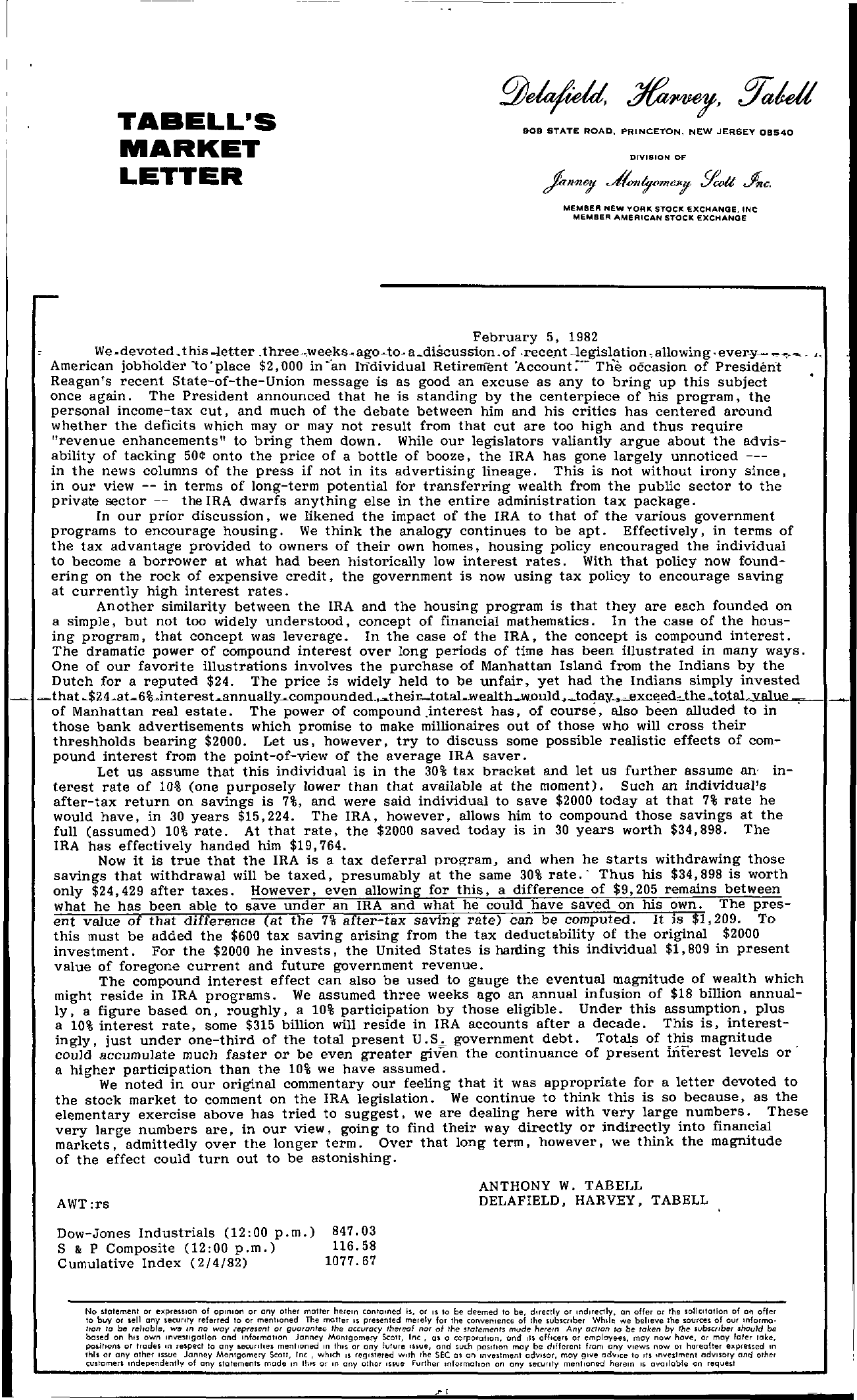 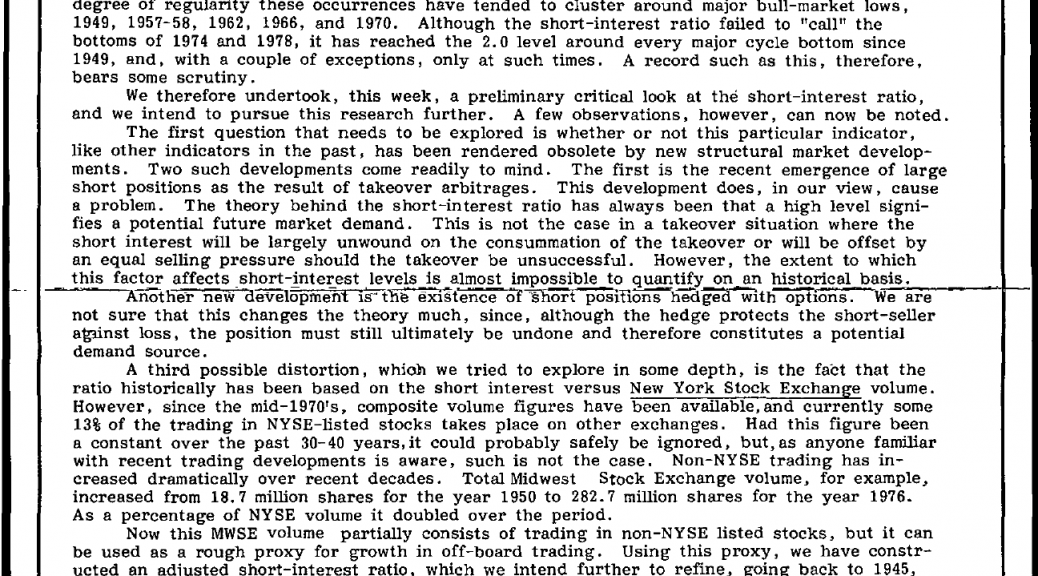 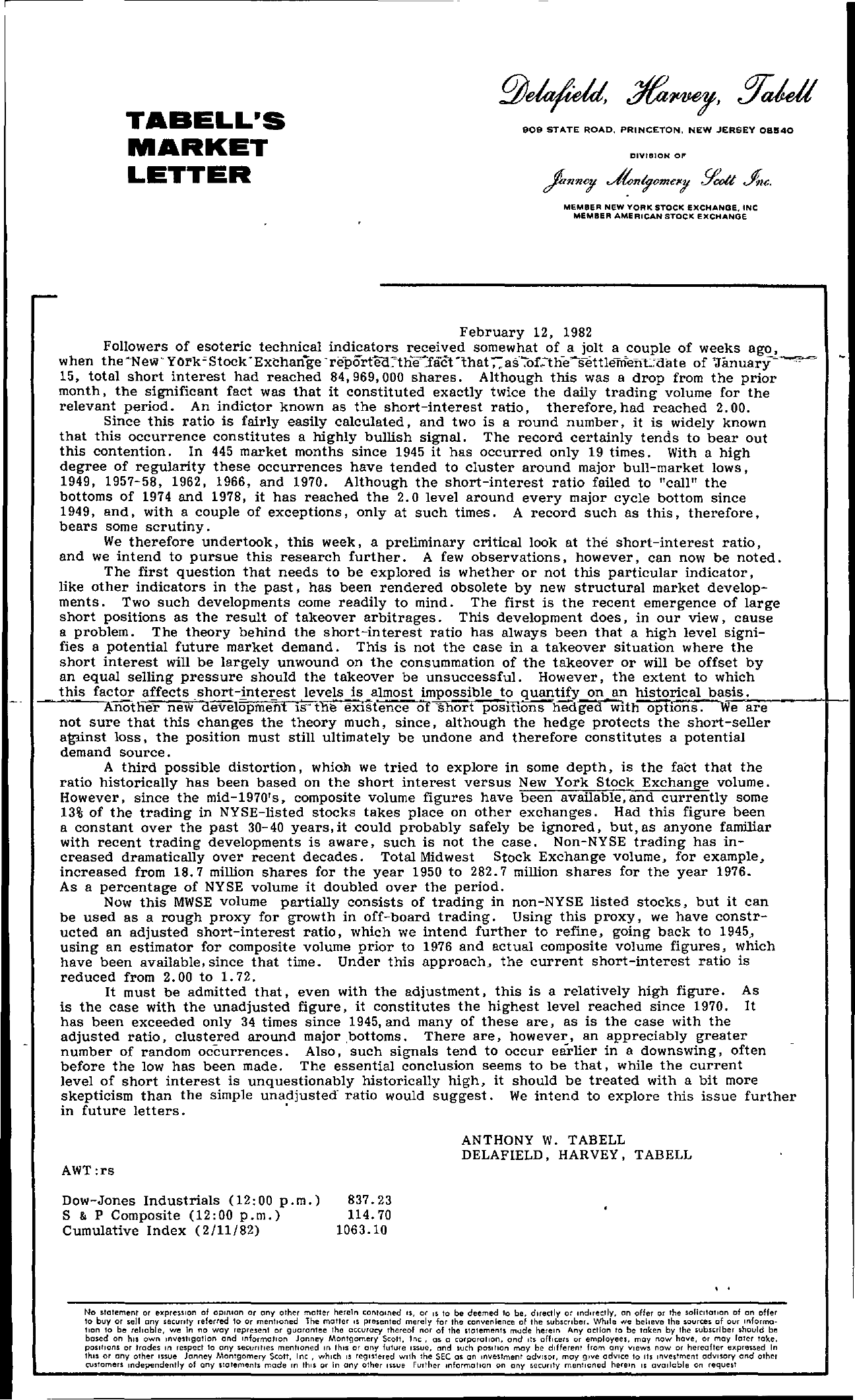 TABELL'S MARKET LETTER 909 STATE ROAD, PRINCETON, NEW JERSEY 08840 DIVISION OF MEMBER NEW YORK STOCK EXCHANOE, INC MEMBER AMERICAN STOCI( EXCHANGE – February 12, 1982 Followers of esoteric technical indicators received somewhat of a jolt a couple of weeks ago, when the New – Yark' Stock' Exchan-ge . reportea'the' .fact -that ai!,–ofthesettlemelfCdllte of danuary— 15, total short interest had reached 84,969,000 shares. Although this was a drop from the prior month, the significant fact was that it constituted exactly twice the daily trading volume for the relevant period. An indictor known as the short-interest ratio, therefore, had reached 2.00. Since this ratio is fairly easily calculated, and two is a round number, it is widely known that this occurrence constitutes a highly bullish signaL The record certainly tends to bear out this contention. In 445 market months since 1945 it has occurred only 19 times. With a high degree of regularity these occurrences have tended to cluster around major bull-market lows, 1949, 1957-58, 1962, 1966, and 1970. Although the short-interest ratio failed to call the bottoms of 1974 and 1978, it has reached the 2.0 level around every major cycle bottom since 1949, and, with a couple of exceptions, only at such times. A record such as this, therefore, bears some scrutiny. We therefore undertook, this week, a preliminary critical look at the short-interest ratio, and we intend to pursue this research further. A few observations, however, can now be noted. The first question that needs to be explored is whether or not this particular indicator, like other indicators in the past, has been rendered obsolete by new structural market develop- ments. Two such developments come readily to mind. The first is the recent emergence of large short positions as the result of takeover arbitrages. This development does, in our view, cause a problem. The theory behind the short-interest ratio has always been that a high level signi- fies a potential future market demand. This is not the case in a takeover situation where the short interest will be largely unwound on the consummation of the takeover or will be offset by an equal selling pressure should the takeover be unsuccessful. However, the extent to which this factor affects Knotlier new- sdheovretl-oipnmteernetstilehveels is almost exitence impossible to quantify on of short posiTIonsheageCl an historical With options. baWsi;s;..ea,-r-e——II—I not sure that this changes the theory much, since, although the hedge protects the short-seller agnnst loss, the position must still ultimately be undone and therefore constitutes a potential demand source. A third possible distortion, whioh we tried to explore in some depth, is the fact that the ratio historically has been based on the short interest versus New York Stock Exchange volume. However, since the mid-1970's, composite volume figures have been available, and currently some 13 of the trading in NYSE-listed stocks takes place on other exchanges. Had this figure been a constant over the past 30-40 years, it could probably safely be ignored, but, as anyone familiar with recent trading developments is aware, such is not the case. Non-NYSE trading has in- creased dramatically over recent decades. Total Midwest Stock Exchange volume, for example, increased from 18.7 million shares for the year 1950 to 282.7 million shares for the year 1976. As a percentage of NYSE volume it doubled over the period. Now this MWSE volume partially consists of trading in non-NYSE listed stocks, but it can be used as a rough proxy for growth in off-board trading. Using this proxy, we have constr- ucted an adjusted short-interest ratio, which we intend further to refine, going back to 1945, using an estimator for composite volume prior to 1976 and actual composite VOlume figures, which have been available, since that time. Under this approach, the current short-interest ratio is reduced from 2.00 to 1. 72. It must be admitted that, even with the adjustment, this is a relatively high figure. As is the case with the unadjusted figure, it constitutes the highest level reached since 1970. It has been exceeded only 34 times since 1945, and many of these are, as is the case with the adjusted ratio, clustered around major ,bottoms. There are, however., an appreciably greater number of random occurrences. Also, such signals tend to occur earlier in a downswing, often before the low has been made. The essential conclusion seems to be that, while the current level of short interest is unquestionably historically high, it should be treated with a bit more skepticism than the simple unadjusted- ratio would suggest. We intend to explore this issue further in future letters. . AWTrs ANTHONY W. TABELL DELAFIELD, HARVEY, TAB ELL Dow-Jones Industrials (1200 p.m.) 837.23 S & P Composite (1200 p.m.) 114.70 Cumulative Index (2/11/82) 1063.10 ,. No stalement or eKpreslon of opInion or Clny other molter hercln ontolned IS, or IS to be deemed 10 be, directly or indirectly, on offer or Ihe SOIiCllollon of on offer to buy or sell ony security referred 10 or mentioned The moiler IS presented merely for the convcfliencc of the subscriber. While '0 b!!lleve Ihe souroos of our Informa tlon to be reliable, we In no way represent or guarantee tho accuracy thereof nor of the 5tctements mude herem Any action to be taken by the subscriber should bl! based on hiS own mveshgatlon and Informallon Janney Montgomery Scott, Inc, as a corporation, and lIs officers or employees, may now have, or may lalcr toke, POSitions or trades In respect to any seCUrities menhoned In thiS or any future Issue, and such posilion may be different from any Views now or hereafter expressed In thiS or any other Issue Janney Montgomery Scott, Inc, which IS registered With the SEC as on Investment adVisor, may give adVICe to Its Investment adVisory and oth!!! !;UltomerS Independently of any statements made In thiS or In any other Issue Further information on any security mentioned herein IS available on request 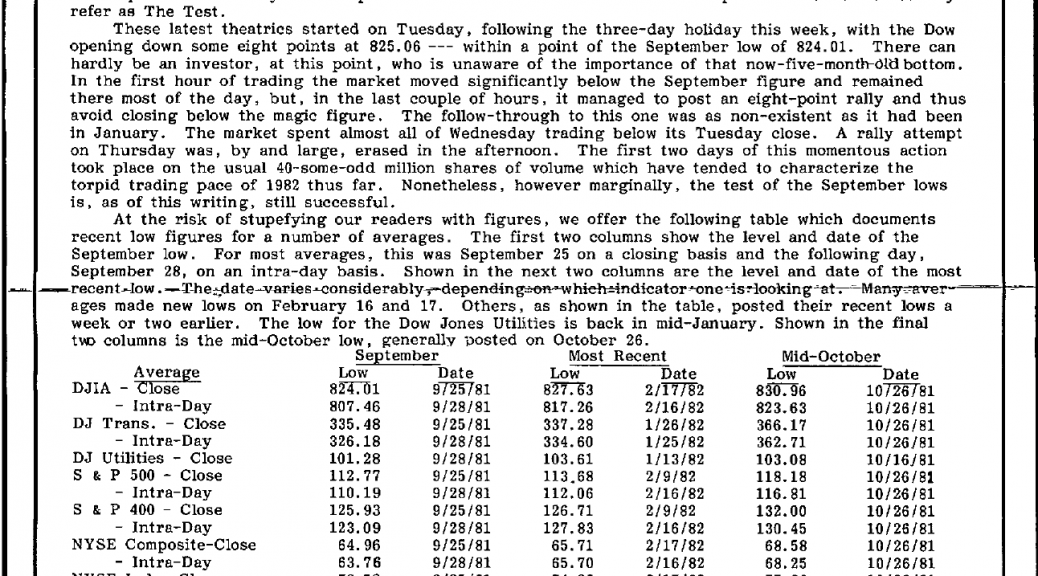 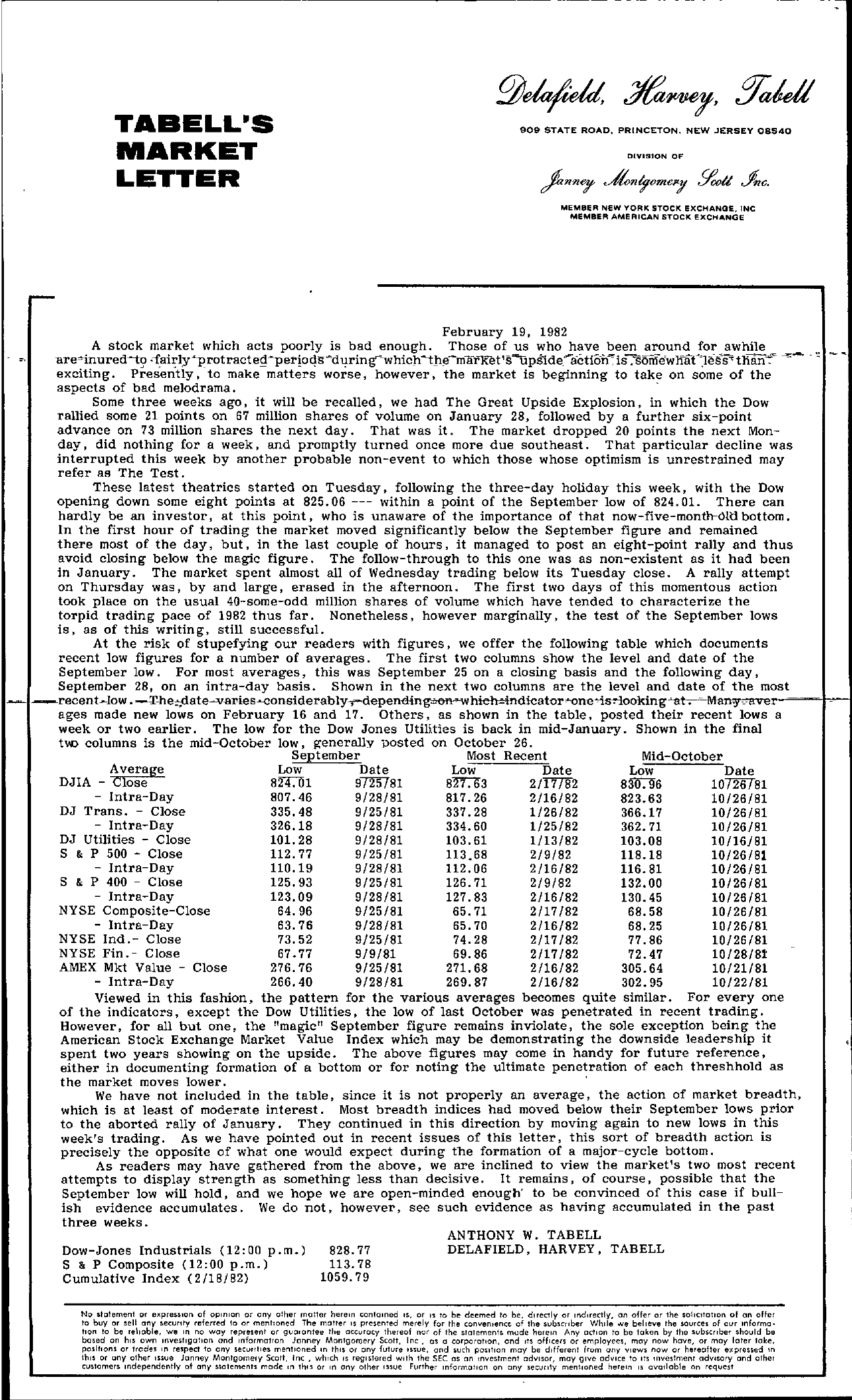 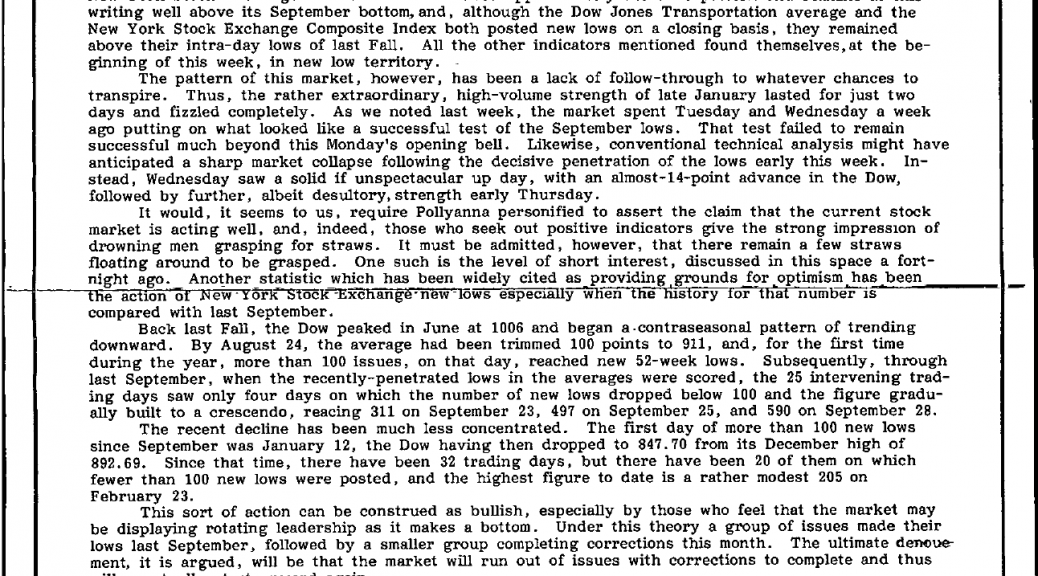 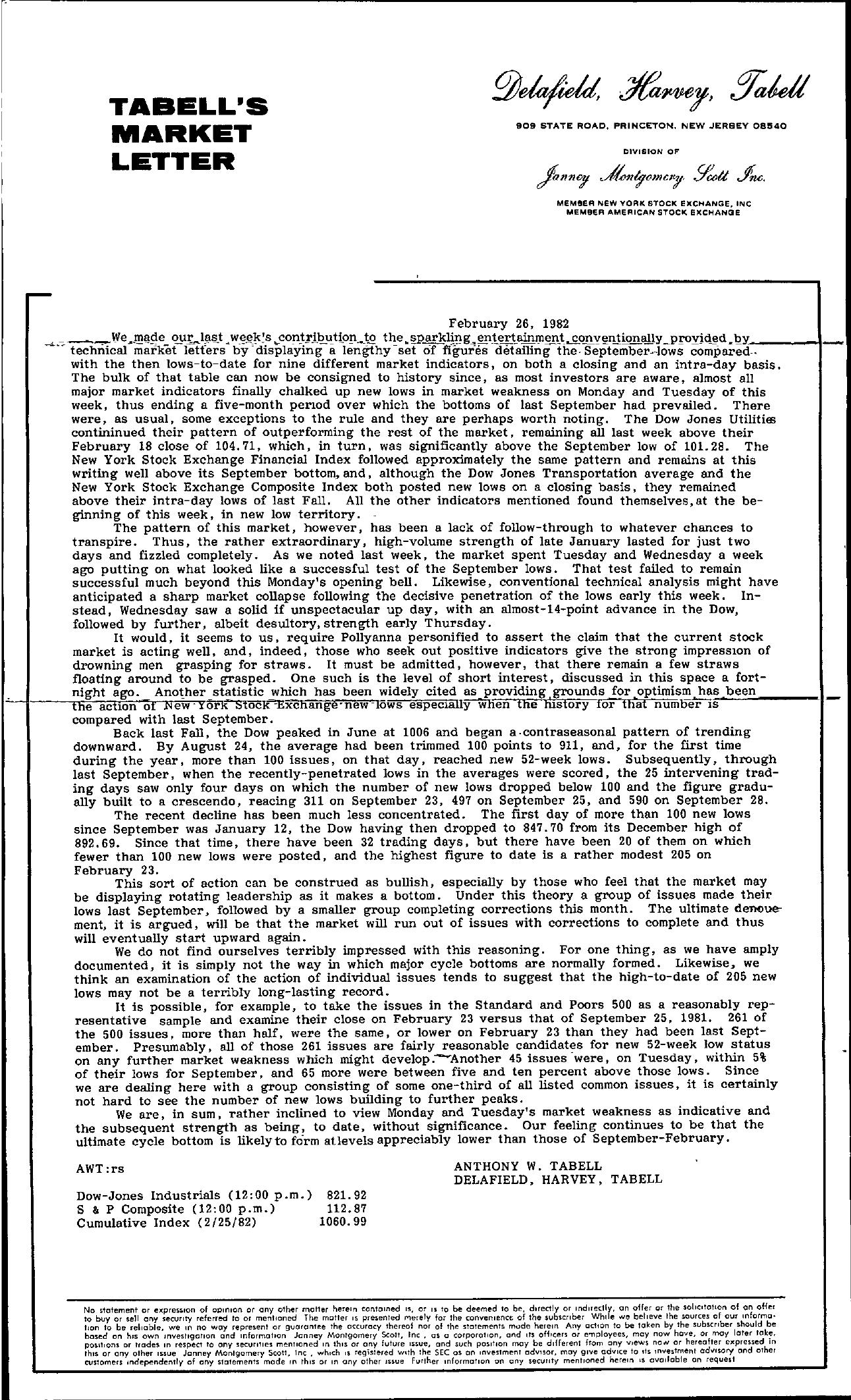