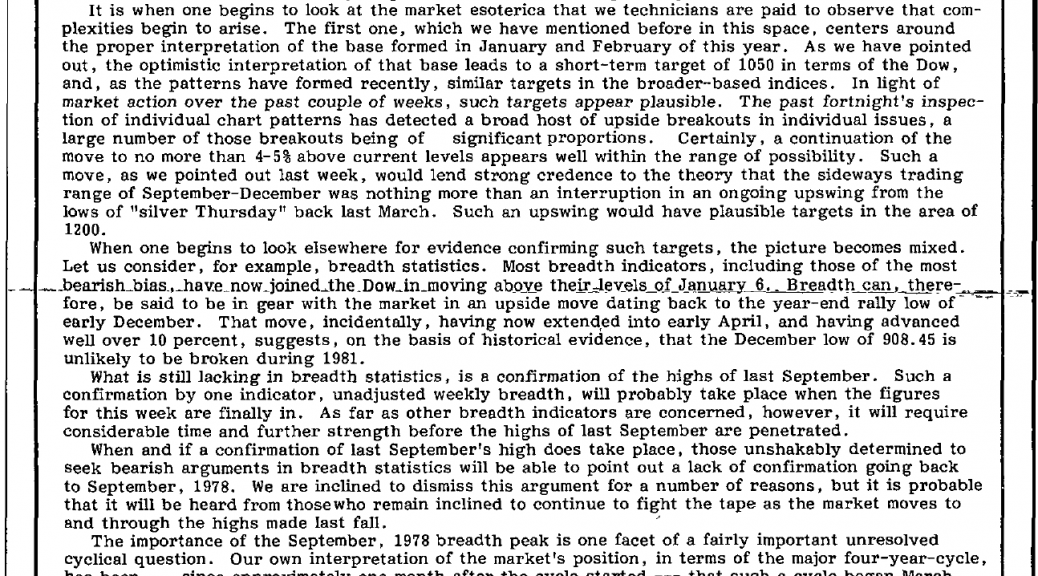 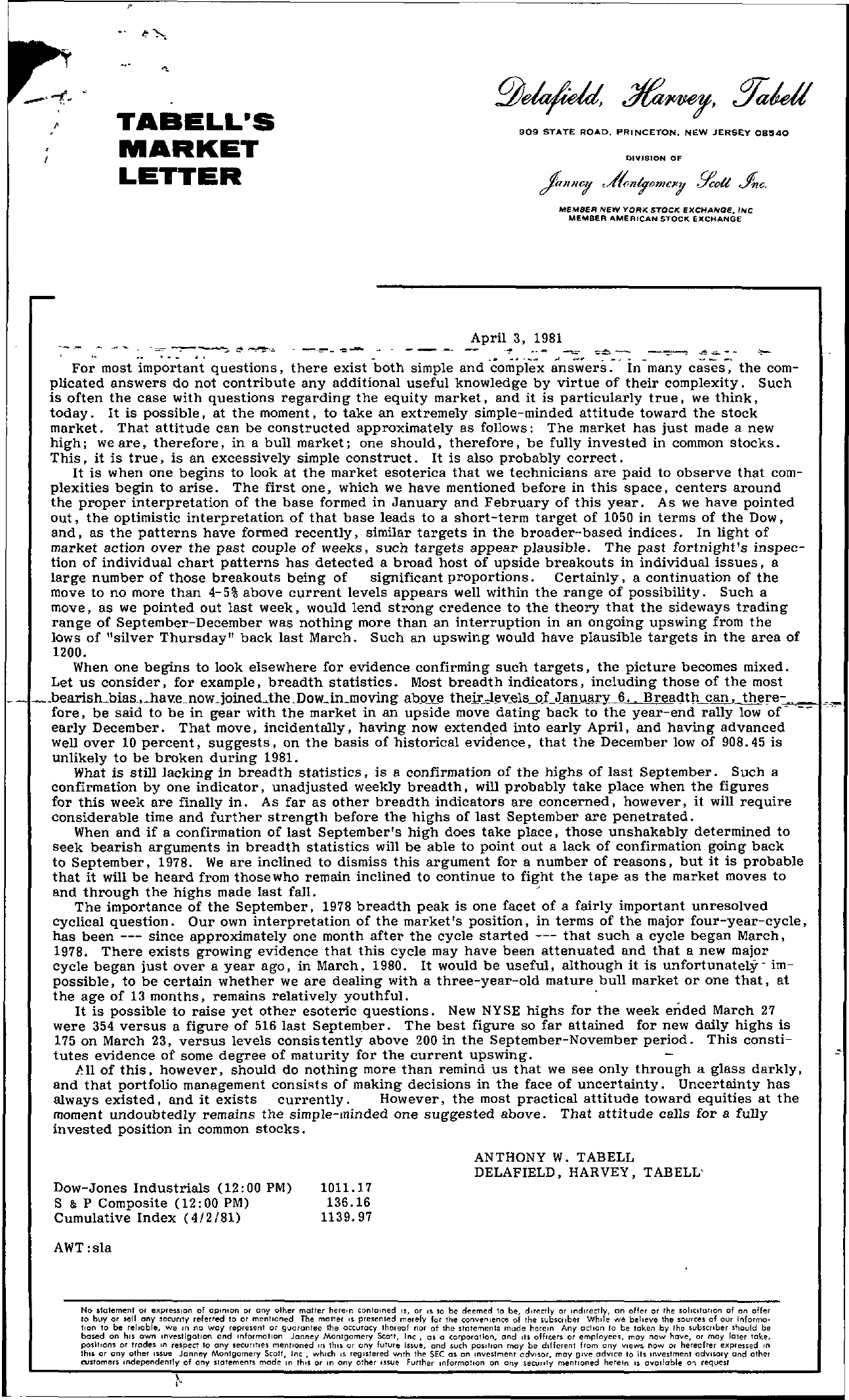 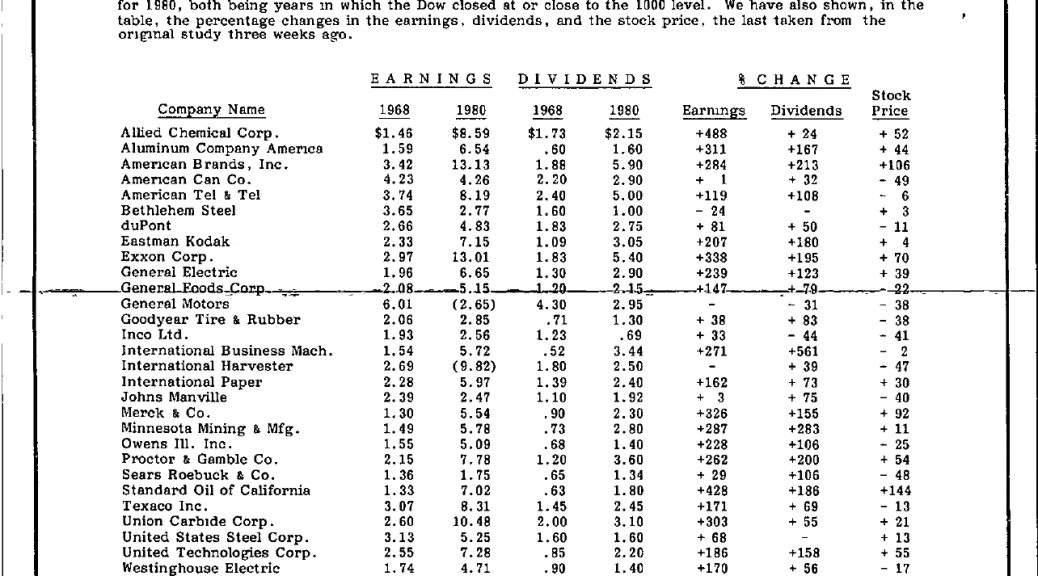 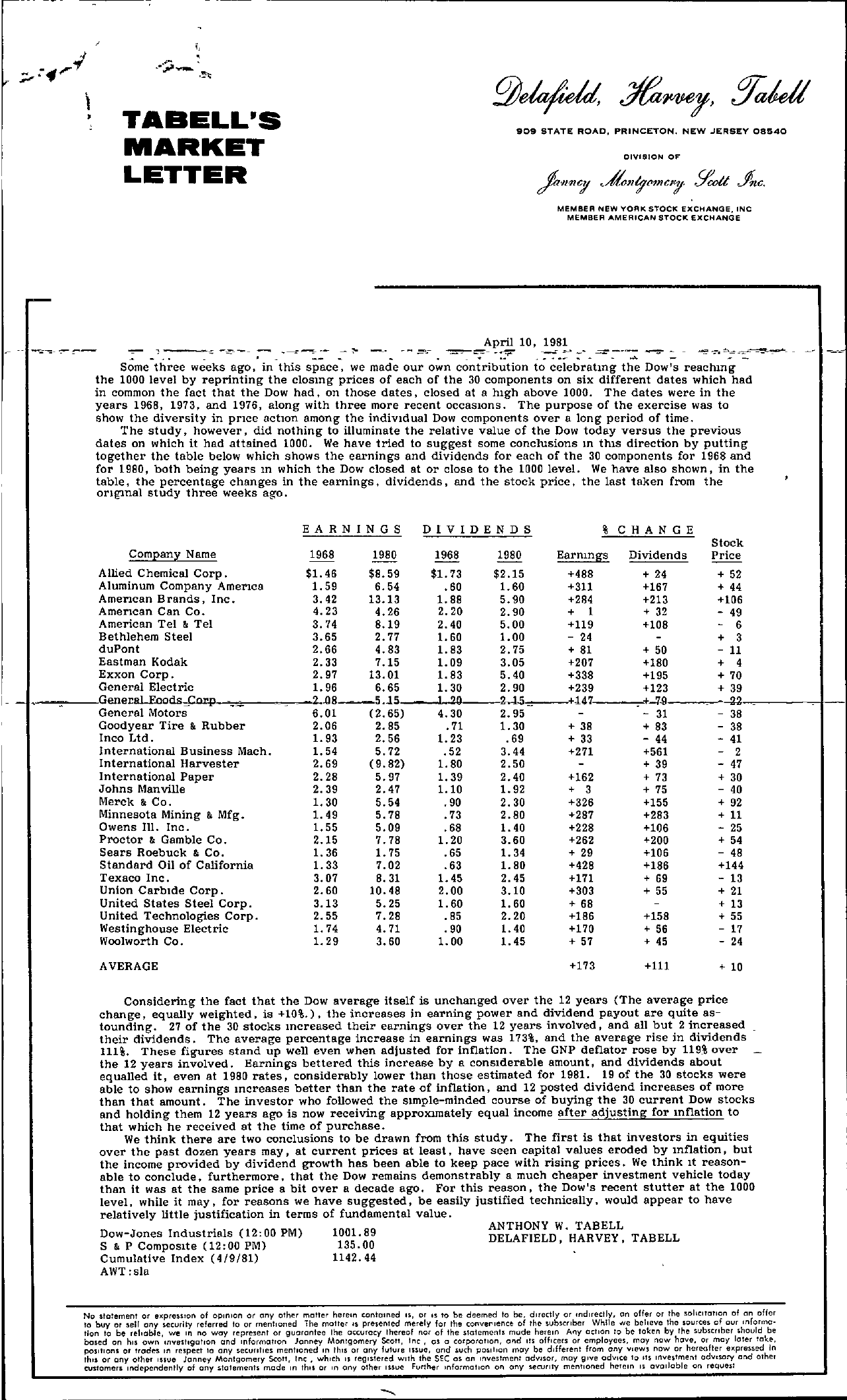 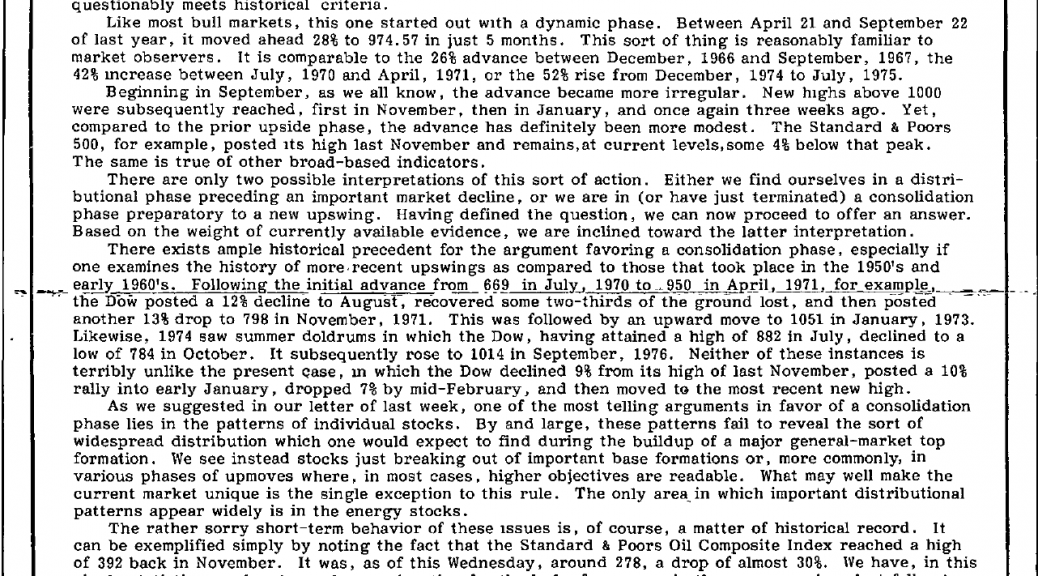 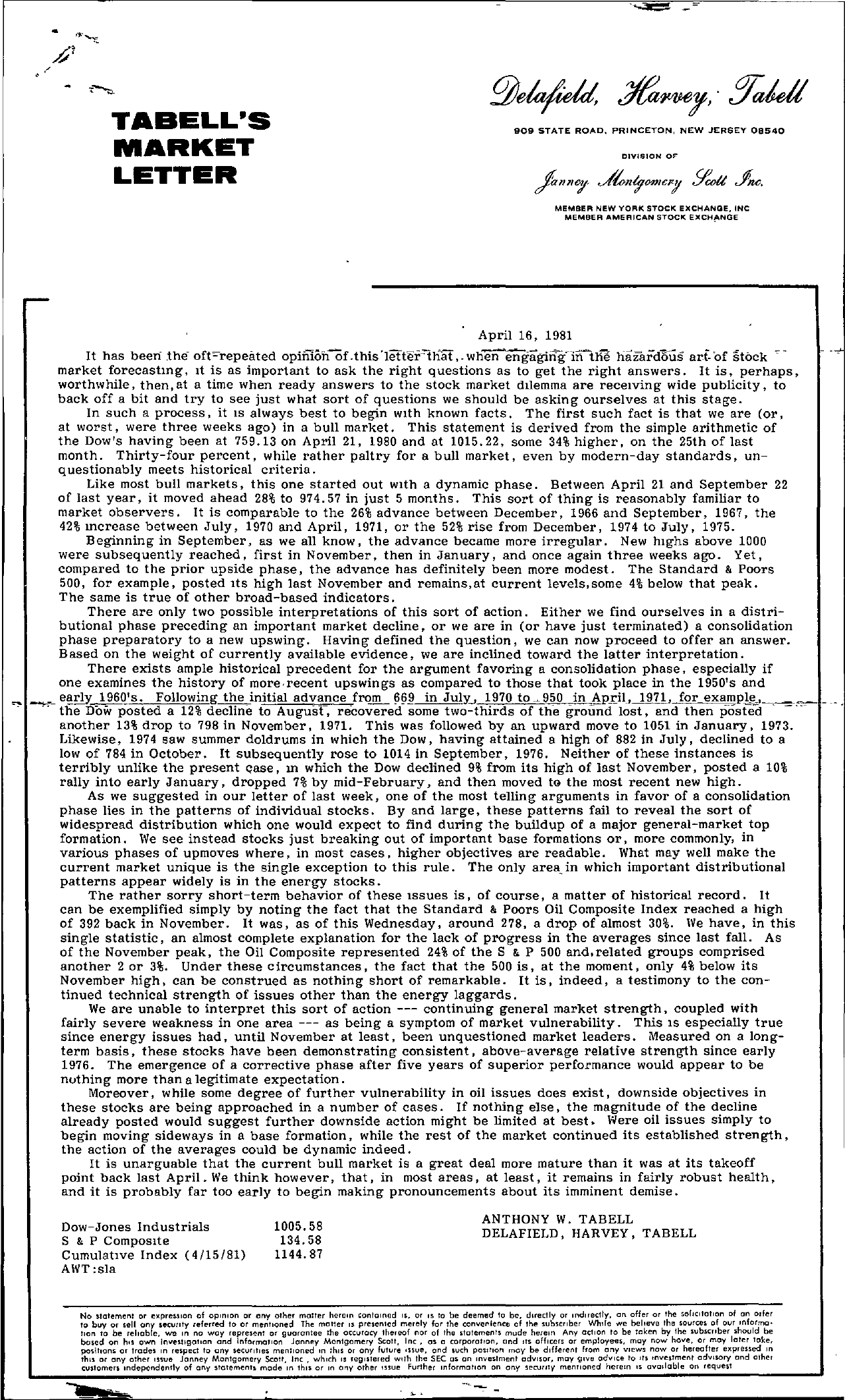 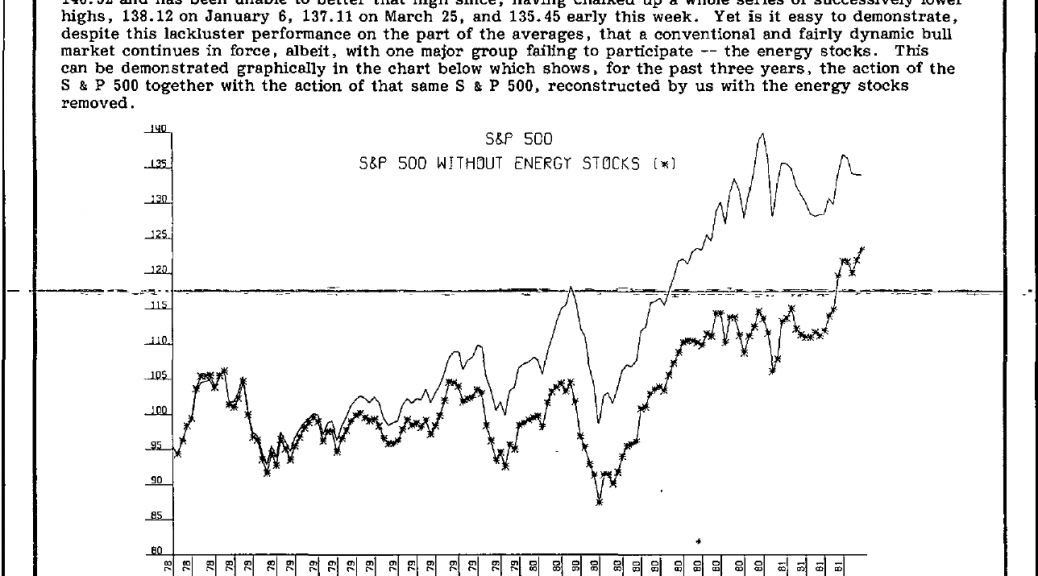 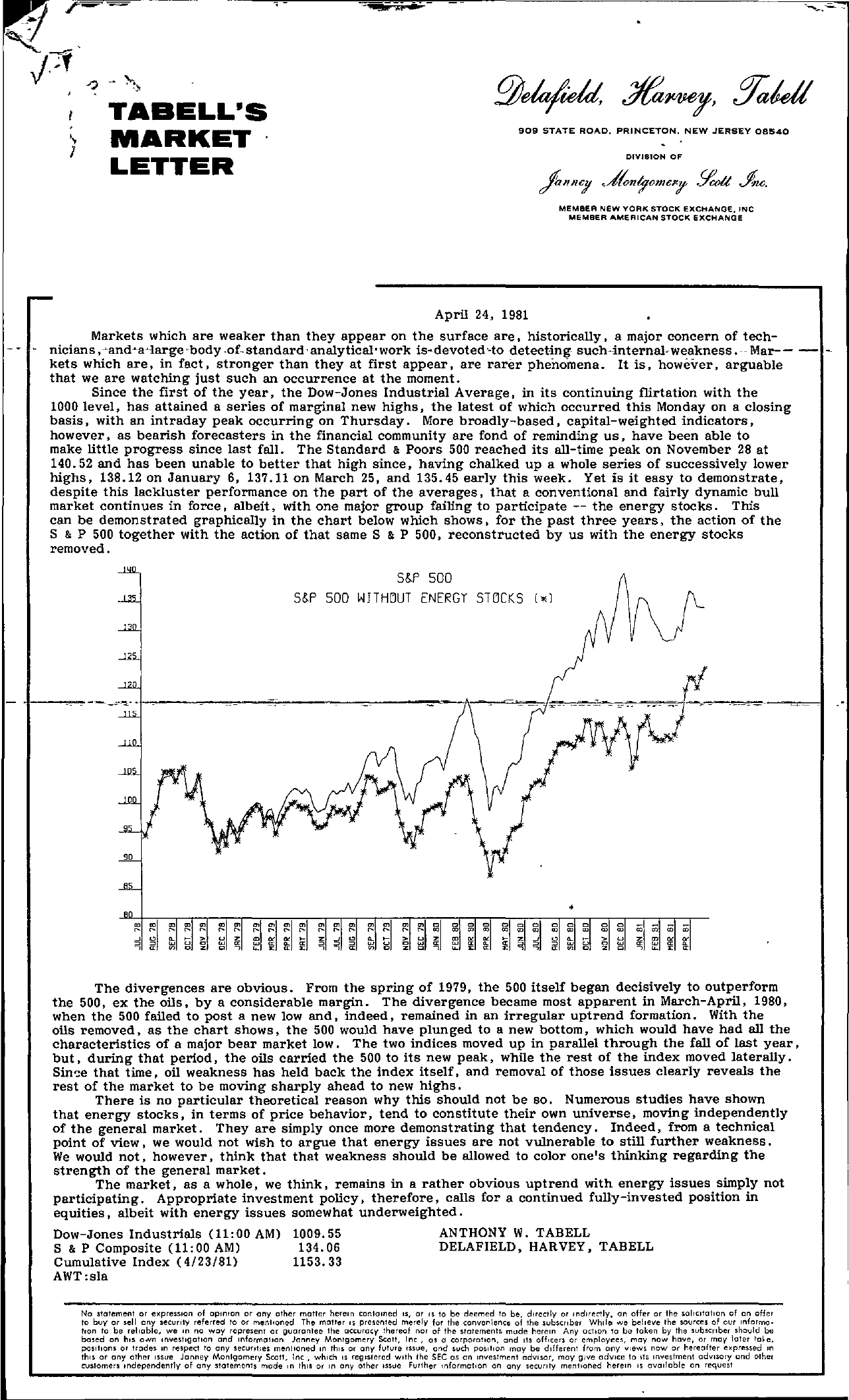 I TABELL'S MARKET 1 LETTER 909 STATE ROAD, PRINCETON. NEW JERSEY 08540 DIVISION OF MEMBER NEW YORK STOCK EXCHANGE, INC MEMBER AMERICAN STOCK EXCHANGE April 24, 1981 Markets which are weaker than they appear on the surface are, historically, a major concern of technicians ,anda1arge body -of- standard -analytical' work is-devoted –to detecting- such4nternal- weakness. — Mar- – kets which are, in fact, stronger than they at first appear, are rarer phenomena. It is, however, arguable that we are watching just such an occurrence at the moment. Since the first of the year, the Dow-Jones Industrial Average, in its continuing flirtation with the 1000 level, has attained a series of marginal new highs, the latest of which occurred this Monday on a closing basis, with an intraday peak occurring on Thursday. More broadly-based, capital-weighted indicators, however, as bearish forecasters in the financial community are fond of reminding us have been able to make little progress since last fall. The Standard & Poors 500 reached its all-time peak on November 28 at 140.52 and has been unable to better that high since, having chalked up a whole series of successively lower highs, 138.12 on January 6, 137.11 on March 25, and 135.45 early this week. Yet is it easy to demonstrate, despite this lackluster performance on the part of the averages, that a conventional and fairly dynamic bull market continues in force, albeit, with one major group failing to participate — the energy stocks. This can be demonstrated graphically in the chart below which shows, for the past three years, the action of the S & P 500 together with the action of that same S & P 500, reconstructed by us with the energy stocks removed. S&F 500 S&P 500 WITHOUT ENERGY STOCKS J The divergences are obvious. From the spring of 1979, the 500 itself began decisively to outperform the 500, ex the oils, by a considerable margin. The divergence became most apparent in March-April, 1980, when the 500 failed to post a new low and, indeed, remained in an irregular uptrend formation. With the oils removed, as the chart shows, the 500 would have plunged to a new bottom, which would have had all the characteristics of a major bear market low. The two indices moved up in parallel through the fall of last year, but, during that period, the oils carried the 500 to its new peak, while the rest of the index moved laterally. Sine that time, oil weakness has held back the index itself, and removal of those issues clearly reveals the rest of the market to be moving sharply ahead to new highs. There is no particular theoretical reason why this should not be so. Numerous studies have shown that energy stocks, in terms of price behavior, tend to constitute their own universe, moving independently of the general market. They are simply once more demonstrating that tendency. Indeed, from a technical point of view, we would not wish to argue that energy issues are not vulnerable to still further weakness. We would not, however, think that that weakness should be allowed to color one's thinking regarding the strength of the general market. The market, as a whole, we think J remains in a rather obvious uptrend with energy issues simply not participating. Appropriate investment policy, therefore, calls for a continued fully-invested position in equities, albeit with energy issues somewhat underweighted. Dow-Jones Industrials (1100 AM) 1009.55 S & P Composite (1100 AM) 134.06 Cumulative Index (4/23/81) 1153.33 AWTsla ANTHONY W. TABELL DELAFIELD, HARVEY, TABELL No statement or expression of opinion or any other motler herein contained IS, or IS to be deemed to be, directly or mdlrec1ly. on offer or the soliCitation of on offer to buy or sell any security referred to or menhoned The moiler I presC!nled merely for the converlcnce of Ihe subscriber Whde we believe the 5Qurces of our Informa han to be reliable, we In no way represent or guarantee the accuracy thereof nor of the statements mude herein Any action to be token by the subSCriber should be based on hiS aNn inVestigation and Informatton Janney Montgomery Scott, Inc, as a corporation, and Ils officers or employees, may now have, or may later loe, pOSItions or trodes In respec1 10 ony seCufltles menlloned ItI thiS or any future Issue, and such pOltlon may be different from any views now ar hereafter expressed In thl or any other Issue Janney Montgomery Scott, Inc, whICh I rcglstt!rcd With the SEC as on Investment adVisor, may give adVice to Its Investment odvlsory and othel customers independenTly of any statements mode ItI Ihls or In any other Issue Further Information on any security mentioned herem IS available on request