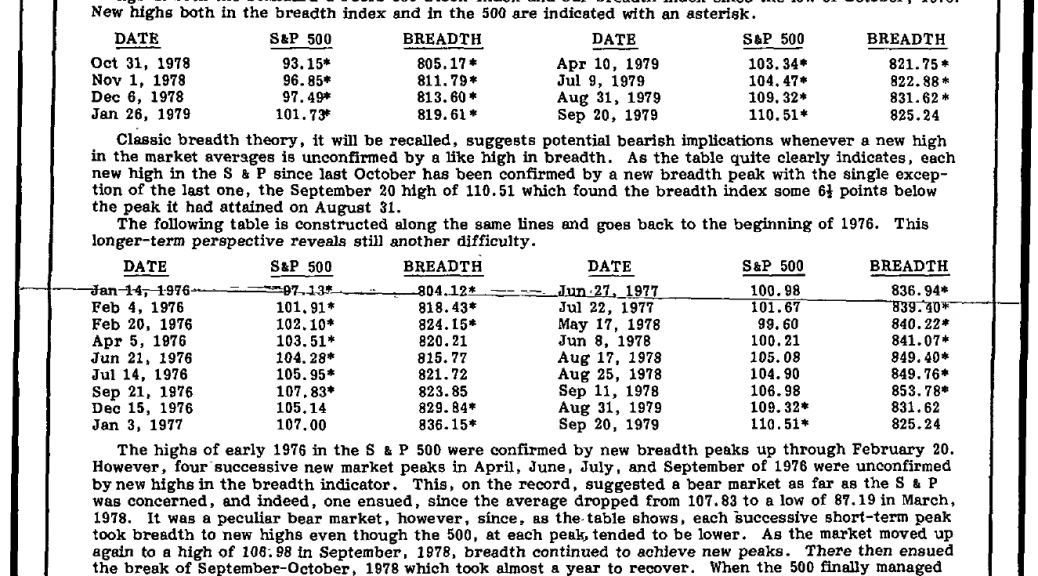 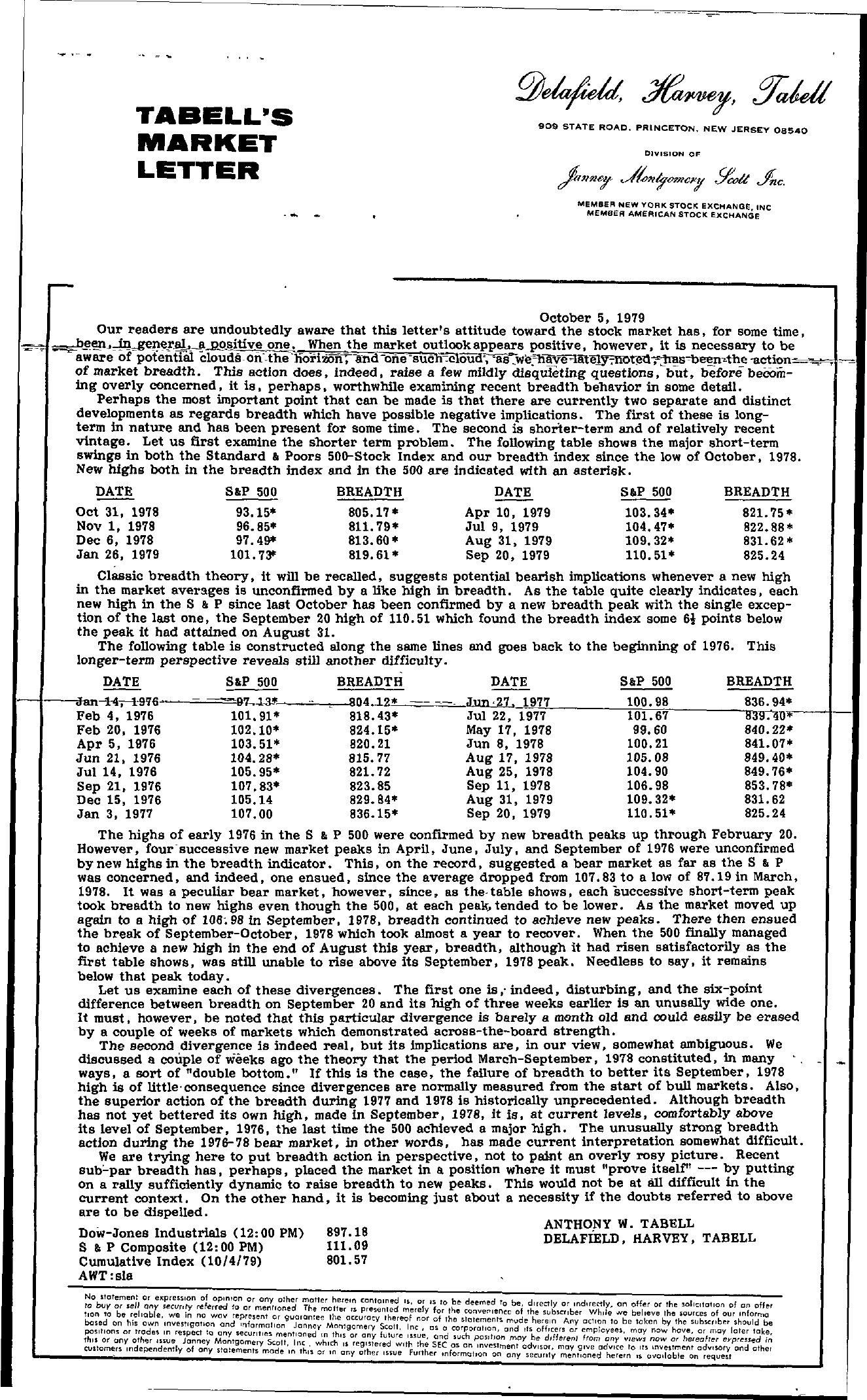 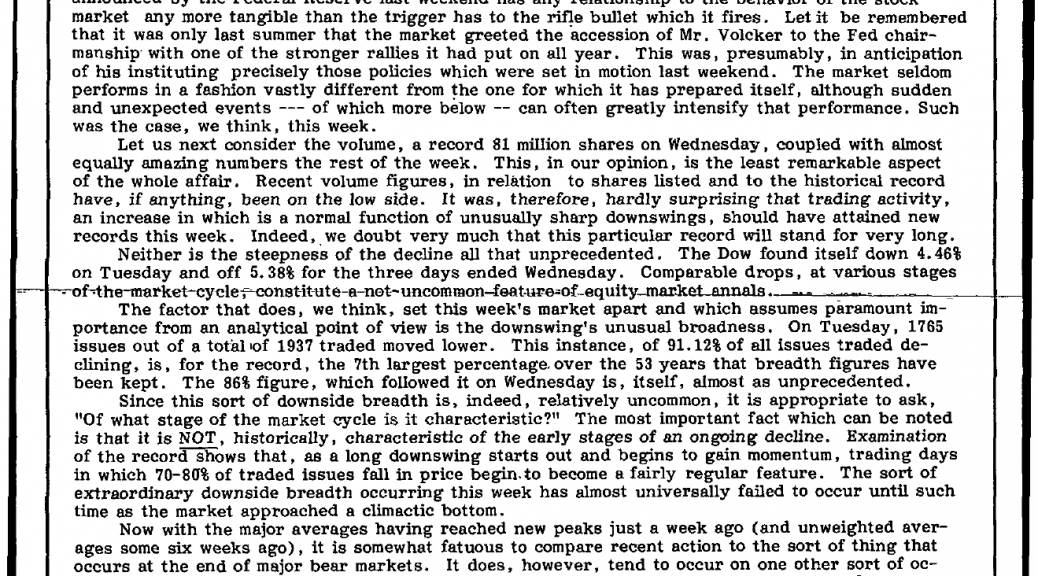 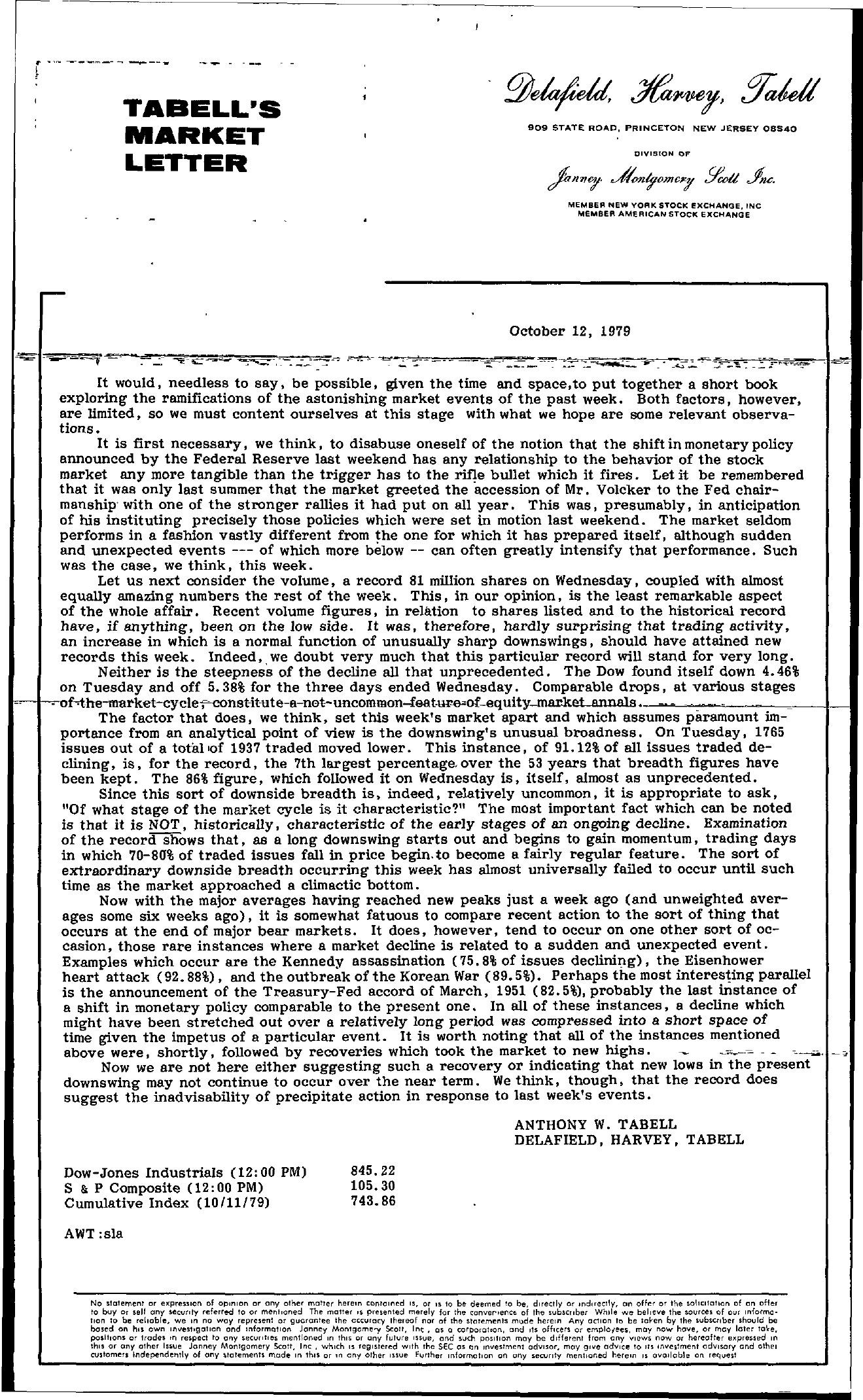 ,— ,. …. ! —- TABELL'S MARKET LETTER 909 STATE ROAD, PRINCETON NEW JERSEY 08S40 DIVISION OF MEMBER NEW VOAK STOCI( EXCHANGE, INC MEMBER AMERICAN STOCK EXCHANGE October 12, 1979 It would, needless to say, be possible, given the time and space,to put together a short book exploring the ramifications of the astonishing market events of the past week. Both factors, however, are limited, so we must content ourselves at this stage with what we hope are some relevant observations. It is first necessary, we think, to disabuse oneself of the notion that the shift in monetary policy announced by the Federal Reserve last weekend has any relationship to the behavior of the stock market any more tangible than the trigger has to the rifle bullet which it fires. Let it be remembered that it was only last summer that the market greeted the accession of Mr. Volcker to the Fed chairmanship' with one of the stronger rallies it had put on all year. This was, presumably, in anticipation of his instituting precisely those policies which were set in motion last weekend. The market seldom performs in a faShion vastly different from one for which it has prepared itself, although sudden and unexpected events — of which more below — can often greatly intensify that performance. Such was the case, we think, this week. Let us next consider the volume, a record 81 million shares on Wednesday, coupled with almost equally amazing numbers the rest of the week. This, in our opinion, is the least remarkable aspect of the whole affair. Recent volume figures, in relation to shares listed and to the historical record have, if anything, been on the low side. It was, therefore, hardly surprising that trading activity, an increase in which is a normal function of unusually sharp downswings, should have attained new records this week. Indeed we doubt very much that this particular record will stand for very long. Neither is the steepness of the decline all that unprecedented. The Dow found itself down 4.46 on Tuesday and off 5.38 for the three days ended Wednesday. Comparable drops, at various stages The factor that does, we think, set this week's market apart and which assumes paramount im- portance from an analytical point of view is the downswing's unusual broadness. On Tuesday, 1765 issues out of a total 'of 1937 traded moved lower. This instance, of 91.12 of all issues traded de- clining, is, for the record, the 7th largest percentage, over the 53 years that breadth figures have been kept. The 86 figure, which followed it on Wednesday is, itself, almost as unprecedented. Since this sort of downside breadth is, indeed, relatively uncommon, it is appropriate to ask, Of what stage of the market cycle is it characteristic The most important fact which can be noted is that it is NOT, historically, characteristic of the early stages of an ongoing decline. Examination of the record shows that, as a long downswing starts out and begins to gain momentum, trading days in which 70-8(1 of traded issues fall in price begin, to become a fairly regular feature. The sort of extraordinary downside breadth occurring this week has almost universally failed to occur until such time as the market approached a climactic bottom. Now with the major averages having reached new peaks just a week ago (and unweighted aver- ages some six weeks ago), it is somewhat fatuous to compare recent action to the sort of thing that occurs at the end of major bear markets. It does, however, tend to occur on one other sort of oc- casion, those rare instances where a market decline is related to a sudden and unexpected event. Examples which occur are the Kennedy assassination (75.8 of issues declining), the Eisenhower heart attack (92.88), and the outbreak of the Korean War (89.5). Perhaps the most parallel is the announcement of the Treasury-Fed accord of March, 1951 (82.5), probably the last instance of a shift in monetary policy comparable to the present one. In all of these instances, a decline which might have been stretched out over a relatively long period was compressed into a short space of time given the impetus of a particular event. It is worth noting that all of the instances mentioned above were, shortly, followed by recoveries which took the market to new highs. – – ——–. Now we are not here either suggesting such a recovery or indicating that new lows in the present downswing may not continue to occur over the near term. We think, though, that the record does suggest the inadvisability of precipitate action in response to last week's events. ANTHONY W. TABELL DELAFIELD, HARVEY, TABELL Dow-Jones Industrials (12 00 PM) S & P Composite (1200 PM) Cumulative Index (10/11/79) 845.22 105.30 743.86 AWT sla No statement or expression of opInion or any other mattcr herein Contained IS, or IS to be deemed to be, dIrectly or mdlrectly, on offer or the solICItation of on offer to buy or self any sewflty referred to or mentioned The matter IS presented merely for Ihe canverlencEo of the subsctlber While we believe the sources of our II'1formo- tlon to be reliable, we ,n no way represent or guarantee the accuracy thereof nor of the statements mude herein Any action to be tal-en by the subscnber should be based on h own Ifwesligolion and 1I'110rmCllion Janney Monlgome-y Scoll, Int , os 0 corporation, ond lIs officers or emplo(ees, may now hove, or may laler loire. positions or trades 'n respect to any seCUfilies menlloned In thiS or any future Issue, and such position may be different from any views now or hereafter expressed In thIS or any other Issue Janney Montgomery Scott, Inc, which IS registered wllh the SEC as on Investment adVisor, may glye adVice to ItS InYcstment adVisory and olhel customers Independently 01 any statements mode 11'1 thIS or 11'1 any olher Issue Further II'1formohon on any secvflly menhoned herein IS aVailable on request 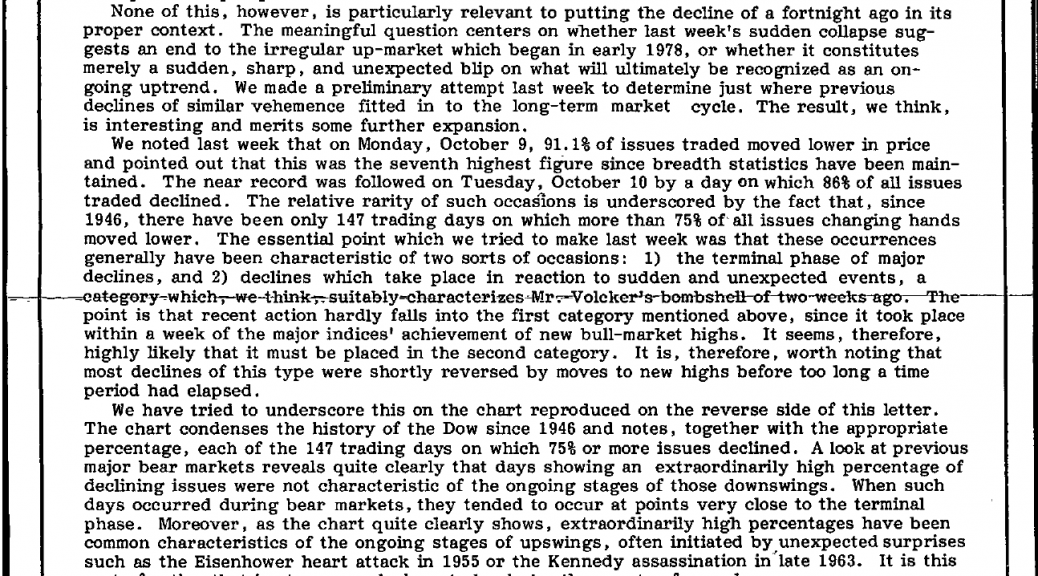 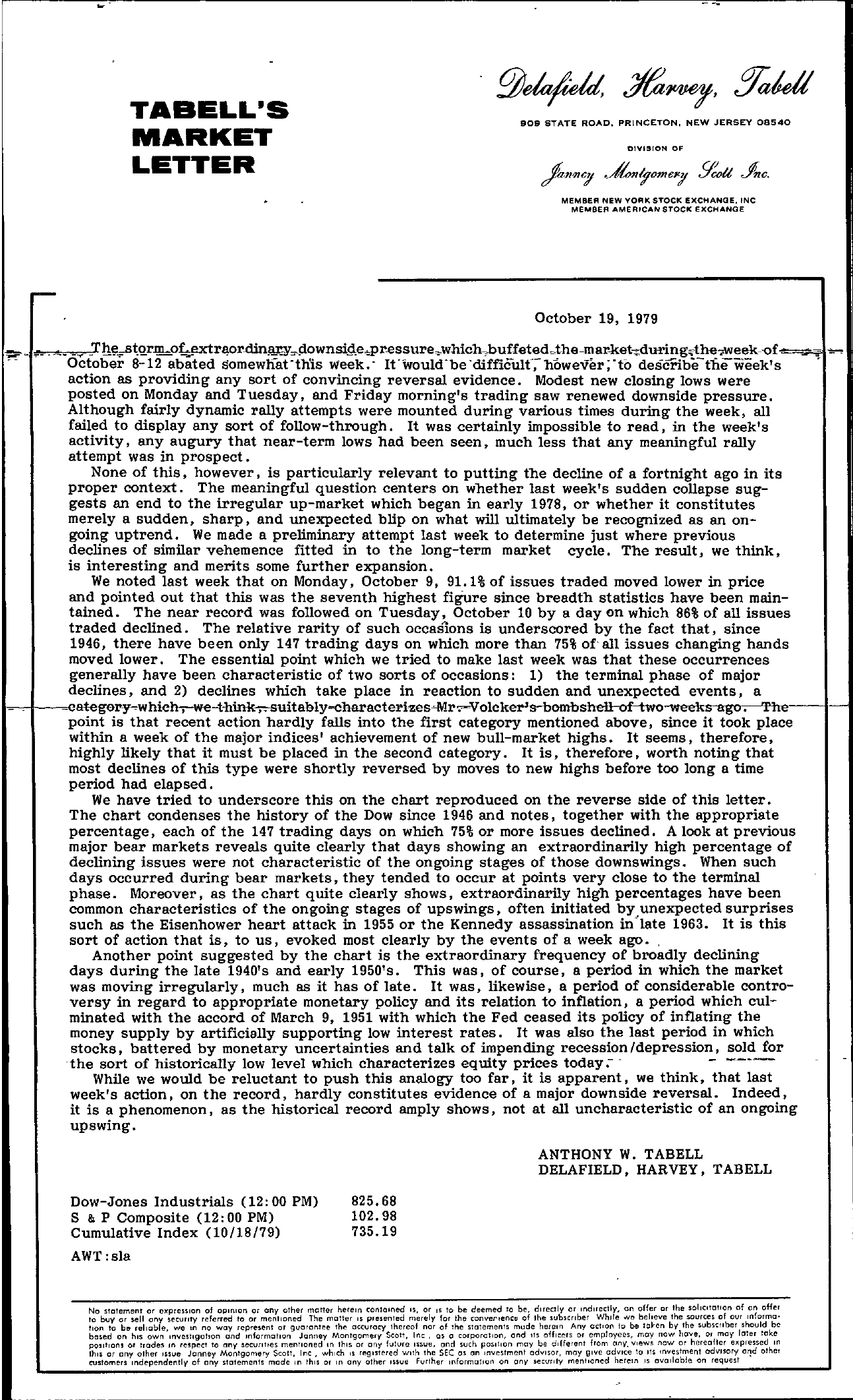 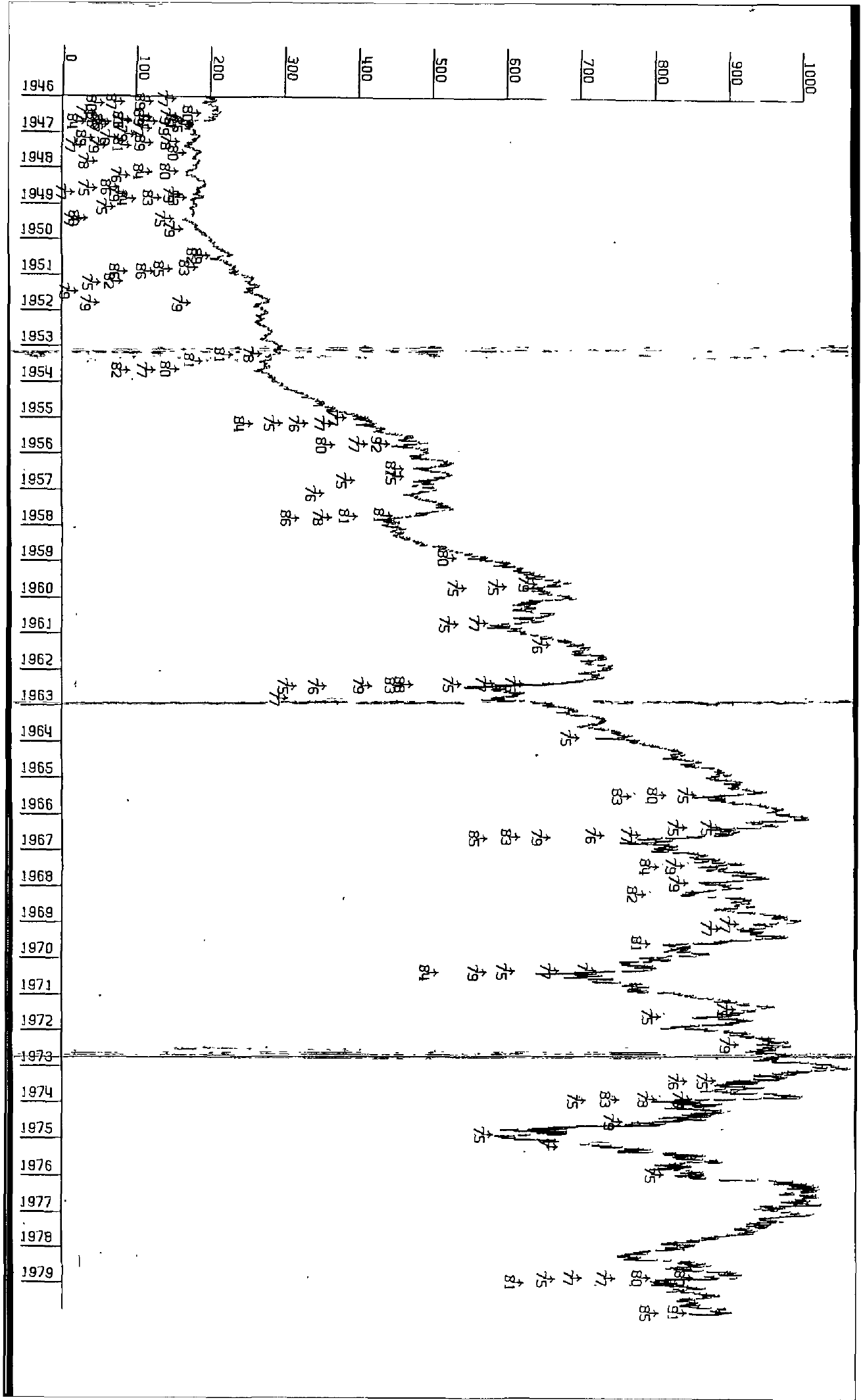 TABELL'S MARKET LETTER 906 STATE ROAD, PRINCETON, NEW JERSEY 08540 DIVISION OF MEMBEfl NEW VOAK STOCK EXCHANGE, INC MEMBER AMERICAN STOCK EXCHANGE October 19. 1979 , . October 8-12 abated somewlfat-th'is week. – It -would-be -difficulf; however; 'to desCribe-theweek's – action as providing any sort of convincing reversal evidence. Modest new closing lows were posted on Monday and Tuesday, and Friday morning's trading saw renewed downside pressure. Although fairly dynamic rally attempts were mounted during various times during the week, all failed to display any sort of follow-through. It was certainly impossible to read, in the week's activity, any augury that near-term lows had been seen, much less that any meaningful rally attempt was in prospect. None of this, however, is particularly relevant to putting the decline of a fortnight ago in its proper context. The meaningful question centers on whether last week's sudden collapse sug- gests an end to the irregular up-market which began in early 1978, or whether it constitutes merely a sudden, sharp, and unexpected blip on what will ultimately be recognized as an on- going uptrend. We made a preliminary attempt last week to determine just where previous declines of similar vehemence fitted in to the long-term market cycle. The result, we think, is interesting and merits some further expansion. We noted last week that on Monday, October 9, 91.1 of issues traded moved lower in price and pointed out that this was the seventh highest figure since breadth statistics have been main- tained. The near record was followed on Tuesday, October 10 by a day on which 86 of all issues traded declined. The relative rarity of such occaSIons is underscored by the fact that, since 1946, there have been only 147 trading days on which more than 75 of-all issues changing hands moved lower. The essential point which we tried to make last week was that these occurrences generally have been characteristic of two sorts of occasions 1) the terminal phase of major declines, and 2) declines which take place in reaction to sudden and unexpected events, a of two-weeks–ago. 'l'-hel—I– point is that recent action hardly falls into the first category mentioned above, since it took place within a week of the major indices' achievement of new buH-market highs. It seems, therefore, highly likely that it must be placed in the second category. It is, therefore, worth noting that most declines of this type were shortly reversed by moves to new highs before too long a time period had elapsed. We have tried to underscore this on the chart reproduced on the reverse side of this letter. The chart condenses the history of the Dow since 1946 and notes, together with the appropriate percentage, each of the 147 trading days on which 75 or more issues declined. A look at previous major bear markets reveals quite clearly that days showing an extraordinarily high percentage of declining issues were not characteristic of the ongoing stages of those downswings. When such days occurred during bear markets, they tended to occur at points very close to the terminal phase. Moreover, as the chart quite clearly shows, extraordinarily high percentages have been common characteristics of the ongoing stages of upswings, often initiated by.unexpected surprises such as the Eisenhower heart attack in 1955 or the Kennedy assassination in-late 1963. It is this sort of action that is, to us, evoked most clearly by the events of a week ago .. Another point suggested by the chart is the extraordinary frequency of broadly declining days during the late 1940's and early 1950's. This was, of course, a period in which the market was moving irregularly, much as it has of late. It was, likewise, a period of considerable contro- versy in regard to appropriate monetary policy and its relation to inflation, a period which cul- minated with the accord of March 9, 1951 with which the Fed ceased its policy of inflating the money supply by artificially supporting low interest rates. It was also the last period in which stocks. battered by monetary uncertainties and talk of impending recession /depression. sold for -the sort of historically low level which characterizes equity prices today.- – – —- While we would be reluctant to push this analogy too far. it is apparent. we think. that last week's action, on the record, hardly constitutes evidence of a major downside reversal. Indeed. it is a phenomenon. as the historical record amply shows. not at all uncharacteristic of an ongoing upswing. ANTHONY W. TABELL DELAFIELD. HARVEY. TAB ELL Dow-Jones Industrials (12 00 PM) S & P Composite (12 00 PM) Cumulative Index (10/18/79) AWTsla 825.68 102.98 735.19 No statement or expression of opinion or any other matter herein contained IS, or ,s to be deemed to be, clrcdly or mdlrectly. on offer or the sol,cltollon of on offer to buy or sell ony security referred to or mentIOned The molter 15 presented merely for Ihe of the subscrIber While we beheve the sources of our Informo flon to be relloble we In no woy represent or guarantee Ihe occurocy !hereof nor of the stotements mude hereIn Any actIon to be by the subSCriber should be based on hIS own',nvest,gotlon and Informotlon Jonney Montgomery Scott, Inc, as a corporotlon, and Its off,cers or employees, may now have, or moy loler toke posItIons or trades In respect to ony secufliles mentIoned In thIS or any future Issue, ond such posItIon may be dIfferent from ony. vIews now or hereafter elpressed In thIS or any other Issue Janney Montgomery Scott, Inc, whICh IS regIstered WIth the SEC as on Investment adVIsor, moy gIve adVICe to Its Investment adVisory a,!d other customers Independently of any stotements mode In thIS or In any other Issue Further Informotlon on any securlly mentIoned hereIn IS ova liable on request ' I..u ' I 01 '' 1955 1956 1957 1958 1959 1960 1961 )965 )96-7 1968 1970 1971 1972 1974 1975 1976 1977 1978 1979 – – –r 1- . —-….J