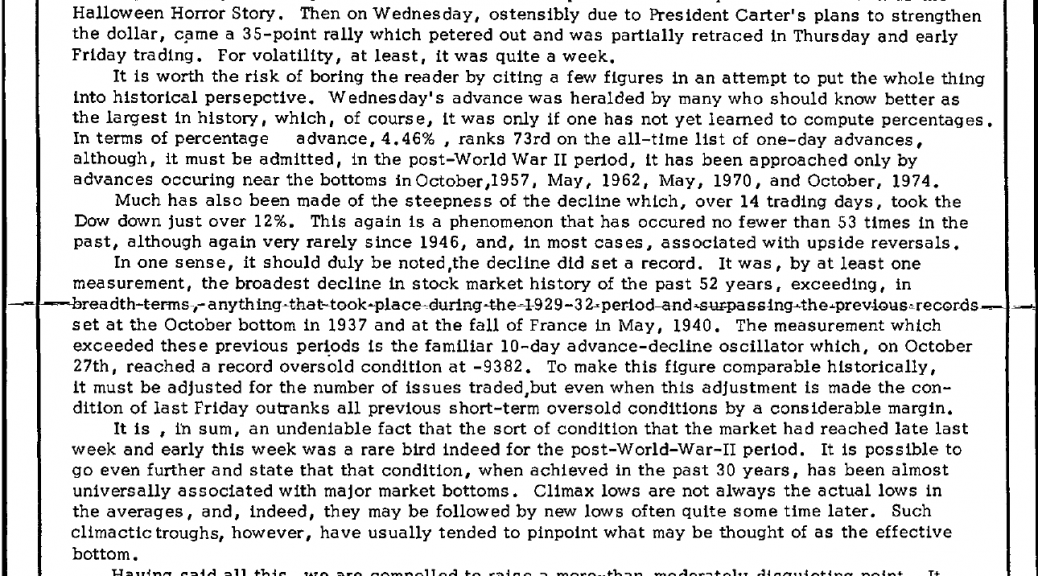 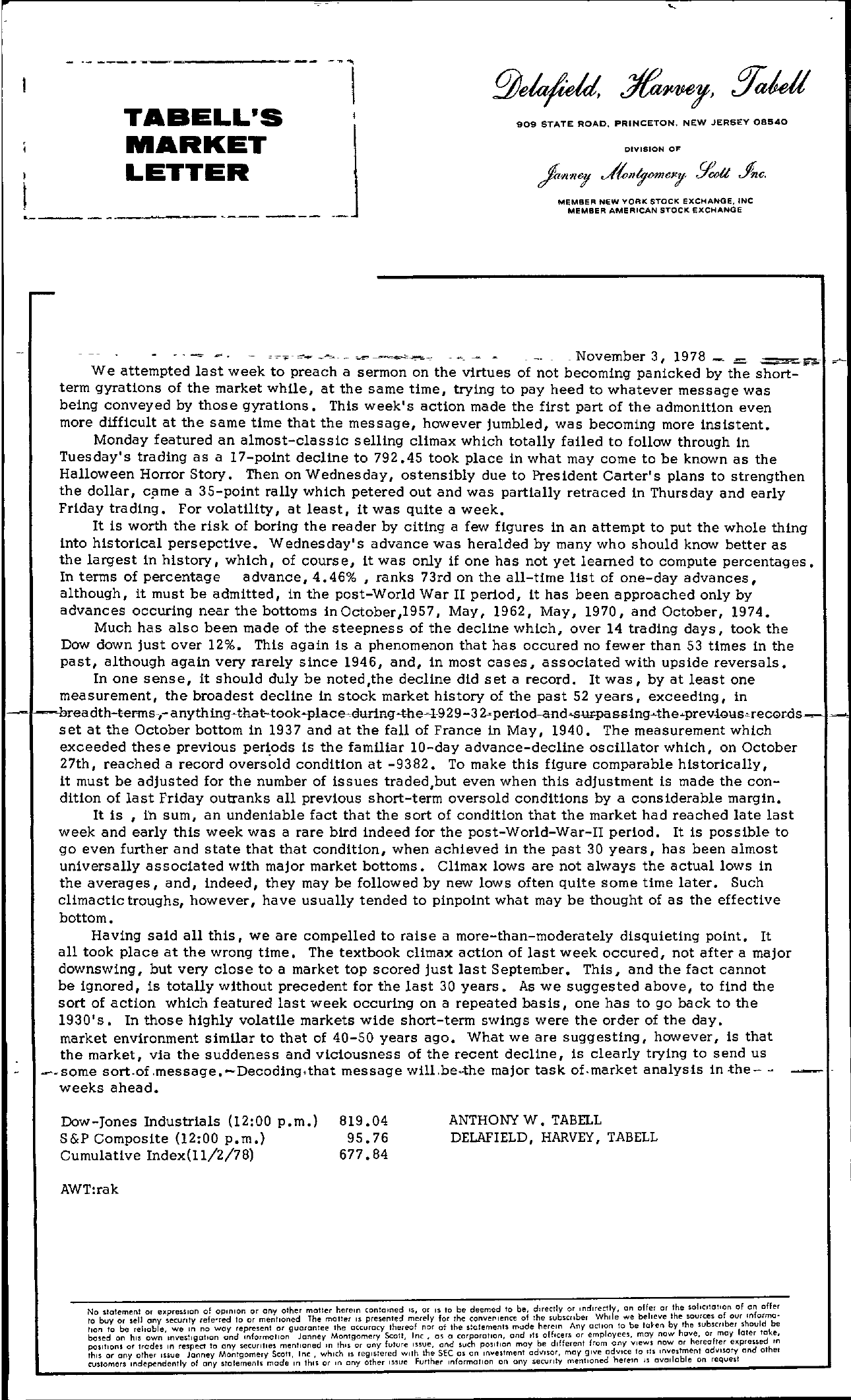 – -. —–,——– TABELL'S MARKET LETTER ———– — 909 STATE ROAD, PRINCETON. NEW JERSEY 08540 DIVISION OF MEMBER NEW VORK STOCI( eXCHANGe. INC MEMBER AMERICAN STOCK eXCHANGE – – – -. . –.- – —,.. – – – – November 3, 1978 …. .– We attempted last week to preach a sermon on the virtues of not becoming panicked by the short term gyrations of the market while, at the same time, trying to pay heed to whatever message was being conveyed by those gyrations. This week's action made the first part of the admonition even more difficult at the same time that the message, however jumbled, was becoming more insistent. Monday featured an almost-classic selling climax which totally failed to follow through in Tuesday's trading as a 17-point decline to 792.45 took place in what may come to be known as the Halloween Horror Story. Then on Wednesday, ostensibly due to President Carter's plans to strengthen the dollar, cilme a 35-point rally which petered out and was partially retraced in Thursday and early Friday trading. For volatility, at least, it was quite a week. It is worth the risk of boring the reader by citing a few figures in an attempt to put the whole thing into historical persepctive. Wednesday's advance was heralded by many who should know better as the largest in history, which, of course, it was only if one has not yet learned to compute percentages. In terms of percentage advance, 4.46 , ranks 73rd on the all-time list of one-day advances, although, it must be admitted, in the post-World War II period, it has been approached only by advances occuring near the bottoms inOctober,1957, May, 1962, May, 1970, and October, 1974. Much has also been made of the steepness of the decline which, over 14 trading days, took the Dow down just over 12. This again is a phenomenon that has occured no fewer than 53 times in the past, although again very rarely since 1946, and, in most cases, associated with upside reversals. In one sense, it should duly be noted,the decline did set a record. It was, by at least one measurement, the broadest decline in stock market history of the past 52 years, exceeding, in – -breadth-terms,- a nything-that-took-place-during-the4-9 29-3 2,period-and-S-Uf-ja set at the October bottom in 1937 and at the fall of France in May, 1940. The measurement which exceeded these previous periods is the familiar 10-day advance-decline oscillator which, on October 27th, reached a record oversold condition at -9382. To make this figure comparable historically, it must be adjusted for the number of issues traded,but even when this adjustment is made the con- dition of last Friday outranks all previous short-term oversold conditions by a considerable margin. It is , ih sum, an undeniable fact that the sort of condition that the market had reached late last week and early this week was a rare bird indeed for the post-World-War-II period. It is possible to go even further and state that that condition, when achieved in the past 30 years, has been almost universally associated with major market bottoms. Climax lows are not always the actual lows in the averages, and, indeed, they may be followed by new lows often quite some time later. Such climactic troughs, however, have usually tended to pinpoint what may be thought of as the effective bottom. Having said all this, we are compelled to raise a more-than-moderately disquieting pOint. It all took place at the wrong time. The textbook climax action of last week occured, not after a major downswing, but very close to a market top scored just last September. This, and the fact cannot be ignored, is totally without precedent for the last 30 years. As we suggested above, to find the sort of action which featured last week occuring on a repeated basis, one has to go back to the 1930's. In those highly volatile markets wide short-term swings were the order of the day. market environment similar to that of 40-50 years ago. What we are suggesting, however, is that the market, via the suddeness and viciousness of the recent decline, is clearly trying to send us -. some sort-of .message. -Decoding,that message will.be-the major task of. market analys-is in -the- – weeks ahead. Dow-Jones Industrials (1200 p.m.) S&P Composite (1200 p.m.) Cumulative Index(1l/2/78) 819.04 95.76 677.84 ANTHONY W. TABELL DELAFIELD, HARVEY, TABELL AWTrak No !clement or e)(preS5lon of opinion or any otner moiler herein contained IS, or IS 10 be deemed to be, directly or ,ndlrectly, on offer or Ihe 501lcllollon of an offer to buy or sell any security refered 10 or mentioned tlon 10 be reliable we In no way represent or guaronlee the accuracy Ihereof nor at the s;olemenls mude herein Any octlon to be to en y t e su sconfbeoru1rSt ou t k dbased on hiS own' Inves'lgallon ond mformotlon Janney Montgomery Scol!, Inc, os 0 corporation, and Its officers or employees, moy now have, or may a er e, pOSitiOns or trodes In to any seCUrities mentioned In thiS or any future Issue, and such position may be different from ony views now or hereoJter e)(prcdse thin thiS or any other Issue Janney Montgomery Scolt, Inc, whICh IS registered With Ihe SEC as on II'Ivestment adVisor, may give adVice to Its a yuory, on a el customers Independently of any statements mode In thiS or In any other Issue Further information on any security mentioned herem IS avol a e on rllques 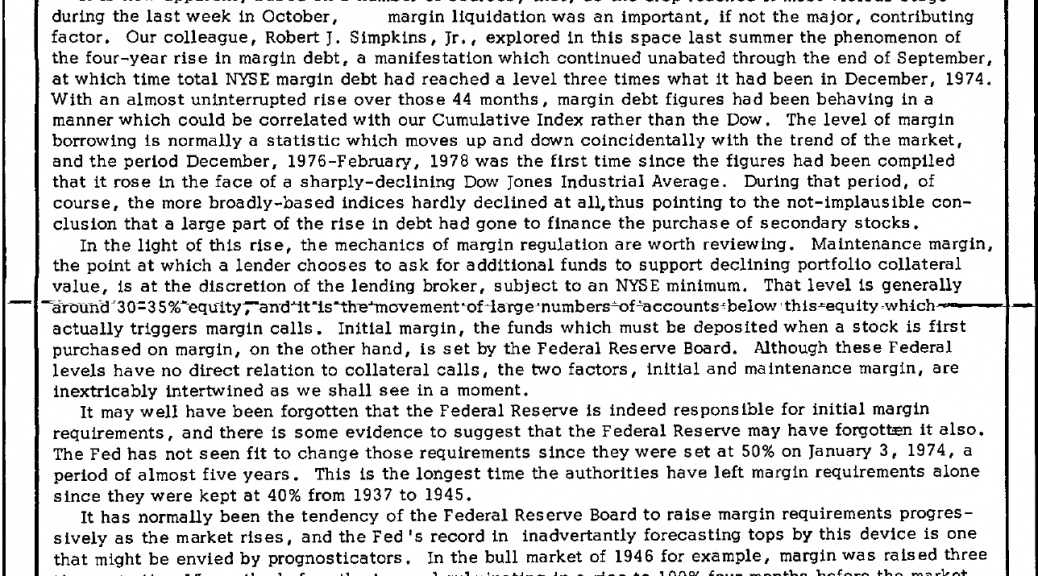 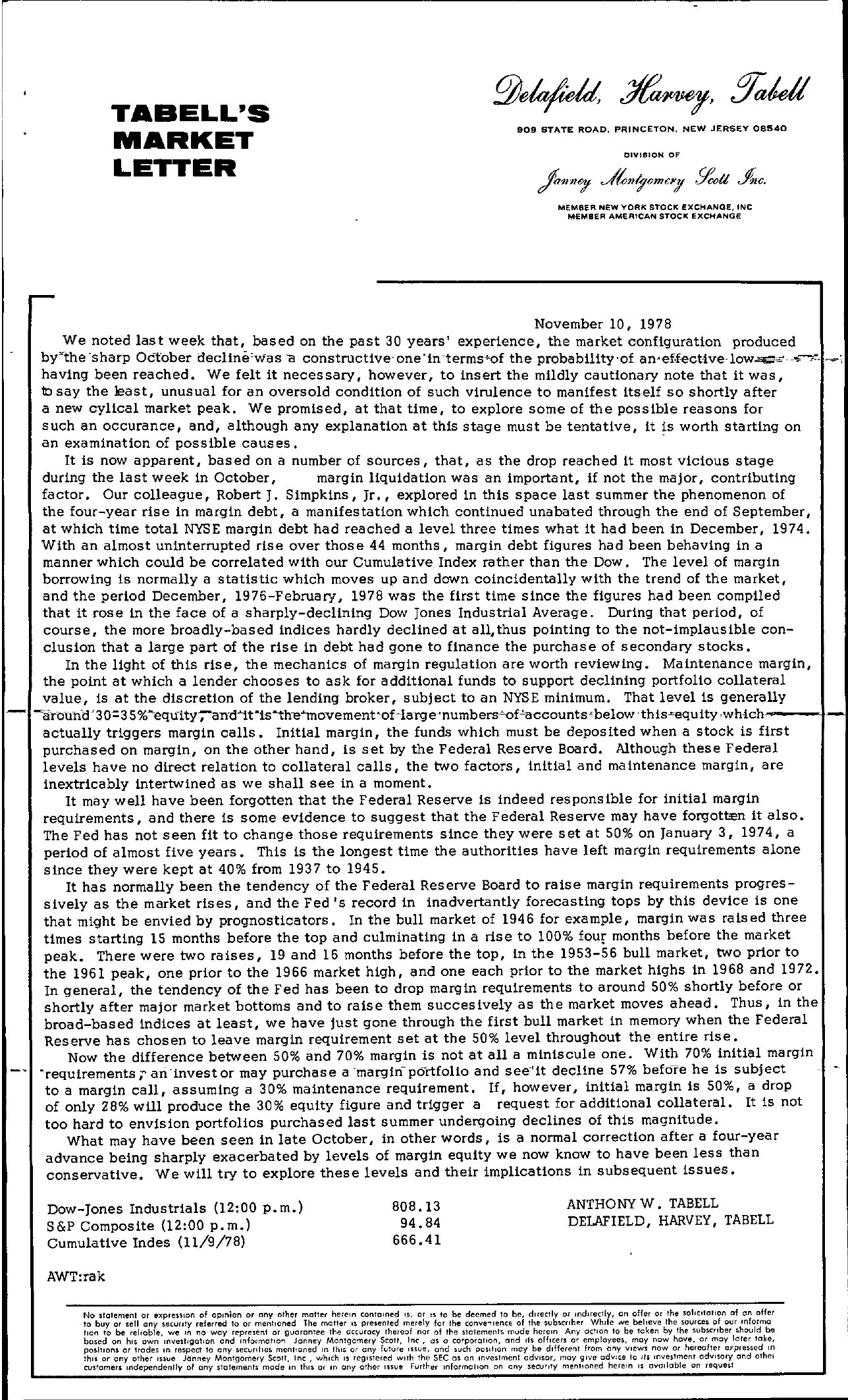 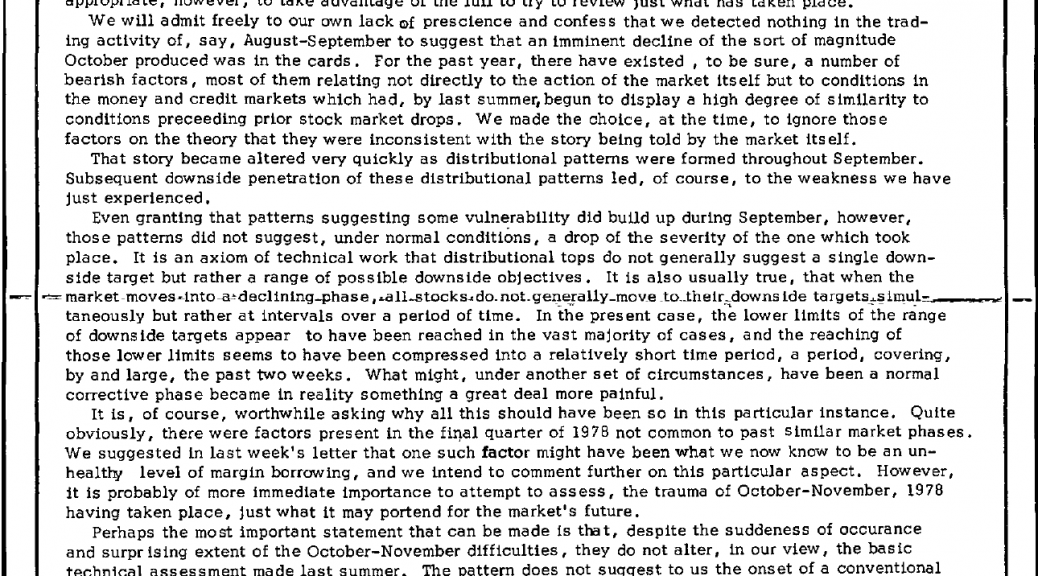 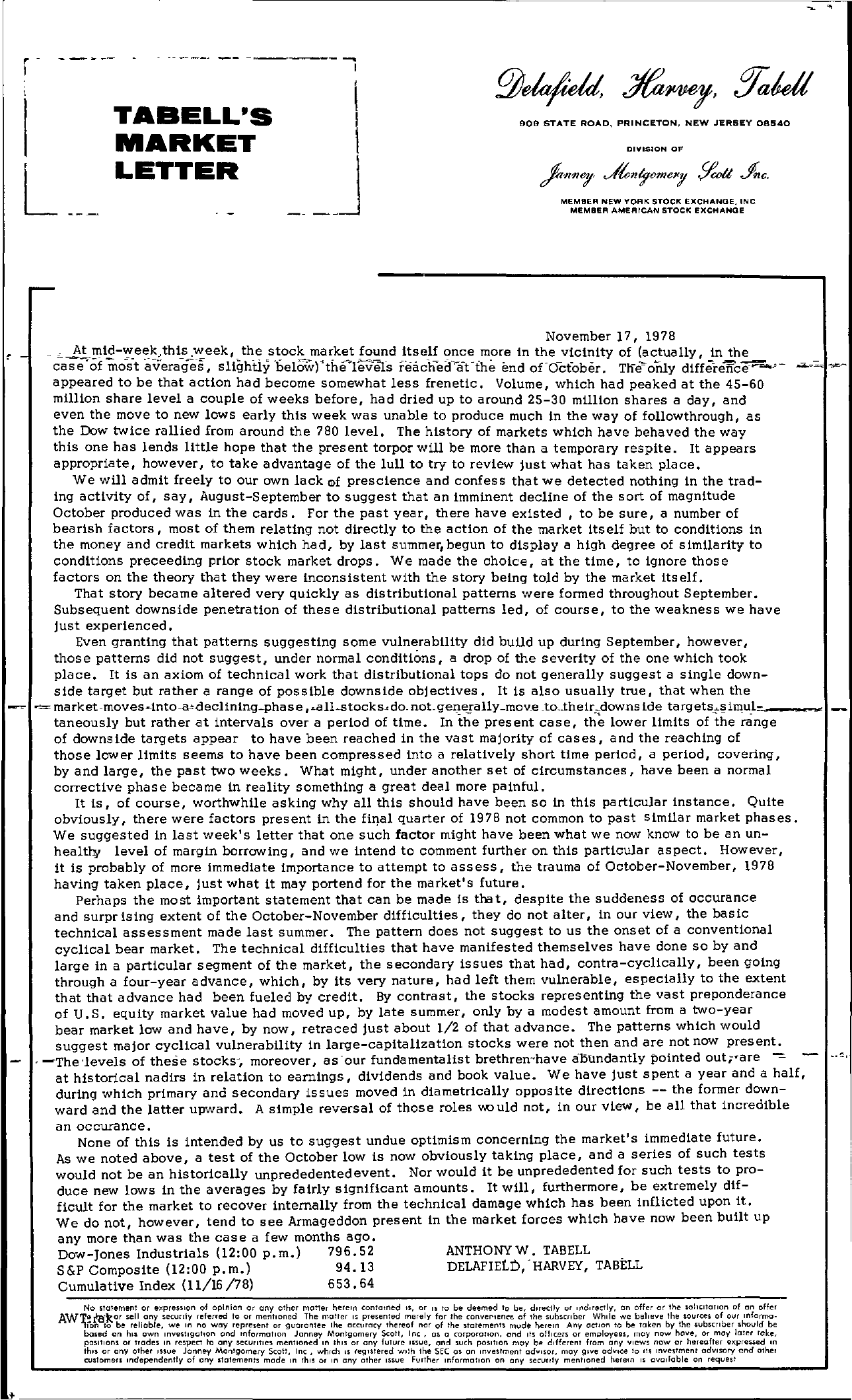 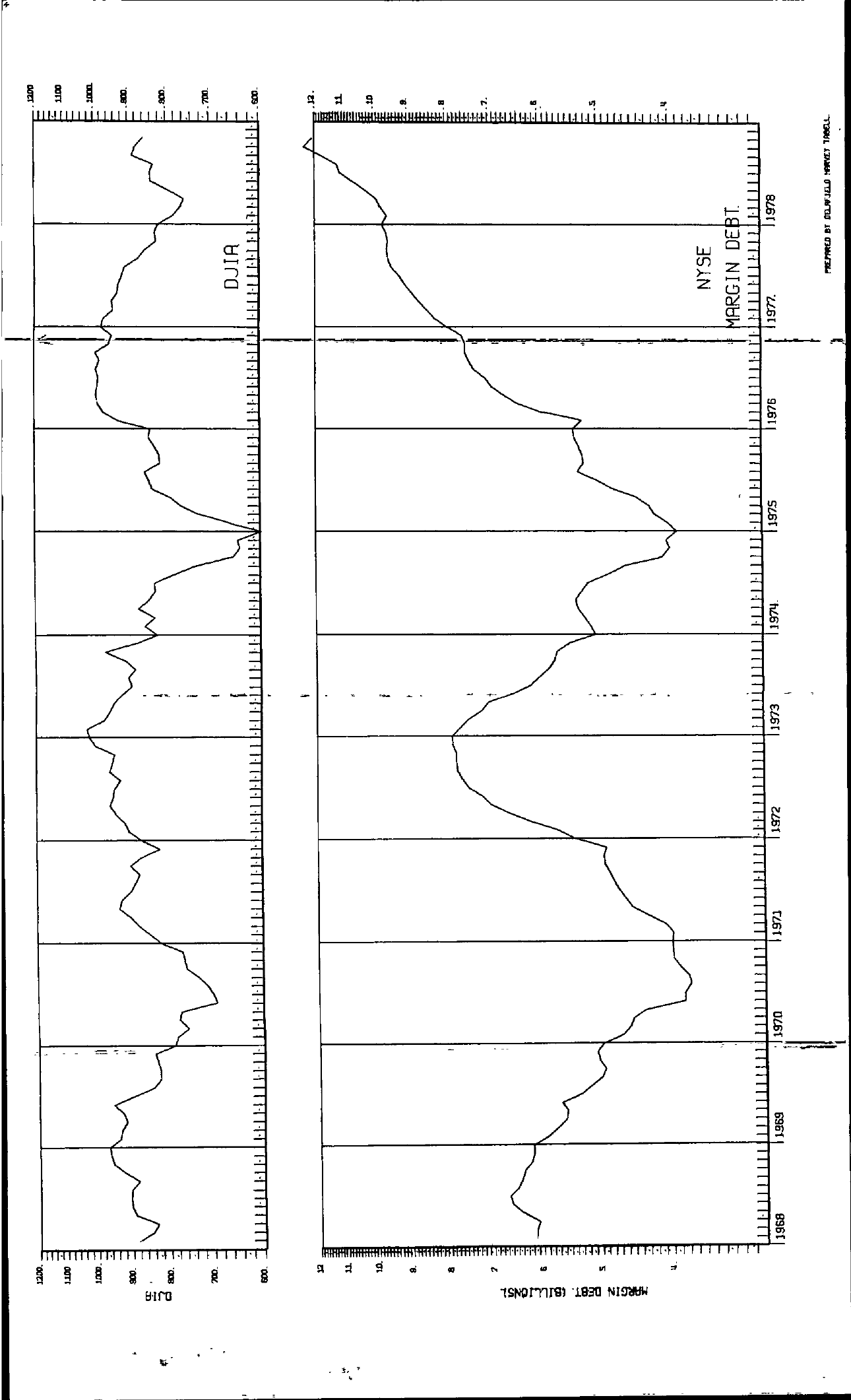 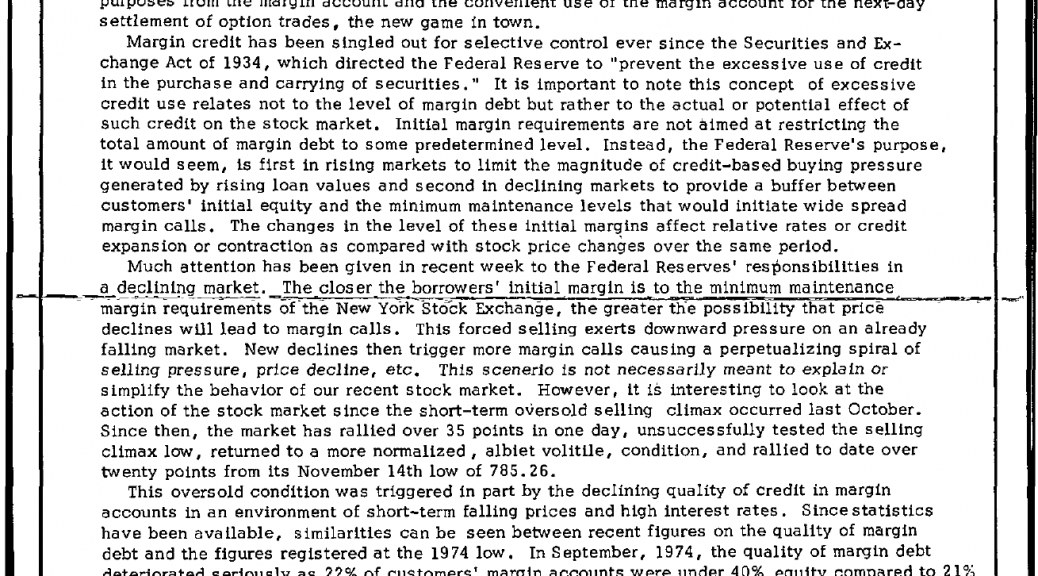 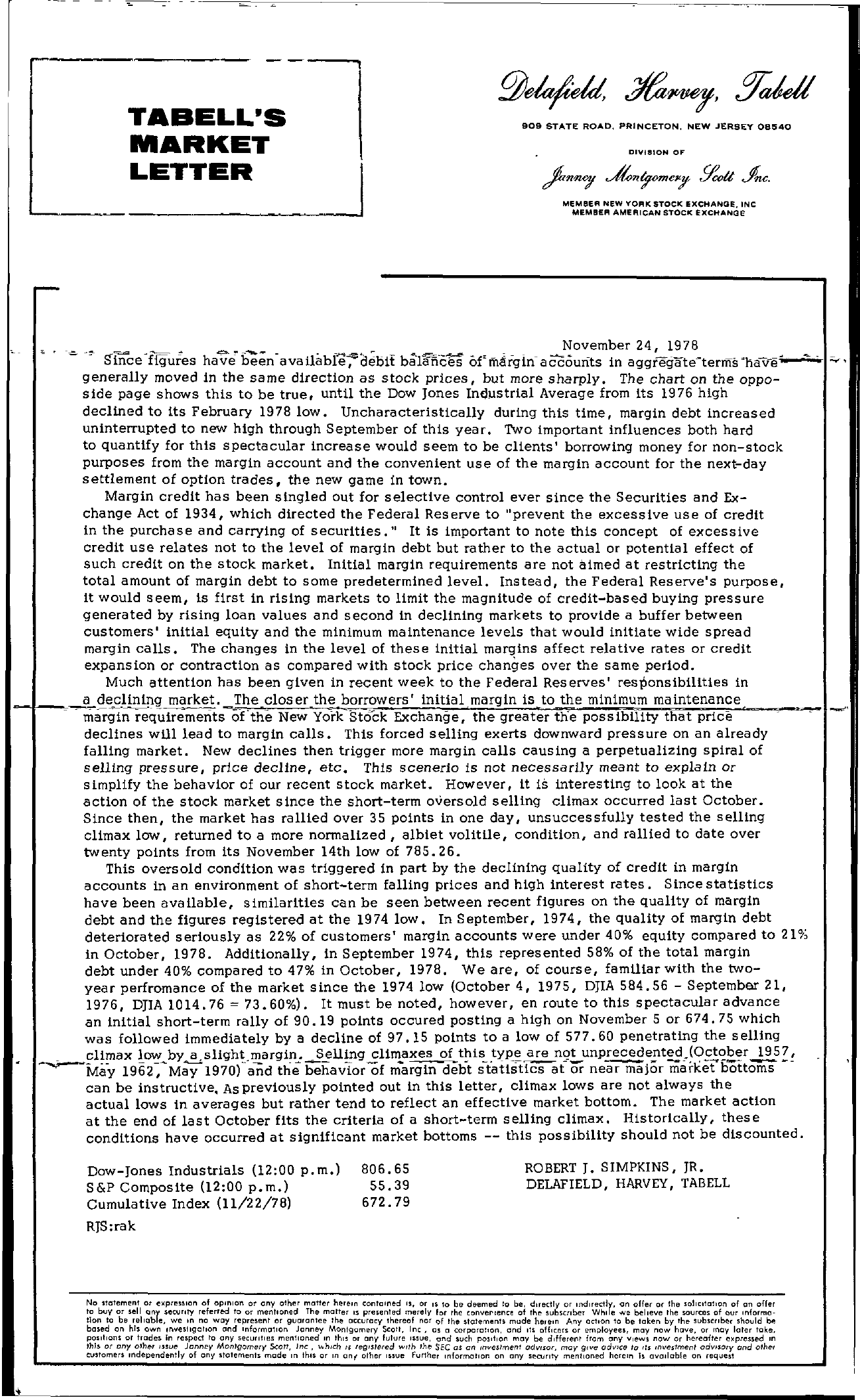 TABELL'S MARKET LETTER 909 STATE ROAD, PRINCETON, NEW .JERSEY 081540 DIVISION OF MEMBER NEW YORK STOCK EXCHANGE, INC MEMBER AMEftlCAN STOCK EXCHANQE o -cO. S'lnce 'f!gues I;'een' ava or margin' a November ccounts in 24, 1978 'haiv'e.;..-…… generally moved in the same direction as stock prices, but more sharply. The chart on the opposide page shows this to be true, until the Dow Jones InElllstrial Average from its 1976 high declined to its February 1978 low. Uncharacteristically during this time, margin debt increased uninterrupted to new high through September of this year. Two important influences both hard to quantify for this spectacular increase would seem to be clients' borrowing money for non-stock purposes from the margin account and the convenient use of the margin account for the next-day settlement of option trades. the new game in town. Margin credit has been singled out for selective control ever since the Securities and Ex- change Act of 1934. which directed the Federal Reserve to prevent the excessive use of credit in the purchase and carrying of securities. It is important to note this concept of excessive credit use relates not to the level of margin debt but rather to the actual or potential effect of such credit on the stock market. Initial margin requirements are not aimed at restricting the total amount of margin debt to some predetermined level. Instead, the Federal Reserve's purpose, it would seem, is first in rising markets to limit the magnitude of credit-based buying pressure generated by riSing loan values and second in declining markets to provide a buffer between customers' initial equity and the minimum maintenance levels that would initiate wide spread margin calls. The changes in the level of these initial margins affect relative rates or credit expansion or contraction as compared with stock price changes over the same period. Much attention has been given in recent week to the Federal Reserves' responsibilities in !he 910ser the borr!wers' initial margin is to the minimum maintenance margin requirements of the New York Stock Exchange, the greater the possibility that price declines will lead to margin calls. This forced selling exerts downward pressure on an already falling market. New declines then trigger more margin calls causing a perpetualizlng spiral of selling pressure, price decline, etc. This scenerio is not necessarily meant to explain Or simplify the behavior of our recent stock market. However, it Is interesting to look at the action of the stock market since the short-term oversold selling climax occurred last October. Since then, the market has rallied over 35 paints in one day, unsuccessfully tested the selling climax low, returned to a more normalized, albiet volitile, condition, and rallied to date over twenty pOints from its November 14th low of 785.26. This oversold condition was triggered in part by the declining quality of credit in margin accounts in an environment of short-term falling prices and high interest rates. Since statistics have been available, similarities can be seen between recent figures on the quality of margin debt and the figures registered at the 1974 low. In September, 1974, the quality of margin debt deteriorated seriously as 22 of customers' margin accounts were under 40 equity compared to 21 in October, 1978. Additionally, in September 1974, this represented 58 of the total margin debt under 40 compared to 47 in October, 1978. We are, of course, familiar with the two- year perfromance of the market since the 1974 low (October 4, 1975, DJIA 584.56 – September 21, 1976, DJIA 1014.76 73.60). It must be noted, however, en route to this spectacular advance an initial short-term rally of 90.19 points occured posting a high on November 5 or 674.75 which was followed immediately by a decline of 97.15 points to a low of 577.60 penetrating the selling climax low by a slight margin. Selling climaxes of this type are not unprecedented'October 1957, –May the behaviorof margin debt s't'a1iStics aCOr nea7iil'ajor marketllOitoms-' can be instructive. As previously painted out in this letter, climax lows are not always the actual lows in averages but rather tend to reflect an effective market bottom. The market action at the end of last October fits the criteria of a short-term selling climax. Historically, these conditions have occurred at Significant market bottoms — this possibility should not be discounted. Dow-Jones Industrials (1200 p.m.) S&P CompOSite (1200 p.m.) Cumulative Index (11/22/78) RJSrak 806.65 55.39 672.79 ROBERT J. SIMPKINS, JR. DELAFIELD, HARVEY, TABELL No tclement or expression of opinion or any olher matier herem contolned IS, or IS 10 be deemed to be, directly or Indlrectlr.' an offer Of the sollcltotlon of on offer to buy or sell (lnr. sl!cvruy referred to or mentioned The matter IS presented merely for the converlence of the subSCriber Whl e we believe the sources of Iur mformo- tlon to be rei lab e, we In no way represent or guarantee the occuracy thereof nor of the mude herem Any achon to be taken by the subSCriber should be based on his own Investigation and Information Janney Montgomery Scott, Inc, as a corporat,on, Clnd Its offoers or employees, may now have, or may later take, positions or trades In respect to any securities mentioned mil-lis or any future ISsue, and such posillon may be different from any views now or hereafter (lxpressed m In)s or cny olner ISsue Janney Montgomery Scott, Inc, ,nlch /5 registered woh Ine SEC as on InveMmenl adVisor, may gIVe adVice to lIs Investment adViSOry and olhel customers Independently of any statements made In thiS or In onf other Inue Further information on any security menlloned hcrCln h available on request