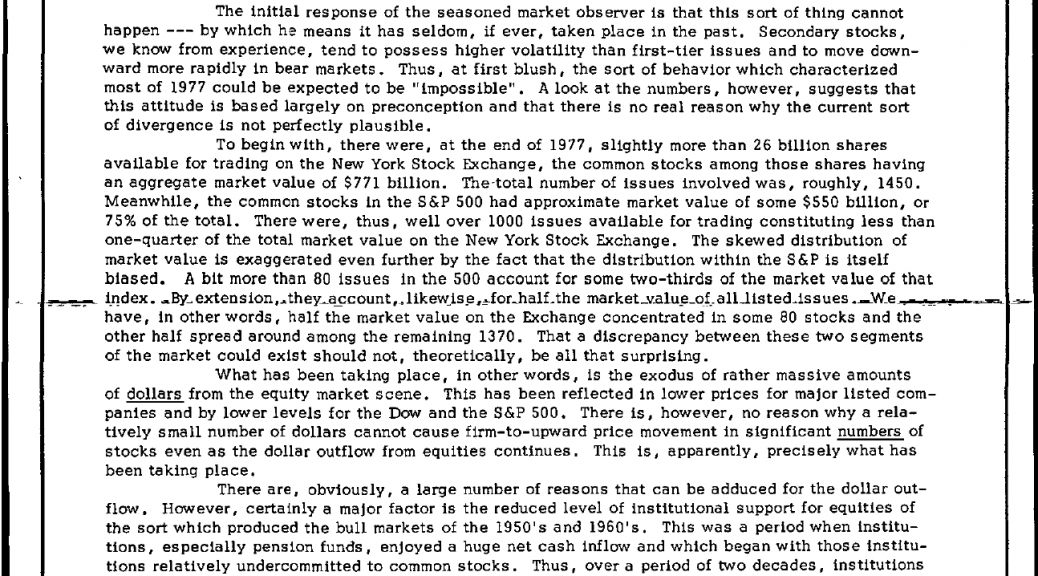 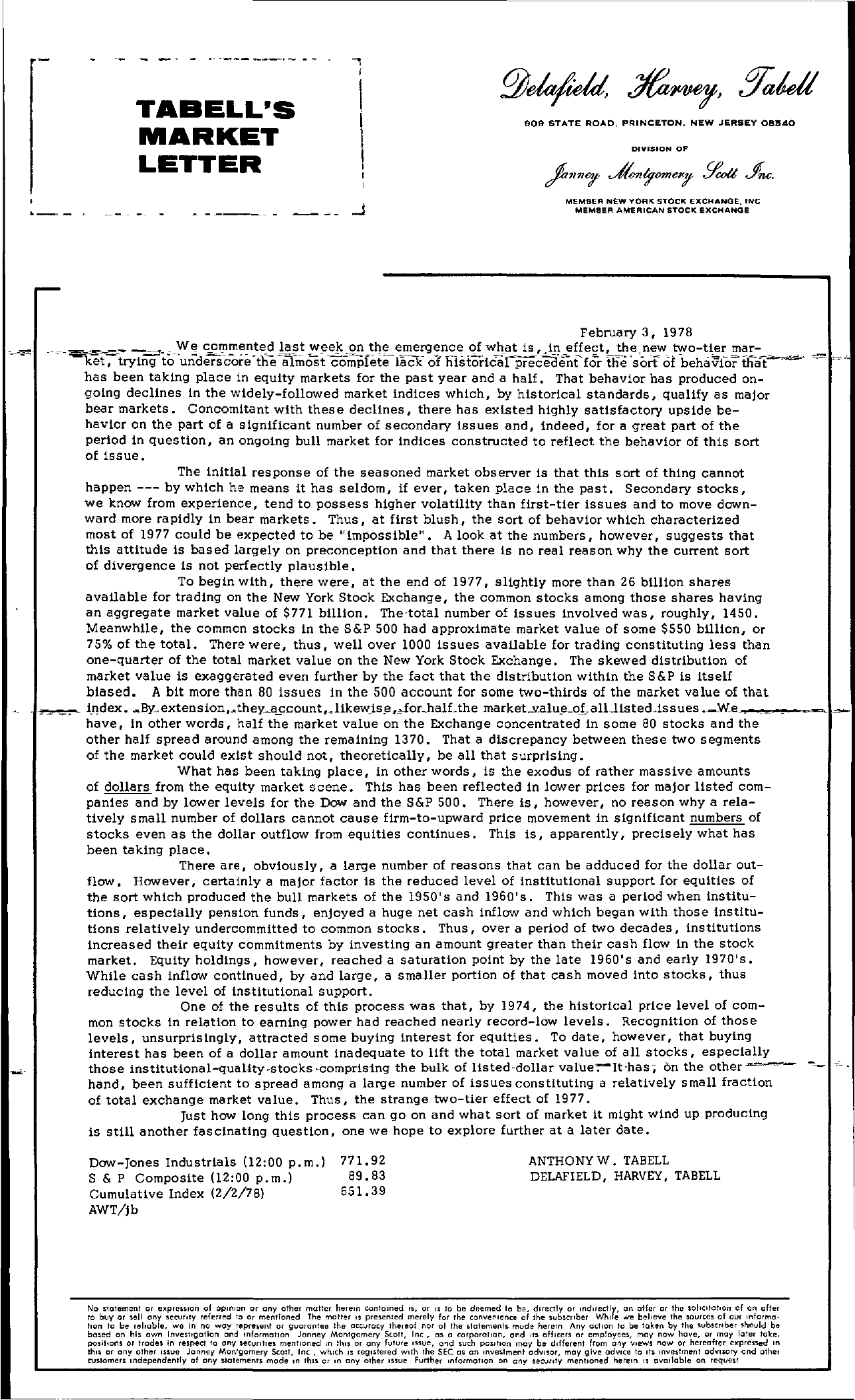 — TABELL'S MARKET LETTER I I \ I I I ..J 909 STATE ROAD, PRINCETON. NEW JERSEY 08840 DIVISION OF MEMBER NEW YORK STOCK eXCHANGE, INC MEMBEA AMERICAN STOCK EXCHANGE February 3, 1978 yv e C5l'!l!1ted !.t ve1 n tl1l3 emergence f w1'!at is, i effest, the ,new o-ter mar- tne oiket- tryingto underscore 'theiil'most completefaCk' of 1lIstor1cianli'ecedentfor 'sort behavior that— has been taking place In equity markets for the past year and a half. That behavior has produced on- going declines In the Widely-followed market Indices which, by historical standards, qualify as major bear markets. Concomitant with these declines, there has existed highly satisfactory upside be- havior on the part of a significant number of secondary Issues and, Indeed, for a great part of the period In question, an ongoing bull market for Indices constructed to reflect the behavior of this sort of Issue. The Initial response of the seasoned market observer Is that this sort of thing cannot happen — by which he means It has seldom, if ever, taken place In the past. Secondary stocks, we know from experience, tend to possess higher volatility than first-tier Issues and to move down- ward more rapidly In bear markets. Thus, at first blush, the sort of behavior which characterized most of 1977 could be expected to be Impossible. A look at the numbers, however, suggests that this attitude Is based largely on preconception and that there Is no real reason why the current sort of divergence Is not perfectly plausible. To begin With, there were, at the end of 1977, slightly more than 26 billion shares available for trading on the New York Stock Exchange, the common stocks among those shares having an aggregate market value of 771 billion. Thetotal number of Issues Involved was, roughly, 1450. Meanwhile, the common stocks In the S&P 500 had approximate market value of some 550 billion, Or 75 of the total. There were, thus, well over 1000 Issues available for trading constituting less than one-quarter of the total market value on the New York Stock Exchange. The skewed distribution of market value Is exaggerated even further by the fact that the distribution within the S&P Is Itself biased. A bit more than 80 Issues In the 500 account for some two-thirds of the market value of that . iJ!dex. Byextension,.theyaccount,l1kewJsJ3.foLhaILthe markeLv.alu,e.otaILl1sted.issues .We,'''''' I have, In other words, half the market value on the Exchange concentrated In some 80 stocks and the other half spread around among the remaining 1370. That a discrepancy between these two segments of the market could exist should not, theoretically, be all that surprising. What has been taking place, in other words, Is the exodus of rather massive amounts of dollars from the equity market scene. This has been reflected in lower prices for major listed com- panies and by lower levels for the Dow and the S&P 500. There is, however, no reason why a rela- tively small number of dollars cannot cause firm-to-upward price movement in Significant numbers of stocks even as the dollar outflow from equities continues. This is, apparently, precisely what has been taking place. There are, obviously, a large number of reasons that can be adduced for the dollar out- flow. However, certainly a major factor is the reduced level of Institutional support for equities of the sort which produced the bull markets of the 1950's and 1960's. This was a period when Institu- tlons, especially pension funds, enjoyed a huge net cash Inflow and which began with those Institu- tions relatively undercommltted to common stocks. Thus, over a period of two decades, Institutions Increased their equity commitments by investing an amount greater than their cash flow In the stock market. Equity holdings, however, reached a saturation point by the late 1960's and early 1970's. While cash Inflow continued, by and large, a smaller portion of that cash moved into stocks, thus reducing the level of institutional support. One of the results of this process was that, by 1974, the historical price level of com- mon stocks in relation to earning power had reached nearly record-low levels. Recognition of those levels, unsurprls1ngly, attracted some buying interest for equities. To date, however, that buying interest has been of a dollar amount Inadequate to 11ft the total market value of all stocks, especially those Institut.lonal-quaUty,stocks,comprlsing the bulk of l1sted'dollar valueIthas; on the other— hand, been sufficient to spread among a large number of Issues constituting a relatively small fraction of total exchange market value. Thus, the strange two-tier effect of 1977. Just how long this process can go on and what sort of market It might wind up producing Is still another fascinating question, one we hope to explore further at a later date. Dow-Jones Industrials (1200 p.m.) S & P Composite (1200 p,m.) Cumulative Index (2/2/78) AWT/jb 771. 92 89.83 651. 39 ANTHONY W. TABELL DELAFIELD, HARVEY, TABELL No statement or expression of opinion or any olher matter herein contall1ed IS, or 15 10 be deemed to be, directly or Indlrectlr,' on offer or the 501lcllollon of an offer 10 buy or sell any security referred to Or mentioned The matter 15 presented merely for the conVel'lenCE of Ihe subSCriber Wh, e He believe the sources of our Informo- lion to be reliable, we In no way repre5ent or guarantee Ihe accvracy thereof nor of the statements mude herein Any action 10 be taken by the subscriber should be based on his own Inveshgatlon and InformatIOn Janney Montgomery Scott, Inc, as a corporation, and Its off,cers or employees, may now have, or may later lake, positions or trades In respect to any 5eCUrilies mentioned 111 thiS or any future Issue, o'ld such POSition may be different from any views now or hereafter expressed In thu or any other Issue Janney Montgomery Scott, Inc, whICh 15 regIStered ,,,11th the SEC as an Investment adVisor, may give odvlCe to Its ,vestment adVisory and other customers Independently of any statements made ,n th,s or In any other Issue Further Information on any secufl'y mentioned herein 15 available on request 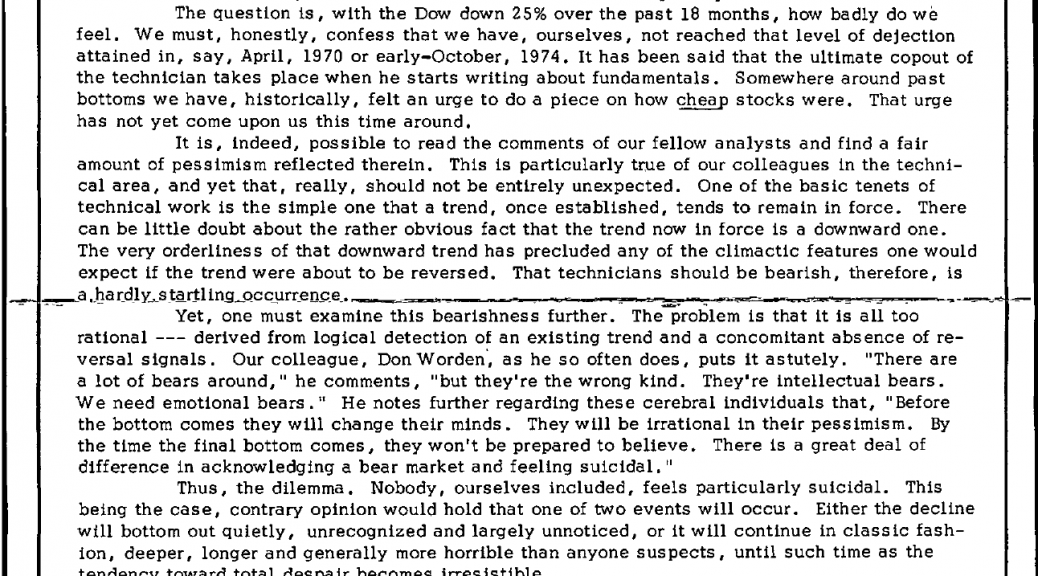 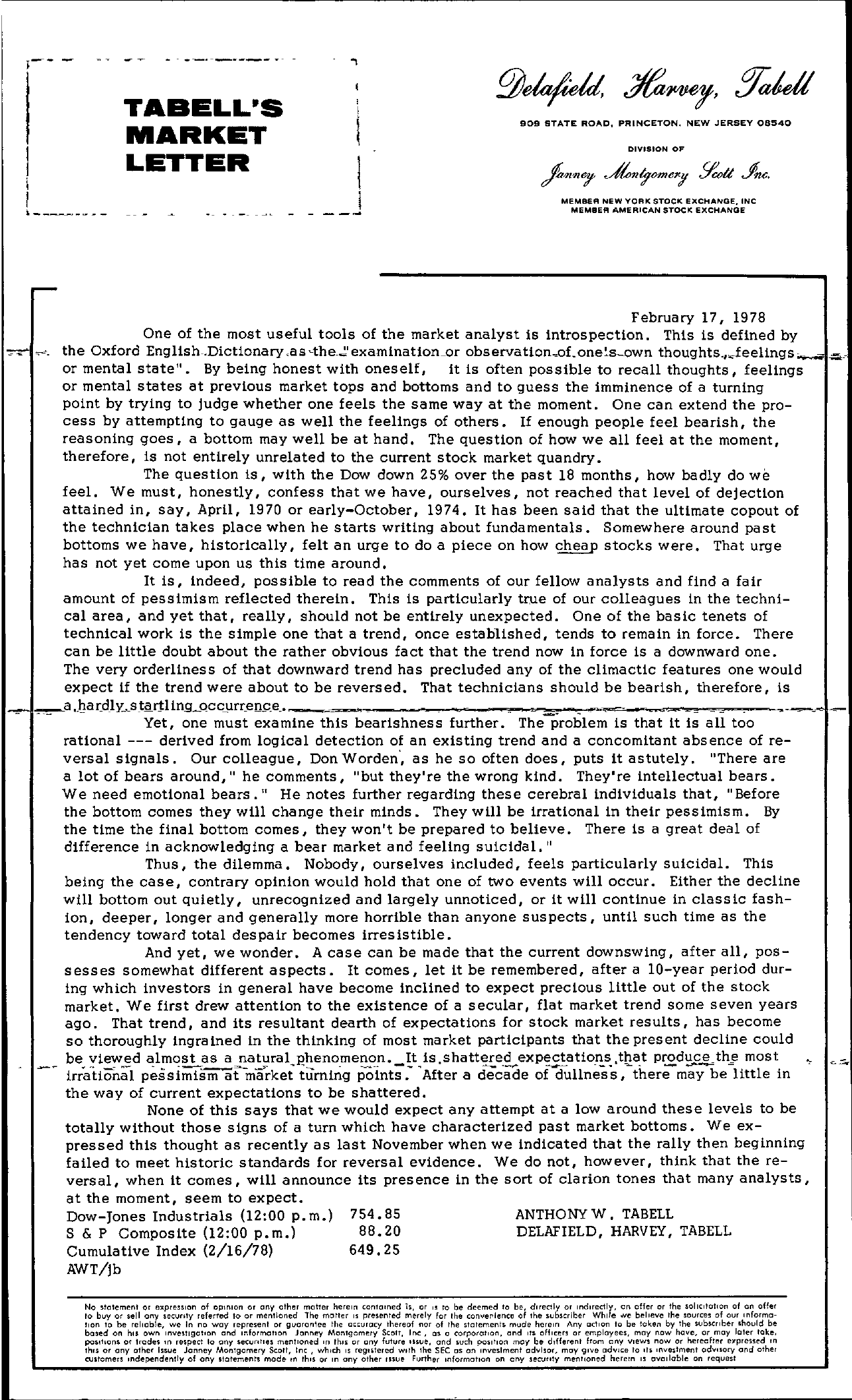 ,.- ….. –.—– – ., TABELL'S I I .i I—— — MARKET LETTER .- . – — i I I – —! eIad 1lH', .kII 909 STATE ROAD, PRINCETON. NEW JERSEY 08540 DIVISION OF c1U I'n,,!/ ulimll;!ome1'Y Ycoll Ync, MEMBER NEW YORI( STOCK eXCHANGE, INC MEMBER AMERICAN STOCK eXCHANGE February 17, 1978 One of the most useful tools of the market analyst is introspection. This is defined by — the Oxford English-.Dictionary ,as Lthe'examinatlonor observat1onof.onesown thoughts,feellngs …………. or mental state. By being honest with oneself, it is often possible to recall thoughts, feelings or mental states at previous market tops and bottoms and to guess the imminence of a turning pOint by trying to judge whether one feels the same way at the moment. One can extend the pro- cess by attempting to gauge as well the feelings of others. If enough people feel bearish, the reasoning goes, a bottom may well be at hand. The question of how we all feel at the moment, therefore, is not entirely unrelated to the current stock market quandry. The question is, with the Dow down 25 over the past 18 months, how badly do we feel. We must, honestly, confess that we have, ourselves, not reached that level of dejection attained in, say, April, 1970 or early-October, 1974. It has been said that the ultimate copout of the technician takes place when he starts writing about fundamentals. Somewhere around past bottoms we have, historically, felt an urge to do a piece on how cheap stocks were. That urge has not yet come upon us this time around. It is, indeed, possible to read the comments of our fellow analysts and find a fair amount of pessimism reflected therein. This is particularly true of our colleagues in the techni- cal area, and yet that, really, should not be entirely unexpected. One of the basic tenets of technical work is the Simple one that a trend, once established, tends to remain in force. There can be little doubt about the rather obvious fact that the trend now in force is a downward one. The very orderliness of that downward trend has precluded any of the climactic features one would expect If the trend were about to be reversed. That technicians should be bearish, therefore, is a.hardlystlirtlingQccurre!).ce. . '., . Yet, one must examine this bearishness further. The problem is that it is all too rational — derived from logical detection of an existing trend and a concomitant absence of re- versal signals. Our colleague, Don Worden', as he so often does, puts it astutely. There are a lot of bears around, he comments, but they're the wrong kind. They're intellectual bears. We need emotional bears. He notes further regarding these cerebral indiViduals that, Before the bottom comes they will change their minds. They will be irrational in their peSSimism. By the time the final bottom comes, they won't be prepared to believe. There is a great deal of difference in acknowledging a bear market and feeling suicidal. Thus, the dilemma. Nobody, ourselves included, feels particularly suicidal, This being the case, contrary opinion would hold that one of two events will occur. Either the decline will bottom out quietly, unrecognized and largely unnoticed, or It will continue in classic fash- ion, deeper, longer and generally more horrible than anyone suspects, until such time as the tendency toward total despair becomes irresistible. And yet, we wonder. A case can be made that the current downswing, after all, pos- s esses somewhat different aspects. It comes, let It be remembered, after a 10-year period dur- ing which investors in general have become inclined to expect precious little out of the stock market. We first drew attention to the existence of a secular, flat market trend some seven years ago. That trend, and Its resultant dearth of expectations for stock market results, has become so thoroughly ingrained in the thinking of most market participants that the present decline could be viewed almost as a natural Qhenomenon. It is .shattered expectations .that producethS! most … — – – – – –…T ; – . –. — –……… —– –'- – -.-….— irrational pessimiS'ii1'at market turning points. After a decade of dullness, there may be little in the way of current expectations to be shattered. None of this says that we would expect any attempt at a low around these levels to be totally without thos e signs of a turn which have characterized past market bottoms. We ex- pressed this thought as recently as last November when we indicated that the rally then beginning failed to meet historic standards for reversal evidence. We do not, however, think that the re- versal, when it comes, will announce its presence in the sort of clarion tones that many analysts, at the moment, seem to expect. Dow-Jones Industrials (1200 p.m.) 754.85 S & P Composite (1200 p.m.) 88.20 ANTHONY W. TABELL DELAFIELD, HARVEY, TABELL Cumulative Index (2/16/78) 649.25 AWT!jb No statement or expreslon of opinIOn or any other malter herein contolned is, or IS to be deemed to be, directly or indirectly, on offer or the soliCitation of on offer to buy or sell any security referred 10 or mentioned The matter IS preented merely for the convellenc of the subscriber While we believe the sources of our InformotlOn to be reliable, we In no way represent or guarantee the accuracy thereof nor of the statements mude herein Any action to be token by the subscriber should be bosed on hiS own Inve,tlgollon and information Janney Montgomery Scott, Inc, os a corporation, and Its officers or employees, may now have, or may loter take, positions or trodes ,n repect to any secuntles mentioned In thiS or any future Issue, and such position may be different from any views now or hereafter eypressed In thiS or any other Issue Janney Montgomery Scott, Inc, which IS registered With the SEC as on Investment advisor, may gl'lIe adVice to Its Investment odvlsory and othel customers mdependently of ony statements made In Ih,s or In any other luue Further information on any security mentioned nereln IS avoiloble on request 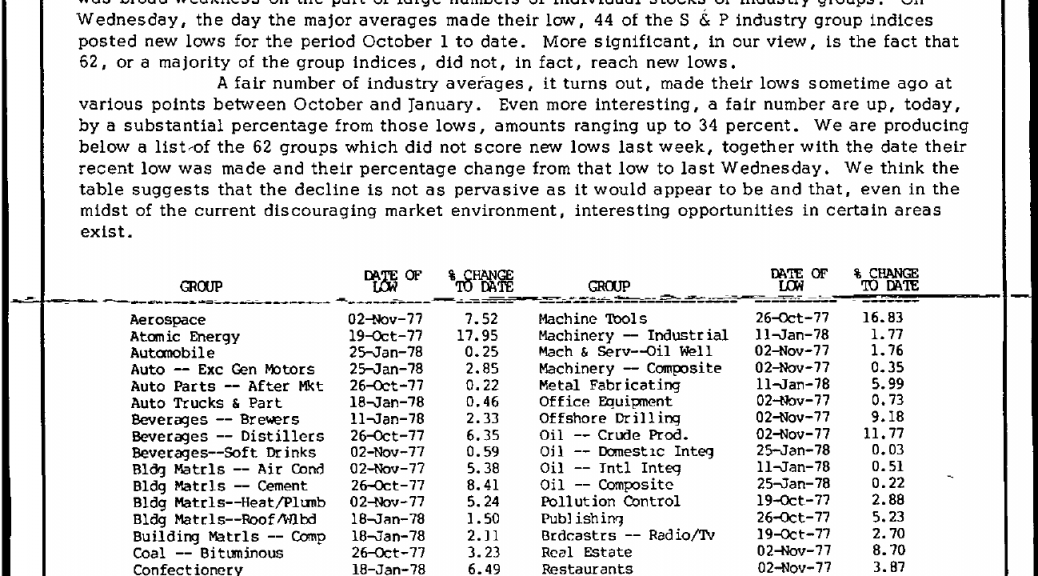 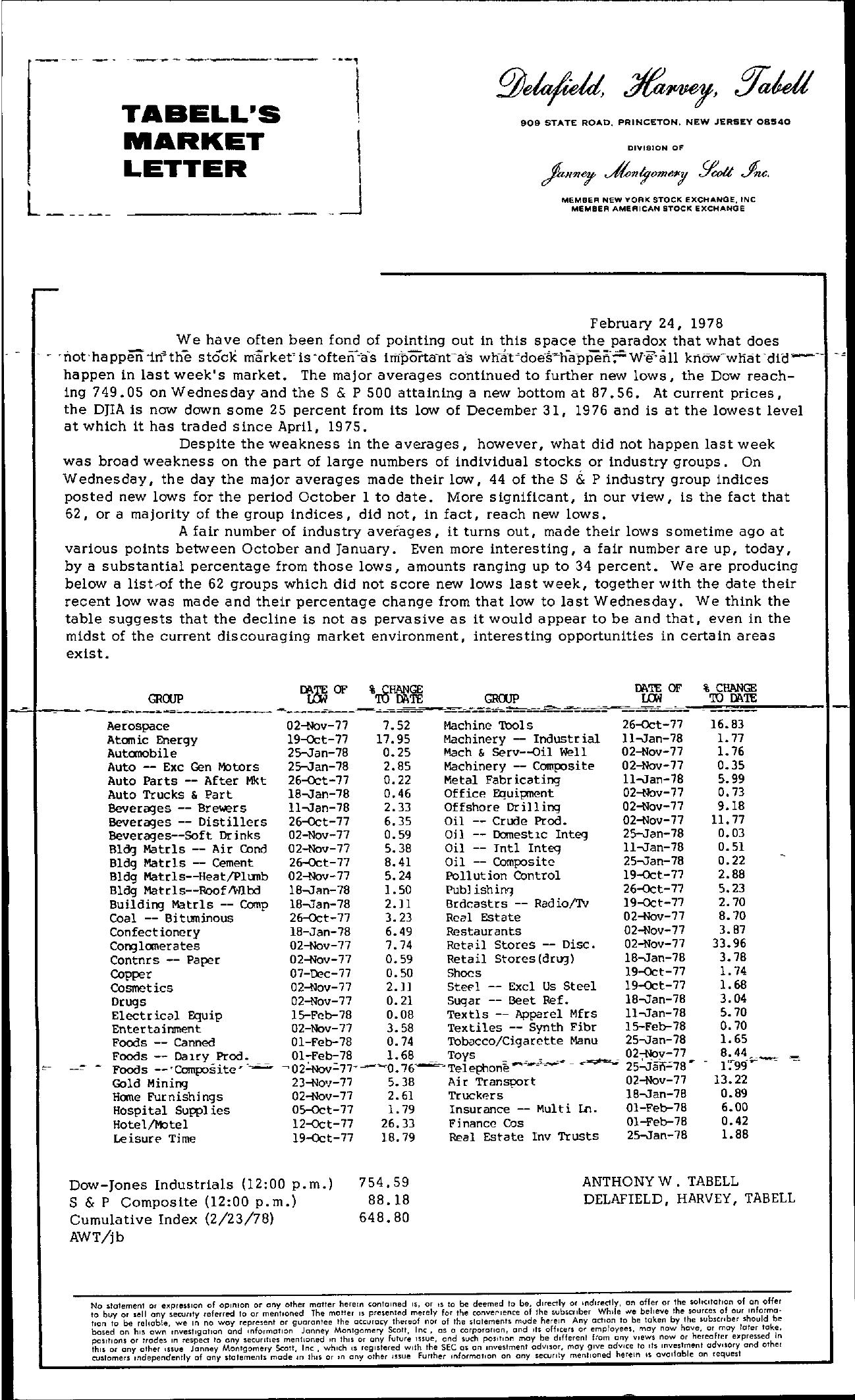