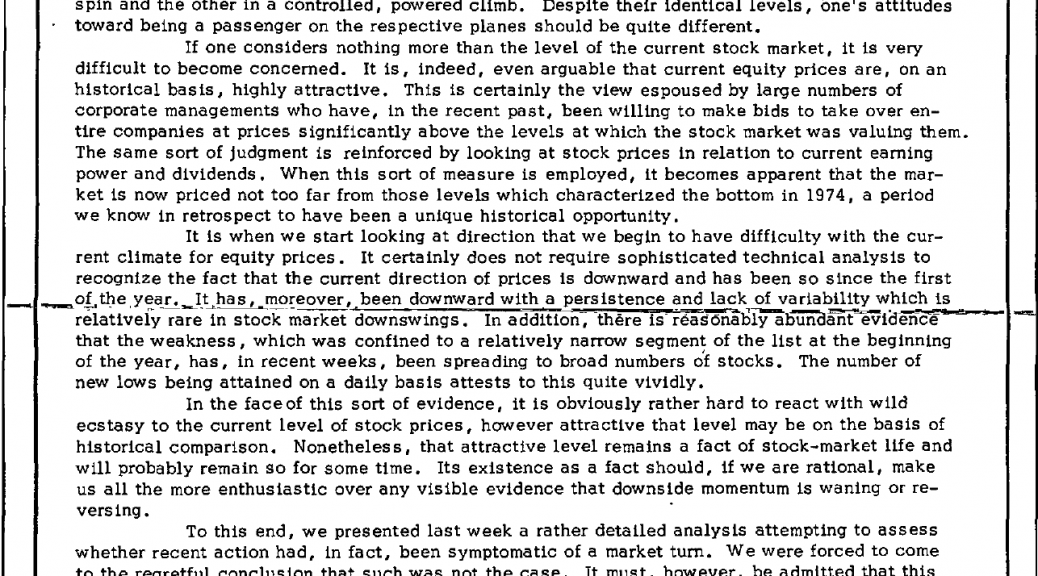 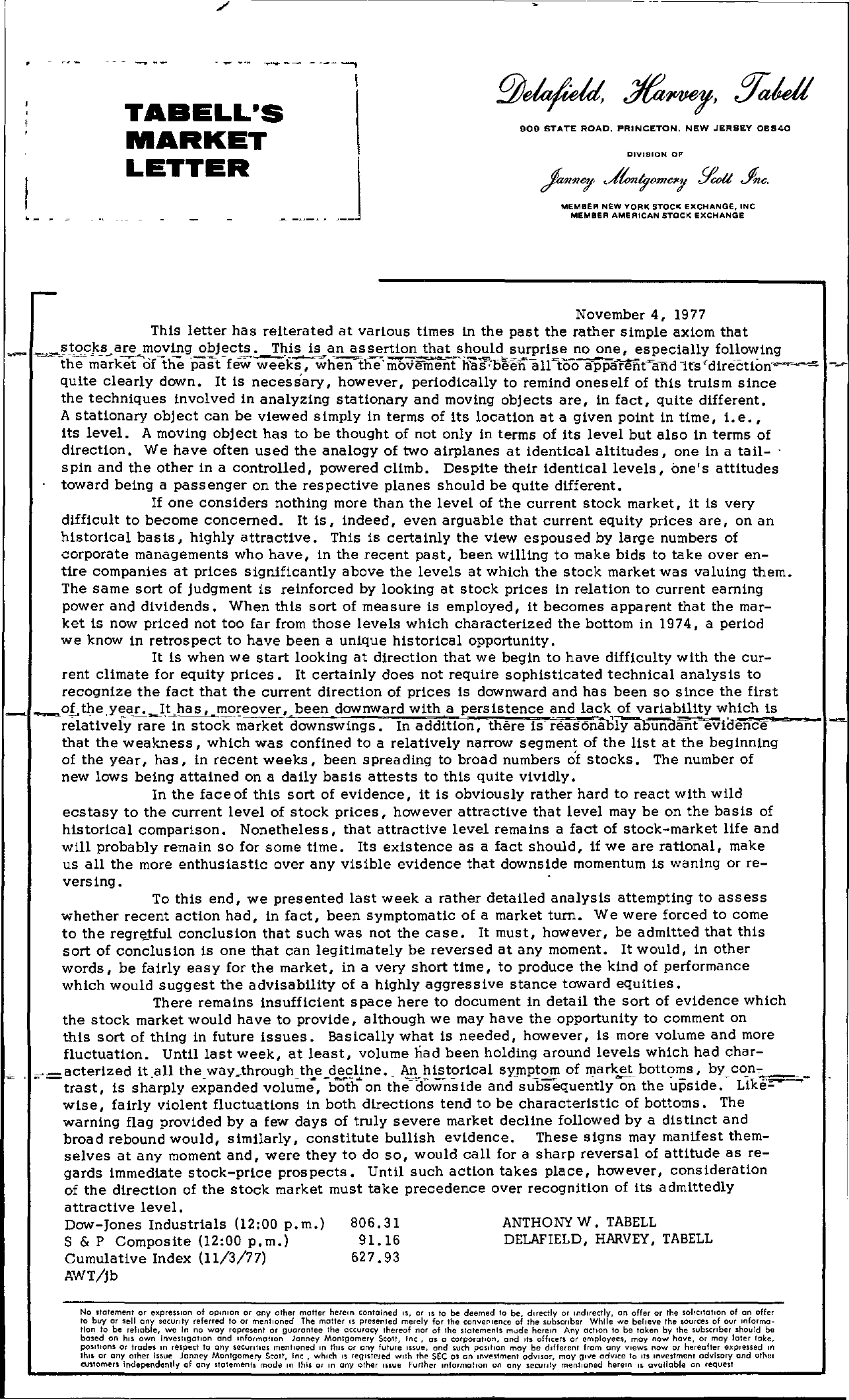 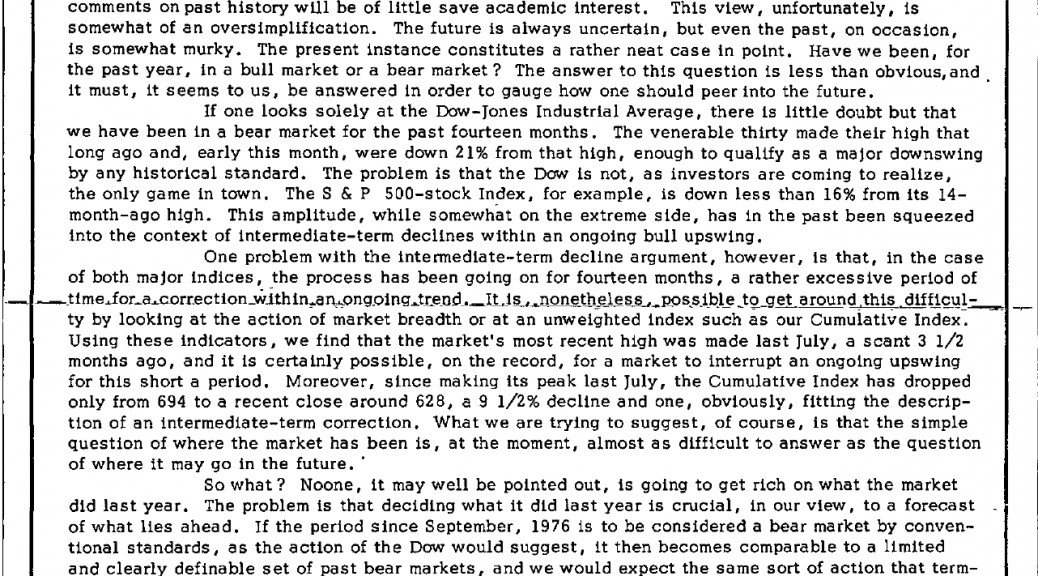 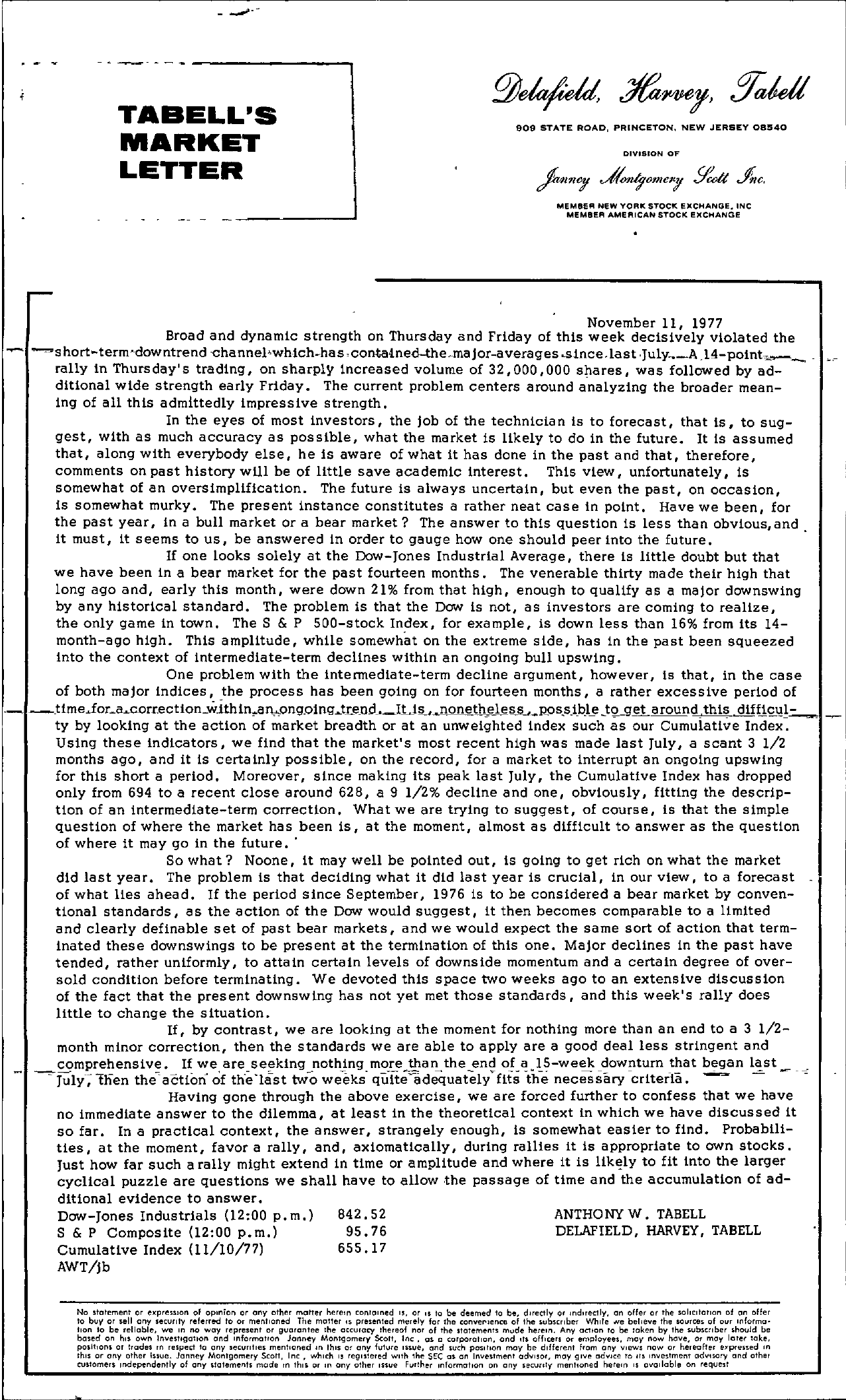 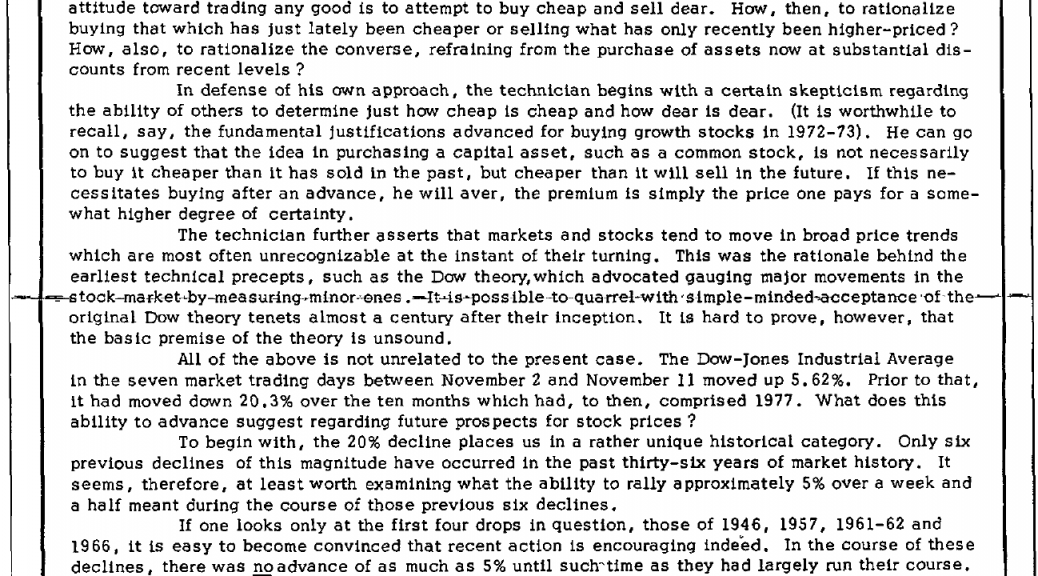 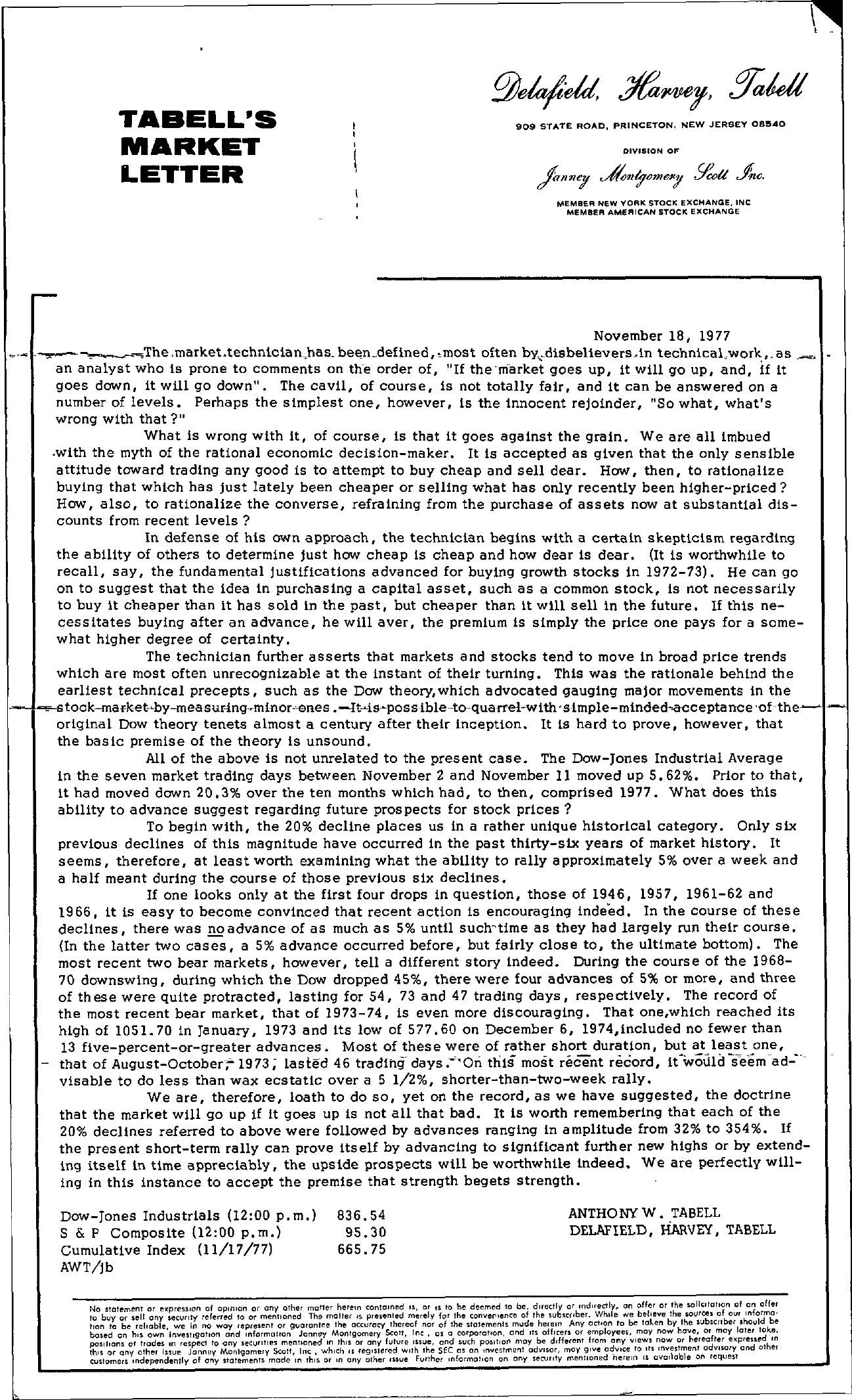 TABELL'S MARKET LETTER 909 STATE ROAD, PRINCETON, NEW JERSEY 08540 PIVISION OF MEMBER New VORK STOCK EXCHANGE, INC MEMBER AMERICAN STOCK EXCHANGE – November 18, 1977 . –..–…She ,market.technician,has. beOiln.defined, ,most often by…..disbel1evers.in technicalowork,. as . an analyst who is prone to comments on th-e order of, If the 'market goes up, it will go up, and, if It goes down, it will go down. The cavil, of course, is not totally fair, and it can be answered on a number of levels. Perhaps the simplest one, however, is the innocent rejoinder, So what, what's wrong with that What is wrong with it, of course, is that it goes against the grain. We are all imbued ,with the myth of the rational economic decision-maker. It is accepted as given that the only sensible attitude toward trading any good is to attempt to buy cheap and sell dear. How, then, to rationalize buying that which has just lately been cheaper or selling what has only recently been higher-priced How, also, to rationalize the converse, refraining from the purchase of assets now at substantial discounts from recent levels In defense of his own approach, the technician begins with a certain skepticism regarding the ability of others to determine just how cheap Is cheap and how dear is dear. (It is worthwhile to recall, say, the fundamental justifications advanced for buying growth stocks in 1972-73). He can go on to suggest that the idea in purchasing a capital asset, such as a common stock, is not necessarily to buy it cheaper than it has sold In the past, but cheaper than it will sell in the future. If this necessitates buying after an advance, he will aver, the premium Is simply the price one pays for a somewhat higher degree of certainty. The technician further asserts that markets and stocks tend to move In broad price trends which are most often unrecognizable at the instant of their turning. This was the rationale behind the earliest technical precepts, such as the Dow theory, which advocated gauging major movements In the I–…-tock-mak-et-by-measur-ing-.m!nor-'-Gnes .-Itisposs-lble–toquaiTelwith 's-imple-minded,acceptance 'of-the- original Dow theory tenets almost a century after their inception. It Is hard to prove, however, that the baSic premise of the theory is unsound. All of the above is not unrelated to the present case. The DOW-Jones Industrial Average in the seven market trading days between November 2 and November 11 moved up 5.62. Prior to that, it had moved down 20.3 over the ten months which had, to then, comprised 1977. What does this ability to advance suggest regarding future prospects for stock prices To begin with, the 20 decline places us In a rather unique historical category. Only six previous declines of this magnitude have occurred In the past thirty-six years of market history. It seems, therefore, at least worth examining what the ability to rally approximately 5 over a week and a half meant during the course of those previous six declines. If one looks only at the first four drops In question, those of 1946, 1957, 1961-62 and 1966, it is easy to become convinced that recent action Is encouraging Indeed. In the course of these declines, there was noadvance of as much as 5 until such'time as they had largely run their course. (In the latter two cases, a 5 advance occurred before, but fairly close to, the ultimate bottom). The most recent two bear markets, however, tell a different story Indeed. During the course of the 196870 downswing, during which the Dow dropped 45, there were four advances of 5 or more, and three of these were quite protracted, lasting for 54,73 and 47 trading days, respectively. The record of the most recent bear market, that of 1973-74, Is even more discouraging. That one,whlch reached Its high of 1051. 70 In January, 1973 and Its low of 577.60 on December 6, 1974,included no fewer than 13 flve-percent-or-greater advances. Most of these were of rather short duration, but at least one, – that of August-October; 1973; lasted 46 trading' days .'Ori tliis most recent record, It\votild -seem 'ad– vlsable to do less than wax ecstatic over a 5 1/2, shorter-than-two-week rally. We are, therefore, loath to do so, yet on the record, as we have suggested, the doctrine that the market will go up If It goes up is not all that bad. It Is worth remembering that each of the 20 declines referred to above were followed by advances ranging In amplitude from 32 to 354. If the present short-term rally can prove Itself by advancing to significant further new highs or by extendIng itself in time appreciably, the upside prospects will be worthwhile Indeed. We are perfectly w!llIng In this Instance to accept the premise that strength begets strength. Dow-Jones Industrials (1200 p.m.) S & P CompOSite (1200 p. m.) Cumulative Index (11/17/77) AWT/jb 836.54 95.30 665.75 ANTHONY W. TABELL DELAFIELD, HARVEY, TABELL No statement or expression of Opinion or any other metier herem contClined IS, or IS to be deemed to be, directly or indirectly, on offer or the soliCitation of on offer to buy or sell any security referred fa or mentioned The motter IS presented merely for the convePlenceJ of the subscriber. While we believe the sources of our Informa tlon to be rehable. we 1(1 no way represent or guarantee the accuracy thereof nor of the statements ml,lde herein Any action fa be talen by the subSCriber should be based on hiS own Investigation and ,nformation Janney Montgomery Seott. Inc. as a corporohon, and Its officers or employees, may now have. or may later toke, posItions Of trades In respect to ony secuflhes menllaned In thiS or any future Issue, and such POSltlOr'l may be different from any views now or hereofter eo;pressed m thiS or any other Issue Janney Montgomery Seoll. Inc, which IS registered With the SEC as on ,vestment adVisor, may give adce to Its Investment adVisory and othel customers mdependently of any statements made In thiS or In any other Issue Further information on any seCtHIty mentioned herein 15 available on request 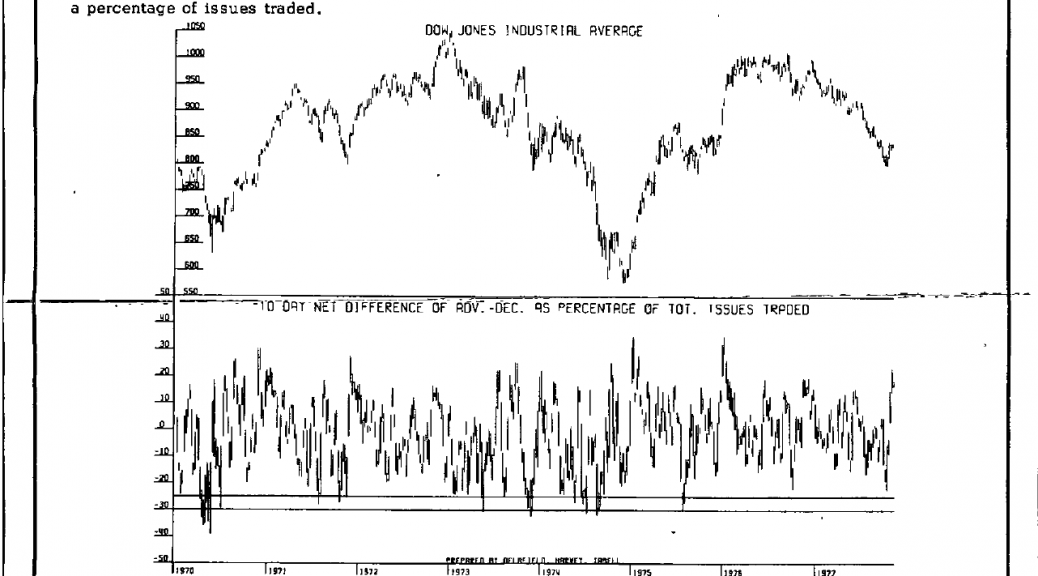 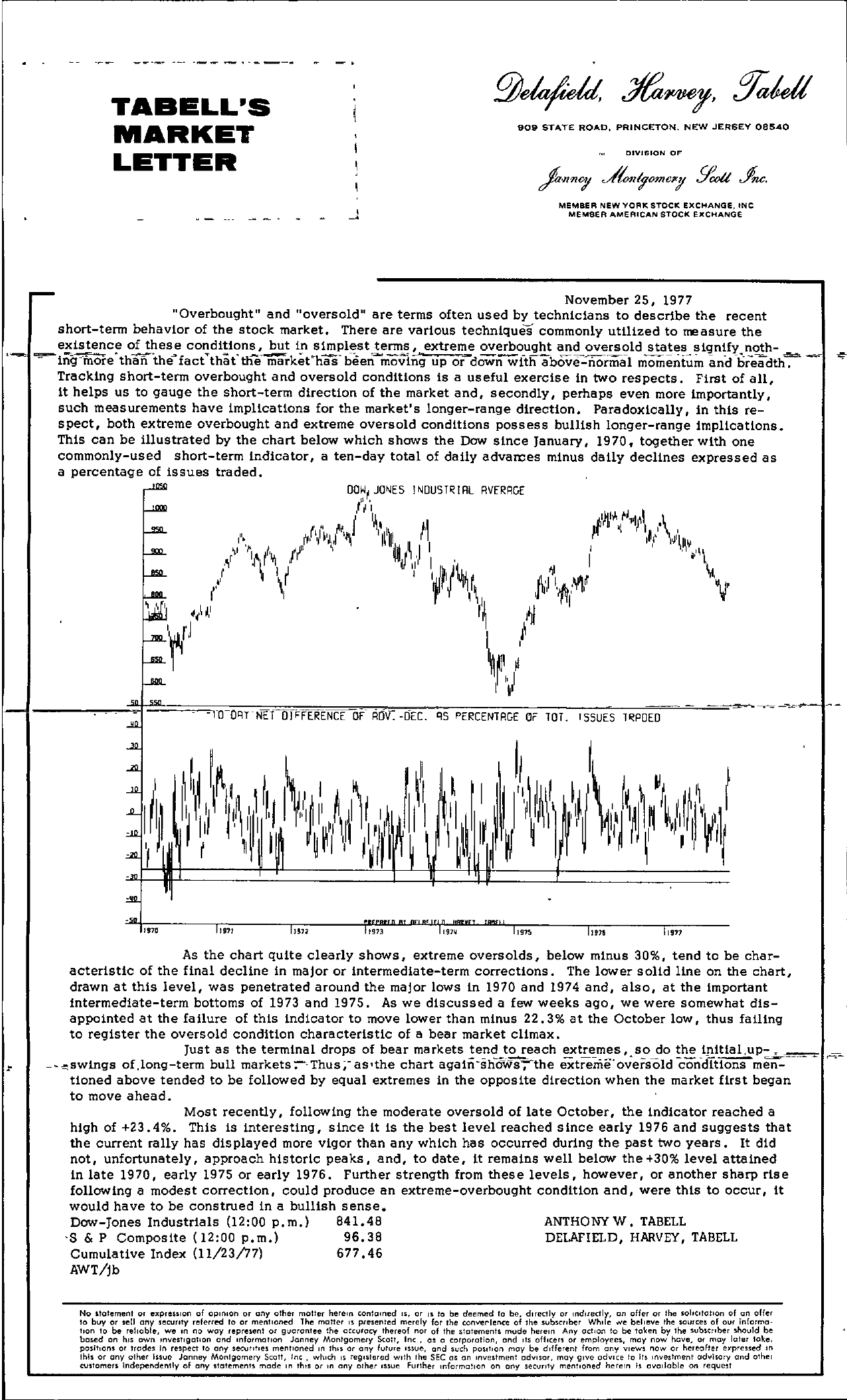 —————-, TABELL'S MARKET LETTER ., 909 STATE ROAD, PRINCETON, NEW JERSEY 08540 , DIVISION OF MEMBER NEW YORk STOCK eXCHANGE, INC MEMBER AMERICAN STOCK eXCHANGE November 25, 1977 Overbought and oversold are terms often used by technicians to describe the recent short-term behavior of the stock market. There are various techniques commonly utilized to measure the existence of these conditions, but In simplest terms, extreme overbought and oversold states signify noth, – -Ing-inore'thafithe fact'that the-markeCh-as- b;eninoving up or downwlthahOvenDrmal momentum and Yireadth. Tracking short-term overbought and oversold conditions Is a useful exercise In two respects. First of all, It helps us to gauge the short-term direction of the market and, secondly, perhaps even more Importantly, such measurements have Implications for the market's longer-range direction. Paradoxically, In this respect, both extreme overbought and extreme oversold conditions possess bullish longer-range Implications. this can be Illustrated by the chart below which shows the Dow since January, 1970. together with one commonly-used short-term Indicator, a ten-day total of dally advarces minus dally declines expressed as a percentage of Issues traded. — ——!'.;;'r;o;O;r;;N;E-T;O-P;'F;E;R;EN;CEOF-RO-V. ;OE-C-. -Q;SP;ER-C;EN;T;RGE OF-;TO;T;.-IS-SU;ES;;T-;P-OE;O-;- -. o III 1/ III Id '\ h I … ' . 1'9) 11511 1'973 1191 1916 11911 As the chart quite clearly shows, extreme oversolds, below minus 30, tend to be char- acteristic of the final decline In major or Intermediate-term corrections. The lower solid line on the chart, drawn at this level, was penetrated around the major lows In 1970 and 1974 and, also, at the Important Intermediate-term bottoms of 1973 and 1975. As we discussed a few weeks ago, we were somewhat dis- appOinted at the failure of this Indicator to move lower than minus 22.3 at the October low, thus failing to register the oversold condition characteristic of a bear market climax. ,. Just as the terminal drops of bear markets tend to reach extremes, so do the Initial ,up- . . swings of ,long-term bull markets ;-'Thus;' as,the chart again 'shdWthe extreme' oversold con'dTt!OnSmen— tloned above tended to be followed by equal extremes In the opposite direction when the market first began to move ahead. Most recently, following the moderate oversold of late October, the Indicator reached a high of 23.4. This Is Interesting, since It Is the best level reached since early 1976 and suggests that the current rally has displayed more vigor than any which has occurred during the past two years. It did not, unfortunately, approach historic peaks, and, to date, It remains well below the 30 level attained In late 1970, early 1975 or early 1976. Further strength from these levels, however, or another sharp rise following a modest correction, could produce an extreme-overbought condition and, were this to occur, It would have to be construed In a bullish sense. DOW-Jones Industrials (1200 P. m.) 841.48 -s & P CompOSite (1200 p.m.) 96.38 ANTHONY W. TABELL DELAFIELD, HARVEY, TABELL Cumulative Index (11/23/77) 677.46 AWT/jb No stalement or expPl!Slon of opinion or any other moiler herein contOlned IS, or IS to be deemed to be, directly or indirectly, on offer or Ihe sol'C.lal,on of on offer 10 buy or sell any security referred 10 or menl,oned The molter , presented merely for Ihe converlencc of the subsctlber While -Ne believe the sources of ovr informa- lion to be reliable, we In no way represent or gvarantee Ihe accuracy thereof nor of Ihe statements mode herein Any act,on 10 be loken by the subscllber should be based on hiS own investigation and ,formation Janney Montgomery Scali, Inc, os 0 corporation, ond ,Is offICers or employees, may now have, or may later lake, posll,on5 or trades In respect to any seuntles mentioned In thiS or any future Issue, ond such pOSit' on may be different from any views now or hereafter el'pressed In this or any olner Issue Janney Montgomery Scoll, Inc, wnlch IS registered wltn the SEC as on Investment adVISor, may give adVIce to Its ,nvestment advisory and otnel customers Independently of any stalemenis mode In th.s or In any otner Issue Further information on any security mentioned herein Is available on request