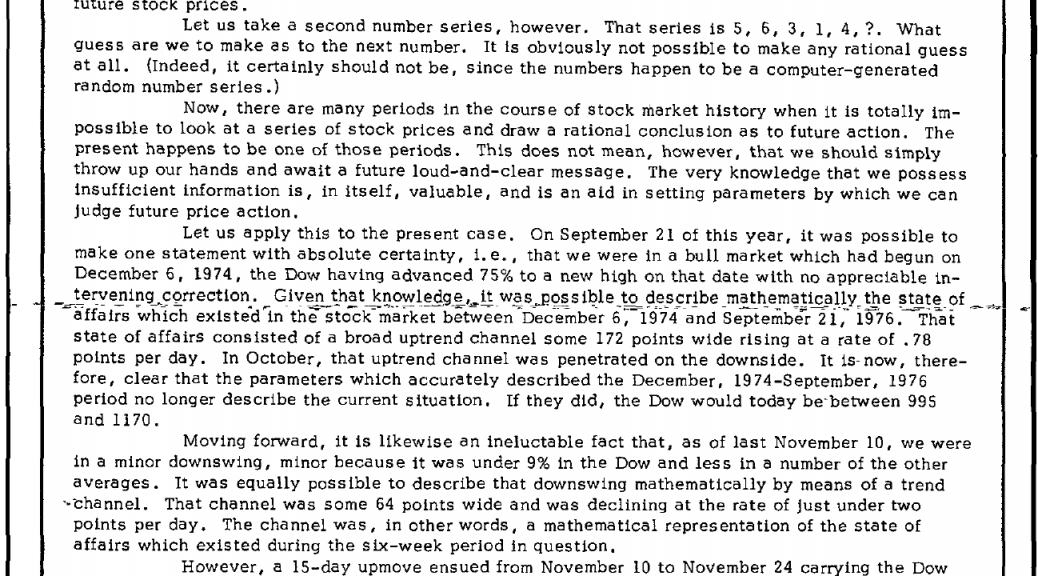 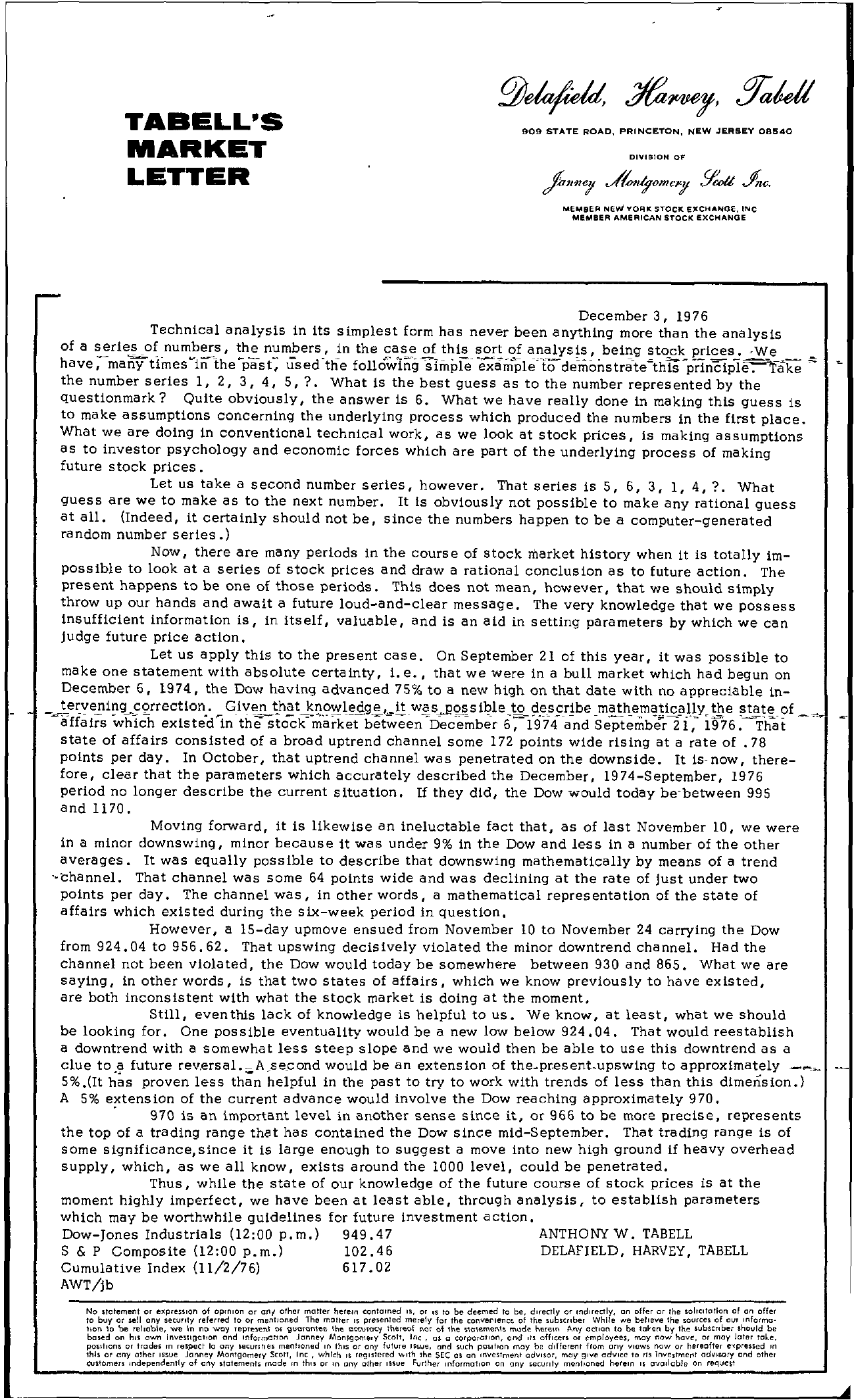 TABELL'S MARKET LETTER 909 STATE ROAD, PRINCETON, NEW JERSEY 08540 DIVISION OF MEMBER New' VOAK STOCK EXCHANGE, INC MEMBER AMERICAN STOCK eXCHANGE December 3, 1976 Technical analysiS in its simplest form has never been anything more than the analysis of a series of numbers, the numbers, in the case of this sort of analysis, being stock prices. -We exampl,,–tQhave;-manytlmes-iil-the -past used'tlle followlngslmpte- decriionstra-tethls -p-rrncipe-Take ,.. the number series 1, 2, 3,4, 5, What is the best guess as to the number represented by the questionmark Quite obviously, the answer is 6. What we have really done in making this guess is to make assumptions concerning the underlying process which produced the numbers in the first place. What we are doing in conventional technical work, as we look at stock prices, is making assumptions as to investor psychology and economic forces which are part of the underlying process of making future stock prices. Let us take a second number series, however. That series is 5, 6, 3, 1,4, What guess are we to make as to the next number. It is obviously not possible to make any rational guess at all. (Indeed, it certainly should not be, since the numbers happen to be a computer-generated random number series.) Now, there are many periods in the Course of stock market history when it is totally im- possible to look at a series of stock prices and draw a rational conclusion as to future action. The present happens to be one of those periods. This does not mean, however, that we should simply throw up our hands and await a future loud-and-clear message. The very knowledge that we possess insufficient information is, in itself, valuable, and is an aid in setting parameters by which we can judge future price action. Let us apply this to the present case. On September 21 of this year, it was possible to make one statement with absolute certainty, 1. e., that we were in a bull market which had begun on December 6, 1974, the Dow having advanced 75 to a new high on that date with no appreciable in- – – tervening correction. Given that knowledge,i! was possible to describe mathematically the state of C-affairs whlc-h existed-in the stOck- ari-tbetweEnDec-embr 6;1974a-nd Septmbr2 1976 That – . state of affairs consisted of a broad uptrend channel some 172 points wide rising at a rate of .78 pOints per day. In October, that uptrend channel was penetrated on the downSide. It Is, now, there- fore, clear that the parameters which accurately described the December, 19 74-September, 1976 period no longer describe the current situation. If they did, the Dow would today be'between 995 and 1170. Moving forward, it is likewise an ineluctable fact that, as of last November 10, we were in a minor downswing, minor because it was under 9 in the Dow and less in a number of the other averages. It was equally possible to describe that downswing mathematically by means of a trend -channel. That channel was some 64 pOints wide and was declining at the rate of just under two points per day. The channel was, in other words, a mathematical representation of the state of affairs which existed during the six-week period in question. However, a l5-day upmove ensued from November 10 to November 24 carrying the Dow from 924.04 to 956.62. That upswing decisively violated the minor downtrend channel. Had the channel not been Violated, the Dow would today be somewhere between 930 and 865. What we are saying, in other words, is that two states of affairs, which we know previously to have existed, are both inconsistent with what the stock market is doing at the moment. Still, even this lack of knowledge is helpful to us. We know, at least, what we should be looking for. One possible eventuality would be a new low below 924.04. That would reestablish a downtrend with a somewhat less steep slope and we would then be able to use this downtrend as a clue to a future rev.ersal. Ase,cond would be an extension of the.pr.esent,upswing to approximately … 5.(It hs proven less th;;n helpful in the past to try to work with trends of less than this dimension.) A 5 extension of the current advance would involve the Dow reaching approximately 970. , 970 is an important level in another sense since it, or 966 to be more precise, represents the top of a trading range that has contained the Dow since mid-September. That trading range is of SOme significance,since it is large enough to suggest a move into new high ground if heavy overhead supply, which, as we all know, exists around the 1000 level, could be penetrated. Thus, while the state of our knowledge of the future course of stock prices is at the moment highly imperfect, we have been at least able, through analysis, to establish parameters which may be worthwhile guidelines for future investment action. Dow-Jones Industrials (1200 p.m.) 949.47 S & P CompOSite (1200 p.m.) 102.46 ANTHONYW. TABELL DELAFIELD, HARVEY, TABELL Cumulative Index (1l/2/76) 617.02 AWT/jb No 'Iclement or expression of Opinion or ont' olhcr matter herein contarned IS, or IS to be deemed 10 be, dIrectly or indirectly, on offer or the sohcltatlon of an offer 10 buy or sell any security referred 10 or mentIOned The matter IS presented merely for the converlenCt of the subscriber While we believe Ihe sources of ovr information 10 be reliable, we In no way repre-en! or 9\Joranle toe occurccy thereof r.or 01' Ine '!.lolemel'\l.. mucie herel At'ly cctiOn. to be taen. by the subSCriber should be based on hiS own InvesligatlOn and lI'lformotlOn Janney Monlgamery Scolt, Inc, as a corporotlOn, and lIs officers or employees, may now have, or may Jaler tole, pOSitions or trades In respect to any CVTltles menlloned j(\ Ihls or ony future Issue, an.d such pOSition may be different from any Views now or hereafter epressed In Inls or any other Issue Janney Montgomery Scolt, Inc, which IS registered v,,,ln the SEC as an InVestment adVisor, may give ad….,ce to Its investme.,t adVISOry and olhel customers Independently of any slotemenls made In thiS or In any other Issue Further information on ony security mentioned herein IS ovallob!e on request 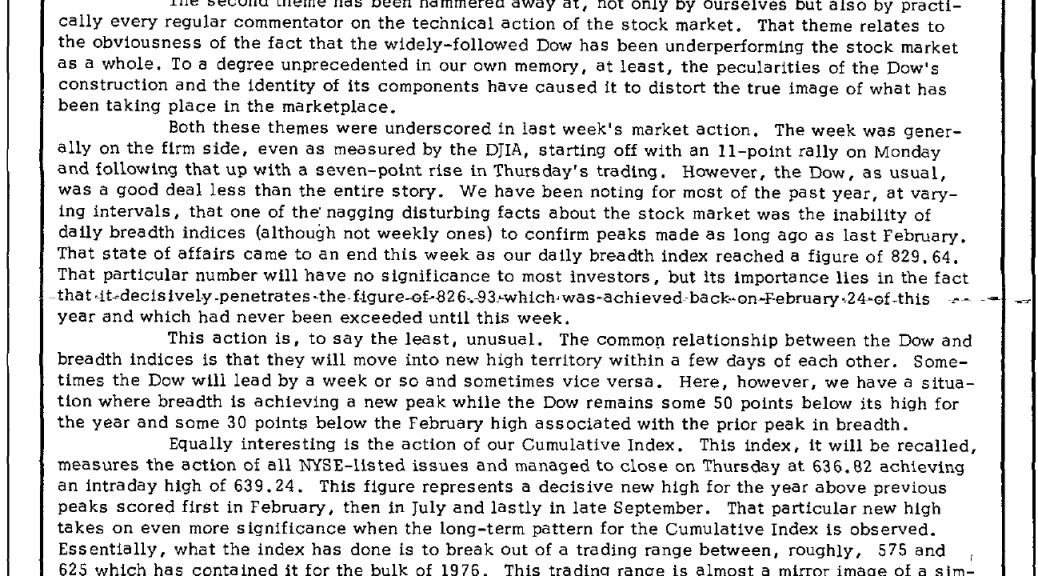 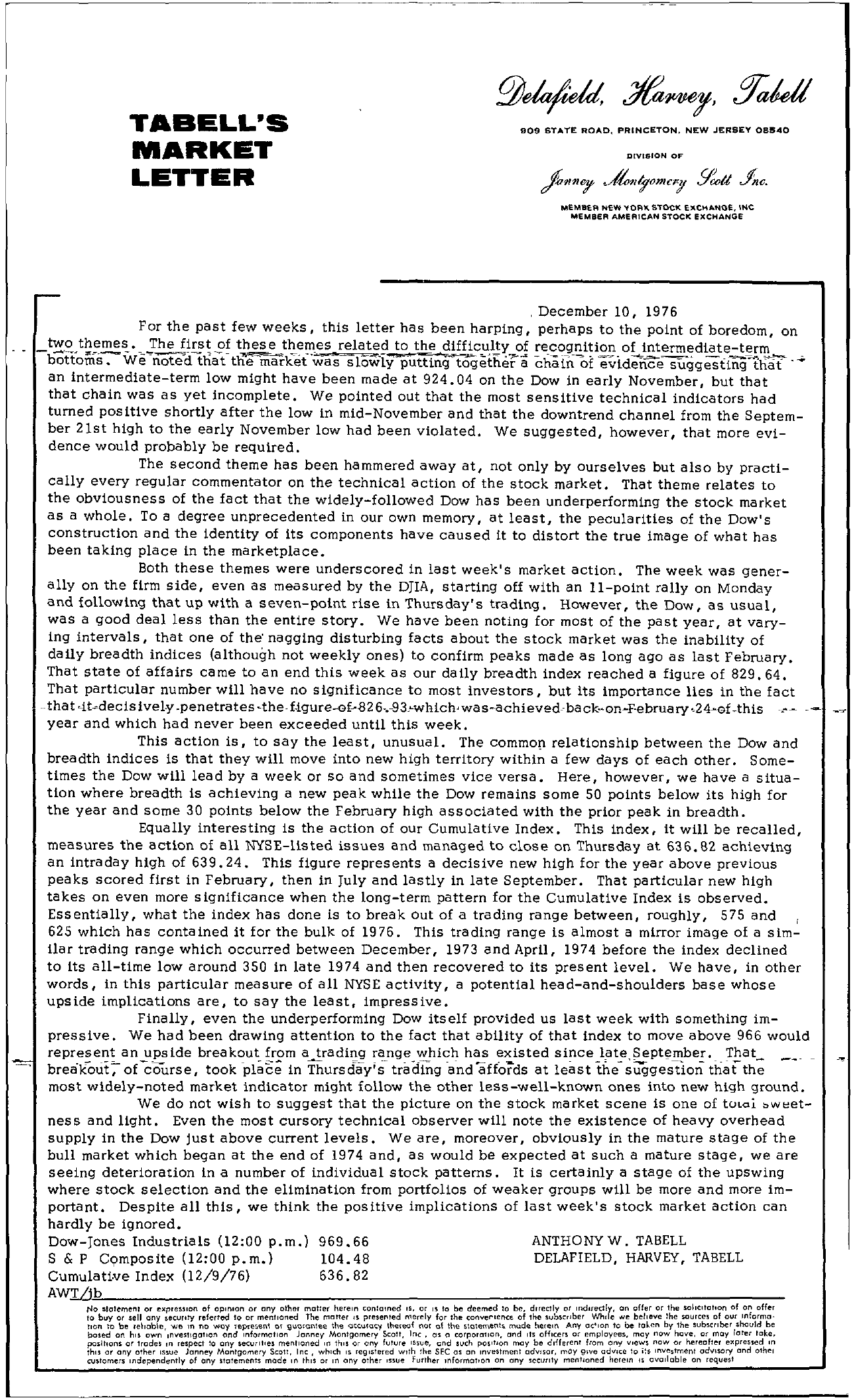 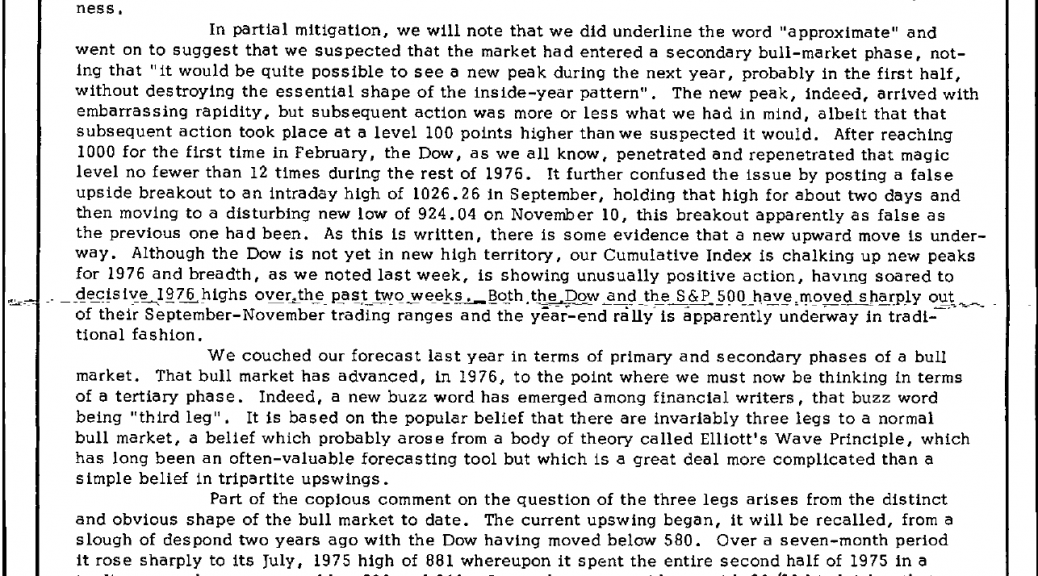 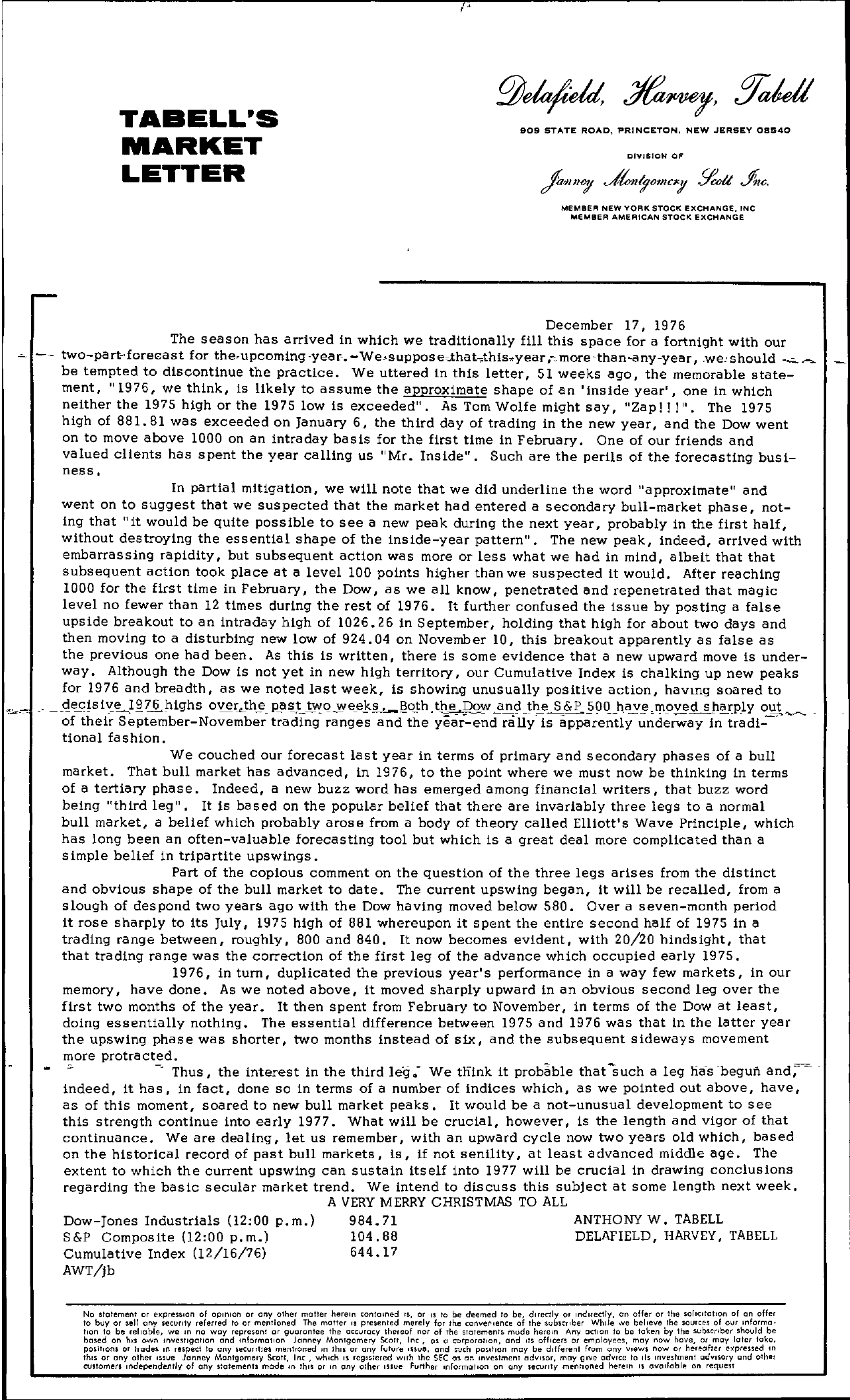 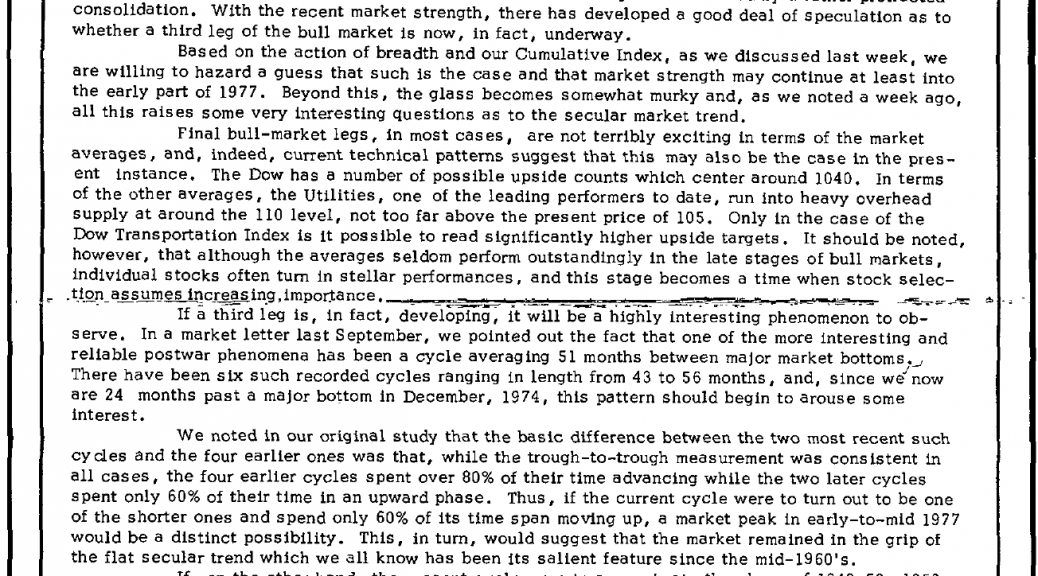 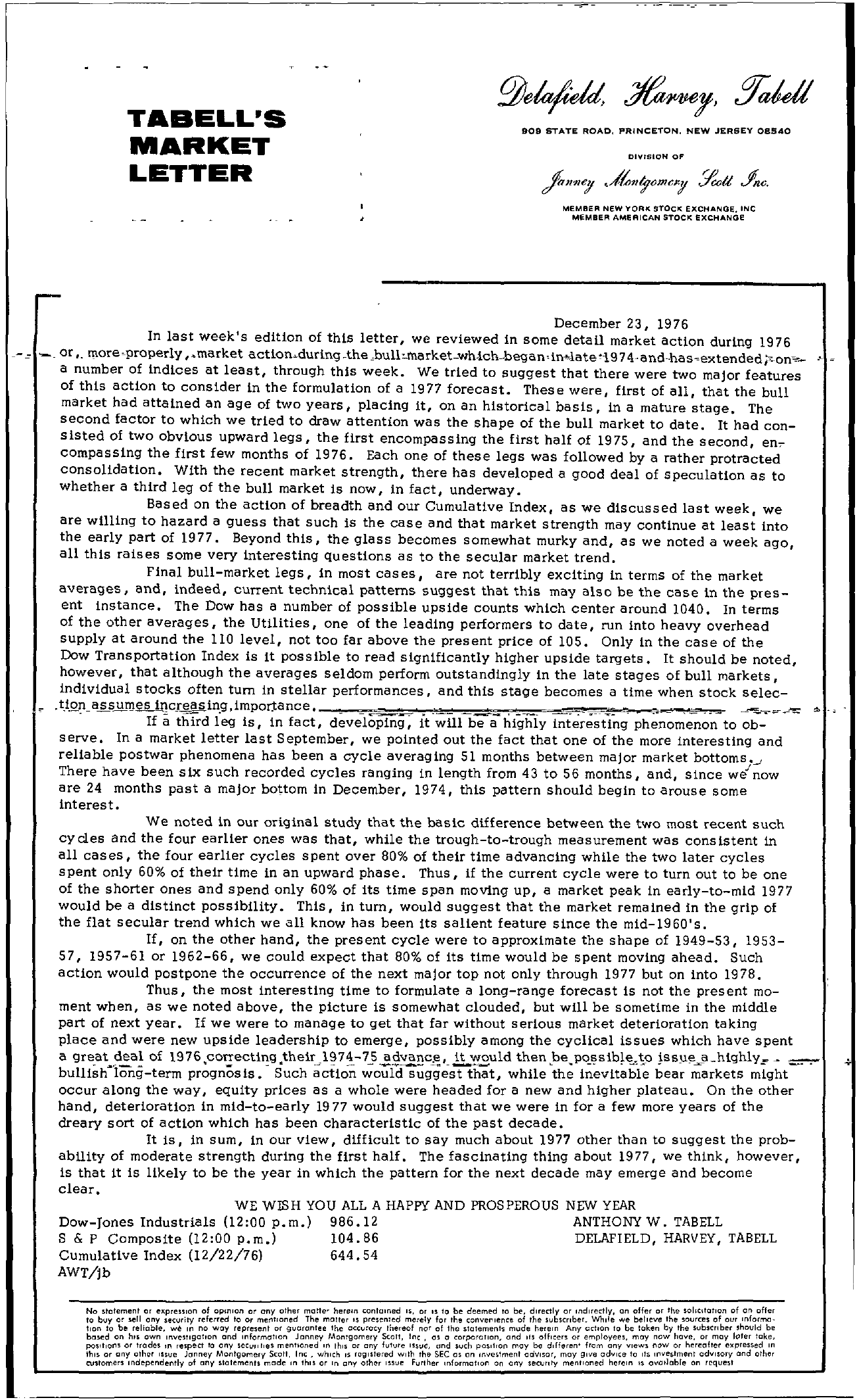 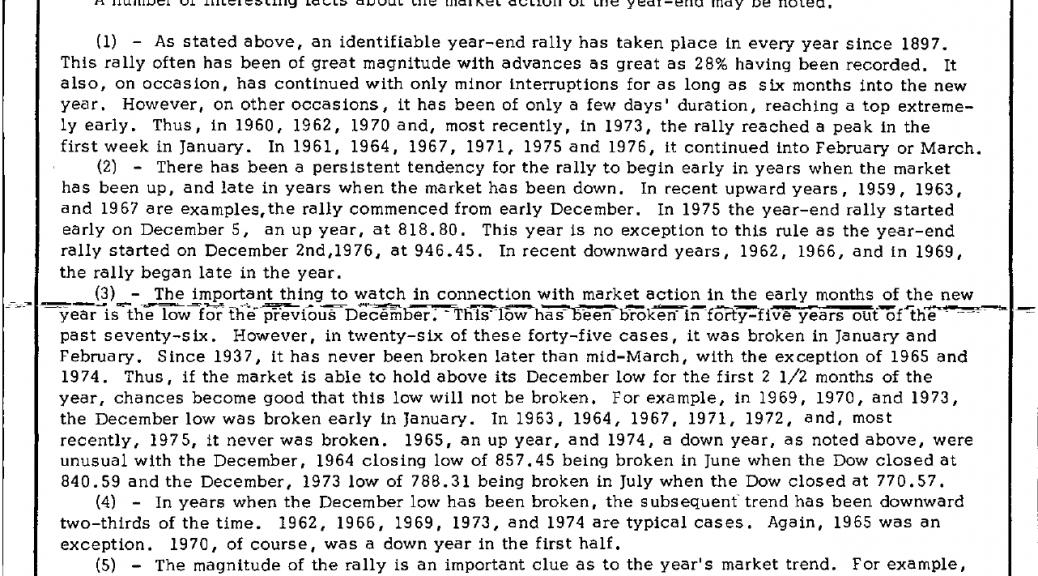 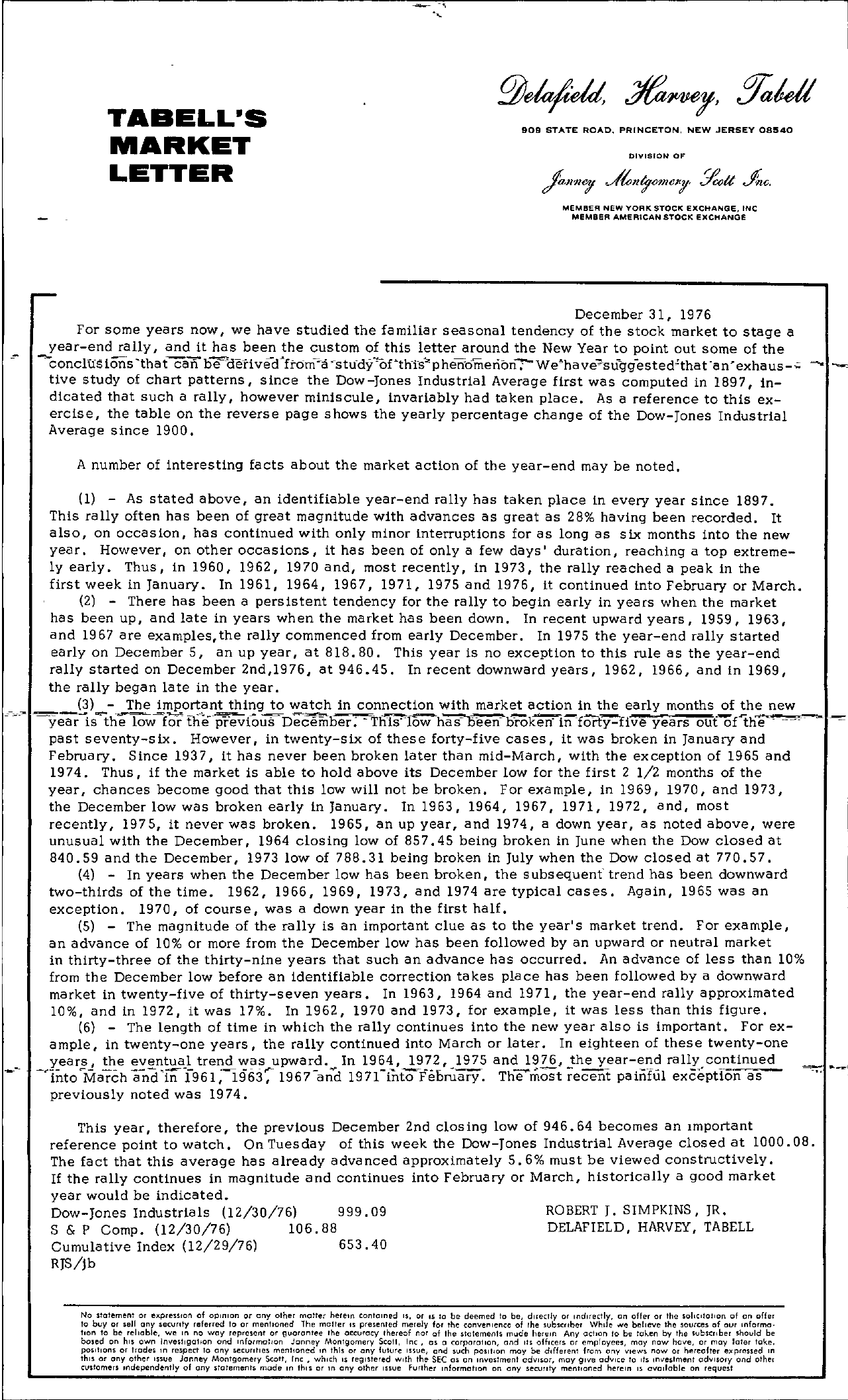 TABELL'S MARKET LETTER 909 STATE ROAD. PRINCETON. NEW JERSEY 08540 DIYISION OF MEMBER NEW YORK STOCK EXCHANGE, tNC MEMBER AMERICAN STOCK EXCHANGE December 31, 1976 For some years now, we have studied the familiar seasonal tendency of the stock market to stage a ,- year-end rally, and it has been the custom of this letter around the New Year to point out some of the -conclus iOns thatCan bYderived'ftomOa stu-dyOf'thfs p hen-Omerion;- We'ha vesuggested'that -an' exha us- tive study of chart patterns, since the Dow-Jones Industrial Average first was computed in 1897, in- dicated that such a rally, however miniscule, invariably had taken place. As a reference to this ex- ercise, the table on the reverse page shows the yearly percentage change of the Dow-Jones Industrial Average since 1900. A number of interesting facts about the market action of the year-end may be noted. (1) – As stated above, an identifiable year-end rally has taken place in every year since 1897. This rally often has been of great magnitude with advances as great as 28 having been recorded. It also, on occasion, has continued with only minor interruptions for as long as six months into the new year. However, on other occasions, it has been of only a few days' duration, reaching a top extreme- ly early. Thus, in 1960, 1962, 1970 and, most recently, in 1973, the rally reached a peak in the first week in January. In 1961, 1964, 1967, 1971, 1975 and 1976, it continued into February or March. (2) – There has been a persistent tendency for the rally to begin early in years when the market has been up, and late in years when the market has been down. In recent upward years, 1959, 1963, and 1967 are examples, the rally commenced from early December. In 1975 the year-end rally started early on December 5, an up year, at 818.80. This year is no exception to this rule as the year-end rally started on December 2nd,1976, at 946.45. In recent downward years, 1962, 1966, and in 1969, the rally began late in the year. (3) – The important thing to watch in connection with market action in the early months of the new C'- yearisthelOwfor the pl'evfoiiIl'DeCeinber; – ThTslow has- been- bi'Oken- infOFtYIive years ouiofthe – -.-. ….., past seventy-six. However, in twenty-six of these forty-five cases, it was broken in January and February. Since 1937, it has never been broken later than mid-March, with the exception of 1965 and 1974. Thus, if the market is able to hold above its December low for the first 2 1/2 months of the year, chances become good that this low will not be broken. For example, in 1969, 1970, and 1973, the December low was broken early in January. In 1963, 1964, 1967, 1971, 1972, and, most recently, 1975, it never was broken. 1965, an up year, and 1974, a down year, as noted above, were unusual with the December, 1964 closing low of 857.45 being broken in June when the Dow closed at 840.59 and the December, 1973 low of 788.31 being broken in July when the Dow closed at 770.57. (4) – In years when the December low has been broken, the subsequent trend has been downward two-thirds of the time. 1962, 1966, 1969, 1973, and 1974 are typical cases. Again, 1965 was an exception. 1970, of course, was a down year in the first half. (5) – The magnitude of the rally is an important clue as to the year's market trend. For example, an advance of 10 or more from the December low has been followed by an upward or neutral market in thirty-three of the thirty-nine years that such an advance has occurred. An advance of less than 10 from the December low before an identifiable correction takes place has been followed by a downward market in twenty-five of thirty-seven years. In 1963, 1964 and 1971, the year-end rally approximated 10, and in 1972, it was 17. In 1962, 1970 and 1973, for example, it was less than this figure. (6) – The length of time in which the rally continues into the new year also is important. For ex- ample, in twenty-one years, the rally continued into March or later. In eighteen of these twenty-one . – ye a rs, t he eventual- – trend w- -as u- rT- pward..,. In 196… 4.., 197 2 , -1.975 and1976.. -. , t he y e a r – end rally,1 continued into March and in 1961, 1963, 1967 and 1971 into February. The most recent painful exception as ,-, previously noted was 1974. This year, therefore, the previous December 2nd closing low of 946.64 becomes an Important reference point to watch. On Tuesday of this week the Dew-Jones Industrial Average closed at 1000.08. The fact that this average has already advanced approximately 5.6 must be viewed constructively. If the rally continues in magnitude and continues into February or March, historically a good market year would be indicated. Dow-Jones Industrials (12/30/76) 999.09 S & P Compo (12/30/76) 106.88 ROBERT J. SIMPKINS, JR. DELAFIELD, HARVEY, TABELL Cumulative Index (12/29/76) 653.40 RJS/lb No statement or expression of opInion or any olner motter herein contolned IS, or IS to be deemed to be, directly or Indirectly, on offer or the 50llclloIIOn of on offer 10 buy or sell any security referred 10 or menlloned The motter IS presented merely for the convef'lence of the subscriber While 'e believe the sources of Olr Information to be reliable, we In no way represent or guarantee the occuracy thereof nor of the statements mude herein Any achon to be laen by the subSCriber should be based on hiS own InvestigatIOn and Information Janney Montgomery Scott, Inc, 05 a corporation, and Its offuers or employee may now have, or moy later take. pOSitions or trades In respect to any seCUrities mentioned 1fl this or ony future Issue, and such pOSlllon may be different from any views now or hereafter e;pressed In thiS or any other Issue Janney Montgomery Scott, Inc. which IS registered With the SEC (15 on Investment adVisor, may give adVice to Its Investment adVisory ond other customers Independently of any stalements made In thIS or 111 ony other Issue Further Information on any security menltoned herein IS ovollable on request