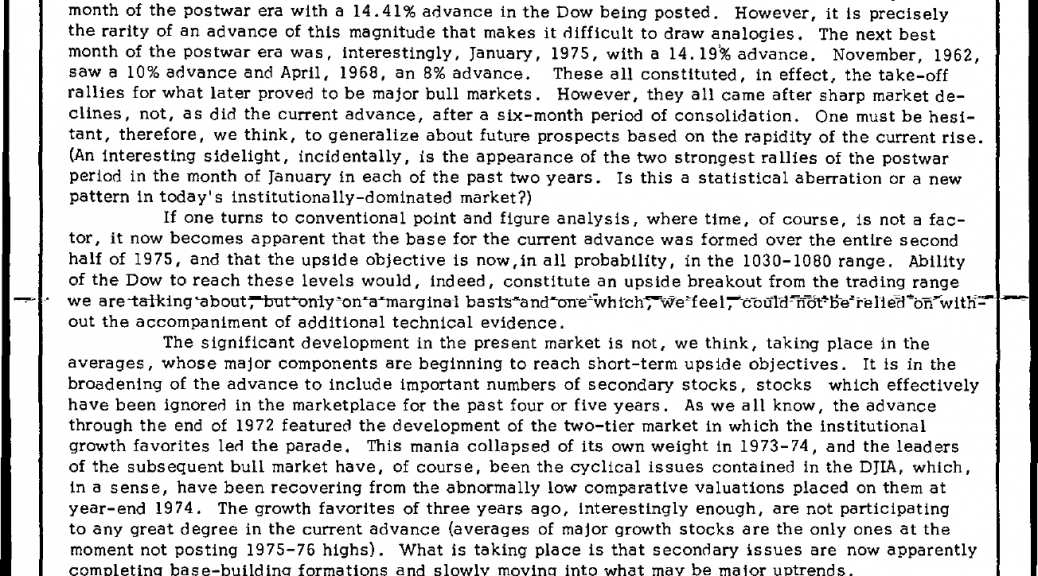 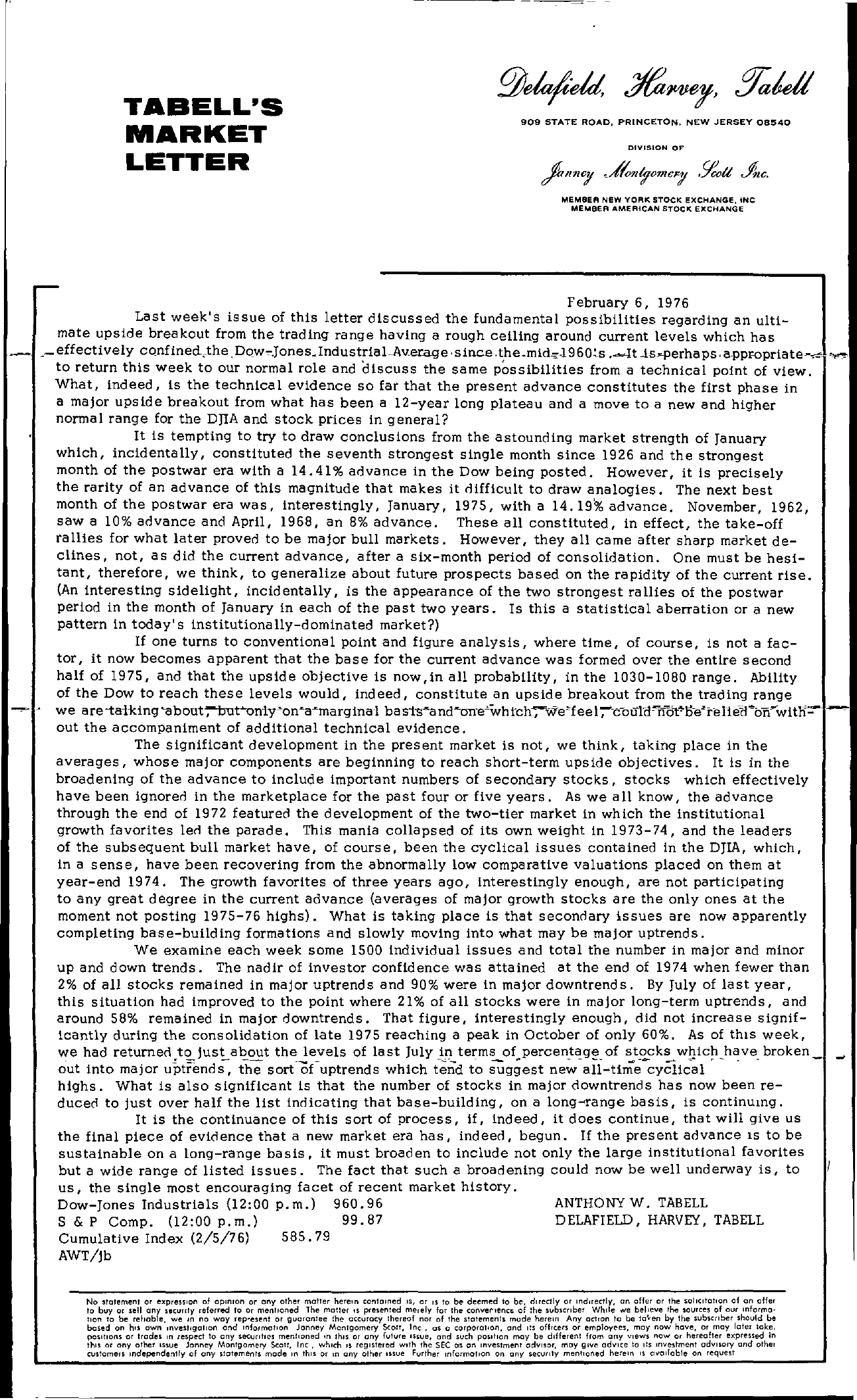 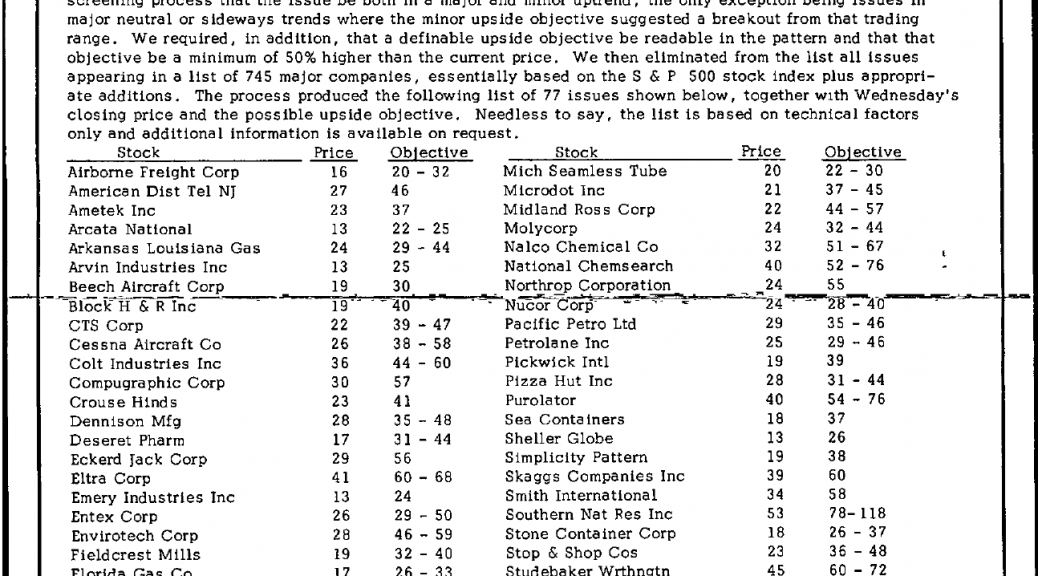 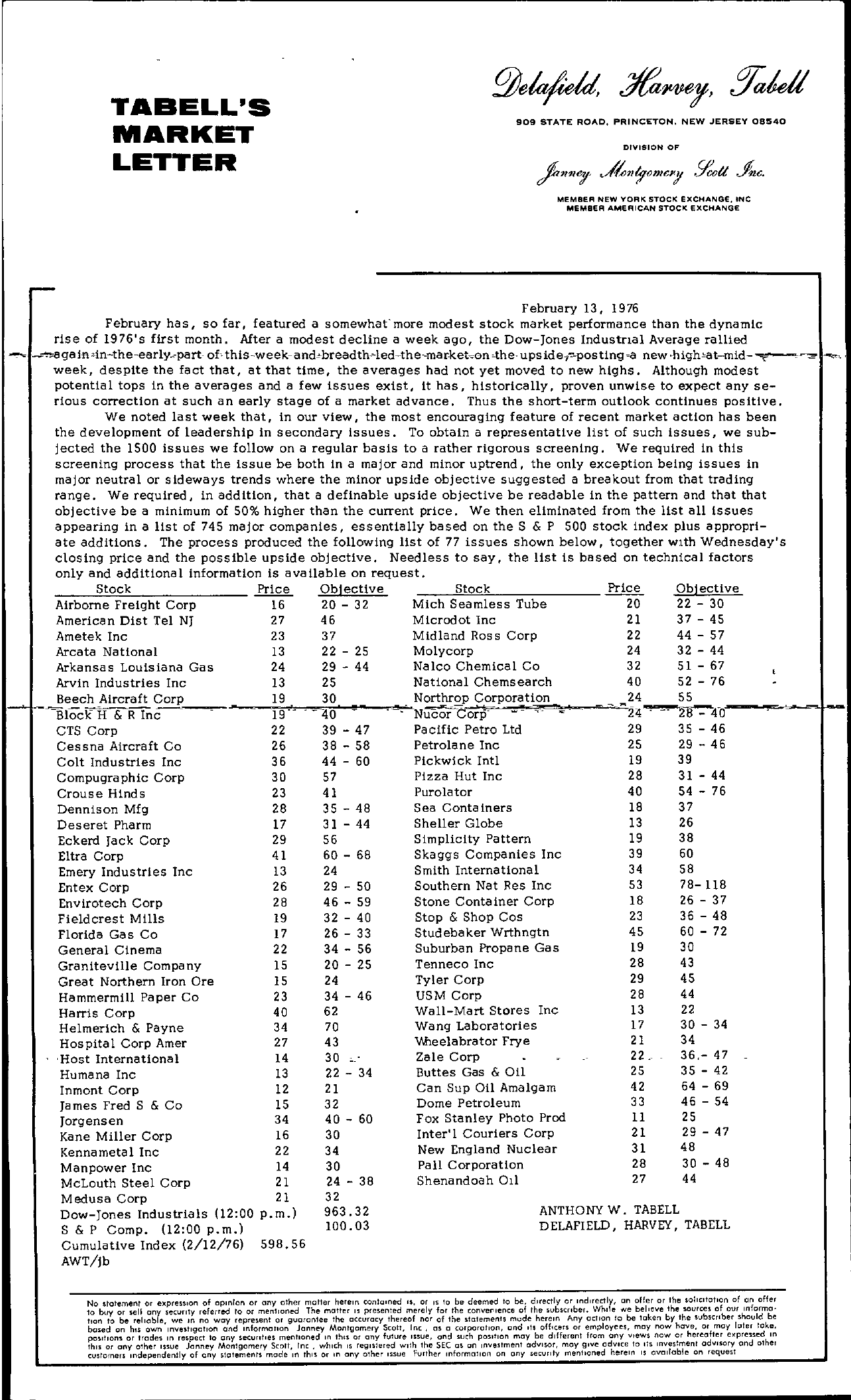 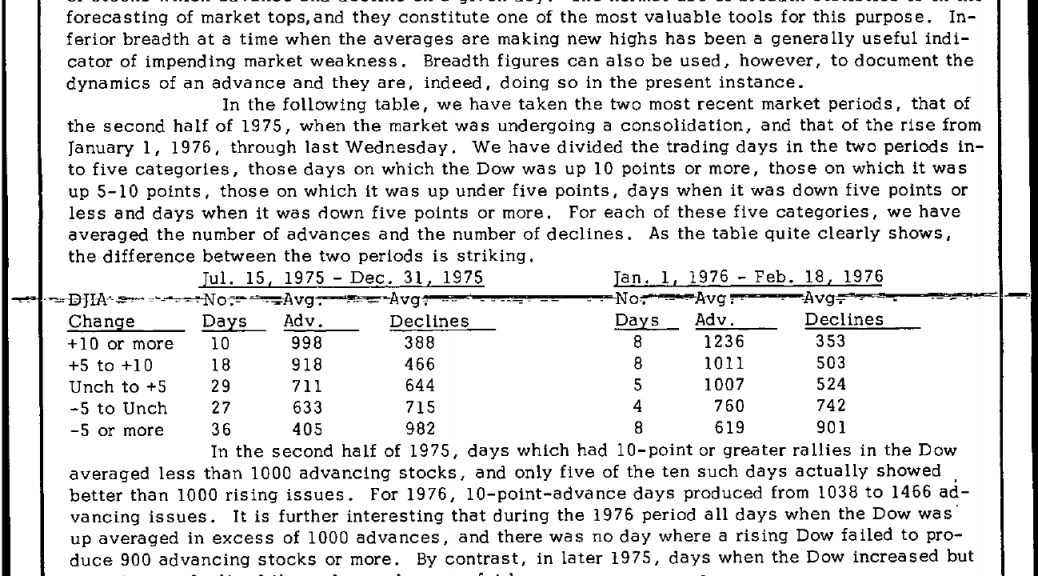 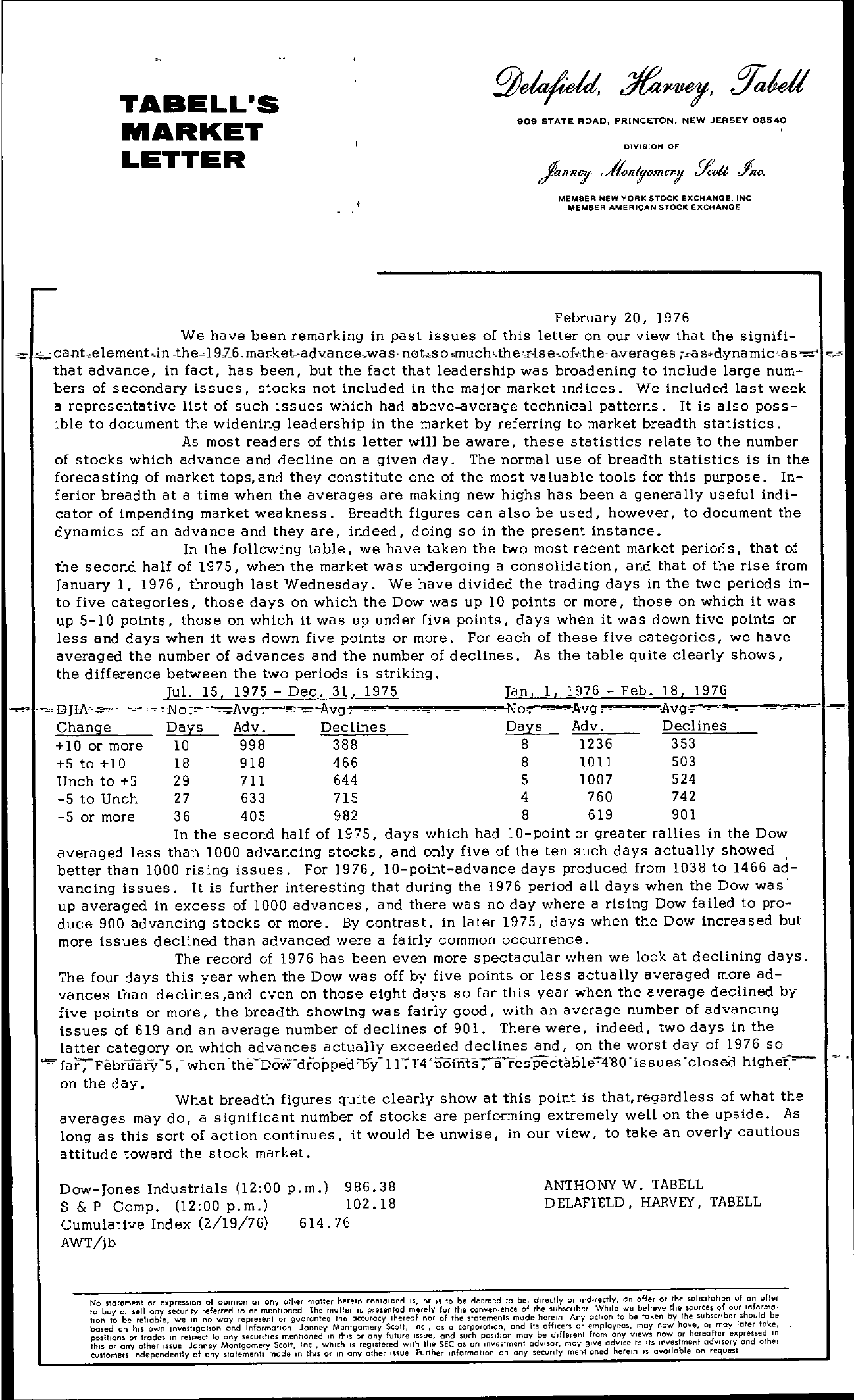 TABELL'S MARKET LETTER 909 STATE ROAD, PRINCETON, NEW JERSEY 08540 DIVIStON OF MEMBER NEW YORK STOCK eXCHANGE. INC MEMBER AMERICAN STOCI( eXCHANGE February 20, 1976 We have been remarking in past issues of this letter on our view that the signifi- ca,ntelemenLin -the1976, maketadancewa s- nots ().muGhthe'r-ise,of,the, a,verages,,a s.dynamic',a s that advance, in fact, has been, but the fact that leadership was broadening to include large numbers of secondary issues, stocks not included in the major market mdices. We included last week a representative list of such issues which had above-average technical patterns. It is also possible to document the widening leadership in the market by referring to market breadth statistics. As most readers of this letter will be aware, these statistics relate to the number of stocks which advance and decline on a given day. The norma 1 use of breadth statistics is in the forecasting of market tops,and they constitute one of the most valuable tools for this purpose. Inferior breadth at a time when the averages are making new highs has been a generally useful indicator of impending market weakness. Breadth figures can also be used, however, to document the dynamics of an advance and they are, indeed, doing so in the present instance. In the follOWing table, we have taken the two most recent market periods, that of the second half of 1975, when the market was undergoing a consolidation, and that of the rise from January I, 1976, through last Wednesday. We have divided the trading days in the two periods into five categories, those days on which the Dow was up 10 points or more, those on which it was up 5-10 pOints, those on which it was up under five points, days when it was down five points or less and days when it was clown five points or more. For each of these five categories, we have averaged the number of advances and the number of declines. As the table quite clearly shows, the difference between the two periods is striking. 1……. ,BJIk-…..,kUo1..;;5;;.';;-;D;e;cAAV3g1.',I;;75;….,,.,.,.,.,…,..,,……..,,..,Jka;,I;',IA9V7g;6,;Feb;;.!.1;9;;6…….,..,-,I…. Change 10 or more 5 to 10 Unch to 5 -5 to Unch -5 or more Days Adv. Declines Days Adv. Declines 10 998 388 8 1236 353 18 918 466 8 lOll 503 29 711 644 5 1007 524 27 633 715 4 760 742 36 405 982 8 619 901 In the second half of 1975, days which had 10-point or greater rallies in the Dow averaged less than 1000 advancing stocks, and only five of the ten such days actually showed better than 1000 rising issues. For 1976, 10-point-advance days produced from 1038 to 1466 ad- vancing issues. It is further interesting that during the 1976 period all days when the Dow was' up averaged in excess of 1000 advances, and there was no day where a rising Dow failed to pro- duce 900 advancing stocks or more. By contrast, in later 1975, days when the Dow increased but more issues declined than advanced were a fairly common occurrence. The record of 1976 has been even more spectacular when we look at declining days. The four days this year when the Dow was off by five points or less actually averaged more ad- vances than declines ,and even on those eight days so far this year when the average declined by five points or more, the breadth showing was fairly good, with an average number of advancmg issues of 619 and an average number of declines of 901. There were, indeed, two days in the latter category on which advances actually exceeded declines and, on the worst day of 1976 so far;-February5, – when 'theDow-droppen 'oy-ll-'r4 pofnts76respectaoleif80 'issues'closen higher on the day. What breadth figures quite clearly show at this point is that,regardless of what the averages may do, a Significant number of stocks are performing extremely well on the upside. As long as this sort of action continues, it would be unwise, in our view, to take an overly cautious attitude toward the stock market. Dow- Jones Industrials (12 00 p. m.) 986.38 S & P Compo (1200 p.m.) 102.18 Cumulative Index (2/19/76) 614.76 AWT/jb ANTHONY W. TABELL DELAFIELD, HARVEY, TABELL No stalement Of e)(prcslon of opinion Of ony other molter herein contOlned IS, or 1 10 be deemed 10 be, dHec1ly or IndHectly, on offer Of Ihe sollcltotlon of on offer to buy or sell ony security referred 10 or mentioned The molter IS presenled merely for the converlencs of the subscriber While oNe believe the sources of our informa- tion to be reliable, wc In no way represent or guarantee the accurocy thereof nor of the statements mude herein Any action to be token by Ihe subscriber should be based on hiS own Investlgahon and Information Janney Monlgomery Scoll, Inc, as 0 corporation, ond Its officers or employees, may now have, or may later lake, positions or Irodes In respect to any 5.Ccuntles mentioned In thiS or any future Inue, and such posllion may be different from any views now or hereafter copressed In thiS or any other Issue Janney Montgomery Scolt, Inc, which IS registered With the SEC as on Investment adVisor, may give adVice to 11 Investment odvlsory and other customers Independently of any statements mode In thu or In any other Iue Further information on any security mentioned herein IS available on request 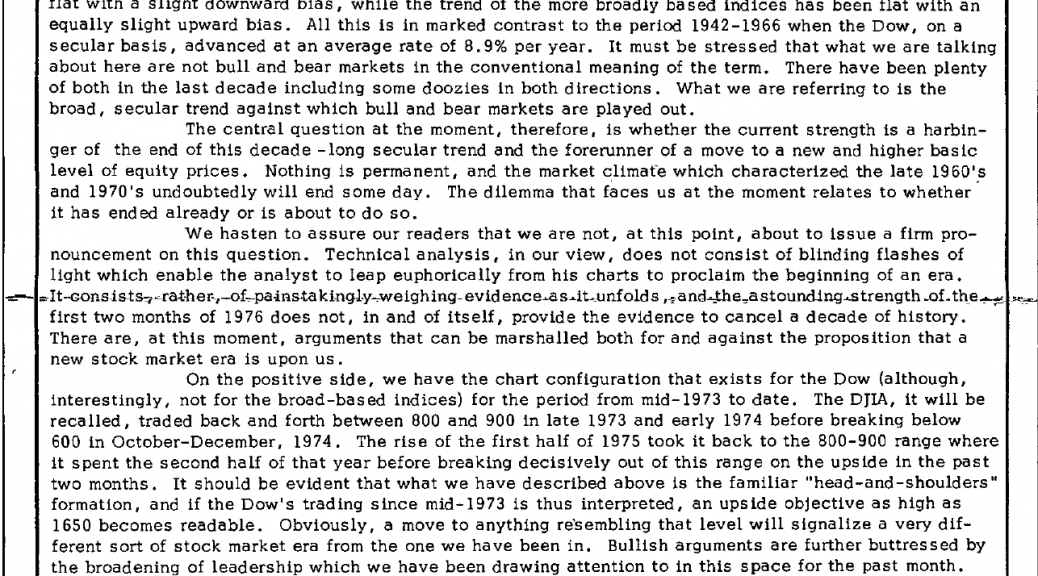 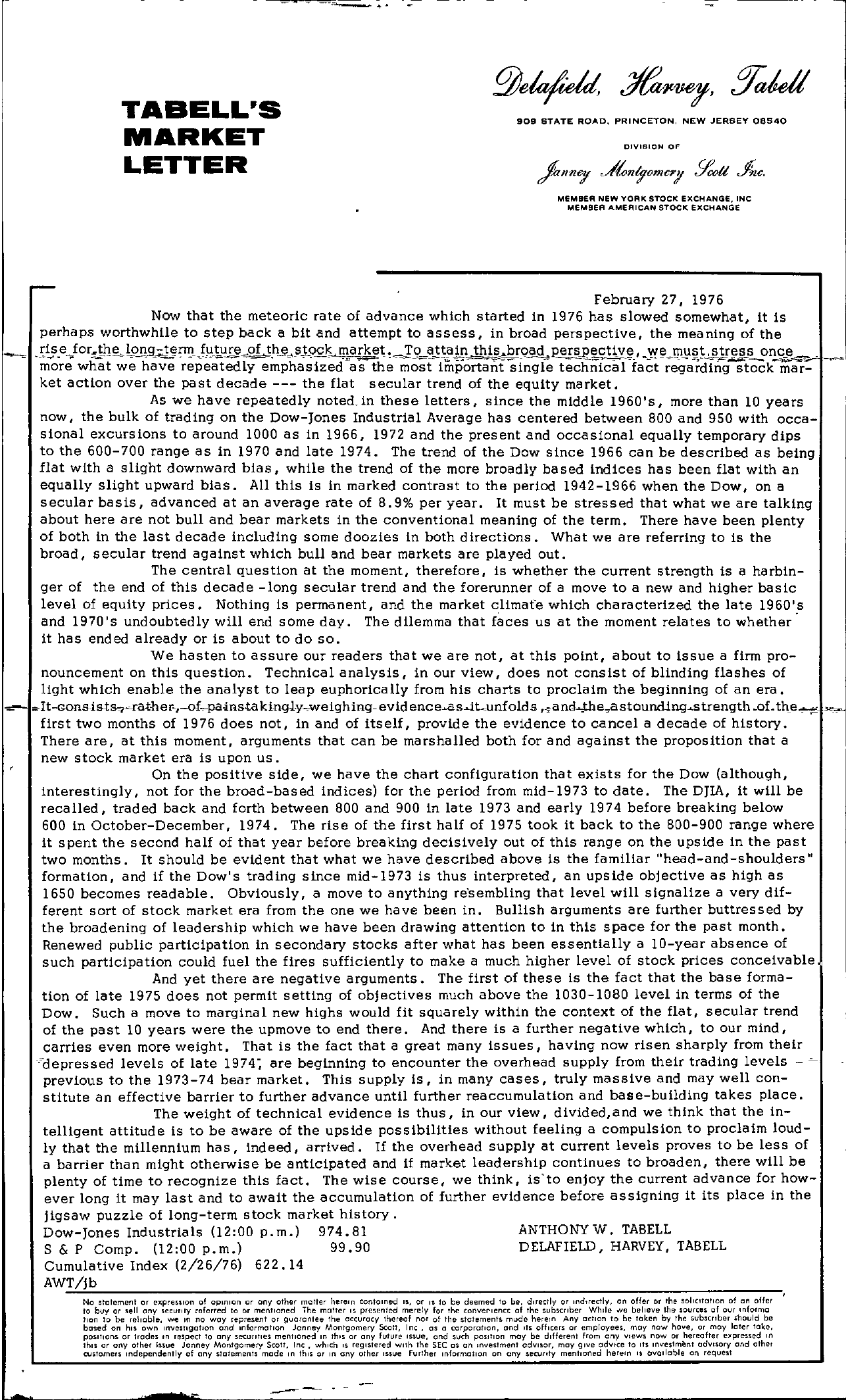