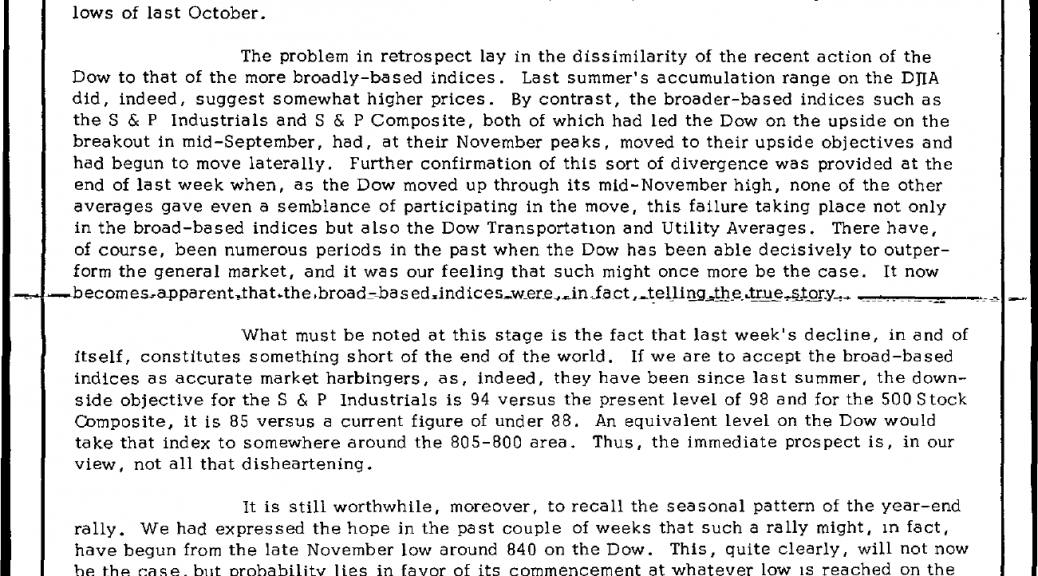 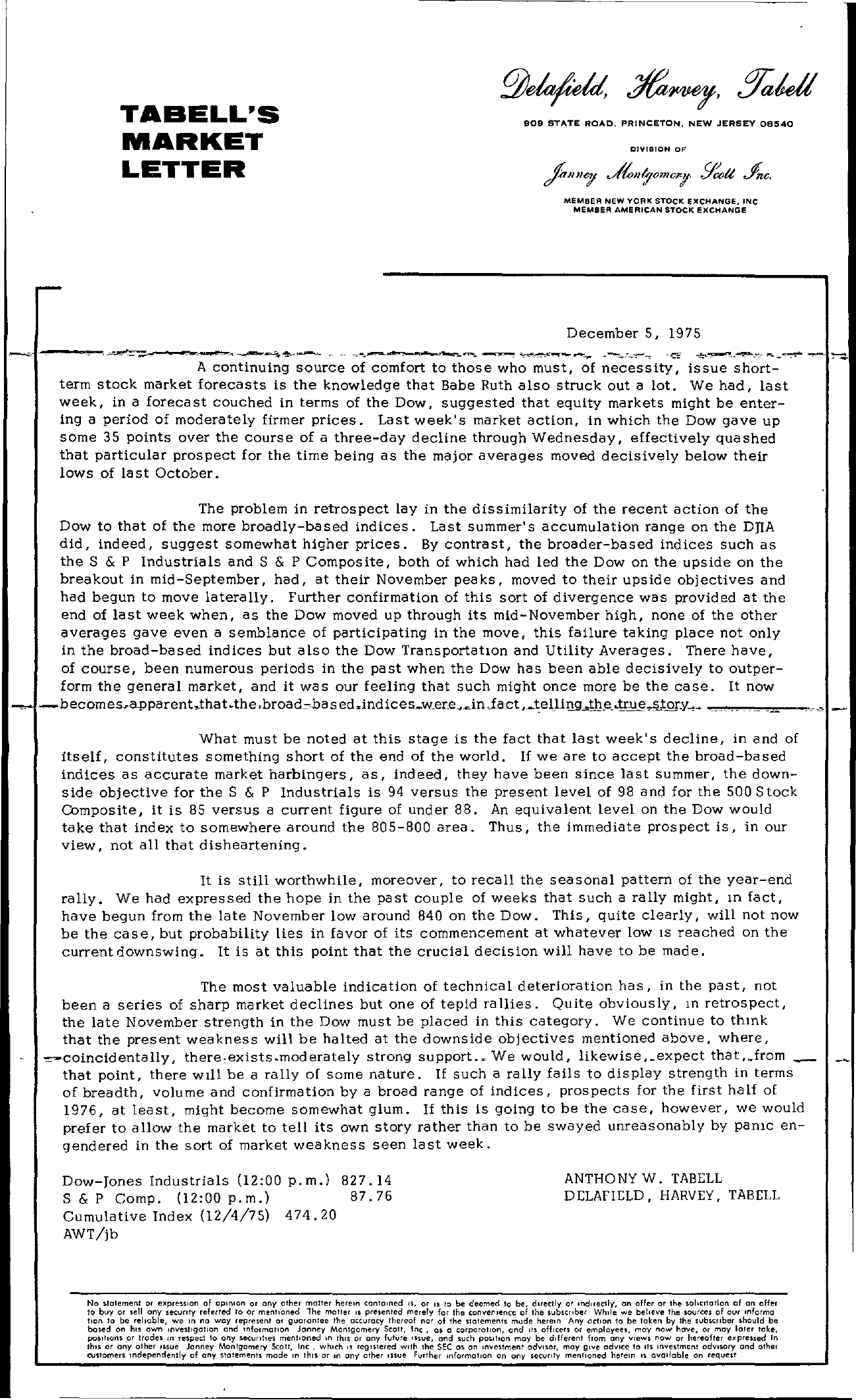 TABELL'S MARKET LETTER 909 STATE ROAD. PRINCETON, NEW JERSEY 08540 DIYISION OF MEMBER NEW VORK STOCK EXCHANGE. INC MEMBER AMERICAN STOCK EXCHANGE – December 5, 1975 –.;.- – – —— – . –'P- –4 ….,… .-..,…—–. — —'7.,..4 A continuing source of comfort to those who must, of necessity, issue short- term stock market forecasts is the knowledge that Babe Ruth also struck out a lot. We had, last week, in a forecast couched in terms of the Dow, suggested that equity markets might be enter- ing a period of moderately firmer prices. Last week's market action, in which the Dow gave up SOme 35 points over the course of a three-day decline through Wednesday, effectively quashed that particular prospect for the time being as the major averages moved decisively below their lows of last October. The problem in retrospect lay in the dissimilarity of the recent action of the Dow to that of the more broadly-ba sed indices. Last summer's accumulation range on the DnA did, indeed, suggest somewhat higher prices. By contrast, the broader-based indices such as the S & P Industrials and S & P Composite, both of which had led the Dow on the upside on the breakout in mid-September, had, at their November peaks, moved to their upside objectives and had begun to move laterally. Further confirmation of this sort of divergence was provided at the end of last week when, as the Dow moved up through its mid-November high, none of the other averages gave even a semblance of participating in the move, this failure taking place not only in the broad-based indices but also the Dow Transportation and Utility Averages. There have, of course, been numerous periods in the past when the Dow has been able decisively to outperform the general market, and it was our feeling that such might once more be the case. It now 1-.- becom es,apparentthat.the ,broad,,-ba s ed.ind iceswerein ,Jact ,telJi!!gthe.true.Jor.y, ,…,..–, What must be noted at this stage is the fact that last week's decline, in and of itself, constitutes something short of the end of the world. If we are to accept the broad-based indices as accurate market harbingers, as, indeed, they have been since last summer, the downside objective for the S & P Industrials is 94 Versus the present level of 98 and for the 500 Stock Composite, it is 85 versus a current figure of under 88. An equivalent level on the Dow would take that index to somewhere around the 805-800 area. Thus, the immediate prospect is, in our view, not all that disheartening. It is still worthwhile, moreover, to recall the seasonal pattern of the year-end rally. We had expressed the hope in the past couple of weeks that such a rally might, In fact, have begun from the late November low around 840 on the Dow. This, quite clearly, will not now be the case, but probability lies in favor of its commencement at whatever low 1S reached on the current downswing. It is at this pOint that the crucial decision will have to be made. The most valuable indication of technical deterioration has, in the past, not been a series of sharp market declines but one of tepid railies. Quite obviously, In retrospect, the late November strength in the Dow must be placed in this category. We continue to thmk that the present weakness will be halted at the downside objectives mentioned above, where, coincidentally, there-exists .mod erately strong support.. We would, likewise ,.expect that,.from that point, there w111 be a rally of some nature If such a rally fails to display strength in terms of breadth, volume and confirmation by a broad range of indices, prospects for the first half of 1976, at least, might become somewhat glum. If this is going to be the case, however, we would prefer to allow the market to tell its own story rather than to be swayed unreasonably by pamc engendered in the sort of market weakness seen last week. Dow-Jones Industrials (1200 p.m.) 827.14 S&P Compo (1200 p.m.) 87.76 Cumulative Index (12/4/75) 474.20 AWT/jb ANTHONY W. TAB ELL DELAFIELD, HARVEY, TABELL No totement or expression of opinion or any other moiler herem contained IS, or IS 10 be deemed to be, dHeclly or mdlre(1ly, on offer or the solicltotlon of on offer to buy or sell anr. security referred to or mentioned lhe molter IS presented merely for the conver'lenct of Ihe subscriber WI-nle -Ne believe Ihe sources of ovr mformo lion to be rei lob e, we In no way represenl or guaranlee the accuracy thereof nor of the statements mude herein Any o(1lon to be loken by the sub.cflber should be based on hiS own inVestigation ond mforma/lon Jonney Montgomery Seal!, Inc, as a corporation, and lis officers or employees. may now have, or moy laler take. positions or trades In respect to any secufliles mentioned In thiS or any future Issue, ol'ld such paslhan may be different from any views now or hereafter expressed 10 thu or any other ISsue Jonl'ley Montgomery Scott, Inc;, which IS registered With the SEC as on 10yestment adVisor, may give adVice to liS IOvestmeol adVISOry ol'ld other CUtomers Independently of any statements made In thiS or 10 ooy other Issue Further informatIOn 00 al'ly securlly mentioned herem IS available on request 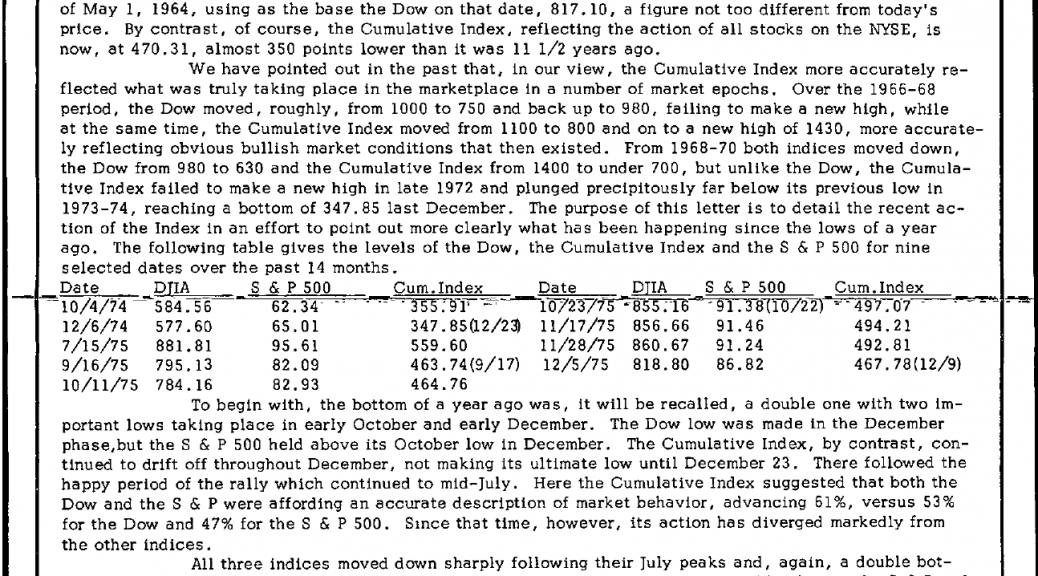 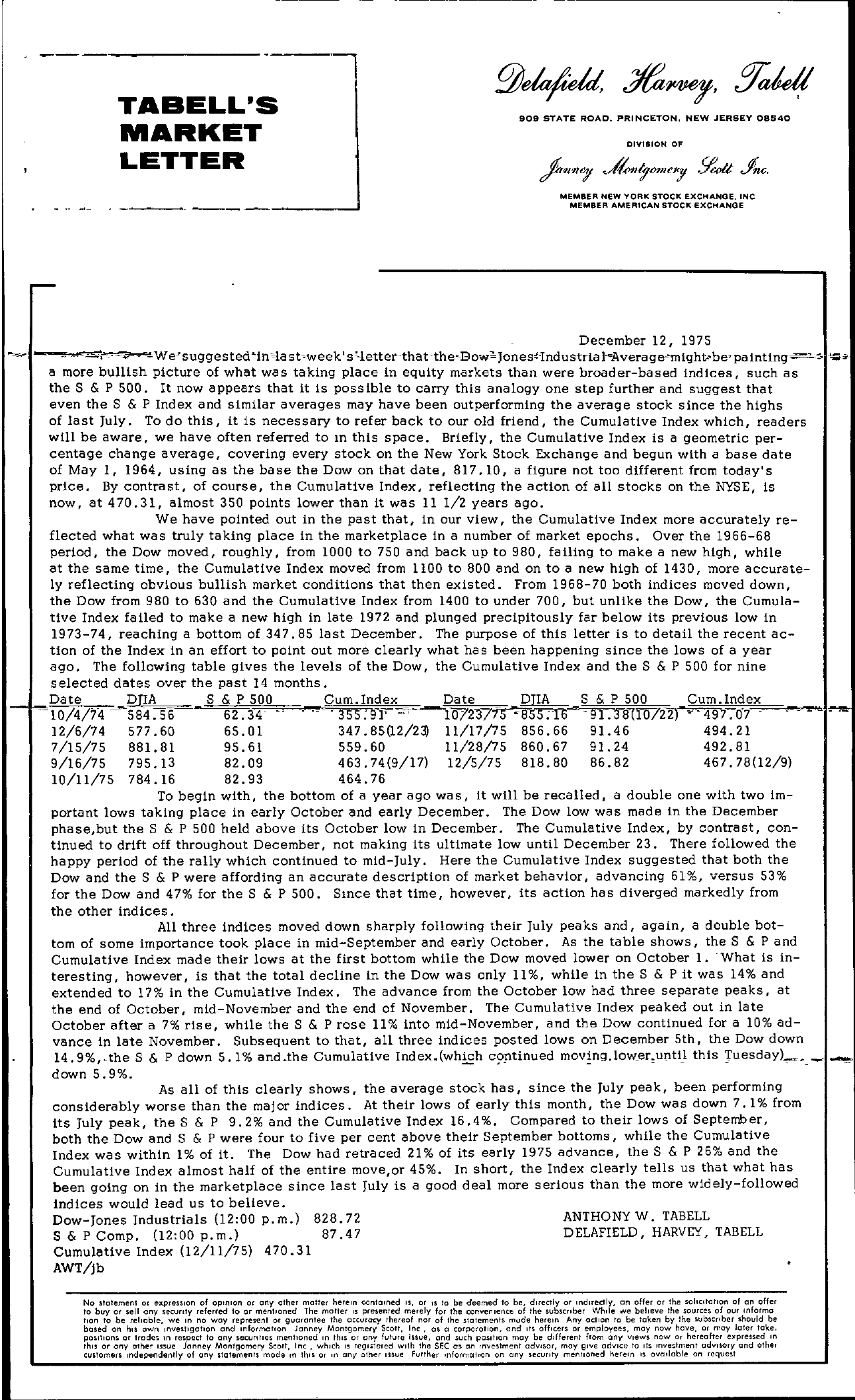 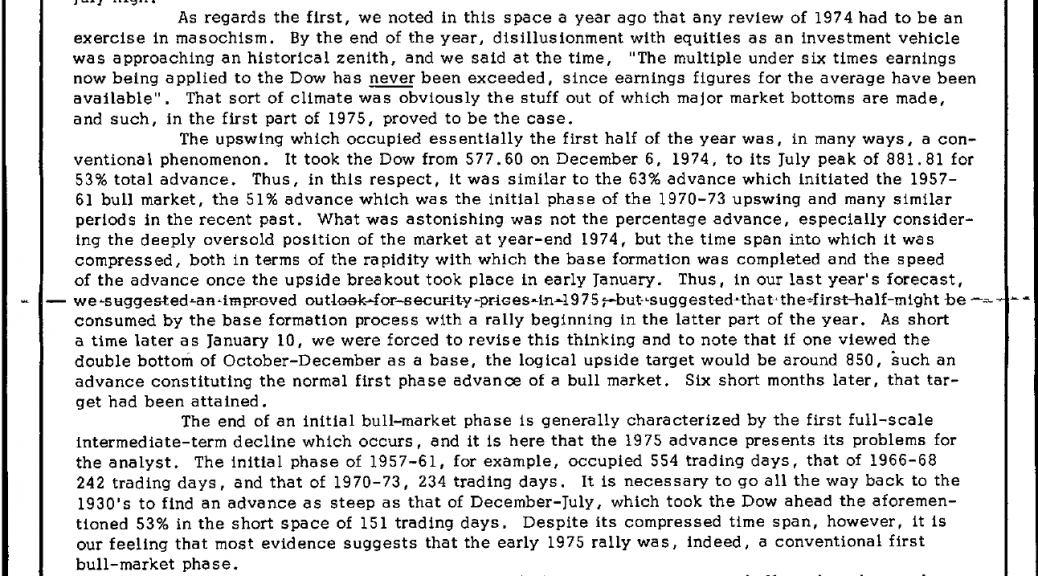 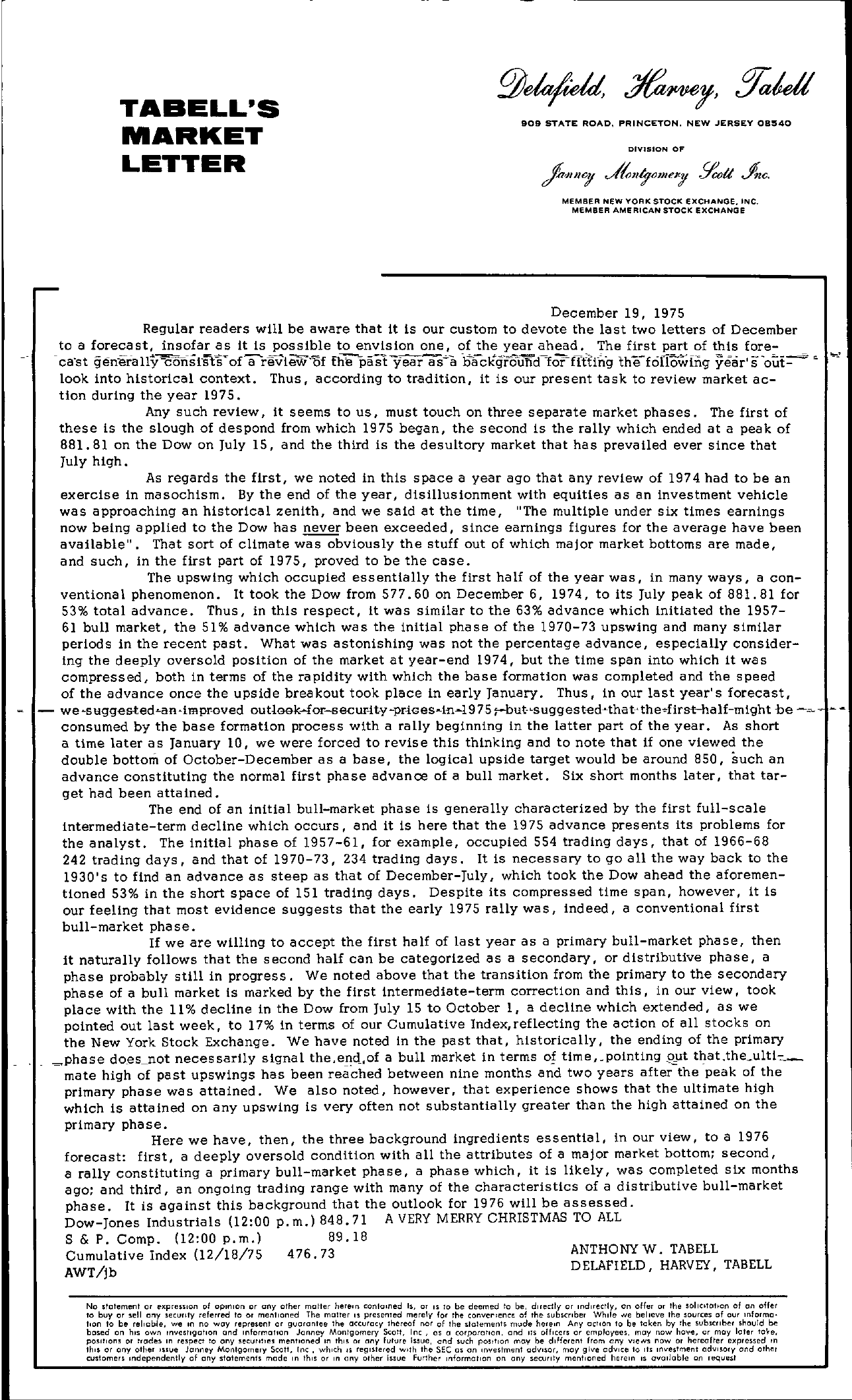 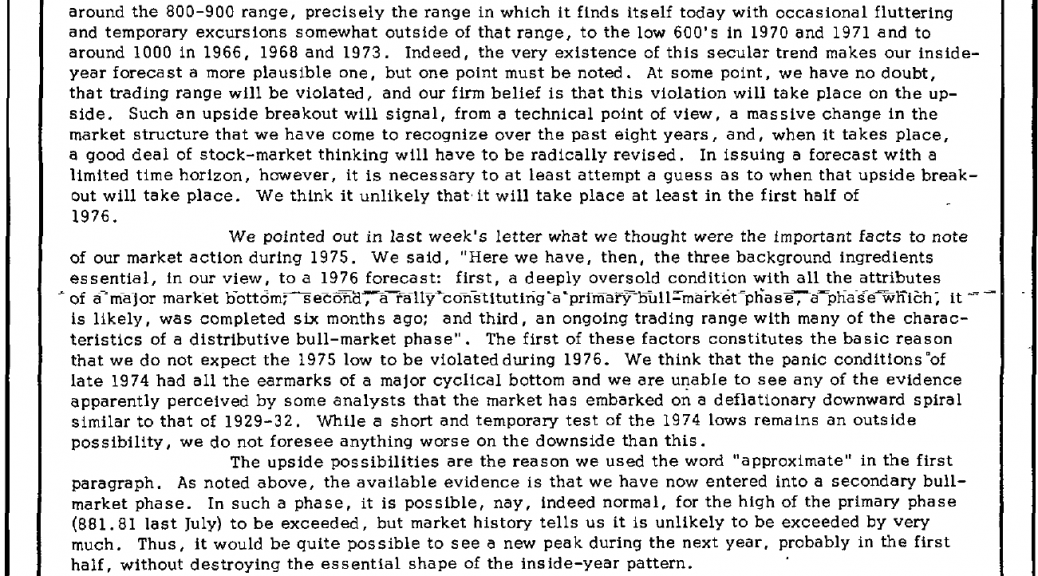 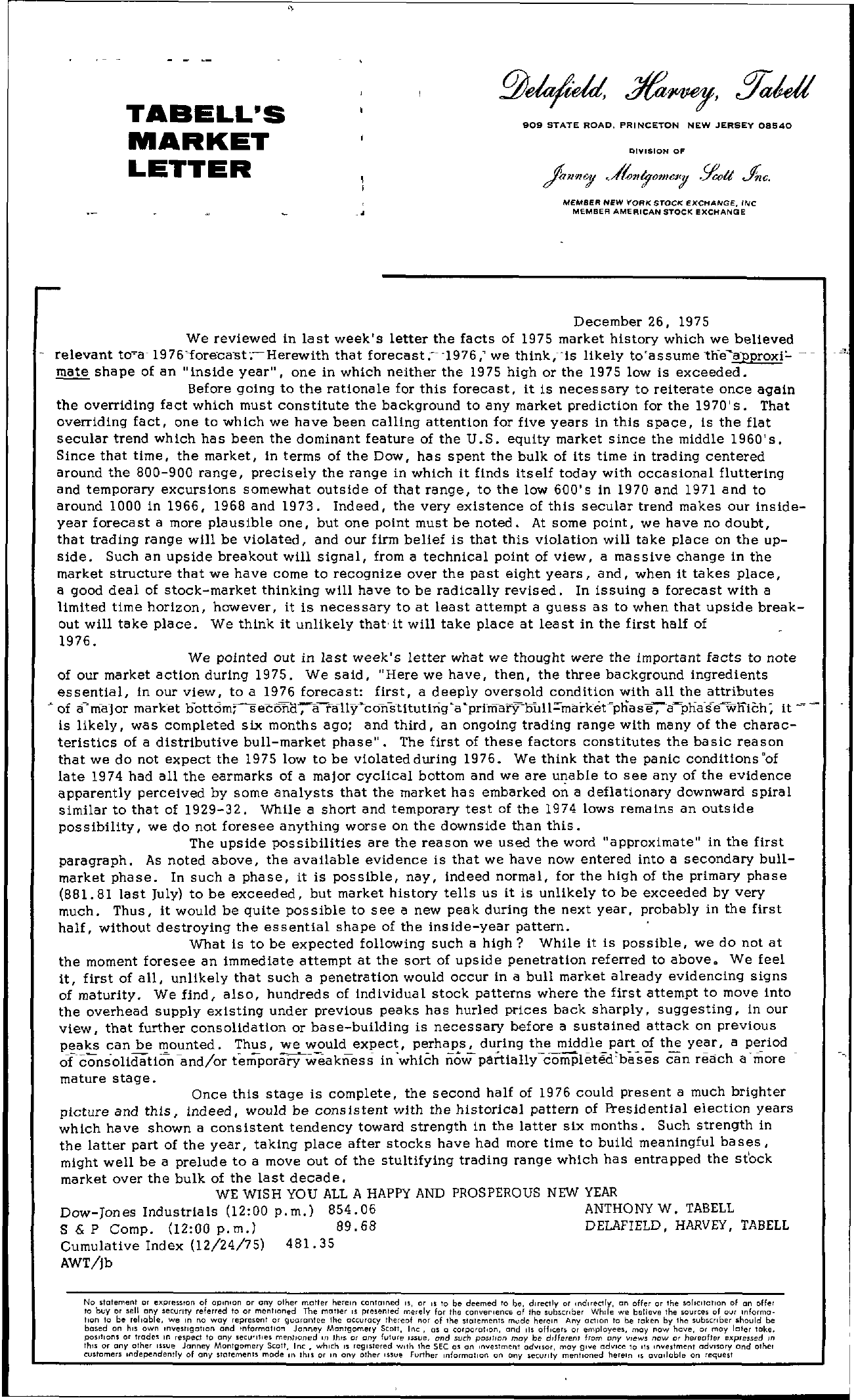