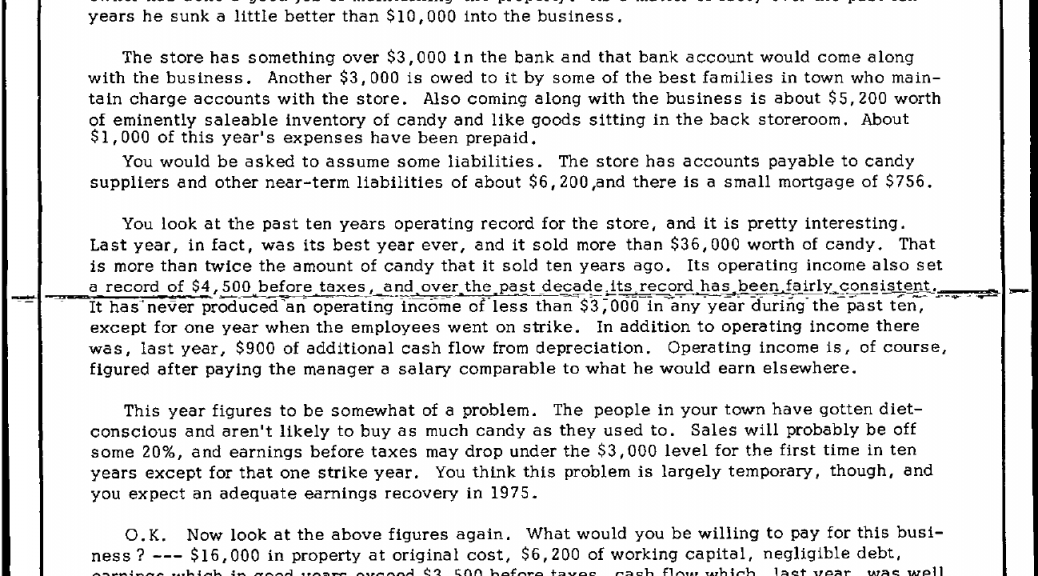 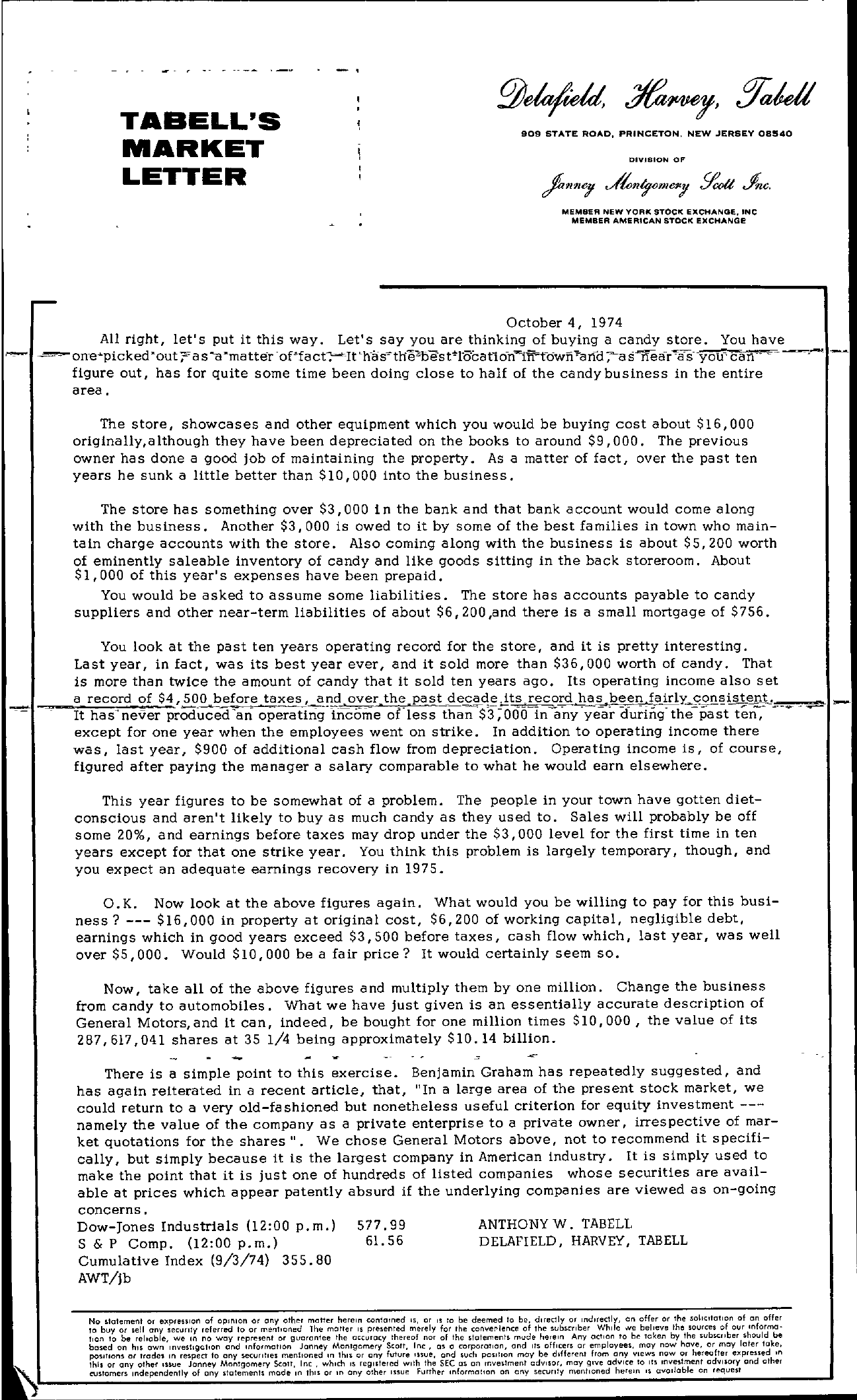 TABELL'S MARKET LETTER 909 STATE ROAD, PRINCETON. NEW JERSEY 08540 DIVISION OF MEMBER NEW YORk STOCK eXCHANGE. INC MEMBER AMERICAN STOCK EXCHANGE I – October 4, 1974 All right, let's put it this way. Let's say you are thinking of buying a candy store. You have – on-e'pickedout;'a s amatter -of'fact-It ch-asthe-'f,-gst'lo-ian6niiit-(jwfi;-ana;–a s!1eaY'''a-s- you- can– – –,-II figure out, has for quite some time been doing close to half of the candy business in the entire area. The store, showcases and other equipment which you would be buying cost about 16,000 originallY,although they have been depreciated on the books to around 9, 000. The previous owner has done a good job of maintaining the property. As a matter of fact, over the past ten years he sunk a little better than 10,000 into the business. The store has something over 3, 000 in the bank and that bank account would come along with the business. Another 3, 000 is owed to it by some of the best families in town who maintain charge accounts with the store. Also coming along with the business is about 5,200 worth of eminently saleable inventory of candy and like goods sitting in the back storeroom. About 1, 000 of this year's expenses have been prepaid. You would be asked to assume some liabilities. The store has accounts payable to candy suppliers and other near-term liabilities of about 6,200 ,and there is a small mortgage of 756. You look at the past ten years operating record for the store, and it is pretty interesting. Last year, in fact, was its best year ever, and it sold more than 36, 000 worth of candy. That is more than twice the amount of candy that it sold ten years ago. Its operating income also set a record of 4,500 before taxes, and over the past decade.its record has been fairly consistent It has never prodd an operatingTe ofless than'3;'060 in a-ny -ye-r ,furtng- th-;-past ten, except for one year when the employees went on strike. In addition to operating income there was, last year, 900 of additional cash flow from depreciation. Operating income is, of course, figured after paying the manager a salary comparable to what he would earn elsewhere. 1- This year figures to be somewhat of a problem. The people in your town have gotten dietconscious and aren't likely to buy as much candy as they used to. Sales will probably be off some 20, and earnings before taxes may drop under the 3, 000 level for the first time in ten years except for that one strike year. You think this problem is largely temporary, though, and you expect an adequate earnings recovery in 1975. O. K. Now look at the above figures again. What would you be willing to pay for this business — 16,000 in property at original cost, 6,200 of working capital, negligible debt, earnings which in good years exceed 3,500 before taxes, cash flow which, last year, was well over 5,000. Would 10,000 be a fair price It would certainly seem so. Now, take all of the above figures and multiply them by one million. Change the business from candy to automobiles. What we have just given is an essentially accurate description of General Motors,and it can, indeed, be bought for one million times 10,000, the value of its -287,617,041 shares at 351/4 being approximately 10.14 billion. There is a simple point to this exercise. Benjamin Graham has repeatedly suggested, and has again reiterated in a recent article, that, In a large area of the present stock market, we could return to a very old-fashioned but nonetheless useful criterion for equity investment –namely the value of the company as a private enterprise to a private owner, irrespective of market quotations for the shares. We chose General Motors above, not to recommend it specifi- cally, but Simply because it is the largest company in American industry. It is simply used to make the point that it is just one of hundreds of listed companies whose securities are available at prices which appear patently absurd if the underlying companies are viewed as on-going concerns. Dow-Jones Industrials (1200 p.m.) S & P Compo (1200 p. m.) 577.99 61. 56 ANTHONY W. TABELL DELAFIELD, HARVEY, TAB ELL Cumulative Index (9/3/74) 355.80 AWT/jb No totement or expression of Opinion or cny other matter herein contomed IS, or IS to be deemed to be, directly or indirectly, on offer or the SOIICI'otlon of on offer 10 buy or sell any security referred to or menTIoned The motter IS presented merely for the converlence of the subSCriber Whde He believe the sources of our informa- tion to be reliable, we In no way represent or guarantee the accuracy thereof nor of the statemena mude herein Any action to be taken by the subSCriber should be based on hiS own investigation and information Janney Montgomery Scott, Inc, as a corporation, and lIs officers or employees, may now hove, or moy later take, 1Il.'- 1IIl'L- poSitions or tradc, In respect to any securities mentIOned In thiS or any future ISsue, and such position may be different from any views now or hereafter expressed In this or any other Issue Janney Montgomery call, Inc, which IS registered With the SEC as on IOvestment adVisor, may give adVice to Its Investment adVISOry and ather ruom''d'P'd','YOfOY''om','mod','h,,o,,oyo'h''''Fh'',fo'mooOOy,,ru..,ym,,,o'dh''''ovo'ob',o''q'-J 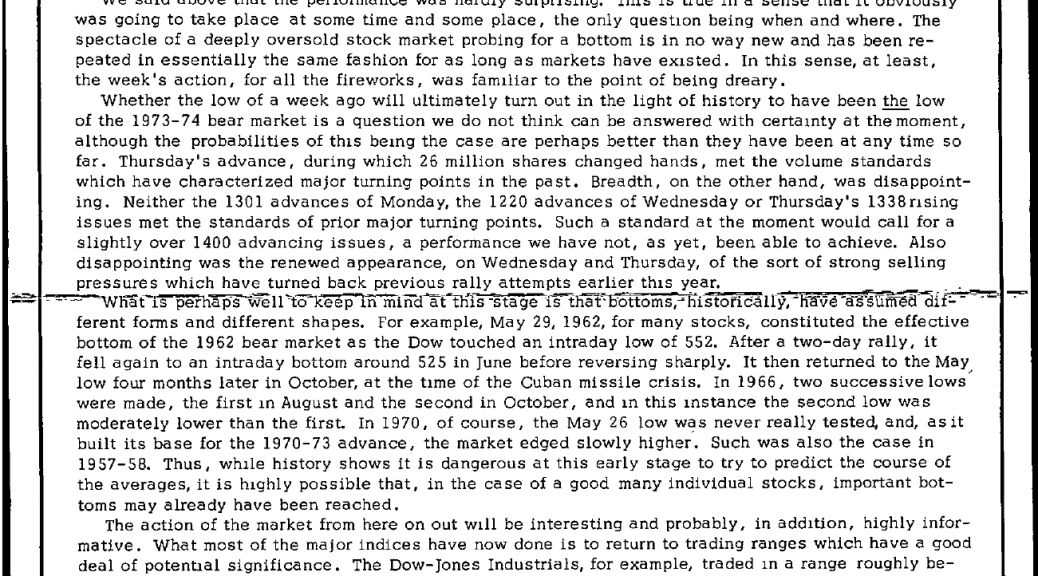 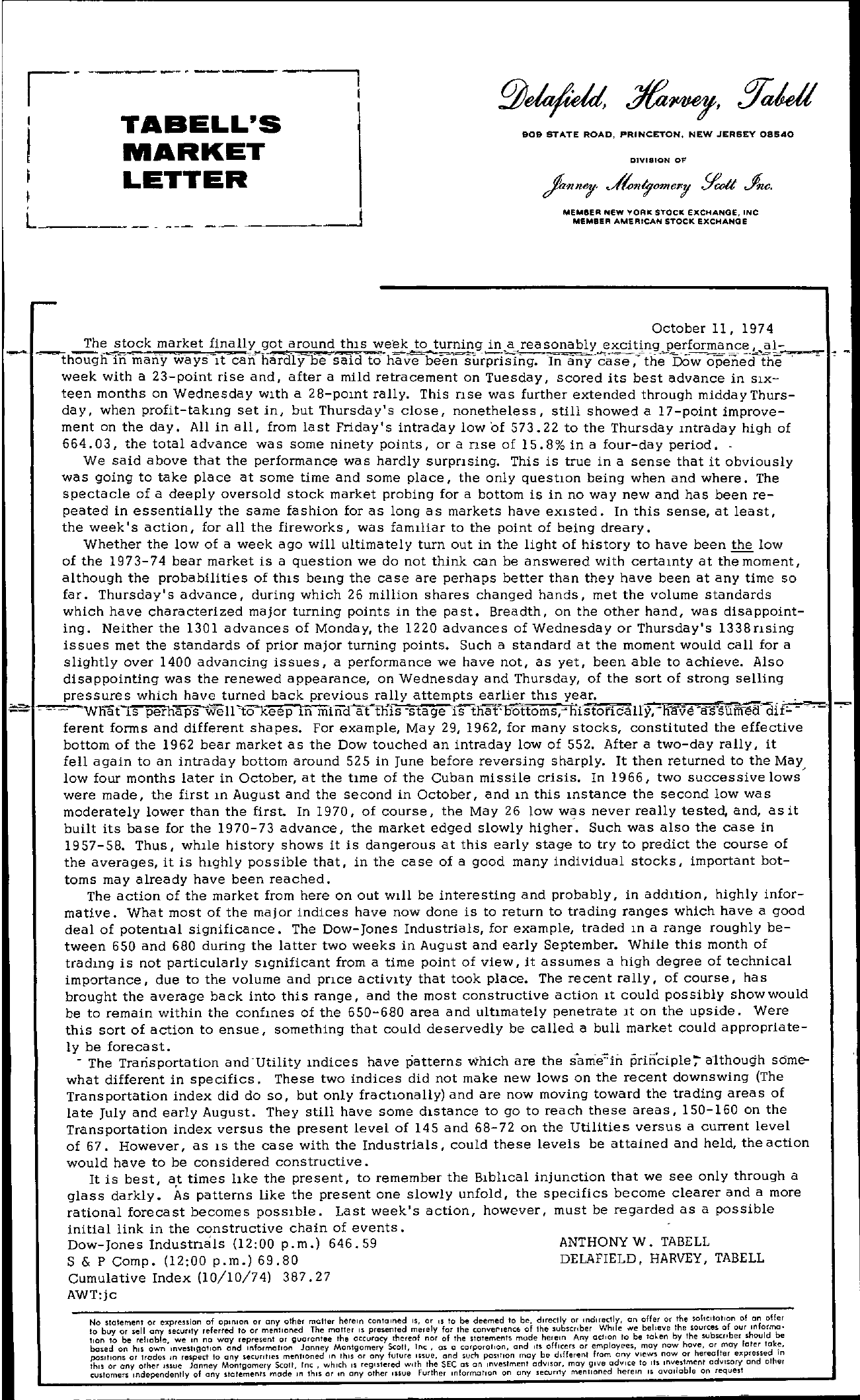 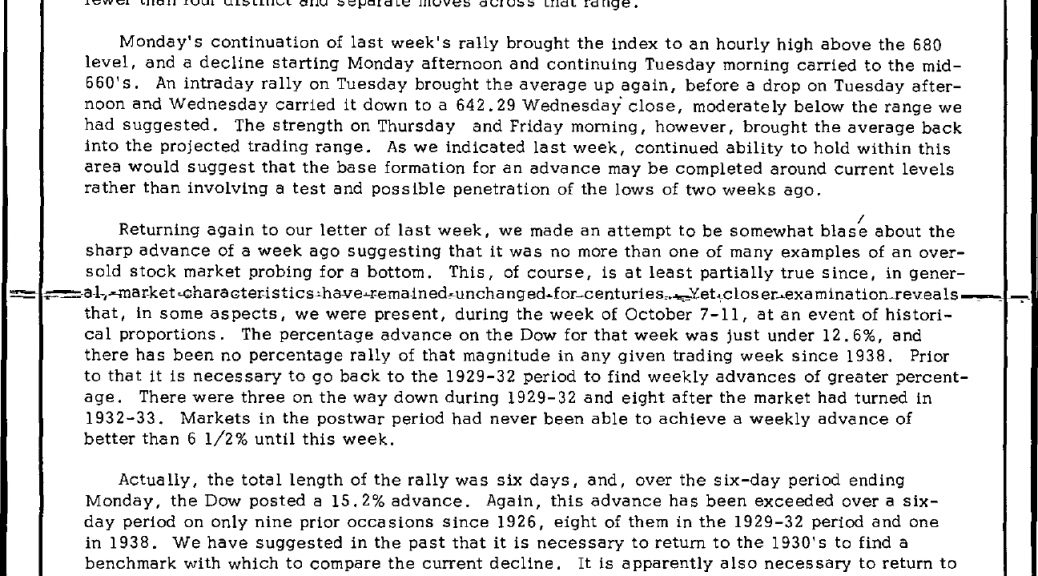 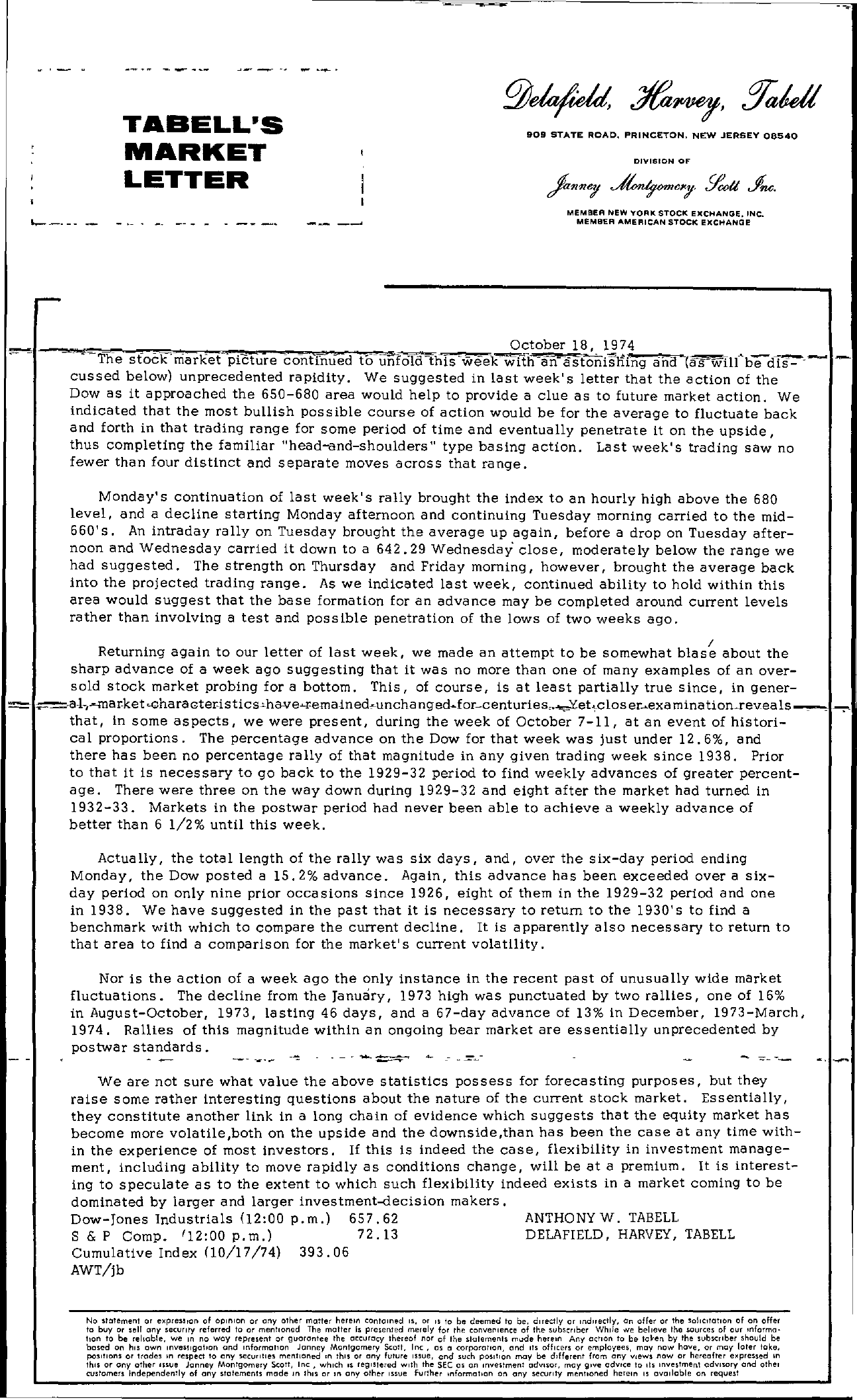 r..— — —–'- – -…….. TABELL'S MARKET LETTER – 909 STATE ROAD, PRINCETON. NEW JERSEY 08540 DIVISION OF MEMBER NEW YORK STOCK EXCHANGE. INC. MEMBER AMERICAN STOCK EXCHANGE -1-…..'…-.-T-n-e,-s.to-c-k''7m'a-,rk.e.t,.',p,i,c.t.u..re.conti,n,u..e.d..,t-o,–u..m..c.i,l.a-th i s -w eek .wS2ffchto-abne-ra1st8o,n 197,;.4,,,isfiing aild ( as-w il l be dl S – ' – cussed below) unprecedented rapidity. We suggested in last week's letter that the action of the Dow as it approached the 650-680 area would help to provide a clue as to future market action. We indicated that the most bullish possible course of action would be for the average to fluctuate back and forth in that trading range for some period of time and eventually penetrate it on the upside, thus completing the familiar head-and-shoulders type basing action. Last week's trading saw no fewer than four distinct and separate moves across that range. Monday's continuation of last week's rally brought the index to an hourly high above the 680 level, and a decline starting Monday afternoon and continuing Tuesday morning carried to the mid660' s. An intraday rally on Tuesday brought the average up again, before a drop on Tuesday afternoon and Wednesday carried it down to a 642.29 Wednesday close, moderately below the range we had suggested. The strength on Thursday and Friday morning, however, brought the average back into the projected trading range. As we indicated last week, continued ability to hold within this area would suggest that the base formation for an advance may be completed around current levels rather than involving a test and possible penetration of the lows of two weeks ago. / Returning again to our letter of last week, we made an attempt to be somewhat blase about the sharp advance of a week ago suggesting that it was no more than one of many examples of an over- sold stock market probing for a bottom. This, of course, is at least partially true Since, in genera-lTma eket -Gha ra Gter-i s tic sha-verema,in edu ncha ng ed.for.centurie s….,.xet,c los erexa mina tionrev-ea Is that, in some aspects, we were present, during the week of October 7-11, at an event of historical proportions. The percentage advance on the Dow for that week was just under 12.6, and there has been no percentage rally of that magnitude in any given trading week since 1938. Prior to that it is necessary to go back to the 1929-32 period to find weekly advances of greater percentage. There were three on the way down during 1929-32 and eight after the market had turned in 1932-33. Markets in the postwar period had never been able to achieve a weekly advance of better than 6 1/2 until this week. Actually, the total length of the rally was six days, and, over the six-day period ending Monday, the Dow posted a 15.2 advance. Again, this advance has been exceeded over a sixday period on only nine prior occasions Since 1926, eight of them in the 1929-32 period and one in 1938. We have suggested in the past that it is necessary to return to the 1930's to find a benchmark with which to compare the current decline. It is apparently also necessary to return to that area to find a comparison for the market's current volatility. Nor is the action of a week ago the only instance in the recent past of unusually wide market fluctuations. The decline from the January, 1973 high was punctuated by two rallies, one of 16 in August-October, 1973, lasting 46 days, and a 67-day advance of 13 in December, 1973-March, 1974. Rallies of this magnitude within an ongoing bear market are essentially unprecedented by postwar standards. We are not sure what value the above statistics possess for forecasting purposes, but they – raise some rather interesting questions about the nature of the current stock market. Essentially, they constitute another link in a long chain of evidence which suggests that the equity market has become more volatile,both on the upside and the downside,than has been the case at any time with- in the experience of most investors. If this is indeed the case, flexibility in investment manage- ment, including ability to move rapidly as conditions change, will be at a premium. It is interest- ing to speculate as to the extent to which such flexibility indeed exists in a market coming to be dominated by larger and larger investment-decision makers. Dow-Jones Industrials (1200 p.m.) 657.62 ANTHONY W. TABELL S & P Compo 11200 p.m.) 72.13 DELAFIELD, HARVEY, TABELL Cumulative Index (10/17/74) 393.06 AWT/jb No stctemenl or expreSSion of opinion or any other maIler herein Contolned IS, or IS to be deemed to be. directly or Indirectly, On offer or the SOI'Cllotlon of on offer to buy or sell ony security referred 10 or mentioned The mottC!f Is presented merely for the corwerlence of the subscriber While Ne believe the sources of our 1Oforma han to be reliable, we 10 no way represent or guarantee the accuracy thereof nor of the statements mude herem Any (lctlon to be taen by Ihe subSCriber should be based on hiS own 1Ovestlgohon and InformallOn Janney Montgomery Stott, Inc, as a corporation, and lIs officers or employees, may now have, or moy later toke, poSitions or trades In respect to any securlhe mentioned In th' or any future Issue, and such pOSition may be different from ony views now or hereofter expressed In thiS Of any other Issue Jonney Montgomery Scott, Inc, which IS regiStered With the SEC as on Investment odvlsor, may give adVice to Its Investment adVisory and other rus/omers Independently of any stotements mode In Ih,s or In ony other Issue further 1Oformol!on on any security mentioned herein IS ovodoble on request 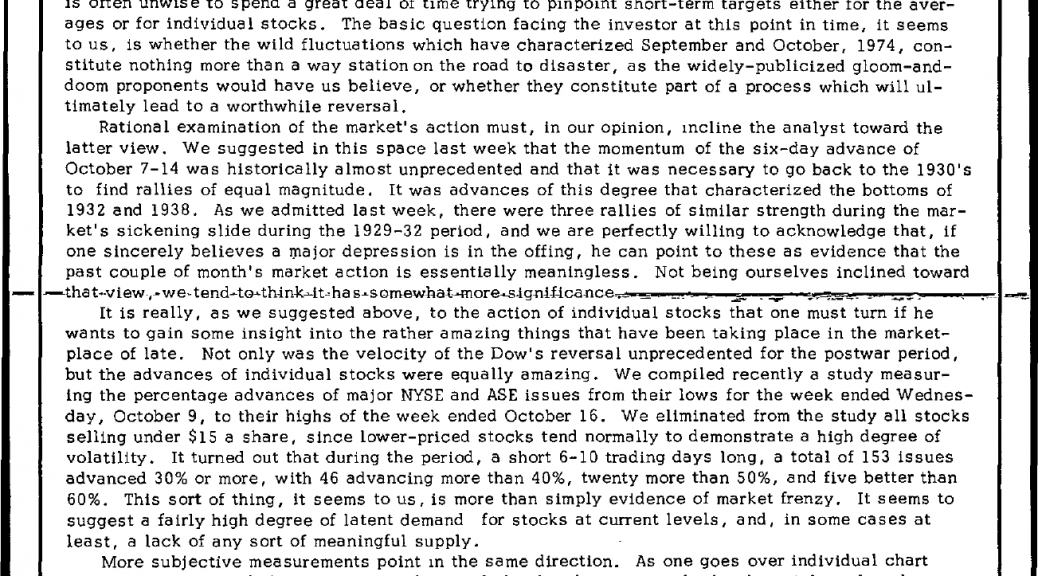 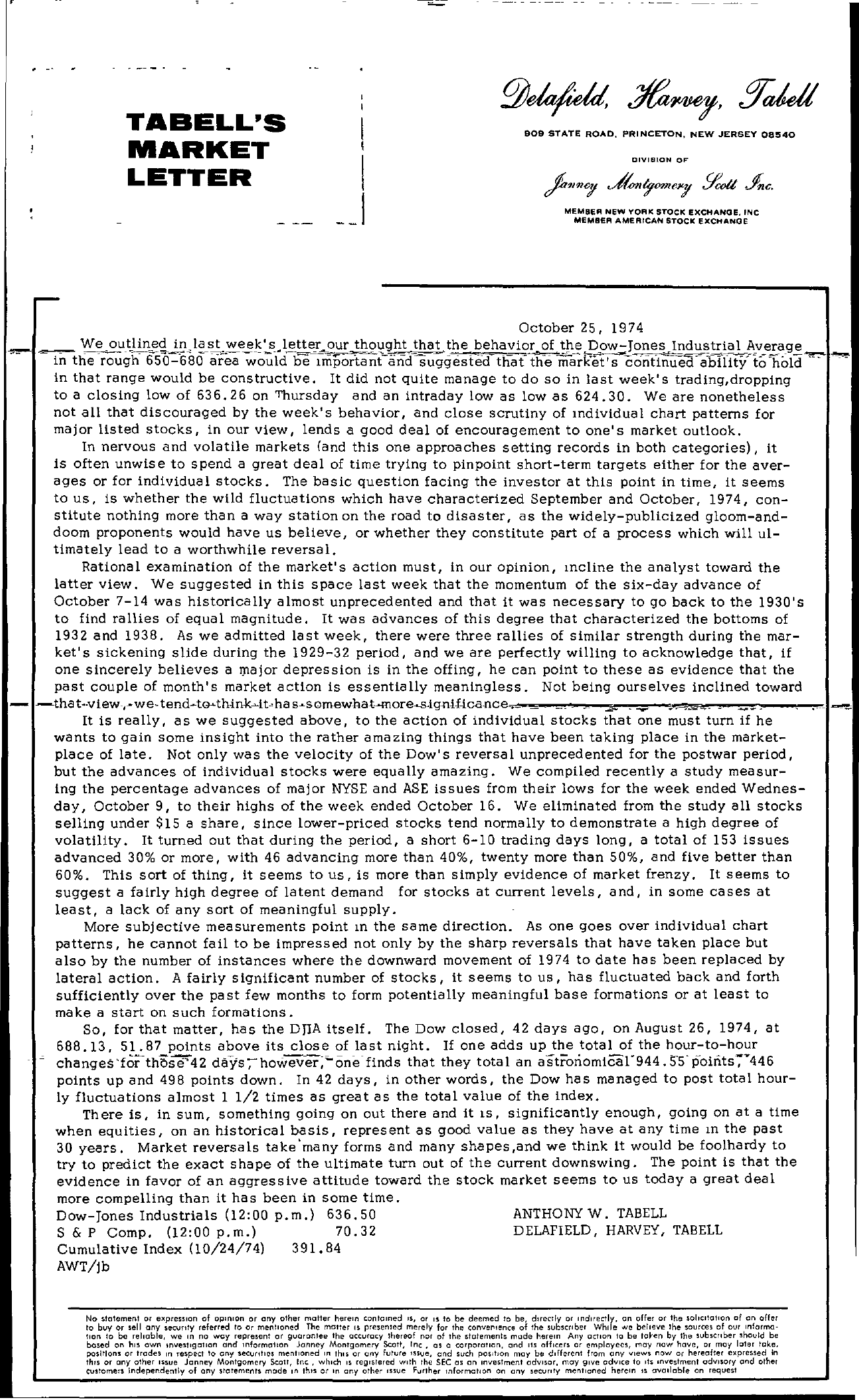