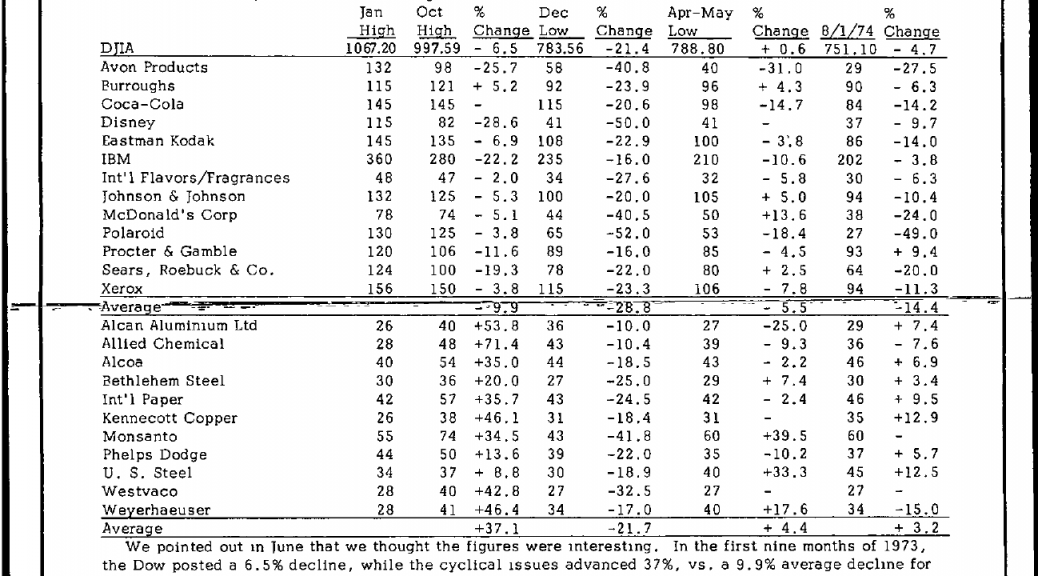 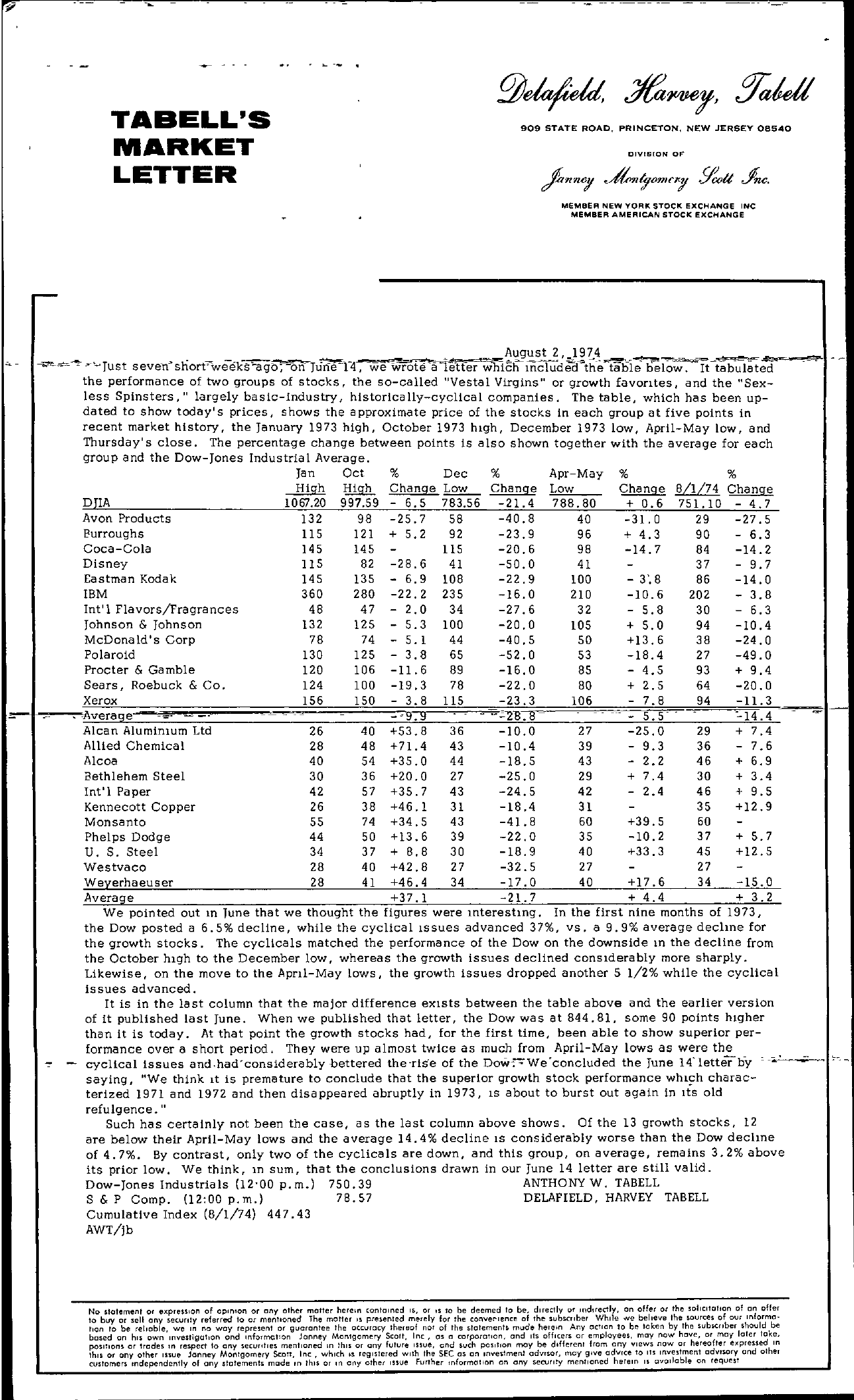 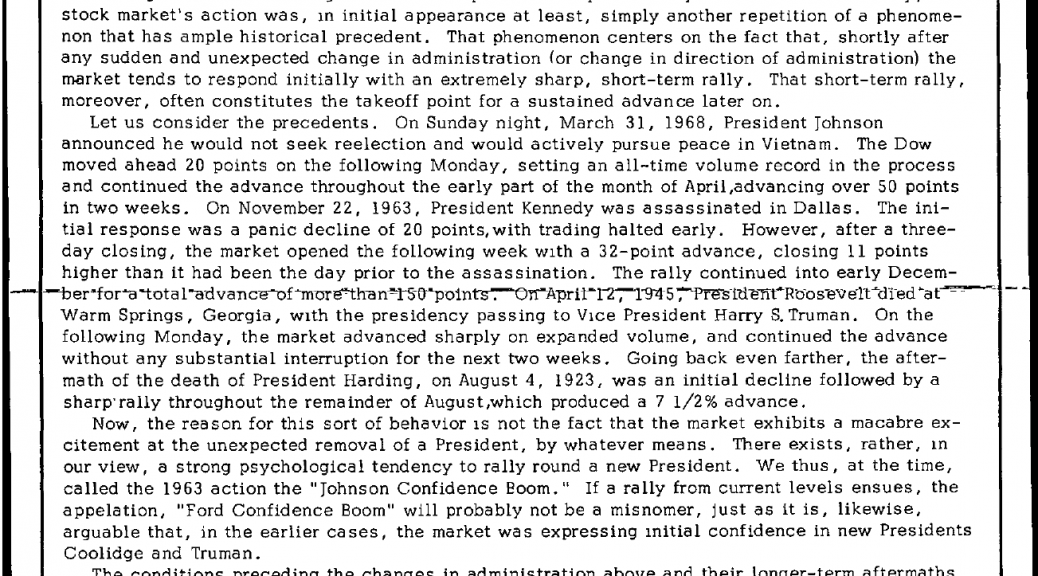 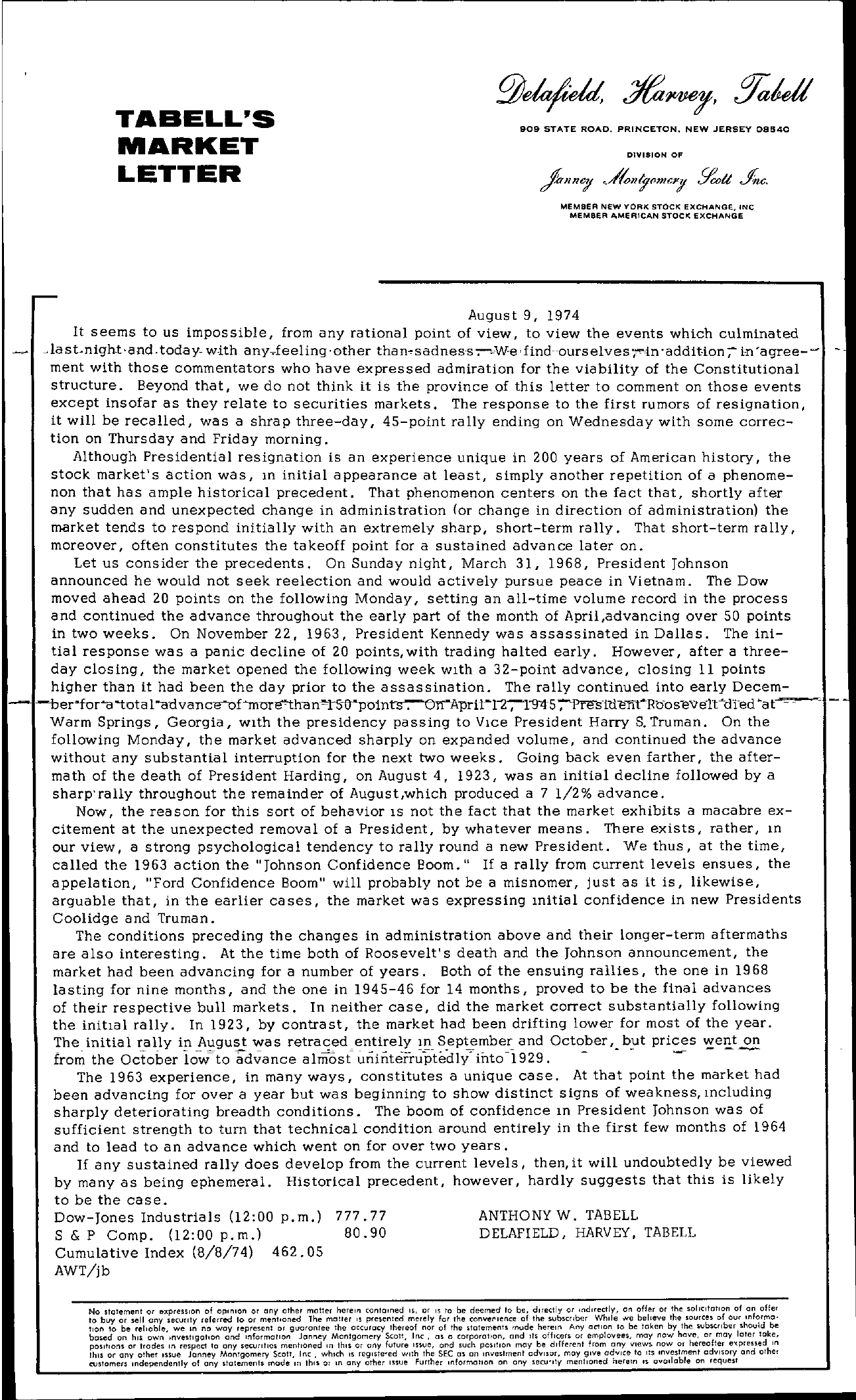 TABELL'S MARKET LETTER 909 STATE ROAD, PRINCETON. NEW JERSEY 08540 DIVISION OF MEMBER NEW VORK STOCK EXCHANGE, INC MEMBER AMERICAN STOCK EXCHANGE August 9, 1974 It seems to us impOSSible, from any rational pOint of view, to view the events which culminated la st.nightand. today. with anyfeeling other tha n-sadnesS We' find-ourselves Tn addition -;- in 'agree– ment with those commentators who have expressed admiration for the viability of the Constitutional structure. Beyond that, we do not think it is the province of this letter to comment on those events except insofar as they relate to securities markets. The response to the first rumors of resignation, it will be recalled, was a shrap three-day, 45-point rally ending on Wednesday with some correc- tion on Thursday and Friday morning. Although PreSidential resignation is an experience unique in 200 years of American history, the stock market's action was, m initial appearance at least, simply another repetition of a phenome- non that has ample historical precedent. That phenomenon centers on the fact that, shortly after any sudden and unexpected change in administration (or change in direction of administration) the rrKlrket tends to respond initially with an extremely sharp, short-term rally. That short-term rally, moreover, often constitutes the takeoff point for a sustained advance later on. Let us consider the precedents. On Sunday night, March 31, 1968, President Johnson announced he would not seek reelection and would actively pursue peace in Vietnam. The Dow moved ahead 20 points on the following Monday, setting an all-time volume record in the process and continued the advance throughout the early part of the month of April ,advancing over 50 points in two weeks. On November 22, 1963, President Kennedy was assassinated in Dallas. The ini- tial response was a panic decline of 20 points, with trading halted early. However, after a three- day closing, the market opened the following week wIth a 32-point advance, closing 11 pOints higher than it had been the day prior to the assassination. The rally continued into early Decem- – -ber-for-a-tota 1-auvanCErofmore'thln''l'SOpo1nts. On Aprirr2-,-19457'Prn-siuent-Rb'oS'even-dfed at—'- Warm Springs, Georgia, wIth the presidency passing to V,ce President Harry S. Truman. On the following Monday, the market advanced sharply on expanded volume, and continued the advance without any substantial interruption for the next two weeks. Going back even farther, the after- math of the death of President Harding, on August 4. 1923, was an initial decline followed by a sharp' rally throughout the remainder of August,which produced a 7 1/2 advance. Now, the rea son for this sort of behavior IS not the fact that the market exhibits a macabre ex- citement at the unexpected removal of a President, by whatever means. There exists, rather, m our view. a strong psychological tendency to rally round a new President. We thus, at the time, called the 1963 action the Johnson Confidence Eoom. If a rally from current levels ensues, the appelation, Ford Confidence Boom will probably not be a misnomer, just as it is, likewise, arguable that, in the earlier ca ses, the market wa s expressing mitial confidence in new Presidents Coolidge and Truman. The conditions preceding the changes in administration above and their longer-term aftermaths are also interesting. At the time both of Roosevelt's death and the Johnson announcement, the market had been advancing for a number of years. Both of the ensuing rallies, the one in 1968 lasting for nine months, and the one in 1945-46 for 14 months, proved to be the final advances of their respective bull markets. In neither case, did the market correct substantially following the initIal rally. In 1923, by contrast, the market had been drifting lower for most of the year. The initial rally in August was retraced entirely m September and October, but prices went on . . – – – –… – – – – – -.– – – –;;-. — – . — – —- from the October low to advance almost uninterruptedly into 1929. The 1963 experience, in many ways, constitutes a unique case. At that point the market had been advancing for over a year but was beginning to show distinct signs of weakness, mcluding sharply deteriorating breadth conditions. The boom of confidence m President Johnson was of sufficient strength to turn that technical condition around entirely in the first few months of 1964 and to lead to an advance which went on for over two years. If any sustained rally does develop from the current levels. then, it will undoubtedly be viewed by many as being ephemeral. Historical precedent, however, hardly suggests that this is likely to be the case. Dow-Jones Industrials (1200 p.m.) 777.77 S & P Compo (1200 p.m.) 80.90 ANTHONY W. TABELL DELAFIELD, HARVEY, TAB ELL Cumulative Index (8/8/74) 462.05 AWT/jb No stalemenl or expression of opinion or any other moIler herem contolned IS, or IS to be deemed to be, directly or mdlrectly, on offer or Ihe sollcltotlon of on offer to buy or sell any securrty referred 10 or menlloned The molter IS presented merely for Ihe conVCl'lenCE of the subscriber While -HC believe the sources of our information to be reliable, we In no way represent or guarantee the accuracy thereof nor of the statements mude herein Any cc1lon to be token by the subscriber should be bosed on hiS own InvestlgohOn ond Information Janney Montgomery Scot Inc, os 0 corporation, ond Its officers or employees, may now have, or may Icter toke, positions or trades In respect 10 any seculltlcs mentioned In thiS or ony future Issue, and such position may be different from any views now or hercofter expressed In thiS or any other Issue Janney Montgomery Scott, Inc, which IS reglslc-cd With the SEC as on Investment adVisor, may give adVice to liS investment adVISOry and other customers Independently of any statements mode In thiS Of In any other Issue Further information on any secu-Ily mentIOned herein IS ovolloble on request 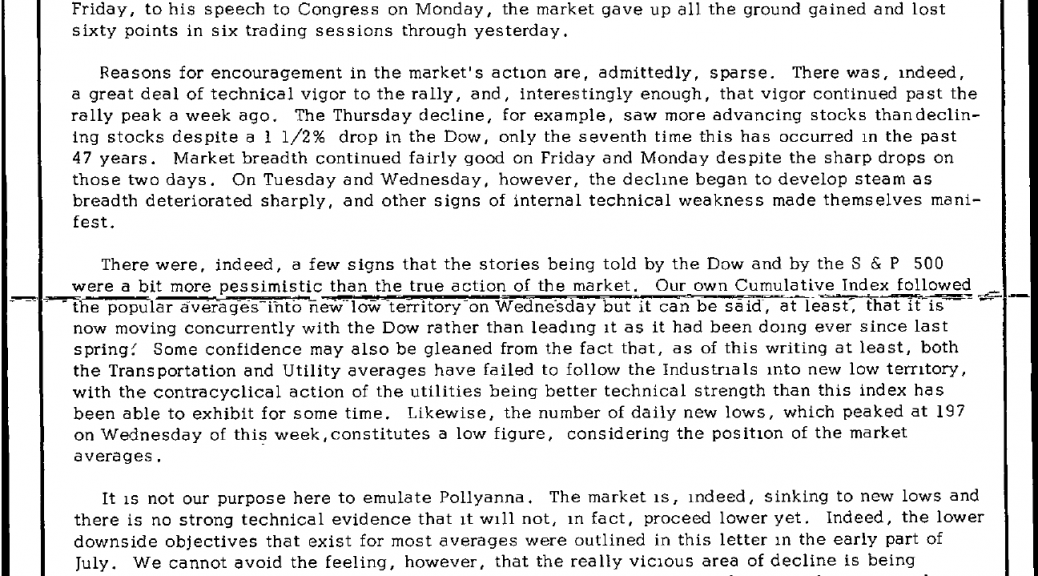 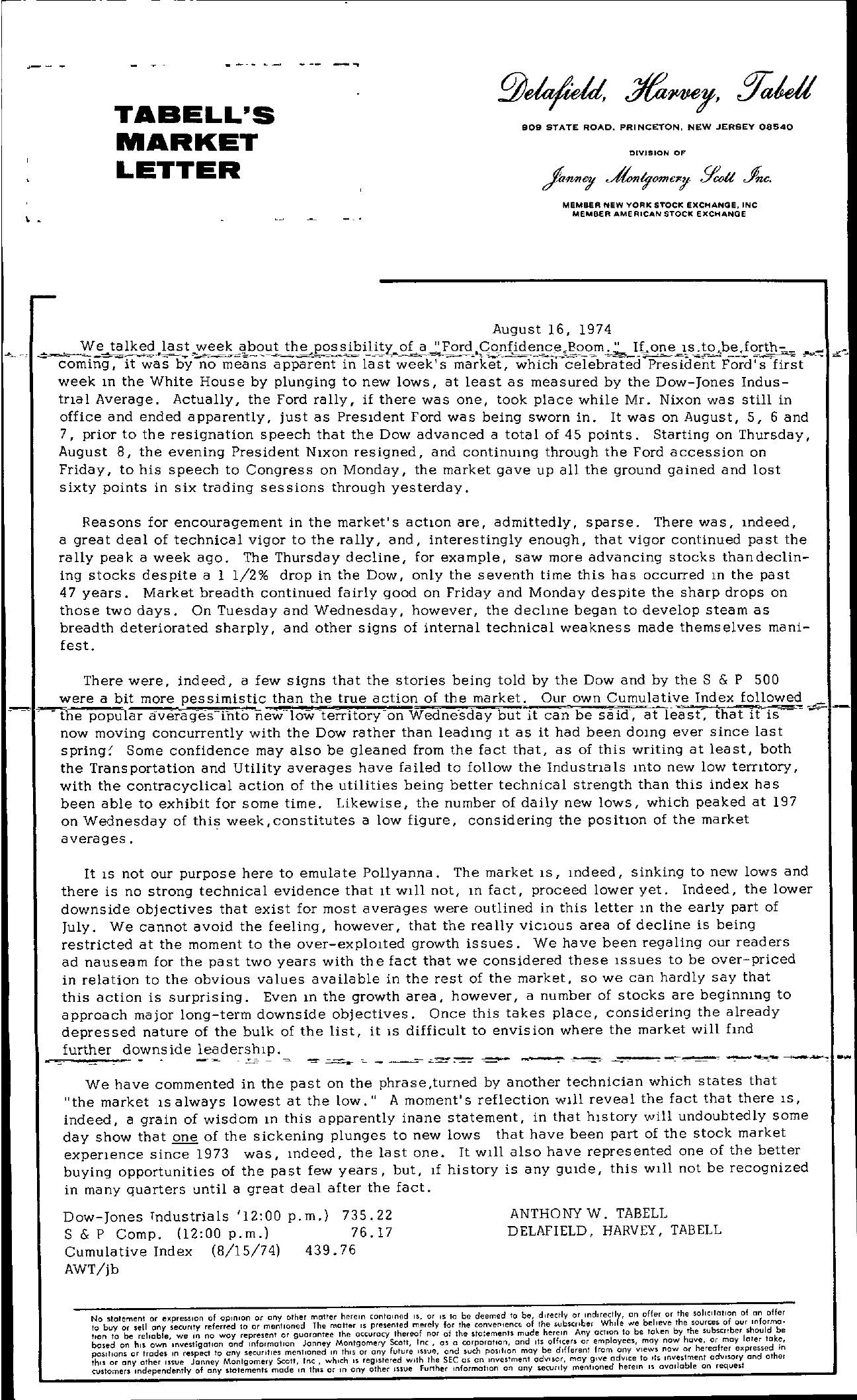 TABELL'S MARKET LETTER ,. 909 STATE ROAD. PRINCETON, NEW JERSEY 08540 DIVISION OF MEMBER NEW VORK STOCK eXCHANGE, INC MEMBER AMERICAN STOCK eXCHANGE August 16, 1974 Welk-ed)st.. e-.'-..k.,.i-b-ou-!-th-e-possibi-li-ty'o,L8aFor-d'.'C–;Q- n–i-de.n.,c..E…'l.,.-B.o-o m-. ILoneIs.t-..o…- be,forth – … commg, it was by no means apparent in last week's market, which celebrated President Ford's first week m the White House by plunging to new lows, at least as measured by the Dow-Jones Industnal Average. Actually, the Ford rally, if there was one, took place while Mr. Nixon was still in office and ended apparently, just as PreSIdent Ford was being sworn in. It was on August,S, 6 and 7, prior to the reSignation speech that the Dow advanced a total of 45 points. Starting on Thursday, August 8, the evening President NIxon resigned, and continumg through the Ford accession on Friday, to his speech to Congress on Monday, the market gave up all the ground gained and lost sixty points in six trading sessions through yesterday. Reasons for encouragement in the market's achon are, admittedly, sparse. There was, mdeed, a great deal of technical vigor to the rally, and, interestingly enough, that vigor continued past the rally pea k a week ago. The Thursday decline, for example, saw more advancing stocks than declining stocks despite a 1 1/2 drop in the Dow, only the seventh time this has occurred In the past 47 years. Market breadth continued fairly good on Friday and Monday despite the sharp drops on those two days. On Tuesday and Wednesday, however, the dechne began to develop steam as breadth deteriorated sharply, and other signs of internal technical weakness made themselves manifest. There were, indeed, a few signs that the stories being told by the Dow and by the S & P 500 –were a bit more pessimistic than the true action of the market. Our own Cumulative Index….f.-ool.l.-o-w–e-d .. – the popular aver'ages into newlow -territory'on Wedne'sday but it can be said', at least that ICis– now moving concurrently with the Dow rather than leadmg It as it had been dOIng ever since last spring; Some confidence may also be gleaned from the fact that, as of this writing at least, both the Trans portation and Utility averages have failed to follow the Industna Is mto new low terrItory, with the contracyclical action of the utilities being better technical strength than this index has been able to exhibit for some time. Likewise, the number of daily new lows, which peaked at 197 on Wednesday of this week ,constitutes a low figure, considering the posihon of the market averages. It IS not our purpose here to emulate Pollyanna. The market IS, mdeed, sinking to new lows and there is no strong technical evidence that It w!ll not, m fact, proceed lower yet. Indeed, the lower downside objectives that exist for most averages were outlined in this letter m the early part of July. We cannot avoid the feeling, however, that the really vicIOUS area of decline is being restricted at the moment to the over-exploIted growth issues. We have been regaling our readers ad nauseam for the past two years with the fact that we considered these Issues to be over-priced in relation to the obvious values available in the rest of the market, so we can hardly say that this action is surprising. Even m the growth area, however, a number of stocks are beginmng to approach major long-term downside objectives. Once this takes place, considering the already depressed nature of the bulk of the list, it IS difficult to envision where the market will find further downSide leadershIp. – – – – – – — We have commented in the past on the phrase,turned by another technician which states that the market IS always lowest at the low. A moment's reflection WIll reveal the fact that there IS, indeed, a grain of wisdom m this apparently inane statement, in that hIstory will undoubtedly some day show that one of the Sickening plunges to new lows that have been part of the stock market expenence since 1973 was, mdeed, the last one. It WIll also have represented one of the better buying opportunities of the pa st few years, but, If history is any gUIde, this w!ll not be recognized in many quarters until a great deal after the fact. Dow-Jones Tndustrials '1200 p.m.) 735.22 S & P Compo (1200 p.m.) 76.17 Cumulative Index (8/15/74) 439.76 AWT/jb ANTHONY W. TABELL DELAFIELD, HARVEY, TABELL No statement or expression of opInion or Clny other motter herein contained IS, or IS to be deemed to be, directly or mdlrectly, on offer or the soliCitation of on offer 10 buy or sell ony seCIJrlty hon to be reliable, we In referred no way to or mentioned The matter 1 presented merely represent or guarantee the accuracy thereof nor for of the the sclao!nevmelelnentsCfmuodf ethheerseuinbSCArinbyer acWtIOhnileto ebebtealieevne the sources of our Informaby the subSCriber should be based on hiS own Investigation and informatIOn Janney Montgomery Scott, Inc, as a corporation, and Its officers or employees, may now have, or may later take, pasltlons or trade, In respect to any SeCUrltles mentioned In thiS or any future Issue, and such pOSition may be different from any views now or hereafter expressed In thiS or any ather Issue Janney Montgomery Scoll, Inc, whICh IS registered With the SEC as on Investment adVisor, moy gIVe adVICe to Its Investment adVisory and othel customers Independently of any statements made In thiS or In any other lS5ue fUMher Informollon on any security menhoned herein IS available on request 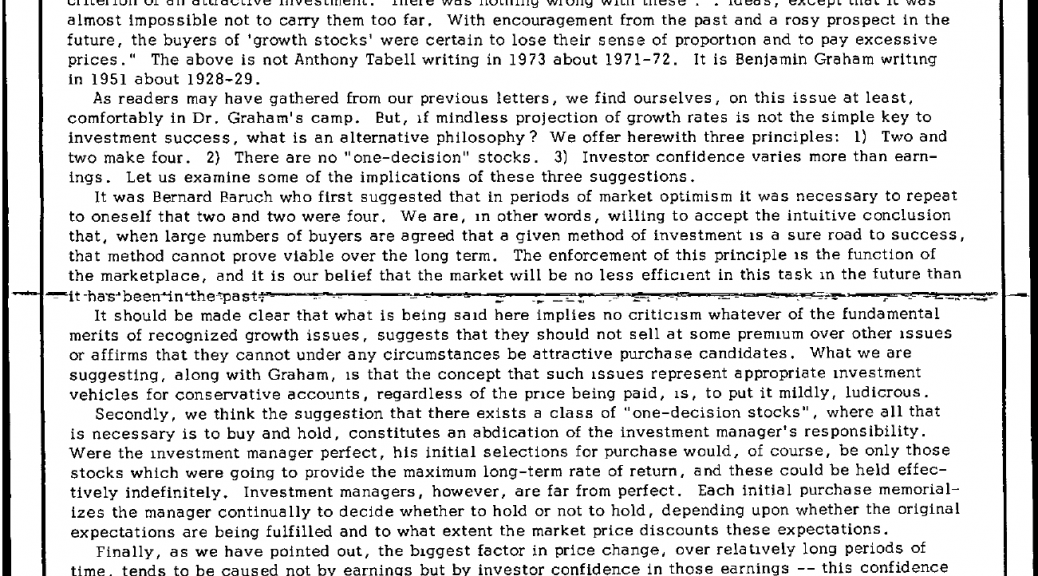 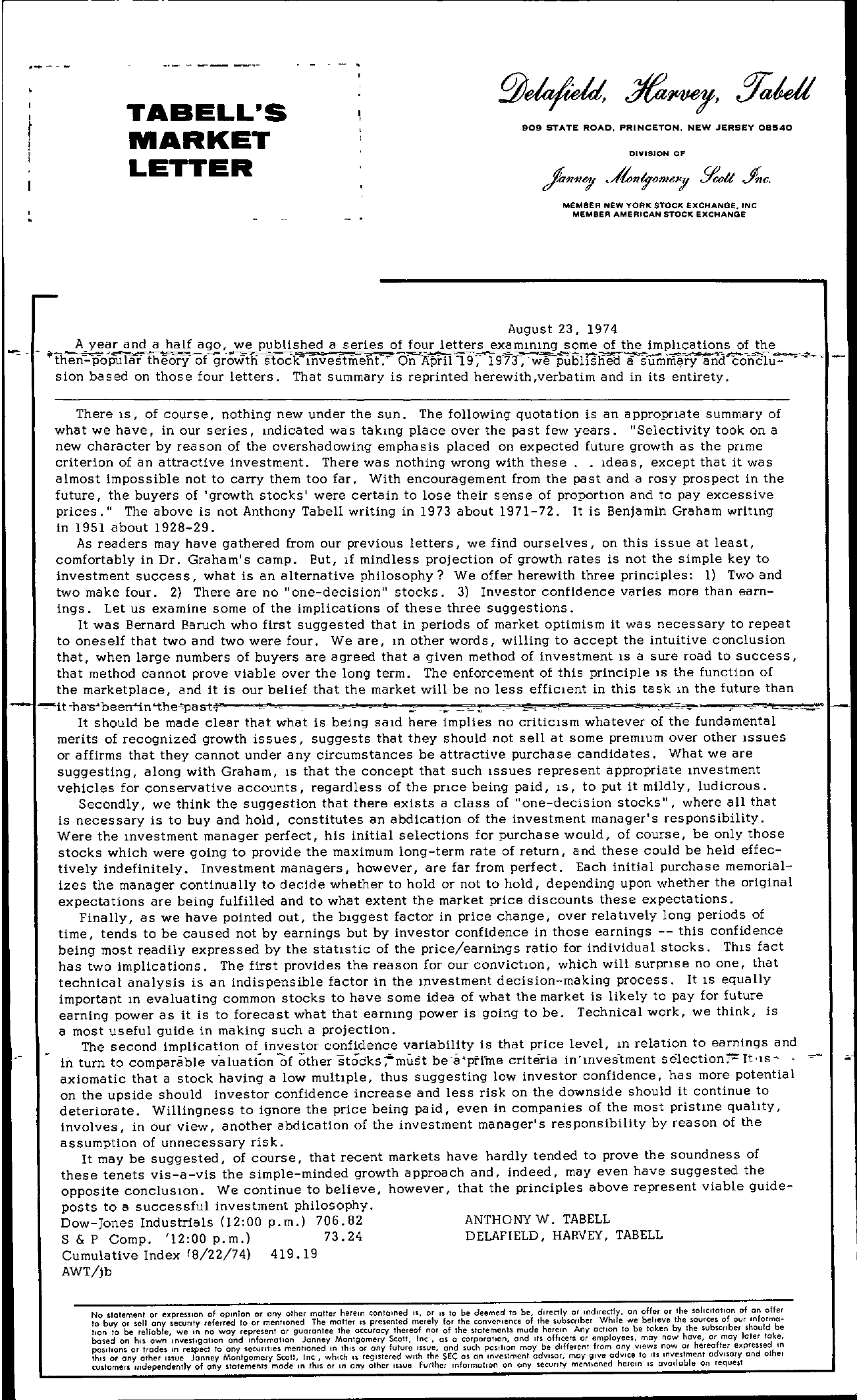