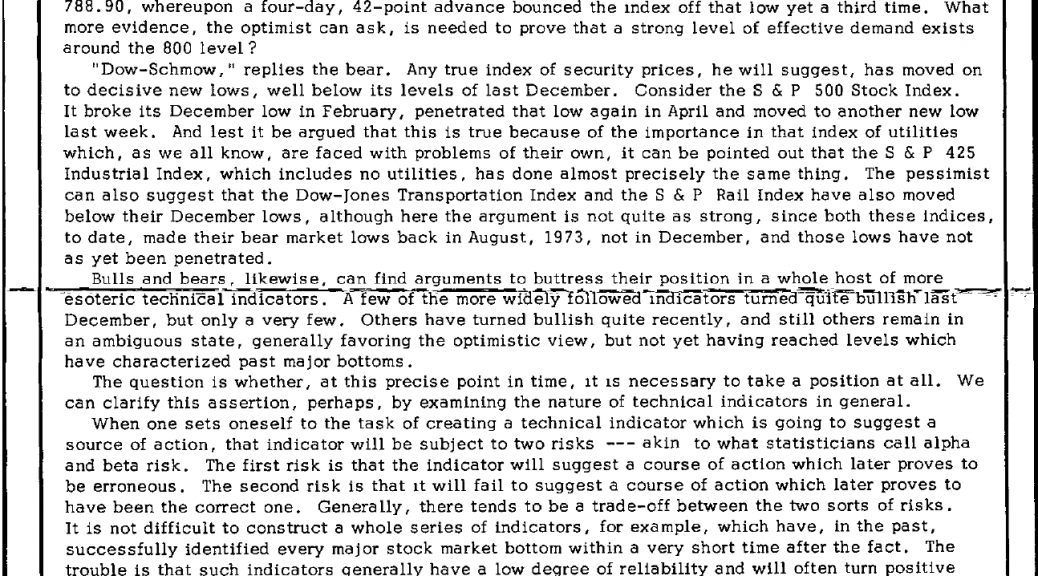 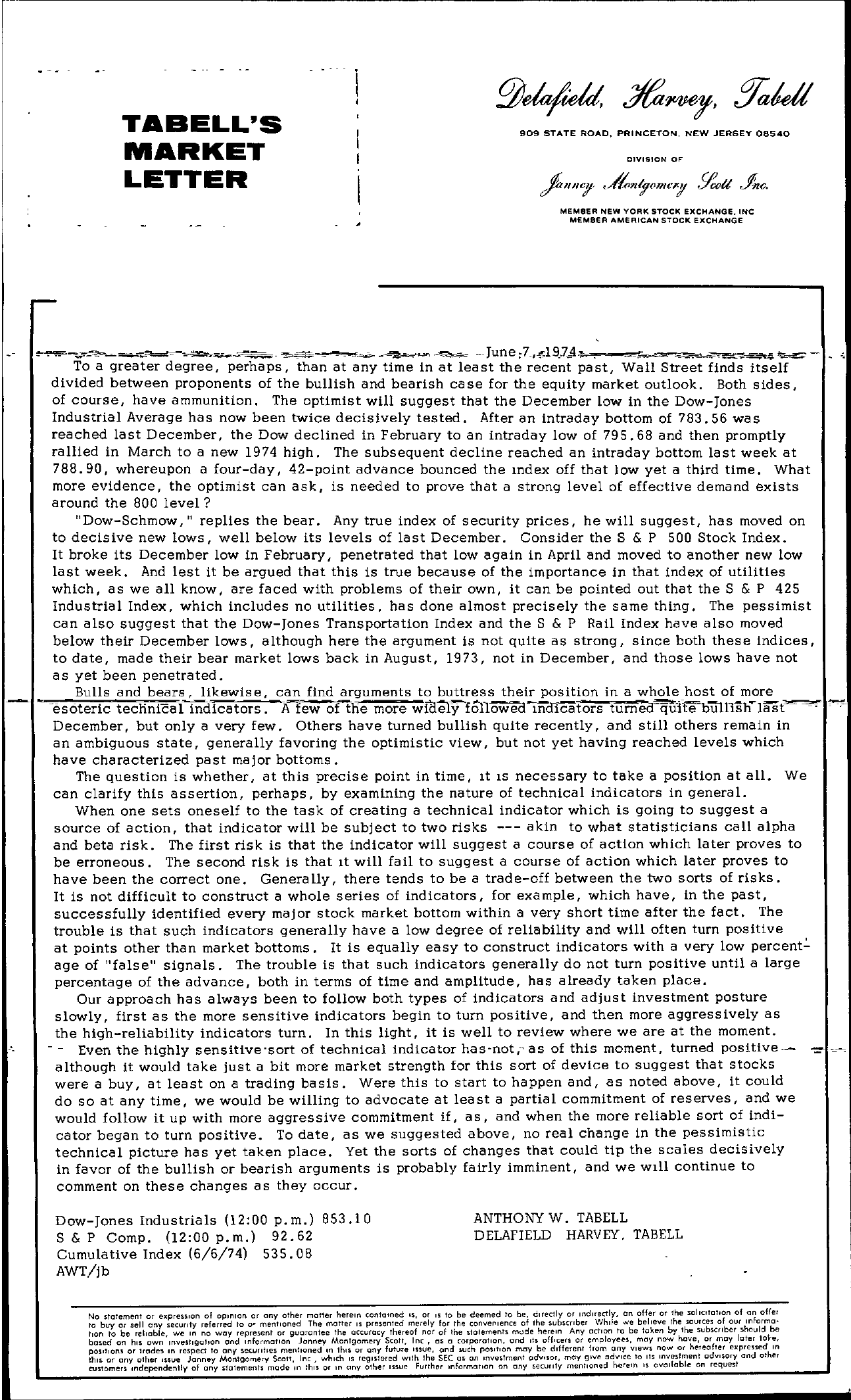 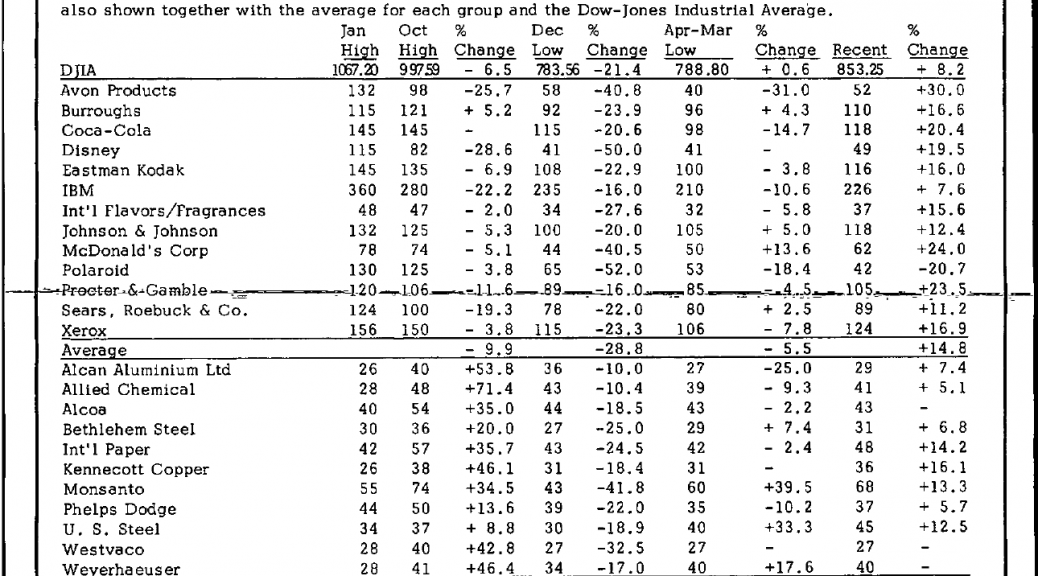 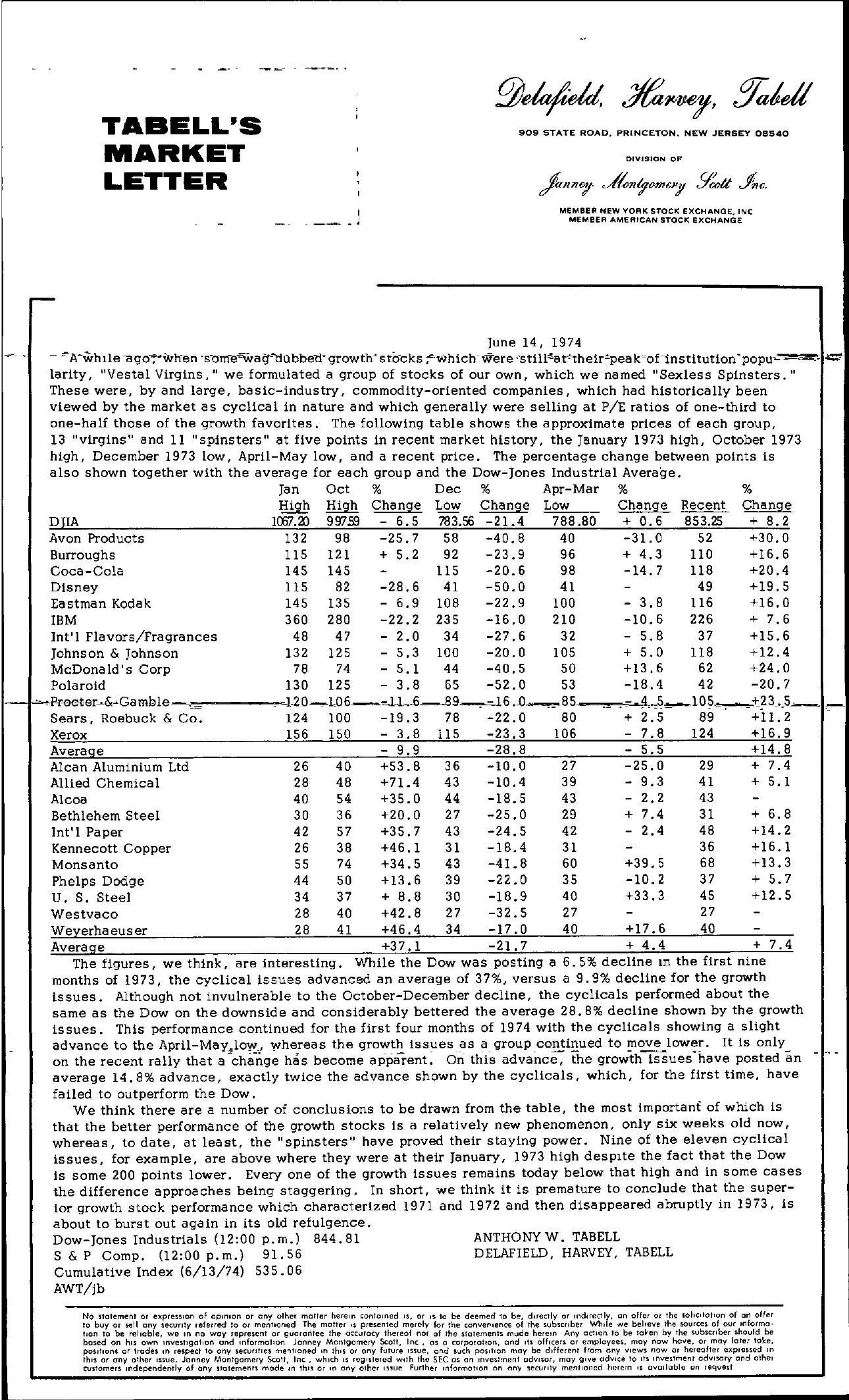 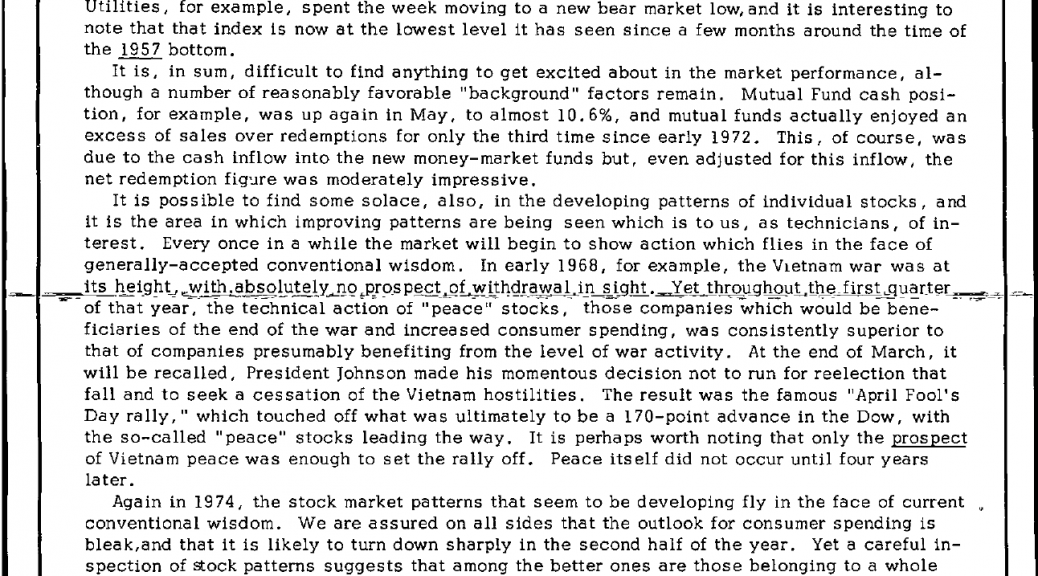 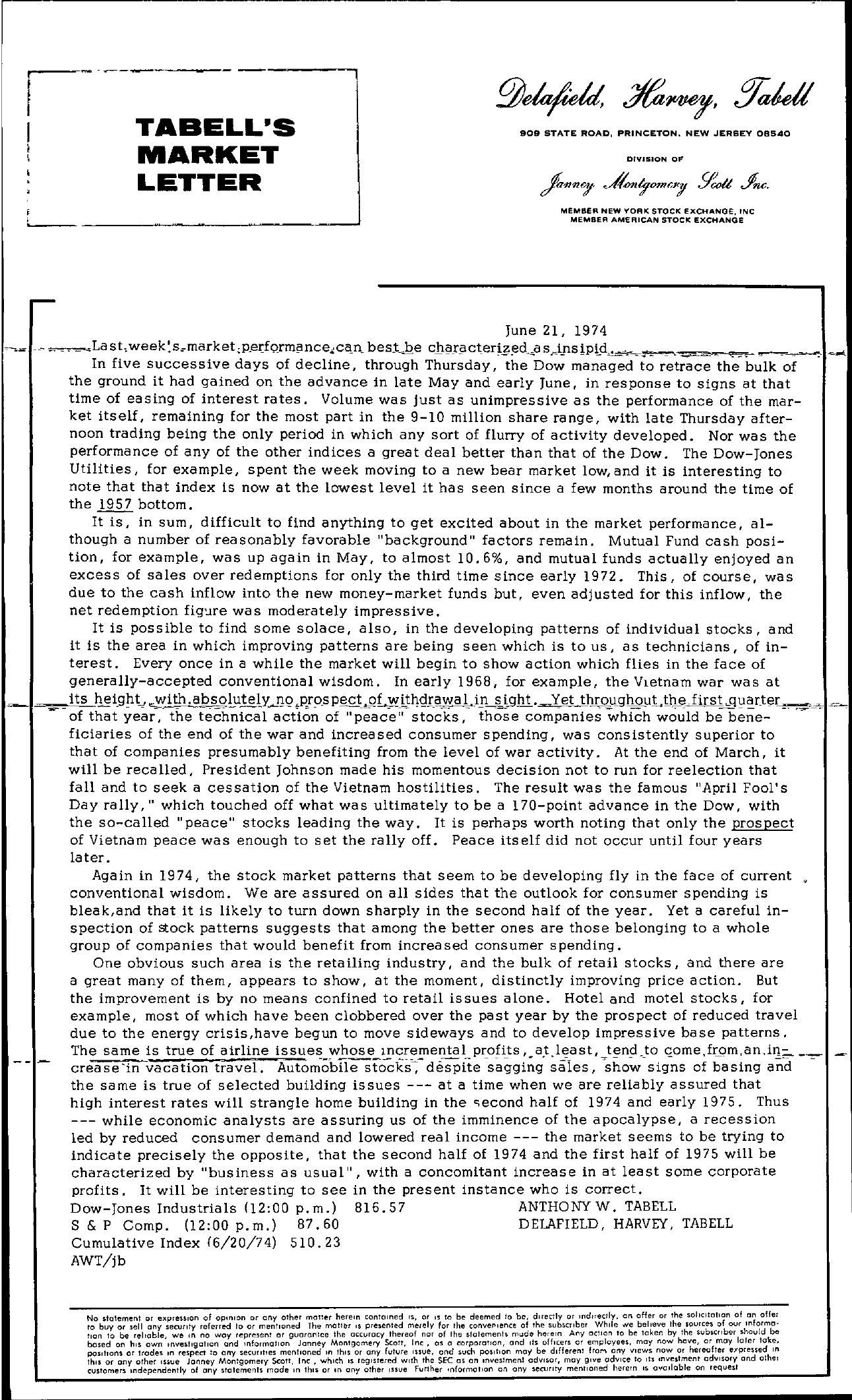 1..—— ——- I TABELL'S I ,\ MARKET LETTER 909 STATE ROAD, PRINCETON. NEW JERSEY 08540 DIVISION OF MEMBER NEW YORK STOCI( EXCHANGE, INC MEMBER AMERICAN STOCK EXCHANGE – June 21, 1974 n Last,weekscmarket,p,erf()rmance,can. best.be cbi3J9cteriEda siJ1sipi.d . .—– ……. In five successive days of decline, through Thursday, the Dow managed to retrace the bulk of the ground it had gained on the advance in late May and early June, in response to signs at that time of easing of interest rates, Volume was just as unimpressive as the performance of the mar- ket itself, remaining for the most part in the 9-10 million share range, with late Thursday after- noon trading being the only period in which any sort of flurry of activity developed. Nor was the performance of any of the other indices a great deal better than that of the Dow. The Dow-Jones Utilities, for example, spent the week moving to a new bear market low,and it is interesting to note that that index is now at the lowest level it has seen since a few months around the time of the 1957 bottom. It is, in sum, difficult to find anything to get excited about in the market performance, al- though a number of reasonably favorable background factors remain. Mutual Fund cash posi- tion, for example, was up again in May, to almost 10.6, and mutual funds actually enjoyed an excess of sales over redemptions for only the third time since early 1972. This, of course, was due to the cash inflow into the new money-market funds but, even adjusted for this inflow, the net redemption fig'.lre was moderately impressive. It is possible to find some solace, also, in the developing patterns of individual stocks, and it is the area in which improving patterns are being seen which is to us, as technicians, of in- terest. Every once in a while the market will begin to show action which flies in the face of generally-accepted conventional wisdom. In early 1968, for example, the Vletnam war was at I-I.,,i.,t-s.h-,,,eight, .,cNith .absolute!yf!Q .p'ros pect .9!.wlJ1!9rawal in2.i.ght ..-.Let throu.ghout,1)1y first quartEl — of that year-, the technical act'ioTl of peac'e stocks thOSe companieswhlCh would bebene- -..-' ficiaries of the end of the war and increased consumer spending, was consistently superior to that of companies presumably benefiting from the level of war activity. At the end of March, it will be recalled, President Johnson made his momentous decision not to run for reelection that fall and to seek a cessation of the Vietnam hostilities. The result was the famous April Fool's Day rally, which touched off what was ultimately to be a 170-point advance in the Dow, with the so-called peace stocks leading the way. It is perhaps worth noting that only the prospect of Vietnam peace was enough to set the rally off. Peace itself did not occur until four years later. Again in 1974, the stock market patterns that seem to be developing fly in the face of current , conventional wisdom. We are assured on all sides that the outlook for consumer spending is bleak,and that it is likely to turn down sharply in the second half of the year. Yet a careful in- spection of stock patterns suggests that among the better ones are those belonging to a whole group of companies that would benefit from increased consumer spending. One obvious such area is the retailing industry, and the bulk of retail stocks, and there are a great many of them, appears to show, at the moment, distinctly improving price action. But the improvement is by no means confined to retail issues alone. Hotel and motel stocks, for example, most of which have been clobbered over the past year by the prospect of reduced travel due to the energy crisis,have begun to move sideways and to develop impressive base patterns. The same is true of airline issues whose mcremental profits, at)east, tend,to Qome,frgm,an.in… crea se 'in vacation travel. Autom'C;bUestOcks';- despite -saggi;g' sa-les, sho;' signs of baSing and – the same is true of selected building issues — at a time when we are reliably assured that high interest rates will strangle home building in the second half of 1974 and early 1975. Thus — while economic analysts are assuring us of the imminence of the apocalypse, a recession led by reduced consumer demand and lowered real income — the market seems to be trying to indicate precisely the opposite, that the second half of 1974 and the first half of 1975 will be characterized by business as usual , with a concomitant increase in at least some corporate profits. It will be interesting to see in the present instance who is correct. Dow-Jones Industrials (1200 p.m,) 816.57 ANTHONYW. TABELL S & P Compo (1200 p.m.) 87.60 DELAFIELD, HARVEY, TAB ELL Cumulative Index (6/20/74) 510,23 AWT/jb No statement or expression of opinion or cny other moiler herein contolned IS, or IS to be deemed to be, directly or indirectly, on offer or the sol,cltot,on 01 on offer to buy or sell any seCt.Jrlly referred to or mentioned The mallnr IS presented merely for the convef'lencs of the subscriber While e believe the sources of our information to be reliable, we In no way represent or guarantee the accuracy thereof nor of the statements mode herein Any action to be loken by the subscriber should be bosed on hiS own Invetlgotlon and Information Janney Montgomery Scott, Inc, as a corporation, and liS offIcers or employees, may now have, or may loter toke, positrons or trades In respect to any securities mentioned In thiS or any future Issue, and such pOSitIon may be different frOM any views now or hercoher e1pressed In thiS or any other Issue Janney Montgomery Scali, Inc, which IS regiSTered With the SEC as an mvestment adVisor, may gIve adVice to Its mvestment adVisory and othel customers Independently of any statements mode ,n thiS or In any other Issue Further ,formation on any security mentIOned herein IS available on request 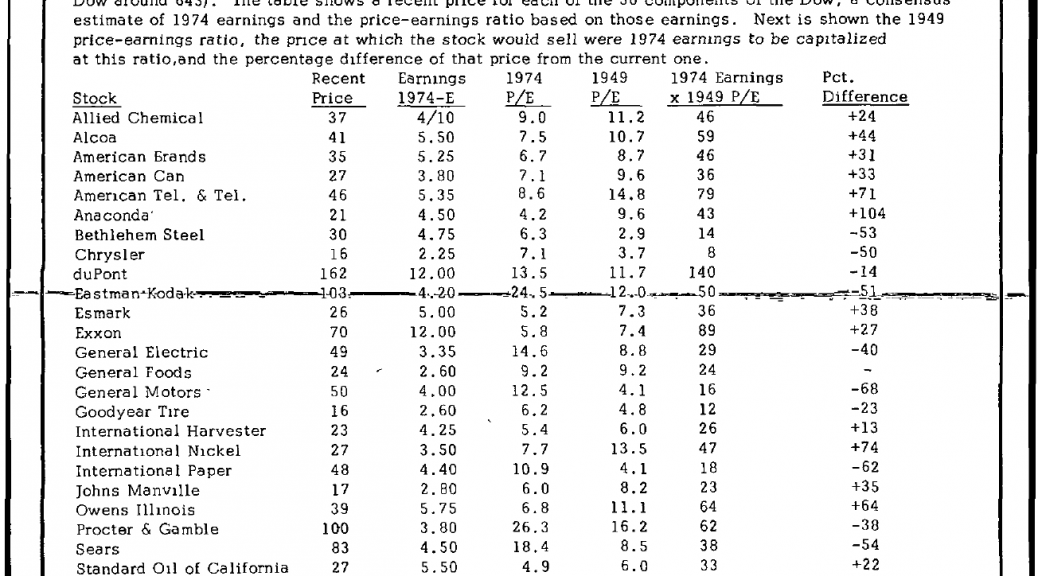 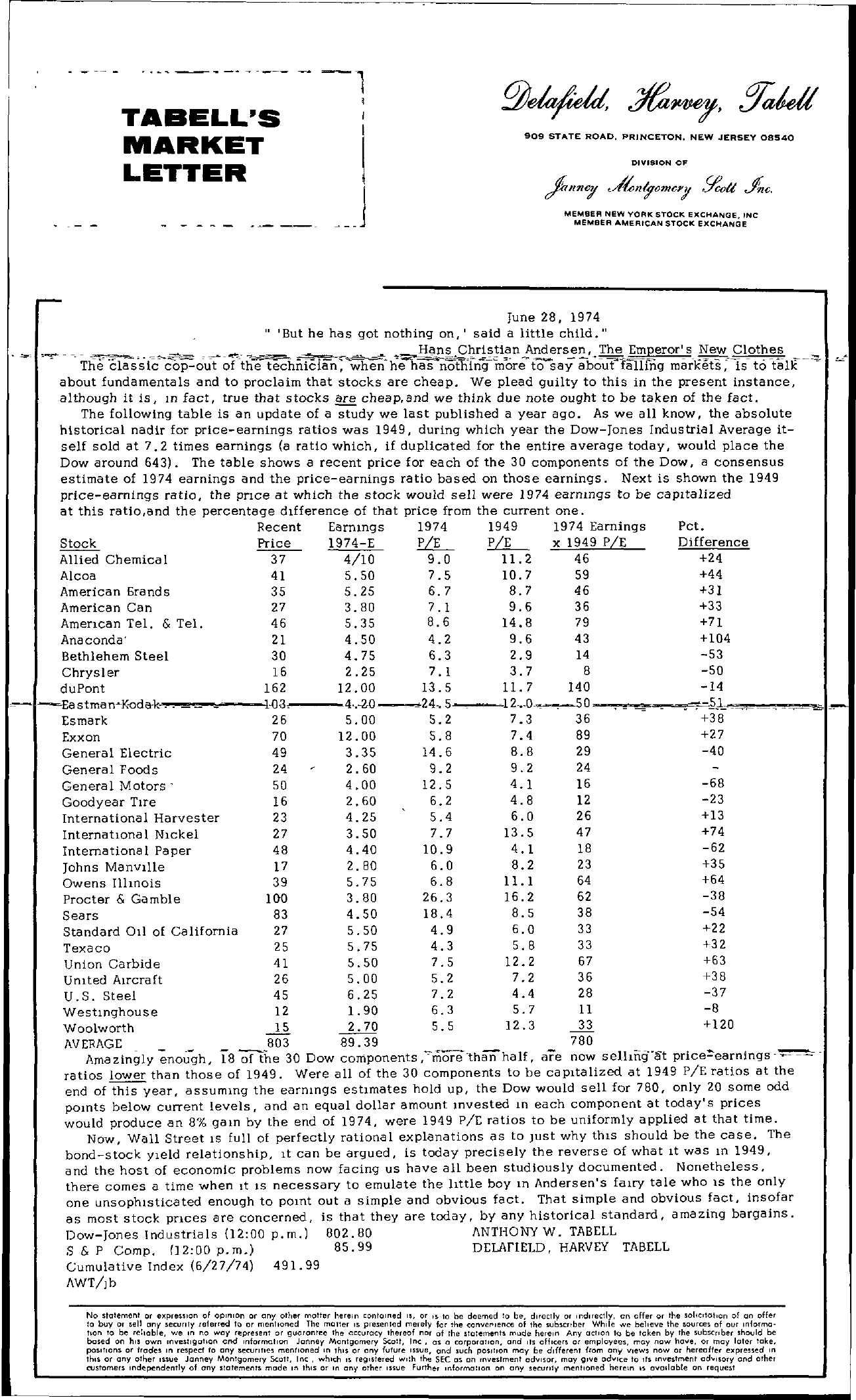