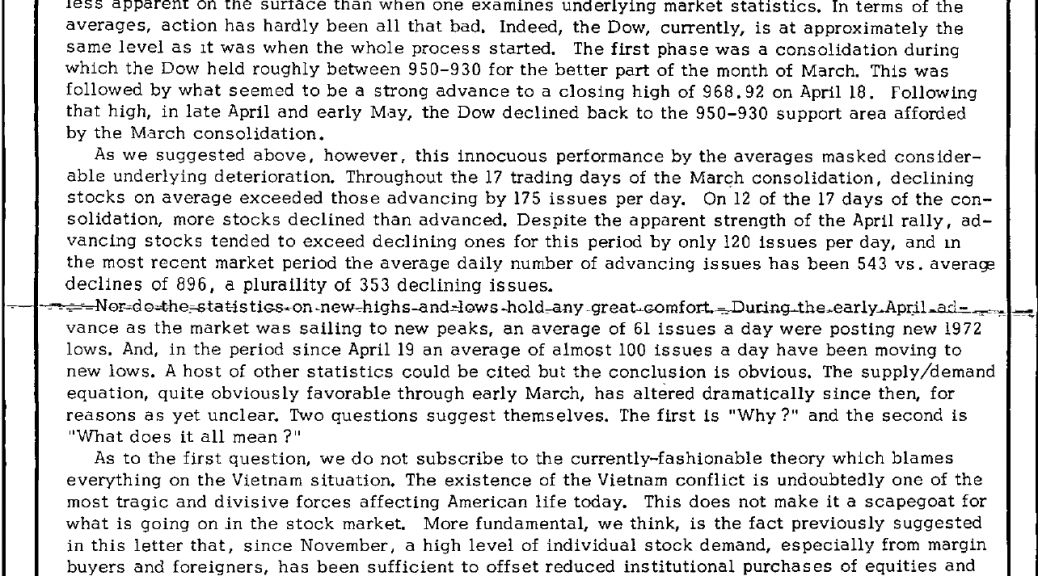 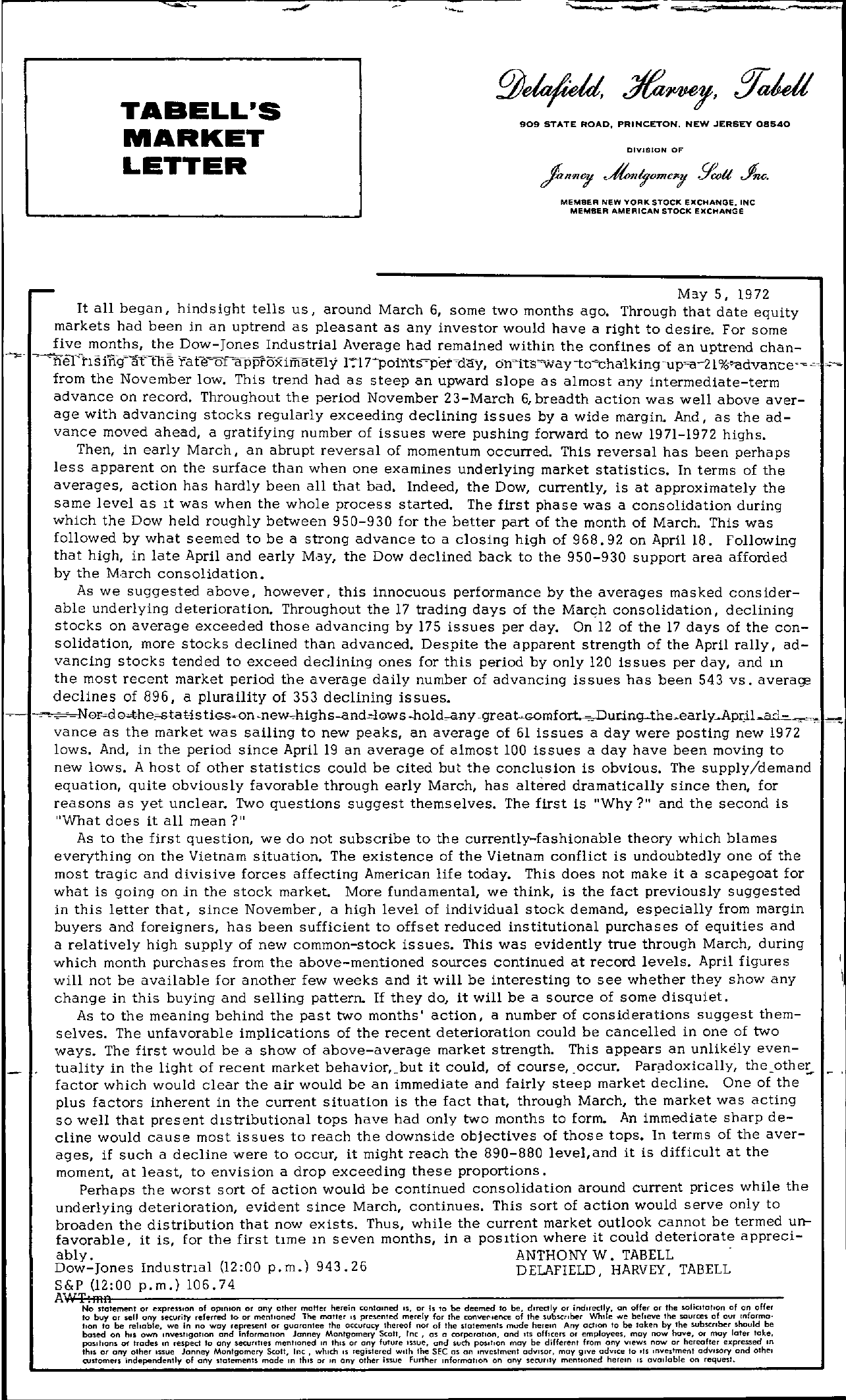 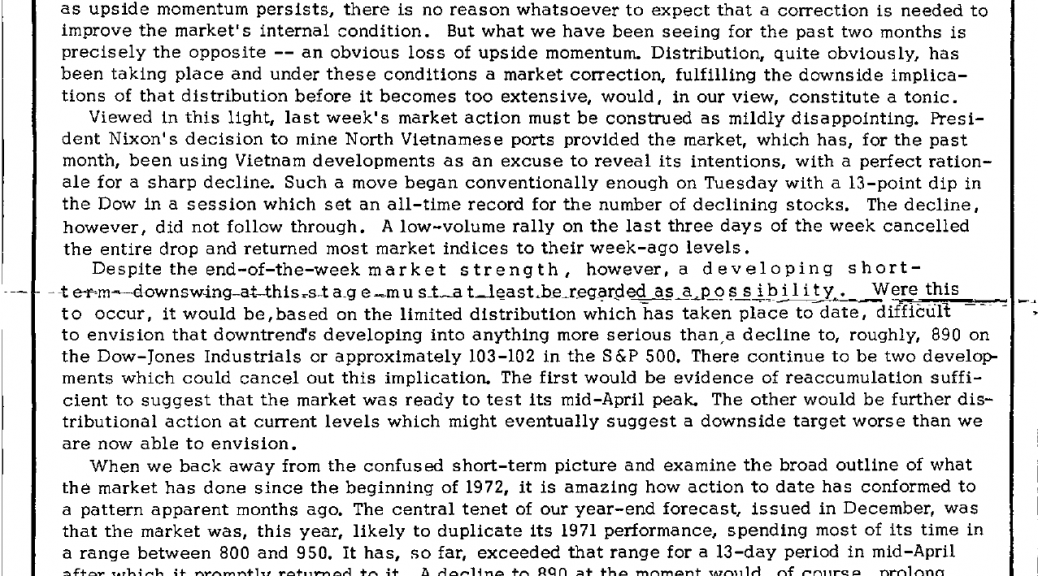 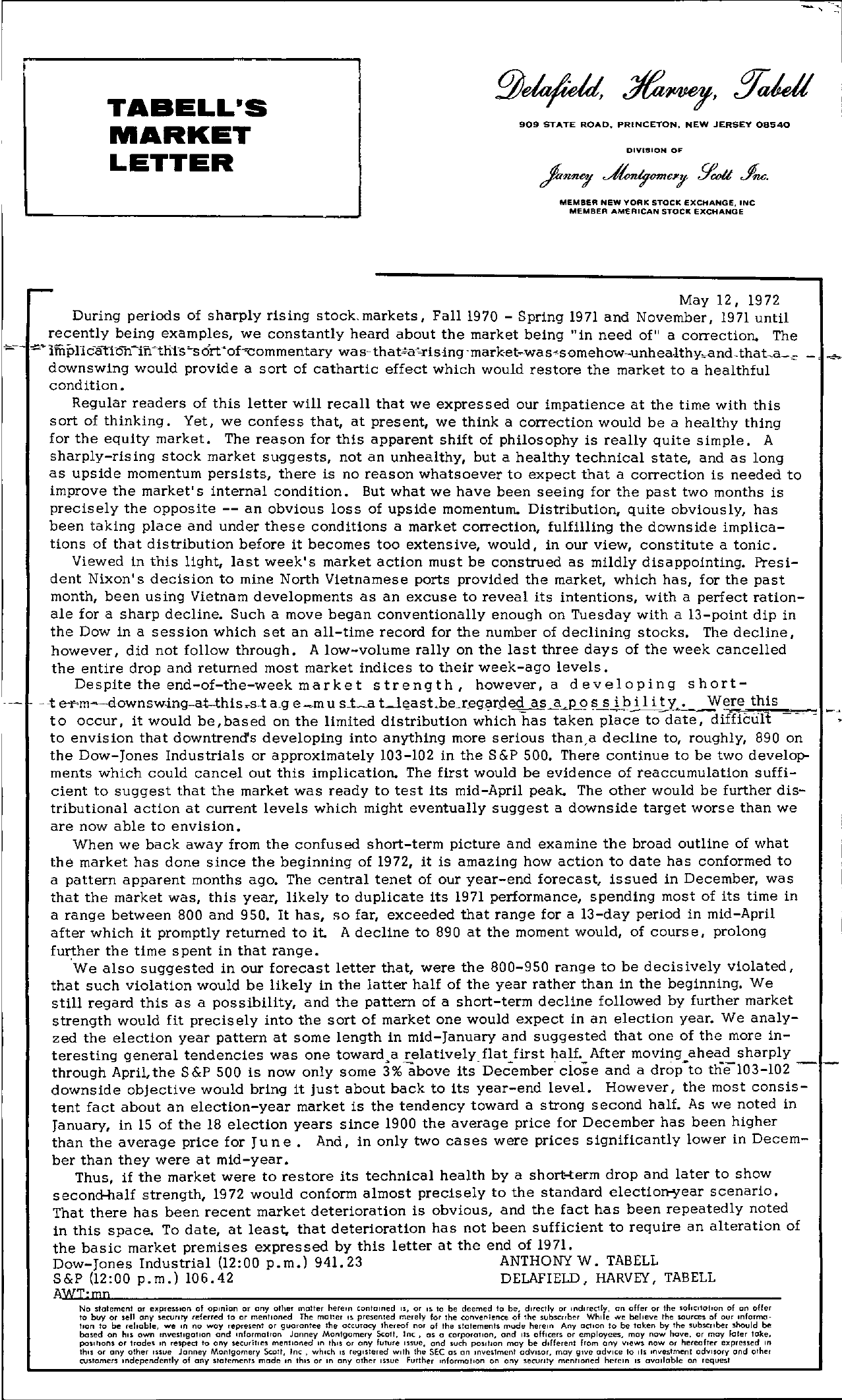 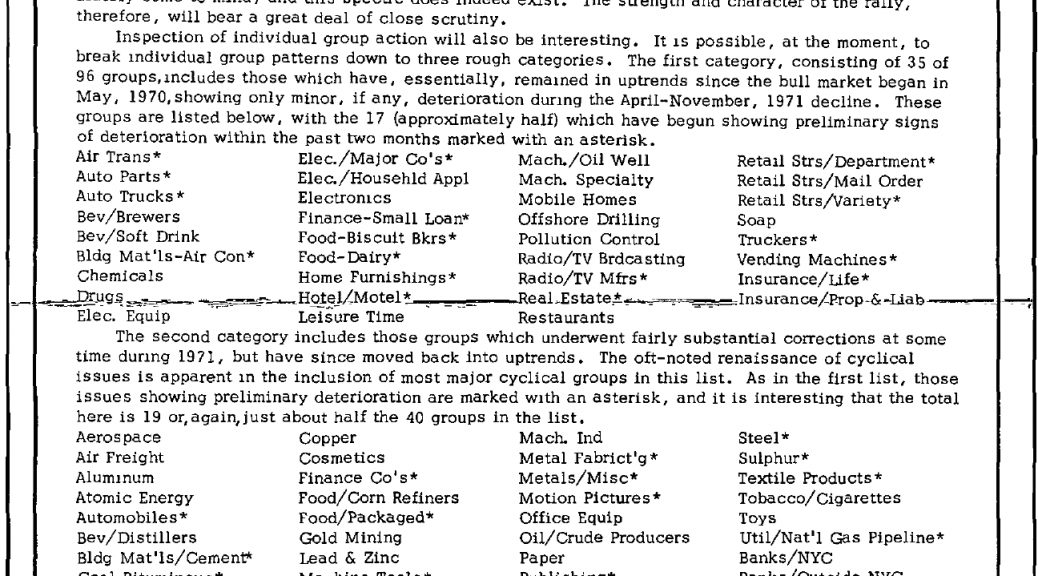 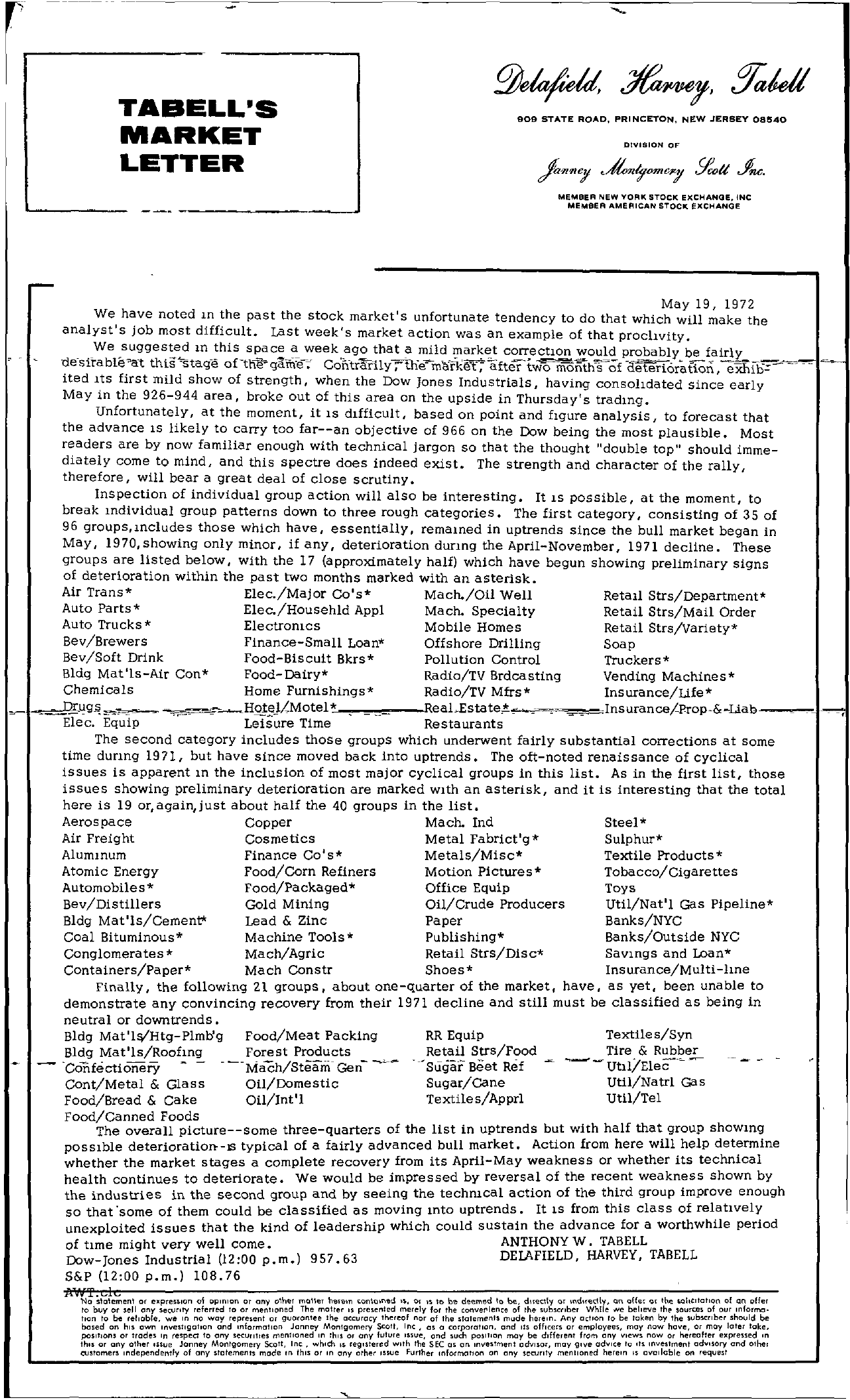 TABELL'S MARKET LETTER ————-.– 909 STATE ROAD, PRINCETON, NEW JERSEY 08540 DIYISION OF MEMBER NEW VORK STOCK EXCHANoe, INC MEMBER AMERICAN STOCK eXCHANGE May 19, 1972 We have noted In the past the stock market's unfortunate tendency to do that which will make the analyst's job most difficult. Last week's market action was an example of that proclIvity. We suggested In this space a week ago that a mild market correctIOn would probably be fairly 'desitable1ft this'5tage onlW'gaITfe-; Contrarily ;-th'emaik'-f;aftertwo moi'ith's-of -deterioration, eXhrD — – .. ited ItS first mild show of strength, when the Dow Jones Industrials, having consolIdated since early May in the 926-944 area, broke out of this area on the upside in Thursday's tradIng. Unfortunately, at the moment, it IS dIfficult, based on pOint and fIgure analYSiS, to forecast that the advance IS likely to carry too far–an objective of 966 on the Dow being the most plaUSible. Most readers are by now familiar enough with technical Jargon so that the thought double top should immediately come to mind, and this spectre does indeed exist. The strength and character of the rally, therefore, will bear a great deal of close scrutiny. Inspection of individual group action will also be interesting. It IS possible, at the moment, to break Individual group patterns down to three rough categories. The first category, conSisting of 35 of 96 groups,Includes those which have, essentially, remaIned in uptrends since the bull market began in May, 1970, showing only minor, if any, deterioration dunng the April-November, 1971 decline. These groups are listed below, with the 17 (approximately half) which have begun showing preliminary Signs of deterioration within the past two months marked with an asterisk. Air Trans Elec./Major Co's Mach./Oil Well RetaIl Strs/Department Auto Parts Elec./Househld Appl Mach. Specialty Retail Strs/Mail Order Auto Trucks Electrorucs Mobile Homes Retail Strs/Variety Bev/Brewers Finance-Small Loan Offshore Drilling Soap Bev/Soft Drink Food-Biscuit Bkrs Pollution Control Truckers Bldg Mat'ls-Air Con Food-Dairy Radio/TV Brdcasting Vending Machines Chemicals .-..–Orugs .. -Ele-c. 'Equip Home Furnishings Hotel.LMotel … …. Leisure Time . Radio/TV Mfrs ReaLEstate.. Restaurants Ins urance/Ufe Insurance;l'rop.&-Uab–I—; The second category includes those groups which underwent fairly substantial corrections at some time dunng 1971, but have since moved back into uptrends. The oft-noted renaissance of cyclical issues is apparent In the inclusion of most major cyclical groups in this list. As in the first list, those issues showing preliminary deterioration are marked WIth an asterisk, and it is interesting that the total here is 19 or,again,just about half the 40 groups in the list. Aerospace Copper Mach. Ind Steel Air Freight Cosmetics Metal Fabrict'g Sulphur AlumInum Finance Co's Metals/Misc Textile Products Atomic Energy Food/Corn Refiners Motion Pictures Tobacco/Cigarettes Automobiles Food/Packaged Office Equip Toys Bev/Distillers Gold Mining Oil/Crude Producers Util/Nat'l Gas Pipeline Bldg Mat'ls/Cement Lead & Zinc Paper Banks/NYC Coal Bituminous Machine Tools Publishing Banks/Outside NYC Conglomerates Mach/Agric Retail Strs/Disc SavIngs and Loan Containers/Paper Mach Constr Shoes Insurance/Multi-lIne Finally, the following 21 groups, about one-quarter of the market, have, as yet, been unable to demonstrate any convincing recovery from their 1971 decline and still must be classified as being in neutral or downtrends. Bldg Mat'lq/Htg-Plmb'g Food/Meat Packing RR Equip Textiles/Syn —Bldg Mat'ls/RoofIng Forest Products Confectionery — . -'Mach/Steam Gen- Retail StrS/Food Tire & Rubber . 'Sugar Beet Ref –UuI/Elec- – -.- Cont/Metal & Glass Oil/Domestic Sugar/cane Util/Natrl Gas Food/Bread & Cake Oil/Int'l Textiles/Apprl Util/Tel Food/Canned Foods The overall picture–some three-quarters of the list in uptrends but with half that group shOWIng pOSSIble deterioratioI-lS typical of a fairly advanced bull market. Action from here will help determine whether the market stages a complete recovery from its April-May weakness or whether its technical health continues to deteriorate. We would be impressed by reversal of the recent weakness shown by the industries in the second group and by seeing the techrucal action of the third group improve enough so that 'some of them could be classified as moving Into uptrends. It IS from this class of relatIvely unexploited issues that the kind of leadership which could sustain the advance for a worthwhile period of tIme might very well come. Dow-Jones Industrial (1200 p.m.) 957.63 ANTHONY W. TABELL DEIAFIELD, HARVEY, TABELL S&P (1200 p.m.) 108.76 AVf'f .ele No stotement or exprenlon of opinion or any 01nel motter hHen contoll'led I, Of l!i 10 be deemed to be, dHlldly or mdlrectly, 01'1 offer or the lOhCltatlOI'l of an offer to buy or lell any seCUrity referred to or mentioned The motler IS preel'lted merely for the cOl'lVe('lenc5 of the subSCriber While e believe thE' sources of our mformo tlon to be reliable, we In no way represent or guoronlee the accuracy thereof nor of the statements mude herem. Any oellon 10 be token by the s….bscrlber should be based on hiS own Investlgahon and mformatlon Janney Montgomery Seat!, Inc, os 0 corporation, and Its officers or employees, may now have, or may later take, polllJOm or trades In respect to any Securilies mentioned m thiS or any ' …. ture Issue, and such posItion may be different from any views now or hereafter exprened In thiS or any other ISSue Janney Montgomery Scott, Inc, which IS registered With the SEC os on Investment adVisor, may give adVice to Its II'IVetment adVISOry and olhel customers Independently of any statements mode In thiS or In any other Issue Further Informallon on any security mentioned herem IS available on request 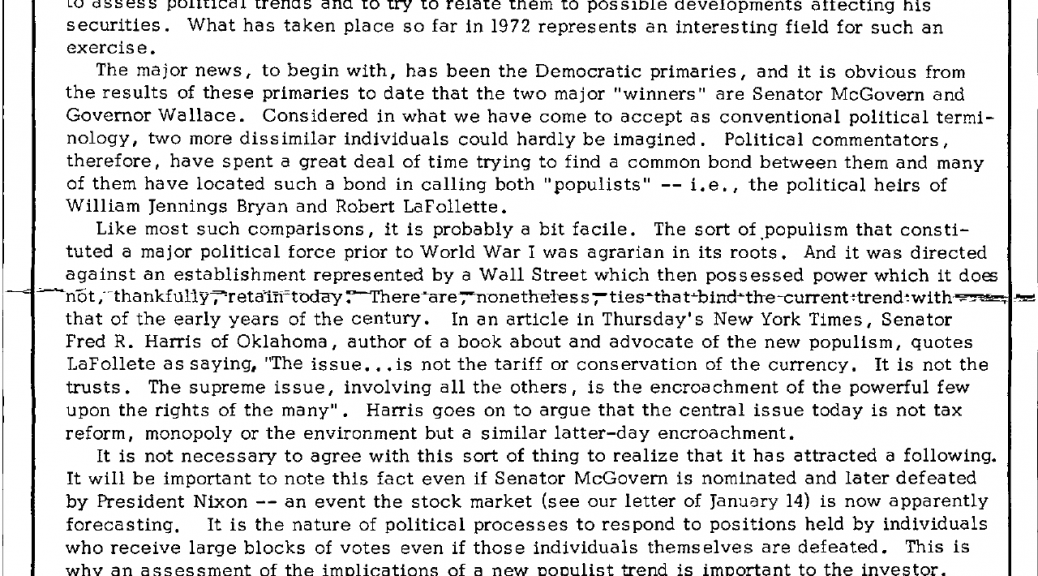 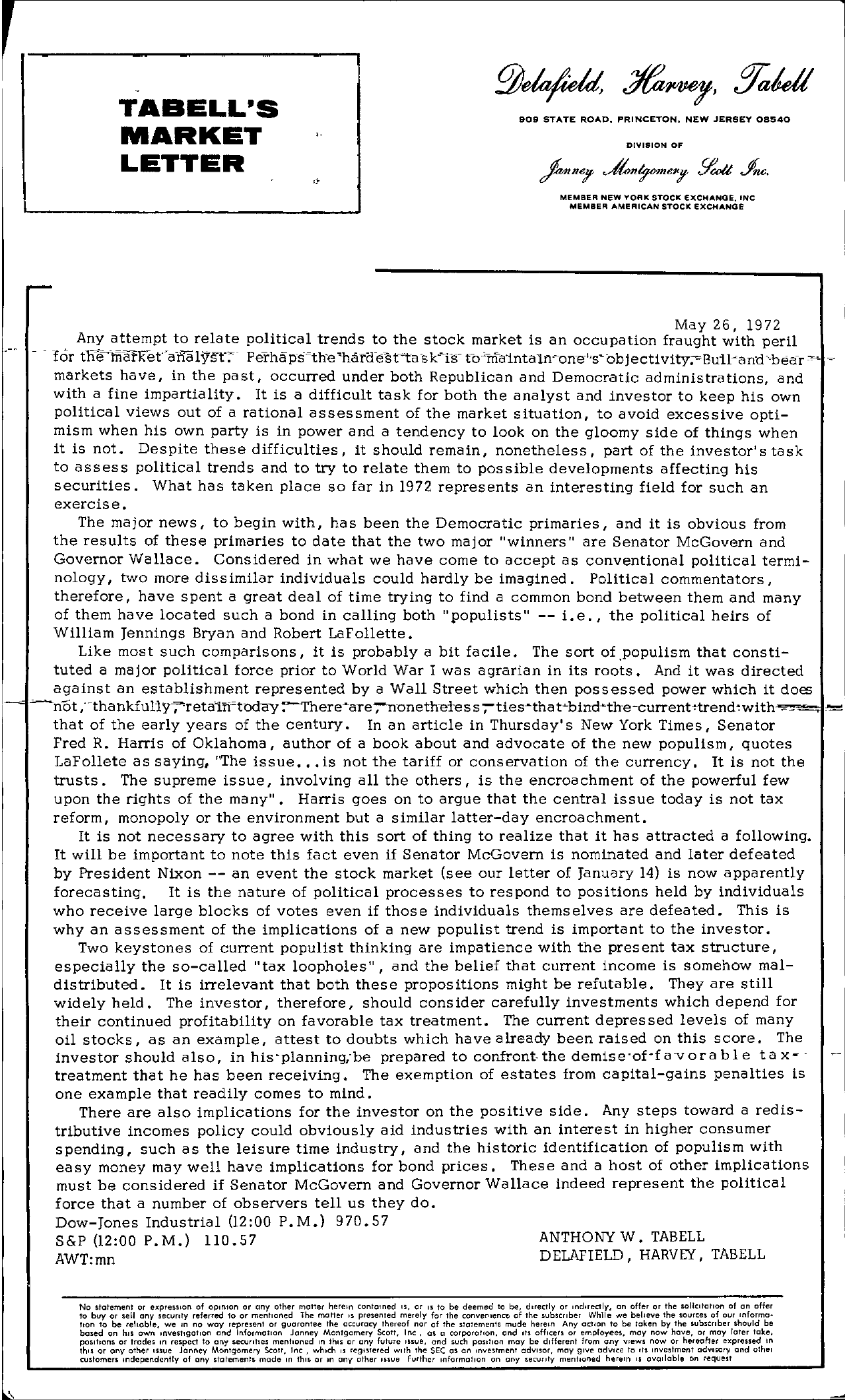 TABELL'S MARKET LETTER ., 909 STATE ROAD. PRINCETON. NEW JERSEY 08540 DIYISION OF MEMBER NEW YORK STOCK EXCHANGE, INC MEMBER AMERICAN STOCK EXCHANGE – May 26, 1972 Any attempt to relate political trends to the stock market is an occupation fraught with peril – – Ior tli-efiiatKet'-analysC Perhaps-the hara-esFtasknrtoma-intaln'-one-s'bbjecti vity;Bu'Wami bea-r – markets have, in the past, occurred under both Republican and Democratic administrations, and with a fine impartiality. It is a difficult task for both the analyst and investor to keep his own political views out of a rational assessment of the market situation, to avoid excessive opti- mism when his own party is in power and a tendency to look on the gloomy side of things when it is not. Despite these difficulties, it should remain, nonetheless, part of the investor's task to assess political trends and to try to relate them to possible developments affecting his securities. What has taken place so far in 1972 represents an interesting field for such an exercise. The major news, to begin with, has been the Democratic primaries, and it is obvious from the results of these primaries to date that the two major winners are Senator McGovern and Governor Wallace. Considered in what we have come to accept as conventional political termi- nology, two more dissimilar individuals could hardly be imagined. Political commentators, therefore, have spent a great deal of time trying to find a common bond between them and many of them have located such a bond in calling both populists — Le., the political heirs of William Jennings Bryan and Robert LaFollette. Like most such comparisons, it is probably a bit facile. The sort of .populism that consti- tuted a major political force prior to World War I was agrarian in its roots. And it was directed against an establishment represented by a Wall Street which then possessed power which it dOES I not ;-tha nkful1yretaifjtodoy -rhereaTe7n-oneth-etes s;- tiesthatbindth'e-currenttrend'with ' that of the early years of the century. In an article in Thursday's New York Times, Senator Fred R. Harris of Oklahoma, author of a book about and advocate of the new populism, quotes LaFollete as saying, The issue … is not the tariff or conservation of the currency. It is not the trusts. The supreme issue, involving all the others, is the encroachment of the powerful few upon the rights of the many. Harris goes on to argue that the central issue today is not tax reform, monopoly or the environment but a similar latter-day encroachment. It is not necessary to agree with this sort of thing to realize that it has attracted a following. It will be important to note this fact even if Senator McGovern is nominated and later defeated by President Nixon — an event the stock market (see our letter of January 14) is now apparently forecasting. It is the nature of political processes to respond to positions held by individuals who receive large blocks of votes even if those individuals themselves are defeated. This is why an assessment of the implications of a new populist trend is important to the investor. Two keystones of current populist thinking are impatience with the present tax structure, especially the so-called tax loopholes , and the belief that current income is somehow mal- distributed. It is irrelevant that both these propositions might be refutable. They are still widely held. The investor, therefore, should consider carefully investments which depend for their continued profitability on favorable tax treatment. The current depres sed levels of many oil stocks, as an example, attest to doubts which have already been raised on this score. The investor should also, in his'planning;be prepared to confront-the demise-of-fa-vorable tax-' treatment that he has been receiving. The exemption of estates from capital-gains penalties is one example that readily comes to mind. There are also implications for the investor on the positive side. Any steps toward a redis- tributive incomes policy could obviously aid industries with an interest in higher consumer spending, such as the leisure time industry, and the historic identification of populism with easy money may well have implications for bond prices. These and a host of other implications must be considered if Senator McGovern and Governor Wallace indeed represent the political force that a number of observers tell us they do. Dow-Jones Industrial (1200 P.M.) 970.57 S&P (1200 P.M.) 110.57 AWTmn ANTHONY W. TABELL DELAFIELD, HARVEY, TAB ELL No statement or expression of OpinIon or any other matter herein contOlned IS, or 15 to be deemed to be, directly or mdlrectly, on offer or the solicltotlon of on offer to buy or sell any security referred 10 or mentioned The moiler IS presented merely for the convef'len of the subscriber While we believe the sources of our Informa han 10 be rehable, we In no woy represenl or guarantee the accuracy thereof nor of the statements mude herein Any oOlon 10 be token by Ihe subSCriber should be based on hiS own inVeSTigation and Information Janney Montgomery Scott, Inc, as 0 corporation, and Its officers or employees, may now have, or may later toke, poslhons Of trades m respeo to any securlhes mentioned In thiS or any future Issue, and such poSition mey be dlfferenl from any views now or hereafter expressed In thiS or any other Issue Janney Montgomery Scott, Inc, which IS registered Wllh the SEC as on Investment adVisor, may give adVice 10 lIs Investment adVISory and olhel customers Independently of any statements made In thiS or m any other Issue Further information on any security mentioned herem IS available on request