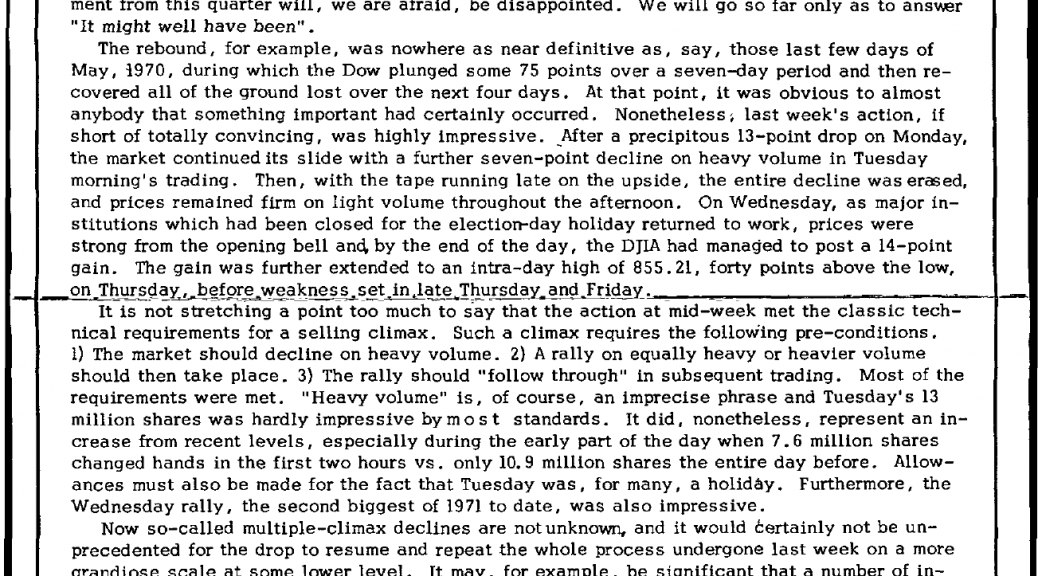 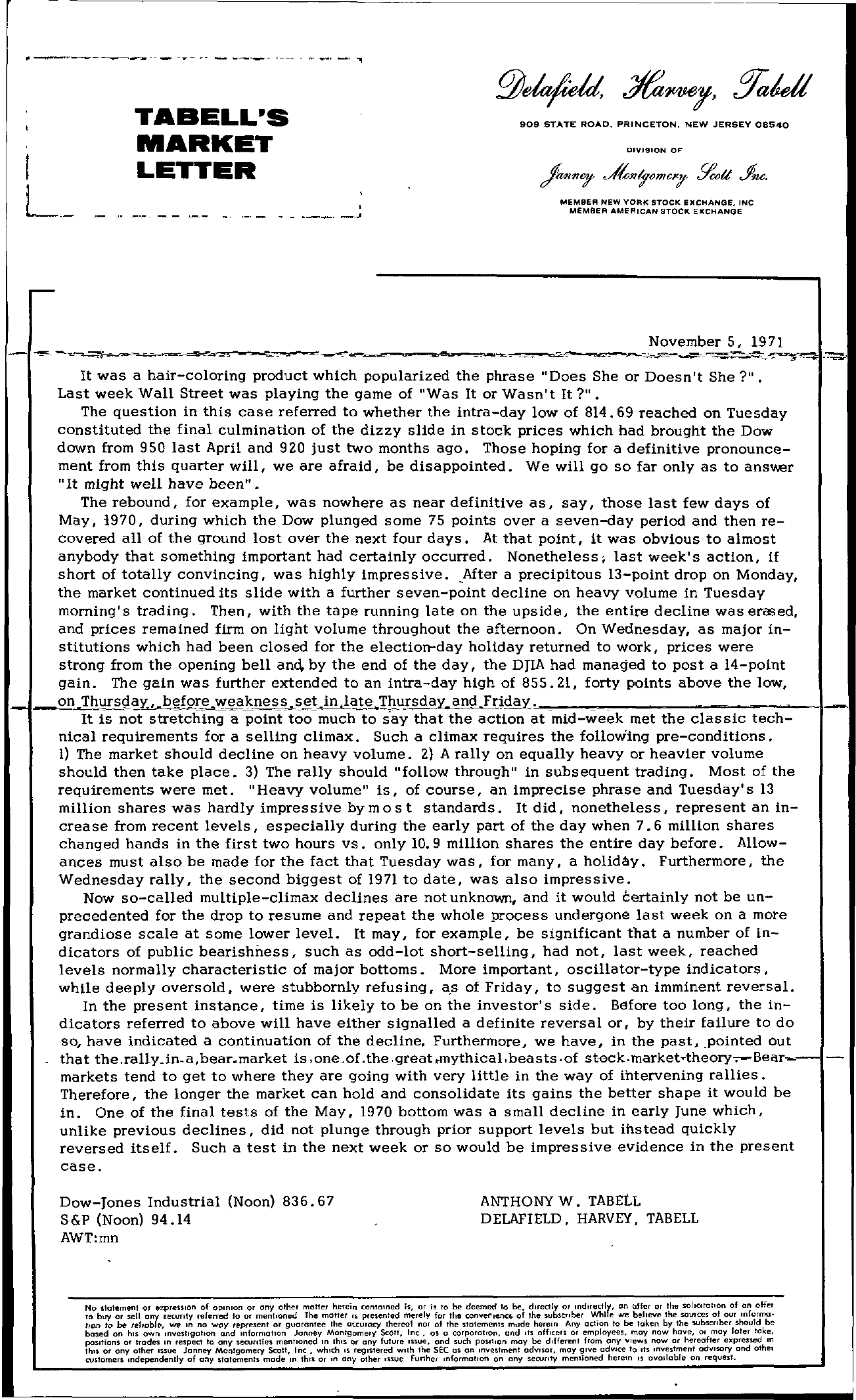 , ..- r – ! L TABELL-S MARKET LETTER '– –' 909 STATE ROAD, PRINCETON. NEW JERSEY 08540 DIVISION OF MEMBER NEW YORK STOCI( EXCHANGE. INC MEMBER AMERICAN STOCK eXCHANGE It was a hair-coloring product which popularized the phrase Does She or Doesn't She. Last week Wall Street was playing the game of Was It or Wasn't It. The question in this case referred to whether the intra-day low of 814.69 reached on Tuesday constituted the final culmination of the dizzy slide in stock prices which had brought the Dow down from 950 last April and 920 just two months ago. Those hoping for a definitive pronouncement from this quarter will, we are afraid, be disappointed. We will go so far only as to ansv.er It might well have been. The rebound, for example, was nowhere as near definitive as, say, those last few days of May, 1970, during which the Dow plunged some 75 points over a seven-clay period and then recovered all of the ground lost over the next four days. At that point, it was obvious to almost anybody that something important had certainly occurred. Nonetheless; last week's action, if short of totally convincing, was highly impressive . .Mter a precipitous 13-point drop on Monday, the market continued its slide with a further seven-point decline on heavy volume in Tuesday morning's trading. Then, with the tape running late on the upside, the entire decline was erased, and prices remained firm on light volume throughout the afternoon. On Wednesday, as major institutions which had been closed for the election-day holiday returned to work, prices were strong from the opening bell and, by the end of the day, the DJIA had managed to post a 14-point gain. The gain was further extended to an intra-day high of 855.21, forty points above the low, 1 -2!1..!I!.urE.sIy;, bef9rllness.st inJ!.E.!!!ursday and Friday, —I It is not stretching a point too much to say that the action at mid-week met the classic technical requirements for a selling climax. Such a climax requires the following pre-conditions. 1) The market should decline on heavy volume. 2) A rally on equally heavy or heavier volume should then take place. 3) The rally should follow through in subsequent trading. Most of the requirements were met. Heavy volume is, of course, an imprecise phrase and Tuesday's 13 million shares was hardly impressive by m 0 s t standards. It did, nonetheless, represent an increase from recent levels, especially during the early part of the day when 7.6 million shares changed hands in the first two hours vs. only 10.9 million shares the entire day before. Allowances must also be made for the fact that Tuesday was, for many, a holiday. Furthermore, the Wednesday rally, the second biggest of 1971 to date, was also impressive. Now so-called multiple-climax declines are not unknown, and it would certainly not be unprecedented for the drop to resume and repeat the whole process undergone last week on a more grandiose scale at some lower level. It may, for example, be significant that a number of indicators of public bearishness, such as odd-lot short-selling, had not, last week, reached levels normally characteristic of major bottoms. More important, oscillator-type indicators, while deeply oversold, were stubbornly refusing, a,s of Friday, to suggest an imminent reversal. In the present instance, time is likely to be on the investor's side. Before too long, the indicators referred to above will have either signalled a definite reversal or, by their failure to do so, have indicated a continuation of the decline. Furthermore, we have, in the past, pointed out that the,rally.in.a,bear.market is,one.of.the,great,mythical,beasts.of steck.marketTtheory.-Bear—- -markets tend to get to where they are going with very little in the way of intervening rallies. Therefore, the longer the market can hold and consolidate its gains the better shape it would be in. One of the final tests of the May, 1970 bottom was a small decline in early June which, unlike previous declines, did not plunge through prior support levels but ihstead quickly reversed itself. Such a test in the next week or so would be impressive eVidence in the present case. Dow-Jones Industrial (Noon) 836.67 S&P (Noon) 94.14 AWTmn ANTHONY W. TABELL DELAFIELD, HARVEY, TAB ELL No statement Of expression of opinion or any other matter herein conTolned is, or is to be deemed to be, dIrectly or indIrectly. on offer Of Ihe sollcltollon of on offer fa buy Of sell ony secuflty referred to Of mentioned The motler IS presented merely for the convcr,ence of the subscriber While -Ne believe the sources of our Informaon to be reliable, we In no …..oy represent or guarantee the atcurocy thereof nor of the statements mude herein Any action to be token by the subscriber should be based on hiS own Investigation and mformatlon Janney Montgomery ScOIl, Inc, as a corporollon, Clnd Its offlters or employees. may now have, or may laler lake, poSitions or tradcs In rcspect to any securities mentioned In thiS or any future Issue, and such position may be different from any views now or hereafter exprcssed In thiS or any other Issue Janney Montgomery Scott, 1m , which IS registered with the SEC as on Invf!stmenl adVisor, may give adVice to Its Investment adViSOry and other cvslomers Independently of any statements mode In thiS or In any other Issue Fur1hcr Information on any SCWflty mentioned herem IS available on request 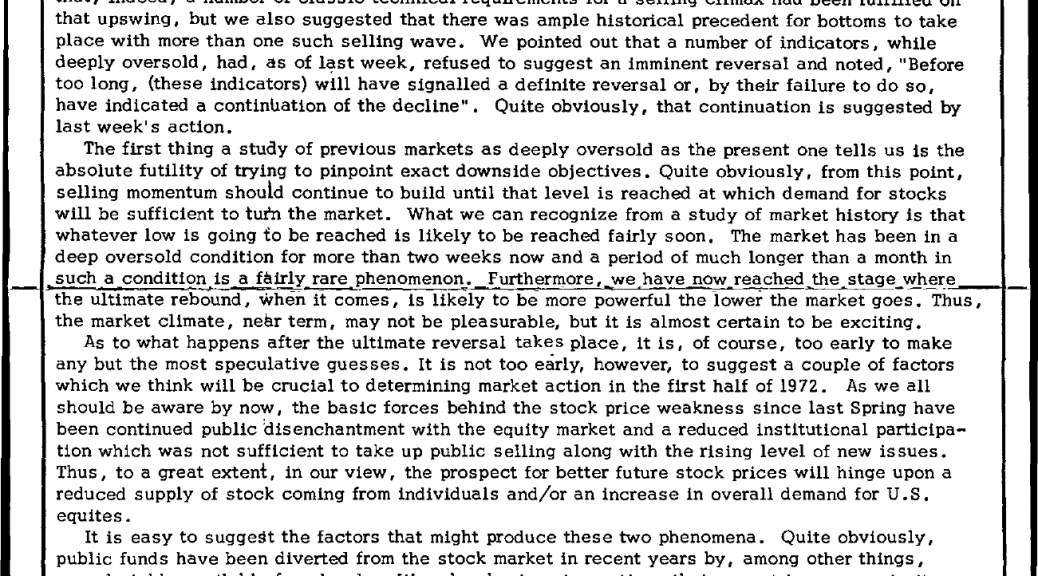 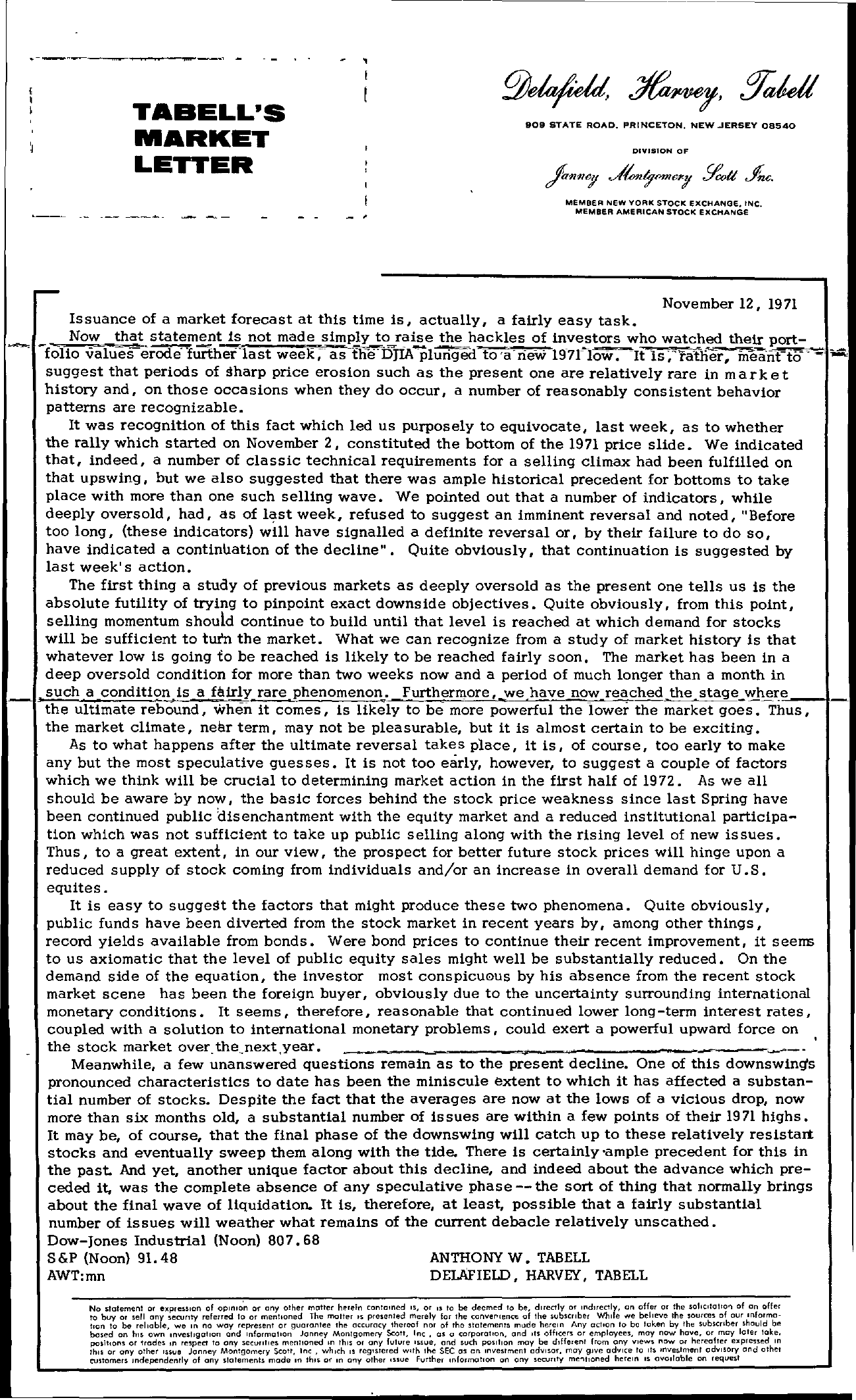 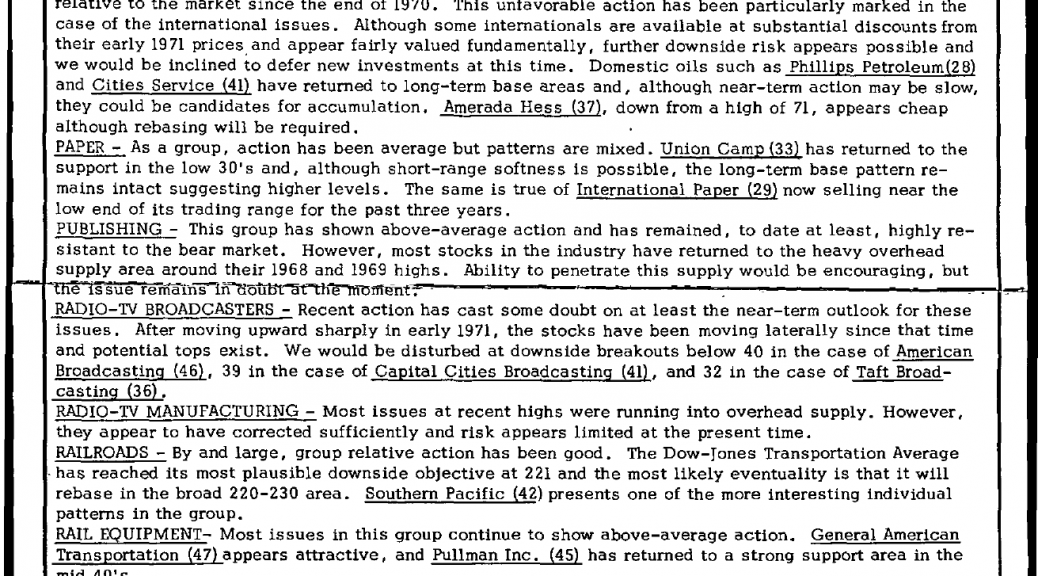 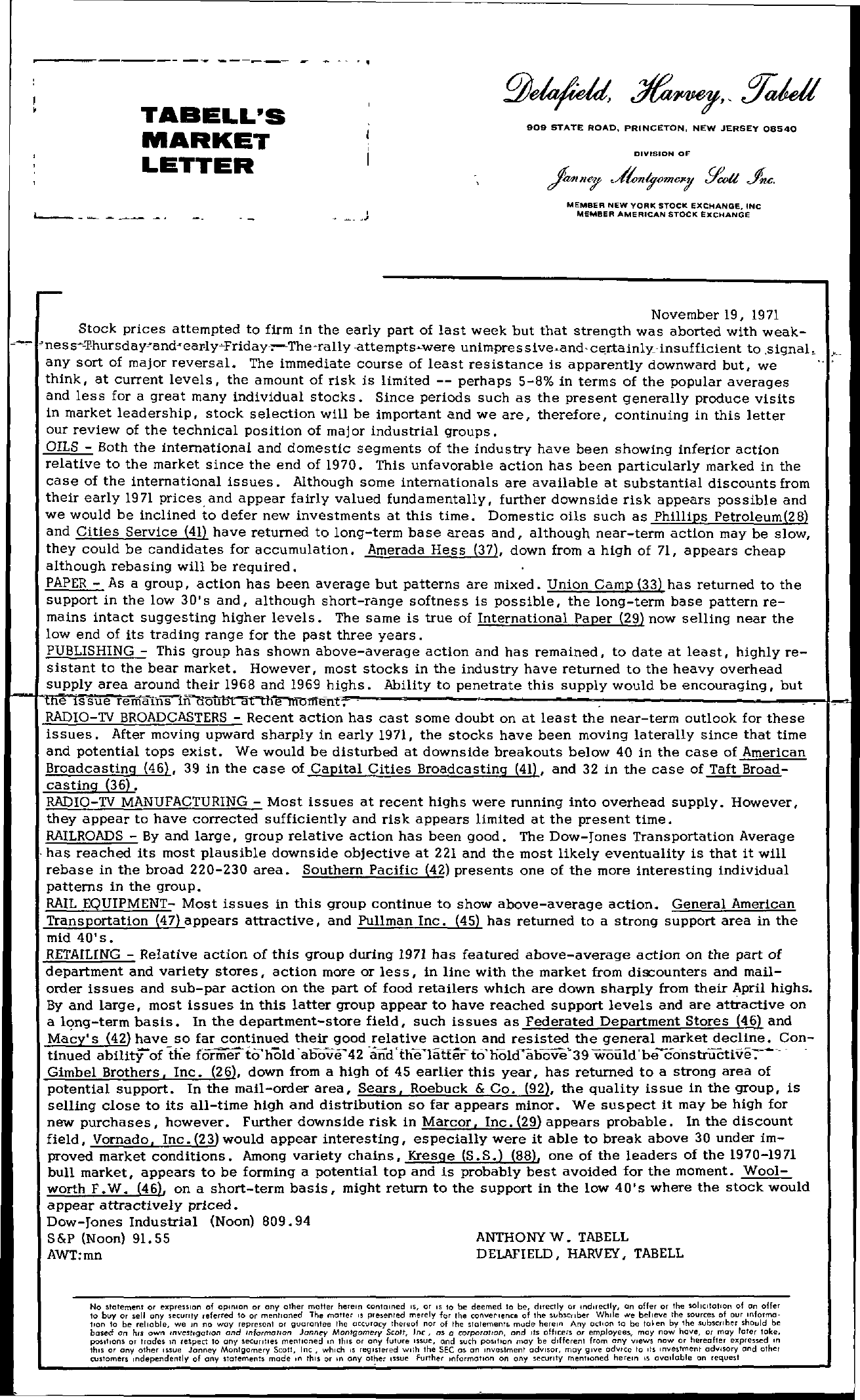 – – ,–….- —– . . , ,I , TABELL'S , MARKET LETTER I , I , 1-.-.- . ………-.-. -, -' – ,, .J l) ,Y'&'J'Ily,. !TakII 909 STATE ROAD, PRINCETON, NEW JERSEY 08540 DIVISION OF , fo,ney o./l'imeI'Y Y/.,a Y1!C. MEMBER NEW YORK STOCK EXCHANGE, INC MEMBER AMERICAN STOCK EXCHANGE November 19, 1971 Stock prices attempted to firm in the early part of last week but that strength was aborted with weak- – e nes s-T'hursdayand'ear-IyFriday'–The -rally ,attemptswere unimpres sive.and certainly' insufficient to ,signal, any sort of major reversal. The immediate course of least resistance is apparently downward but, we think, at current levels, the amount of risk is limited — perhaps 5-8 in terms of the popular averages and less for a great many individual stocks. Since periods such as the present generally produce visits in market leadership, stock selection will be important and we are, therefore, continuing in this letter our review of the technical position of maj or industrial groups. OILS – Both the international and domestic segments of the industry have been showing inferior action relative to the market since the end of 1970. This unfavorable action has been particularly marked in the case of the international issues. Although SOme internationals are available at substantial discounts from their early 1971 prices. and appear fairly valued fundamentally, further downside risk appears possible and we would be inclined to defer new investments at this time. Domestic oils such as Phillips Petroleum(28) and Cities Service (41) have returned to long-term base areas and, although near-term action may be slow, they could be candidates for accumulation. Amerada Hess (37), down from a high of 71, appears cheap although rebasing will be required. PAPER – As a group, action has been average but patterns are mixed. Union Camp (33) has returned to the support in the low 30's and, although short-range softness is possible, the long-term base pattern re- mains intact suggesting higher levels. The same is true of International Paper (29) now selling near the low end of its trading range for the past three years. PUBLISHING This group has shown above-average action and has remained, to date at least, highly re- sistant to the bear market. However, most stocks in the industry have returned to the heavy overhead supply area around their 1968 and 1969 highs. Ability to penetrate this supply would be encouraging, but the issue remains' lnaOtrllt-anhmnorrrent. RADIO-TV BROADCASTERS – Recent action has cast some doubt on at least the near-term outlook for these issues. After moving upward sharply in early 1971, the stocks have been moving laterally since that time and potential tops exist. We would be disturbed at downside breakouts below 40 in the case of American Broadcasting (46), 39 in the case of Capital Cities Broadcasting (41), and 32 in the case of Taft Broad- casting (36). RADIO-TV MANUFACTURING – Most issues at recent highs were running into overhead supply. However, they appear to have corrected sufficiently and risk appears limited at the present time. RAILROADS – By and large, group relative action has been good. The Dow-Jones Transportation Average ,has reached its most plausible downside objective at 221 and the most likely eventuality is that it will rebase in the broad 220-230 area. Southern Pacific (42) presents one of the more interesting indiVidual patterns in the group. RAIL EQUIPMENT- Most issues in this group continue to show above-average action. General American Transportation (47) appears attractive, and Pullman Inc. (45) has returned to a strong support area in the mid 40's. RETAILING – Relative action of this group during 1971 has featured above-average action on the part of department and variety stores, action more or less, in line with the market from disounters and mail- order issues and sub-par action on the part of food retailers which are down sharply from their April highs. By and large, most issues in this latter group appear to have reached support levels and are attractive on a long-term basis. In the department-store field, such issues as Federated Department Stores (46) and May' s (42) have so far continued their good relative action and resisted the general market decline. Continued abilityof the foriner io hold 'aDoe4 2 'and'the'latier- to' nold'above 39 would' be-constructive–' ' , Gimbel Brothers, Inc. (26), down from a high of 45 earlier this year, has returned to a strong area of potential support. In the mail-order area, Sears, Roebuck&Co. (92),thequalityissueinthegroup, is selling close to its all-time high and distribution so far appears minor. We suspect it may be high for new purchases, however. Further downside risk in Marcor, Inc. (29) appears probable. In the discount field, Vornado, Inc. (23) would appear interesting, especially were it able to break above 30 under im- proved market conditions. Among variety chains, Kresge (S.S.) (88), one of the leaders of the 1970-1971 bull market, appears to be forming a potential top and is probably best avoided for the moment. Wool- worth F. w. (46), on a short-term basis, might return to the support in the low 40's where the stock would appear attractively priced. Dow-Jones Industrial (Noon) 809.94 S&P (Noon) 91. 55 ANTHONY W. TABELL AWTmn DELAFIELD, HARVEY. TABELL NQ statement or elpreS510n of opInion or any other mOiler herein ContOined 1, or IS 10 be deemed 10 be, d,reClly or ,dlreClly, an offer or the soliCitation of on offer to buy or sell any security referred to or mentioned The moiler 1 presented merely for the converlencE of the subSCriber Whde we believe the sources of our information to be reliable, we In no way represent or guarantee the accuracy thereof nor of the stotemenlS mude herein Any ocllon to be loen by the subSCriber should be based on hiS own m ….est'gollon and information Janney Montgomefy Scolt, Inc, 0 0 corporal,on, and lIS offIcers or employees, may now have, or may laler Toke, poSitions or trades In re1pect To any securities mentioned In thiS or any future Issue, and suen poslhon may be different from any views now or hereofter expressed In thiS or any other Issue Janney Montgomery Scali, Inc, whICh IS registered With the SEC as on Investment adVisor, may give adVICe to Its Investment adVISOry and other customers mdependently of any Slolements mode ,n thiS or In any oler Issue Further information on any security mentioned he-rem IS available on request 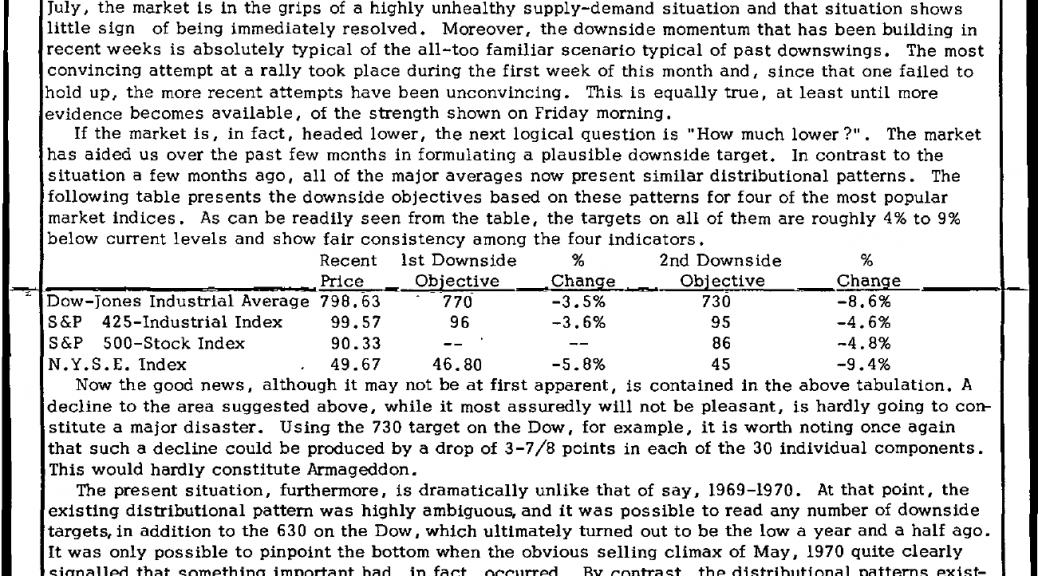 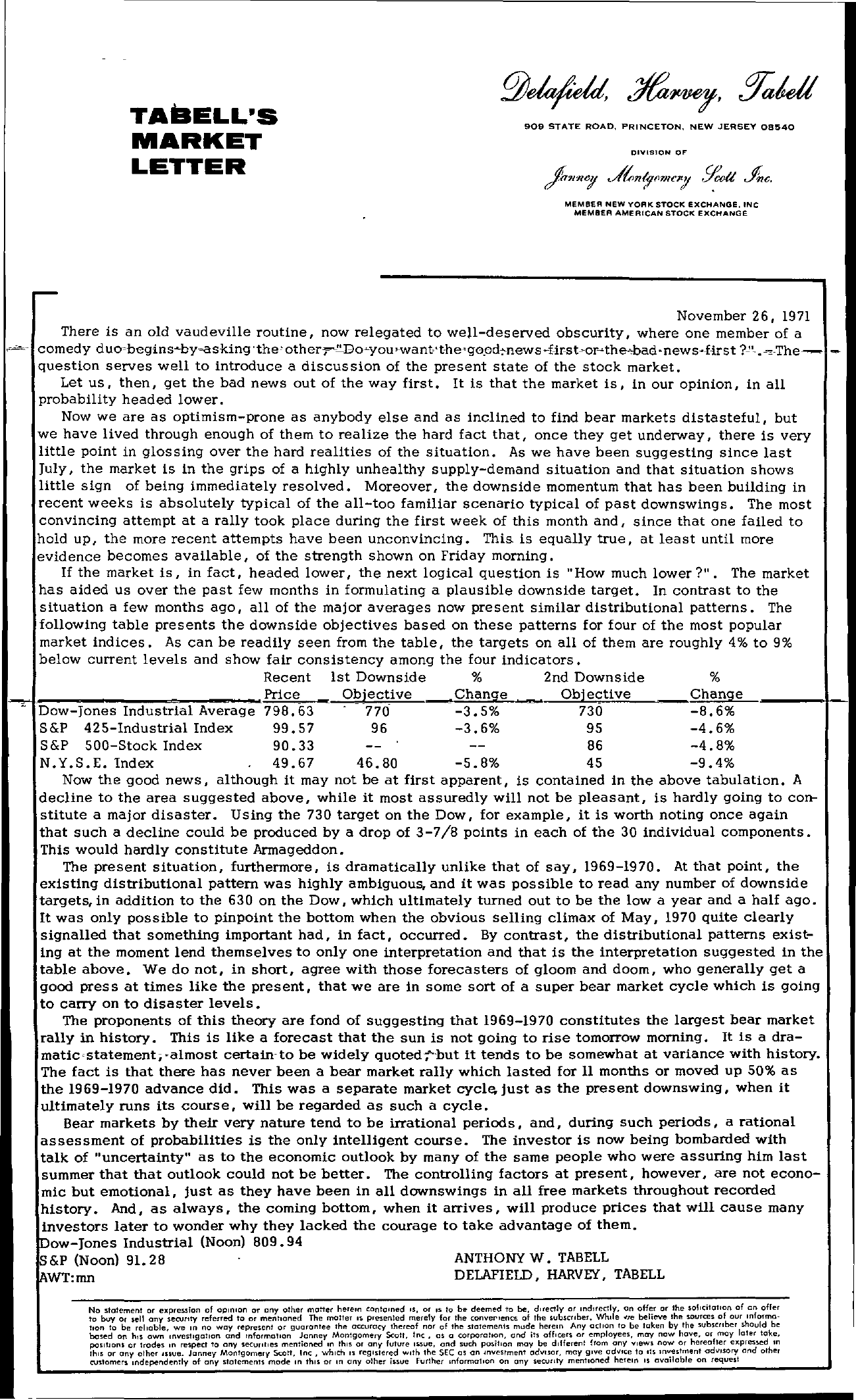