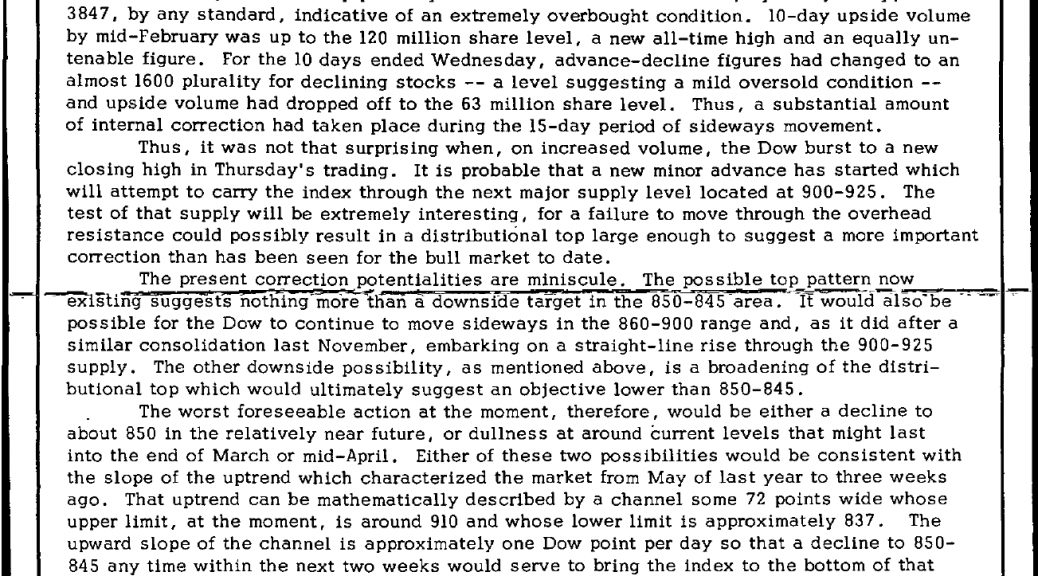 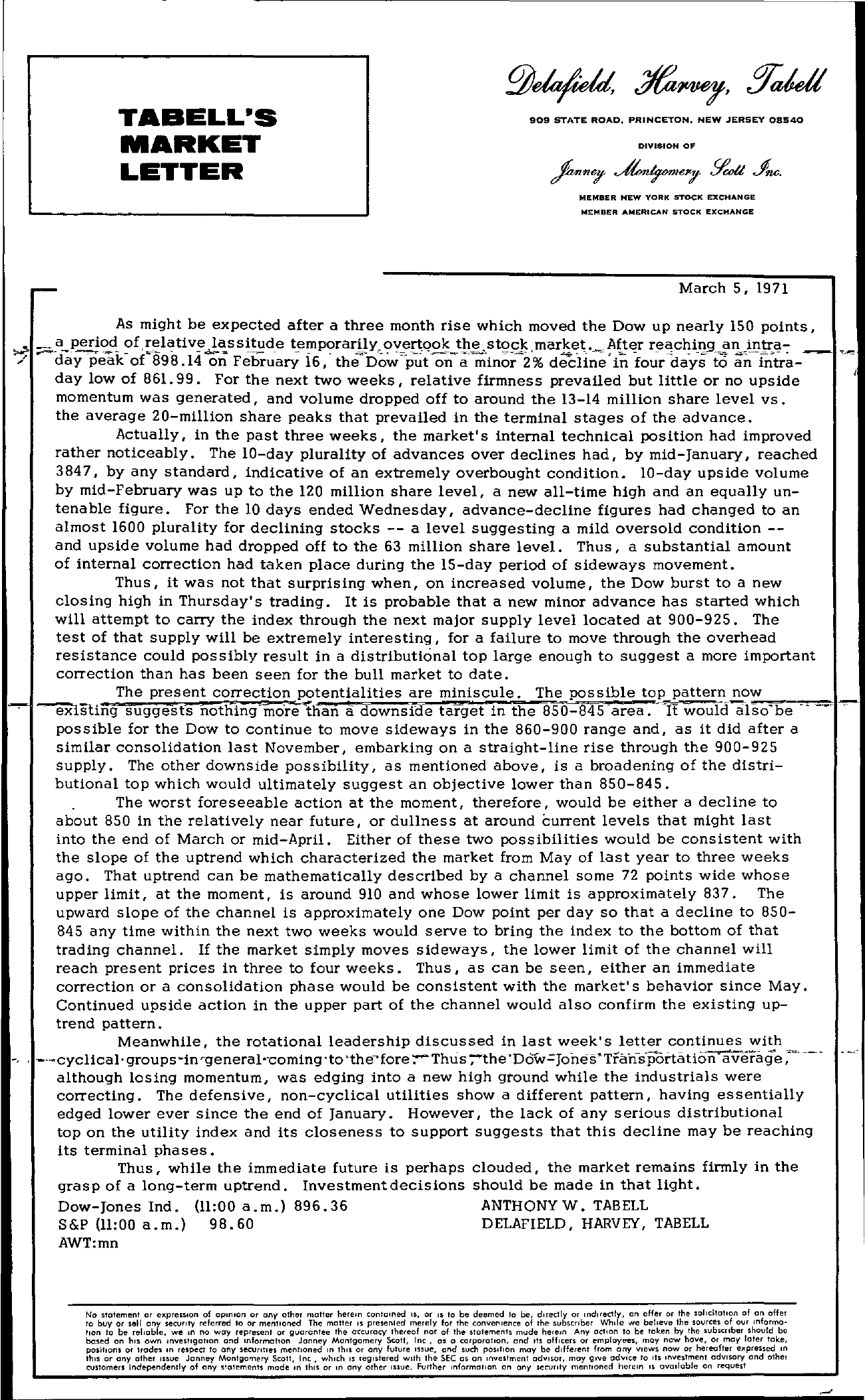 TABELLS MARKET LETTER 909 STATE ROAD, PRINCETON. NEW JERSEY 08540 DIVISION OF MEMBER NEW YORK STOCK EXCHANGE MEMBER AMERICAN STOCK EXCHANGE March 5, 1971 As might be expected after a three month rise which moved the Dow up nearly 150 points, . a period of relative lassitude temporarily overtook the stock market. After reaching an intra- .—- ……– …,…- '''. – – . -;- -o… – …,…, — -., – — . . . – ,;' .;;'–..-. '0-.' / day peak of 898.14 on February 16, the Dow put on a minor 2 decline in four days to an intra- day low of 861.99. For the next two weeks, relative firmness prevailed but little or no upside I momentum was generated, and volume dropped off to around the 13-14 million share level vs. the average 20-million share peaks that prevailed in the terminal stages of the advance. Actually, in the past three weeks, the market's internal technical position had improved rather noticeably. The 10-day plurality of advances over declines had, by mid-Tanuary, reached 3847, by any standard, indicative of an extremely overbought condition. 10-day upside volume by mid-February was up to the 120 million share level, a newall-time high and an equally un- tenable figure. For the 10 days ended Wednesday, advance-decline figures had changed to an almost 1600 plurality for declining stocks — a level suggesting a mild oversold condition — and upside volume had dropped off to the 63 million share level. Thus, a substantial amount of internal correction had taken place during the IS-day period of sideways movement. Thus, it was not that surprising when, on increased volume, the Dow burst to a new closing high in Thursday's trading. It is probable that a new minor advance has started which will attempt to carry the index through the next major supply level located at 900-925. The test of that supply will be extremely interesting, for a failure to move through the overhead resistance could possibly result in a distributional top large enough to suggest a more important correction than has been seen for the bull market to date. The present correction potentialities are miniscule. The possible top pattern now -existing suggests not111ng-'n6re1han a downsfde target in the 85'0-845 area It ouldal's-o''C'b-e''''''''''I .. possible for the Dow to continue to move sideways in the 860-900 range and, as it did after a similar consolidation last November, embarking on a straight-line rise through the 900-925 supply. The other downside possibility, as mentioned above, is a broadening of the distri- butional top which would ultimately suggest an objective lower than 850-845. The worst foreseeable action at the moment, therefore, would be either a decline to about 850 in the relatively near future, or dullness at around current levels that might last into the end of March or mid-April. Either of these two possibilities would be consistent with the slope of the uptrend which characterized the market from May of last year to three weeks ago. That uptrend can be mathematically described by a channel some 72 points wide whose upper limit, at the moment, is around 910 and whose lower limit is approximately 837. The upward slope of the channel is approximately one Dow pOint per day so that a decline to 850- 845 any time within the next two weeks would serve to bring the index to the bottom of that trading channel. If the market simply moves sideways, the lower limit of the channel will reach present prices in three to four weeks. Thus, as can be seen, either an immediate correction or a consolidation phase would be consistent with the market's behavior since May. Continued upside action in the upper part of the channel would also confirm the existing up- trend pattern. Meanwhile, the rotational leadership discussed in last week's letter continues with -, , –cyclical groups-in cgeneralcoming'to 'thefore -Thus the DowTones'Traifsp6itation'average;- .. although lOSing momentum, was edging into a new high ground while the industrials were correcting. The defensive, non-cyclical utilities show a different pattern, having essentially edged lower ever since the end of Tanuary. However, the lack of any serious distributional top on the utility index and its closeness to support suggests that this decline may be reaching its terminal phases. Thus, while the immediate future is perhaps clouded, the market remains firmly in the grasp of a long-term uptrend. Investmentdecisions should be made in that light. Dow- Tones Ind. (1100 a. m.) 896.36 ANTHONY W. TAB ELL S&P (1100 a.m.) 98.60 DELAFIELD, HARVEY, TABELL AWTmn No stotement or expression of opInion or any other matter herem contained 15, or 1510 be deemed 10 be, dlrcclry or indirectly, on offer or Ihe sollcitallon of on offer to buy or sell any security referred to or mentioned The molter IS presenled merely for the conver-lenCI; of the subscriber While -Ne believe the sources of our IIlformo- lion to be reliable, we In no way represent or guarantee the accuracy thereof nor of the stotements mude herem Any actIOn to be token by the subscriber should be based on hiS own ITlvestlgolion and IIlformalion Janney Montgomery Seoll, Inc, as a corporation, and Its officers or employees, may now have, or may toter toke, positIOns or trades III respect to any ,ecuntles menlloned III thiS or any future Issue, and such position may be different from any views now or hereofter expressed m thiS or any other Issue Janney Montgomery Scott, Inc, which IS registered With the SEC as on Investment odvlsor, moy give adVice to Its IIlvestment adVISOry and othel customers Independently of any stolemenls mode In thiS or III ony other Issue Further Information on any securoty menTioned herein IS aVailable on requesl 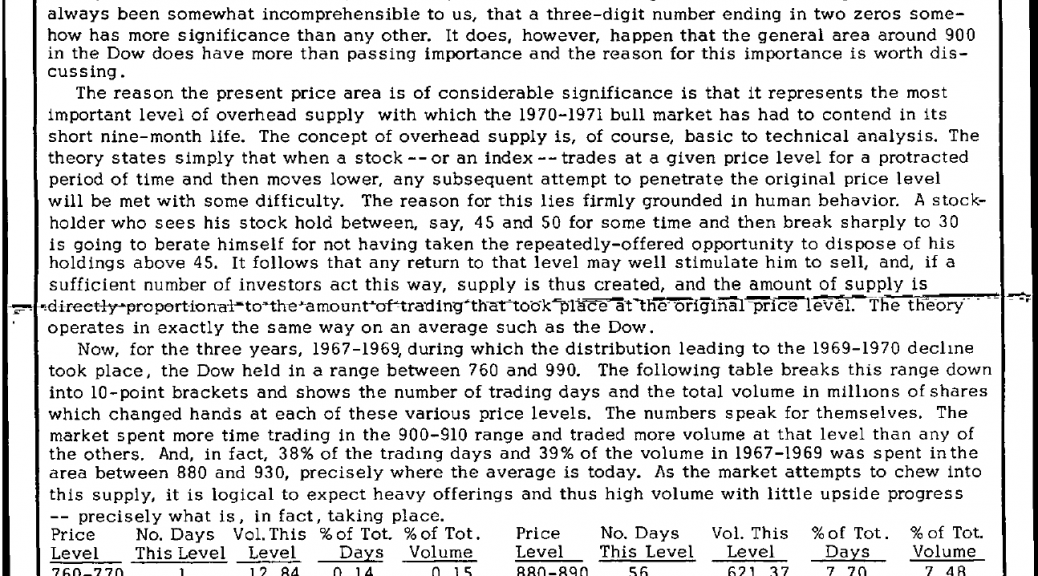 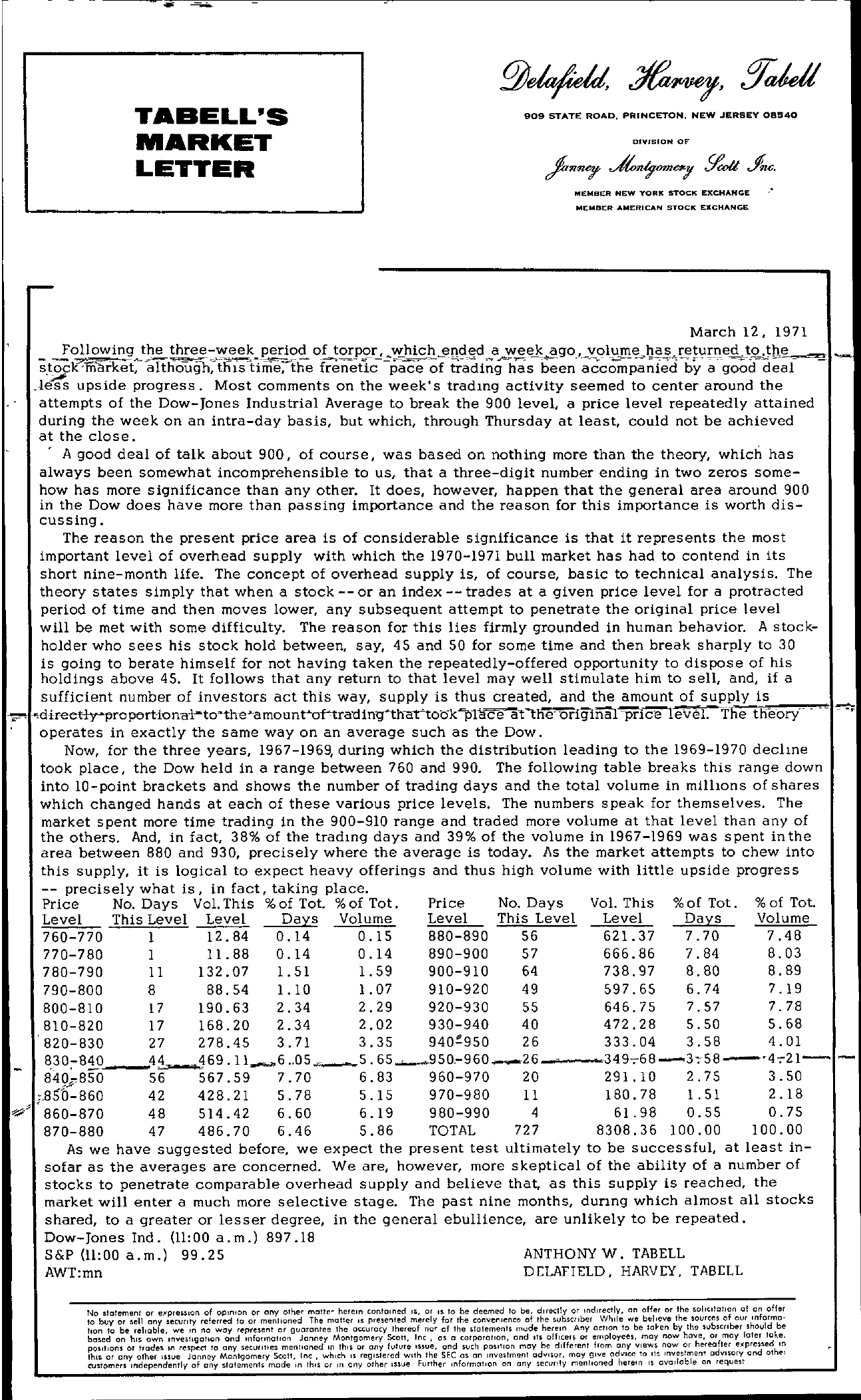 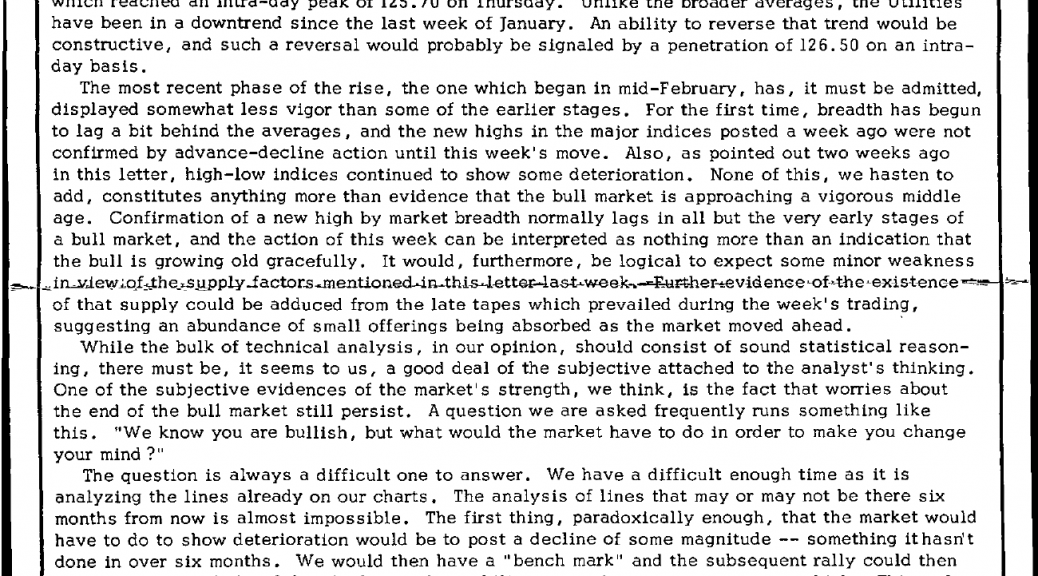 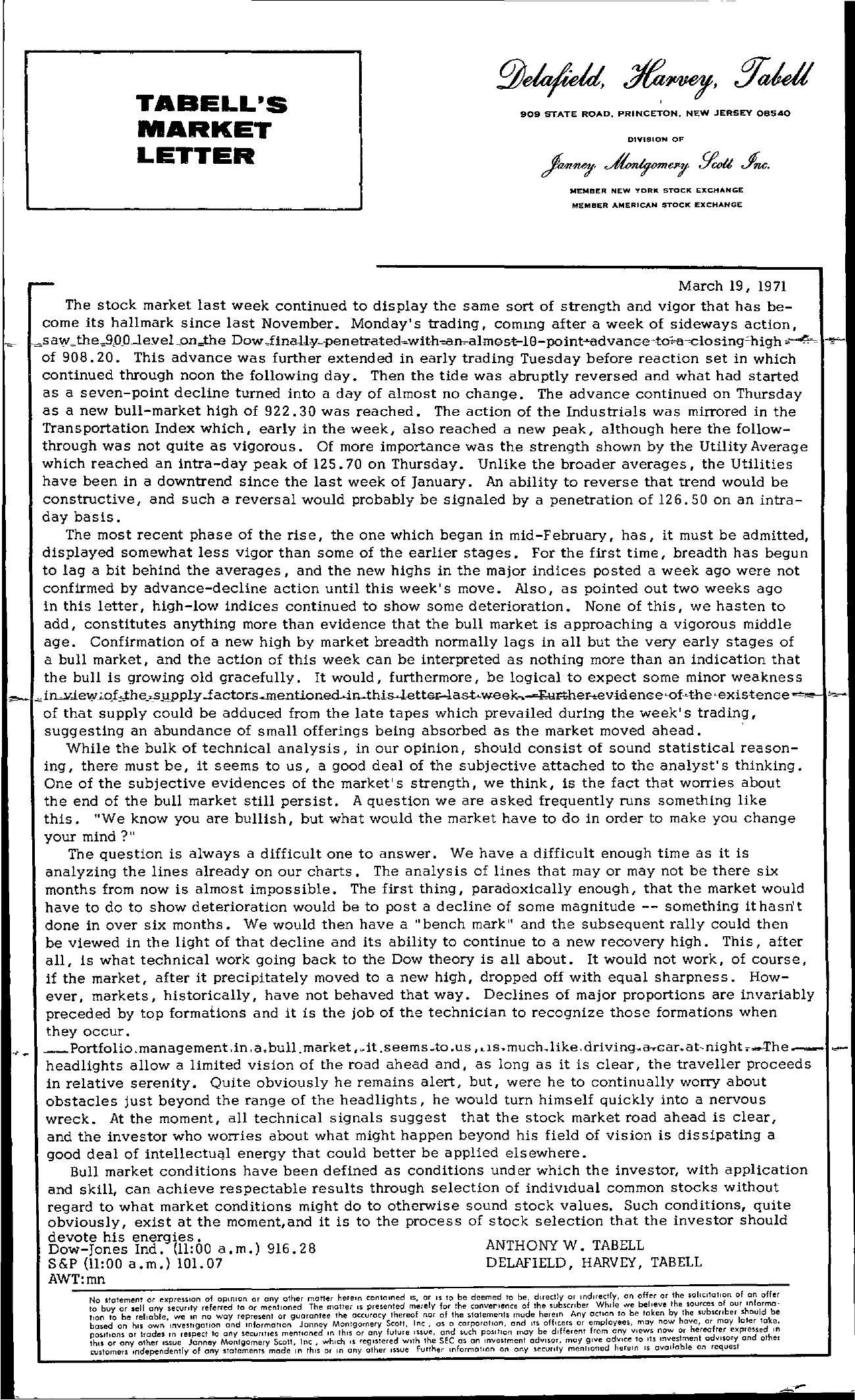 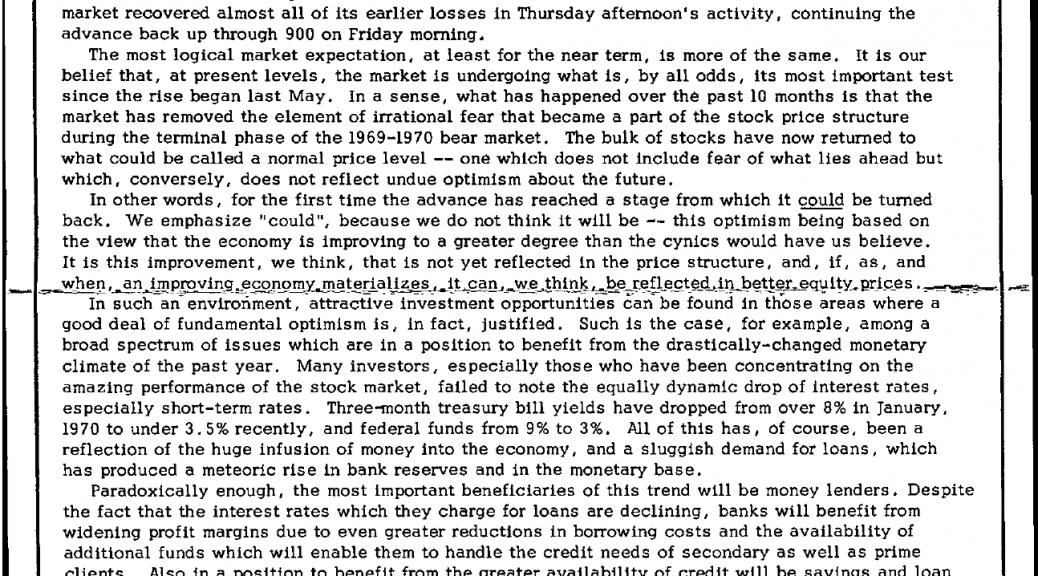 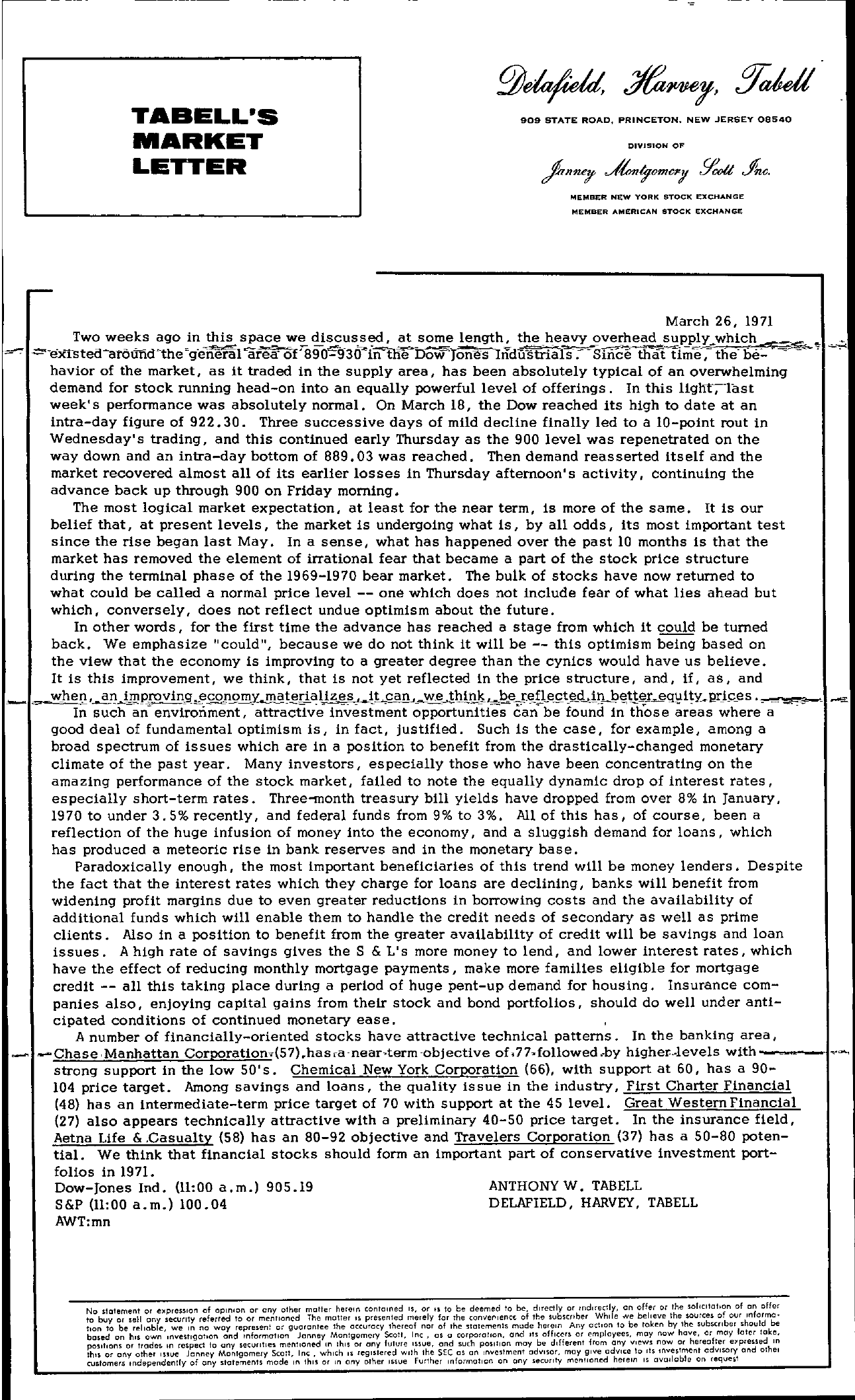 TABELLS MARKET LETTER 909 STATE ROAD, PRINCETON. NEW JERSEY 08540 DIVISION OF MEMBER NEW YORK STOCK EXCHANGE MEMBER AMERICAN STOCK EXCHANGE March 26, 1971 Two weeks ago in this space w scuss, at some length, theheavy oved supplywhich- – . 'exTstea-arotind'the gel area- of'890930intlffiboWJOn'es Indli'rtriai'S.- -SInCe that t!m'e, the- oe' – — havior of the market, as it traded in the supply area, has been absolutely typical of an overwhelming demand for stock running head-on Into an equally powerful level of offerings. In this l1gh—r;–last week's performance was absolutely normal. On March 18, the Dow reached its high to date at an intra-day figure of 922.30. Three successive days of mild decline finally led to a lO-point rout in Wednesday's trading, and this continued early Thursday as the 900 level was repenetrated on the way down and an intra-day bottom of 889.03 was reached. Then demand reasserted Itself and the market recovered almost all of its earlier losses in Thursday afternoon's activity, continuing the advance back up through 900 on Friday morning. The most logical market expectation, at least for the near term, is more of the same, It is our belief that, at present levels, the market is undergoing what is, by all odds, Its most important test since the rise began last May. In a sense, what has happened over the past 10 months is that the market has removed the element of irrational fear that became a part of the stock price structure during the terminal phase of the 1969-1970 bear market. The bulk of stocks have now returned to what could be called a normal price level — one which does not include fear of what lies ahead but which, conversely, does not reflect undue optimism about the future. In other words, for the first time the advance has reached a stage from which It could be turned back. We emphasize could, because we do not think it will be — this optimism being based on the view that the economy is improving to a greater degree than the cynics would have us believe, It is this improvement, we think, that is not yet reflected In the price structure, and, if, as, and whe!1 ,.nimprovin9sn.9my.mat.!'rializes, !t ,can ,weJ.btl!.I,..ReJ-Lect,-i,j)1 btjI..sg\lltY.llrjes . …, In such-an environment, -attractlv-e inestment opportunities Can- be found in those areas where a good deal of fundamental optimism is, in fact, justified. Such is the case, for example, among a broad spectrum of Issues which are In a position to benefit from the drastically-changed monetary climate of the past year. Many investors, especially those who have been concentrating on the amazing performance of the stock market, failed to note the equally dynamic drop of interest rates, especially short-term rates. Three-month treasury bill yields have dropped from over 8 in January, 1970 to under 3.5 recently, and federal funds from 9 to 3. All of this has, of course, been a reflection of the huge infusion of money into the economy, and a sluggish demand for loans, which has produced a meteoric rise in bank reserves and in the monetary base. Paradoxically enough, the most Important beneficiaries of this trend will be money lenders. Despite the fact that the interest rates which they charge for loans are declining, banks will benefit from widening profit margins due to even greater reductions in borrowing costs and the availability of additional funds which will enable them to handle the credit needs of secondary as well as prime clients. Also in a position to benefit from the greater availability of credit will be savings and loan issues. A high rate of savings gives the S & L's more money to lend, and lower interest rates, which have the effect of reducing monthly mortgage payments, make more families eligible for mortgage credit — all this taking place during a period of huge pent-up demand for housing, Insurance com- panies also, enjoying capital gains from their stock and bond portfolios, should do well under anti- cipated conditions of continued monetary ease. A number of financially-oriented stocks have attractive technical patterns. In the banking area, Chase ,Manhattan Corporationv(57) .has ,a -nearterm -objective of.77.followed .-by higherlevels with —-I strong support in the low 50's. Chemical New York CorpOration (66), with support at 60, has a 90- 104 price target. Among savings and loans, the quality issue in the industry, First Charter Financial (48) has an Intermediate-term price target of 70 with support at the 45 level. Great Western Flnancial (27) also appears technically attractive with a preliminary 40-50 price target. In the insurance field, Aetna Life &.Casualty (58) has an 80-92 objective and Travelers Corporation (37) has a 50-80 poten- tial. We think that financial stocks should form an important part of conservative investment port- folios in 1971. Dow-Jones Ind. (1100 a.m.) 905.19 ANTHONY W. TABELL S&P (1100 a.m.) 100.04 DELAFIELD, HARVEY, TABELL AWTmn No stalement or expression of opinion or any other motter herein contomed IS, or ., to be deemed to be, directly or indirectly, on offer or the sollCltahon of an offer to buy or sell any security referred to or mentloncd The mailer IS presented merely for the conVCllcn. of Ihe subSCriber Whde -Ne believe the sources of our tnformatlon 10 be rellcble, we In no way represent Of guarantee Ihe accuracy thereof nor of the statemenls mlde herein Any odlOn 10 be token by the subscriber should be bosed on hiS own Investlgahon and Information Janney Montgomery Seoll, Inc, as a corporation, and ItS officers or employees, moy now have, or may later toke, poslltons or trades In fesped to any securilles mentioned In Ihl5 or ony future .ssue, and such pOSition may be different from any views now or hereofter eypressed In thu or any other Issue Jonney Montgomery Scoll, tnc , whICh IS reglltered With the SEC as on Inveslment adVisor, may give adVice 10 lIs InvestmCnt adVISOry and othel customers Independ!!nt!y of any statements mode In thiS or In any other Issue Further Information on any security mentioned herein IS available on request