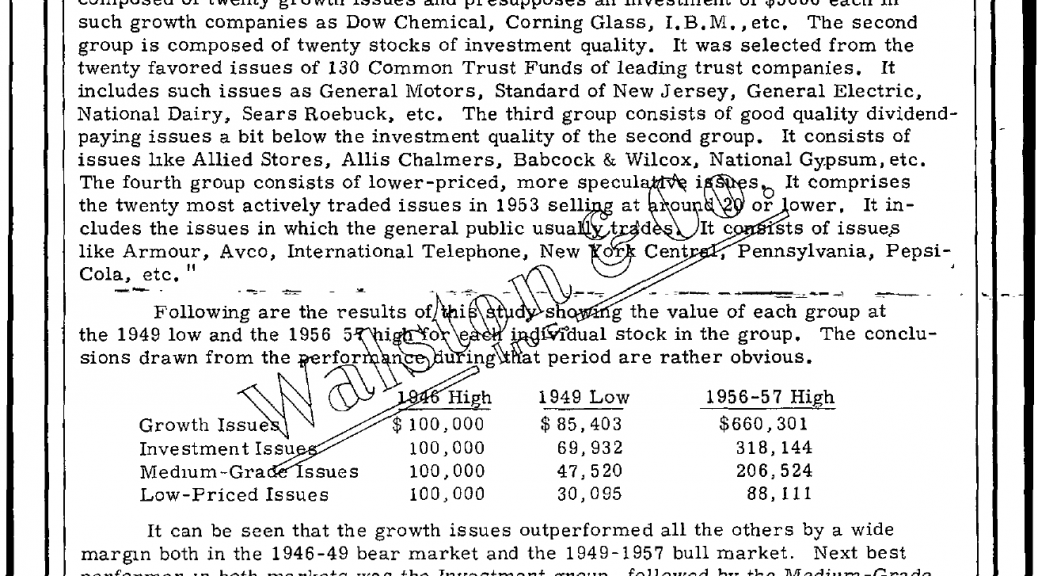 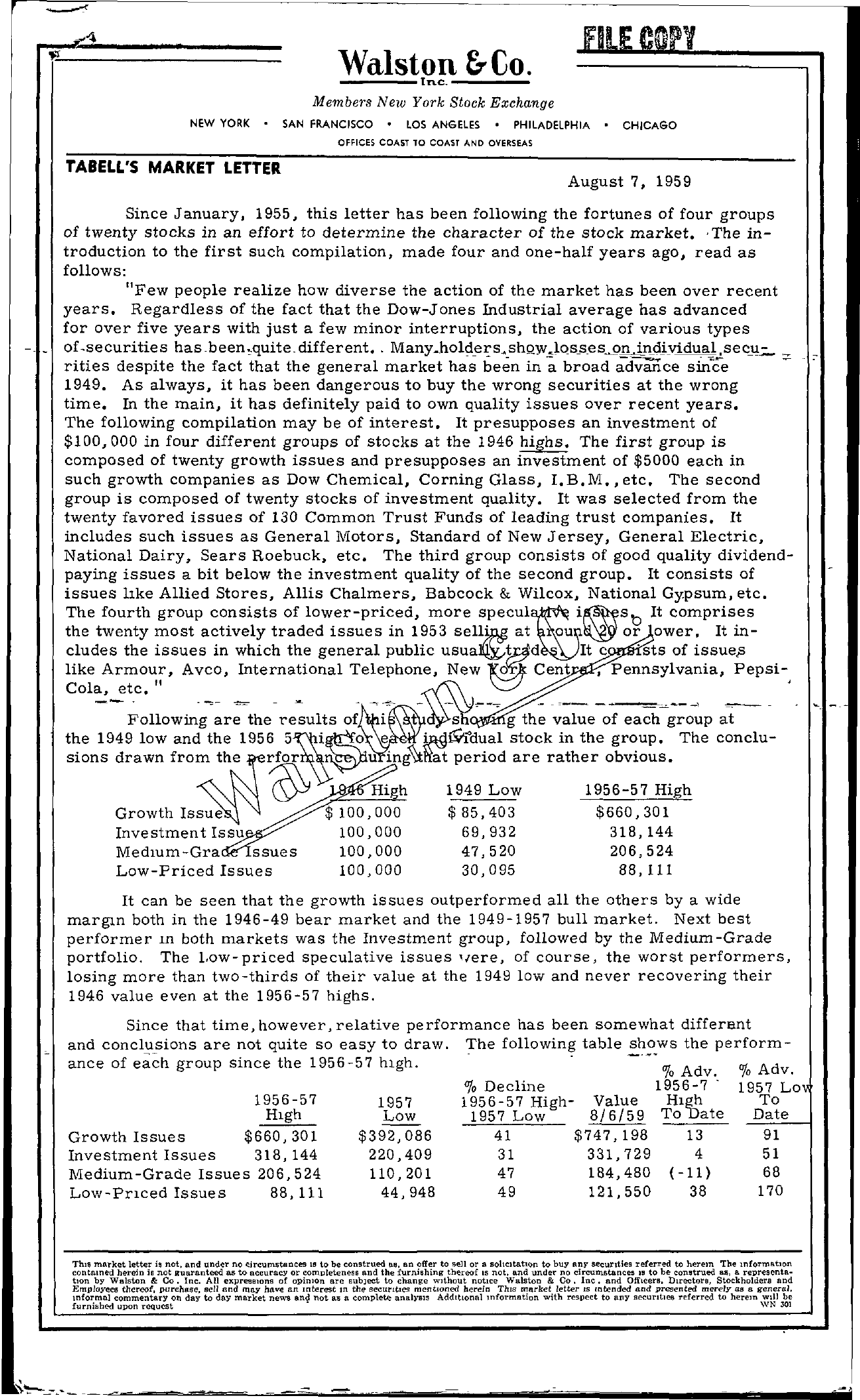 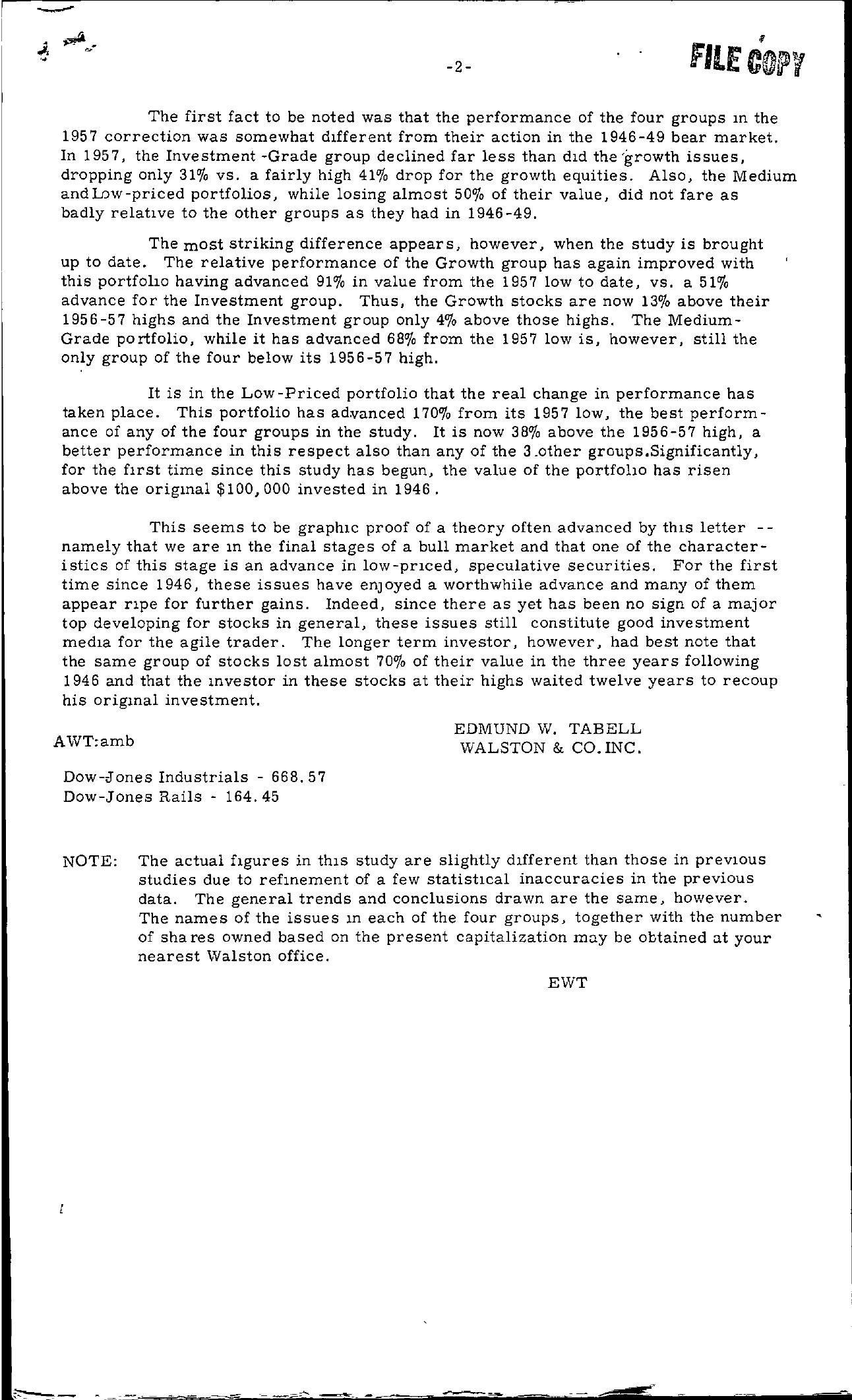 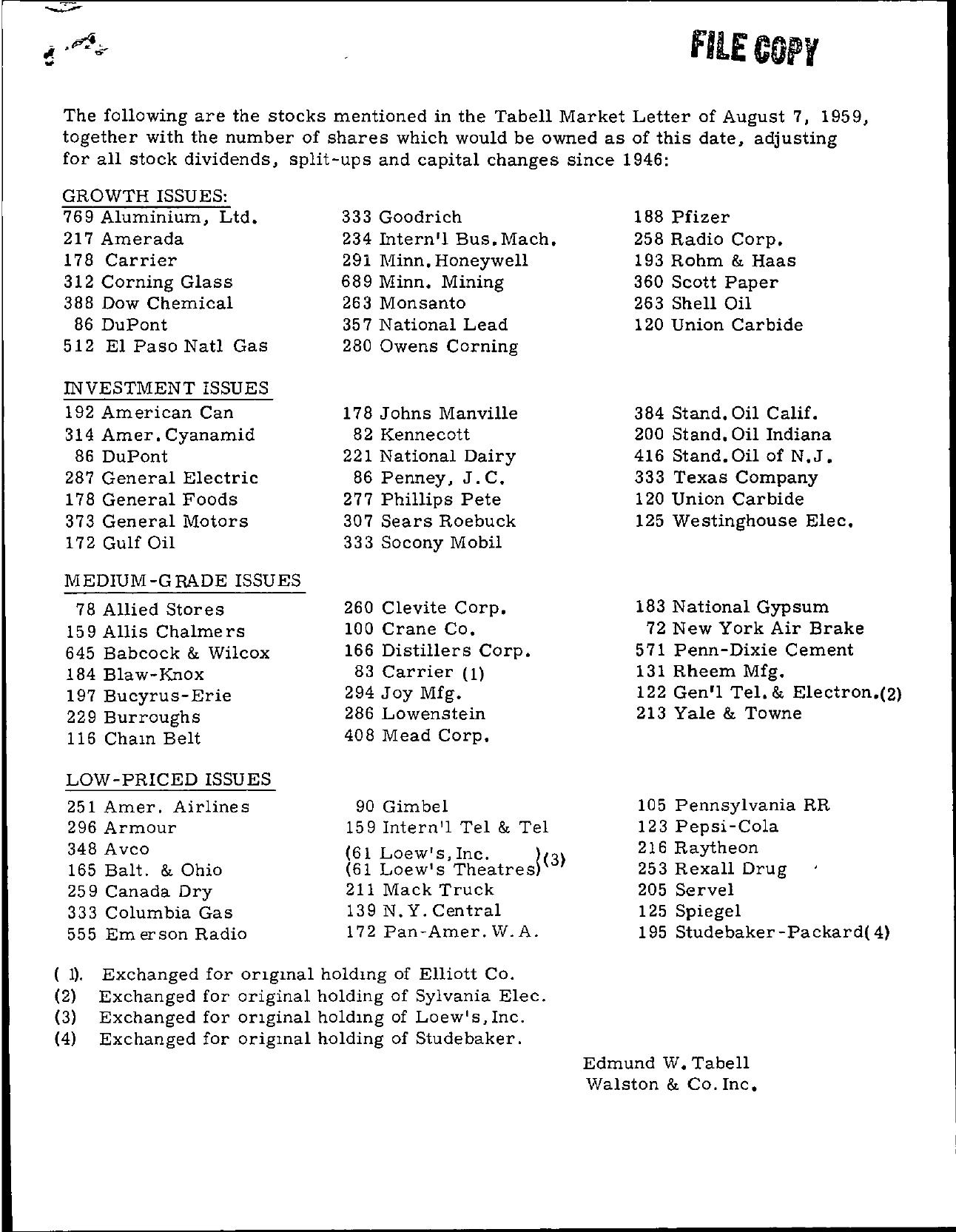 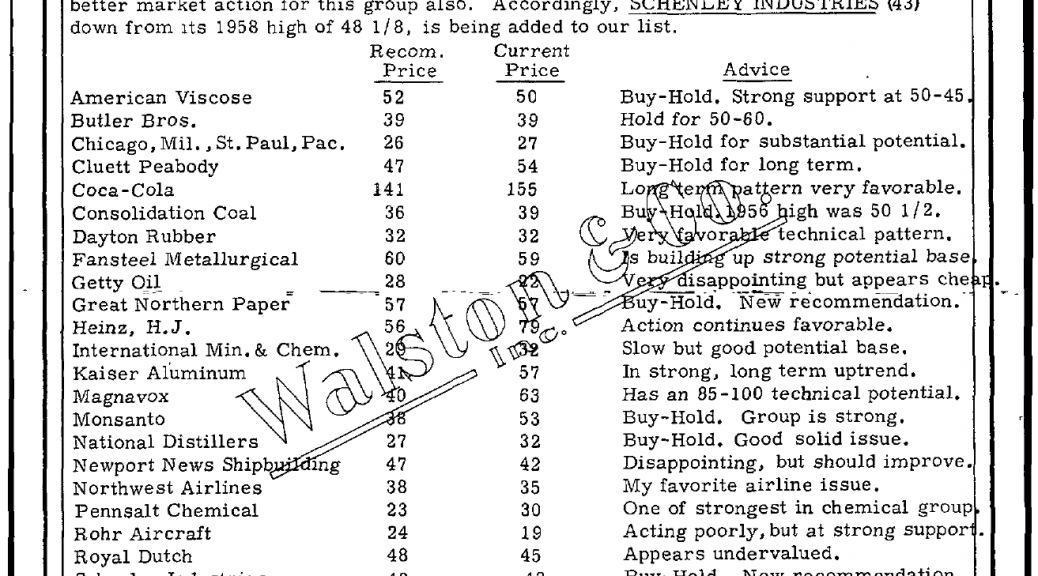 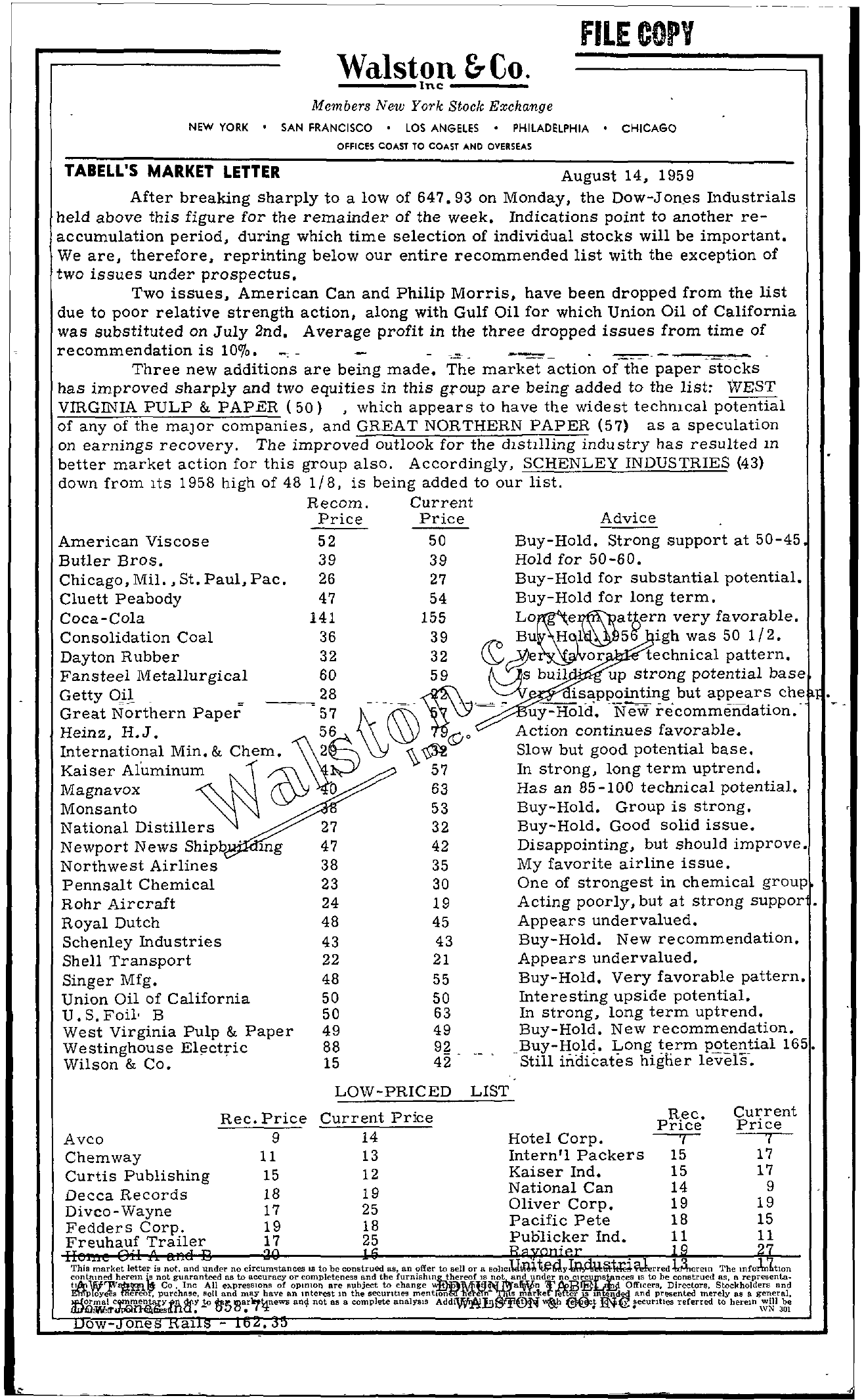 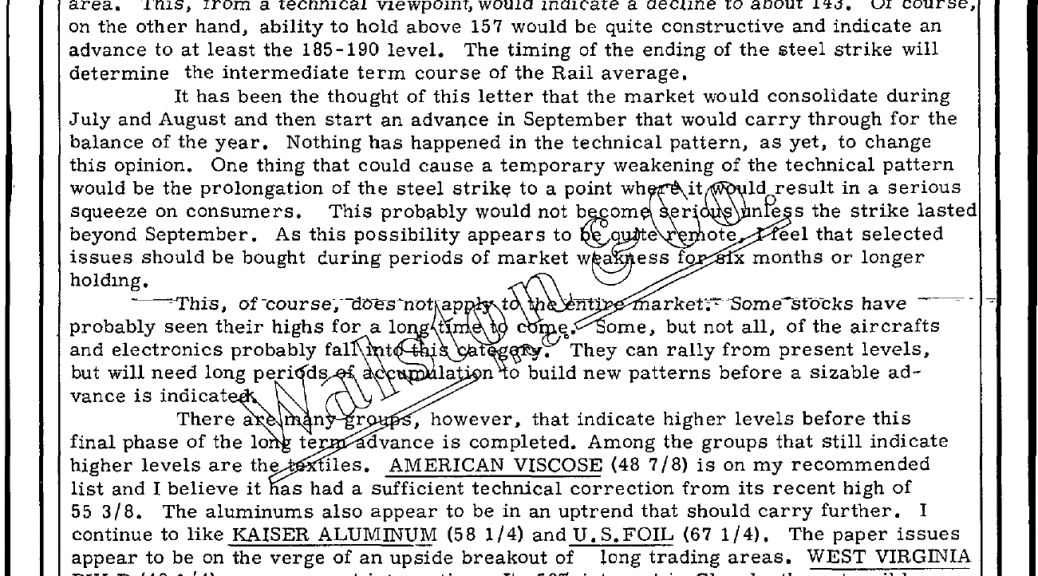 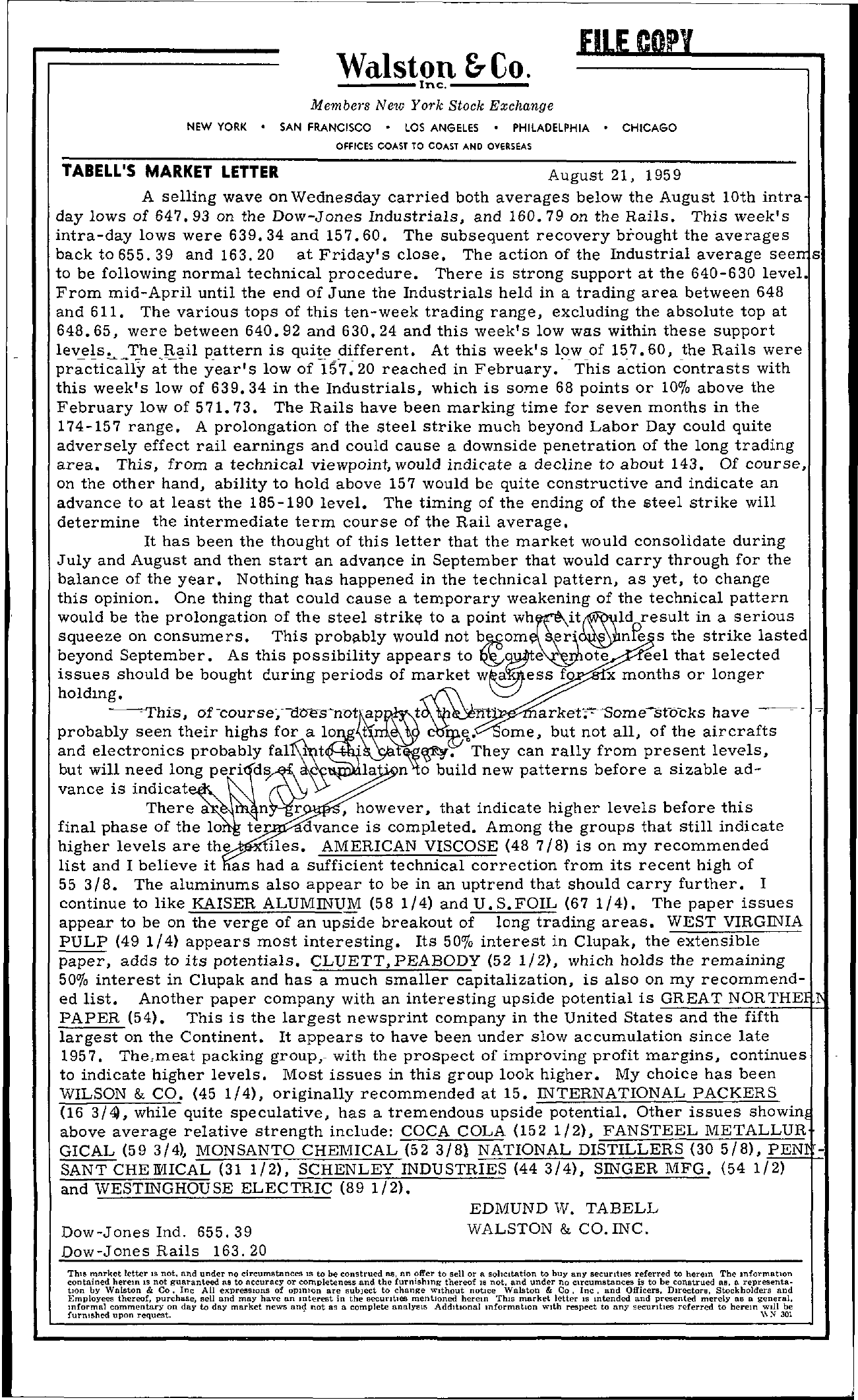 Walston &- Inc. Co. Members New York Stock Exchange NEW YORK SAN FRANCISCO LOS ANGELES PHILADELPHIA CHICAGO OFFICES COAST TO COAST AND OVeRSEAS TABELL'S MARKET LETTER August 21, 1959 A selling wave on Wednesday carried both averages below the August 10th intra day lows of 647.93 on the Dow-Jones Industrials, and 160.79 on the Rails. This week's intra-day lows were 639.34 and 157.60. The subsequent recovery brought the averages back to 655.39 and 163.20 at Friday's close. The action of the Industrial average see s to be following normal technical procedure. There is strong support at the 640-630 level. From mid-April until the end of June the Industrials held in a trading area between 648 and 611. The various tops of this ten-week trading range, excluding the absolute top at 648.65, were between 640.92 and 630.24 and this week's low was within these support levels. The Rail pattern is quite different. At this week's low of 157.60, the Rails were practiZally atthe year's low of -157; 20 reached in February. This action contrasts with this week's low of 639.34 in the Industrials, which is some 68 points or 100/0 above the February low of 571. 73. The Rails have been marking time for seven months in the 174-157 range. A prolongation of the steel strike much beyond Labor Day could quite adversely effect rail earnings and could cause a downside penetration of the long trading area. This, from a technical viewpoint, would indicate a decline to about 143. Of course, on the other hand, ability to hold above 157 would be quite constructive and indicate an advance to at least the 185-190 level. The timing of the ending of the steel strike will determine the intermediate term course of the Rail average. It has been the thought of this letter that the market would consolidate during July and August and then start an advance in September that would carry through for the balance of the year. Nothing has happened in the technical pattern, as yet, to change this opinion. One thing that could cause a temporary weakening of the technical pattern would be the prolongation of the steel strike to a point result in a serious squeeze on consumers. This probably would not s the strike lasted beyond September. As this possibility appears to ote eel that selected issues should be bought during periods of market w a ess fo x months or longer holdmg. – Ift- arket;,, Some-stocks have – -.. probably seen their highs for a orne, but not all, of the aircrafts and electronics probably . They can rally from present levels, but will need long peri la . n to build new patterns before a sizable ad- vance is indicat There a nr , however, that indicate higher levels before this final phase of the 10 ter dvance is completed. Among the groups that still indicate higher levels are the iles. AMERICAN VISCOSE (48 7/8) is on my recommended list and I believe it as had a sufficient technical correction from its recent high of 55 3/8. The aluminums also appear to be in an uptrend that should carry further. I continue to like KAISER ALUMINUM (58 1/4) and U.S.FOIL (67 1/4). The paper issues appear to be on the verge of an upside breakout of long trading areas. WEST VIRGINIA PULP (49 1/4) appears most interesting. Its 500/0 interest in Clupak, the extensible paper, adds to its potentials. CLUETT,PEABODY (521/2), which holds the remaining 500/0 interest in Clupak and has a much smaller capitalization, is also on my recommend- ed list. Another paper company with an interesting upside potential is GREAT NOR THE PAPER (54). This is the largest newsprint company in the United States and the fifth largest on the Continent. It appears to have been under slow accumulation since late 1957. The.meat packing group, with the prospect of improving profit margins, continues to indicate higher levels. Most issues in this group look higher. My choice has been WILSON & CO. (45 1/4), originally recommended at 15. INTERNATIONAL PACKERS (16 3/41, while quite speculative, has a tremendous upside potential. Other issues showin above average relative strength include COCA COLA (152 1/2), FANSTEEL METALLUR GICAL (59 3/4), MONSANTO CHEMICAL (52 3/8 NATIONAL DISTILLERS (30 5/8), PEN SANT CHE1IIlICAL (31 1/2), SCHENLEY INDUSTRIES (44 3/4), SINGER MFG. (54 1/2) and WESTINGHOUSE ELECTRIC (89 1/2). EDMUND W. TABELL Dow-Jones Ind. 655.39 WALSTON & CO. INC. Dow-Jones Rails 163.20 market letter IS not. and under no circumstances IS to be construed as, nn offer to sell or a sohcltation to buy any securities referred to herem The mformntIon contnined herem IS not guaranteed as to nCCUracy or completeness and the furnishmg thereof IS not, and under no Clrcumswnces is to be construed as, n representa- tIon by Walston & Co. Inc All expressIOns of optOlon are subject to ChallR'e WIthout notIce Walston & Co, Inc, nnd Officers, Directors, Stockholders and Employees thereof, purchase, sell and may ha\'e nn mterest in the secuntles mentioned herem ThiS market letter IS mtended and presented merely as a general, mformal commentary on day to day market news and not as a complete analYSIS Additional mformatlon With respect to any secuntIes referred to herem will furnished upon r e q u e s t . ' \\-; 301 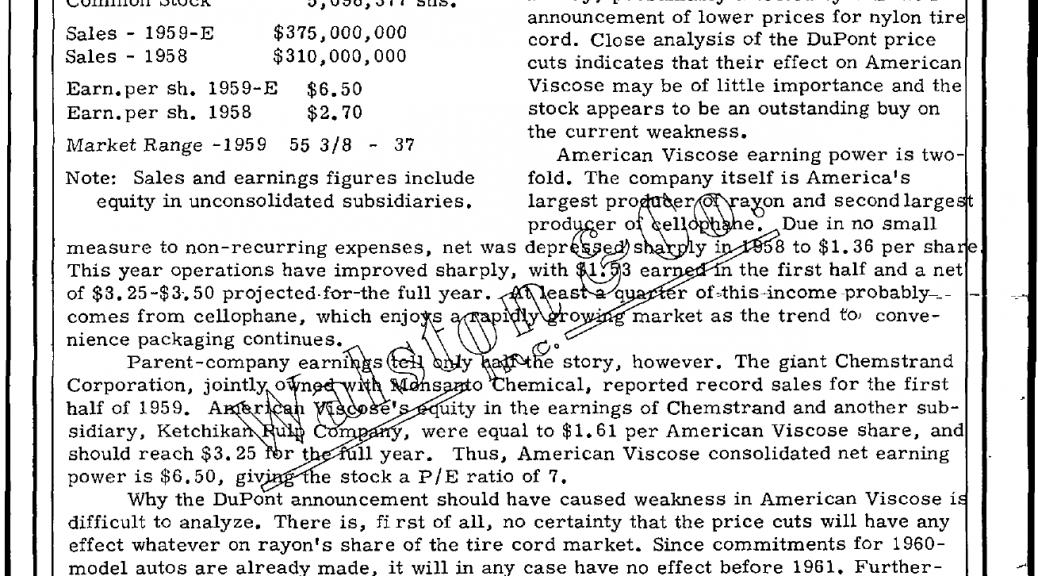 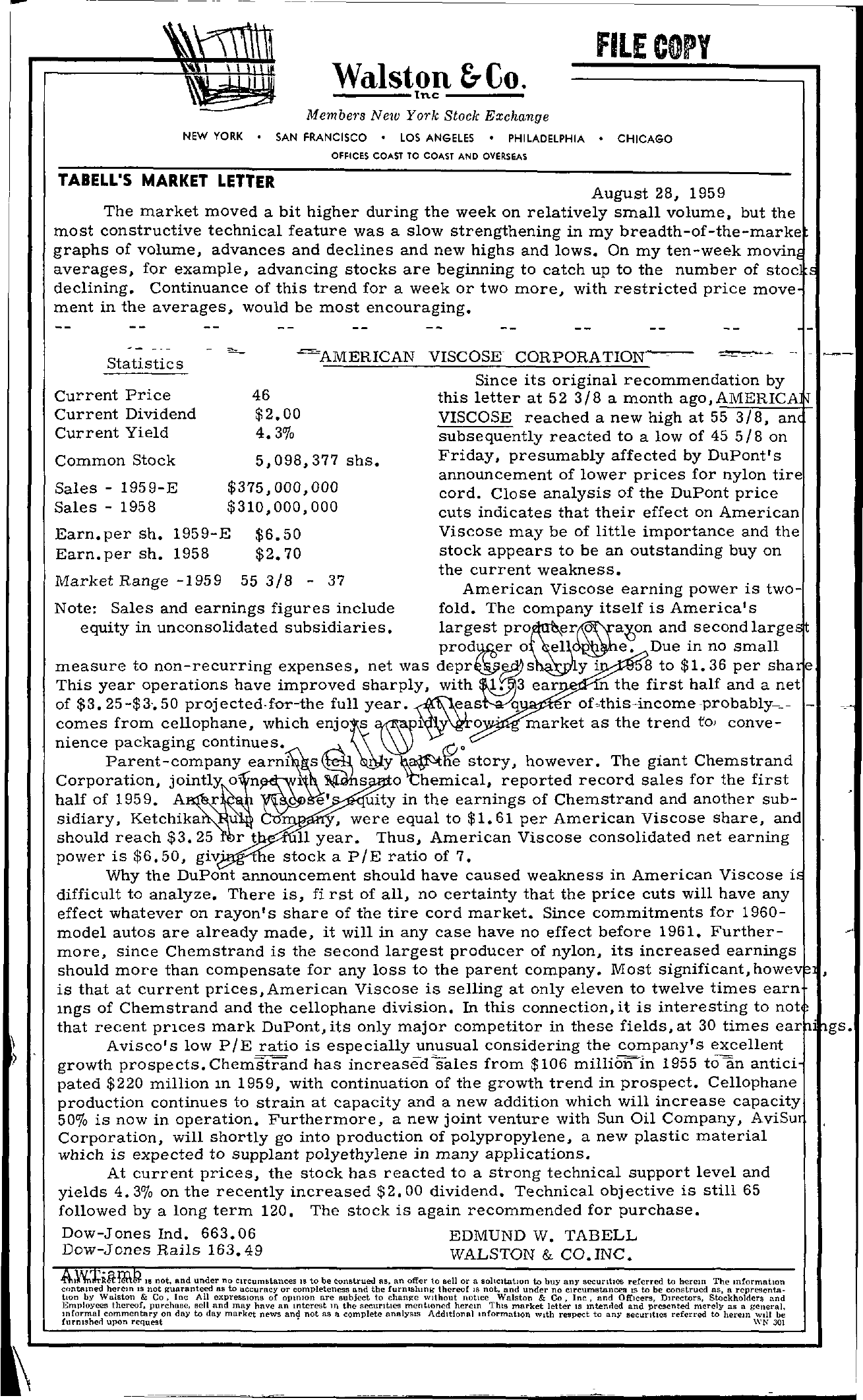 – Walston &Co. Inc fiLE COPY Membe,'s New York Stock Exchange NEW YORK SAN FRANCISCO LOS ANGELES PHILADELPHIA CHICAGO OFFICES COAST TO COAST AND OVERSEAS TABELL'S MARKET LETTER August 28, 1959 The market moved a bit higher during the week on relatively small volume, but the most constructive technical feature was a slow strengthening in my graphs of volume, advances and declines and new highs and lows. On my ten-week mewing averages, for example, advancing stocks are beginning to catch up to the number of st()cltEt declining. Continuance of this trend for a week or two more, with restricted price Hl'..JV''' ment in the averages, would be most encouraging. Statistics Current Price Current Dividend Current Yield '—AMERICAN VISCOSE CORPORATION– 46 2.00 4.3 Since its original recommendation by this letter at 52 3/8 a month ago, VISCOSE reached a new high at 55 3 8, subsequently reacted to a low of 45 5/8 on Common Stock Sales – 1959-E Sales – 1958 5,098,377 shs. 375,000,000 310,000,000 Friday, presumably affected by DuPont's announcement of lower prices for nylon cord. Close analysis of the DuPont price cuts indicates that their effect on American Earn.per sh. 1959-E 6.50 Viscose may be of little importance and the Earn.per sh. 1958 2.70 Market Range -1959 55 3/8 – 37 stock appears to be an outstanding buy on the current weakness. American Viscose earning power is Note Sales and earnings figures include fold. The company itself is America's equity in unconsolidated subsidiaries. largest and secondlarg prodw;,er 0 el Due in no small measure to non-recurring expenses, net was y i 8 to 1.36 per sha This year operations have improved sharply, with ear n the first half and a net of 3.25 -3. 50 projectedfor-the full year. r -probably– comes from cellophane, which market as the trend fo, conve- nience packaging continues. rO' Parent-company s \Y story, however. The giant Chemstrand Corporation, jointly 0 0 hemical, reported record sales for the first half of 1959. A r e ' uity in the earnings of Chernstrand and another sub- sidiary, Ketchika u , were equal to 1. 61 per American Viscose share, should reach 3.25 r t 11 year. Thus, American Viscose consolidated net earning power is 6.50, giv' e stock a pIE ratio of 7. Why the DuPont announcement should have caused weakness in American Viscose difficult to analyze. There is, fi rst of all, no certainty that the price cuts will have any effect whatever on rayon's share of the tire cord market. Since commitments for 1960- model autos are already made, it will in any case have no effect before 1961. Further- more, since Chernstrand is the second largest producer of nylon, its increased earnings should more than compensate for any loss to the parent company. Most significant, is that at current prices,American Viscose is selling at only eleven to twelve times eaTn,t mgs of Chernstrand and the cellophane division. In this connection, it is interesting to that recent prIces mark DuPont, its only major competitor in these fieldS, at 30 times ea.rnlihf's Avisco's low pIE ratio is especially unusual considering the company's excellent growth prospects. Chemstrand has increaseds-ales from 106 million in 1955 to an antici pated 220 million m 1959, with continuation of the growth trend in prospect. Cellophane production continues to strain at capacity and a new addition which will increase capacity 50 is now in operation. Furthermore, a new joint venture with Sun Oil Company, Avi Corporation, will shortly go into production of polypropylene, a new plastic material which is expected to supplant polyethylene in many applications. At current prices, the stock has reacted to a strong technical support level and yields 4.3'70 on the recently increased 2.00 dividend. Technical objective is still 65 followed by a long term 120. The stock is again recommended for purchase. Dow-Jones Ind. 663.06 Dow-Jones Rails 163.49 EDMUND W. TABELL WALSTON & CO. INC. II! not, and under no Circumstances IS to be construed 115, an offer to sell or n sohcltatlon to buy any secUrities referred to herem The mformatlOn cnntnlned herein IS not guarnnteed as to accuracy or completeness and the furnishing thereof IS not, and under no Clrcum!!tancea lS to be construed as, a representa- tIon by Walston & Co, Inc All expreSSIOn!! of oplnlon are subject to chanj'!e WIthout notice Walston & Co, Inc, and Officers, Directors, Stockholders and IIlrormal thereof, purchllse, commentary on day tsoeldl aayndmmarakyethanvewe sana Interest In nd not as a the SecUritlCS mentIoned herem ThiS market letter IS mtenrled complete analysIs Additional mformatlOn With respect to Ilny and presented merely as n general, securities referred to herem wIiI be furnlshed upon r e q u e s t ' \\'N 301