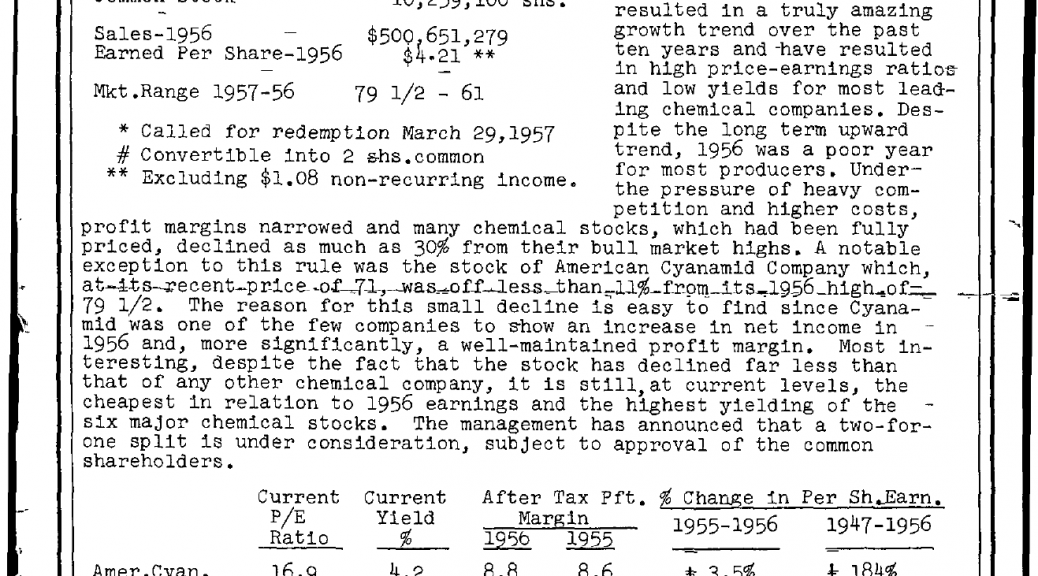 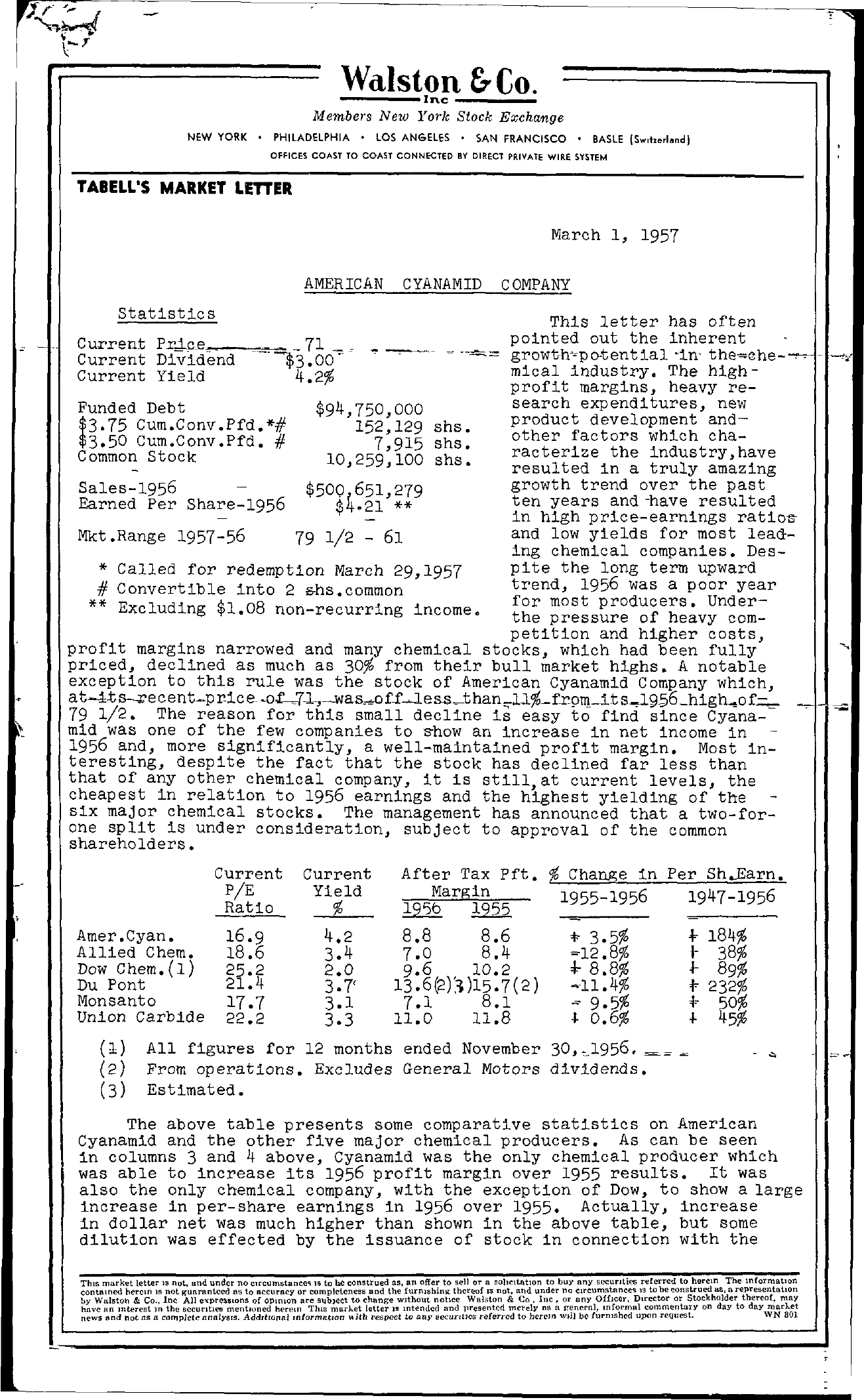 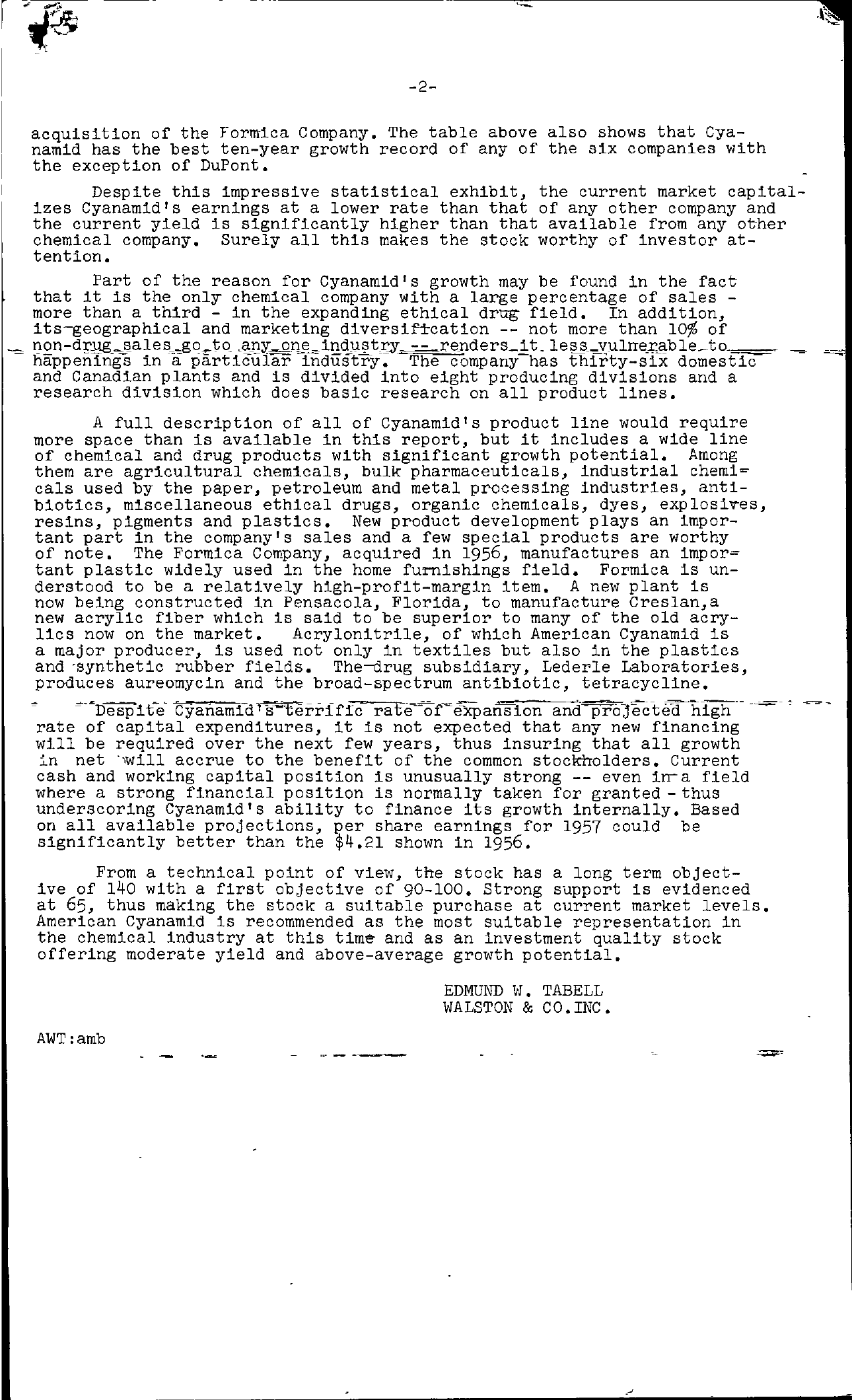 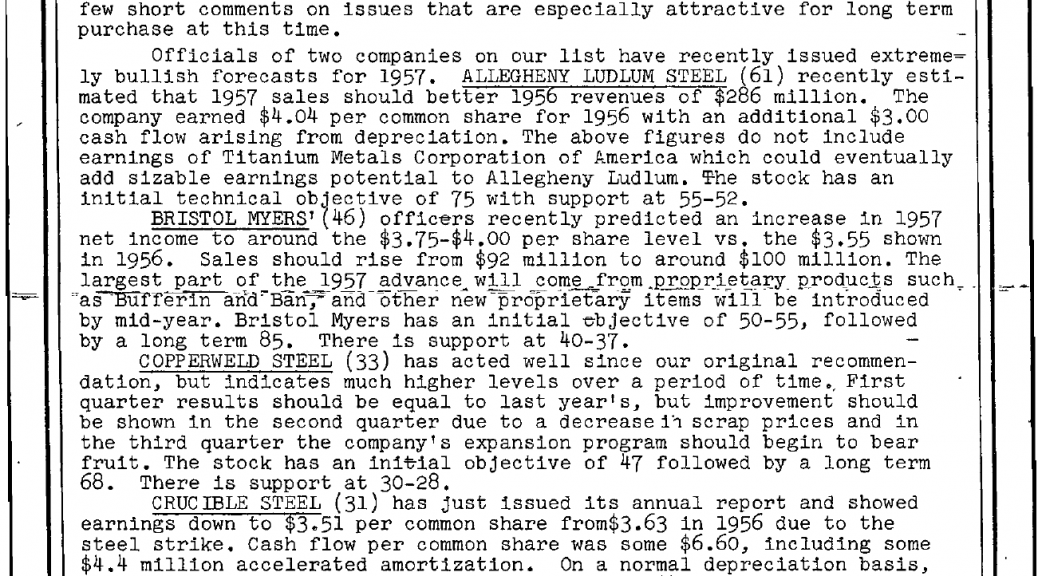 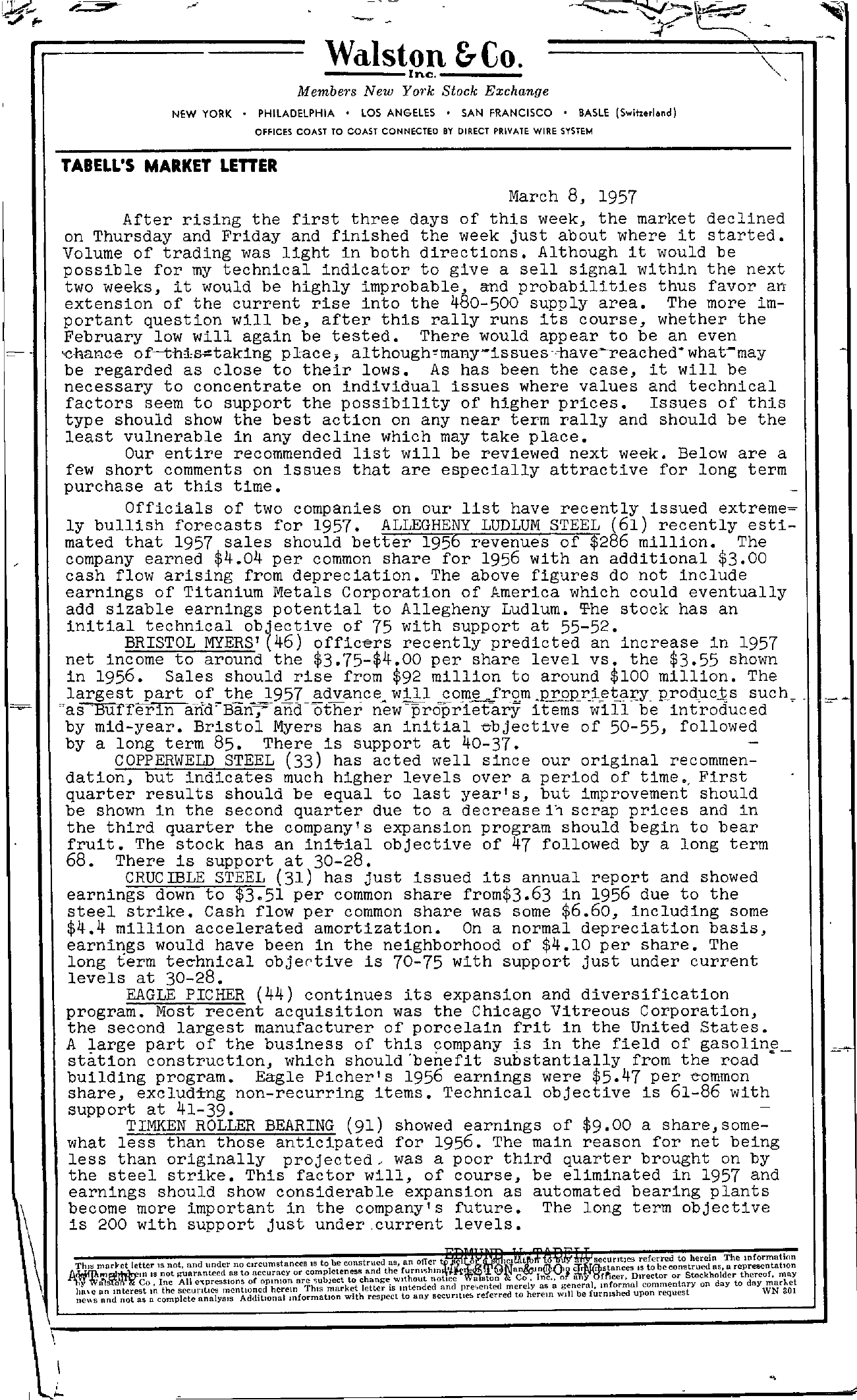 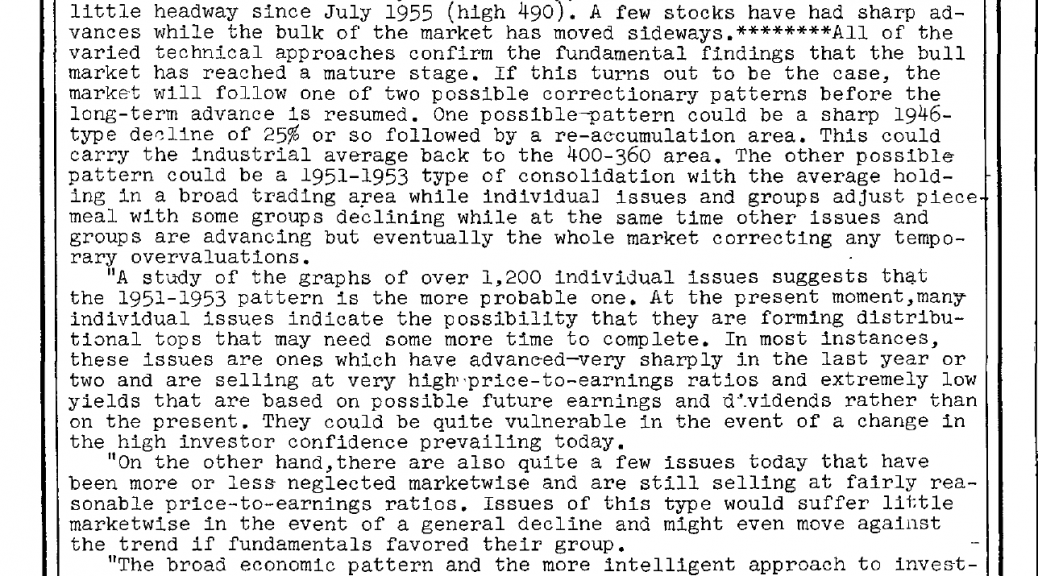 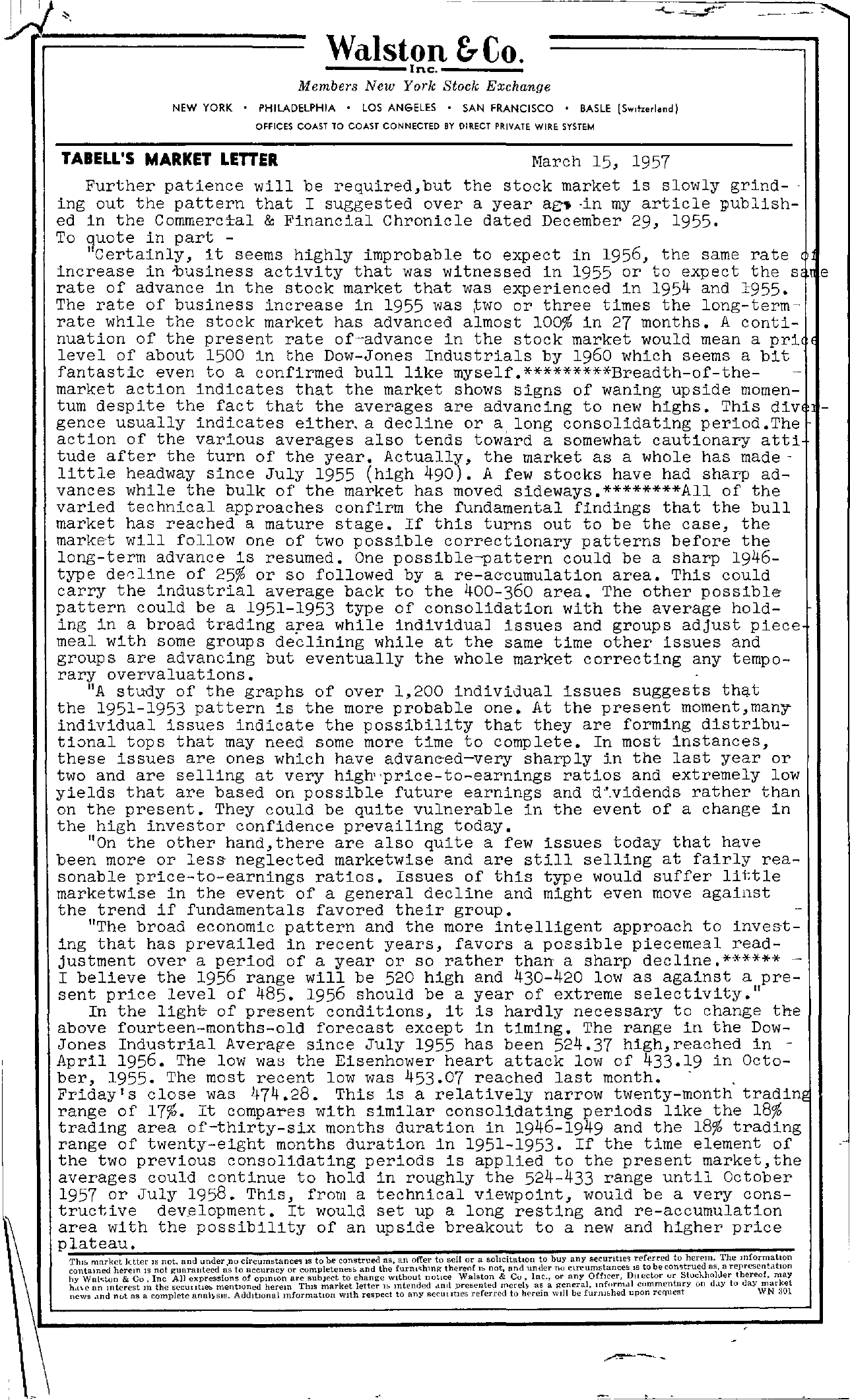 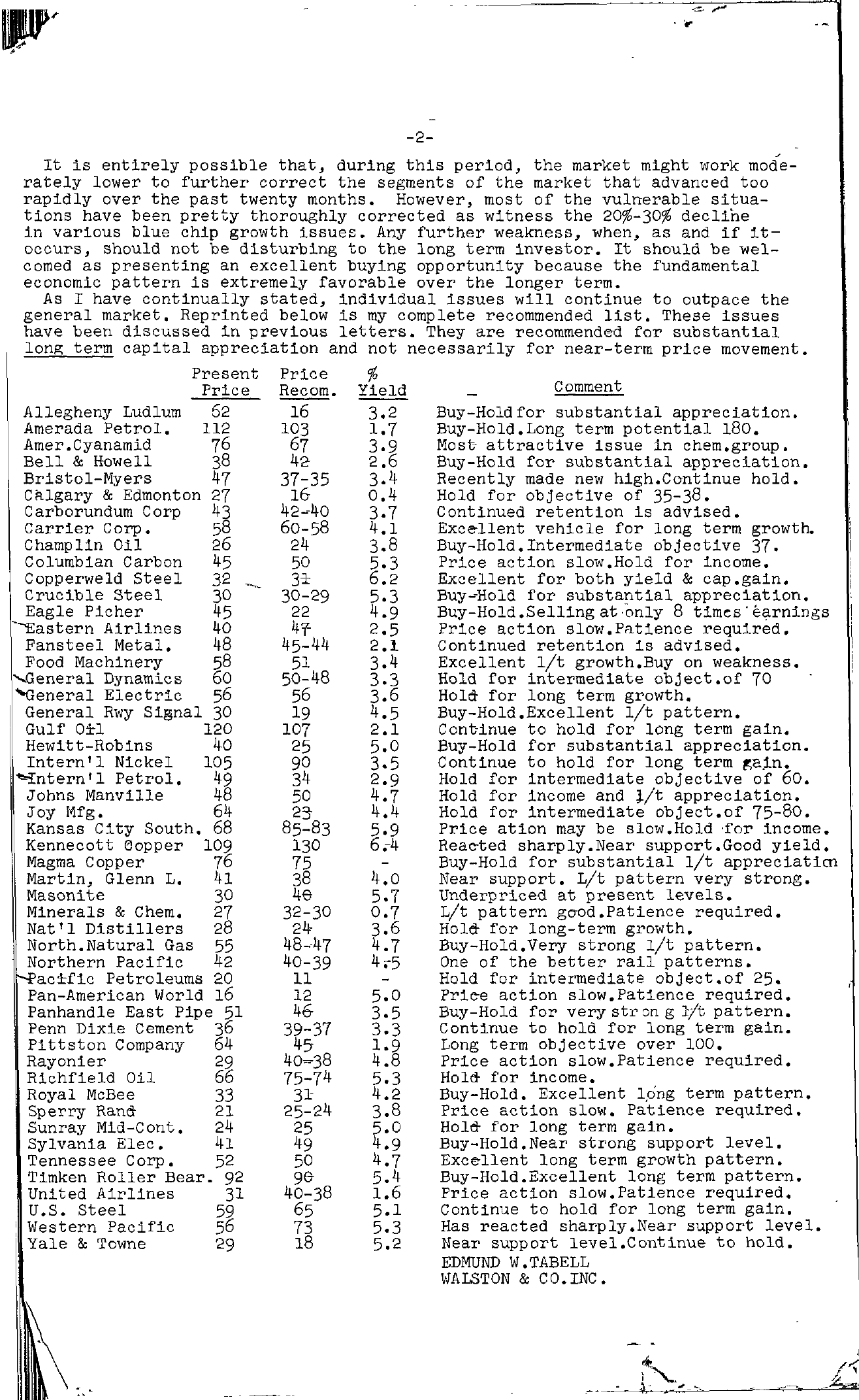 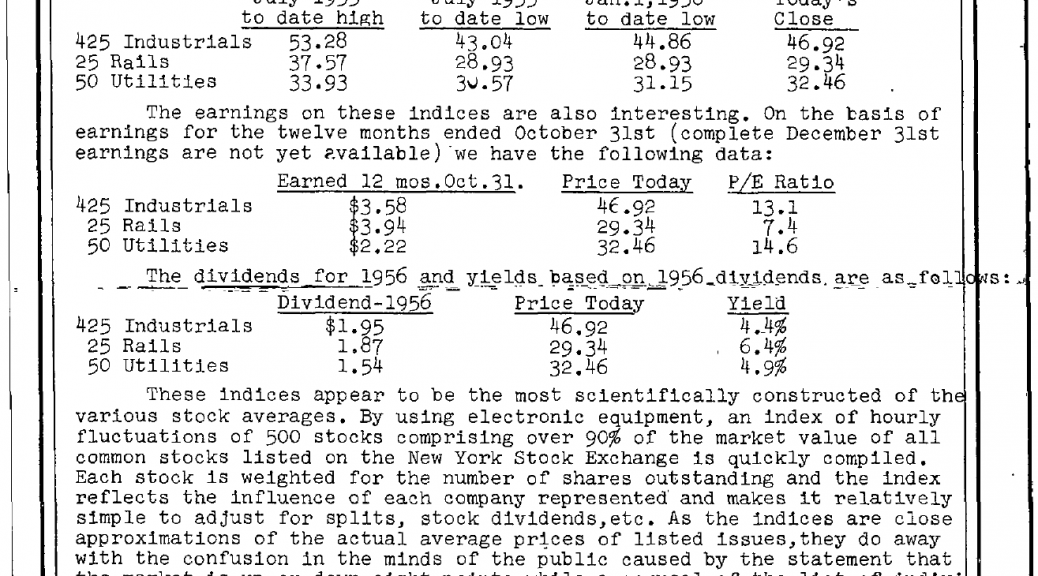 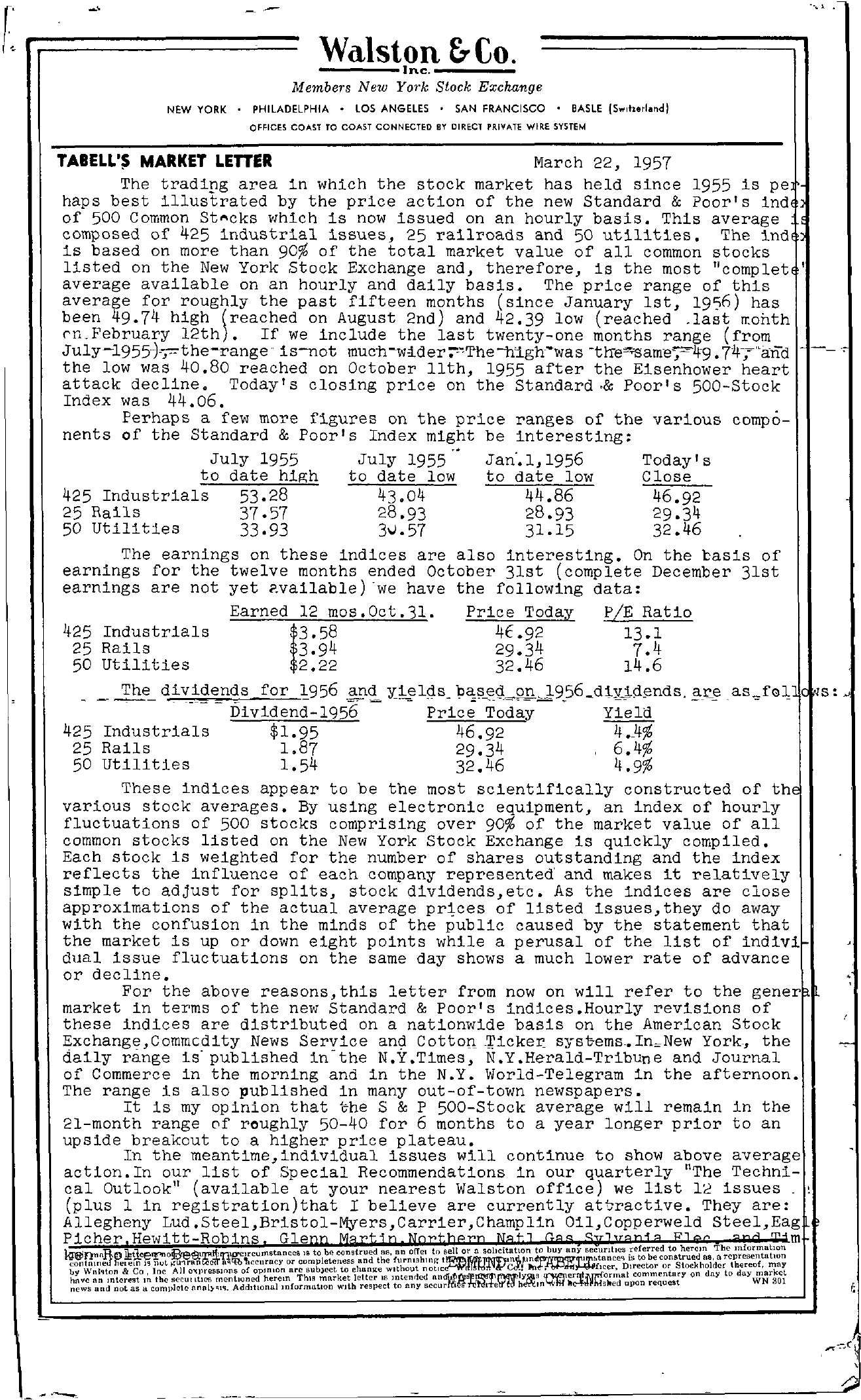 r' J. 1' Wdlston &Co. Inc. Members New Y01'k Stock Exchange NEW YORK PHILADELPHIA LOS ANGELES SAN FRANCISCO BASLE (Sw,ed.,dl OFFICES COAST TO COAST CONNECTED BY DIRECT PRIVATE WIRE SYSTEM MARKET LEnER March 22, 1957 The tradipg area in which the stock market has held since 1955 is pe haps best illustrated by the price action of the new Standard & Poor's ind of 500 Common St … cks which is now issued on an hourly basis. This average composed of 425 industrial issues, 25 railroads and 50 utilities. The ind is based on more than 90 of the total market value of all common stocks listed on the New York Stock Exchange and, therefore, is the most complet I average available on an hourly and daily basis. The price range of this average for roughly the past fifteen months (since January 1st, 195n) has been 49.74 high (reached on August 2nd) and 42.39 low (reached .last rr.onth rn.February 12th). If we include the last twenty-one months range (from is-not muc-h-w1der ;''The41'1gh-was -tlTesame749. 7ir;-infd ' the low was 40.80 reached on October 11th, 1955 after the Eisenhower heart attack decline. Today's closing price on the Standard.& Poor's 500-Stock Index was 44.06. Perhaps a few more figures on the price ranges of the various compo- nents of the Standard & Poor's Index mig,.ht be interesting July 1955 July 1955 Jan'. 1, 1956 Today's to date high to date low to date low Close 425 Industrials 25 Rails 50 Utilities 53.28 37.57 33.93 43.04 28.93 3v.57 44.86 28.93 31.15 46.92 29.34 32.46 The earnings on these indices are also interesting. On the tasis of earnings for the twelve months ended October 31st (complete December 31st earnings are not yet have the following data 425 Industrials 25 Rails 50 Utilities iEarned 12 mos.Oct.31. 3.58 3.94 2.22 Price Today 4E.92 29.34 32.46 PiE Ratio 13.1 7.4 14.6 The dividends for 1956 and yields based , – – – , – Dividend-1956 -, 425 Industrials 25 Rails 50 Utilities 1.95 1.87 1.54 46.92 29.34 32.46 4 .4 6.4 4.9 These indices appear to be the most scientifically constructed of thE various stock averages. By using electronic equipment, an index of hourly fluctuations of 500 stocks comprising over 90 of the market value of all common stocks listed on the New York Stock Exchange is quickly compiled. Each stock is weighted for the number of shares outstanding and the index reflects the influence of each company represented' and makes it relatively simple to adjust for splits, stock dlvidends,etc. As the indices are close approximations of the actual average prtces of listed issues,they do away with the confusion in the minds of the public caused by the statement that the market is up or down eight pOints while a perusal of the list of indivi dual issue fluctuations on the same day shows a much lower rate of advance or decline. For the above reasons,this letter from now on will refer to the gener market in terms of the new Standard & Poor's indices.Hourly revisions of these indices are distributed on a nationwide basis on the American Stock Exchange,Commcdity News Service and Cotton'J.'icker York, the daily range is-published in-the N.Y.Times, N.Y.Herald-Tribune and Journal of Commerce in the morning and in the N.Y. World-Telegram in the afternoon. The range is also published in many out-of-town newspapers. It is my opinion that the S & P 500-Stock average will remain in the 21-month range of roughly 50-40 for 6 months to a year longer prior to an upside breakout to a higher price plateau. In the meantime,individual issues will continue to show above average action.In our list of Special Recommendations in our quarterly The Techni- cal Outlook (available at your nearest Walston office) we list 12 issues , (plus 1 in registration)that I believe are currently They are Allegheny Lud.Steel,Bristol-Myers,Carrier,Champlin Oil,Copperweld Steel,Eag Picher,Hewitt-Robins. Glenp Nat' Ga ,Sy'van1a and T;;lmkminnnRCl cOlltmm,fneletn lW(, IS ofTelMartip Northern n'l \'ccurllcy or to construed as, completeness and the faUnh'mshmtgo sell or n s to buy uny Flee Director or Stockholder thereof, may hy & Co, Inc All C'I(preSSlons of Opl111on nrc subJect to chnllge Wit hnnevwes nanndInnteorteasst Imi ctohmepaleectcut Ittes menAtidodnIetdIOhnearleminioTrmhinStlmOanrk…..eItthlertetsepreIcSt mtoteanny SCnCnlir I In1WtH' commentllry on dny to day market s)ted upon request WN 301 ,, 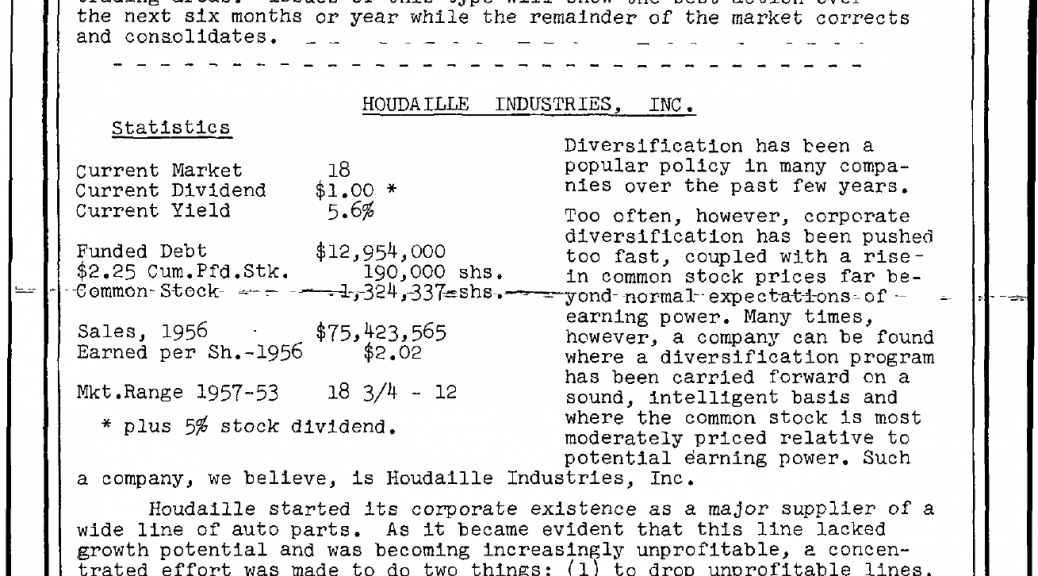 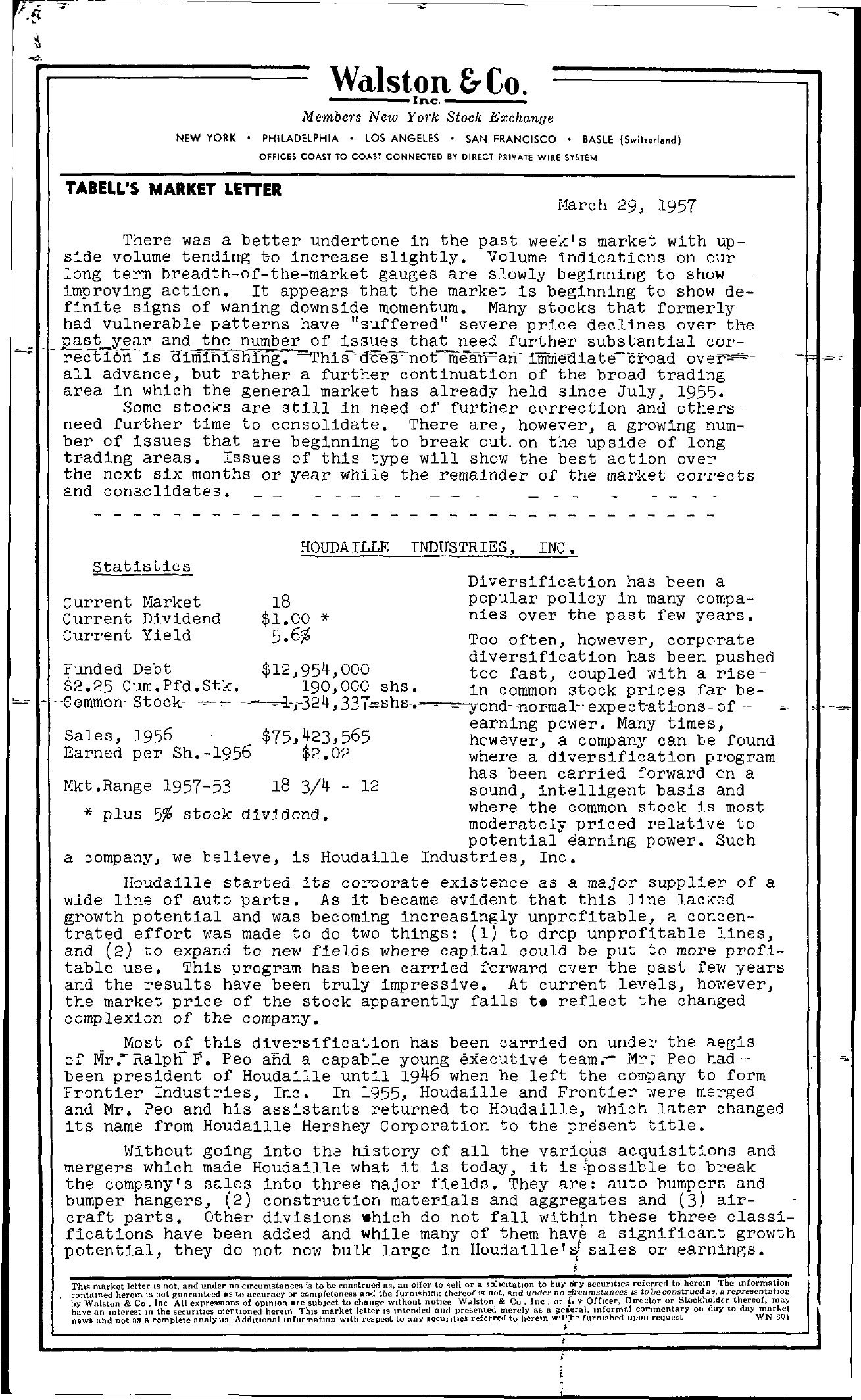 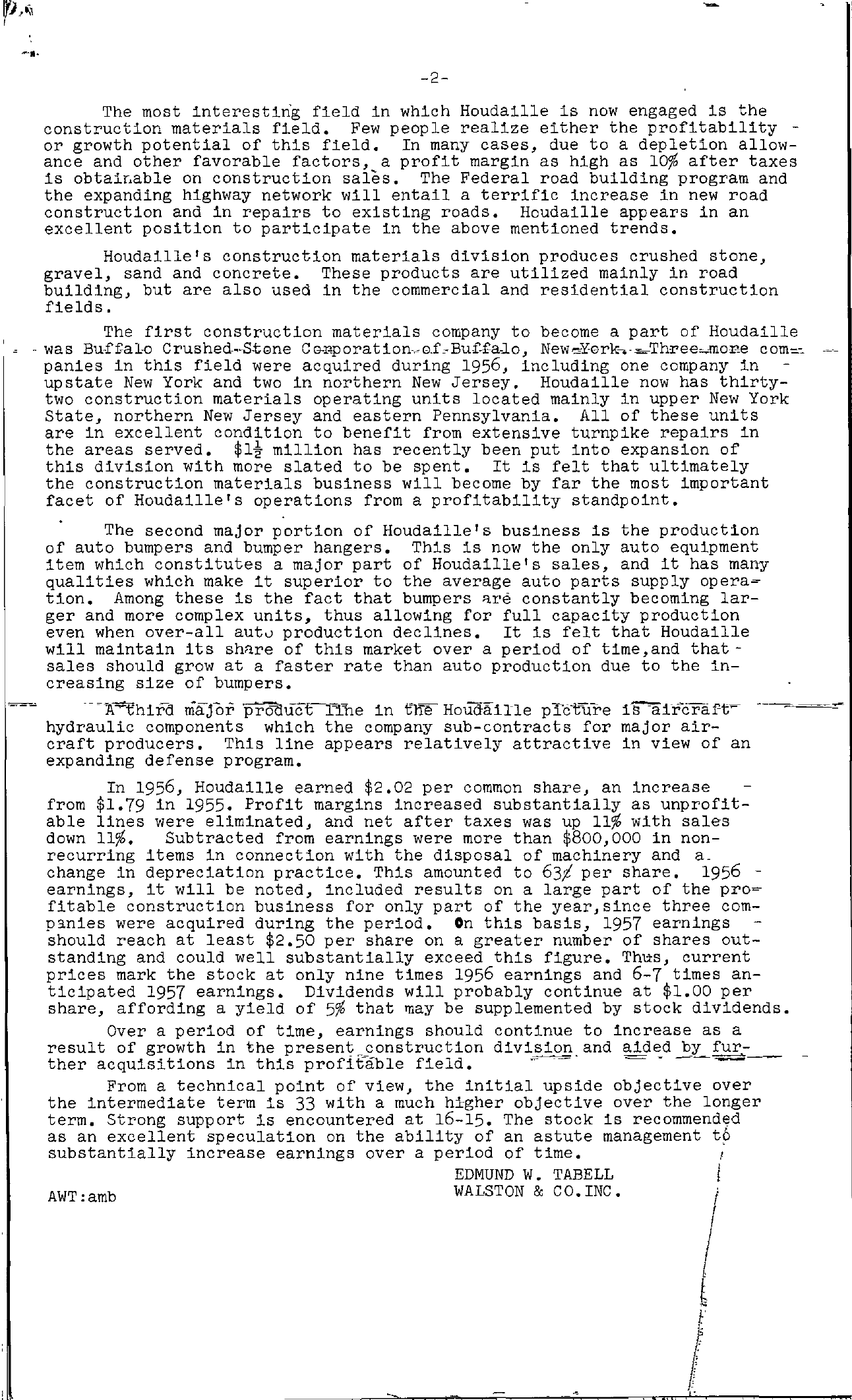