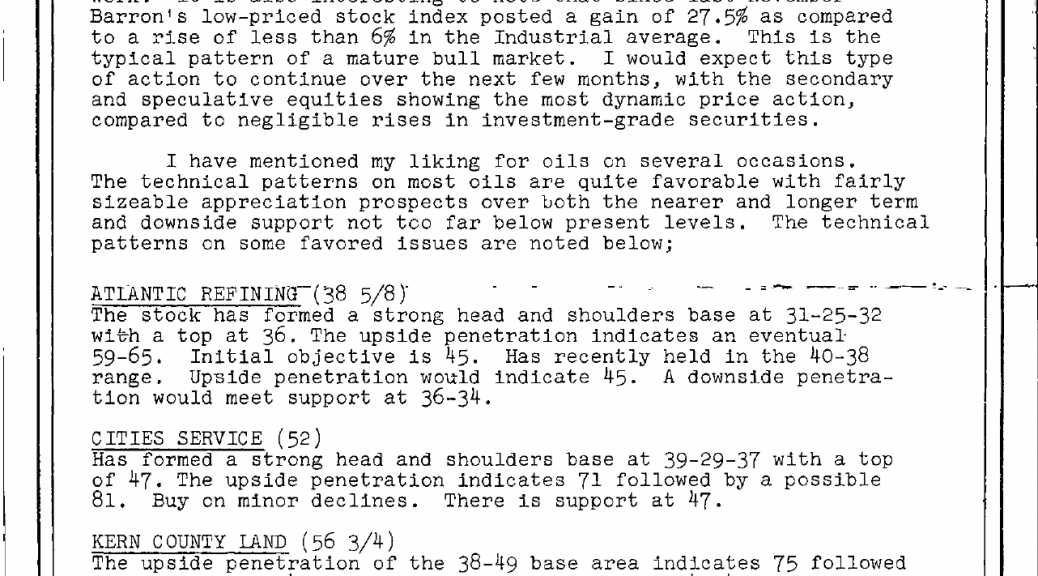 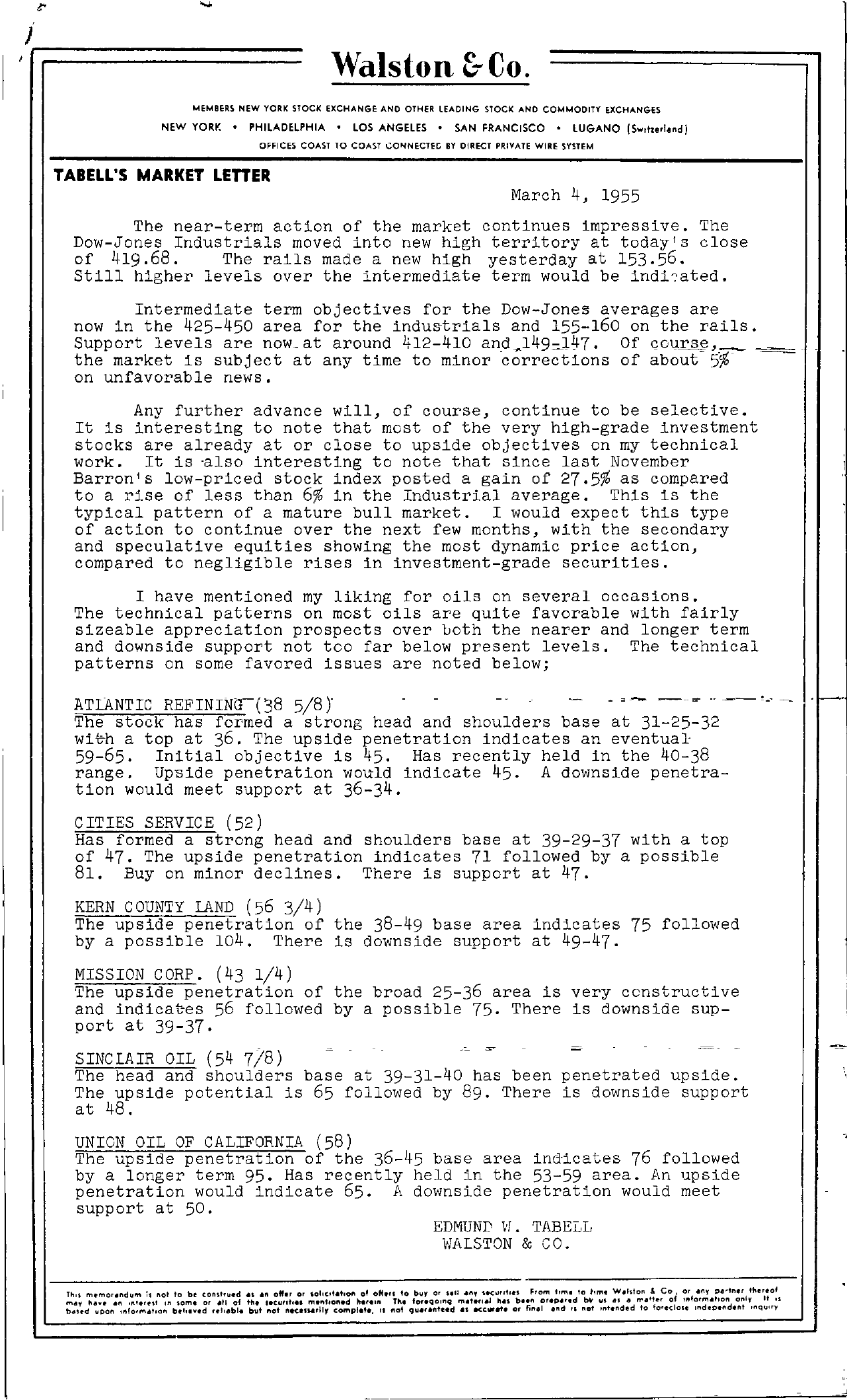 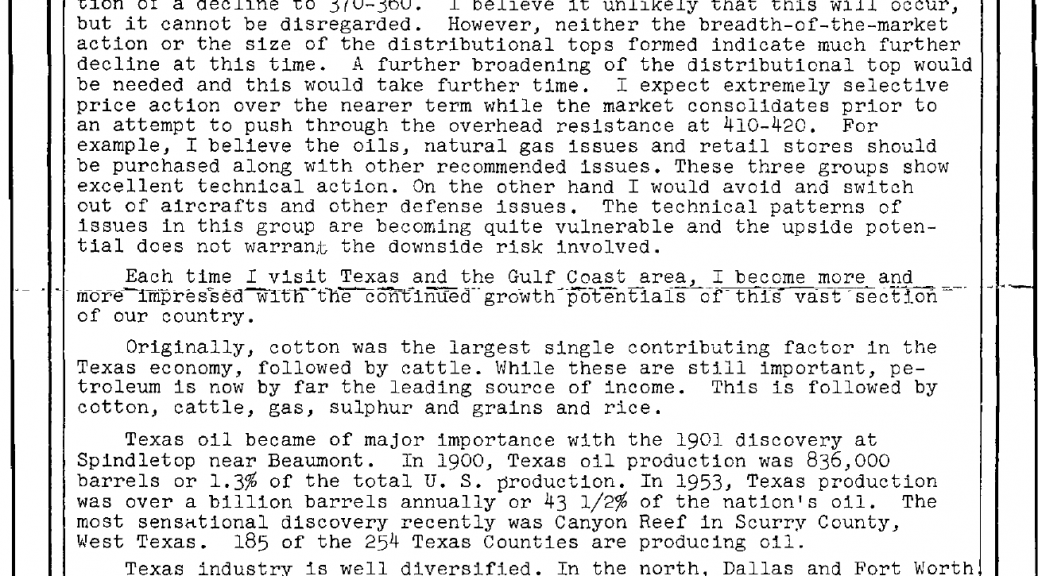 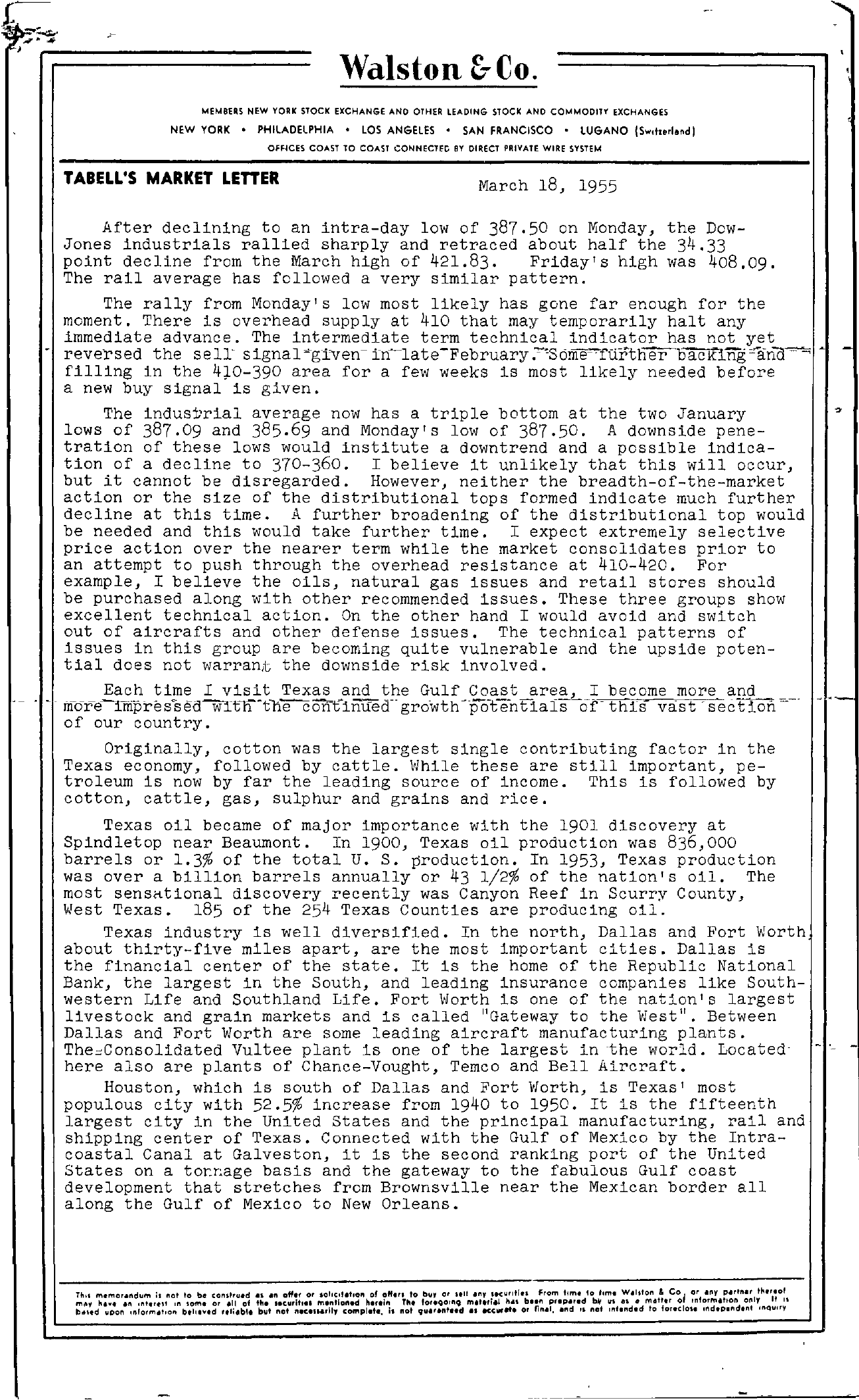 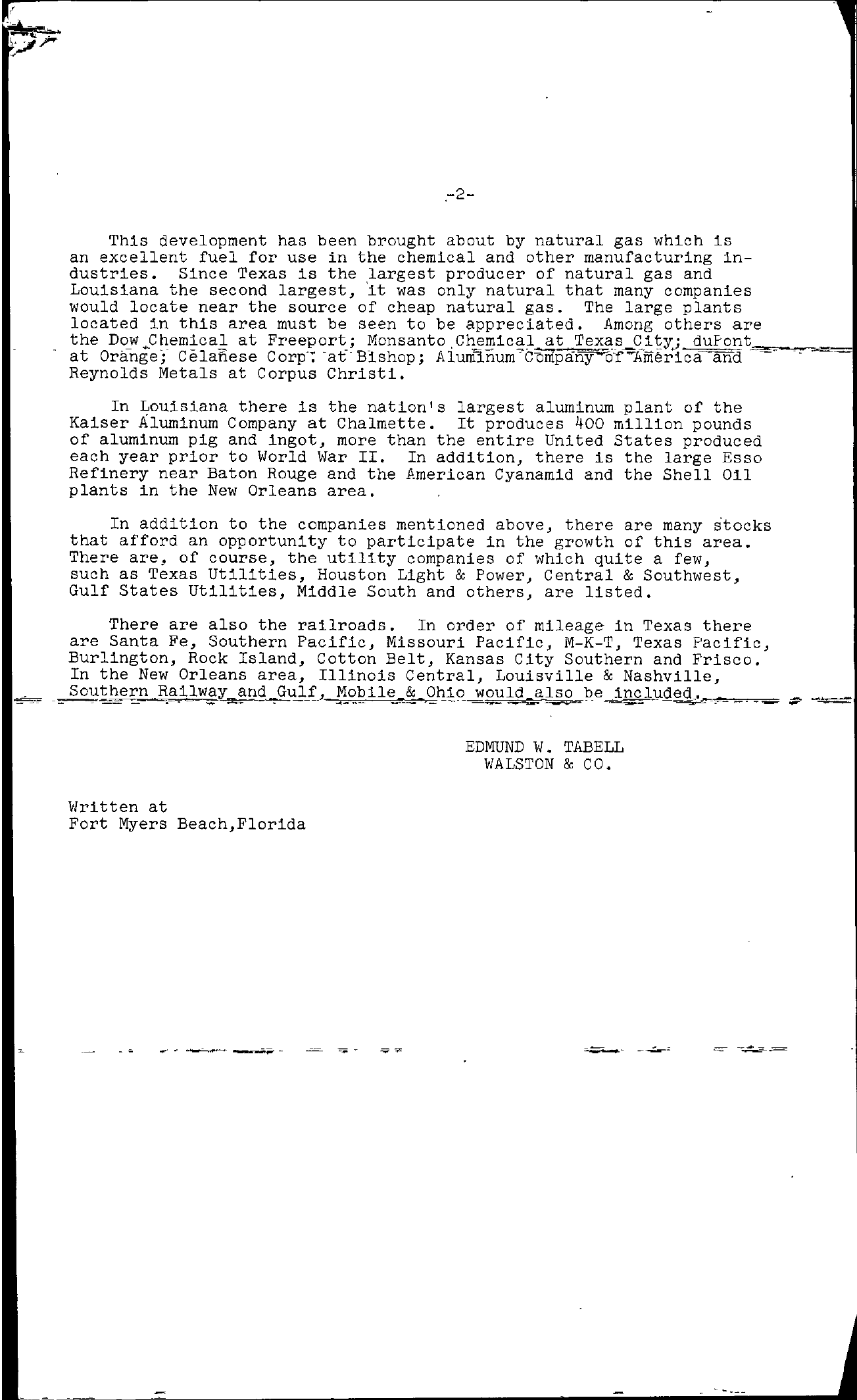 Walston &Co. ,, MEMBERS NEW YORK STOCK ElCCHANGE AND OTHER LEADING STOCK AND COMMODITY ElCCHANGES NEW YORK PHILADelPHIA LOS ANGELES SAN FRANCISCO LUGANO (Sw,t,ldl OFFICES COAST TO COAST CONNECTEC BY DIRECT PRIVATE WIRE SYSTEM TABELL'S MARKET LEnER March 18, 1955 After declining to an intra-day low of 387.50 on Monday, the DowJones industrials rallied sharply and retraced about half the 34.33 point decline from the March high of 421.83. Friday's high was 408.09. The rail average has followed a very similar pattern. The rally from Monday's low most likely has gone far enough for the moment. There is overhead supply at 410 that may temporarily halt any immediate advance. The intermediate term technical indicator has not yet . reve-rsed the sell- signal .-Sdme–fiirther oaclITng filling in the area for a few weeks is most likely needed before a new buy signal is given. The industrial average now has a triple bottom at the two January lows of 387.09 and 385.69 and Monday's low of 387.50. A downside penetration of these lows would institute a downtrend and a possible indication of a decline to 370-360. I believe it unlikely that this will occur, but it cannot be disregarded. However, neither the breadth-of-the-market action or the size of the distributional tops formed indicate much further decline at this time. A further broadening of the distributional top would be needed and this would take further time. I expect extremely selective price action over the nearer term while the market consolidates prior to an attempt to push through the overhead resistance at 410-420. For example, I believe the oils, natural gas issues and retail stores should be purchased along with other recommended issues. These three groups show excellent technical action. On the other hand I would avoid and sWitch out of aircrafts and other defense issues. The technical patterns of issues in this group are becoming quite vulnerable and the upside potential does not warrant the downside risk involved. – Each time I visit Texas and thegroGwutlhf–Cpooa-sftenatrleaa1,sofI- bthecloSmve amstor-esecatnIdOn — of our country. Originally, cotton was the largest single contributing factor in the Texas economy, followed by cattle. While these are still important, petroleum is now by far the leading source of income. This is followed by cotton, cattle, gas, sulphur and grains and rice. Texas oil became of major importance with the 1901 discovery at Spindletop near Beaumont. In 1900, Texas oil production was 836,000 barrels or 1.3 of the total U. S. production. In 1953, Texas production was over a billion barrels annually or 43 1/2 of the nation's oil. The most sensational discovery recently was Canyon Reef in Scurry County, West Texas. 185 of the 254 Texas Counties are producing oil. Texas industry is well diversified. In the north, Dallas and Fort Worth about thirty-five miles apart, are the most important cities. Dallas is the financial center of the state. It is the home of the Republic National Bank, the largest in the South, and leading insurance companies like Southwestern Life and Southland Life. Fort Worth is one of the nation's largest livestock and grain markets and is called Gateway to the 1-lest. Between Dallas and Fort Worth are some leading aircraft manufacturing plants. TheConsolidated Vultee plant is one of the largest in the world. Located here also are plants of Chance-Vought, Temco and Bell Aircraft. Houston, which is south of Dallas and Fort Worth, is Texas' most populous city with 52.5 increase from 1940 to 1950. It is the fifteenth largest city in the United States and the principal manufacturing, rail and shipping center of Texas. Connected with the Gulf of Mexico by the Intracoastal Canal at Galveston, it is the second ranking port of the United States on a tonnage basis and the gateway to the fabulous Gulf coast development that stretches from Brownsville near the Mexican border all along the Gulf of Mexico to New Orleans. .. ,-2- This development has been brought about by natural gas which is an excellent fuel for use in the chemical and other manufacturing industries. Since Texas is the largest producer of natural gas and Louisiana the second largest, 'it was only natural that many companies would locate near the source of cheap natural gas. The large plants located in this area must be seen to be appreciated. Among others are the Dow Chemical at Freeport; Monsanto Chemical at Texas City; at Ora-nge; Celanese Corp' -afBlshop; Reynolds Metals at Corpus Christi. In Louisiana there is the nation's largest aluminum plant of the Kaiser Aluminum Company at Chalmette. It produces 400 million pounds of aluminum pig and ingot, more than the entire United States produced each year prior to World War II. In addition, there is the large Esso Refinery near Baton Rouge and the American Cyanamid and the Shell Oil plants in the New Orleans area. In addition to the companies mentioned above, there are many stocks that afford an opportunity to participate in the growth of this area. There are, of course, the utility companies of which quite a few, such as Texas Utilities, Houston Light & Power, Central & Southwest, Gulf States Utilities, Middle South and others, are listed. There are also the railroads. In order of mileage in Texas there are Santa Fe, Southern Pacific, Missouri Pacific, M-K-T, Texas Pacific, Burlington, Rock Island, Cotton Belt, Kansas City Southern and Frisco. In the New Orleans area, Illinois Central, Louisville & Nashville, -S-o-u!,hern ansI ,Gu.f, Mobile & .ohio , ;;;- …,..,1 Written at Fort Myers Beach,Florida EDMUND VI. TABELL WALSTON & CO. 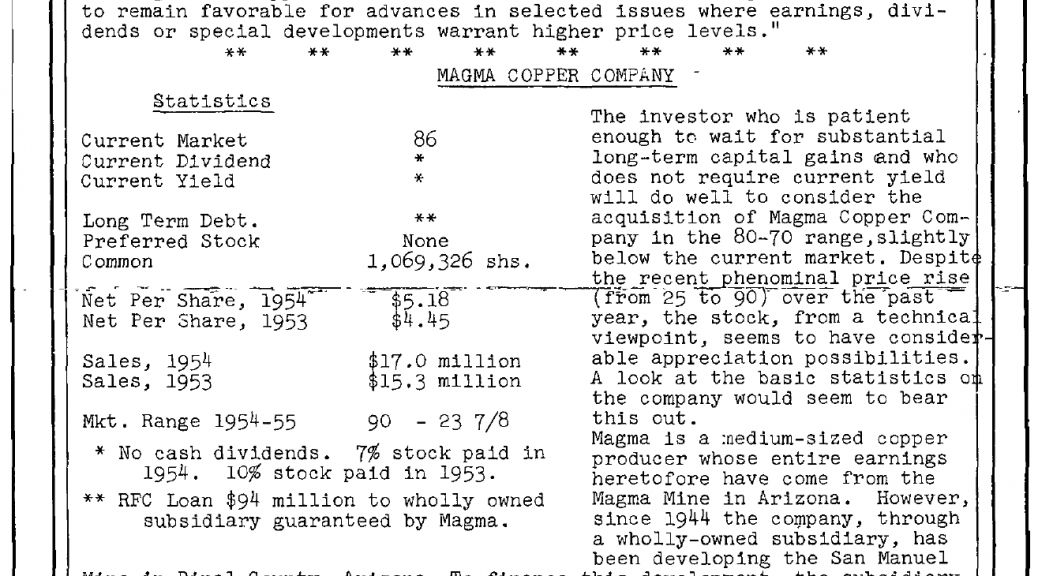 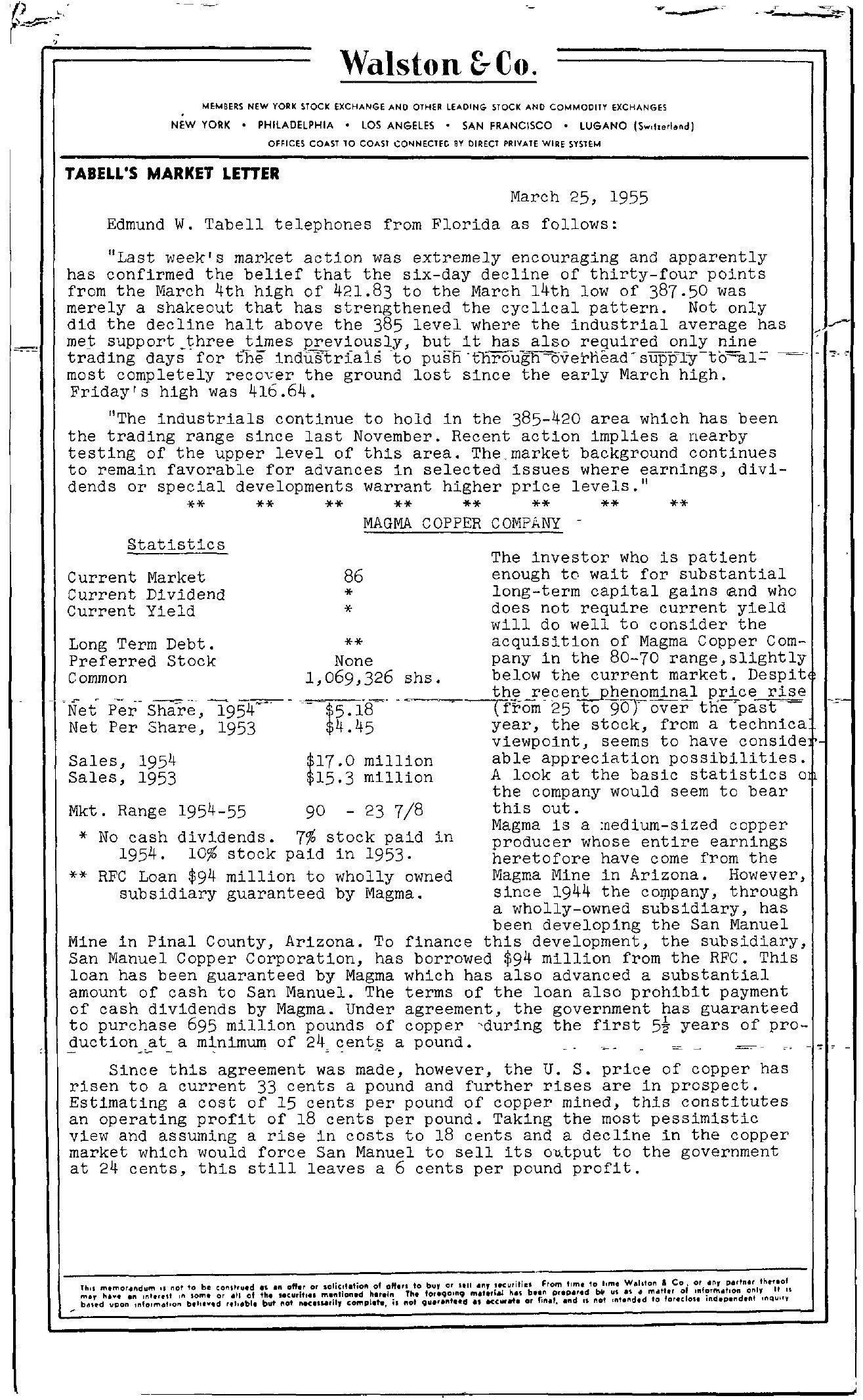