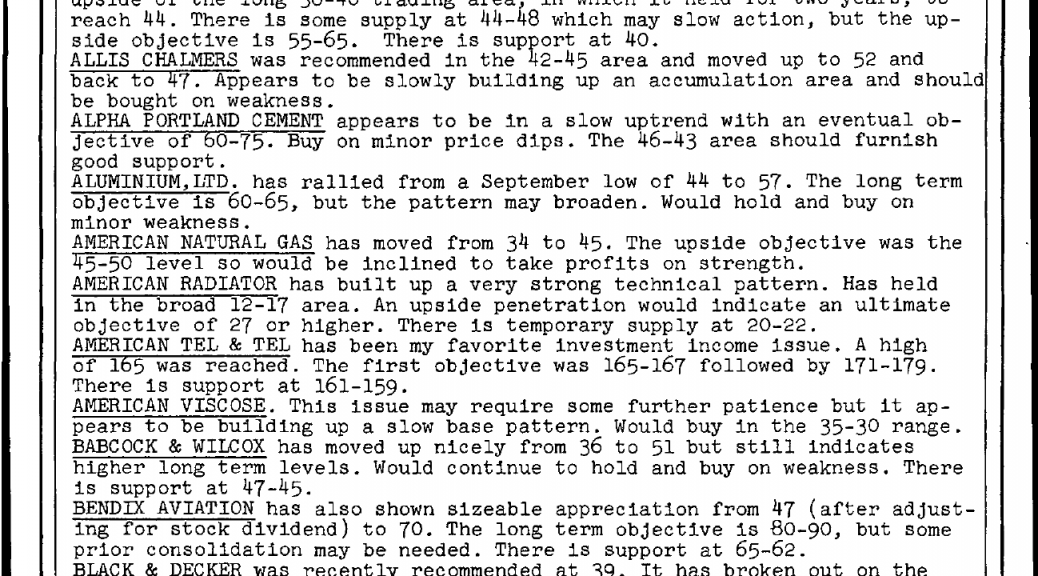 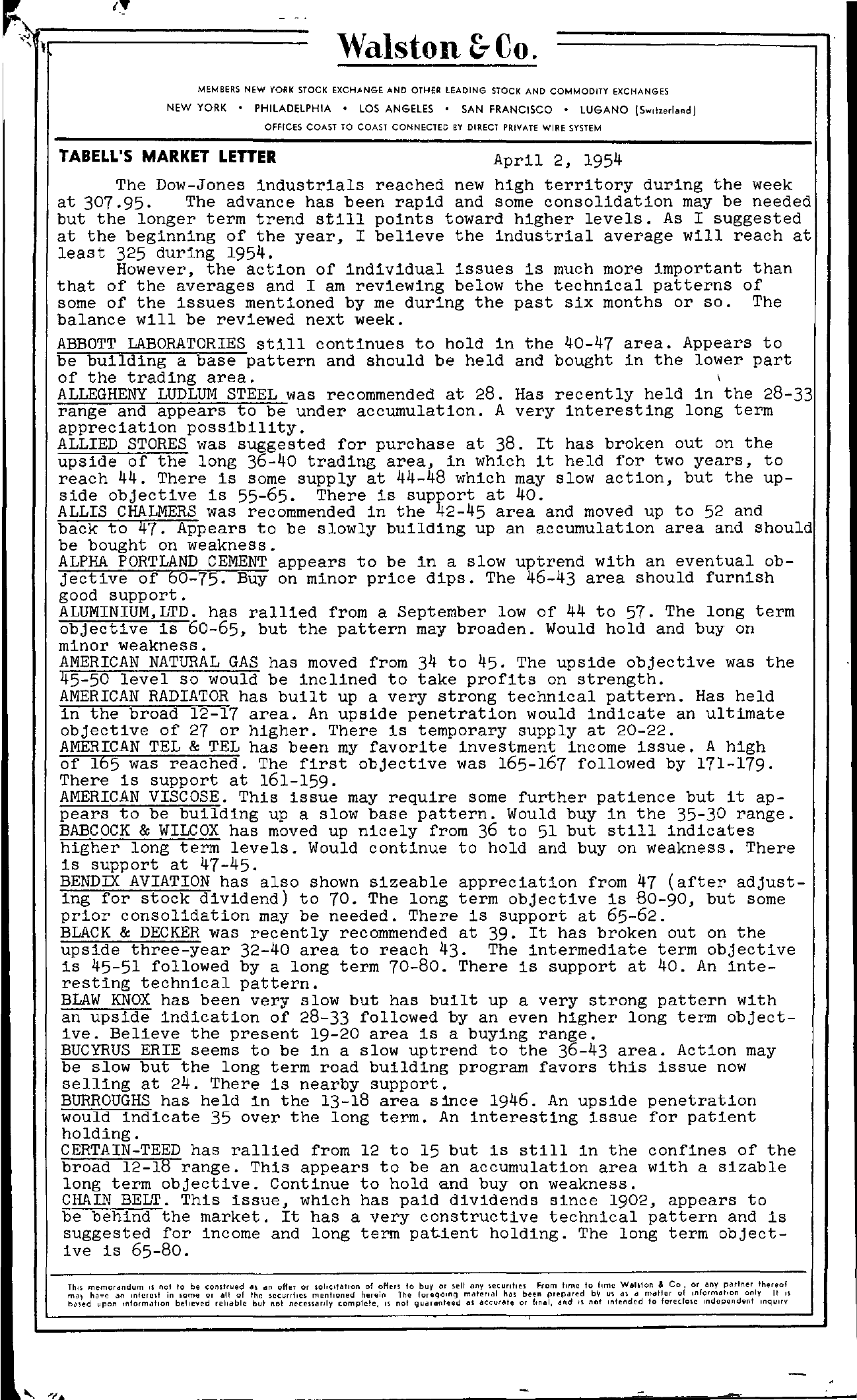 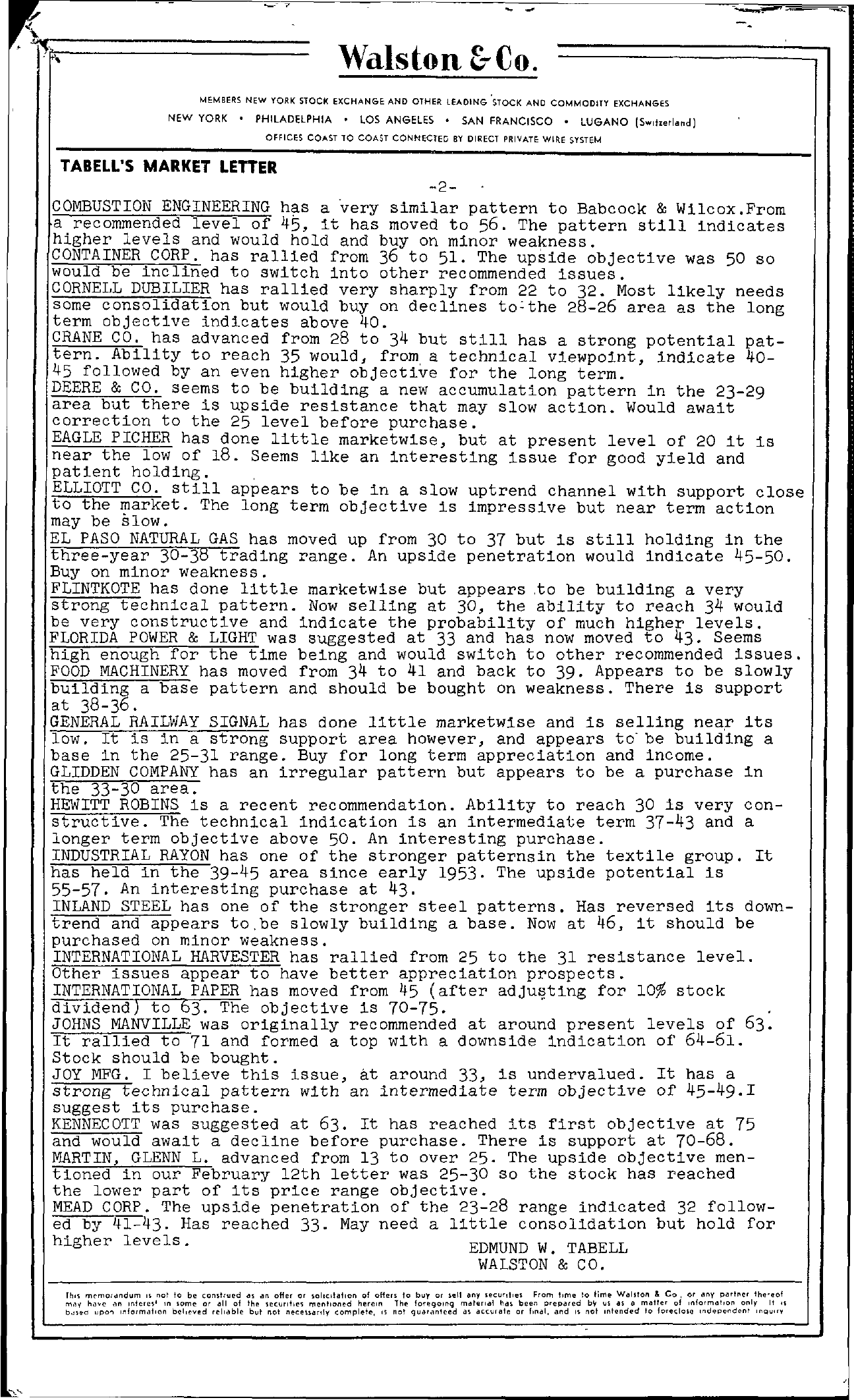 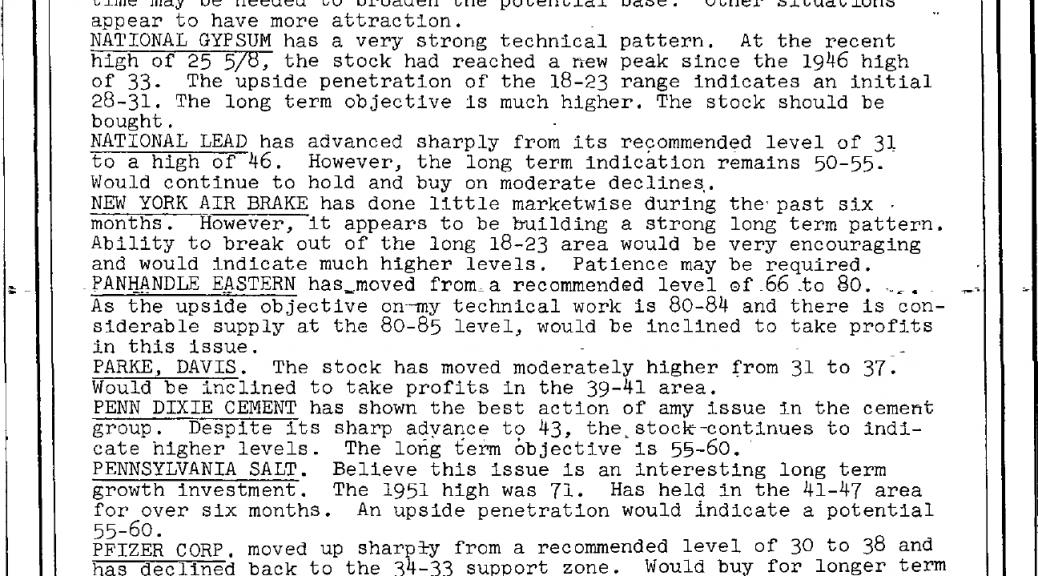 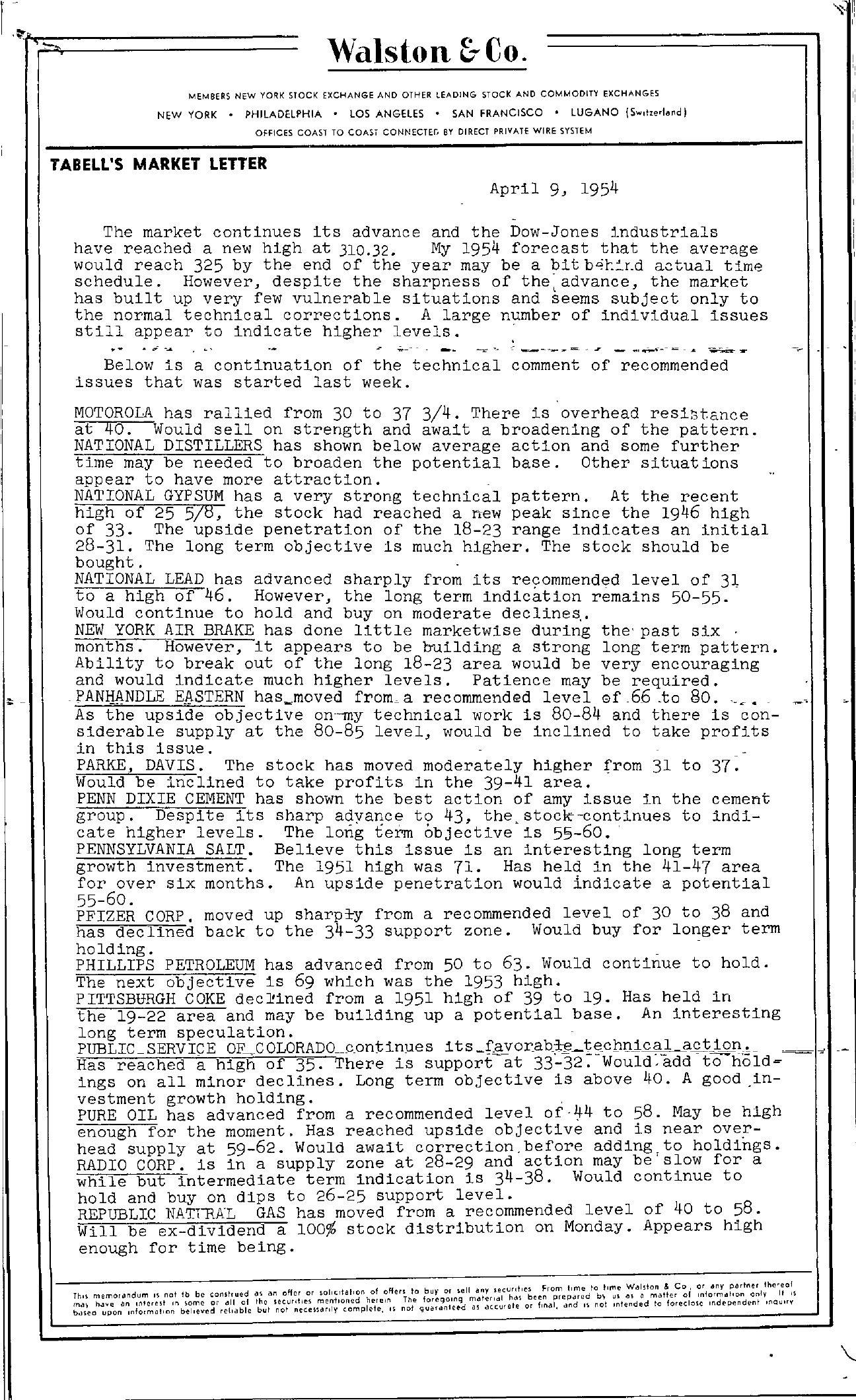 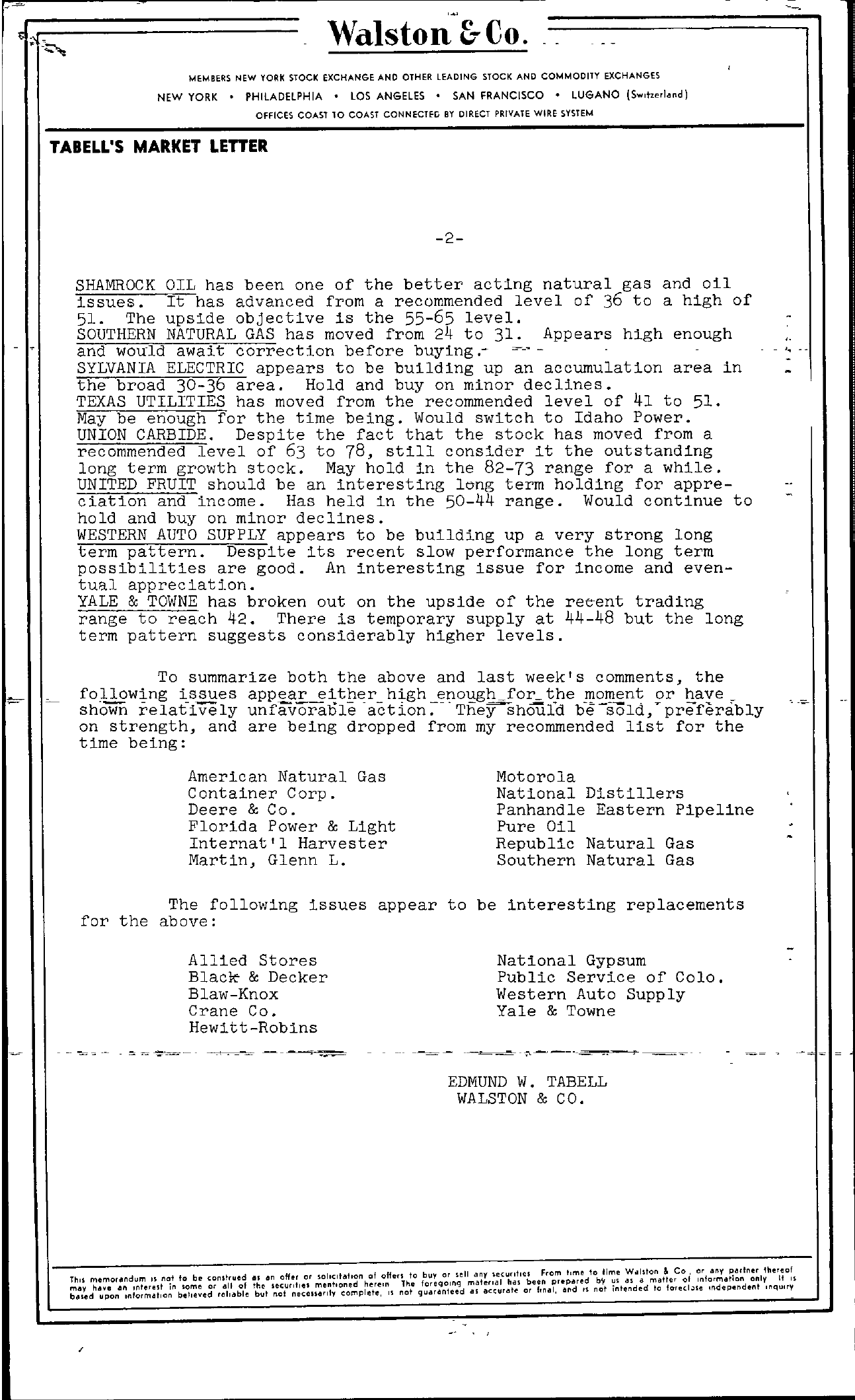 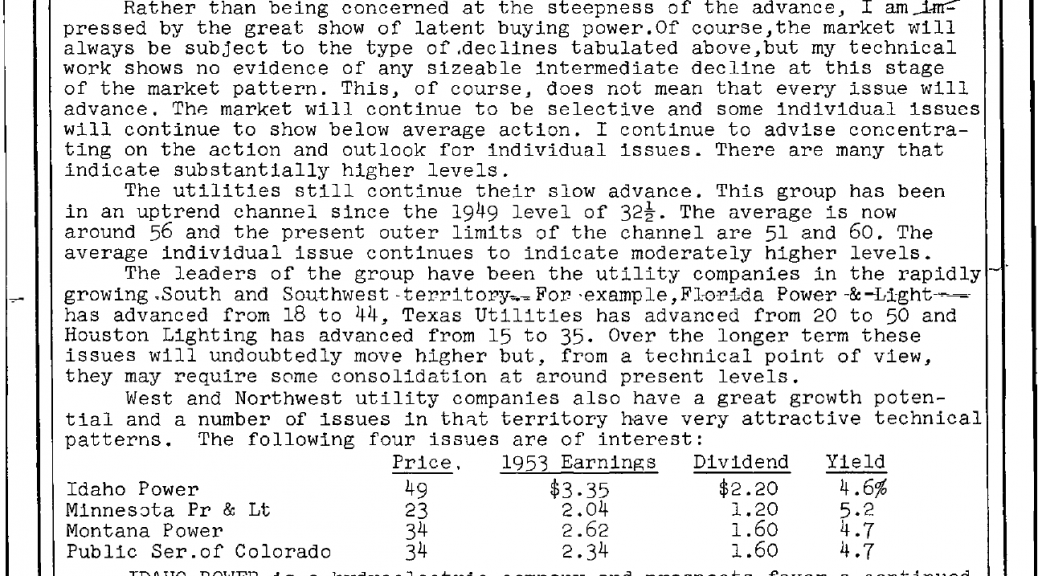 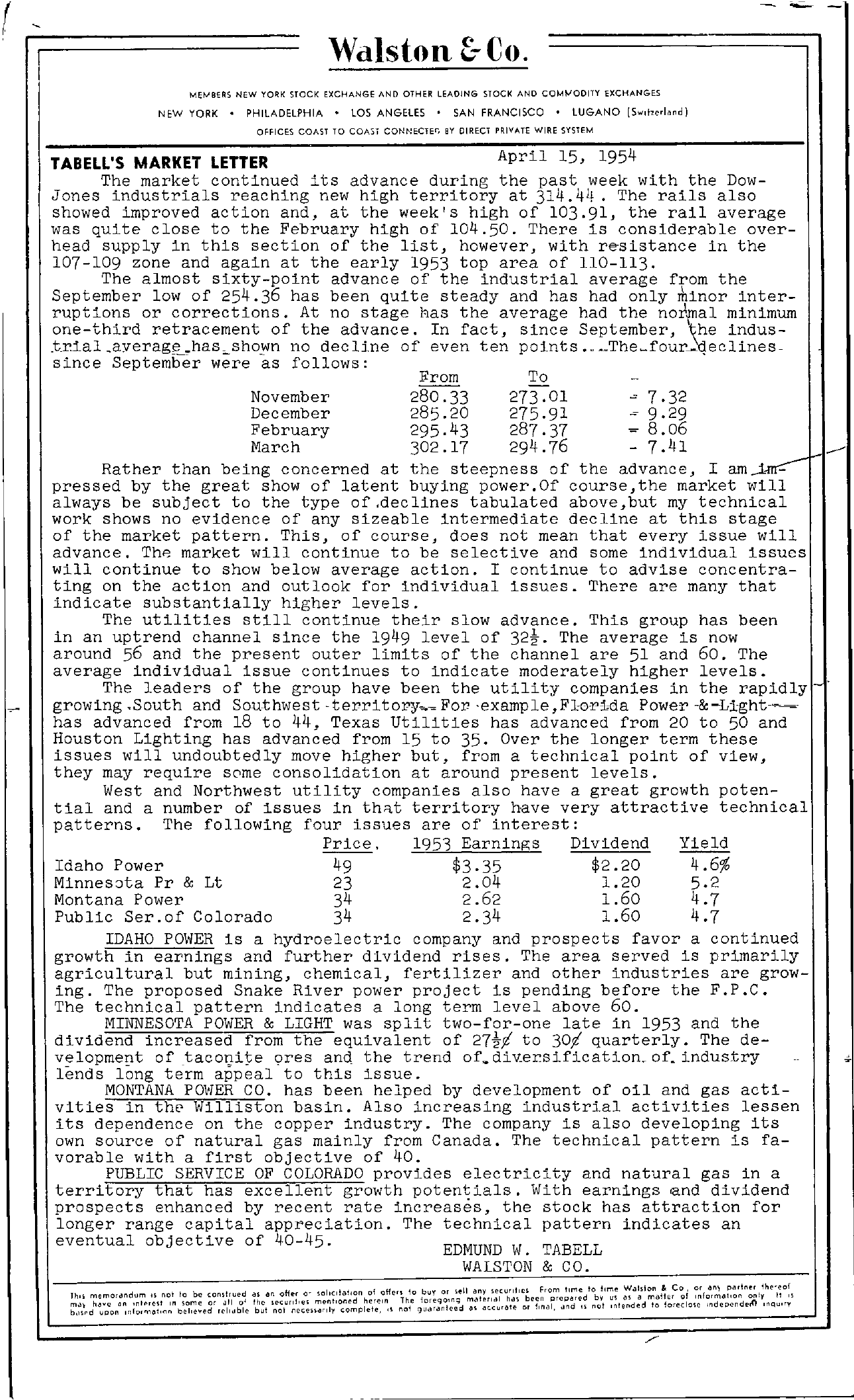 ( Walston &- Co. 11 MEtJBERS NEW YORK STOCK EXCHANGE AND OTHER LEADING STOCK AND CQMtvlODITY EXCHANGES NEW YORK PHILADELPHIA LOS ANGELES SAN fRANCISCO LUGANO (Swd,ld) OFFICES COAST TO eOAS; CONNECTEr. BY DIRECT PRIVATE WIRE SYSTEM TABELL'S MARKET LETTER April 15, 1954 The market continued its advance during the past week with the Dow- Jones industrials reaching new high territory at 314.41. The rails also showed improved action and, at the week's high of 103.91, the rail average was quite close to the February high of 104.50. There is considerable over- head supply in this section of the list, however, with rsistance in the 107-109 zone and again at the early 1953 top area of 110-113. The almost sixty-point advance of the industrial average from the September low of 254.36 has been quite steady and has had only minor interruptions or corrections. At no stage has the average had the noal minimum one-third retracement of the advance. In fact, Since September, the indus.tr.ialayerag,–,hasshown no decline of even ten points .Thefourqeclines since September were as follows From To – November 280.33 273.01 7.32 December 285.20 275.91 9.29 February 295.43 287.37 8.06 March 302.17 294.76 – 7.41 Rather than being concerned at the steepness of the advance, I am pressed by the great show of latent buying power.Of course,the market will always be subject to the type of.declines tabulated above,but my technical work shows no evidence of any Sizeable intermediate decline at this stage of the market pattern. ThiS, of course, does not mean that every issue will advance. ThA market will continue to be selective and some individual issues will continue to show below average action. I continue to advise concentra- ting on the action and outlook for individual issues. There are many that indicate substantially higher levels. The utilities still continue their slow advance. This group has been in an uptrend channel Since the 1949 level of 32. The average is now around 56 and the present outer limits of the channel are 51 and 60. The average individual issue continues to indicate moderately higher levels. The leaders of the group have been the utility companies in the rapidly- growing .South and Southwest terri tory. For examp le, Flopi-da Power -& -Light- has advanced from 18 to 44, Texas Utilities has advanced from 20 to 50 and Houston Lighting has advanced from 15 to 35. Over the longer term these issues will undoubtedly move higher but, from a technical point of view, they may require some consolidation at around present levels. West and Northwest utility companies also have a great growth poten- tial and a number of issues in thctt territory have very attractive technical patterns. The following four issues are of interest Price, 1953 Earnings Dividend Yield Idaho Power Minnesota PI' & Lt Montana Power Public Ser.of Colorado 49 23 34 34 3.35 2.04 2.62 2.34 2.20 1.20 1.60 1.60 4.6 5.2 4.7 4.7 IDAHO POWER is a hydroelectric company and prospects favor a continued growth in earnings and further dividend rises. The area served is primarily agricultural but mining, chemical, fertilizer and other industries are grow- ing. The proposed Snake River power project is pending before the F.P.C. The technical pattern indicates a long term level above 60. MINNESOTA POWER & LIGHT was split two-for-one late in 1953 and the dividend increased from the equivalent of 271 to 301 quarterly. The de- velopment oftacoQite ores and the trend of.diersification.of.industry lends long term appeal to this issue. MONTANA POltlER CO. has been helped by development of oil and gas acti- vities in thp Williston basin. Also increasing industrial activities lessen its dependence on the copper industry. The company is also developing its own source of natural gas mainly from Canada. The technical pattern is fa- vorable with a first objective of 40. PUBLIC SERVICE OF COLORADO provides electricity and natural gas in a territory that has excellent growth potentials. With earnings nd dividend prospects enhanced by recent rate increases, the stock has attraction for longer range capital appreciation. The technical pattern indicates an eventual objective of 40-45. EDMUND W. TABELL WALSTON & CO. ThiS m,) mh,c,mcofdannd'unml'leS1noItn 10 be some conslrued or ali o' f ff t as an offer o' soliCitatIon 0 0 Cf\ 0 Inc sccunhcl mel'll,oned hereIn The bI ur or toreqot,n ge II an I m(l Yrsle.IcJuh!n,lSl,Ubee1nFnr(lolpmre(lplnuddnrcc,d\ 1onboltimu,nseteCWnISdaedhdlemntolt&'!orrCecoolO,f HOInlrfo,arnnmdeaptpIeaonrndinreonrnlyt,hneq'uIcIloryrIS b,,d upon ,nfor'l1(lt,,,n beheyed rcl,ble but not necess(lrily complete, ,\ not gU(lr(ln cc d (I dc.cura C or' , 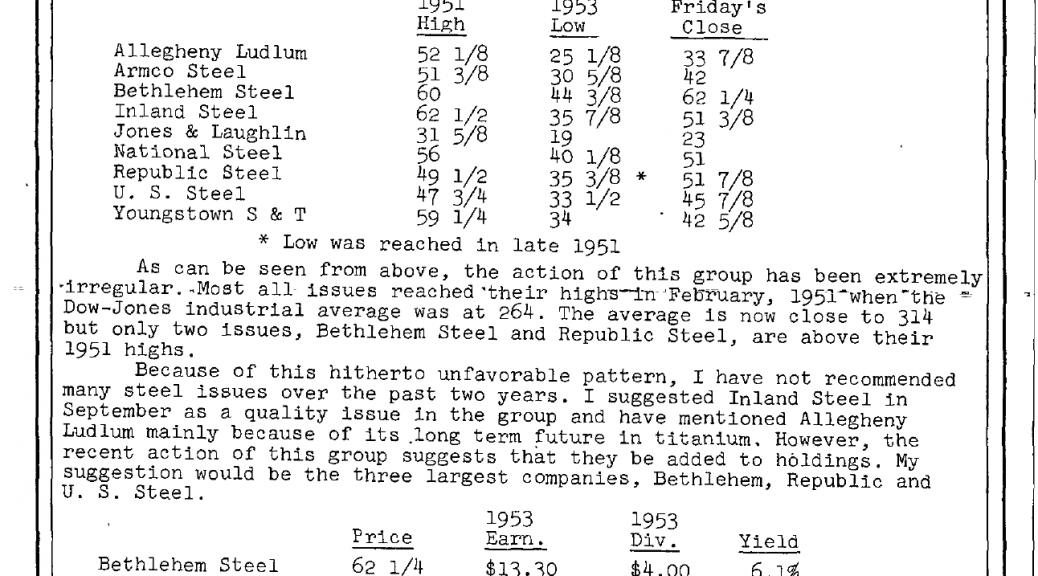 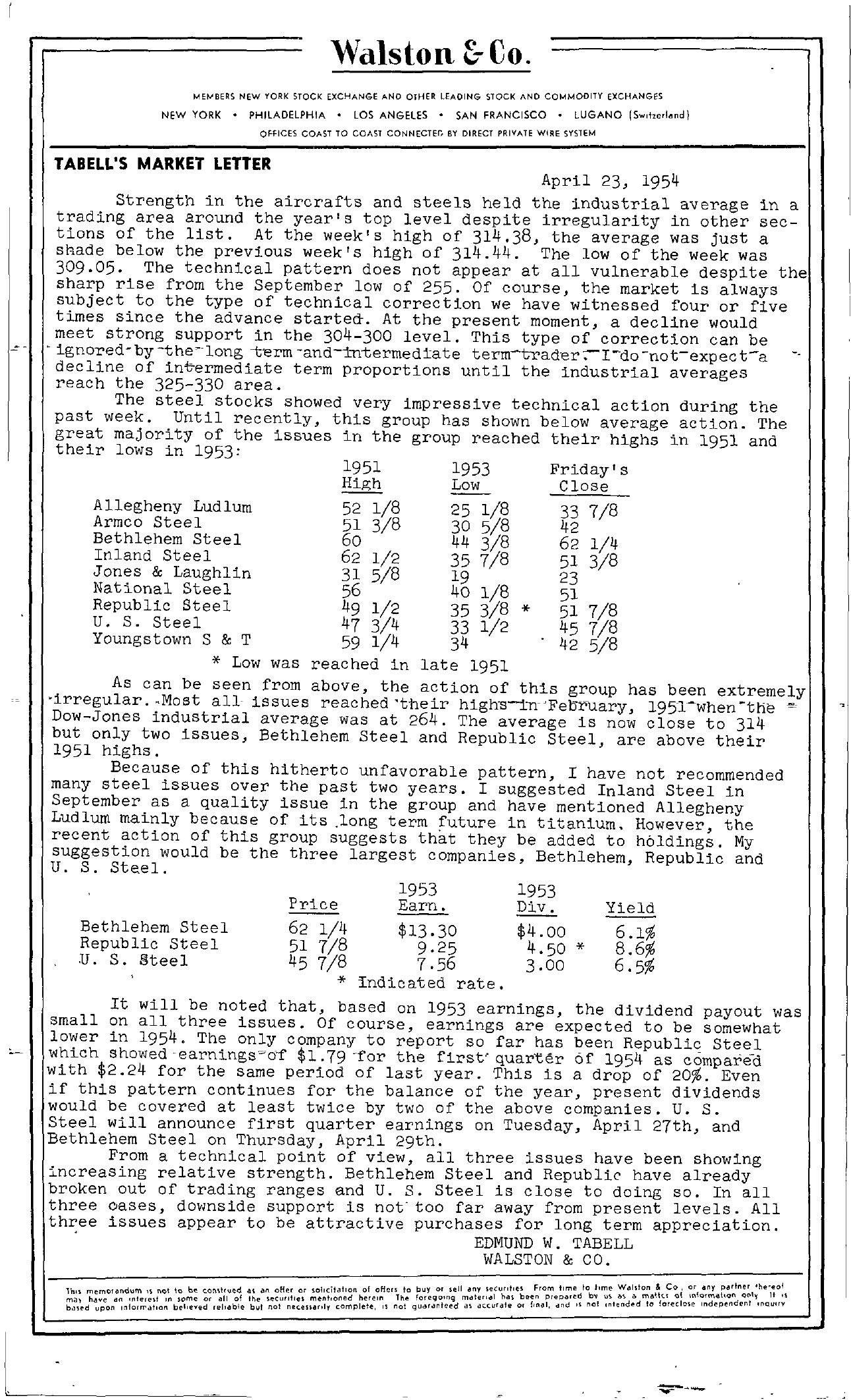 Walston &Co. MEtJBERS NEW YORK STOCK EXCHANGE AND OTHER LEADING STOCK AND COMMODITY EXCHANGES NEW YORK PHILADELPHIA LOS ANGELES SAN FRANCISCO LUGANO (Switzerland J OffiCES COAST TO COAST CONNECTEr. BY DIRECT PRIVATE WIRE SYSTEM TABELL'S MARKET LEnER April 23, 1954 Strength in the aircrafts and steels held the industrial average in a trading area around the year's top level despite irregularity in other sections of the list. At the week's high of 314.38, the average was just a shade below the previous week's high of 314.44. The low of the week was 309.05. The technical pattern does not appear at all vulnerable despite the sharp rise from the September low of 255. Of course, the market is always subject to the type of technical correction we have witnessed four or five times since the advance started. At the present moment, a decline would meet strong support in the 304-300 level. This type of correction can be ignored -by -the'-long -term -and-intermediate term-trader- I–do -not-expec t-a decline of inermediate term proportions until the industrial averages reach the 325-330 area. The steel stocks showed very impressive technical action during the past week. Until recently, this group has shown below average action. The great majority of the issues in the group reached their highs in 1951 and their lows in 1953 1951 High 1953 -Low- Friday's Close Allegheny Ludlum Armco Steel Bethlehem Steel Inland Steel Jones & Laughlin National Steel Republic Steel U. S. Steel Youngstown S & T 52 1/8 51 3/8 60 62 1/2 31 5/8 56 49 1/2 47 3/4 59 1/4 25 1/8 30 5/8 44 3/8 35 7/8 19 40 1/8 35 3/8 33 1/2 34 33 7/8 42 62 1/4 51 3/8 23 51 51 7/8 45 7/8 42 5/8 Low was reached in late 1951 As can be seen from above, the action of this group has been extremely 'irregular. Most all issues reached their highs-in-Fetiruary, 1951-when tlie Dow-Jones industrial average was at 264. The average is now close to 314 but only two issues, Bethlehem Steel and Republic Steel, are above their 1951 highs. Because of this hitherto unfavorable pattern, I have not recommended many steel issues over the past two years. I suggested Inland Steel in September as a quality issue in the group and have mentioned Allegheny Ludlum mainly because of its .long term future in titanium. However, the recent action of this group suggests that they be added to holdings. My suggestion would be the three largest companies, Bethlehem, Republic and U. S. Ste.el. Bethlehem Steel Republic Steel u. S. Steel , Price 1953 Earn. 1953 Div. 62 1/4 13.30 4.00 51 7/8 925 4.50 45 7/8 7.56 3.00 indicated rate. Yield 6.1 8.6 6.5 It will be noted that, based on 1953 earnings, the dividend payout was small on all three issues. Of course, earnings are expected to be somewhat lower in 1954. The only company to report so far has been Republic Steel – which showed -earningsof 1.79 -for the first' quarter of 1954 as compare-d with 2.24 for the same period of last year. This is a drop of 20. Even if this pattern continues for the balance of the year, present dividends would be covered at least twice by two of the above companies. U. S. Steel will announce first quarter earnings on Tuesday, April 27th, and Bethlehem Steel on Thursday, April 29th. From a technical point of view, all three issues have been showing increasing relative strength. Bethlehem Steel and Republic have already broken out of trading ranges and U. S. Steel is close to doing so. In all three oases, downside support is not too far away from present levels. All three issues appear to be attractive purchases for long term appreciation. EDMUND W. TABELL WALSTON & CO. ih,s memorandum IS n().\ \0 be COI\\!rl,Led a\ an offer or solici.tation of offers to u oormse 11mtn!asel'uhnats'eSbeenFropmretpiamreed10blomues IWloSalIlso tomno!o&iluCo01. omroannty\\1phaorntnoenr'he11eolIS mOlt h.svc dn .nter('s/ In some or dli 01 11',(, securities menltoned herein The ,Of g t gd Cufdte or f,ndl dnd IS no! Intended to lorect;)se Independent ,nqulfY bdsed upon ,nlorlT'dllo,, believed rehable but not necessaflly complete, IS not guaran ee as ac , I 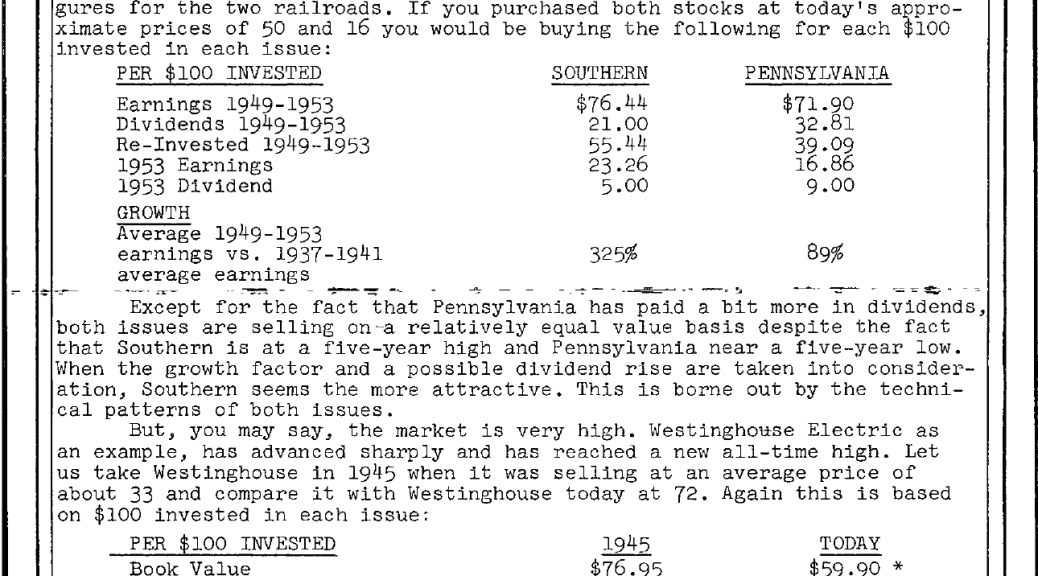 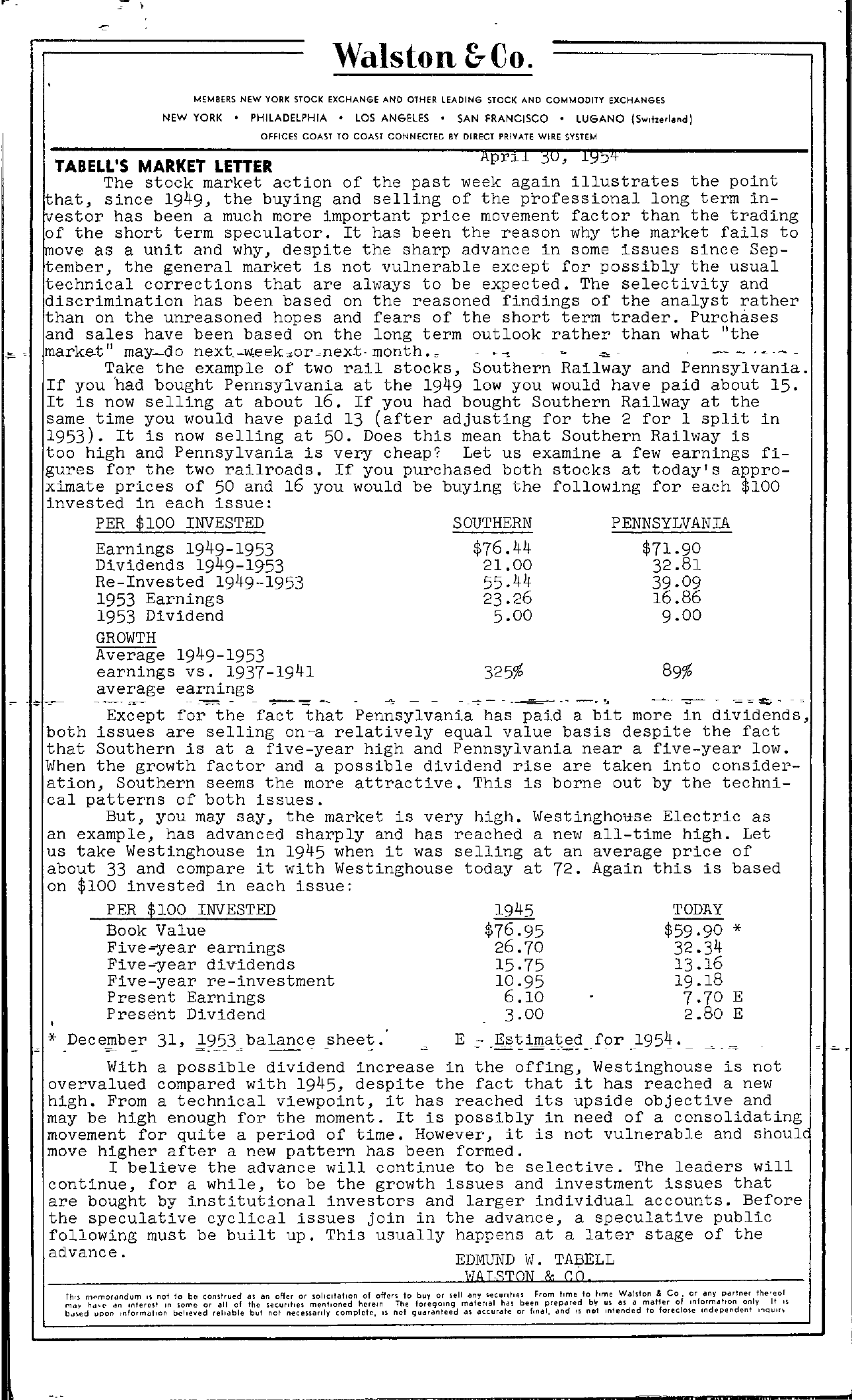