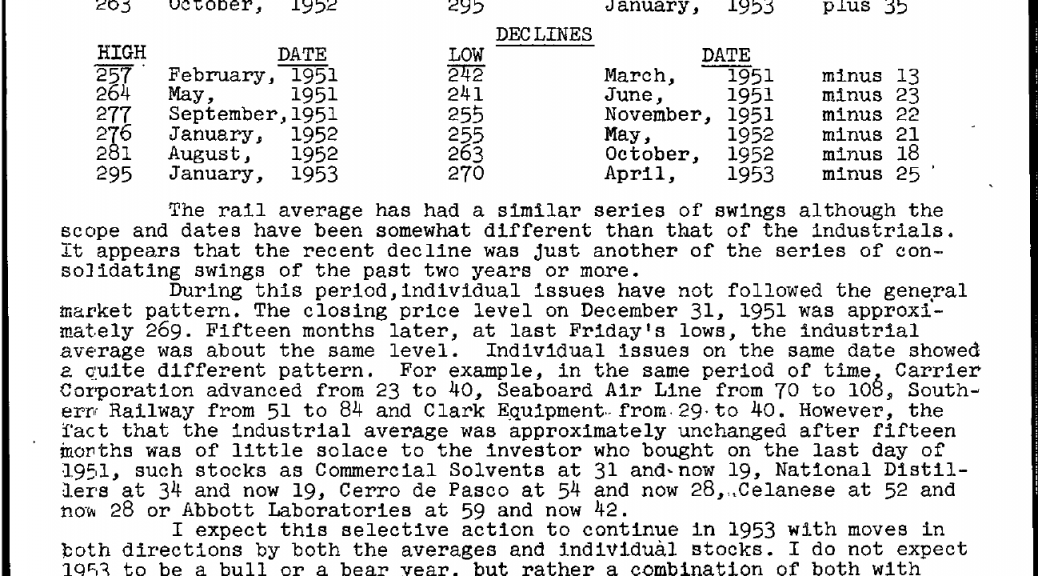 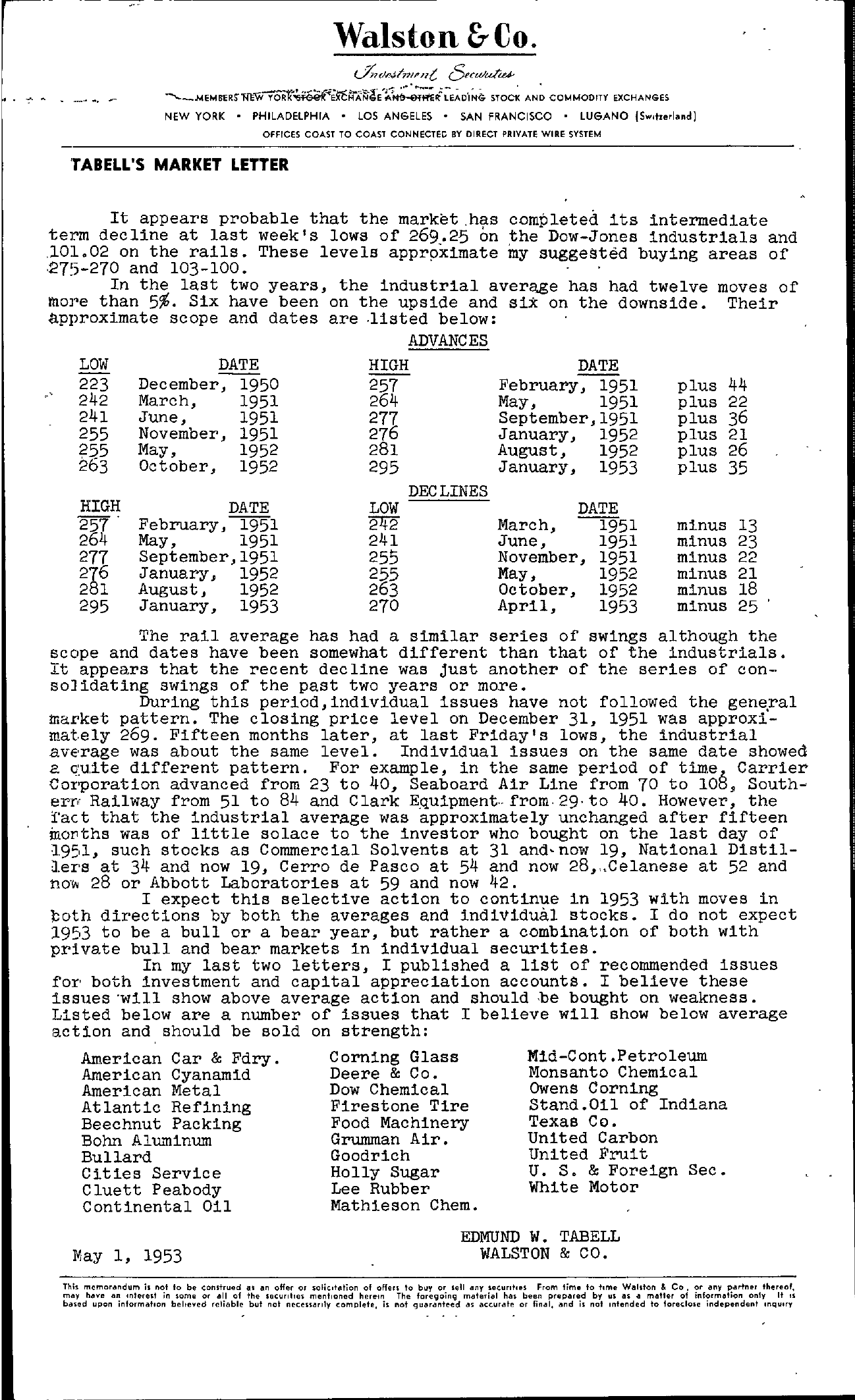 ————————– Walston &Co. .. 7(M,jIJ.J1/nt 8aulu/teJ.- ………..MEMBERS-mWYORrc..-ST6(f-iEXiMA''E..;;i,EAO'tNG SlO AN COMMODITY EXCHANGES NEW YORK PHILADELPHIA LOS ANGELES SAN FRANCISCO LUGANO (Sw …landJ OFFICES COAST TO COAST CONNECTEi BY DIRECT PRIVATE WIRE SYSTEM TABELL'S MARKET LETTER It appears probable that the market.has completed its intermediate term decline at last week's lows of 269.25 on the Dow-Jones industrials and ,101.02 on the rails. These levelS apprpximate my suggested buying areas of ,275-270 and 103-100. In the last two years, the industrial average has had twelve moves of mope than 5. Six have been on the upside and six on the downside. Their approximate scope and dates are .listed below ADVANCES LOW .. 223 242 241 255 255 263 DATE December, 1950 March, 1951 June, 1951 November, 1951 May, 1952 October, 1952 HIGH 257 264 277 276 281 295 February-D, AT1-E951 May, 1951 September, 1951 January, 1952 August, 1952 January, 1953 plus 44 plus 22 plus 36 plus 21 plus 26 plus 35 HIGH 257 . 264 277 276 281 295 DATE February, 1951 May, 1951 September, 1951 January, 1952 August, 1952 January, 1953 DECLINES LOW DATE 242 March, -r951 241 June, 1951 255 November, 1951 255 May, 1952 263 October, 1952 270 April, 1953 minus 13 m.inus 23 minus 22 minus 21 minus 18 minus 25 The rail average has had a similar series of swings although the scope and dates have been somewhat different than that of the industrials. It appears that the recent decline was just another of the series of con- soJidating swings of the past two years or more. During this period,individual issues have not followed the general market pattern. The cloSing price level on December 31, 1951 was approxi- mately 269. Fifteen months later, at last Friday's lows, the industrial ave-rage was about the same level. Individual issues on the same date showed E. quite different pattern. For example, in the same period of tim.e.z. Carrier Cororation advanced from 23 to 40, Seaboard Air Line from 70 to 100, South- error Railway from 51 to 84 and Clark Equipment.. from. 29 to 40. However, the '('act that the industrial average was approximately unchanged after fifteen moths was of little solace to the investor who bought on the last day of 19,1, such stocks as Commercial Solvents at 31 and-now 19, National DistilJers at 34 and now 19, Cerro de Pasco at 54 and now 28,,,Celanese at 52 and no'\' 28 or Abbott Laboratories at 59 and now 42. I expect this selective action to continue in 1953 with moves in both directions by both the averages and individual stocks. I do not expect 19,3 to be a bull or a bear year, but rather a combination of both with private bull and bear markets in individual securities. In my last two letters, I published a list of recommended issues for both investment and capital appreciation accountS. I believe these issues 'will show above average action and should e bought on weakness. Listed below are a number of issues that I believe will show below average action and should be sold on strength American Car & Fdry. American Cyanamid American Metal Atlantic Refining Beechnut Packing Bohn Allliinum Bullard Cities Service Cluett Peabody Continental Oil Corning Glass Deere & Co. Dow Chemical Firestone Tire Food Machinery Grumman Air. Goodrich Holly Sugar Lee Rubber Mathieson Chern. Mid-Cont.Petroleum Monsanto Chemical OwenS Corning Stand.Oil of Indiana Texas Co. United Carbon United Fruit U. S. & Foreign Sec. White Motor May 1, 1953 EDMUND W. TABELL WALSTON & CO. This memorandum is not to be construed as an offer Of olic;,ttion of offen to buy or silli lny SlIcunt,es From time to time Waldon & Co. or any pa.rtner thereof, may have an Interest in some or all of the securities mentioned herein The foregoing material has been prepared by us a5 a matter of information only It IS based upon informahon beheved reliable but not neceuarlly comDlete, is not guarClnteed as accurate or final, and is not Intended to foreclose independent Inquiry 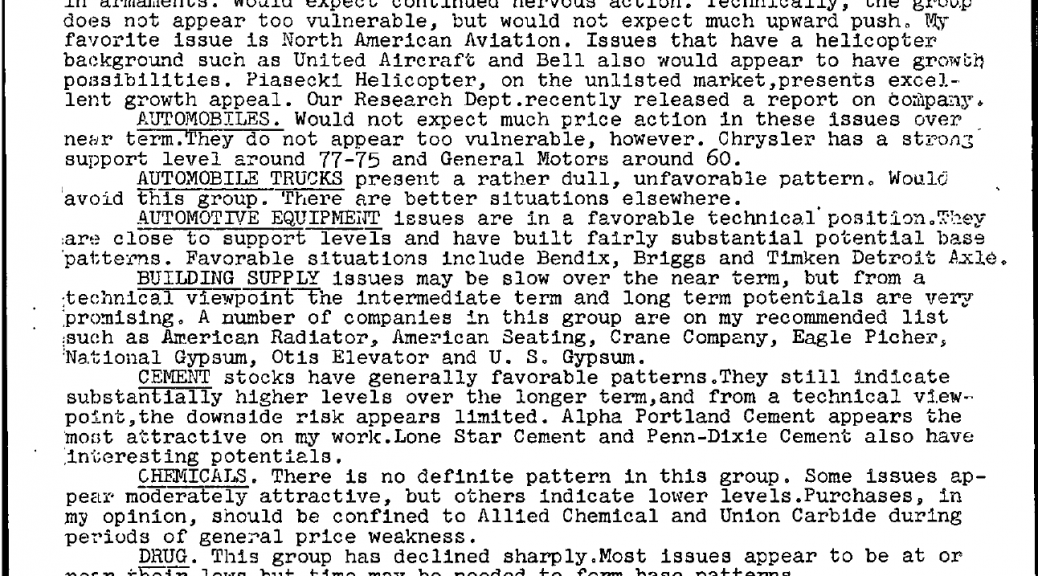 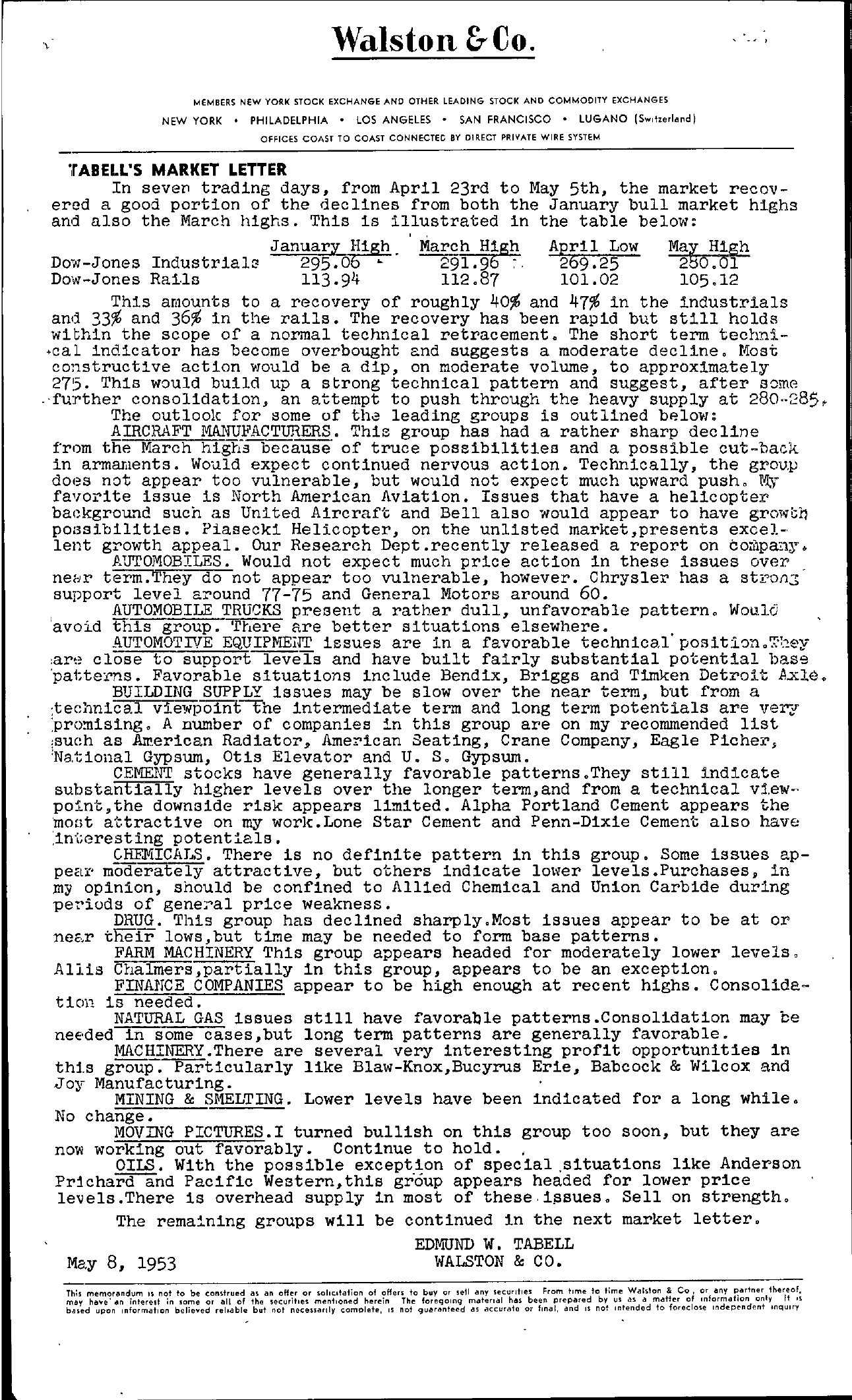 Walston &Co. J ) MEMBERS NEW YORK STOCK EXCHANGE AND OTHER LEADING STOCK AND COMMODITY EXCHANGES NEW YORK PHILADELPHIA LOS AN6ELES SAN FRANCISCO LUGANO (Sw,t,,d) OFFICES COAST TO COAST CONNECTEC. BY DIRECT PRIvATE WIRE SYSTEM UBELL'S MARKET LETTER In seven trading days, from April 23rd to May 5th, the market recovered a good portion of the declines from both the January bull market highs and also the March highs. This is illustrated in the table below January High. March High April Low Ma& High Dow-Jones IndustrialG 295.06 – 291.96 , 269,25 2 0.01 Dow-Jones Rails 113.94 112.87 101.02 105.12 This amounts to a reco'lery of roughly 40 and 47 in the industrials and 33 and 36 in the rails. The recovery has been rapid but still holds within the scope of a normal technical retracement. The short term techni.ca 1 indicator has become overbought and suggests a moderate decline. lilost constructive action would be a dip, on moderate volume, to approximately 275. This would build up a strong technical pattern and suggest, after some –further consolidation, an attempt to push through the heavy supply at 280 ..285. 'rhe outlook for some of th0 leading groups is outlined bAlow! AIRCRAFT MANUFACTURERS. This group has had a rather sharp decline from thA March higriS-because of truce possibilities and a possible cut-back in armaments. Would expect continued nervous action. Technically, the group does not appear too vulnerable, but would not expect much upward push. y favorite issue is North American Aviation. Issues that have a helicopter background such as United Aircraft and Bell also would appear to have growcn pOl3sibilities. Piasecki Helicopter, on the unlisted market ,presents exceJ.-' lent growth appeal. Our Research Dept .recently released a report on co;iipa,..;\'. AUTOMOBILES. Would not expect much price action in these issues over nel,r term. They do not appear too vulnerable, however. Chrysler has a stPOfl.3 support level around 77-75 and General Motors around 60. , AUTO.'IOBILE TRUCKS present a rather dull, unfavorable pattern. Woule 'avoid this group. 'rbere are better situations elsewhere. AUTOMOTrlE EQUIPMEIlT issues are in a favorable technical' position.,ey ar, close to support levels and have built fairly substantial potential bas9 'pa1;tecns. Favorable situations include Bendix, Briggs and Timken Detroit Axle. BUILDnG SUPPLY issues may be slow over the near term, but from a teehnica.l viewpoint-the intermediate term and long term potentials are veF pronising. A number of companies in this group are on my recommended list ,sueh as An!erican Radiator, American Seating, Crane Company, Eagle Picher, Na.tional Gypsum, Otis Elevator and U. S. Gypsum. CEMErff stocks have generally favorable patterns.They still indicate substantially higher levels over the longer term, and from a technical vj,ew pOint,the downside risk appears linited. Alpha Portland Cement appears the 'mont attractive on my work.Lone Star Cement and Penn-Dixie Cement also have Jn;0resting potentials. CHEMICAJ. There is no definite pattern in this group. Some issues appear moderately attractive, but others indicate lower levels.Purchases, in my opinion, should be conrined to Allied Chemical and Union Carbide during periods of gene;'al price weakness. DRUG. This group has declined sharply.Most issues appear to be at or neE,r their lows, but time may be needed to form base patterns. FARM MACHINERY This group appears headed for moderately lower levels. Allis Chalmers,partially in this group, appears to be an exception. FINANCE COMPANIES appear to be high enough at recent highs. Consolidation is needed. NATURAL GAS issues still have favorable patterns.Consolidation may be needed in some cases,but long term patterns are generally favorable. MACHINERY.There are several very interesting profit opportunities in thts group. Particularly like Blaw-Knox,Bucyrus Erie, Babcock & Wilcox and Joy Manufacturing. MINING & SffiLTING. Lower levels have been indicated for a long while. No change. MOVING PICTURES.I turned bullish on this group too soon, but they are now working out favorably. Continue to hold. . OILS. With the possible exception of special.situations like Anderson Prichard and Pacific Western, this group appears headed for lower price levels.There is overhead supply in most of these ,issues. Sellon strength. The remaining groups will be continued in the next market letter. May 8, 1953 EDMUND W. TABELL WALSTON & CO. This memorandum 15 not to be construed as an oHer or solu.tation of offers to buy or sell any SeCUrities From ',me to time Walston & Co, or any artner thereof, may have' an interest in some or all of the securities mentioned herein The foregOing molteno'll has been prepared by uS as a m!ltier of mformatwn only It.s bued upon ,nformation believed reliable but not necessarily comolete, 15 not 9Uol'ranleed as ..(curate or final, and IS not Intendl)d to foreclose Independent inquiry 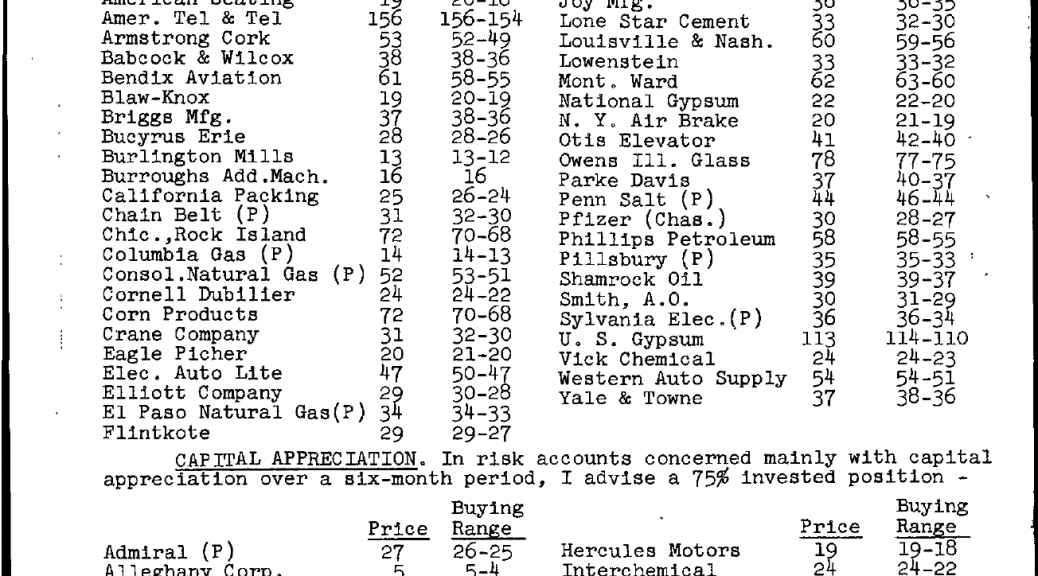 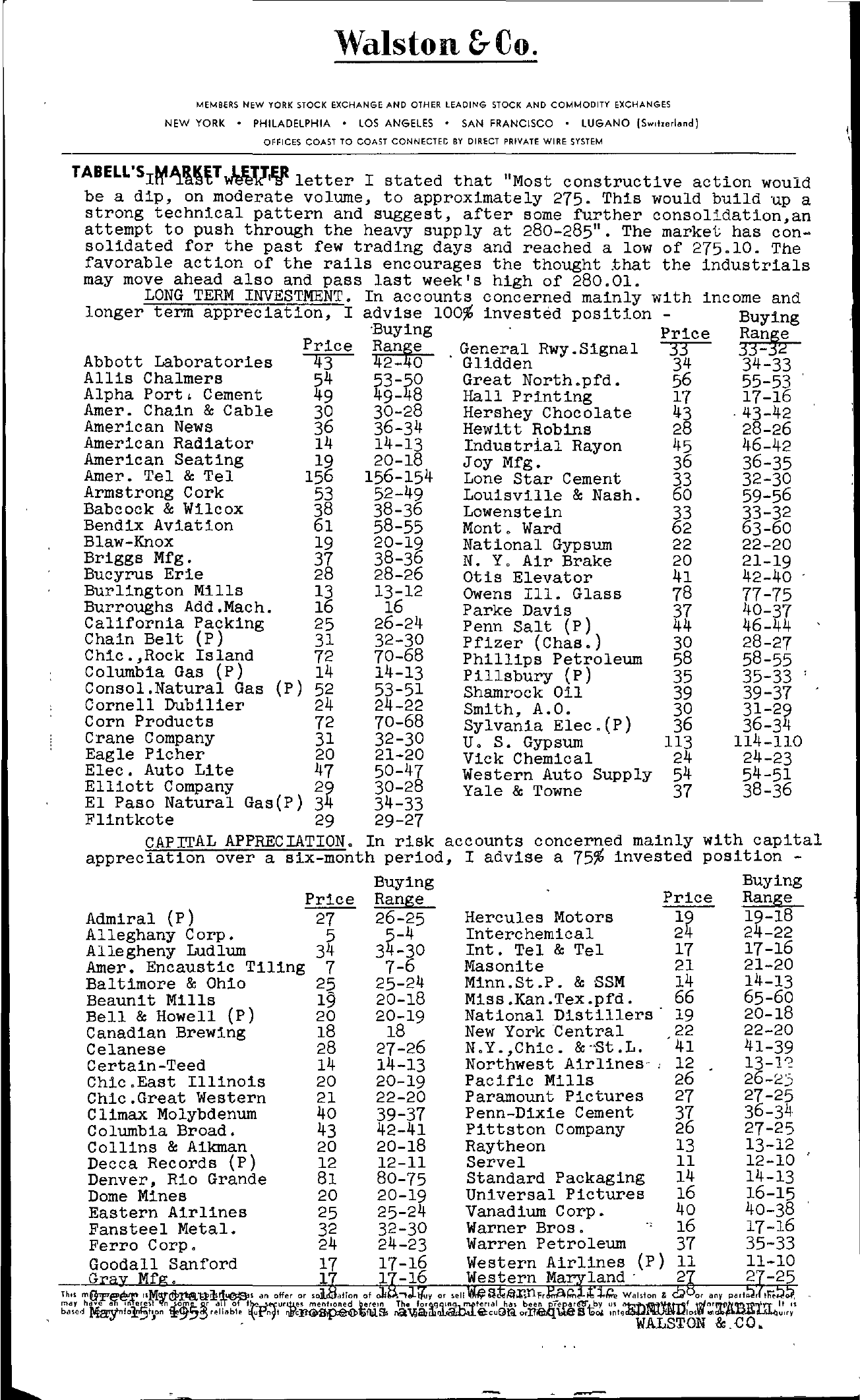 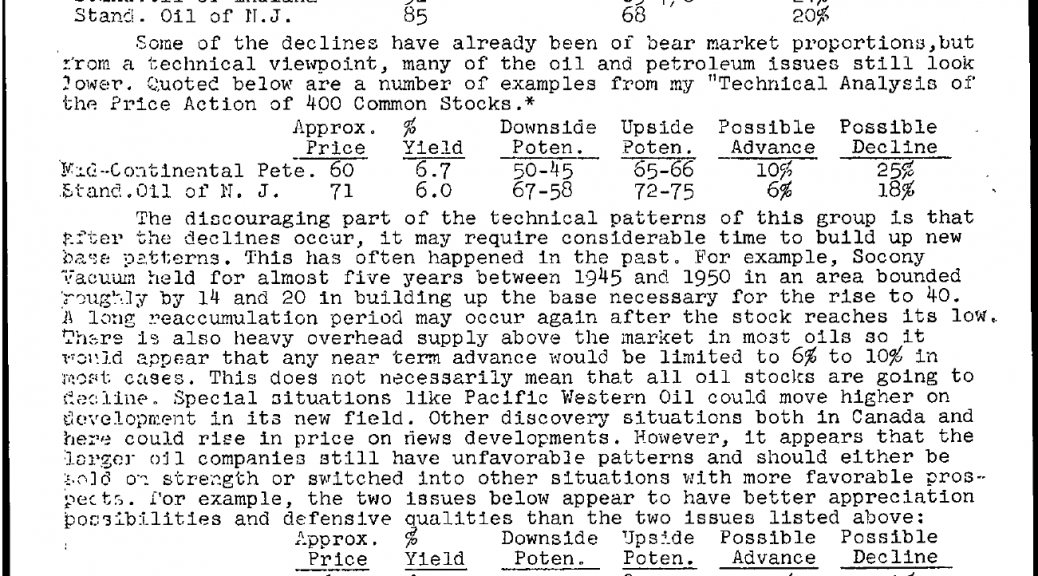 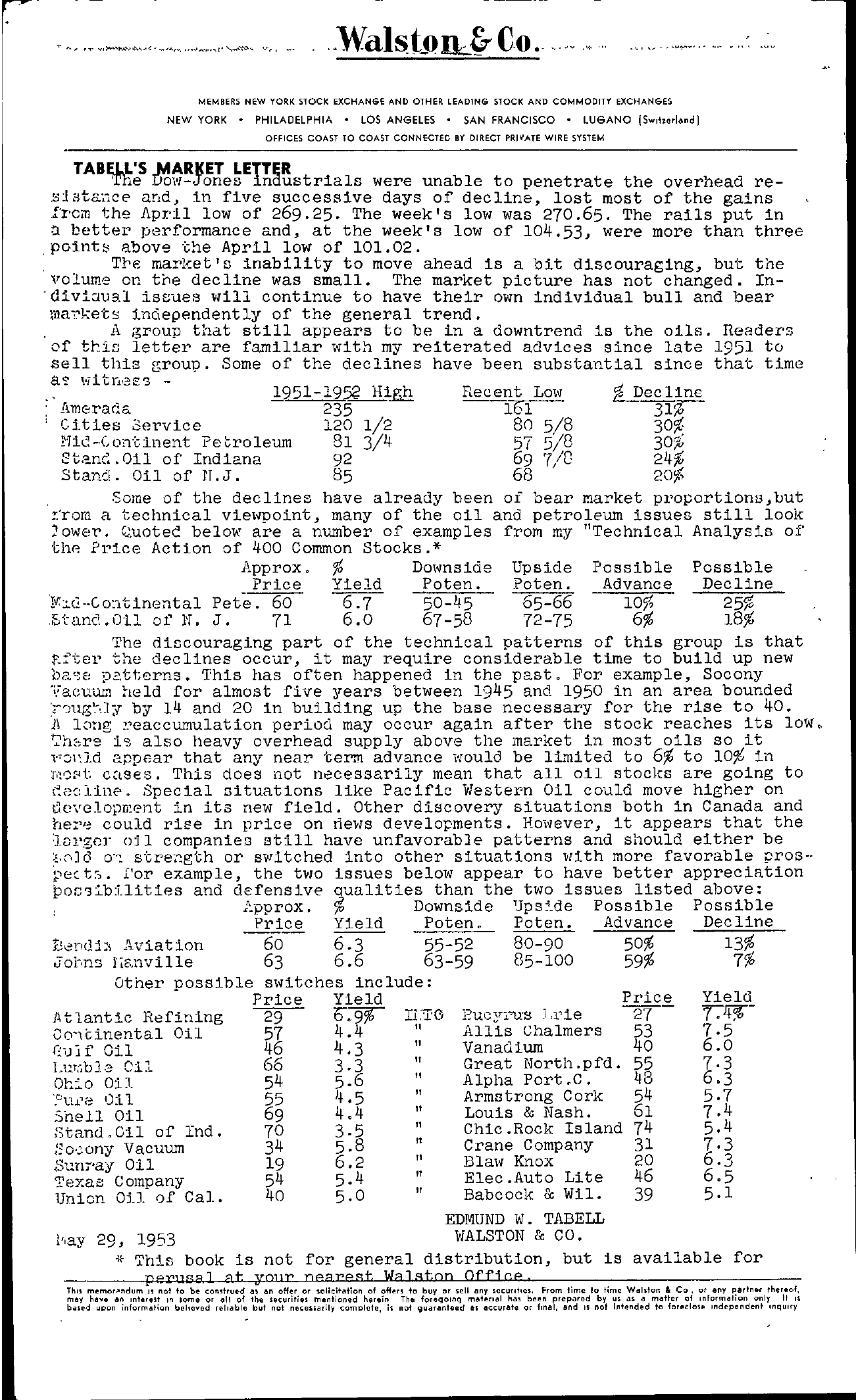