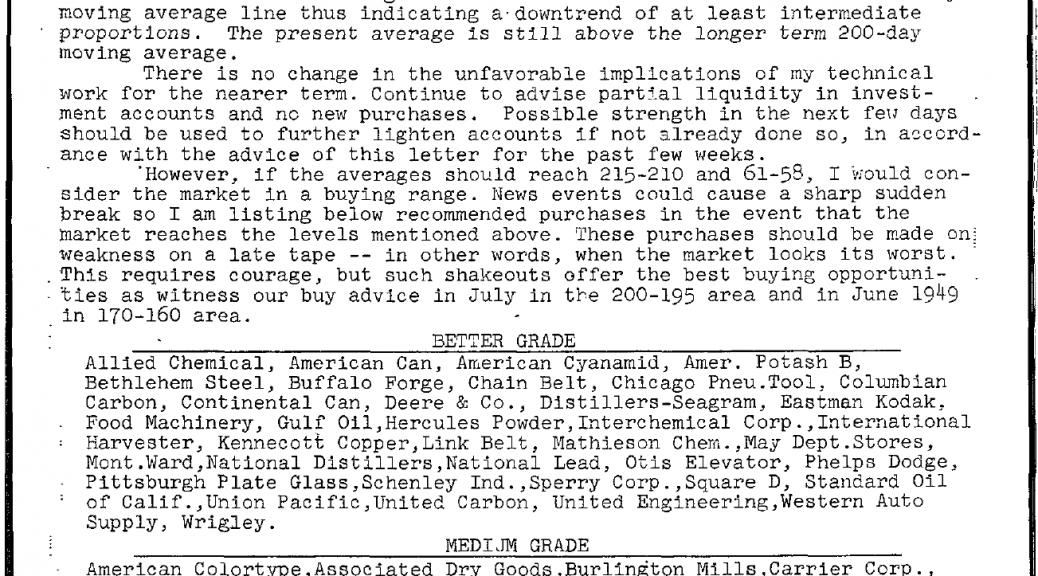 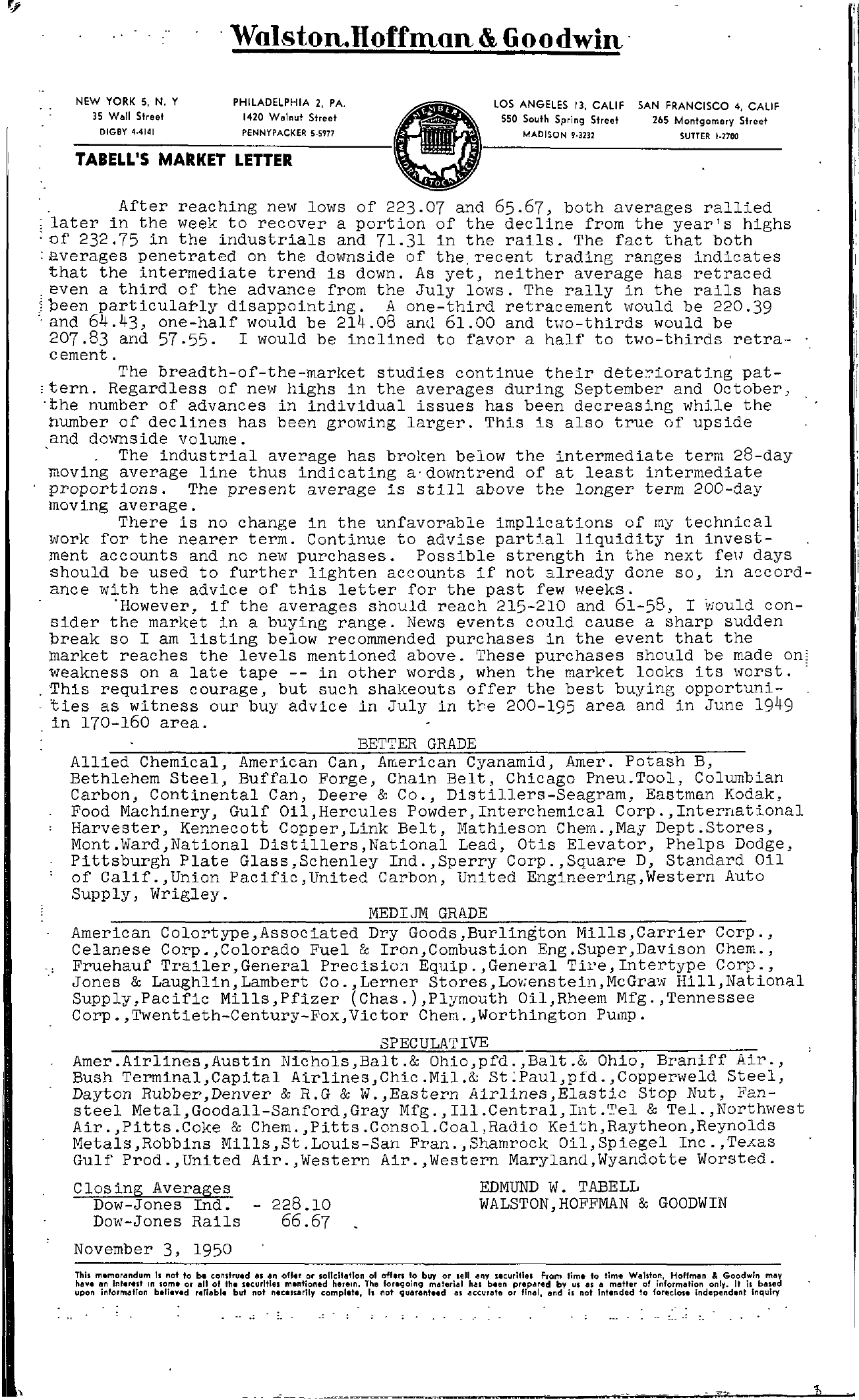 . Walston.Hoffman &. Goodwin' NEW YORK 5, N. Y 35 Wall Street DIGBY 4.4141 PHILADELPHIA 2, PA. 1420 Walnut Street PENNYPACKER 5-5977 TABELL'S MARKET LETTER LOS ANGELES 13, CALIF 550 South Spring Street MADISON 93212 SAN FRANCISCO 4, CALIF 265 Montgomery Street SUTTER 1-1700 . After reaching new lows of 223.07 and 65.67, both averages rallied ; later in the week to recover a portion of the decline from the year's highs 'of 232.75 in the industrials and 71.31 in the rails. The fact that both averages penetrated on the downside of the. recent trading ranges indicates that the intermediate trend is down. As yet, neither average has retraced even a third of the advance from the July lows. The rally in the rails has been particularly disappointing. A one-third retracement would be 220.39 '. and 64.43, one-half would be 214.08 and. 61.00 and tllO-thirds would be 207.83 and 57.55. I would be inclined to favor a half to tHo-thirds retracement. The breadth-of-the-market studies continue their deteiorating pattern. Regardless of new highs in the averages during September and October, the number of advances in individual issues has been decreasing while the number of declines has been growing larger. This is also true of upside and downside volume. , The industrial average has broken belm, the intermediate term 28-day moving average line thus indicating a'downtrend of at least intermediate proportions. The present average is still above the longer term 200-day moving average. There is no change in the unfavorable implications of my technical work for the nearer term. Continue to advise partlal liquidity in investment accounts and no new purchases. POSSible strength in the next fell days should be used to further lighten accounts if not already done so, in acord ance with the advice of this letter for the past few weeks. 'However, if the averages should reach 215-210 and 61-58, I ,,;ould consider the market in a buying range. News events could cause a sharp sudden break so I am listing below recommended purchases in the event that the market reaches the levels mentioned above. These purchases should be made on weakness on a late tape — in other words, when the market looks its worst. his requires courage, but such shakeouts offer the best buying opportuni- ties as witness our buy advice in July in tbe 200-195 area and in June 1949 in 170-160 area. BETTER GRADE Allied Chemical, American Can, American Cyanamid, ArneI'. Potash B, Bethlehem Steel, Buffalo Forge, Chain Belt, Chicago Pneu.Tool, Colubian Carbon, Continental Can, Deere & Co., Distillers-Seagram, Eastman Kodak, Food Machinery, Gulf Oil,Hercules Powder,Interchemical Corp.,International Harvester, Kennecott Copper,Link Belt, Mathieson Chern. ,May Dept.Stores, Mont.Ward,National Distillers,National Lead, Otis Elevator, Phelps Dodge, Pittsburgh Plate Glass,Schenley Ind. ,Sperry Corp. ,Square D, Standard Oil of Calif.,Union Pacific,United Carbon, United Engineering,Western Auto Supply, Wrigley. MEDLJM GRA.DE American Colortype,Associated Dry Goods,Burlington Mills,Carrier Corp., Celanese Corp. ,Colorado Fuel & Iron,Combustion Eng.Super,Davison Chern., Fruehauf Trailer, General Precisio'l Equip., General Tire, Intertype Corp., Jones & Laughlin,Lambert Co. ,Lerner Stores,Lov;enstein,McGraw Hill,National Supply,Pacific Mills,Pfizer (Chas.),Plymouth Oil,Rheem Mfg. ,Tennessee Corp. ,Twentieth-Century-Fox, Vic tor Chem., Worthington Pump. SPECULATIVE Amer.Airlines,Austin Nichols,Balt.& Ohio,pfd.,Balt.& OhiO, Braniff Air., Bush Terminal ,Capital Airlines, Chic .Mil.& St ;Paul, pfd., Copperweld Steel, Dayton Rubber,Denver & R.G & W.,Eastern Airlines,Elastic Stop Nut, Fansteel Metal, Goodall-Sanford, Gray Mfg., Ill.Central, Int .''el & Tel. ,Northwest Air.,Pitts.Coke & Chem.,Pitts.Consol.Coal,Radio Keith,Raytheon,Reynolds Metals,Robbins Mills,St.Louis-San Fran.,Shamrock Oil,Spiegel Inc.,TeLas Gulf Prod. ,United Air.,Western Air. ,Western Maryland,Wyandotte Worsted. Closing Averages Dow-Jones Ind. – 228.10 Dow-Jones Rails 66.67 EDMUND W. TABELL WALSTON,HOFFMAN & GOODWIN November 3, 1950 This memorandum Is not to b. construed liS an off., or solicitation 01 offers to buy or sell ,fin., securlties From time to tim'll Wo!Iilton, Hollmen & Goodwin mey hen en Int….st In 10m. or o!IlI of the securities m.ntioned henlln. The for.going material hi been prepared by us u a mo!ltter of informetlon only, It Is besed upon inforMetlon ben….ed r.llebl. but not necessarily complete, Is not querflnte.d as o!Iccurate or final, o!Ind is not Intended to foreclose Independent InqIJ!ry III' I1, I I I Ii I, i II 'I ., 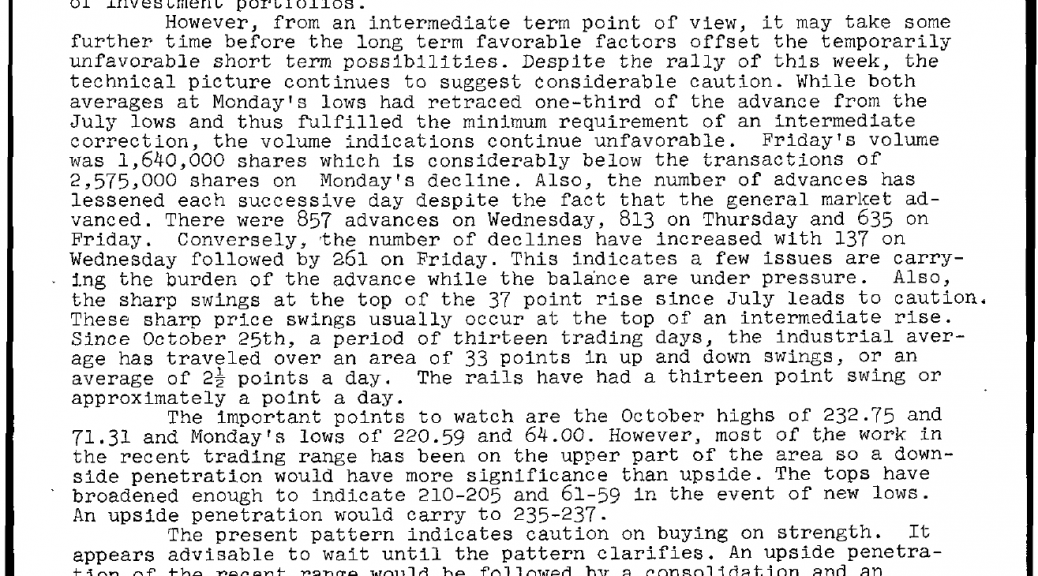 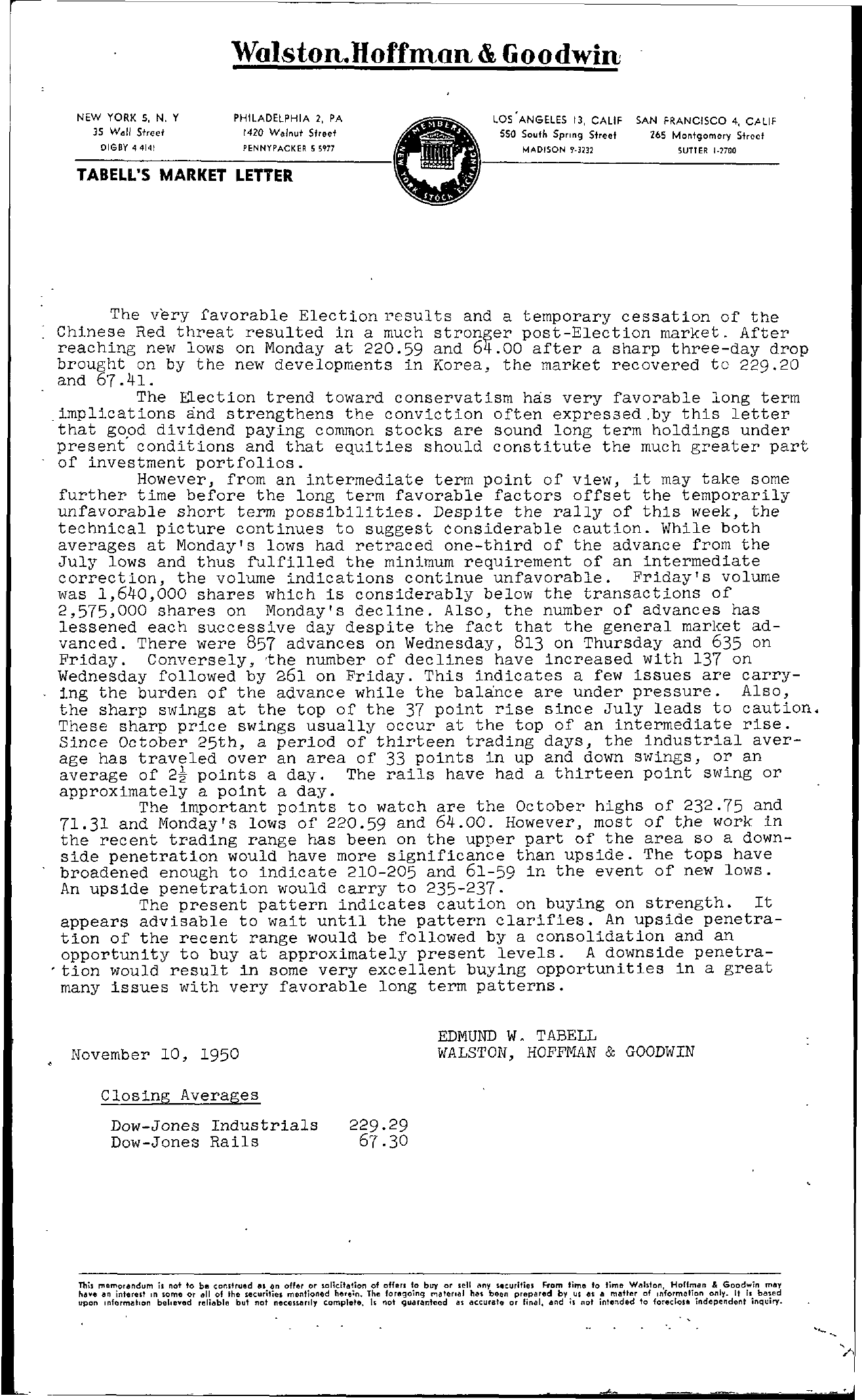 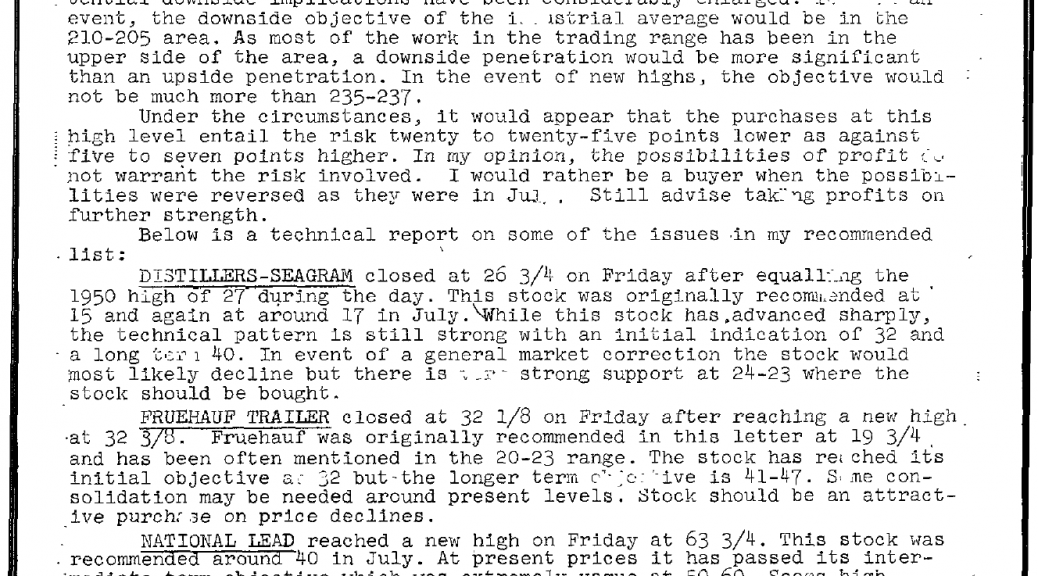 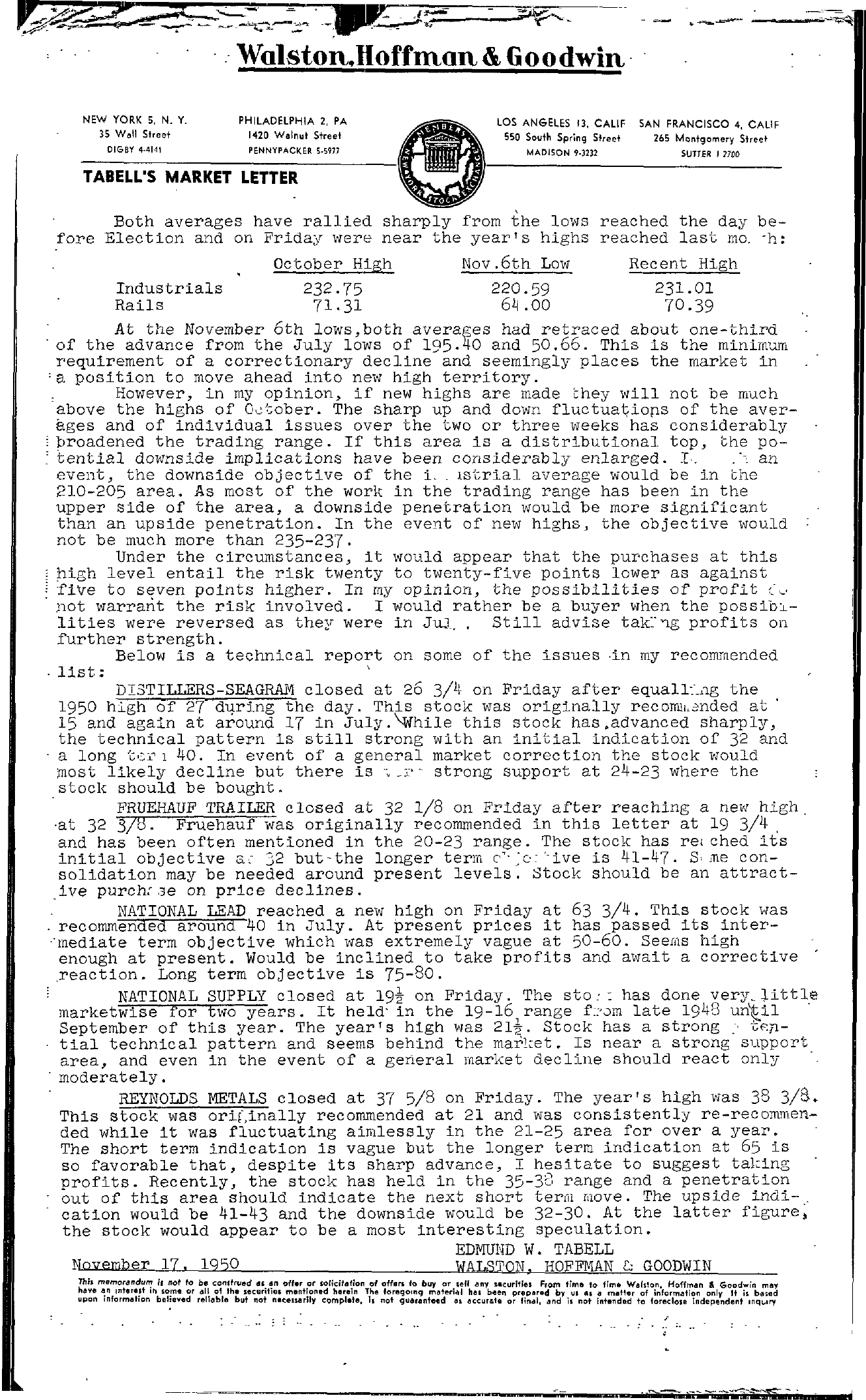 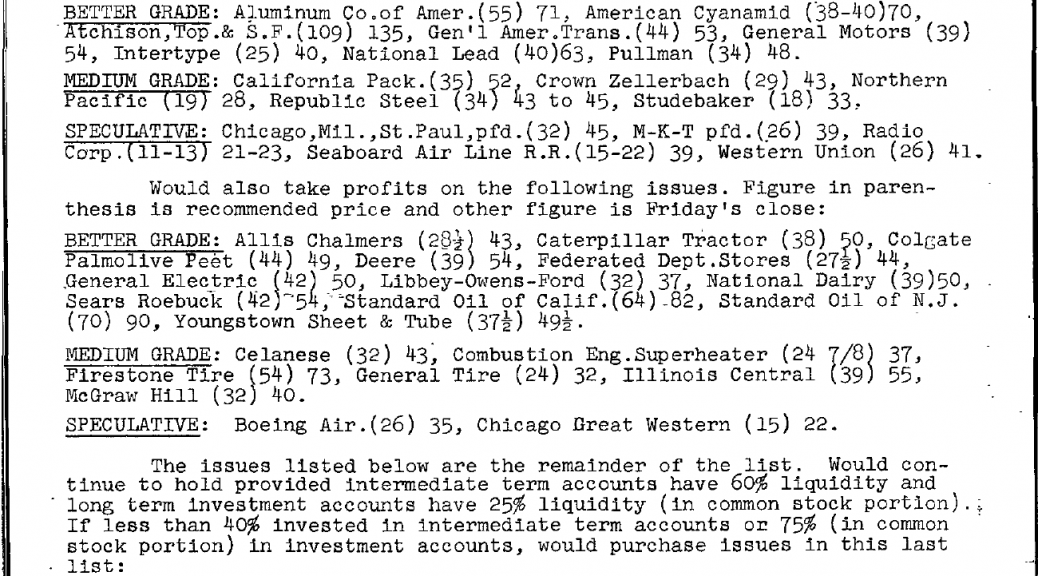 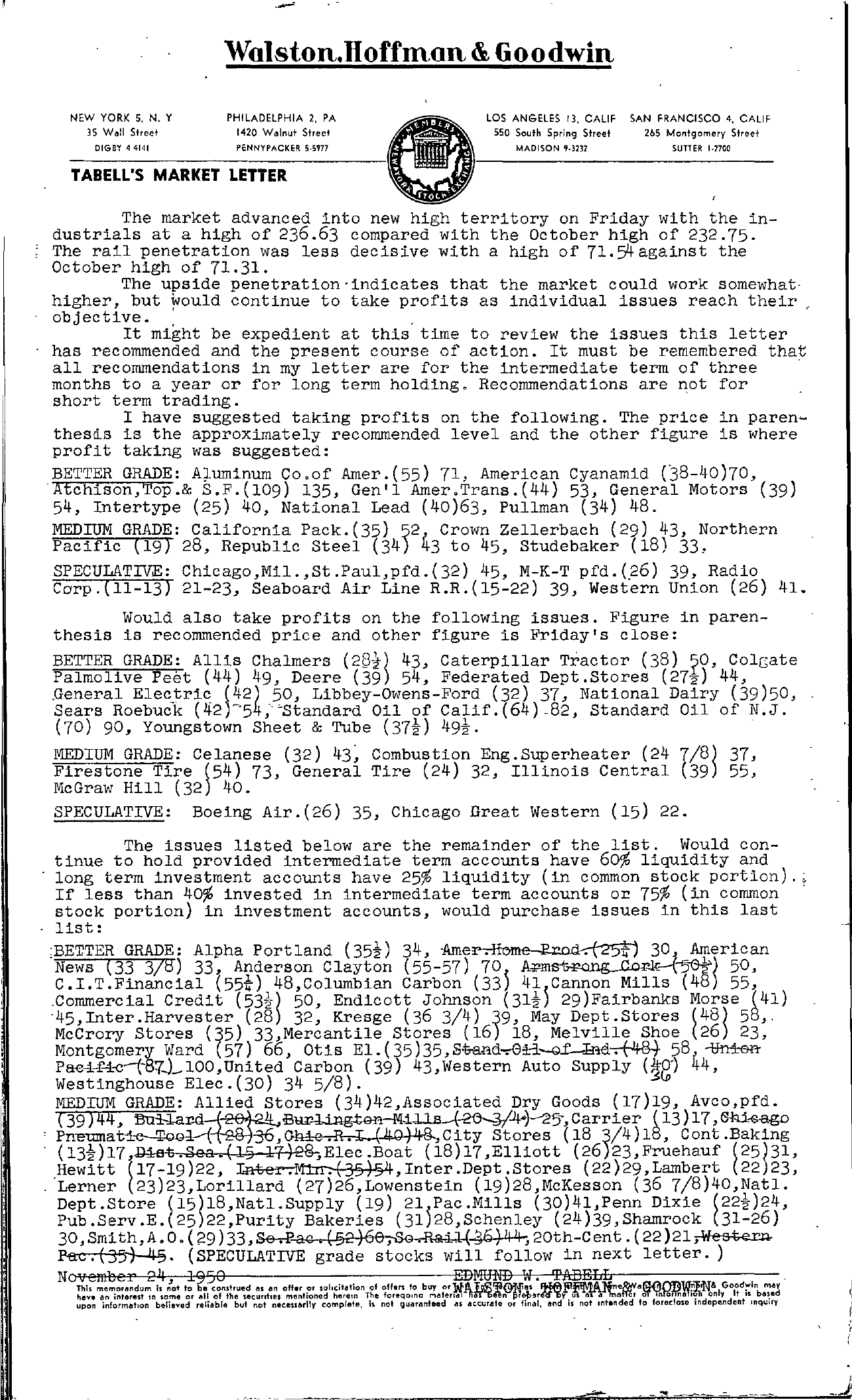