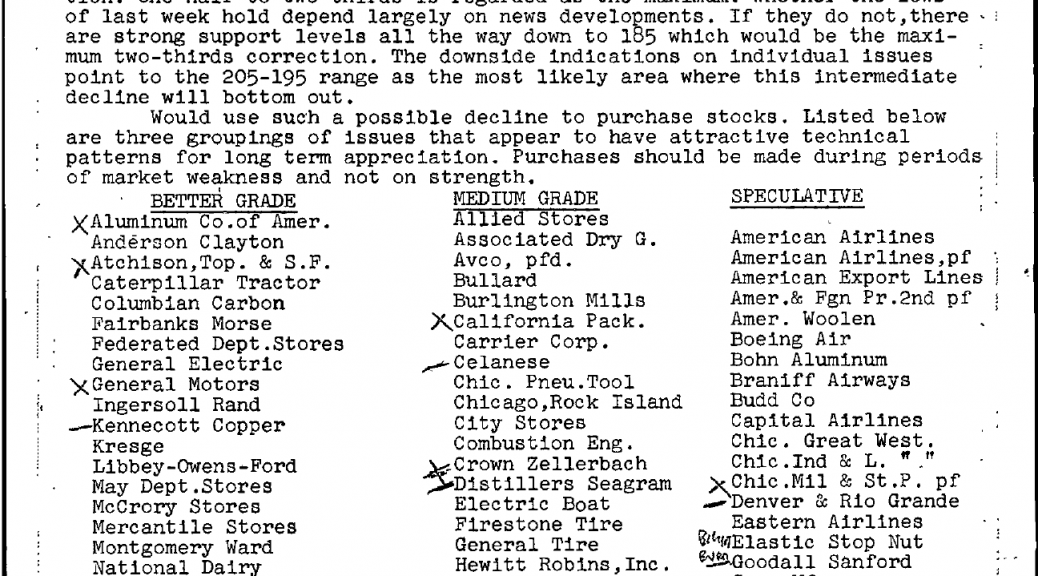 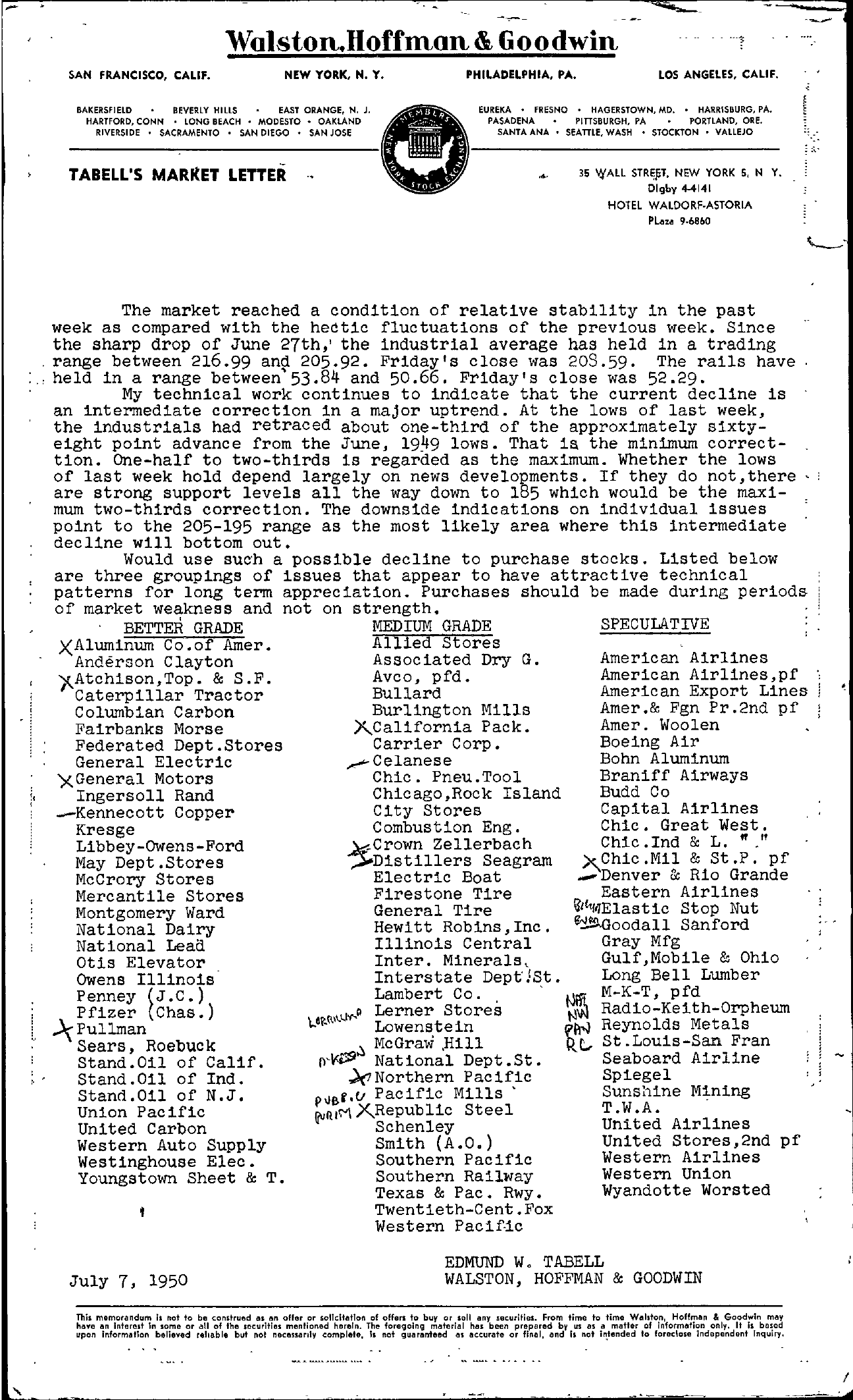 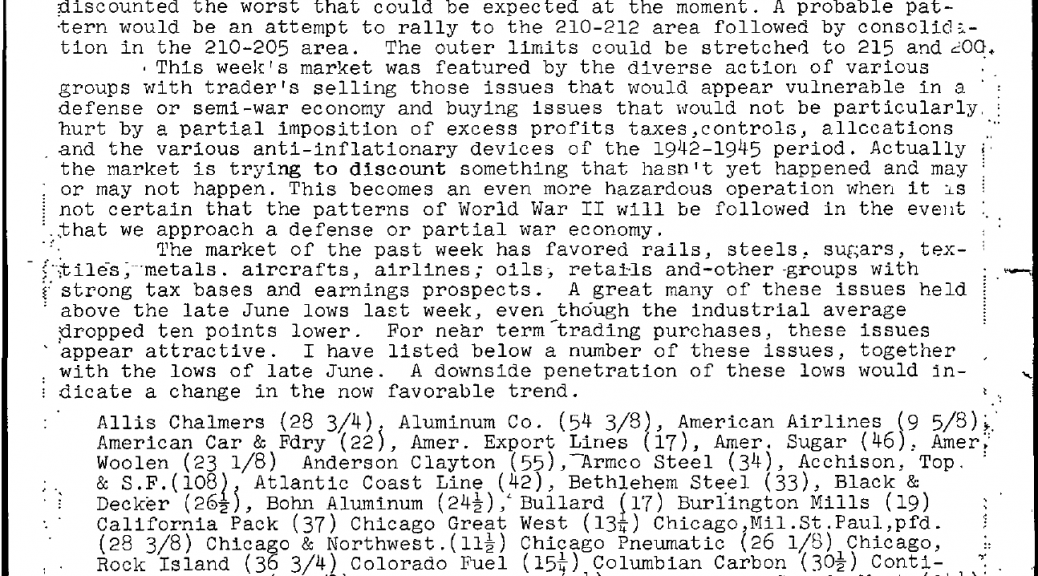 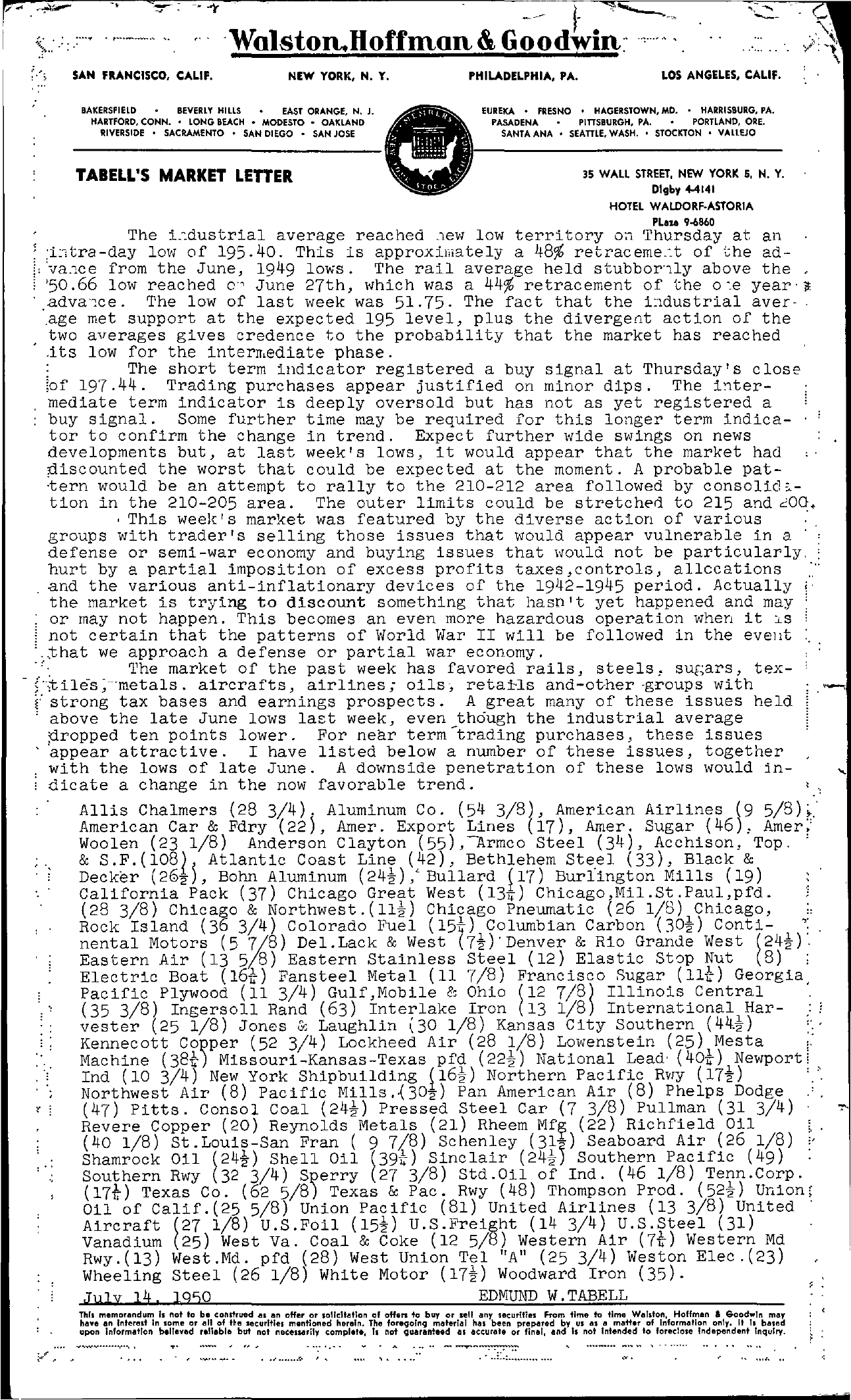 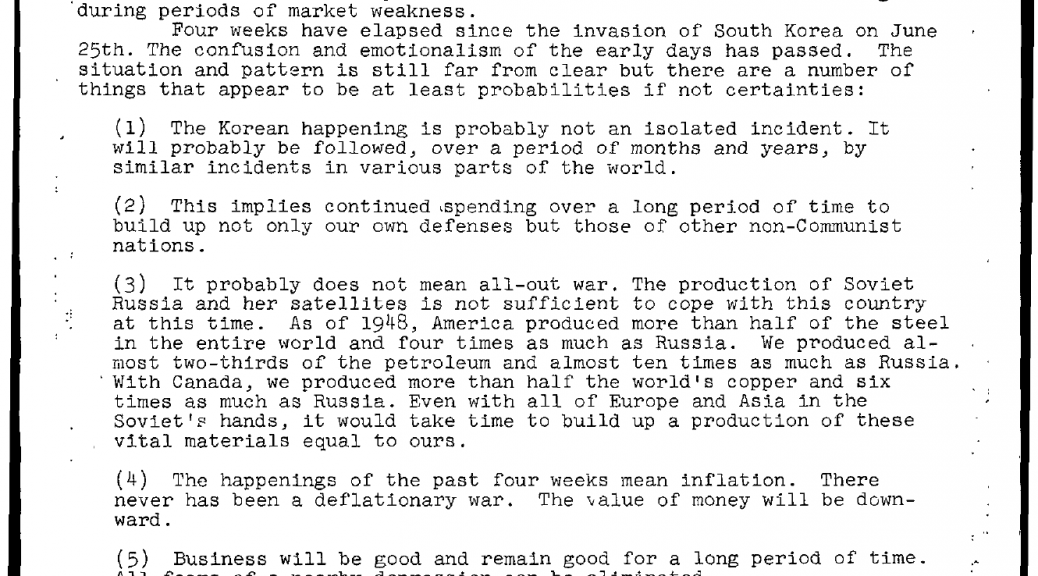 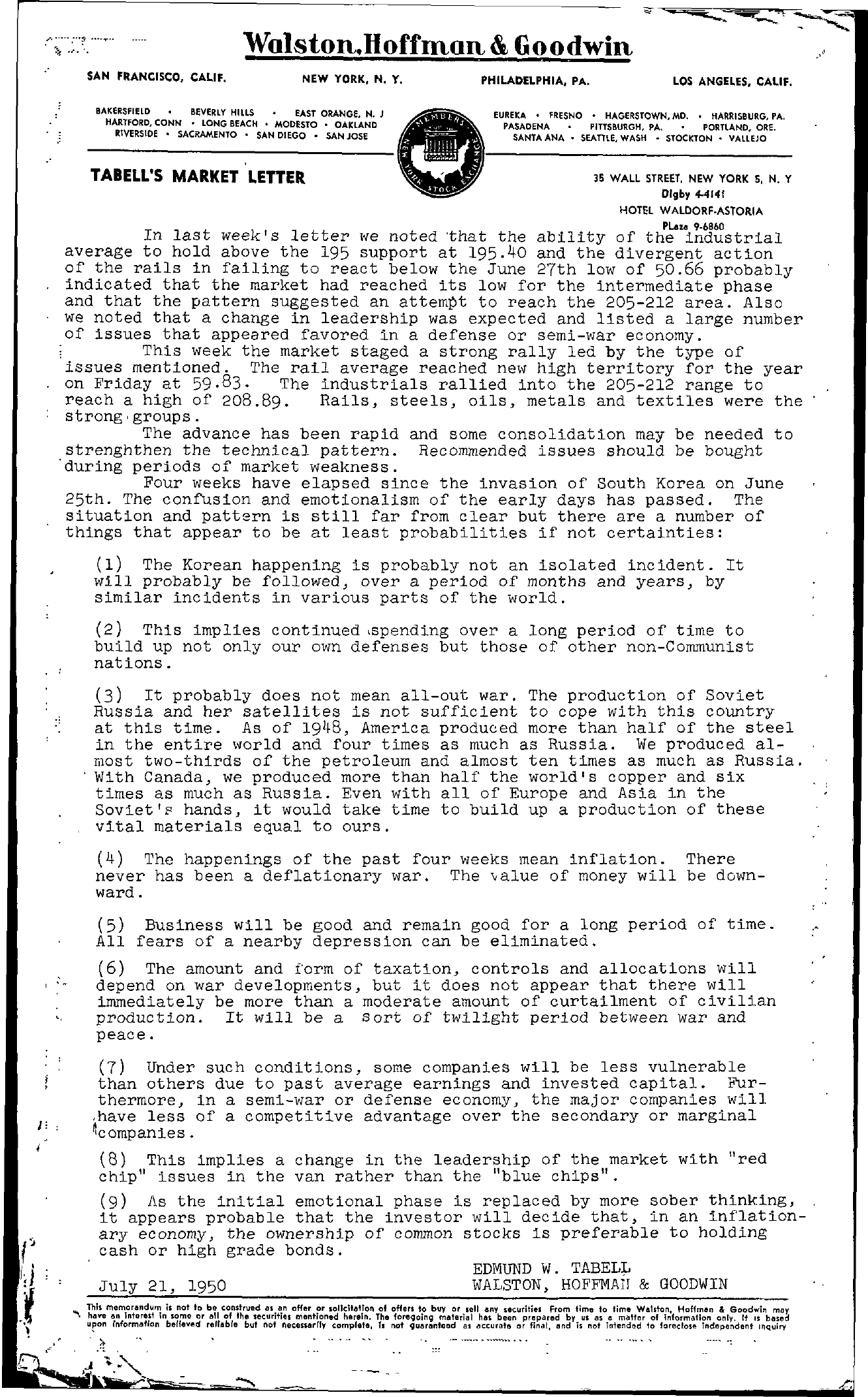 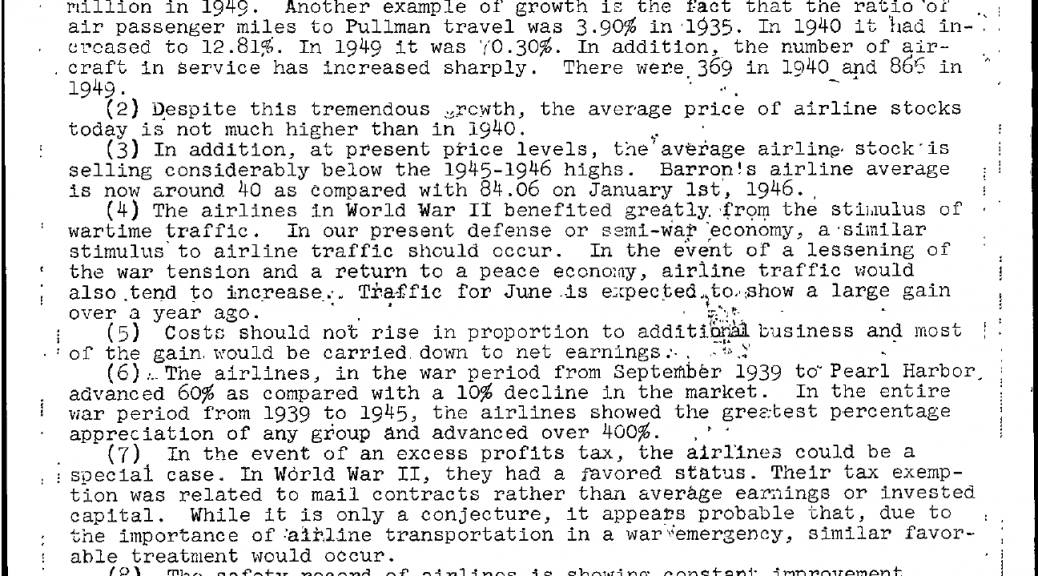 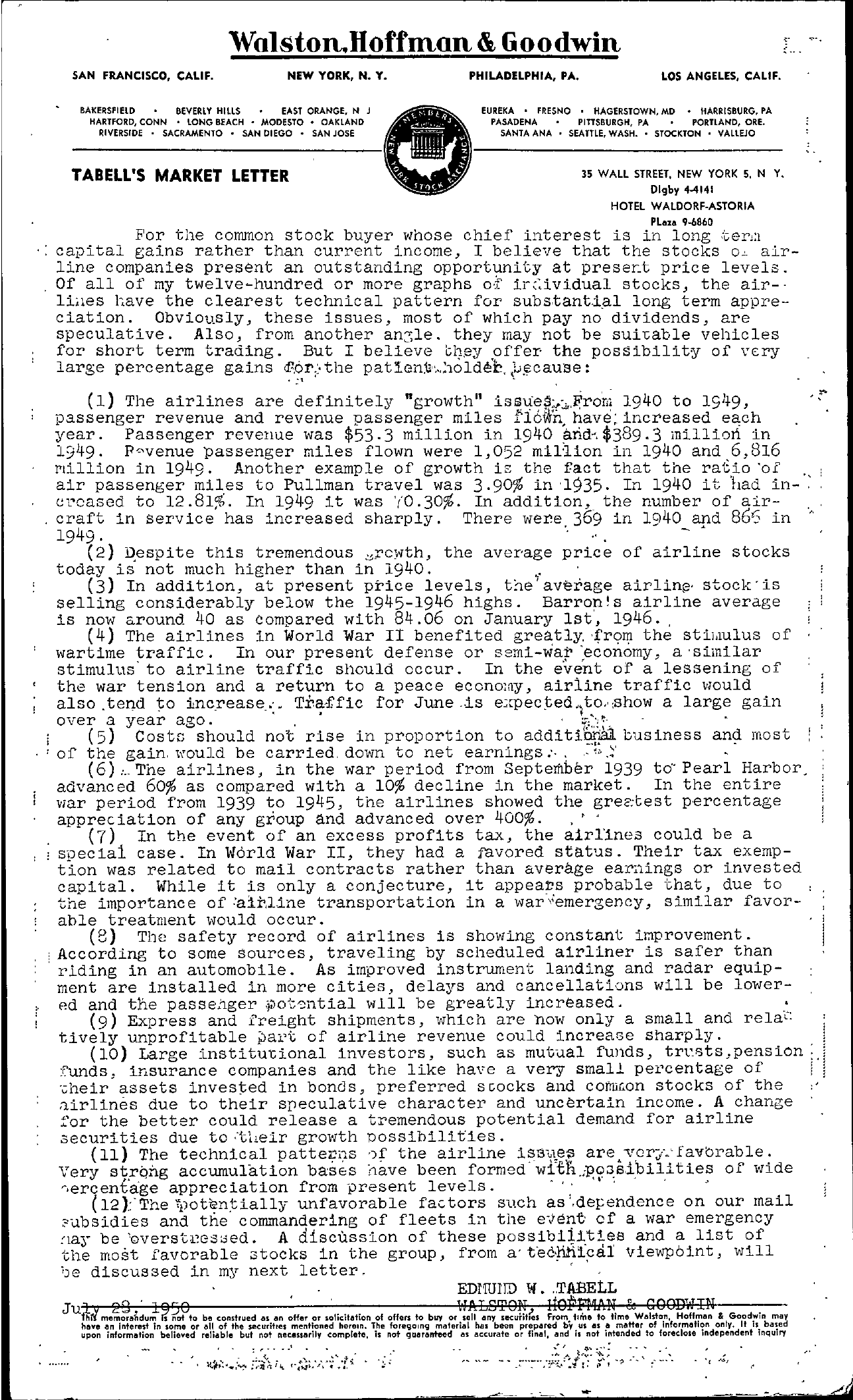 Wolston.Hoffmon &, Goodwin SAN FRANCISCO, CALIF. NEW YORK, N. Y. PHILADELPHIA, PA. ,;- ', LOS ANGELES, CALIF. BAKERSfiELD BEVERLY HillS EAST ORANGE, N J HARTFORD, CONN LONG BEACH MODESTO OAKLAND RIVERSIDE SACRAMENTO SAN DIEGO SAN JOSE EUREKA FRESNO HAGERSTOWN, MD HARRISBURG, PA PASADENA PInSBURGH, PA PORTLAND, ORE. SANTA ANA SEATTLE, WASH STOCKTON VALLEJO TABELL'S MARKET LETTER 35 WALL STREET, NEW YORK 5, N Y. Digby 4-4141 HOTEL WALDORFASTORIA Pllllr.a 9006860 For the common stock buyer whose chief interest is in long ,'cen! capital gains rather than current income, I believe that the stocks o air- line companies present an outstanding opportunity at preset price levels. Of all of my twelve-hundred or more graphs o,r ir;ividual stocks, the air- ILles have the clearest technical pattern for subs.tant.i.al long term appre- ciation. Obviously, these issues, most of which pay no diVidends, are speculative. Also, from another an31e. they may not be suiCable vehicles for short term trading. But I believe i;l,ey .ffer the possibility of vf.ry large percentage gains cr,at'; the patlan!J'c,;'lOldei', ,L.f.cause ,1 . (1) The airlines are definitely growth issues;,…Fron; lQ40 to 19)9, passenger revenue and revenue passenger miles fi6Wnhave;icreased each year. Pas senger revenue was 53.3 million in 1940 arid, 389 .3 millioli. in 1949. Fvenue passenger miles flown were 1,052 million in 1940 and 6,816 .;- 1'1111ion in 1949. Another example of growth io; the fact that the ra'cio 'of , air passenger miles to Pullman travel was 3.90 in '1935. In 1940 it had in- Gl'oased to 12.81. In 1949 it was '(0.30. In addition, the number of air- craft in service has increased sharply. There wer.e 369 in lc,40 and 8b'5 in 1949 .. – . (2) espite this tremendous ,rcwth, the average price of airline stocks today is not much higher than in 1940. ,.' (3) In addition, at present price levels, te' average airlin, stock'is selling considerably below the 1945-1946 highs. Barron!s airline average is now o.rouncl. 40 as compared with 84.06 on January 1st', 1946. , (4) The airlines in World War II benefited greatly, .from the stii,lUlus of wartime traffic. In our present defense or semi-war ec anomy , a' similar stimulus to airline traffic should cccur. In the event of a lessening of the war tension and a return to a peace econo;ny, airiine traffic vlOuld also .tend to imc.rease..;. T.r,'ffiC for June .is e;pected,)to,,show a large gain over a year a g o . , ' ;;.'.. , (5) Costa should not rise in proportion to additibi'iail business and most of the gain, \Quld be carried, down to net earnings,' ,';;, .' ,' (6) ,The airlines, in the war period from September 1939 to Pearl Harbor advanced 60 as compared with a 10 decline in the market. In the entire war period from 1939 to 1945, the airlines showed the gre2t;est p,ercentage appreciation of any group and advanced over 400. , . (7) In the event of an excess profits tax, the airl'inea could be a ; speciai case. In World War II, they had a favored status. Their tax exemp- tion was related to mail contracts rather th&, average earnings or invested capital. While it is only a conjecture, it appeavs probable that, due to the importance of alr.l.ine transportation in a war'emergency, similar favor- able treatment would occur. (8) The safety record of airlines is showing constant improvement. According to some sources, traveling by scheduled airliner is safer than , riding in an automobile. As improved instrument landing and radar equip- ment are installed in more cities, delays and cancellations will be lower- p.d and the passellger jvo'c,ntial will be greatly increased. . (9) Express and freight shipments, which are 'now only a small and rela', tively unprofitable ;'lal't of airline revenue could increaGe sharply. . i(10) Large institutional investors, such as mut'clal funds, trtlts ,pension. funds, insurance companies and the like have a very small percentage of fj 'cheir assets invest;ed in bonds, preferred s cocks and cotmr.on stocks of the irlines due to their speculative character and uncertain income. A change or the better could release a tremendous potential demand for airline aecurities due to tl,eir growth possibilities. (11) The technical pattern.s ')1' the airline iS31;\e are. v.cr-j',,' favorable. Very s.rQng accumUlation baStS Dave been formed Wiin.;'P,,3,sibilities of wide r,ercentage appreciation from present levels. . ,, ' . (12 );'The l)obmtially unfavorable fae tors snch as ',deendence on our mail 2ubsidies and the commandering of fleets in the e',rent' of a war emergency ,la' be 'overstles;ed. A discussion of these possibiiities and a list of the most favorable 3tocks in the group, from a' tec.hiifcal viewpoint, will ;Je discussed in my next letter, ., EDl'IDllD W. TABEtL ' C t memoradumJu h s not to be construed as an offer or solicitation of offers to buy or sell any secuHtes From Ilfn to time Walston, Hoffman & Goodwin may heye an interest in some or all of the securities mentioned hersln. The foregOing material hal been prepared by UI as a matter of informofion only. It is based upon informotion believed reliable but not necessarily complete, is not gUaronteed as accurate or final, and is not intended to foredose Independent inquiry ..'.' …..- – ;.–It., – – I – I,. – ' (-..,…'.,. …. ;, .''.f, …- – – —-