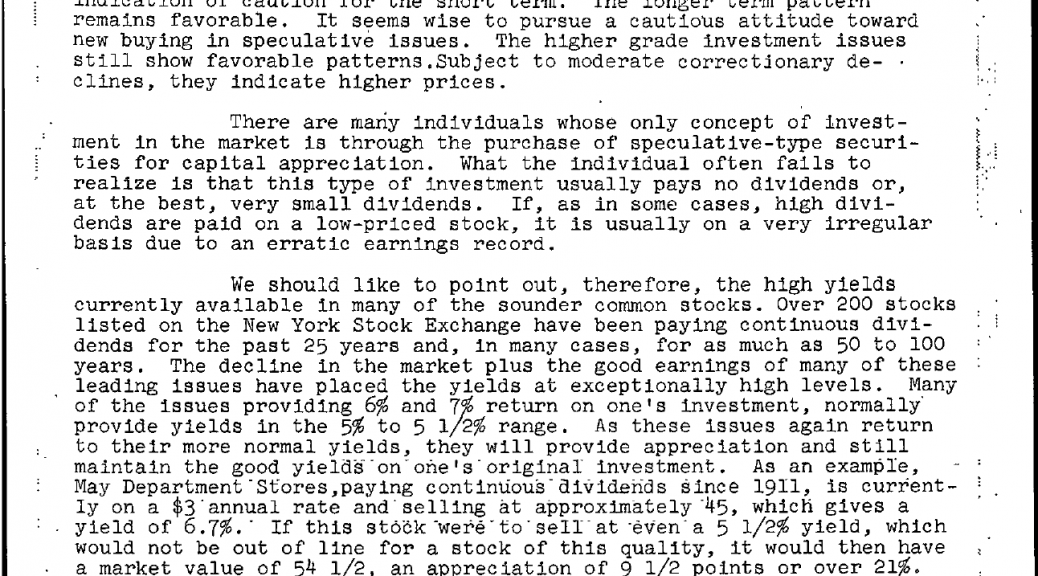 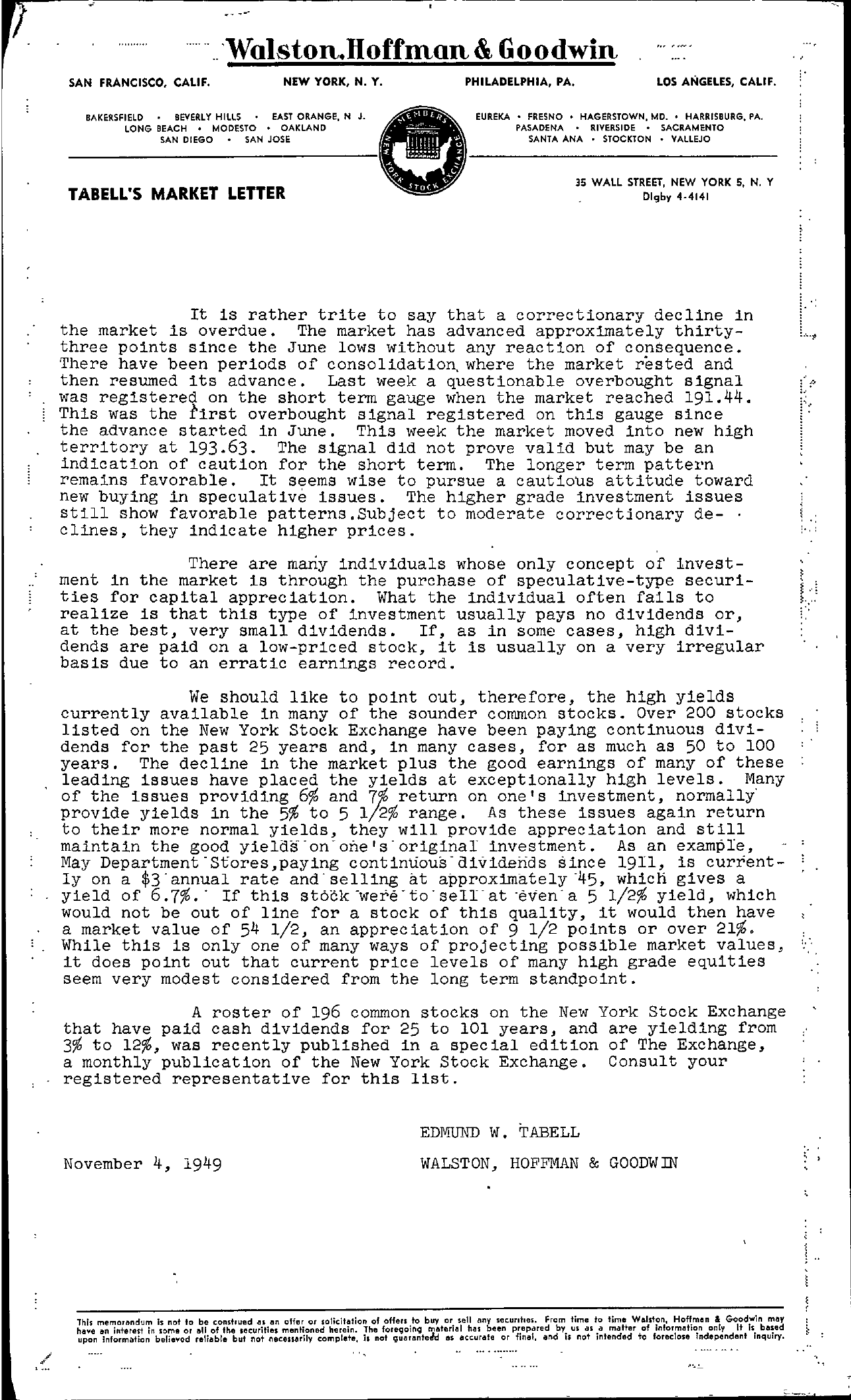 TABELL'S MARKET LETTER 35 WALL STREET, NEW YORK 5. N. Y Digby 4,4141 It is rather trite to say that a correctionary decline in the market is overdue. The market has advanced approximately thirtythree pOints Since the June lows without any reaction of consequence. There have been periods of consolidation, where the market rested and then resumed its advance. Last week a questionable overbought signal was registered on the short term gauge when the market reached 191.44. This was the first overbought signal registered on this gauge Since the advance started in June. This week the market moved into new high territory at 193.63. The signal did not prove valid but may be an indication of caution for the short term. The longer term pattern remains favorable. It seems wise to pursue a cautious attitude toward new buying in speculative issues. The higher grade investment issues still show favorable patterns.Subject to moderate correctionary de- . clines, they indicate higher prices. i ! . There are many individuals whose only concept of invest- ment in the market is through the purchase of speculative-type securi- ties for capital appreciation. What the individual often fails to realize is that this type of investment usually pays no dividends or, at the best, very small dividends. If, as in some cases, high dividends are paid on a low-priced stock, it is usually on a very irregular basis due to an erratiC earnings record. We should like to point out, therefore, the high yields currently available in many of the sounder common stocks. Over 200 stocks listed on the New York Stock Exchange have been paying continuous divi- dends for the past 25 years and, in many cases, for as much as 50 to 100 years. The decline in the market plus the good earnings of many of these leading issues have placed the yields at exceptionally high levels. Many of the issues providing 6 and 7 return on one1s investment, normally' provide yields in the 5 to 5 1/2 range. As these issues again return to their more normal yields, they will provide appreciation and still maintain the good yields'on'one1s'original investment. As an example, May Department'Stores,paying continuous'dividends Since 1911, is current- lyon a 3'annual rate and'selling at approximately '45, which gives a yield of 6.7.' If this st6ck'were'to'sellat 'even a 5 1/2 yield, which would not be out of line for a stock of this quality, it would then have a market value of 54 1/2, an appreciation of 9 1/2 points or over 21. While this is only one of many ways of projecting possible market values, it does point out that current price levels of many high grade equities seem very modest considered from the long term standpoint. A roster of 196 common stocks on the New York Stock Exchange that have paid cash dividends for 25 to 101 years, and are yielding from 3 to 12, was recently published in a special edition of he Exchange, a monthly publication of the New York Stock Exchange. Consult your registered representative for this list. November 4, 1949 EDMUND W. TABELL WALSTON, HOFFMAN & GOODWIN i i This memorandum is not to be construed .n an offer ot solicitation of offers to buy or, sell any seeurlhes. From time to time Wain, Hoffmlln & Goodwln may have an interest in some or all of the securities mentioned herein. The foregoing material has been pepared by. us as./J matter of Inlormlltion only It Is. blled upon Information believed reliable but not necessarily complete, II not gUllranteJd as accurate or final, and IS not Intended to foredose Independent InqulI'Y. 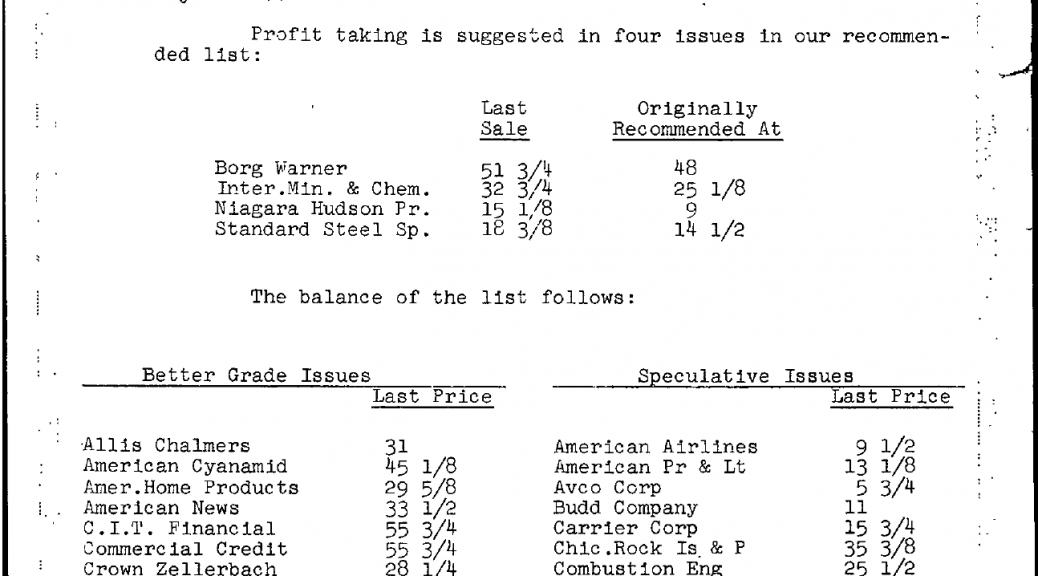 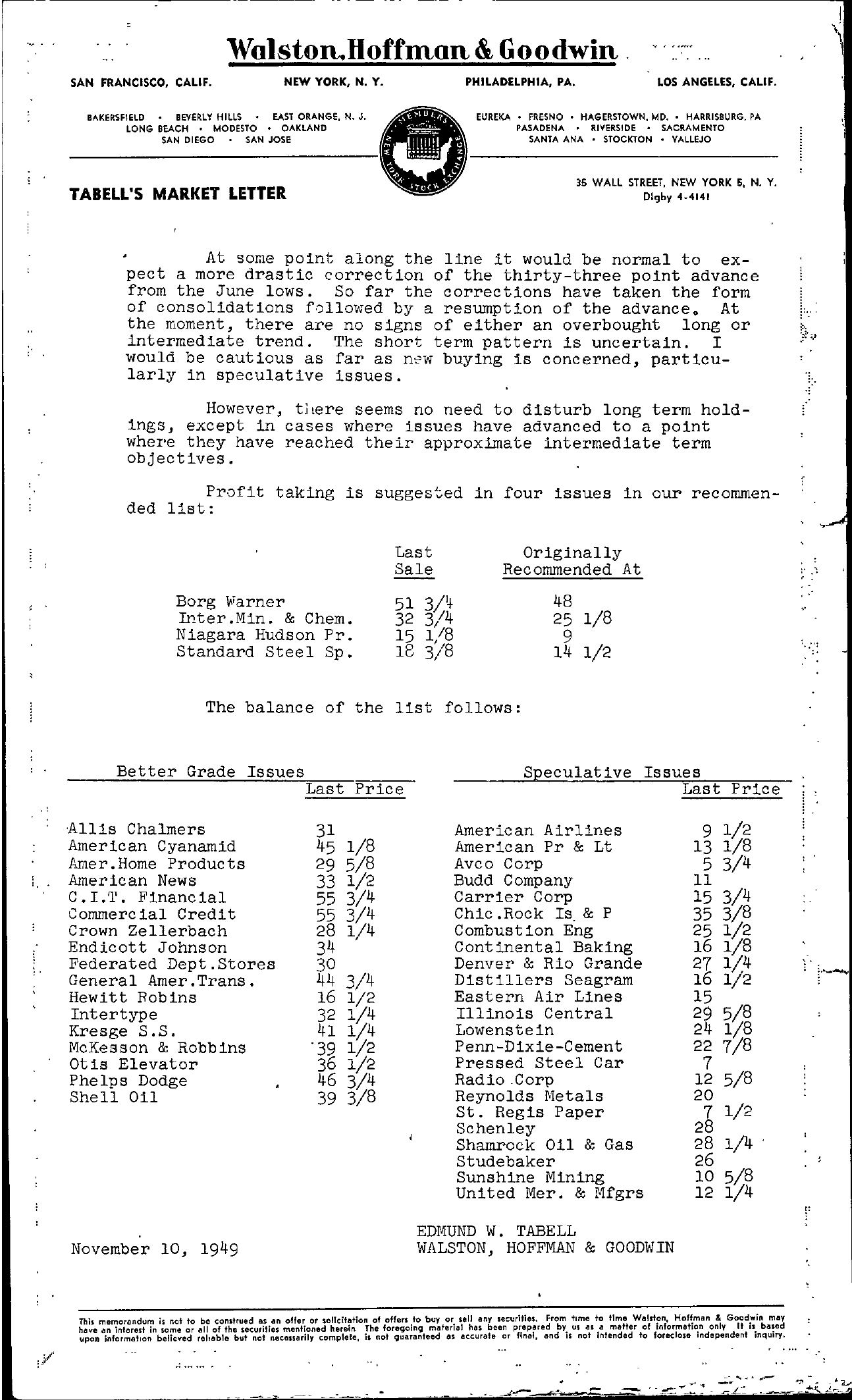 TABELL'S MARKET LETTER 35 WALL STREET. NEW YORK 5. N. Y. Digby 4-4141 At some point along the line it would be normal to expect a more drastic correction of the thirty-three point advance from the June lows. So far the corrections have taken the form of consolidations fJllowed by a resumption of the advance. At the moment, there are no signs of either an overbought long or intermediate trend. The short term pattern is uncertain. I would be cautious as far as nw buying is concerned, particularly in speculative issues. ,. However, t lere seems no need to disturb long term holdings, except in cases where issues have advanced to a point where they have reached their approximate intermediate term objectives. Profit taking is suggested in four issues in our recommended list Borg \lTarner Inter.Min. & Chern. Niagara Hudson Pro Standard Steel Sp. Last Sale 51 3/1 32 3/4 15 1/8 18 3/8 Originally Recommended At 48 25 1/8 9 14 1/2 .. The balance of the list follows Better Grade Issues Last Price -Allis Chalmers American Cyanamid Amer.Home Products American News C1. '1'. Finane ial Commercial Credit Crown Zellerbach Endicott Johnson Federated Dept.Stores General Amer.Trans. Hewitt Robins Intertype Kresge S.S. McKesson & Robbins OtiS Elevator Phelps Dodge Shell 011 31 45 1/8 29 5/8 33 1/2 55 3/4 55 3/4 28 1/4 34 30 44 3/4 16 1/2 32 1/4 41 1/4 '39 1/2 36 1/2 46 3/4 39 3/8 Speculative Issues Last Price American Airlines American Pr & Lt Avco Corp Budd Company Carrier Corp Chic .Rock Is & P Combustion Eng Continental Baking Denver & Rio Grande Distillers Seagram Eastern Air Lines Illinois Central Lowenstein Penn-Dixie-Cement Pressed Steel Car RadioCorp Reynolds letals St. Regis Paper Schenley Shamrock Oil & Gas Studebaker Sunshine Mining United Mer. & Mfgrs 9 1/2 13 1/8 5 3/4 11 15 3/4 35 3/8 25 1/2 16 1/8 27 1/4 16 1/2 15 29 5/8 24 1/8 22 7/8 7 12 5/8 20 7 1/2 28 28 1/4 26 10 5/8 12 1/4 .. November 10, 1949 EDMUND W. TABELL WALSTON, HOFFMAN & GOODWIN This memorllndum is not to b conltrued as an offer or solicitation of offers ,to buy or, sell any securities. From time to time Waist, Hofman & Good;o'iin may I'.have .'In into rest in some or all of the securities mentioned herein The foregOing matenal has been prepared by. us lIS a matter of information only It ba!ed upon information believed reliable but not necessarily complete, Is not guaranteed as accurate or final, and IS not Intended to foredose Independent mqulry. 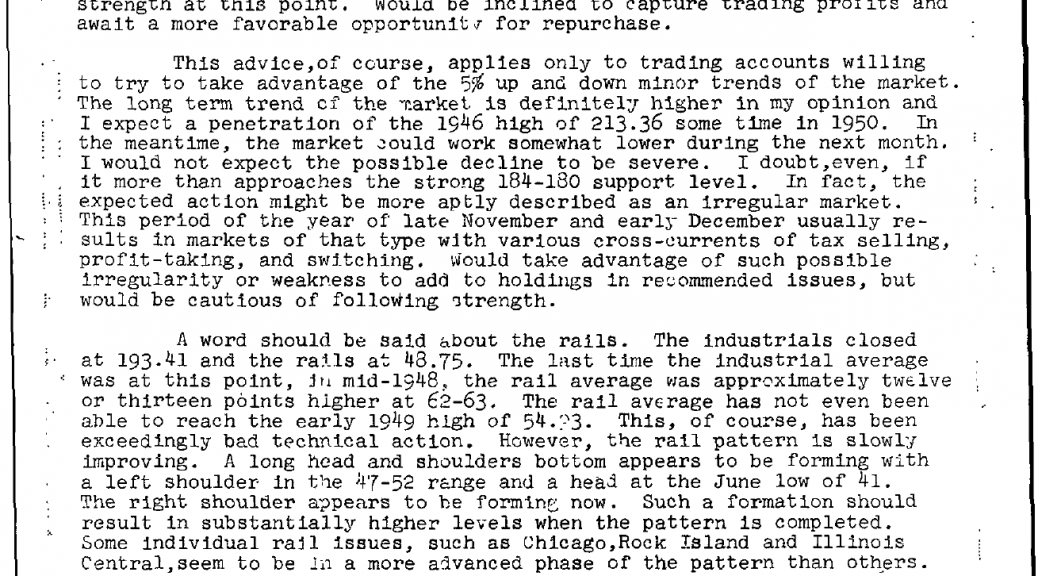 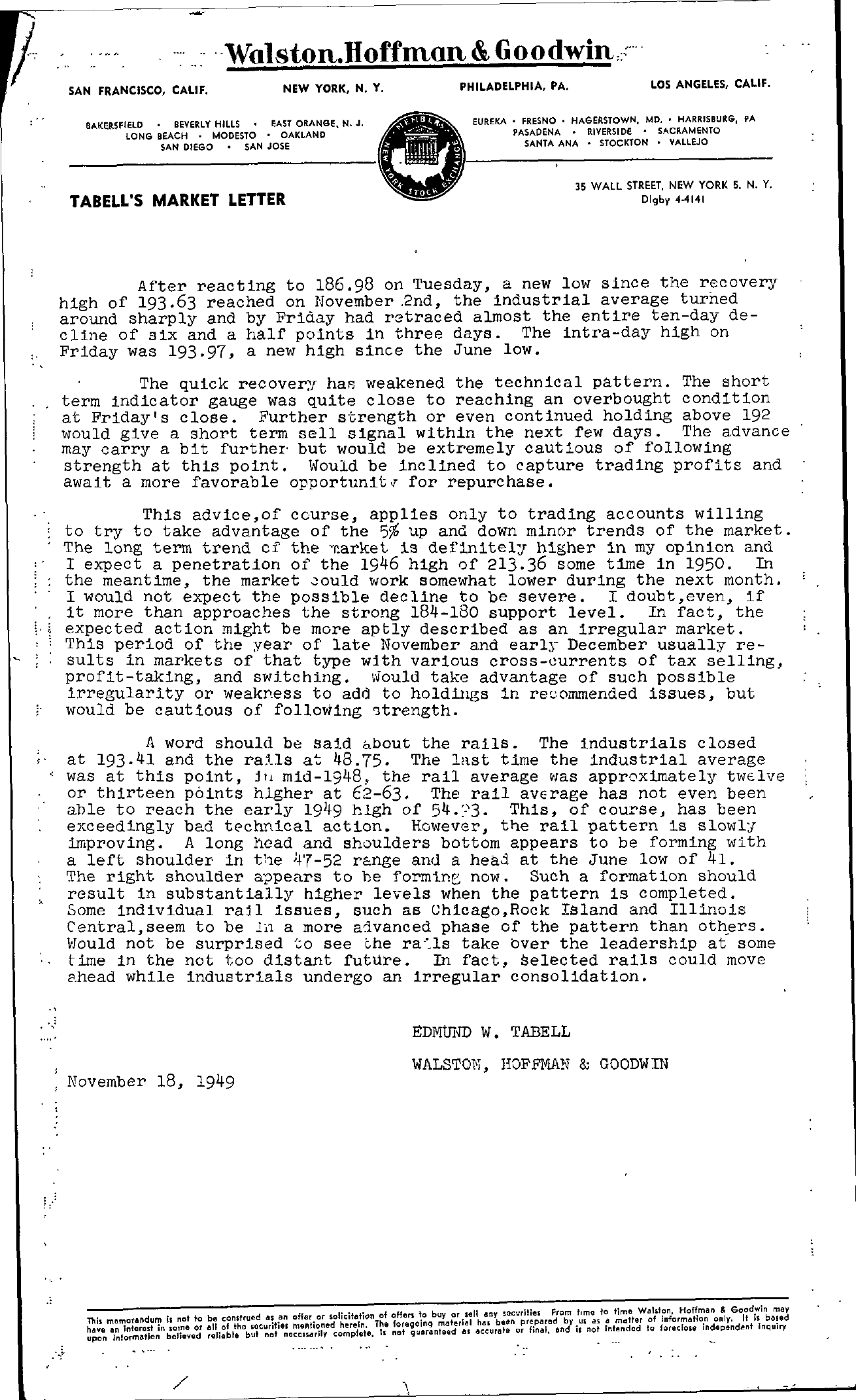 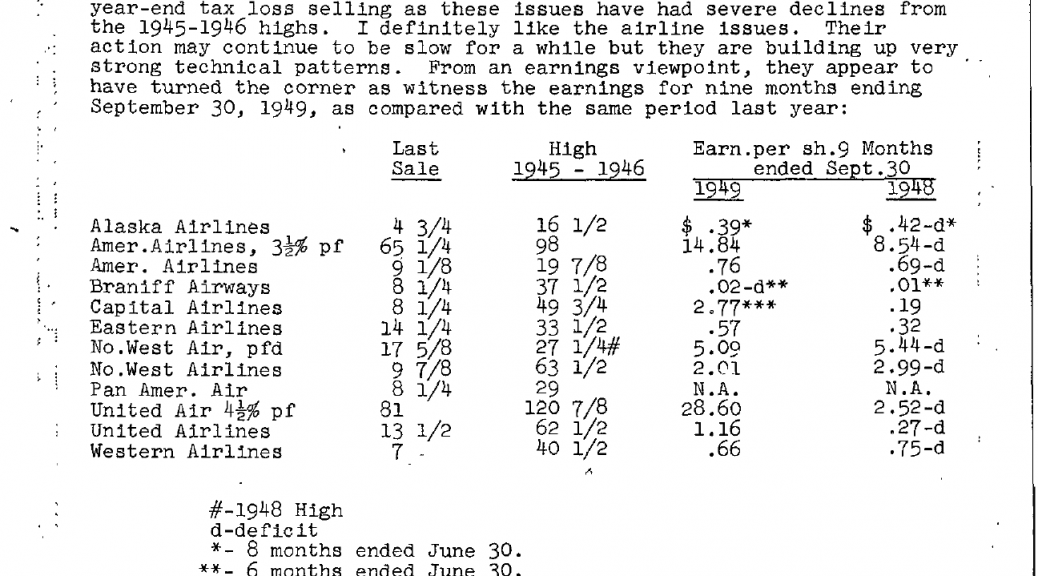 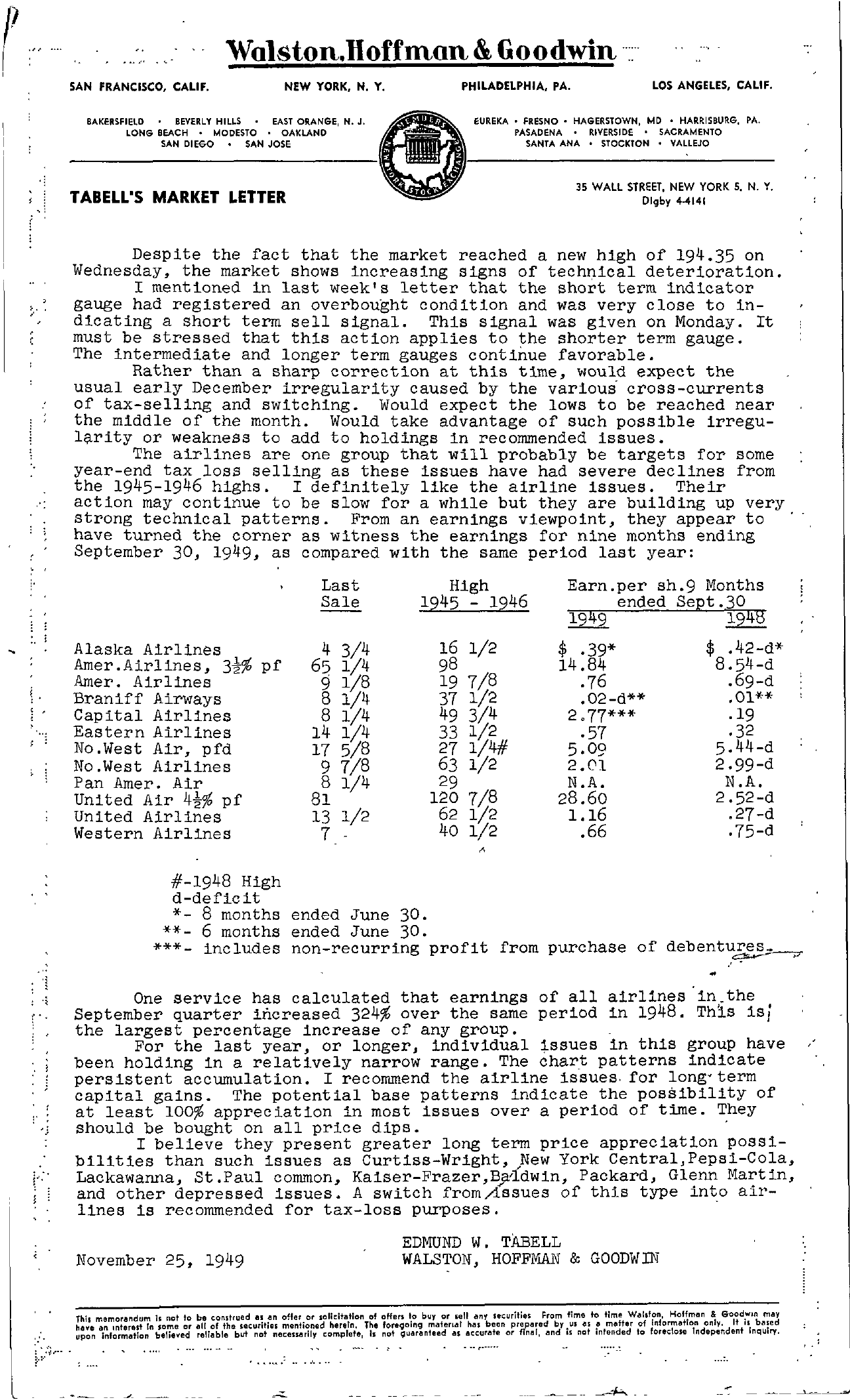 TABEll'S MARKET LETTER 35 WALL STREET. NEW YORK 5. N. Y. Digby 4-4141 Despite the fact that the market reached a new high of 194.35 on Wednesday, the market shows increasing signs of technical deterioration. I mentioned in last week's letter that the short term indicator i, , gauge had registered an overbought condition and was very close to in dicating a short term sell signal. This signal was given on I'1onday. It must be stressed that this action applies to the shorter term gauge. The intermediate and longer term gauges continue favorable. Rather than a sharp correction at this time, would expect the usual early December irregularity caused by the various' cross-currents of tax-selling and switching. Would expect the lows to be reached near the middle of the month. Would take advantage of such possible irregu- larity or weakness to add to holdings in recommended issues. The airlines are one group that will probably be targets for some year-end tax loss selling as these issues have had severe declines from the 1945-1946 highs. I definitely like the airline issues. Their action may continue to be slow for a while but they are building up very strong technical patterns. From an earnings viewpoint, they appear to have turned the corner as witness the earnings for nine months ending September 30, 1949, as compared with the same period last year … , ' , ,, , Alaska Airlines AlTIer.Airlines, 3-t pf AlTIer. Airlines Braniff Airways Capital Airlines Eastern Airlines No.West Air, pfd No.West Airlines Pan Amer. Air United Air 4t pf United Airlines Western Airlines Last Sale 4 3/4 65 1/4 9 1/8 8 1/4 8 1/4 14 1/4 17 5/8 9 7/8 8 1/4 81 13 1/2 7. High 1945 – 1946 16 1/2 98 19 7/8 37 1/2 49 3/4 33 1/2 27 1/4 63 1/2 29 120 7/8 62 1/2 40 1/2 Earn.per sh.9 Months ended Se)2t.30 1949 1948 .39 14.84 .76 .02-d 2,77 .57 5.09 2.01 N.A. 28.60 1.16 .66 .42-d 8.54-d .69-d .01 .19 .32 5.44-d 2.99-d N.A. 2.52-d .27-d .75-d -1948 High d-deficit – 8 months ended June 30. – 6 months ended June 30. – includes non-recurring profit from purchase of debentu.re!-s-..—;7' ., ; . One service has calculated that earnings of all airlines in,the . September quarter increased 324 over the same period in 1948. This isi the largest percentage increase of any group. For the last year, or longer, individual issues in this group have /' been holding in a relatively narrow range. The chart patterns indicate persistent accumulation. I recommend the airline issues. for long-term , capital gains. The potential base patterns indicate the possibility of at least 100 appreciation in most issues over a period of time. They ,J should be bought on all price dips. . I believe they present greater long term price appreciation possi- bilities than such issues as Curtiss-Wright, flew York Central,Pepsi-Cola, j….. Lackawanna, St.Paul common, Kaiser-Frazer,Bldwin, Packard, Glenn Martin, and other depressed issues. A switch from Assues of thls type into alr- lines is recommended for tax-loss purposes. November 25, 1949 EDMUND W. TABELL WALSTON, HOFFMru & GOODWDI This memorandum Is not have an Interest In 50me to or be all construed III an of the securities offer or lolicitation of mentioned herein, The o'oHreer9l0tion9bumy atoernalelUhaasnybeseencurpirtieepsareFdrobmy.tuiJmell5 to time Walstn, Hof!man & Good;w,n may maHer of Information only. It IS based upon information believed reliable but not necessarily complete, Is not c;luarilnteed as accurilte or flnill, and u not Intended to foredole Independent Inquiry . . '. . . . . .., ….–.' .. . .'…. .. c…… – 1