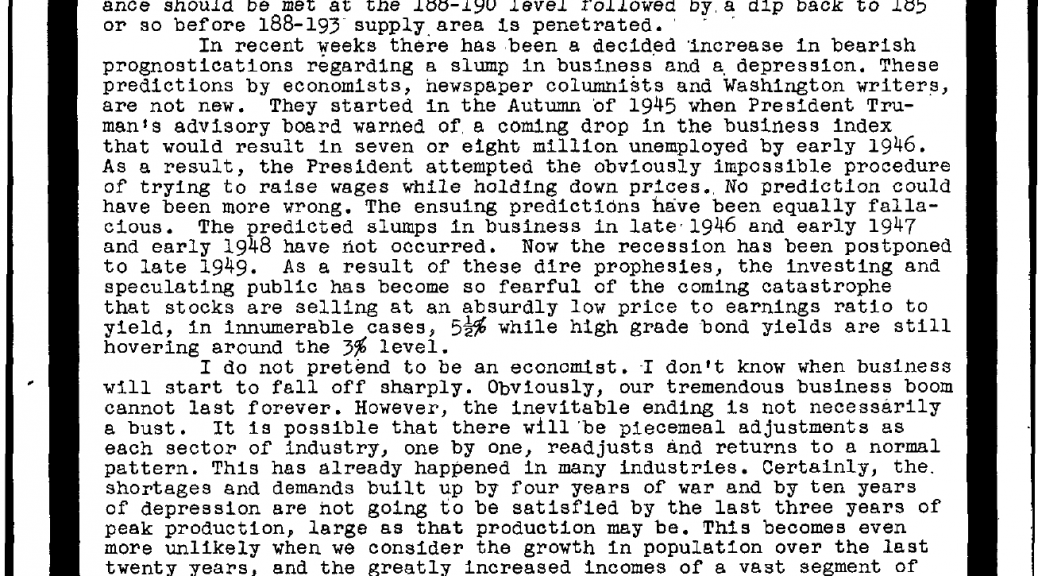 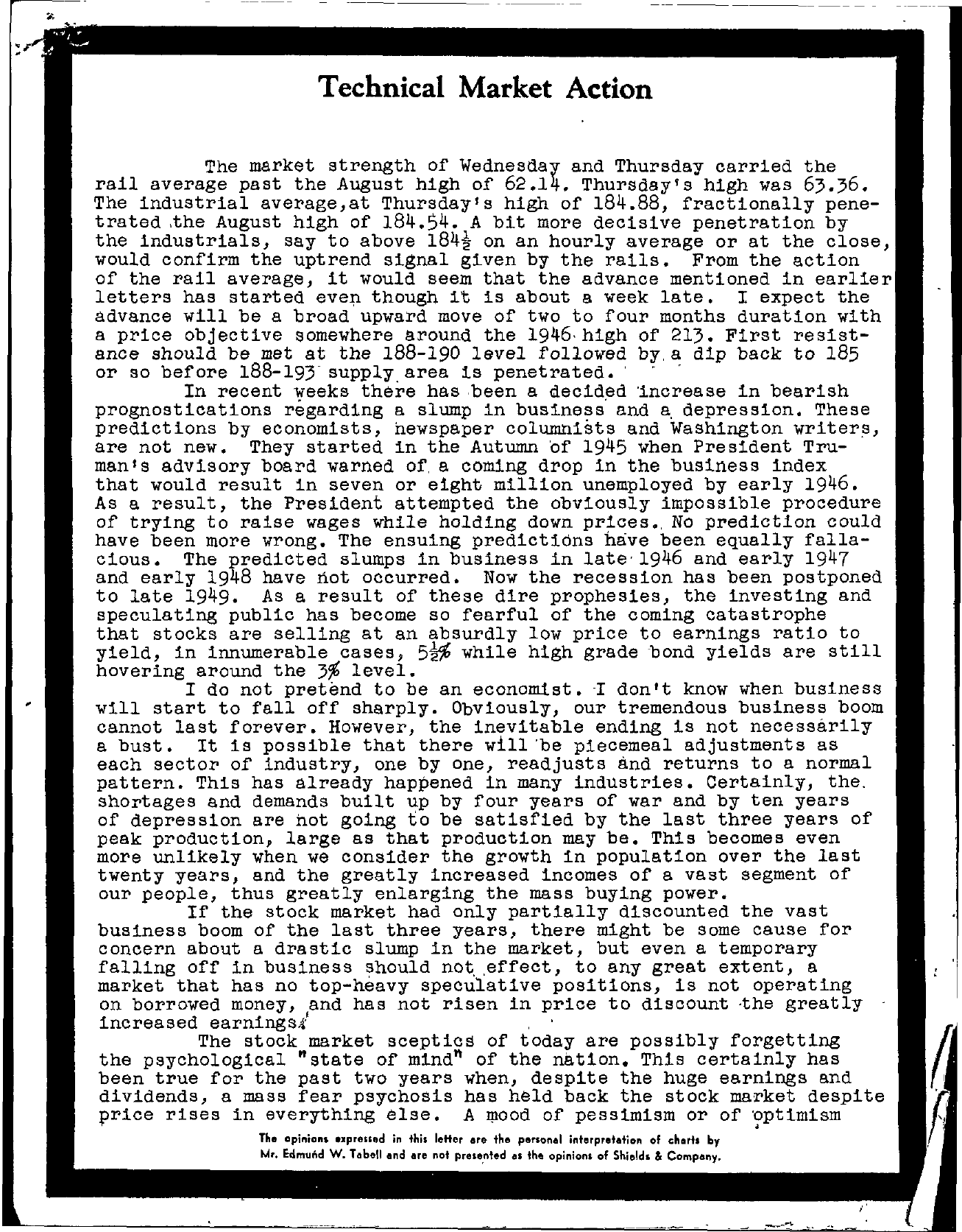 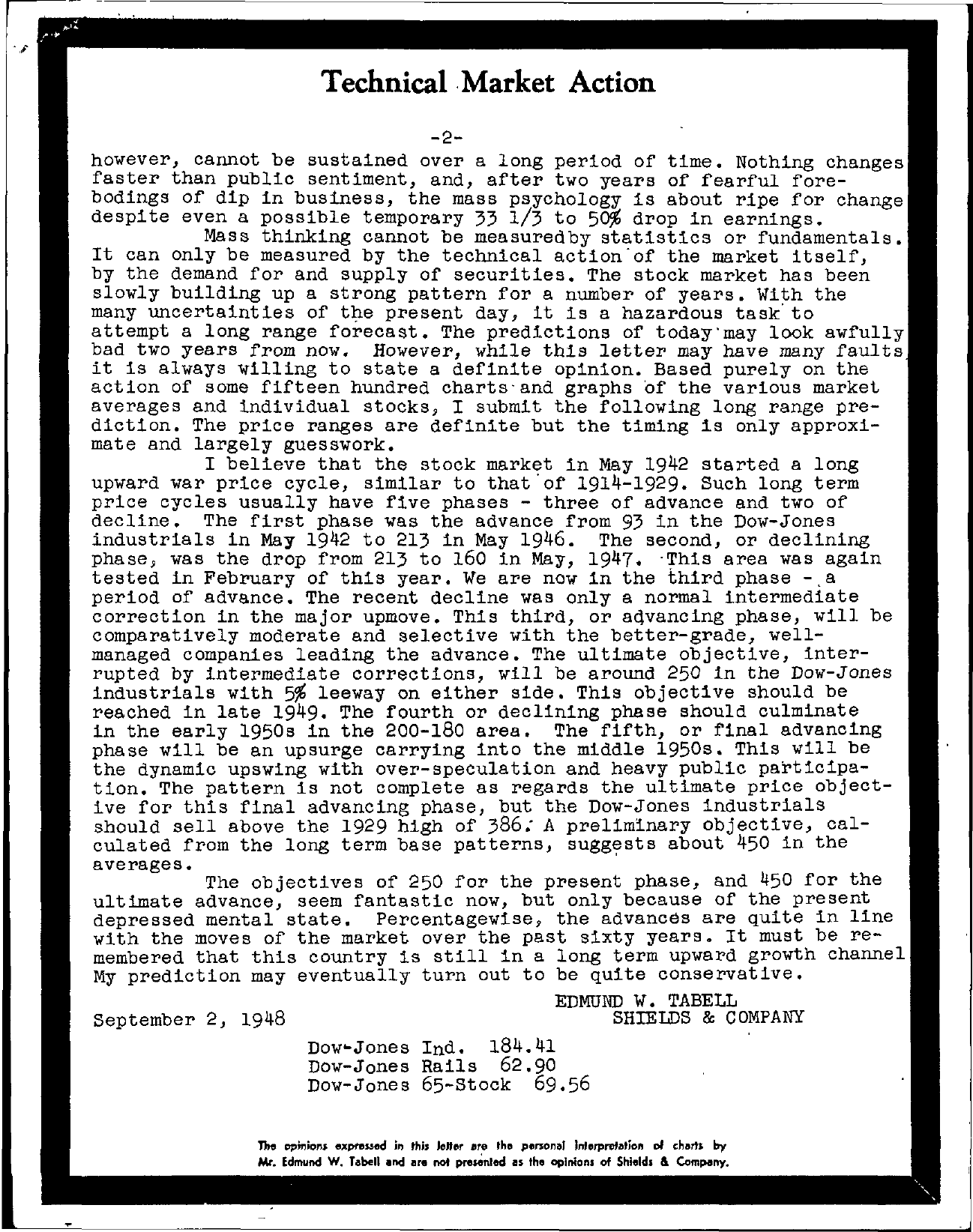 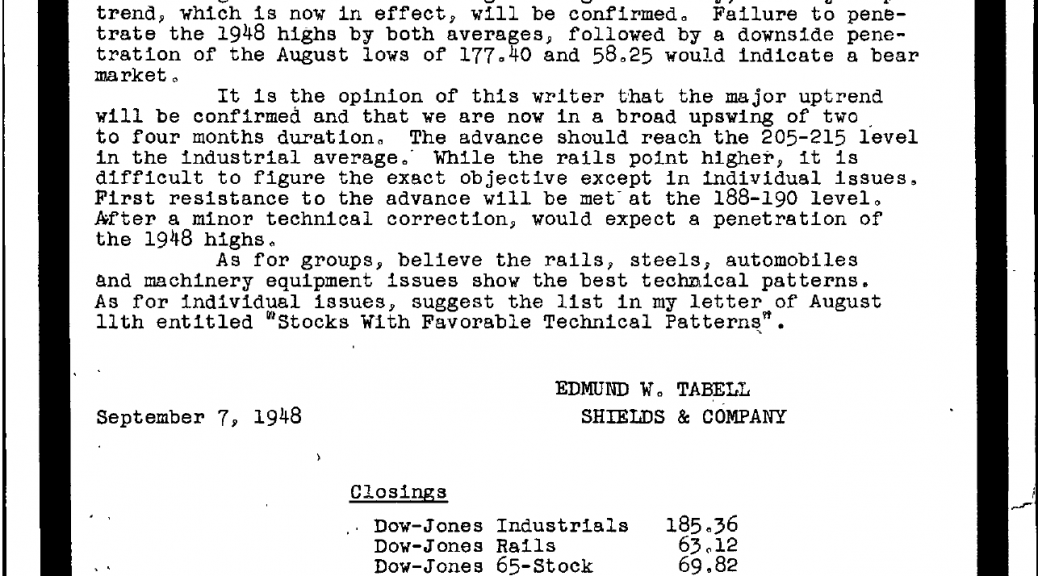 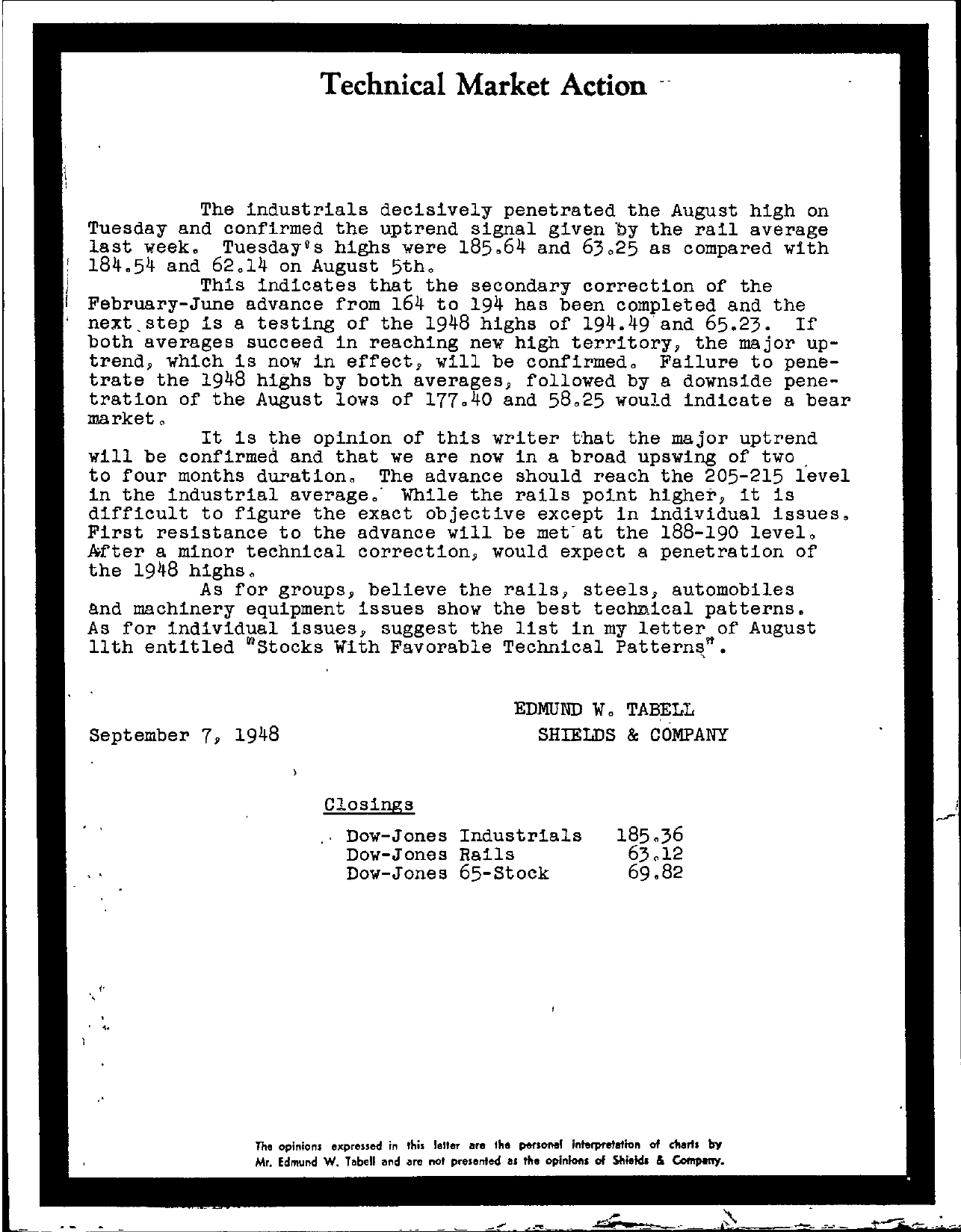 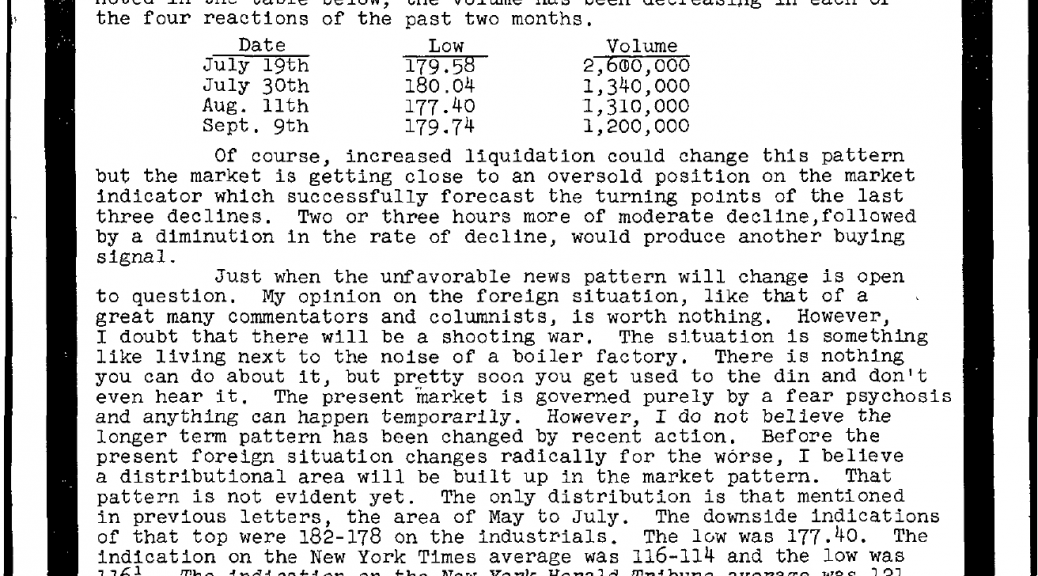 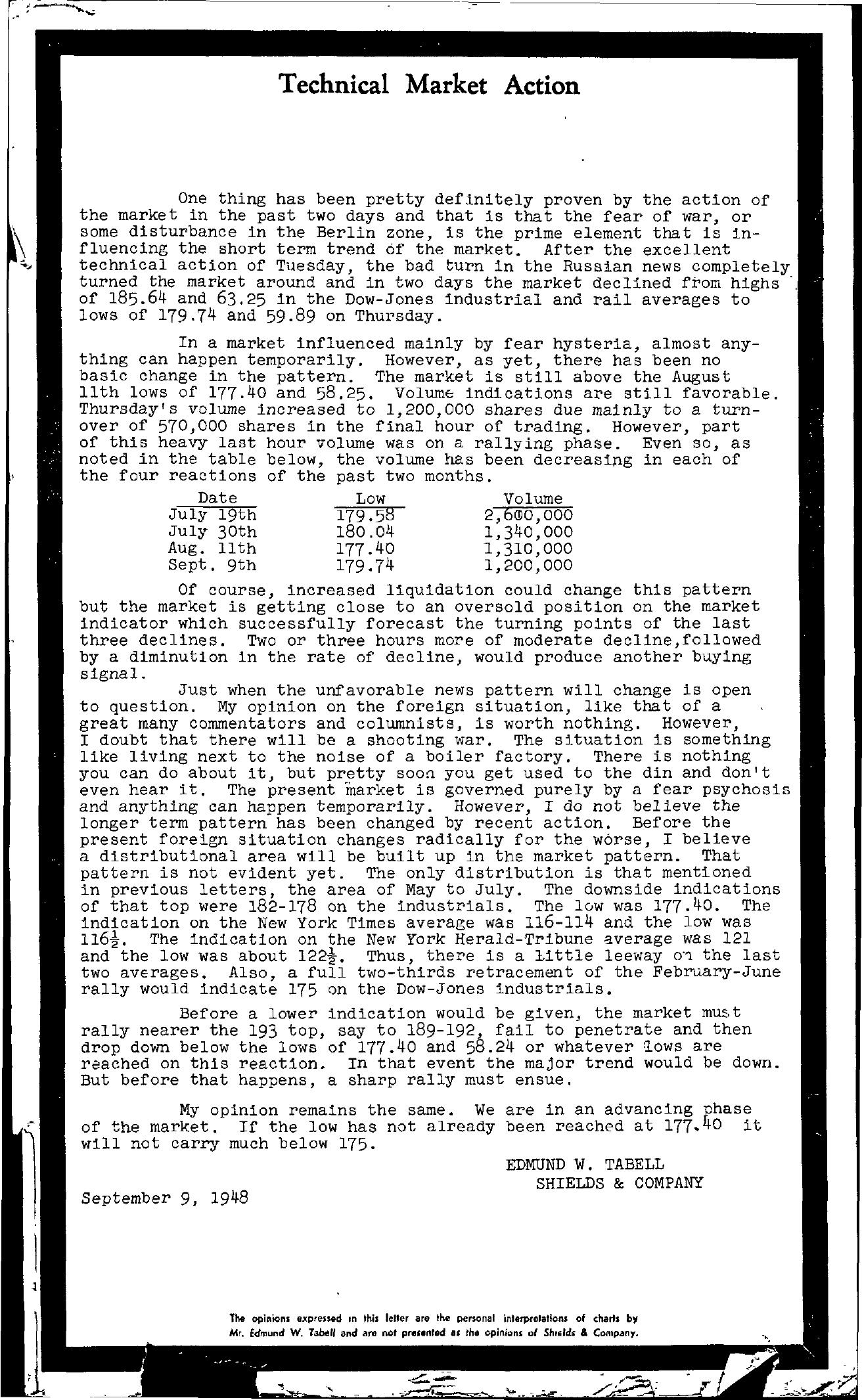 Technical Market Action One thing has been pretty definitely proven by the action of the market in the past two days and that is that the fear of war, or some disturbance in the Berlin zone, is the prime element that is influencing the short term trend of the market. After the excellent technical action of Tuesday, the bad turn in the Russian news completely turned the market around and in two days the market declined from highs of 185.6 and 63.25 in the Dow-Jones industrial and rail averages to lows of 179.7 and 59.89 on Thursday. In a market influenced mainly by fear hysteria, almost anything can happen temporarily. However, as yet, there has been no basic change in the pattern. The market is still above the August 11th lows of 177.0 and 58.25. Volum& indications are still favorable. Thursday's volume increased to 1,200,000 shares due mainly to a turn- over of 570,000 shares in the final hour of trading. However, part of this heavy last hour volume was on a rallying phase. Even so, as noted in the table below, the volume has been decreasing in each of the four reactions of the past two months. Date July 19th July 30th Aug. 11th Sept. 9th Low 179.58 180.0 177.0 179.7 Volume 2,6(J)0,000 1,30,000 1,310,000 1,200,000 Of course, increased liquidation could change this pattern but the market is getting close to an oversold position on the market indicator which successfully forecast the turning points of the last three declines. Two or three hours more of moderate decline,followed by a diminution in the rate of decline, would produce another buying signal. Just when the unfavorable news pattern will change is open to question. My opinion on the foreign situation, like that of a great many commentators and columnists, is worth nothing. However, I doubt that there will be a shooting war. The sHuation is something like living next to the noise of a boiler factory. There is nothing you can do about it, but pretty soon you get used to the din and don't even hear it. The present market is governed purely by a fear psychosis and anything can happen temporarily. However, I do not believe the longer term pattern has been changed by recent action. Before the present foreign situation changes radically for the worse, I believe a distributional area will be built up in the market pattern. That pattern is not evident yet. The only distribution is that mentioned in previous letters, the area of May to July. The downside indications of that top were 182-178 on the industrials. The low was 177.0. The indication on the New York Times average was l16-11 and the low was 116. The indication on the New York Herald-Tribune average was 121 and the low was about 122. Thus, there is a l,ittle leeway en the last two averages. Also, a full two-thirds retracement of the February-June rally would indicate 175 on the Dow-Jones industrials. Before a lower indication would be given, the market mu,t rally nearer the 193 top, say to 189-192, fail to penetrate and then drop down below the lows of 177. O and 58. 2 or whatever 'lows are reached on this reaction. In that event the major trend would be down. But before that happens, a sharp rally must ensue. My opinion remains the same. We are in an advancing phase of the market. If the low has not already been reached at 177.40 it will not carry much below 175. EDMUND W. TABELL September 9, 198 SHIELDS & COMPANY The opinionl expreued In this leiter are tke personal interpretations of charts by Mr. Edmund W. Tab4! and are not pres.nted as the opinions 01 SI'IIelds & Company. 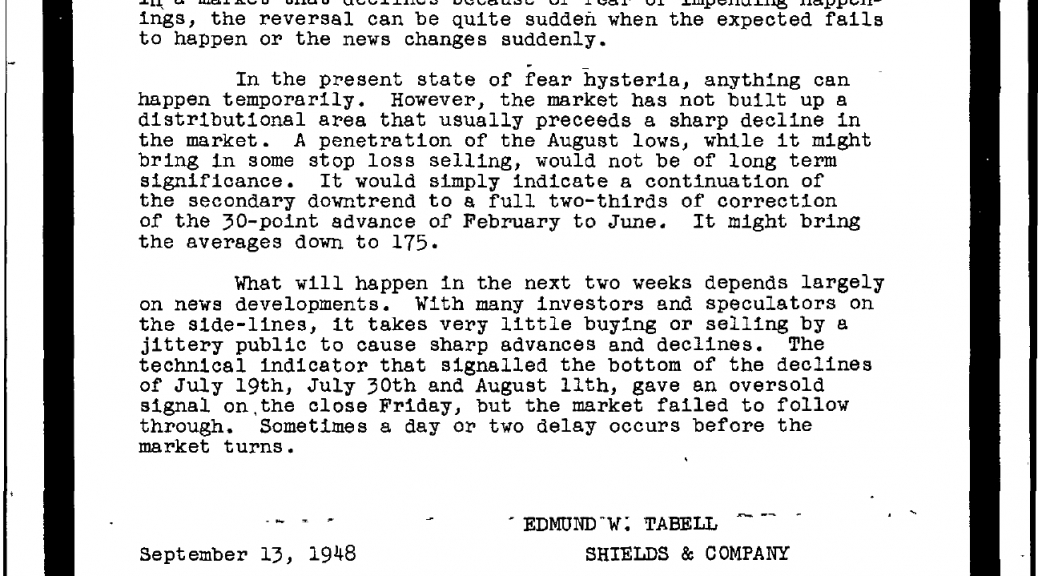 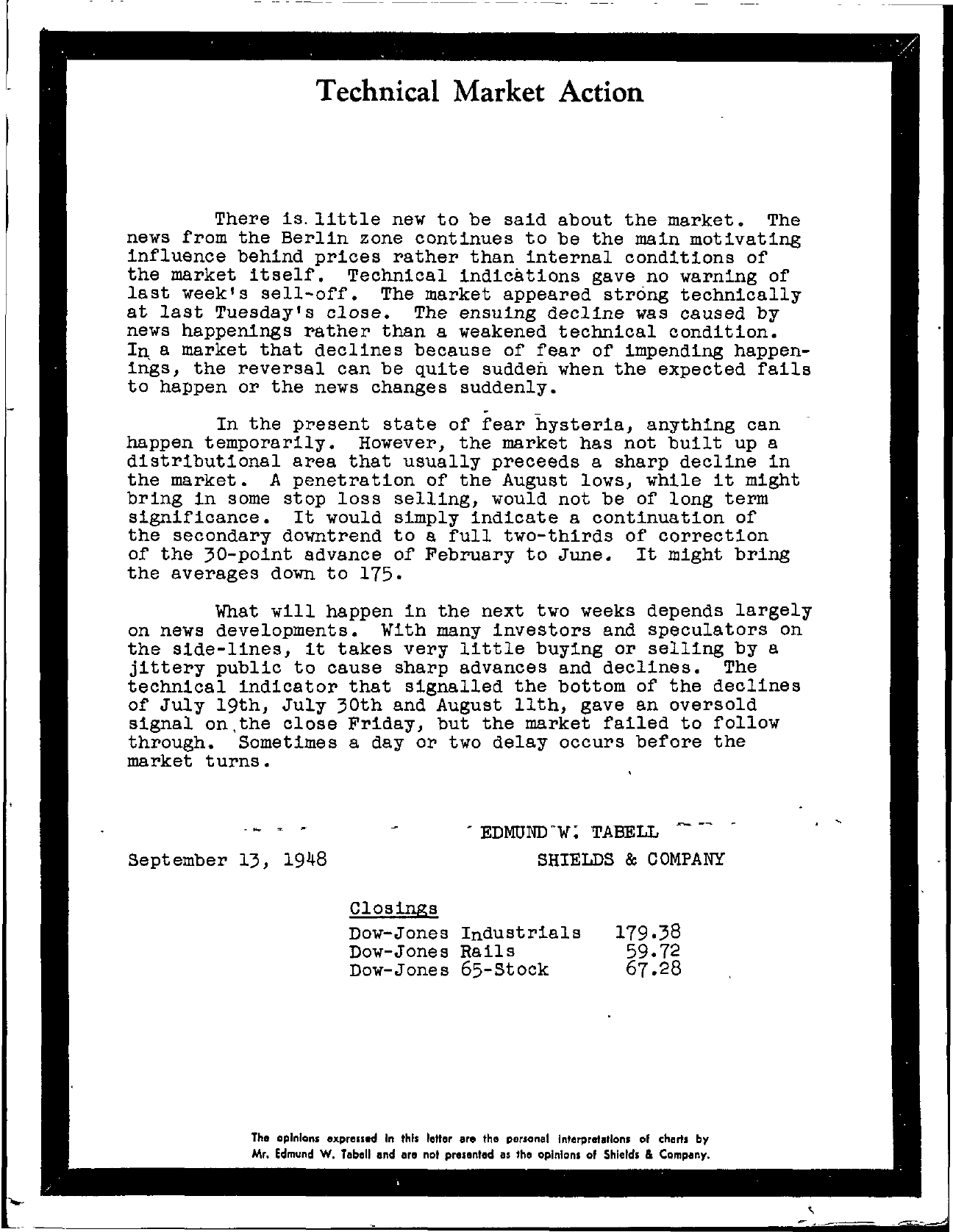 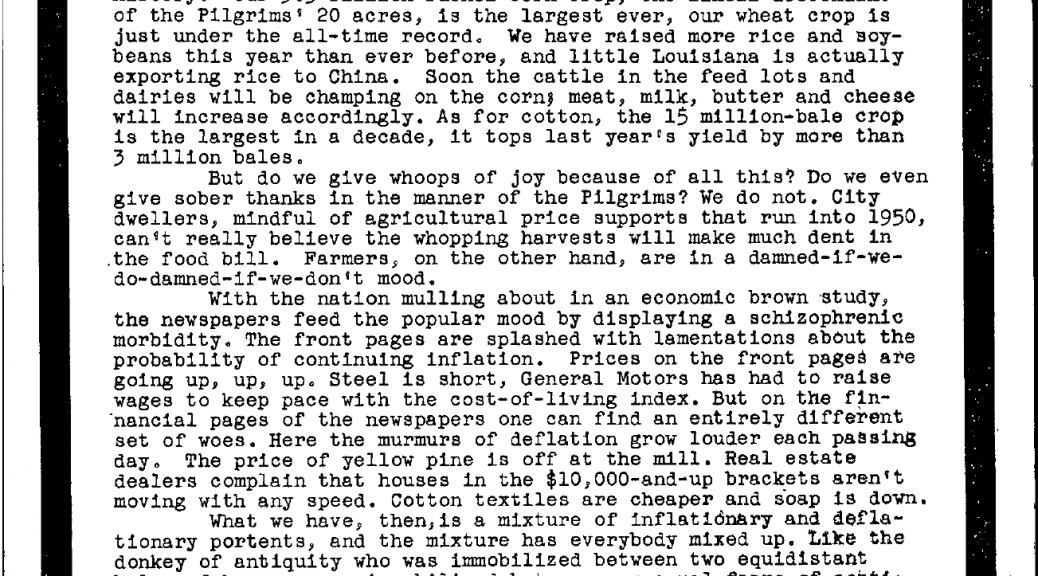 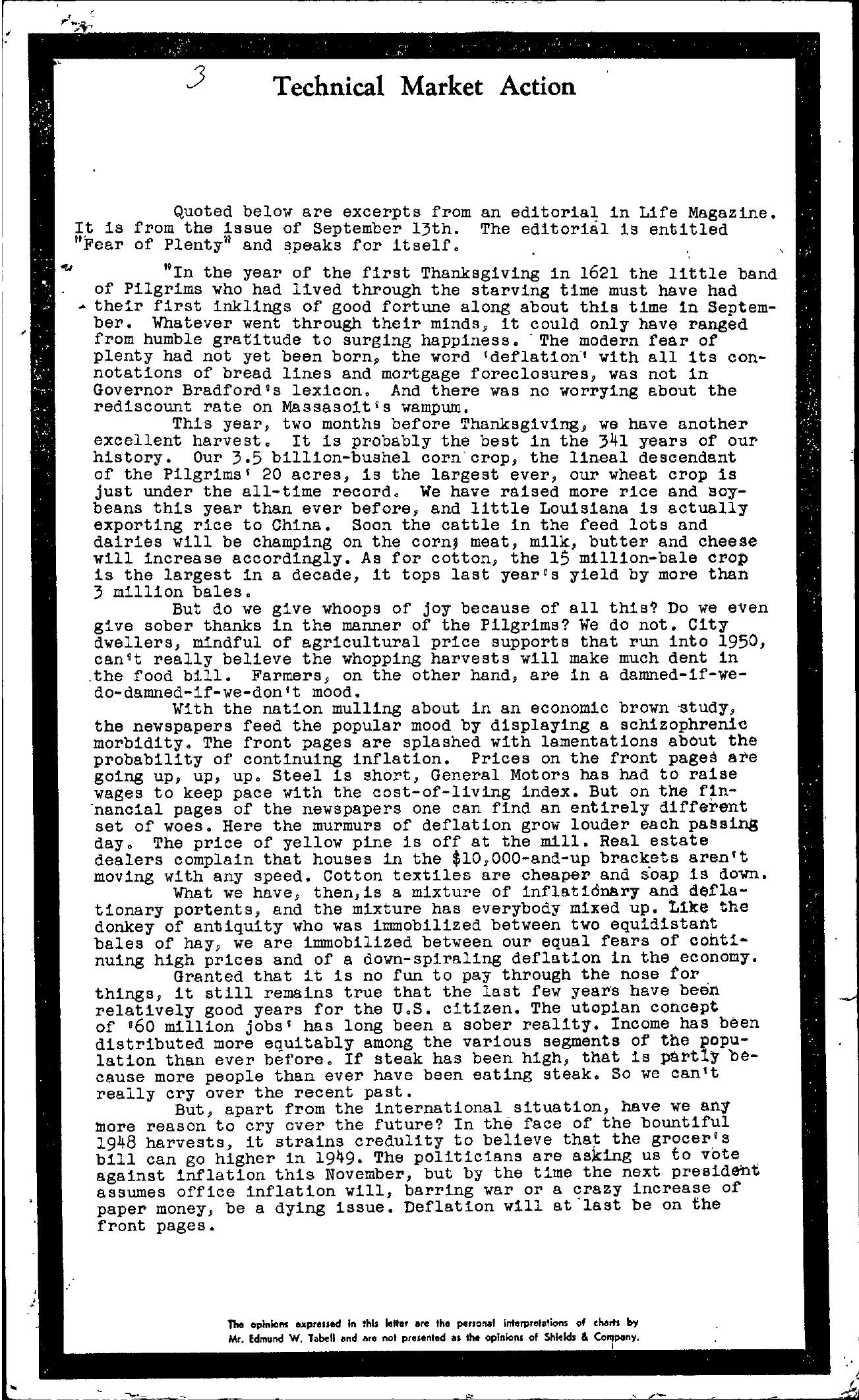 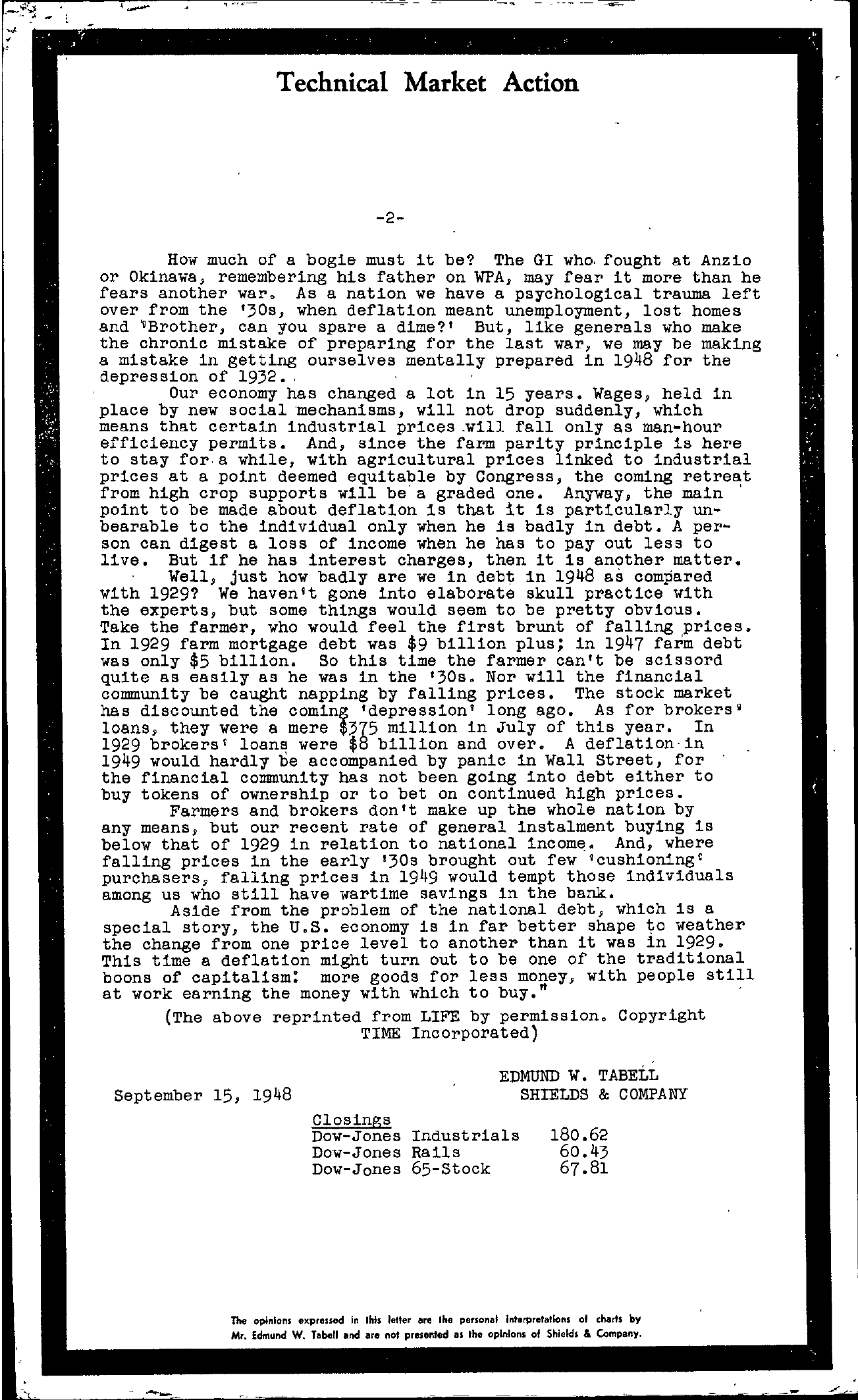 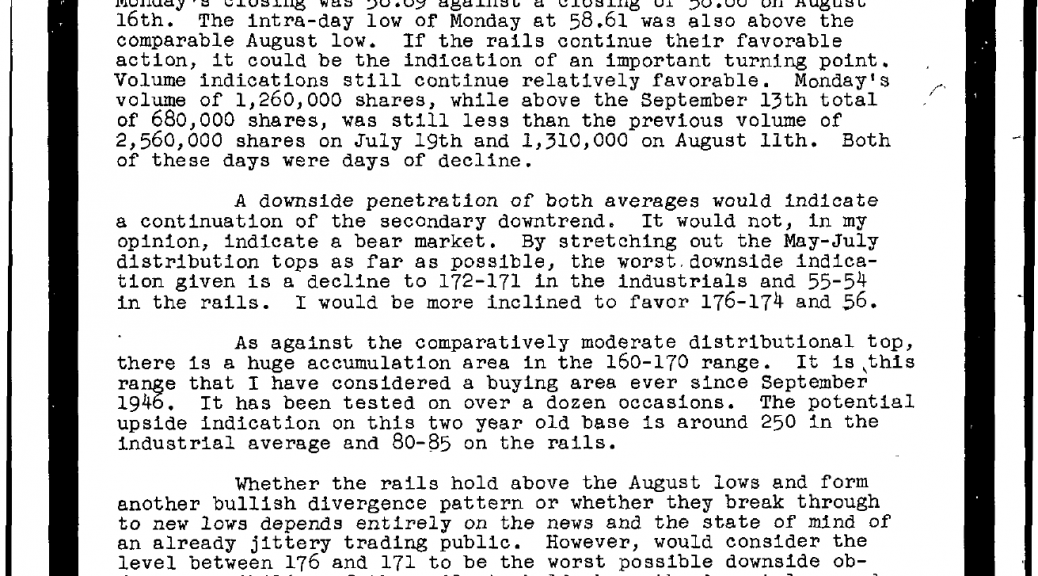 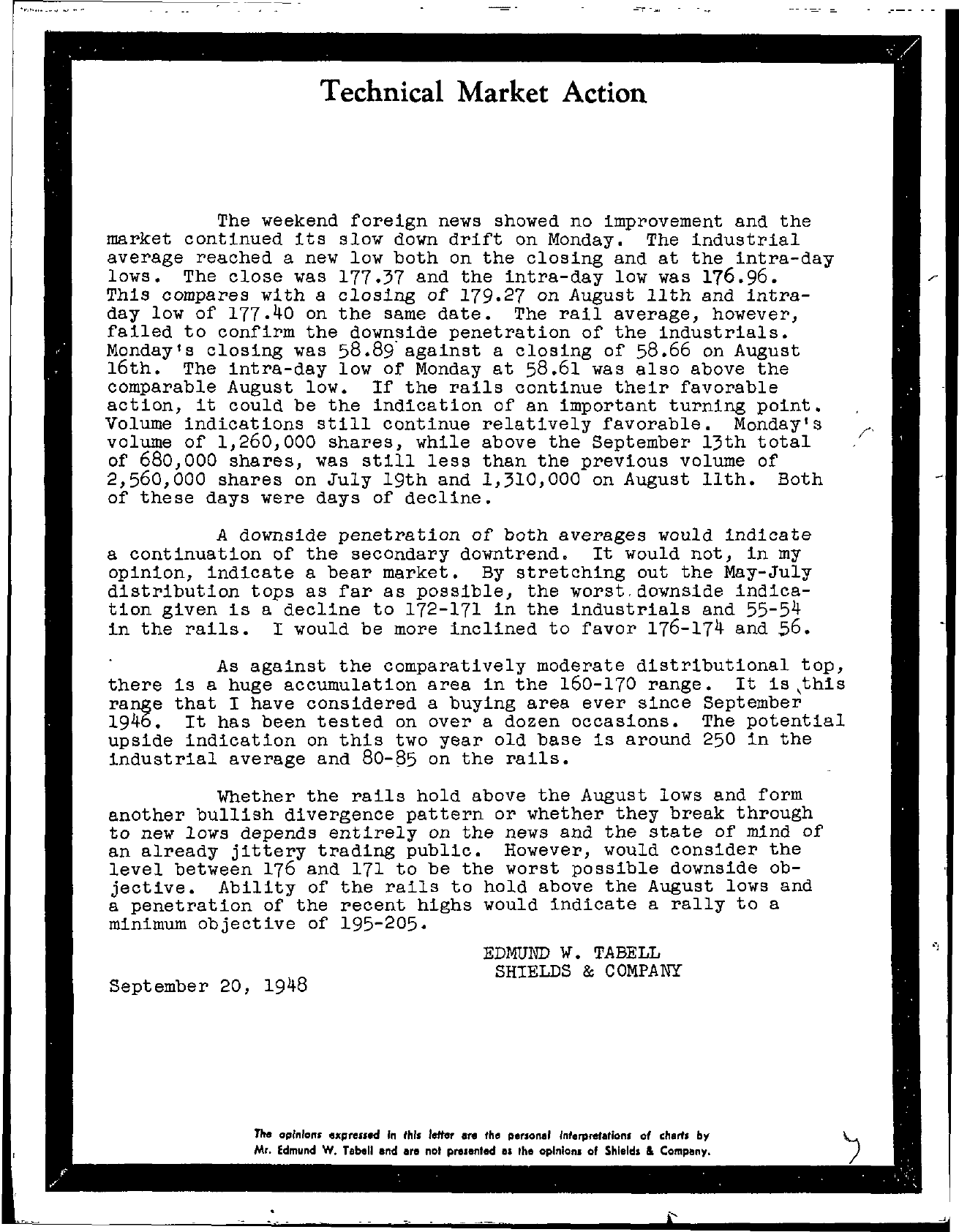 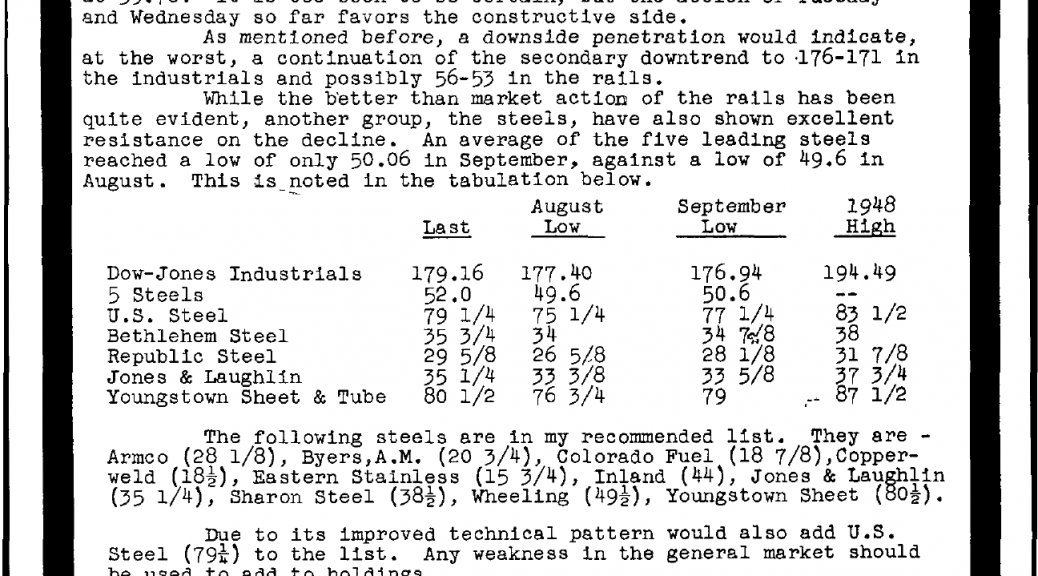 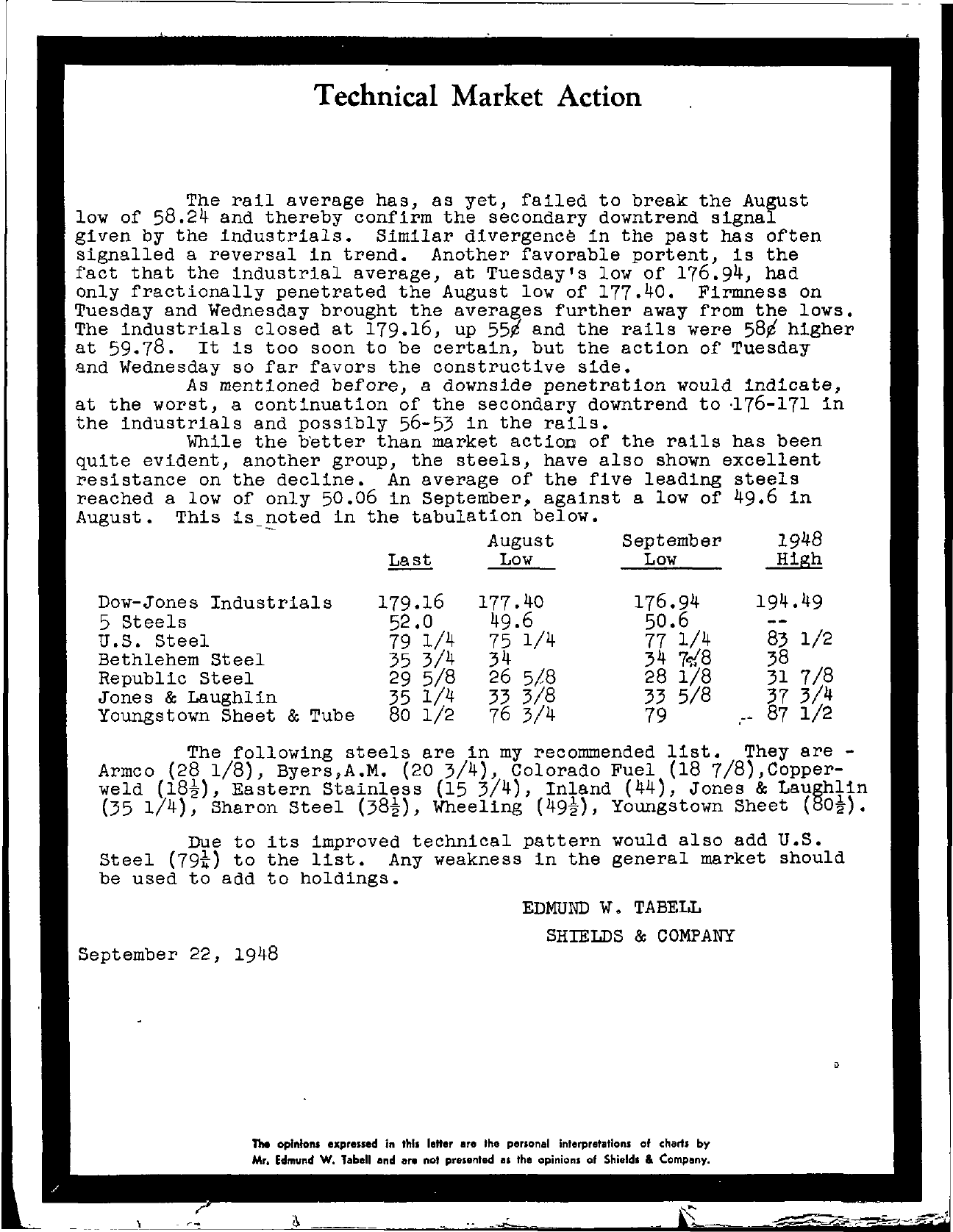 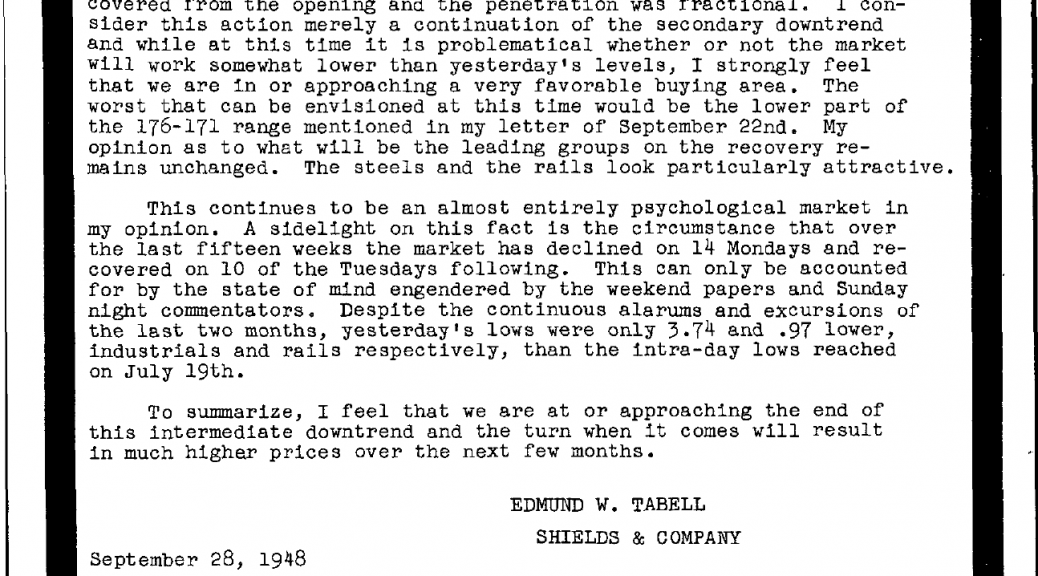 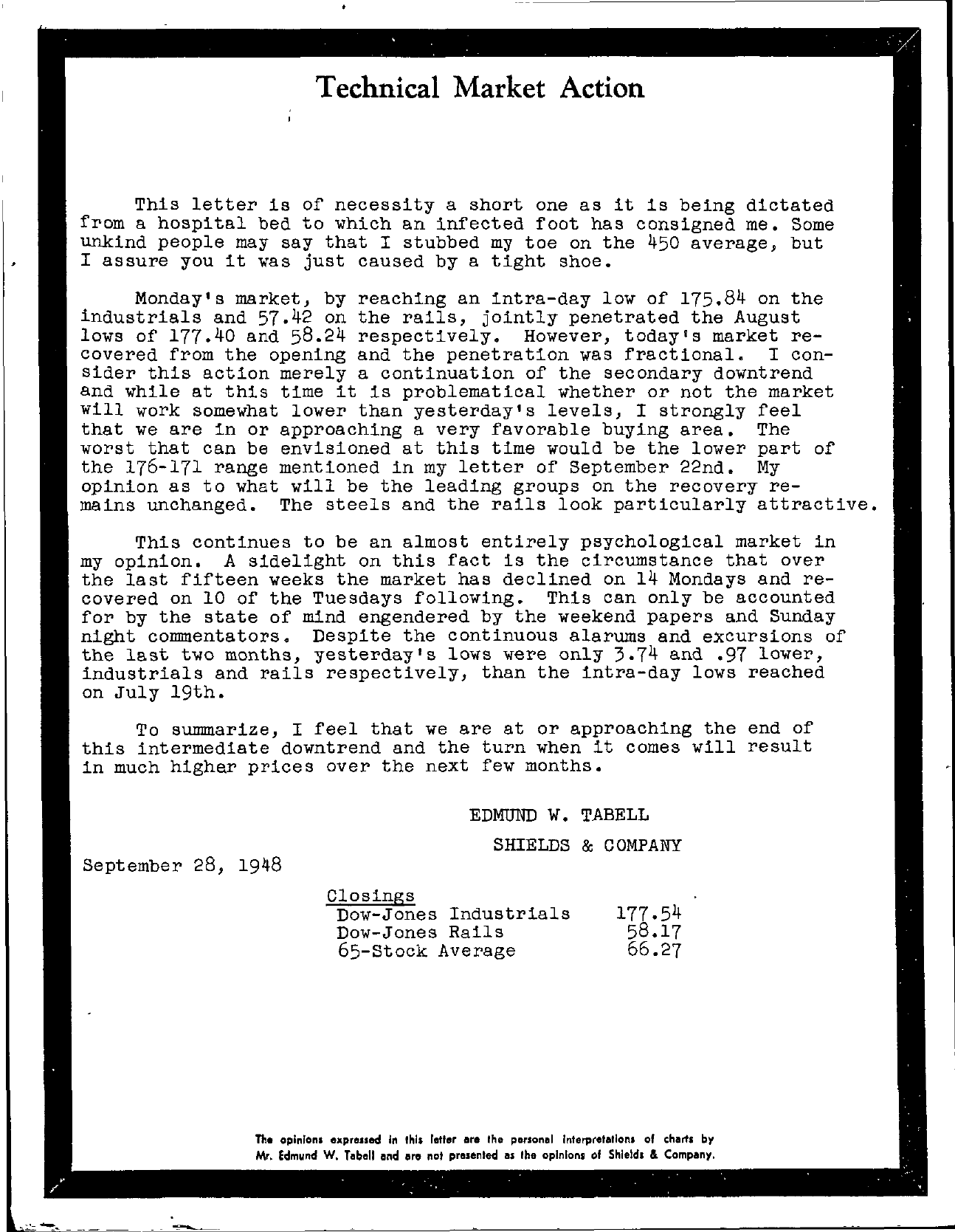